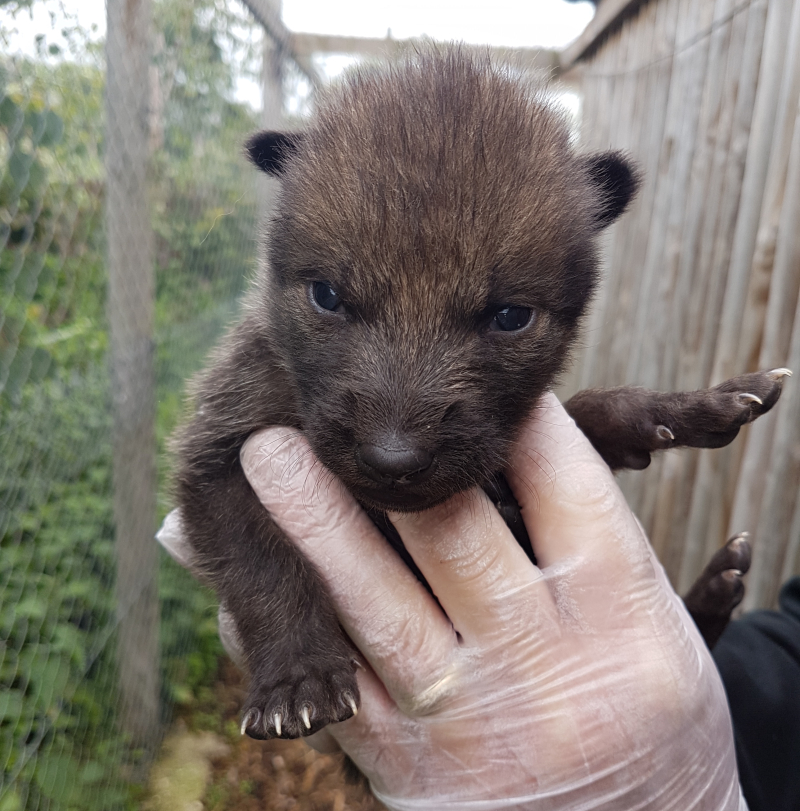 On May 3rd, Wingham Wildlife Park welcomed their first ever European Wolf pups. Wolves have been part of Wingham Wildlife Park since 2013, when Dakota (the mother of this litter of pups) and her sister Arya arrived at the UK from Parc Animalier de Sainte Croix in France, to be joined later in 2015 by male, Raksha, from Bern Zoo in Switzerland.

The new litter of four pups is a first for Dakota. However, having grown up in a fairly large pack in Sainte Croix, she is used to the mechanics of what should be done and how best to keep the litter healthy and safe, as Tony Binskin, the managing director of WWP explained: “We are really pleased with how she is doing with the pups. When animals have their first ever babies it can always be a bit of a worrying time. Do they know how to socialize them? Will they know how to make their own den? Will they know to use their artificial den if they don’t? There are so many variables which can potentially go wrong!”

Jackie Binskin, Tony’s wife finished by saying, “She really is a great mum though! So far, she has done nothing wrong, and as for how the pups are faring with here… The proof’s in the pudding – they look great.” 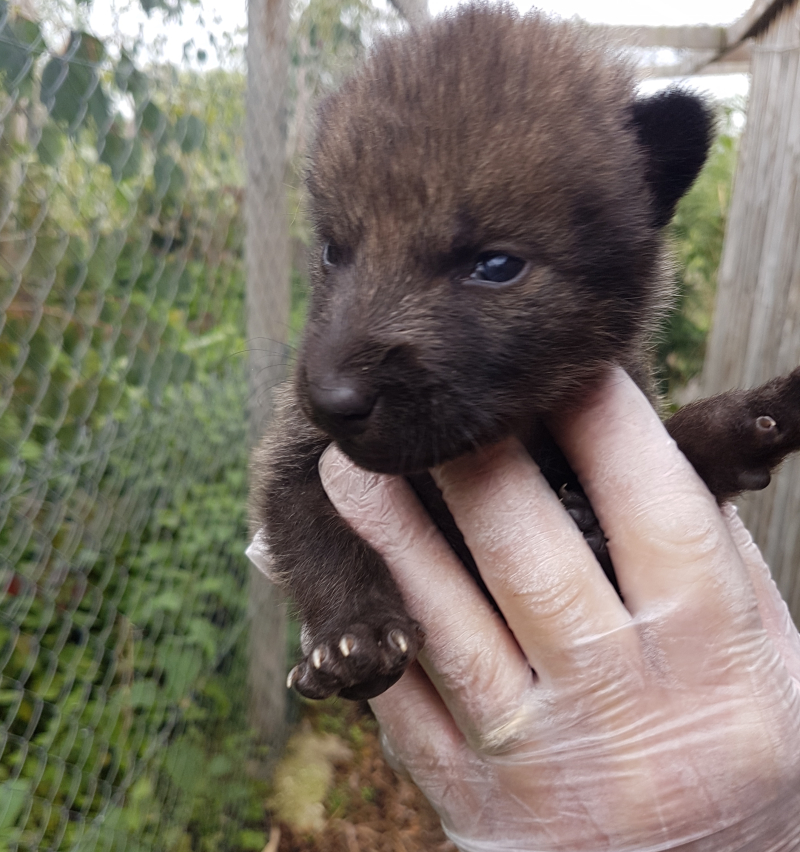 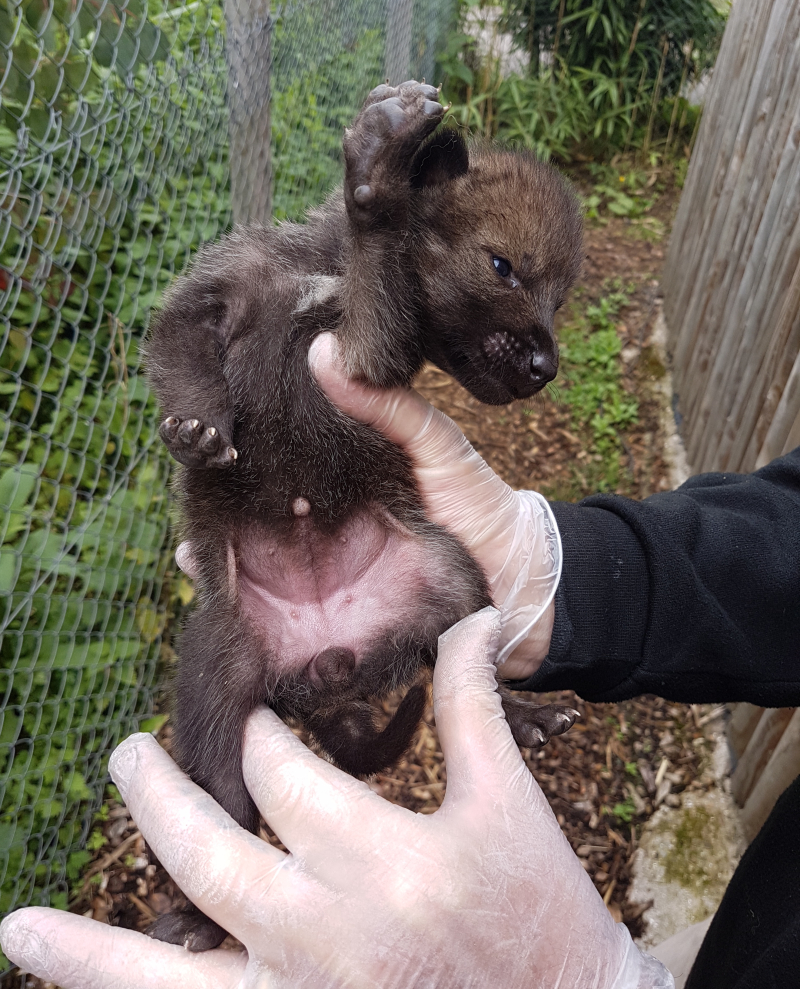 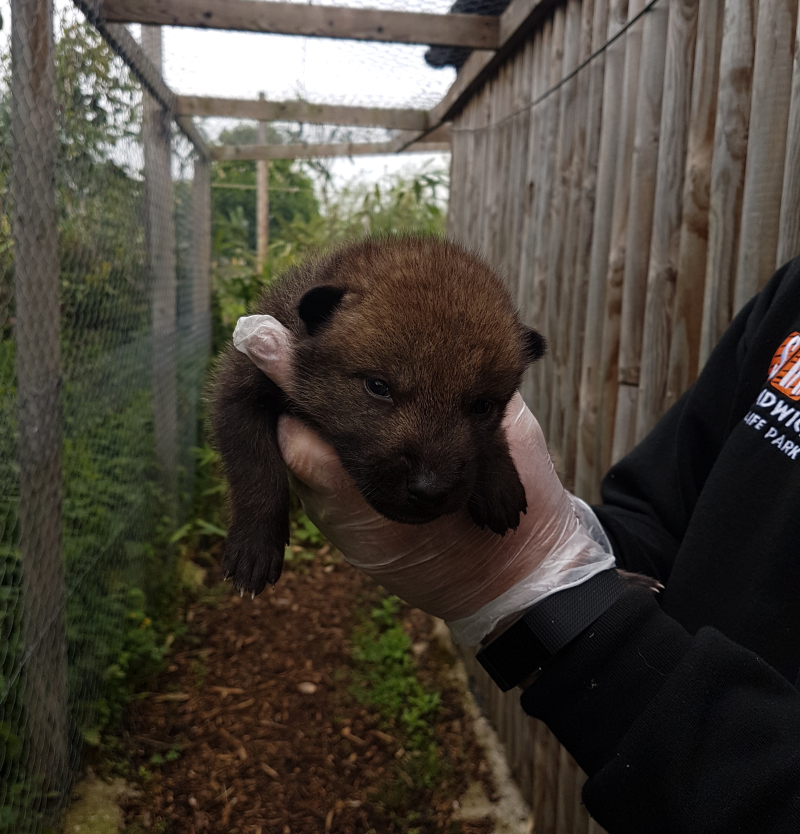 On the morning of May 13, the den, which Dakota had dug herself using a fallen over tree and its root system as a starting point and natural barrier, was inspected from a discrete distance by management staff at Wingham Wildlife Park.

The result of this inspection was a huge relief and surprise for the staff, as Tony explained; “Today was the clearest we have seen the pups so far. Before she had spent most of her time laying down with the pups huddle under her. In that position, we always only saw 3 but had our suspicions that there might be a 4th – after seeing the odd tail or foot hanging out which didn’t quite look right! Today however we saw all 4, clear as day.”

Markus Wilder, the parks curator interjected with; “…And to top it all off they all have their eyes open already and are moving around really well. When Dakota first made her den, it was quite shallow, but we can see now why she has been excavating it more – making it deeper and steeper. Whilst she is doing really well, it’s obviously also a bit of a learning curve for her!” 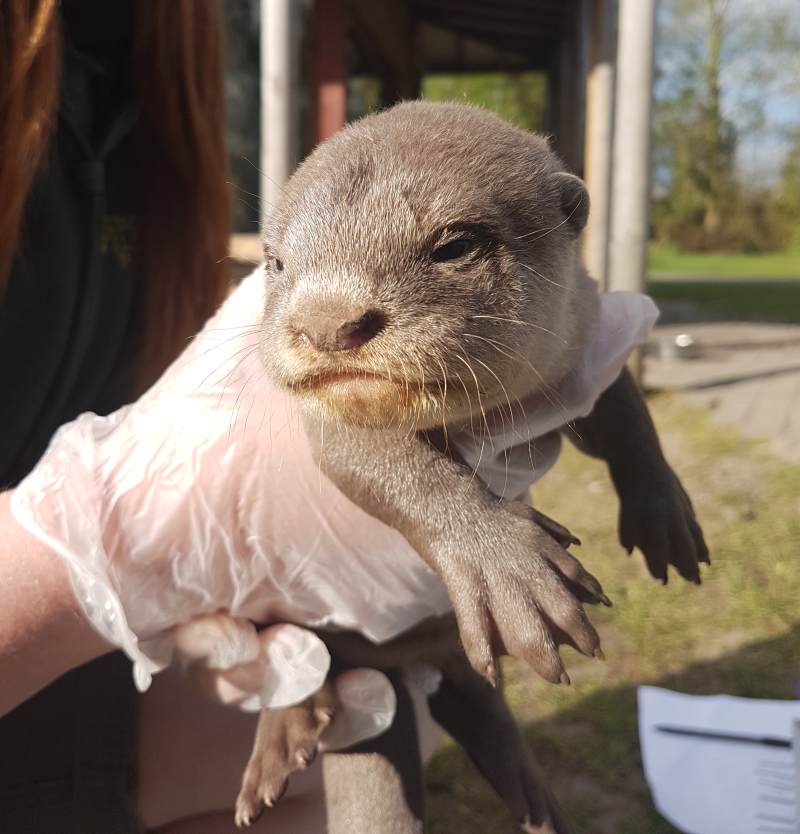 Pong is now almost seven-years-old, and this is her second litter of pups, with her first litter having been moved to other zoos in the UK, France and even the Czech Republic. Just like the last litter of pups, the father is nine-year-old Bob, whose birthday is just one day after the babies on March 17.

Bob was named by the park's Facebook followers, along with his other girlfriend, “Sheila”. Bob arrived at Wingham Wildlife Park in January 2013 from the Saigon Zoo & Botanical Gardens in Southern Vietnam.

At present, there are 17 males and 16 females in Europe, and with many of these coming from a single pair imported in to the UK from Cambodia several years ago (Pong’s parents), more individuals, which are at least half unrelated to the rest of the European population, is once again good to see.

The park looks forward to Bob hopefully breeding with Sheila in the future, who came from Zoo Negara in Malaysia which would give some completely unrelated offspring in the European genepool. With 10 of these individuals living at Wingham Wildlife Park at present, this gives the park the largest collection of Smooth-coated Otters in Europe.

Having babies is always very exciting for the staff at Wingham Wildlife Park, and the keepers for those animals are always very proud when the babies are born and are growing well and looking healthy. 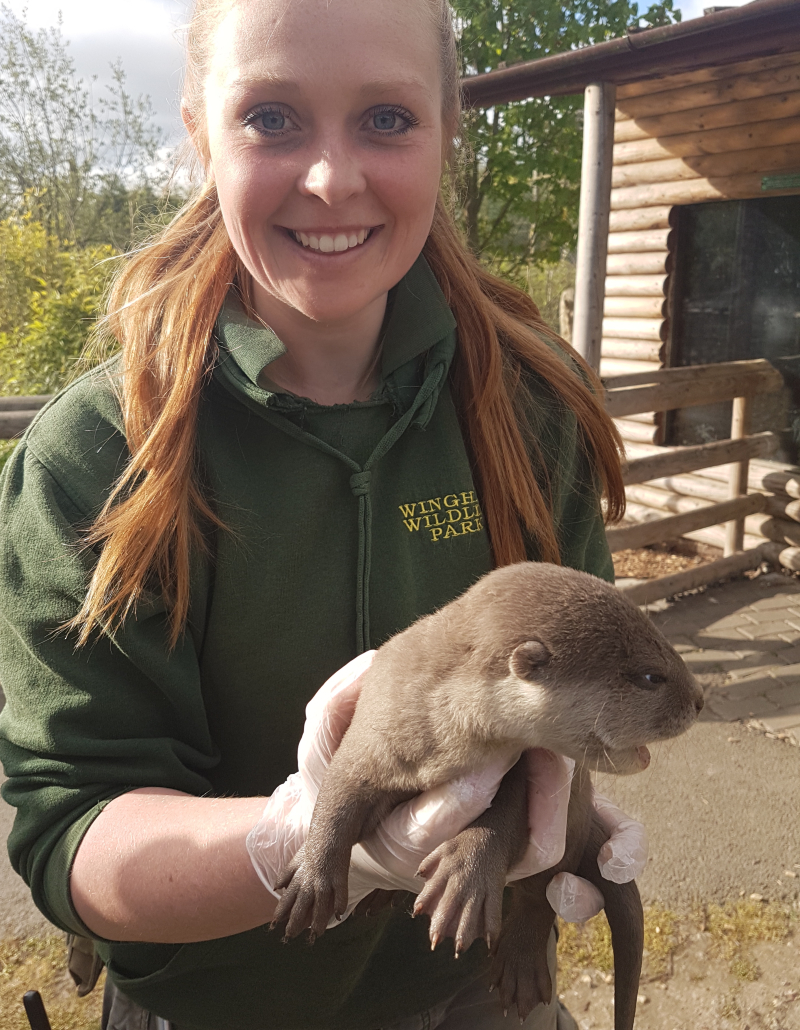 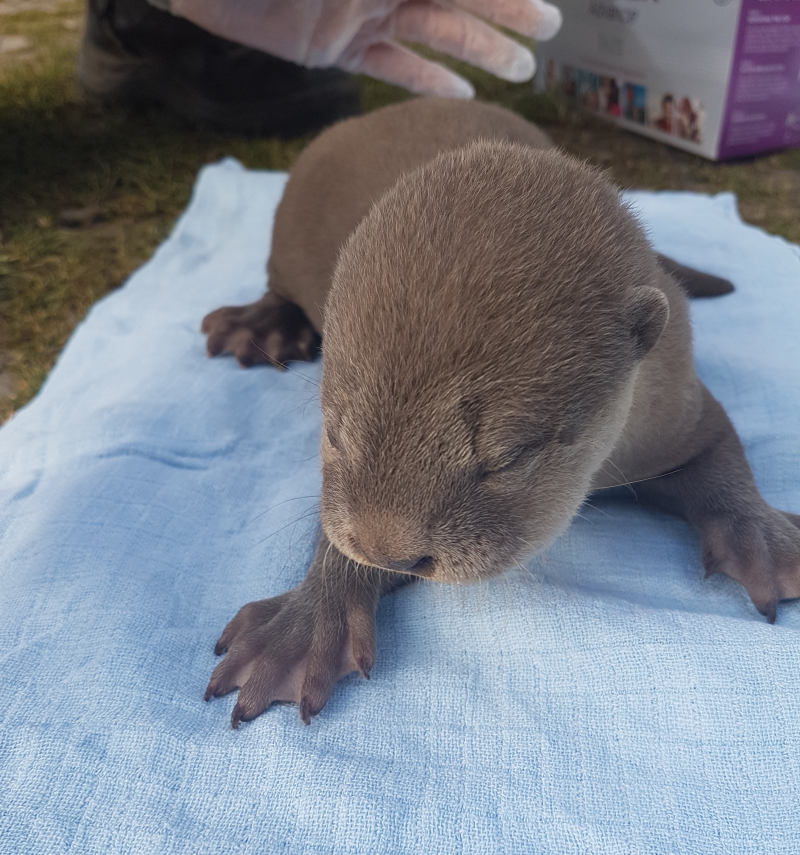 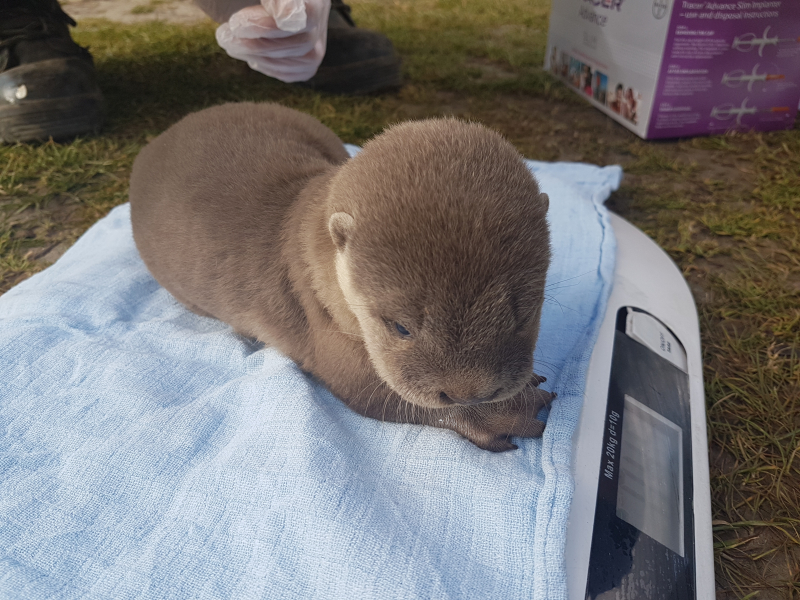 On April 13, the babies were removed for just a short time from Pong to allow the head of carnivores, head keeper, and curator of the park to weigh the pups, give them a visual health check, microchip them and find out what sex they are. In the end, it turned out that the babies consisted of two females and five males: making the sex ratio in Europe almost equal. At four-weeks-old, especially with one mum rearing seven hungry mouths, their weights came up between 390g and 500g, with most of them weighing just over 390g, with one extra hungry baby in the bunch.

Tony Binskin, the owner of Wingham Wildlife Park said of the arrival, “It has been a couple of years since we last had baby Otters, so this was a really nice sight to see! Even though this is quite a few mouths to feed, we know from past experience that Pong is a great mum, and have no worries about her.”

At four-weeks-old, they now all have their eyes open, however they are still far from independent so it will still be a little while before they start to venture outside. For now, they are spending all their time curled up in a tight ball of babies in their nest box, which Pong had been preparing for a few days before giving birth.

When the babies start to venture outside it will be an exciting time for the staff at the park, as Tony finished by saying: “Baby Otters are definitely some of the most interesting animals in the whole park. It is always a very tense moment however when mum first teaches the babies about the water, as she picks them up, one by one, and dunks them in the pond. Just like the babies, we’re always at the side of the enclosure for this experience, holding our breaths until the swimming lesson is over!”

The Smooth-coated Otter (Lutrogale perspicillata) is the only extant representative of the genus Lutrogale. This Otter species is found in most of the Indian Subcontinent and eastwards to Southeast Asia, with a disjunct population in Iraq. As its name indicates, the fur of this species is smoother and shorter than that of other Otters.

The Smooth-coated Otter is currently listed as “Vulnerable” on the IUCN Red List of Threatened Species. Their range and population are shrinking due to loss of wetland habitat, contamination of waterways by pesticides, and poaching.

Park staff encourages fans of the new pups to check their Facebook page for updates about when these beautiful animals will start to venture outside and make their public debut: https://www.facebook.com/WinghamWildlifePark 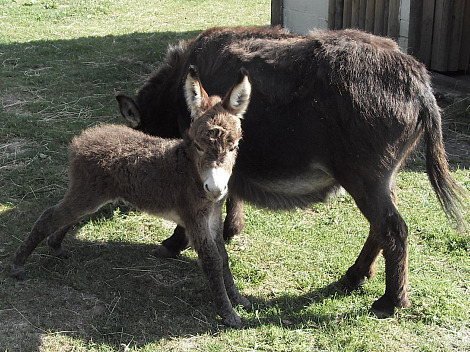 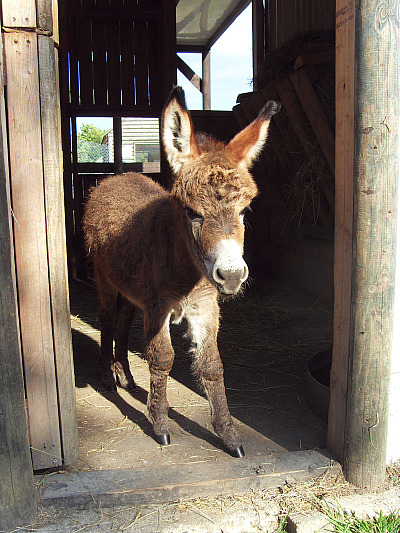 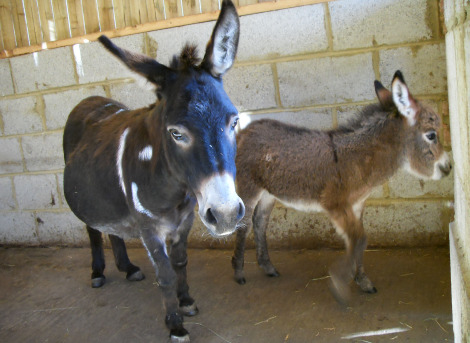