In March 2022, the Toledo Zoo announced the addition of Nuka after the Association of Zoos and Aquarium’s Species Survival Program (SSP) issued a breeding recommendation for Crystal in hopes of mating to sustain this endangered species. 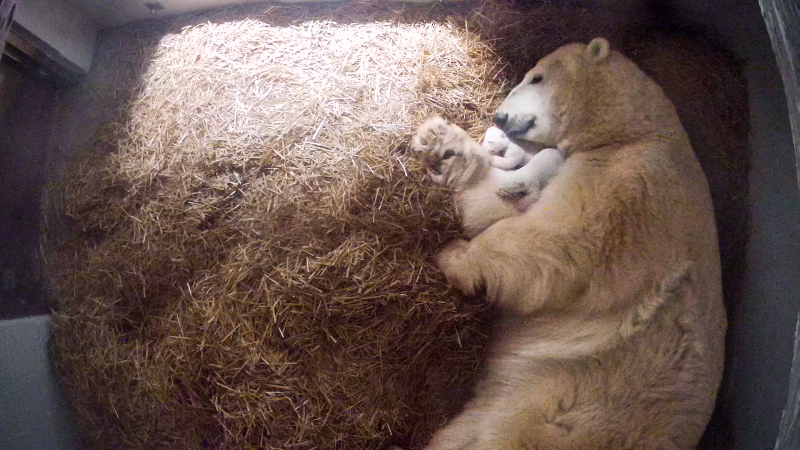 Ohio’s Toledo Zoo is tickled pink to share that eight Flamingo chicks have hatched at the Toledo Zoo this year!

The Flamingo chicks are fed six times a day with a diet consisting of fish, shrimp, egg yolks, baby rice cereal and water until they're fully weaned after two months. After one week of hatching, the chicks are exercised daily to ensure their legs develop properly. 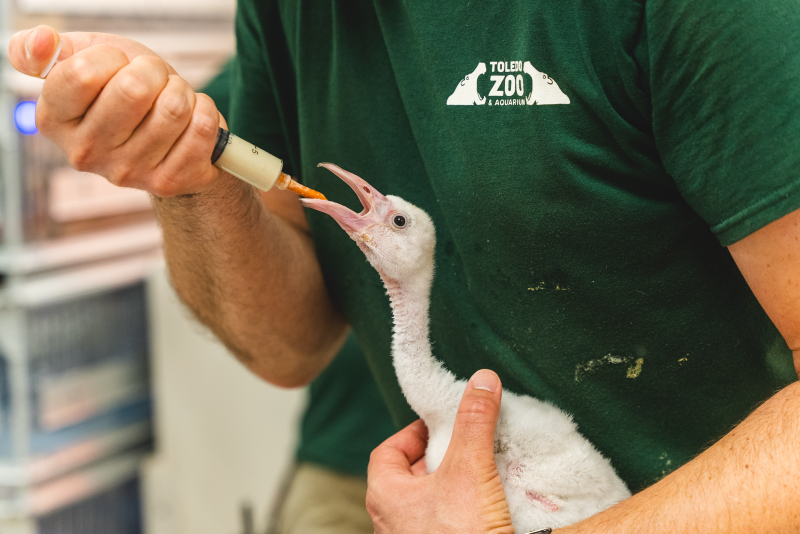 A pair of snow leopard cubs are currently on exhibit and can be seen every day the Toledo Zoo is open - both cubs are incredibly bold and rambunctious.

The zoo is also encouraging people to participate in a naming contest:

The two cubs were born on June 3 to mother Greta and father Shishir. Toledo Zoo are thrilled to have one boy and one girl, and can't wait to finally give them their names.

With a donation amount of your choice, you can cast your vote for your favorite cub names and help Toledo Zoo raise funds for their conservation efforts. 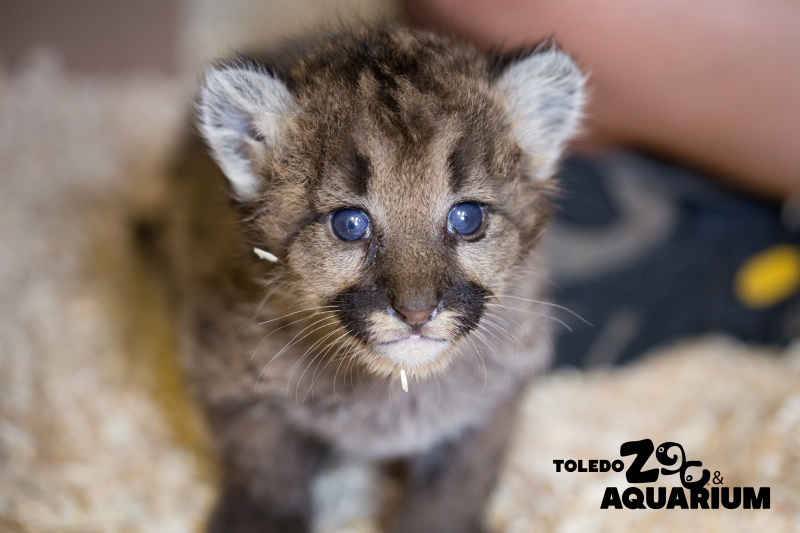 The cubs were all born in Washington state. The state of Washington’s Department of Fish and Wildlife reached out to the Association of Zoos and Aquariums (AZA) for help in finding the Cougar cubs new homes following the loss of their mothers. There is no information to post as to how the cubs became orphans, but, according to the Toledo Zoo, their plight is the result of "human-wildlife conflict".

Toledo Zoo staff recently made the trip to Washington to bring the cubs back to their facility.

Zoo officials stated that the elder of the cubs, named Rainier, is 10-12 weeks old. She is eating solid foods, weighs about ten pounds, and is from southeast Washington. Rainier has also taken on the coloring of an adult Cougar and lost her ‘baby stripes’.

The younger cubs, named Columbia and Cascade, are approximately three weeks old. They are still being bottle-fed by staff, weigh about 3.5 pounds each, and are from northeast Washington. These younger cubs are from a litter of four. The other two cubs in that litter were sent to a New Jersey zoo. 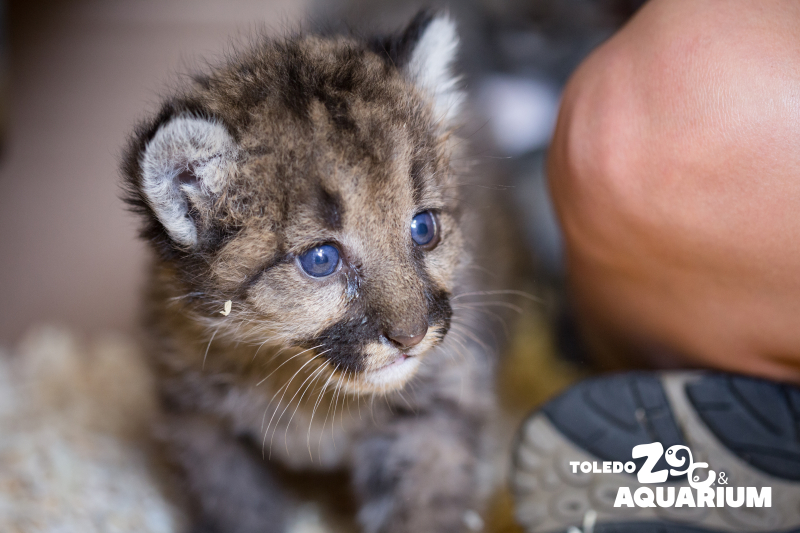 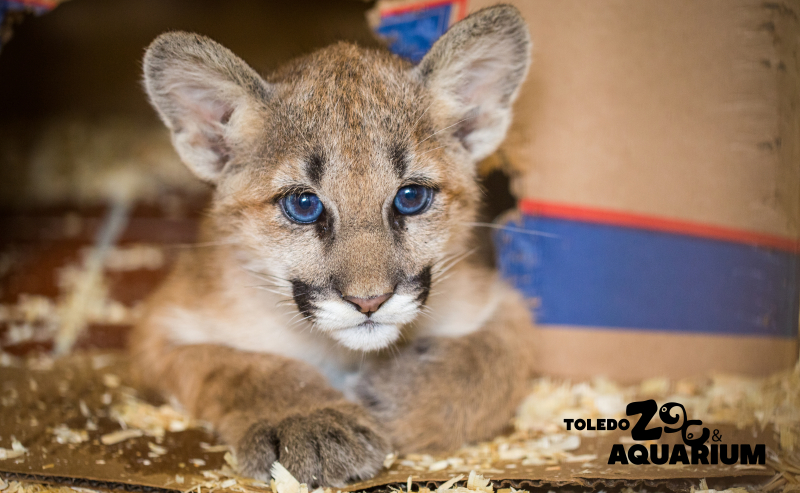 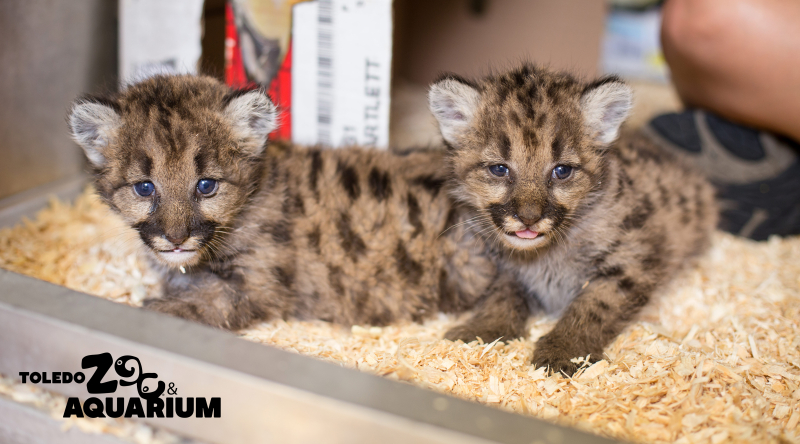 Although the cubs are not yet on-exhibit, the public can view the younger cubs during veterinarian supervised bottle feedings at 11:30 a.m. and 2:30 p.m. each day, near the indoor viewing of elephants in Tembo Trail. 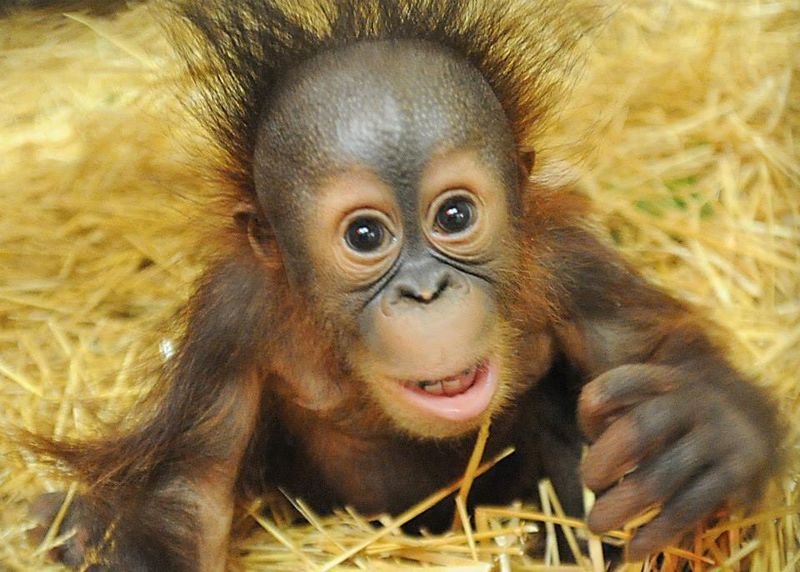 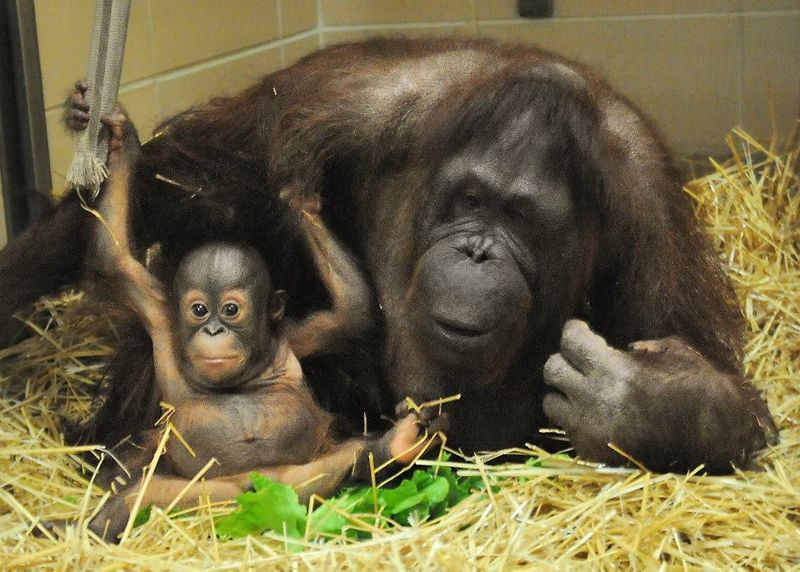 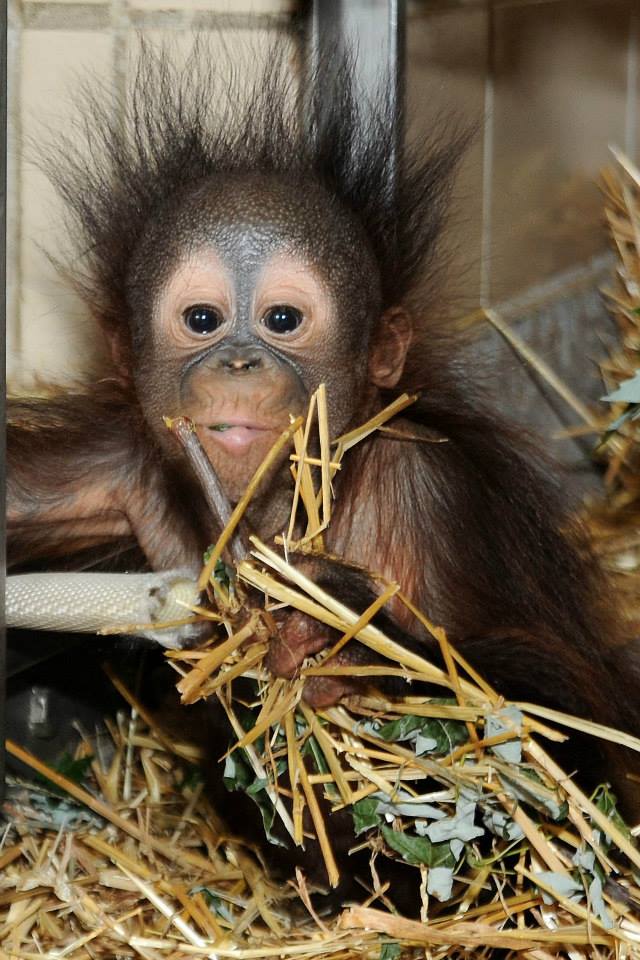 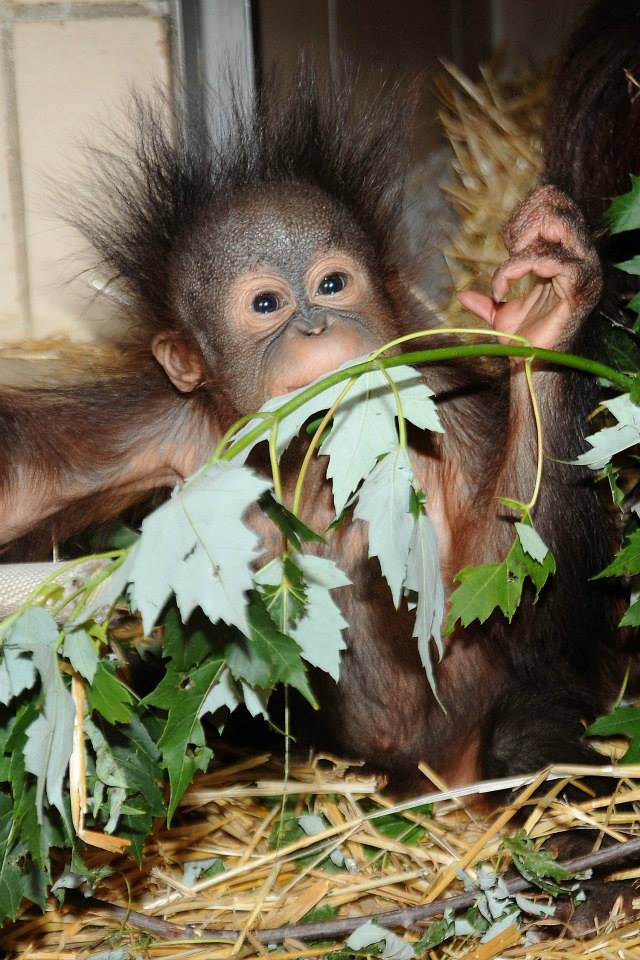 
Kecil (pronounced Ka-cheel, which is Indonesian for “little”), was born at the Toledo Zoo to an experienced mother, but she did not care for him.  The AZA’s Orangutan Species Survival Plan (SSP) and Hand Rearing/Surrogacy Advisory Group leapt into action and found a surrogate mother for Kecil at the Milwaukee County Zoo.  Unfortunately, Kecil and that female orangutan did not successfully bond, and the team identified Maggie as a potential surrogate.

Throughout the process of finding a suitable surrogate, staff members at all three zoos provided exceptional care for Kecil.  All baby animals have better outcomes when raised by members of their own species.  They typically are better socialized and become better parents themselves – a very important trait for endangered animals like Orangutans, where the genetic material of every animal is important to the survival of the species.

Upon his arrival at Brookfield Zoo, Kecil was given a brief physical examination and then taken to an off-exhibit area at the zoo’s Tropic World exhibit to be introduced to Maggie. Since the two have been together, animal care staff have seen very positive interactions. The two engage each other in play, and the young orangutan often sleeps in the crook of Maggie’s arm. He has shown interest in Maggie’s food, but for now he has been sampling softer foods like bananas, and baby cereal has become a staple. In addition, Kecil comes to the front of their enclosure on his own or with Maggie’s assistance to be bottle-fed, which will continue at least until he is a year old.

“Although it has been only a short time and we have a long road ahead of us, we are extremely optimistic due to Kecil and Maggie’s progress so far. Maggie is an easygoing and gentle Orangutan. The two have been together since Kecil’s arrival, and Maggie has provided care and attention that he needs to receive from an Orangutan.” said Jay Petersen, curator of primates and carnivores for the Chicago Zoological Society, which manages Brookfield Zoo.

Kecil was born on January 11, 2014, at Ohio’s Toledo Zoo. His mother, Yasmin, who has raised her own offspring in the past, showed little interest in caring for him following a difficult delivery. Toledo Zoo’s keepers and veterinary team worked tirelessly to offer the two private off-exhibit quarters, hoping that they would bond. However, after months of dedicated but unsuccessful efforts to encourage Yasmin to care for Kecil, they decided it would be best to place him with a surrogate at another zoo.

On May 19, at four months old, Kecil was taken to Milwaukee County Zoo to be placed with a possible surrogate named MJ. During the month Kecil was at Milwaukee, animal care staff worked around the clock to introduce Kecil to MJ, and the initial results were positive. However, the optimal level of bonding that staff had hoped to see was not achieved, and after various stages of progress, the situation seemed to have reached a plateau.

Once again, discussions took place to determine the next course of action for the infant. Because it is extremely important that Kecil be raised by Orangutans rather than humans, the animal care experts decided to try another potential surrogate, and he was moved to Brookfield Zoo to be introduced to Maggie.

During the transfers to Milwaukee County Zoo and Brookfield Zoo, an animal care staff member from the previous facility accompanied Kecil to help in his transition. “Kecil seems calm and adaptable to the changing situations in his young life. The moves don’t seem to have fazed him at all,” said Petersen. “We are all hoping that Brookfield Zoo will be his last move for a while.”

“The collaboration among the three institutions to ensure Kecil grows up in the best environment possible speaks to the commitment of everyone involved,” said Stuart Strahl, Ph.D., president and CEO of the Chicago Zoological Society.

It will be many months before Kecil and Maggie will be on exhibit for guests to see. Animal care staff want to give the two time to develop their relationship. In addition, Kecil needs to become much more agile and mobile before being introduced to the exhibit.

Orangutans once lived over much of Southeast Asia, but their range and population have been dramatically reduced. Their natural habitat—the rain-forest islands of Sumatra and Borneo—continues to be decimated. Huge tracts of the rain forests are logged and converted to palm oil plantations. There are approximately 40,000 Bornean Orangutans left in the wild, and the population has declined by 50 percent since 1990.

See more photos of Kecil and Maggie below. 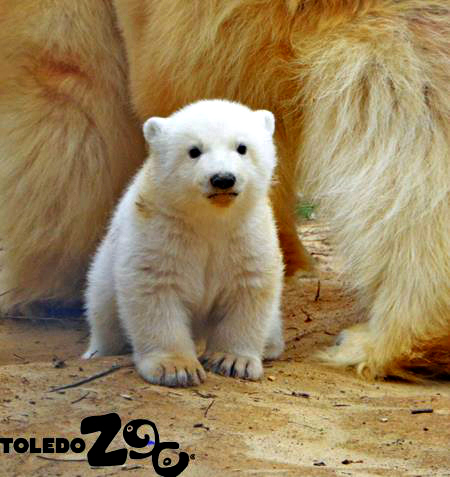 Twin Polar Bear cubs were born at the Toledo Zoo on November 21, but they’ve been behind the scenes with their mother Crystal until last week, when they stepped outdoors for a sneak peek. The cubs, who have not yet been named, are not expected to go into their exhibit until sometime in May.

The zoo staff monitors the twins by remote camera to reduce the stress on Crystal, age 13, and allow her to devote her energies to caring for her babies.  The twins’ father is Marty, the zoo’s resident male Polar Bear. 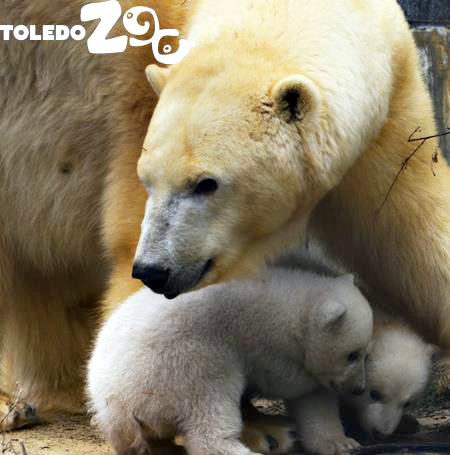 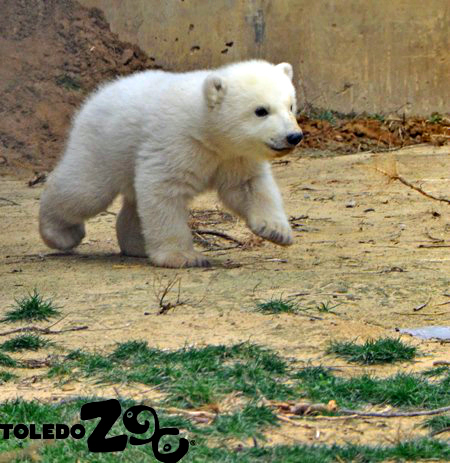 
“This is the fourth litter of Polar Bears the Zoo has had since 2006,” Dr. Randi Meyerson, curator of mammals, said. “I credit our success to high-quality animal care, the staff’s relationship with the animals, the bears’ good temperaments and an outstanding facility. When the Arctic Encounter® opened in 2000, it was a state-of-the-art facility, and it still is.”

The Zoo’s cubs have an important future as ambassadors for a species, protected under the Endangered Species Act, which faces grave threats in their native habitat. “Human activities have a direct effect on Polar Bears,” Dr. Meyerson said, “and their plight should encourage all of us to decrease our carbon footprint.”

Polar Bears in United States zoos are managed by the Species Survival Plan (SSP), established by the Association of Zoos and Aquariums (AZA). Through this cooperative breeding and conservation program, zoos nationwide work together to maintain healthy, genetically diverse populations.

Jeff Sailer, the Zoo’s executive director, said, “As the number of Polar Bears in the wild decreases, it’s more important than ever that cubs in zoo settings serve as ambassadors for their counterparts in the wild. We hope these cubs inspire our visitors to join us in caring for Polar Bears and their environment.”

After 12-Year Effort by Zoos, Kihansi Spray Toads Returned to the Wild 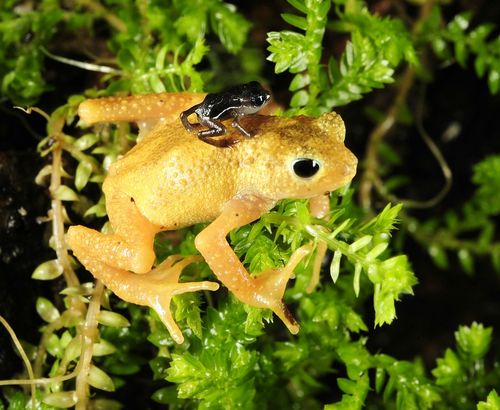 The Wildlife Conservation Society’s Bronx Zoo, the Toledo Zoo, Tanzanian government, World Bank and other partners reintroduced 2,000 Kihansi spray toads into the Kihansi Gorge in Tanzania in October. This is the first example of an amphibian species that had been declared extinct in the wild being reintroduced into its native habitat.

The repatriation effort marks a major milestone for a species declared extinct in the wild in 2009. It is the result of a 12-year partnership to breed the toads in captivity while its habitat was restored. 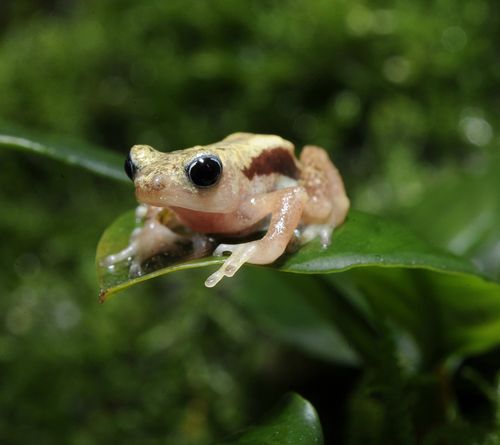 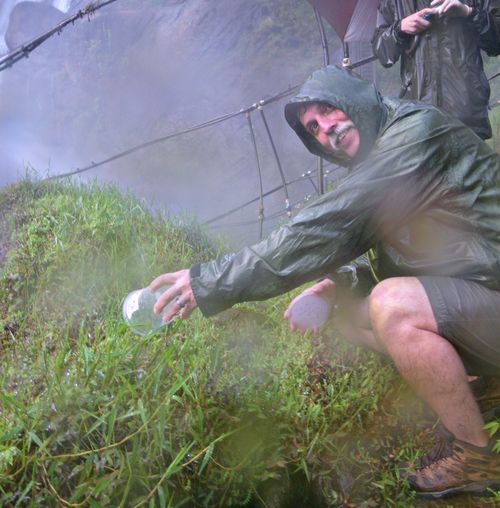 “The WCS Bronx Zoo has been working with our partners for more than a decade to save the Kihansi spray toad with the ultimate goal of  reintroducing it back into the wild,” said Jim Breheny, Executive Vice President and General Director of WCS Zoos & Aquarium and Director of the Bronx Zoo. “The curators in the Bronx Zoo and in the Toledo Zoo – whose expertise allowed them to develop a successful husbandry and propagation program for these unique little toads – have helped to ensure the reintroduction of an important living component back into the Tanzanian ecosystem.” 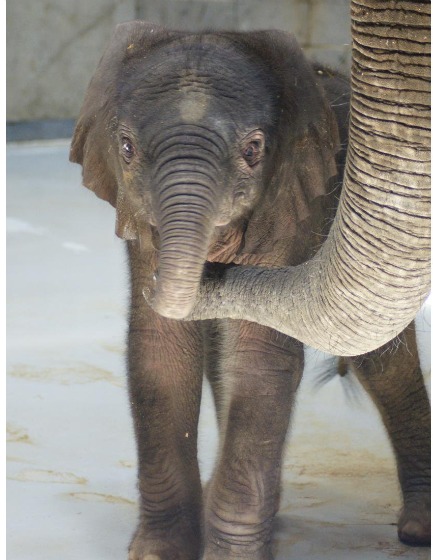 The Toledo Zoo is proud to announce that after a 22 month gestation, on Friday, June 2, Renee, one of their two female African elephants, gave birth to a male calf. The unnamed calf was born without assistance and appears to be healthy, weighing in at approximately 200 – 225 lbs. He stood within minutes of his birth and Renee is showing excellent maternal behavior. This is 32-year-old Renee's second baby. The first, Louie, celebrated his 8th birthday not long ago.

Renee was artificially inseminated. The successful birth of Renee’s calf is vital to the zoo elephant population for several reasons.  The population of females is aging rapidly with a large percentage exceeding the prime breeding age for the species.  Captive breeding efforts are also hampered by a lack of breeding-age bulls and bulls that are of age but show no inclination toward breeding. However, through vigorous breeding efforts, it is hoped that the African elephant zoo population will have a strong future. 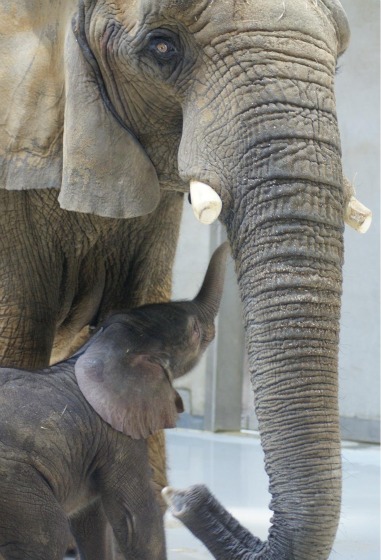 Have a look at this beyond-cute video of the baby testing out his legs:

Meet Siku, the only Polar Bear cub in an American zoo. "Siku" means “ice” in the Inupiat language, and it was chosen for him by a fourth grader from the North Slope Borough of Alaska. The Toledo Zoo, in conjunction with the World Wildlife Fund, Polar Bears International and the North Slope Borough Department of Wildlife Management, sponsored a naming contest for children in that area in which they suggested names for the cub. The Zoo’s large mammal keepers chose Siku, and it’s a fitting name for an animal whose wild counterparts depend on ice shelves for hunting. 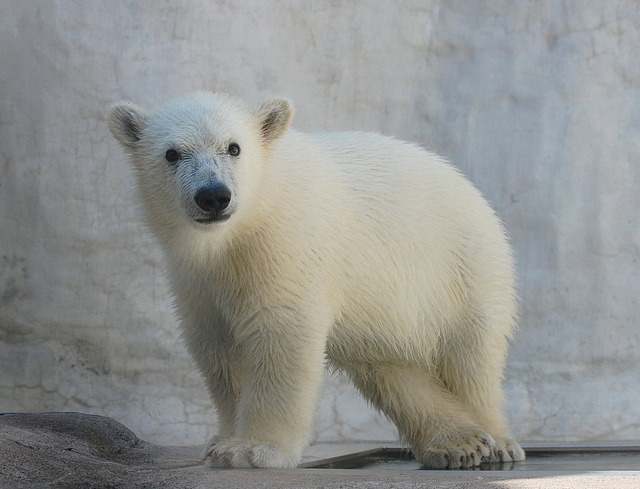 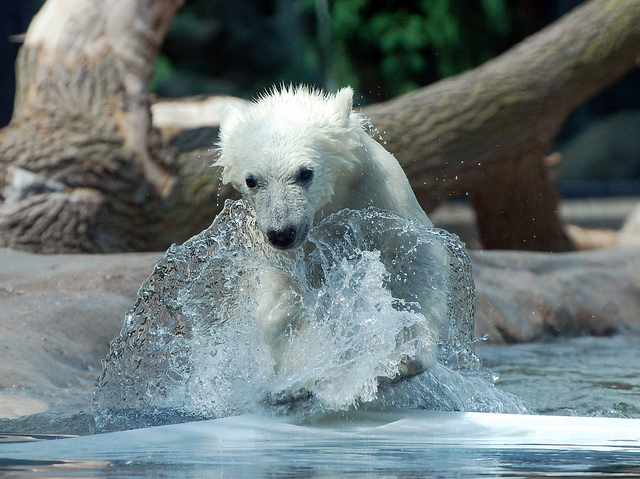 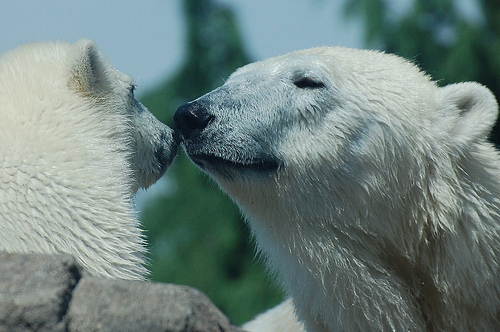 Anita and Ivan, resident white-necked cranes at the Toledo Zoo, just gave birth to a healthy little chick. Fiercely protective of their young, the large birds can be a bit daunting to zookeepers. 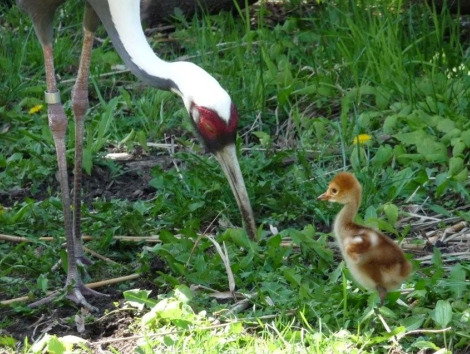 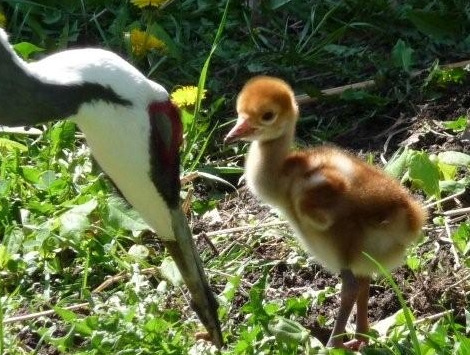 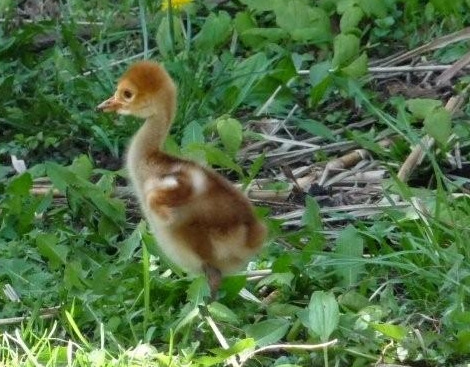