On April 30th, Nordens Ark in Sweden welcomed a pint sized baby, a male Southern Pudu. It is the sixth fawn born at the zoo since it began housing and breeding the species eight years ago in an effort to help conserve this tiny South American deer species. The little boy has been spending his days in an enclosure with his parents for visitors to see. You can get a glimpse of the little guy in the video below!

Pudu, native to South America, are known for being the smallest species of deer measuring under a foot and a half tall and around 25 pounds. They are separated into two subspecies, the Northern Pudu and the Southern Pudu. The southern variety can be found on the slopes of the Southern Andes at elevations up to 6,600 feet.  They live in temperate rain forests, using their small size to help them take cover in undergrowth to avoid predators. They live on a herbivorous diet that includes a wide range of different types of plant matter.

Both subspecies of Pudu are classified as "vulnerable" by the International Union for Conservation of Nature (IUCN) due to overhunting and habitat loss. Zoos around the world are helping to conserve this species through captive breeding programs and re-introduction efforts. 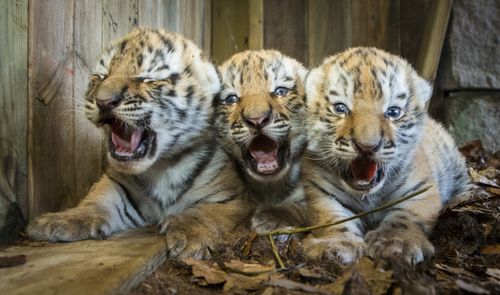 Born on April 12, three Amur Tiger cubs at Sweden’s Nordens Ark are thriving. The cubs recently sat for a quick photo shoot.  In the video, two of the cubs were tuckered out, but the third cub had other ideas! 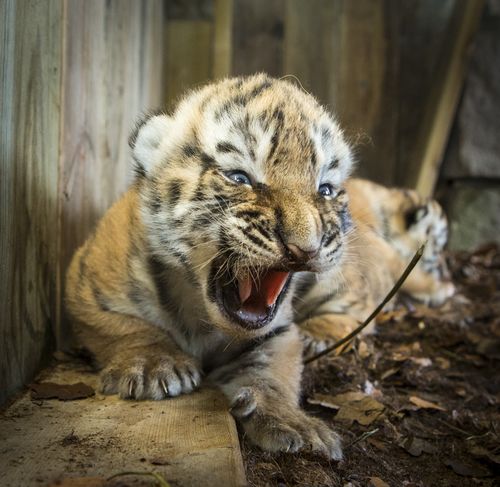 The two-and-a-half-week-old cubs were born to mother Sparta and remain with her in the birthing den for now.  Honan continues to provide excellent maternal care for her offspring.  The family will move onto public display sometime this summer.  You can see the cubs’ first baby pictures here.

Amur Tigers are also known as Siberian Tigers.  They are native to the far northeastern regions of Russia and are the largest of the six living Tiger subspecies.  With only 400 individuals remaining in the wild, zoo-born animals like these three cubs are increasingly important to the survival of the species. 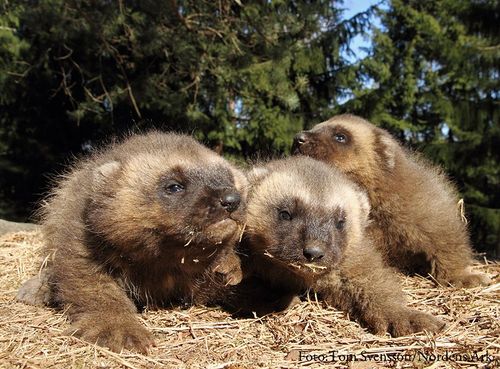 Staff at Nordens Ark in Sweden finally got a glimpse of their newest residents, three Wolverine pups. The pups, born on February 21st, recently emerged from their mother's den; where they spent the first six weeks of their lives completely dependent on their mother.

Wolverines have a fairly small captive population of around one hundred individuals internationally. Since Wolverines are considered to be difficult to breed in captivity, and are associated with high infant mortality, this is a very important birth for the captive population. This is the second litter for the mother. She proved to be an excellent mother to her first litter of pups, so keepers are optimistic about the outlook for her newest batch. 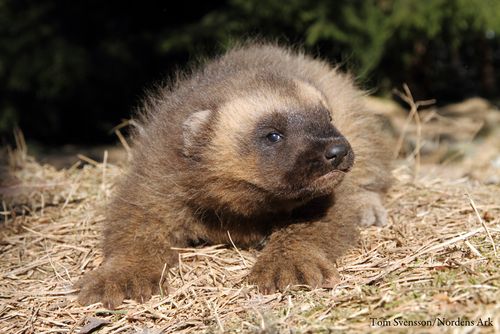 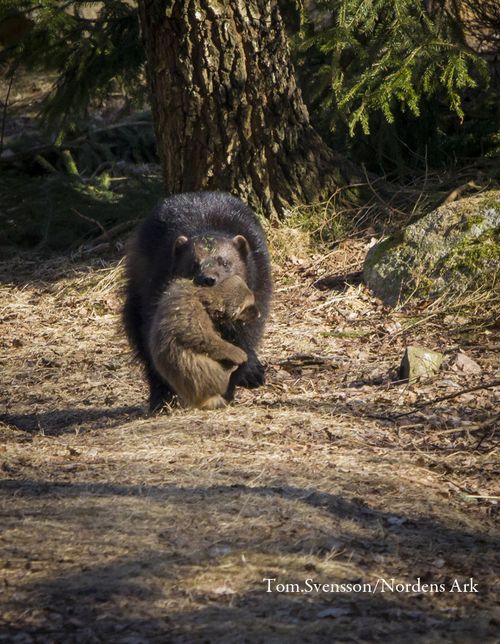 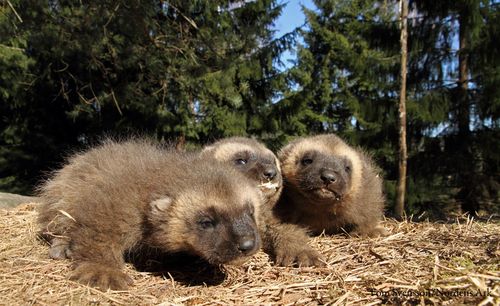 Wolverines are medium sized predators. They are classified in the same family as Weasels, and are the largest species in this grouping. They are ferocious predators that are known to take down prey several times their own size. Native across the Northern Hemisphere in North America, Europe and Asia, Wolverines have adapted to a wide range of habitats. They are currently listed as species of "least concern" by the IUCN due to relatively large population numbers. Despite this, in February of 2013, the US Fish and Wildlife Service proposed give the species protection under the Endangered Species Act due to habitat loss as a result of global climate change. 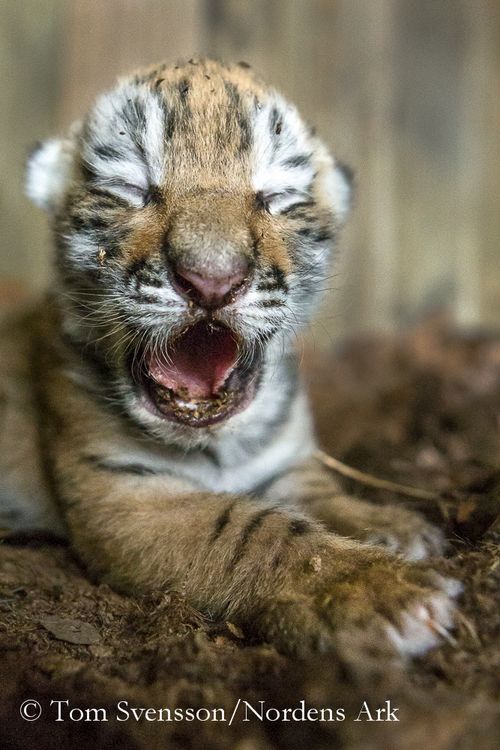 A litter of Amur Tiger cubs was born on April 12 at Sweden's Nordens Ark. The three cubs, two males and a female, were born to mother who is important to the European breeding program for this critically endangered species. For the next few weeks, the cubs will remain with Honan in the den. According to zoo keepers, Honan is a great mother and is very gentle with her cubs. The family will make a public debut early this summer. 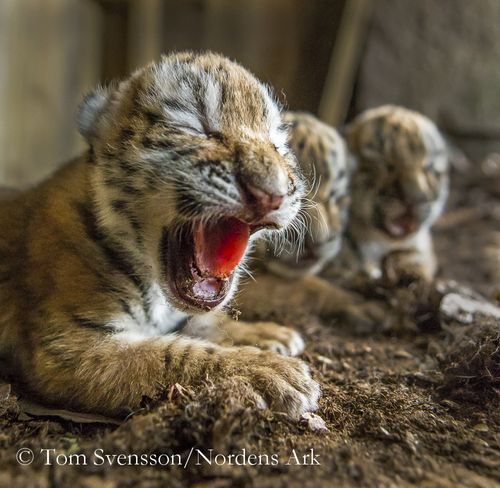 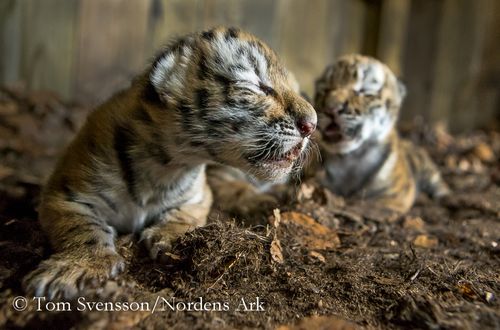 Amur Tigers, also known as Siberian Tigers, are the largest of the six living Tiger subspecies, with males attaining a head and body length of well over six feet (200 cm) and a weight of more than 400 pounds (180 kg).  They inhabit remote mountain areas of the Russian Far East.  With fewer than 400 individuals and a breeding population of about 250 adults, Amur Tigers are classified as endangered, due primarily to poaching.  A number of international agreements to ban trade and enhance surveillance may be helping to stabilize the population, though low genetic diversity within the wild population may threaten the future of this species. 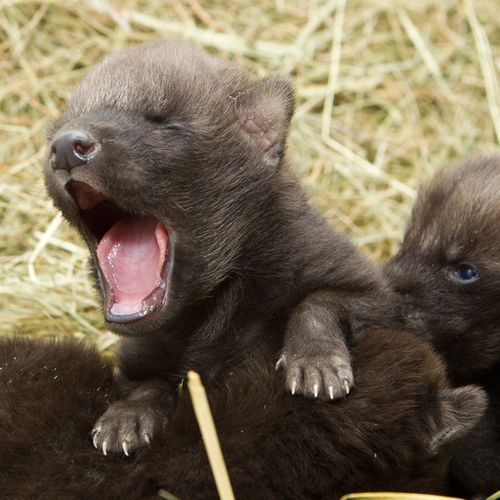 Maned Wolves at Sweden's Nordens Ark Zoo had two pups in late January; one male and two females. The zoo's breeding pair is a key pair in the Maned Wolf breeding program worldwide, making this birth especially important for conservation. Maned Wolf pups are born all black, and gradually change color as they grow older. By around six months of age, they'll be nearly completely reddish brown. The pups will remain close to their mother in their den for now, but by spring visitors should have a chance to see them in person. 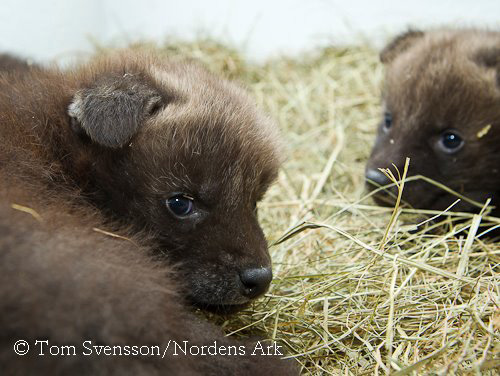 Maned Wolves come from South America and are currently listed as vulnerable to extinction on the IUCN Red List.