Polar Bear Cub Emerges From Den and Explores Everything 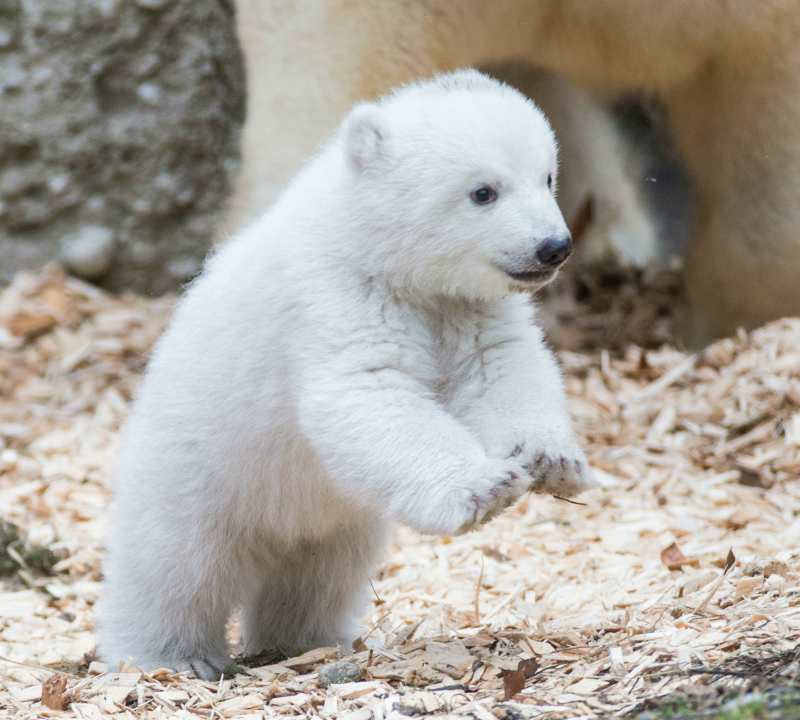 After 14 weeks snuggling with her mother in the birthing den, a big day arrived for a female Polar Bear cub at Munich Zoo Hellabrunn:  The baby and mom Giovanna emerged from the den for the first time to explore their tundra habitat.

Everything is new and exciting for the cub, who, still somewhat unsteady on her feet, ventured out cautiously onto the grounds of the tundra enclosure. There was so much new to discover: every ray of sun, every blade of grass, and every stone had to be closely examined. Determined to explore everything, the little polar bear followed Giovanna's every step in this unknown world. 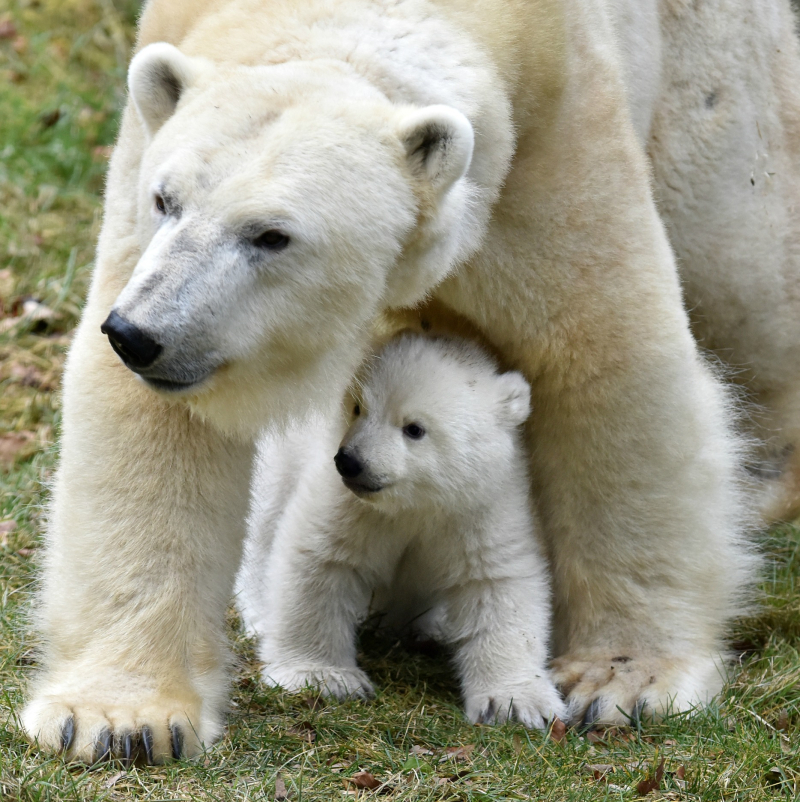 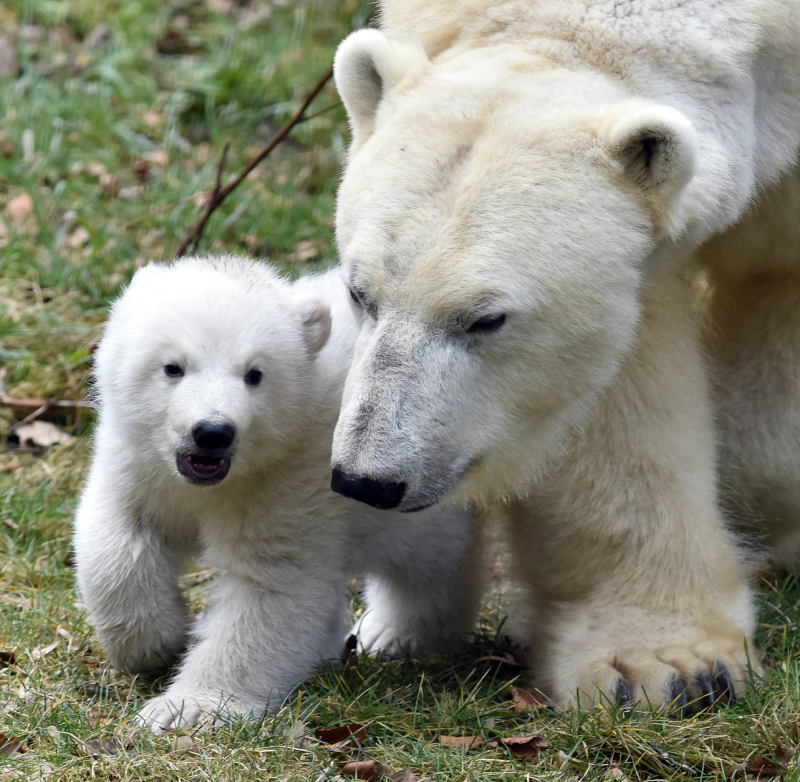 After spending the last few months in the mothering den, Giovanna has used up almost all her fat reserves and as a result lost much weight, which is normal for Polar Bear mothers. Giovanna is gradually returning to her normal diet, and her cub is trying bits of solid food. The cub still drinks her mother’s milk, which will continue for two more years.

Zoo director Rasem Baban said, "In the last three months, Giovanna has shown herself to be an experienced and patient mother. It is a great joy to watch her show her cub the world outside the mothering den. The little one will discover more and more every day and become increasingly bolder."

The little cub, who is not yet named, is an ambassador for her species, which is under threat from shrinking sea ice.  As ice in the Arctic diminishes, Polar Bears’ ability to hunt seals from the ice is impaired. Polar Bears are listed as Vulnerable by the International Union for Conservation of Nature. 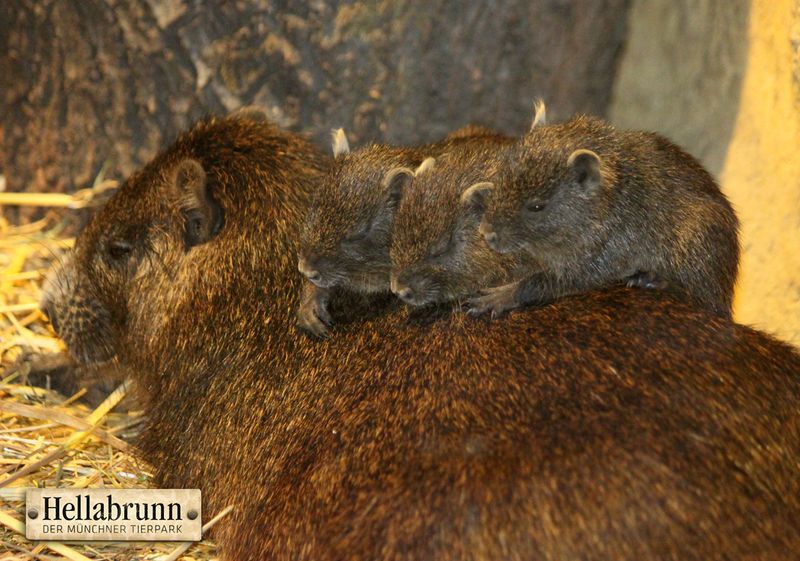 Riding on the back of their mother, three Cuban Hutia babies born November 7 are charming visitors at Munich Zoo Hellabrunn.

When they’re not hitching a ride, the mouse-sized babies snuggle up with mom and peek at the Agoutis and Parrots that share their enclosure.  The babies have been named Nikita, Nicki and Nicol. 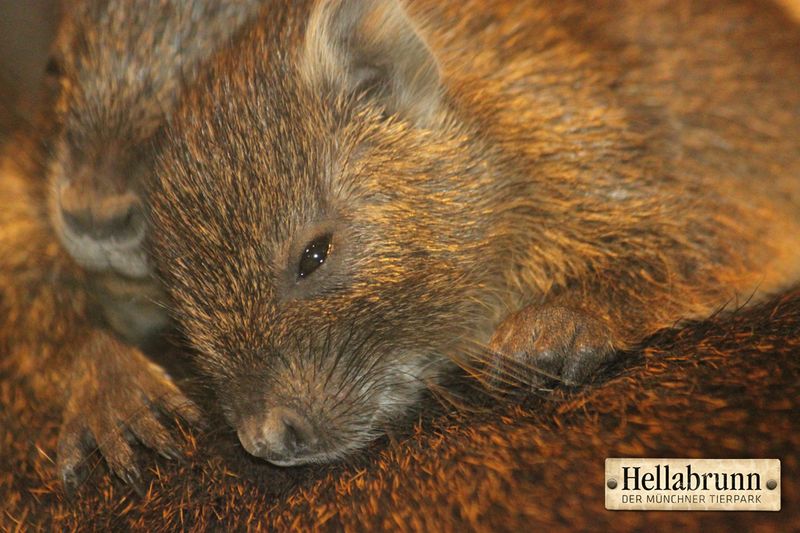 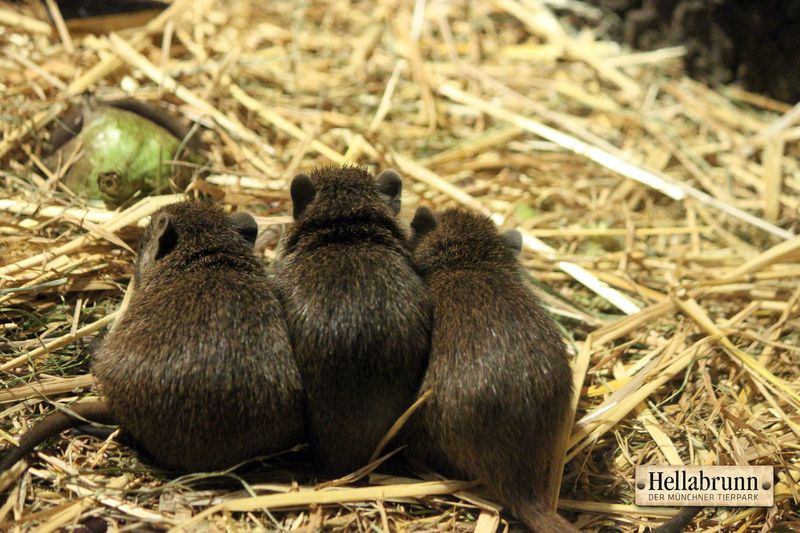 The triplets are the first of their species to be born at the zoo in 12 years.  Five-year-old Fidel, the father, was introduced to female Morena last year.

Morena and Fidel will look after Nikita, Nicki and Nicol for about six months and teach them how to climb and groom each other.

As their name implies, Cuban Hutia are found on the island of Cuba.  They are small herbivorous rodents, similar to Cavies.  Hutia are active during the day and are very social animals; thanks to their strong claws they are excellent climbers and diggers. About 20 species of Hutia once lived on various Caribbean islands; seven species are extinct, with the remaining species listed as Threatened by the International Union for Conservation of Nature. 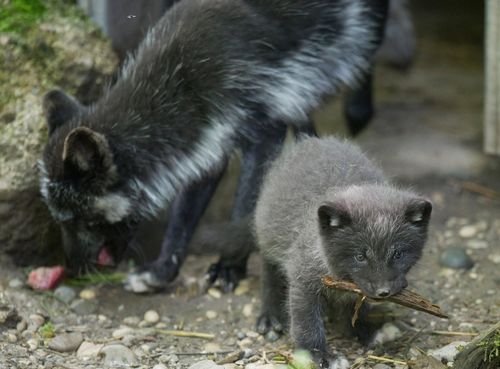 Ronja, a two-year-old Arctic Fox at Munich's Hellabrunn zoo, gave birth to cubs on April 26 in the privacy of her den, but only now – roughly seven weeks later - are keepers and zoo visitors getting their first glimpse of the babies! Initially five cubs had been counted… but then, keepers spotted a sixth! The individual cubs can be identified by the color of their fur - one has white paws, another a white bib, and one is completely grey. It's still too early yet to know what sex each is. These are the first Arctic Fox cubs to be born in the entire 102 year history of the zoo.

The cubs spend most of their time cuddling up to their mother in their den. Although the little ones still sleep a lot, they are getting more active all the time. About five times a day Mom and Dad (named Yaqui, also two years old), show them the world beyond the den for about 15 minutes at a time. And where they once only nursed, at this age they are almost weaned, as their pointed teeth have grown in and they have begun to eat meat. 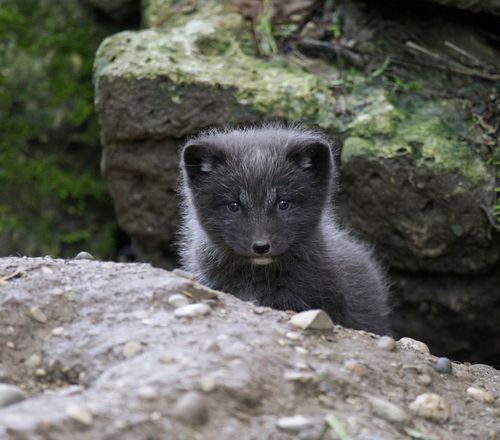 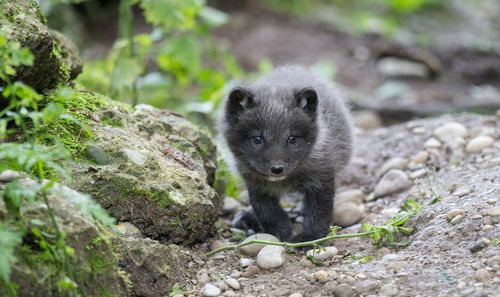 Read more about these cubs after the fold: 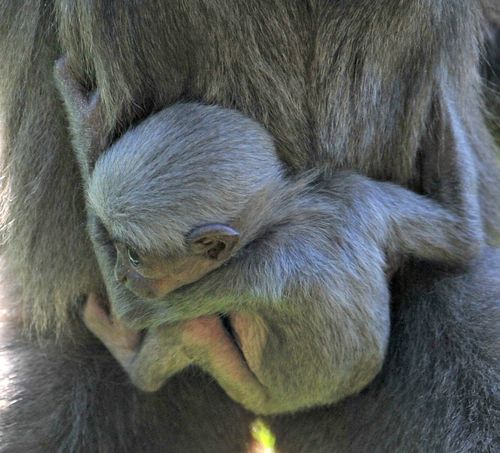 Clinging to its mother as she swings from branch to branch at Munich’s Hellabrunn Zoo, a tiny Javan Gibbon represents hope for this critically endangered primate.

Born August 19, the infant is one of only handful of Javan Gibbons born worldwide each year in zoos, making it an important part of the international captive breeding and conservation effort for this species. 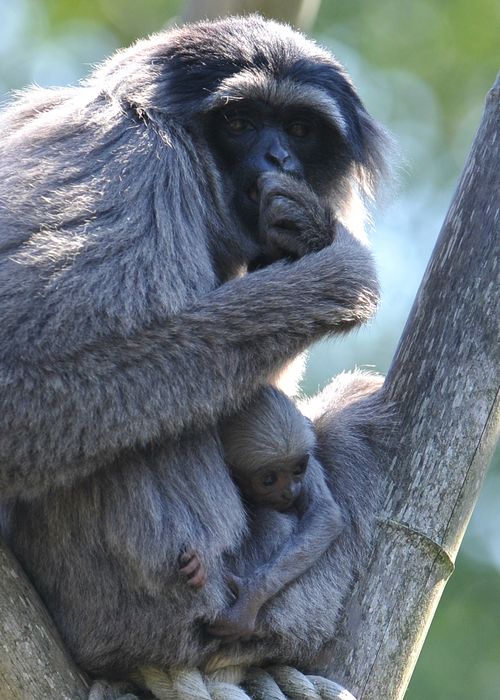 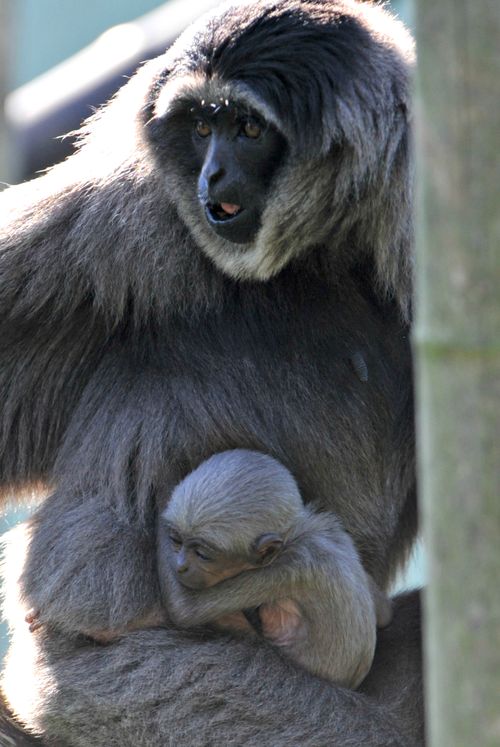 The baby, whose gender is not yet known, is the fourth baby born to female Pangrango and is a constant source of entertainment for older brother Flip, age 7, and sisters Isabell, 4, and Kim, 2.

“Munich’s Javan Gibbons are really very special; this endangered species of primate is only found in one German zoo, here at Hellabrunn. The birth of a fourth baby increases the family to six members. We play an important role in breeding and we are making a significant contribution to the conservation of Javan Gibbons. We are very proud of this,” said zoo director, Dr. Andreas Knieriem.

Javan Gibbons are found only on the Indonesian island of Java and are one of the world’s most endangered primates.  They share the island, which is about the size of North Carolina, with 135 million people and are confined to a few small forest reserves.  Javan Gibbons are also known as Silvery Gibbons. Like all gibbon species, they use their long arms to brachiate among tree branches.  Family groups sing loudly to advertise their territory to other gibbons. 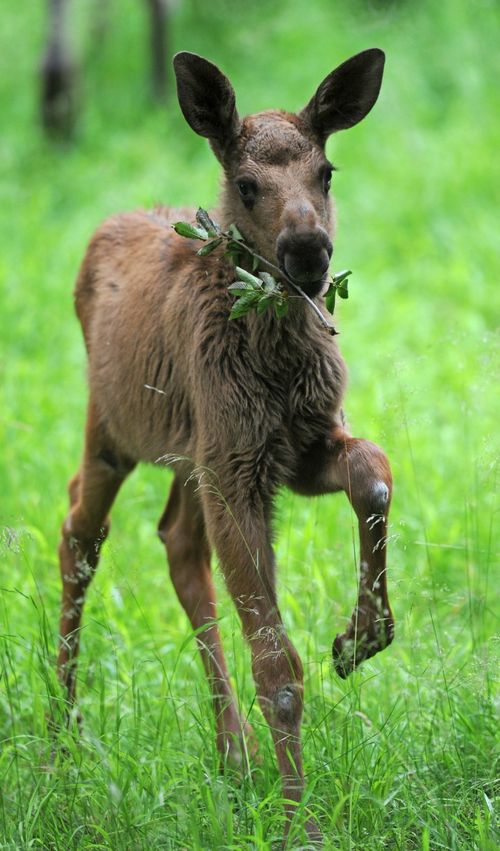 Guess what's new at Tierpark Hellabrunn? They have overly-long legs, uncertain movements, ears that seem way too big and fuzzy muzzles. If you guessed Moose you guessed right! Known in Europe as Eurasian Elk, the majesty of the animals they’ll grow into, especially the bulls with their impressive antlers, is hard to see right now. However these three little Moose calves, born at the end of May at Munich Zoo, are real attention grabbers.

After a pregnancy lasting approximately seven and a half months, Anita, a three-year-old cow, gave birth to a healthy girl called Madita on May 21. Two days later, on May 23, another cow, Merle, also age three, gave birth to twin calves in an unproblematic nighttime delivery. The male has been named Merlin and the female, Meli. The proud father of the trio is Josef, a three-year-old bull born in Bavaria.

Moose are native to North America, Europe and Asia. Their habitat is mountain meadows and forests. Moose are herbivores and live on a diet of grass, plants, bushes and saplings. Hellabrunn’s herd now comprises seven animals: Josef, Merle, Anita, Frieda (aged 2) and these three new calves. 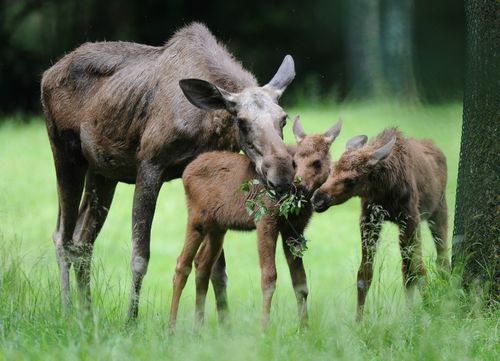 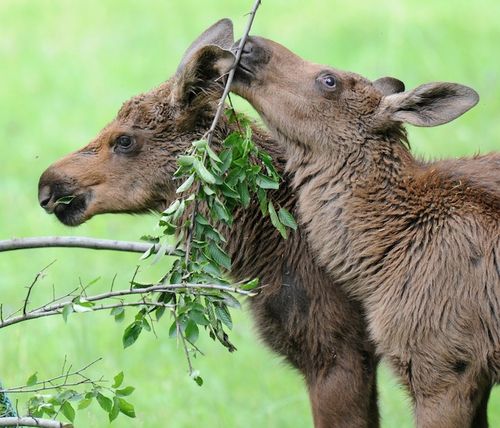 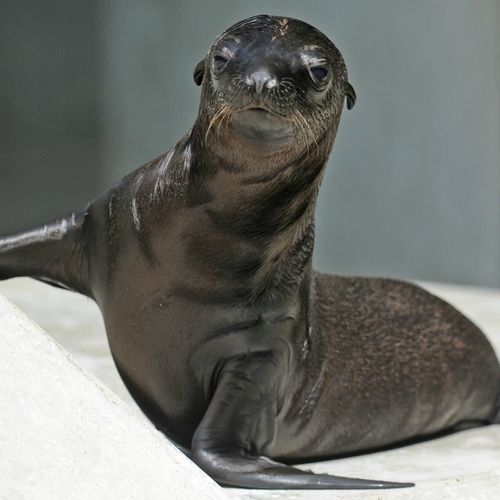 When four California Sea Lion pups were born in a single month at the Munich Zoo, park officials were ecstatic.  The pups were each born to different mothers and include three females, named Mona, Melly, and Momo, and one male, named Max.

What’s even more amazing is that all four pups were sired by Barney, the Munich Zoo’s prolific adult male Sea Lion, who has already sired a record 28 offspring.  Barney got a head start on fatherhood because he became sexually mature at age three – two or three years earlier than the average male Sea Lion.

The Sea Lion pups are already perfecting their swimming techniques in the zoo’s Polar World exhibit.  Thanks to the rich milk produced by their mothers, the pups will grow dramatically in the first year of life.  By the time they are fully grown, the females will weigh over 200 pounds and the males will tip the scales at up to 800 pounds. 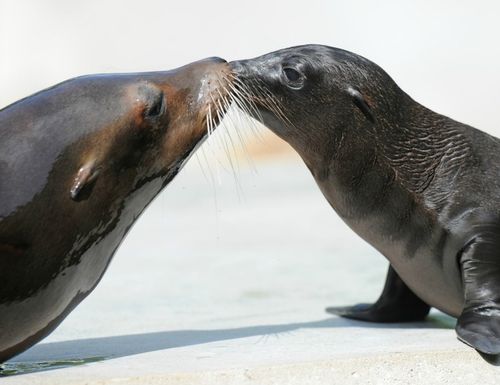 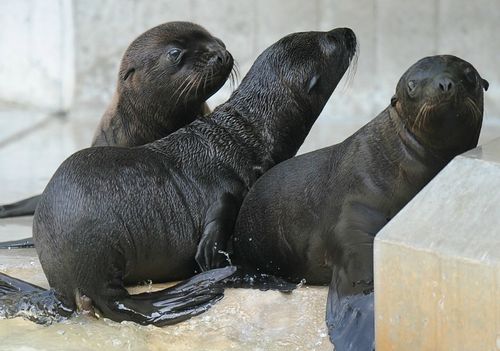 After a gestation period of 670 days, Munich's Tierpark Hellabrunn’s  9-year-old Indian elephant Temi gave birth to her first calf in the evening on Friday, May 6. The newest addition to the herd is a boy – called a bull – and he came into the world weighing 257 lbs (117 kilos)!

“We are overjoyed that Munich has a healthy baby elephant once more,” said Mayoress and Chairwoman of the Board of Directors, Christine Strobl. Zoo Director, Dr Andreas Knierim added: “Although it’s her first baby, Temi is taking excellent care of her newborn son. It is beautiful to watch both of them.” 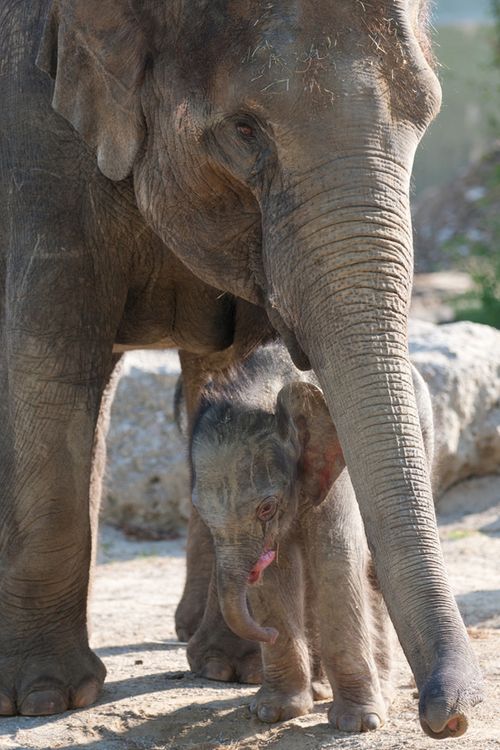 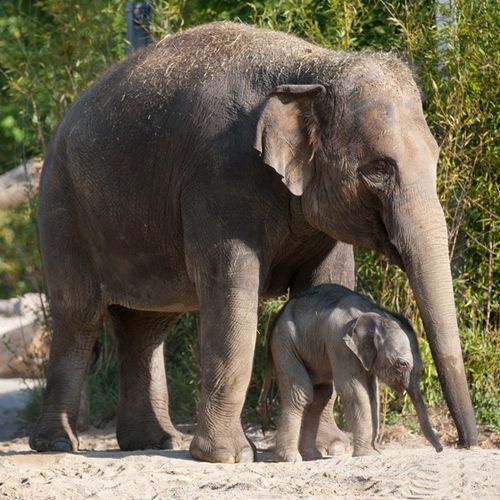 Elephants are the largest terrestrial animals There are two species – African and Asian Elephants (Indian elephants like Tami are a subspecies of Asian elephants). Today, both are endangered. Twenty-five years ago there was approximately 1.3 million elephants in African alone, but now the estimate has sunk to close to 500,000. Even less are to be found in Asia.

On Monday, The Hellabrunn Zoo in Munich, Germany welcomed Jamuna Toni, a newborn elephant. The baby was born with a weight of 112 kilograms. That's over 246 pounds! The press got a good glimpse of her yesterday and she's clearly a playful "little" thing. 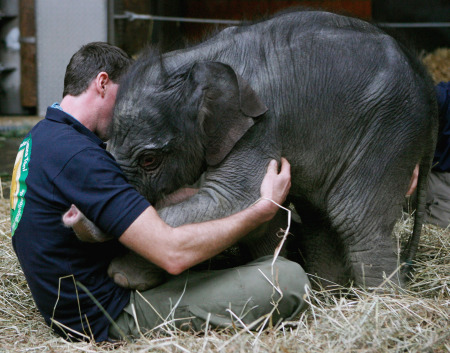 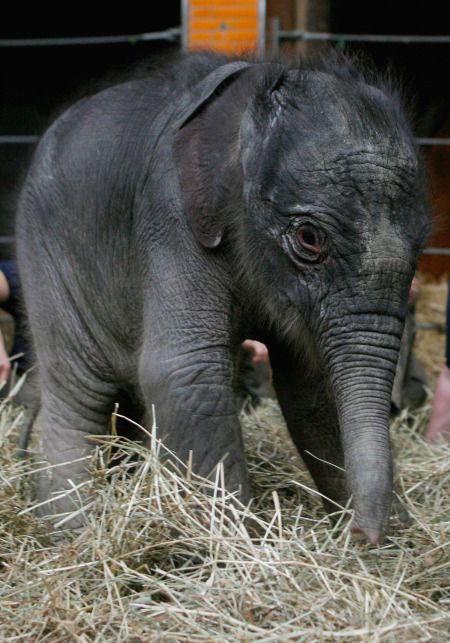 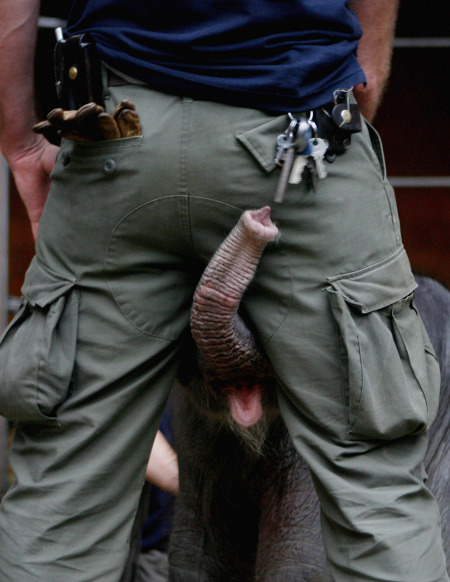 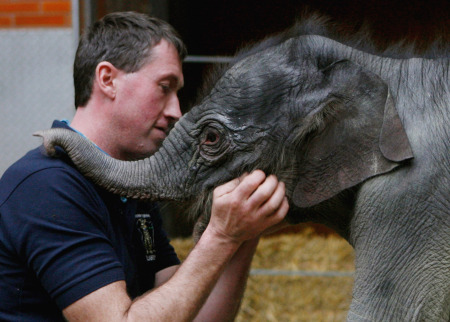