Baby alert! Los Angeles Zoo’s mandrill Juliette recently gave birth! The female infant is nursing well and bonding with her mother. “Every time I get to sit with Juliette and her new infant, I feel honored. Being able to watch the relationship between them develop is so special,” says Animal Keeper L’Oréal Dunn. “This is Juliette’s fourth offspring, and she is a great mom. She does a fantastic job demonstrating maternal care like cuddling, grooming, nursing, and removing the umbilicus off of the infant.” If you look closely, you can still see the umbilical cord in one of the video clips taken soon after birth. 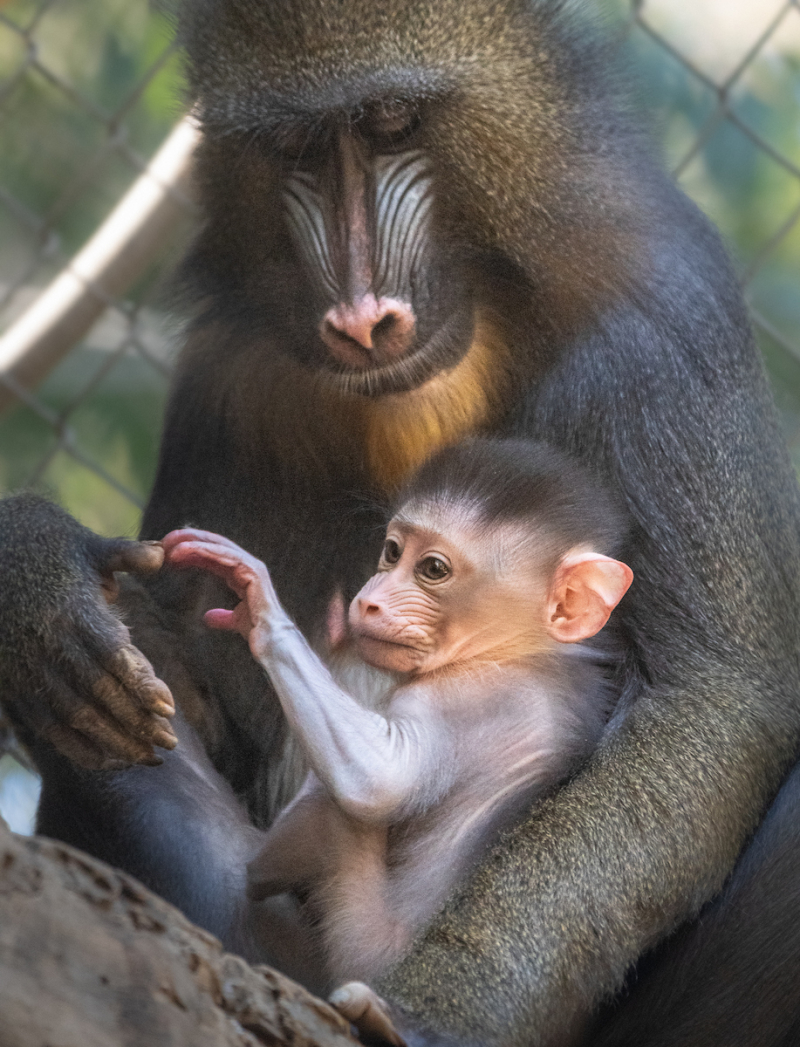 We can’t believe how quickly Denver Zoo's baby mandrill is growing up! Akili is getting more vocal by the day and loves exploring her home in The Zoo's Congo Basin.

Even though Akili is becoming more independent, mom Kumani is still very protective and keeps her within arm's reach at all times (literally!). Akili turned nine months old on February 6, but check out the video below to see her first six months at the Zoo!

Seeing double! Conservationists at Chester Zoo are celebrating the birth of two baby mandrills – the first of their kind to be born at the zoo in more than a decade. Chester Zoo is celebrating the birth of not one but two baby mandrills.

The precious primates entered the world just five weeks apart and are the first of their kind to be born at the zoo in more than a decade.

The first to arrive was born to 10-year-old mum Brio, providing her with her first taste of parenthood, with the second infant arriving to more experienced mum, Obi (17). The new babies are half siblings and share the same dad, Kamau (11).

Mandrills are listed as vulnerable on the International Union for the Conservation of Nature’s (IUCN) Red List of threatened species, with numbers in the wild having declined significantly in recent years. Denver Zoo’s female Mandrill, Kumani, gave birth to a healthy female on May 10.

The baby, who her caretakers have named ‘Kesi’, is the first for seven-year-old Kumani and her mate, 11-year-old Jelani. The zoo’s animal care team says Kumani has already proven to be a great mom, providing Kesi with the care and attention she needs to thrive.

Kesi’s arrival marks the first Mandrill birth at the Zoo since 2003, when Denver Zoo went through a Mandrill baby boom with two females born in two years. Jelani joined the troop in 2013 followed by Kumani, who arrived in 2018 at the recommendation of the Species Survival Plan. At the end of 2018, the zoo’s animal care staff suspected Kumani might be pregnant, which was later confirmed via ultrasound. 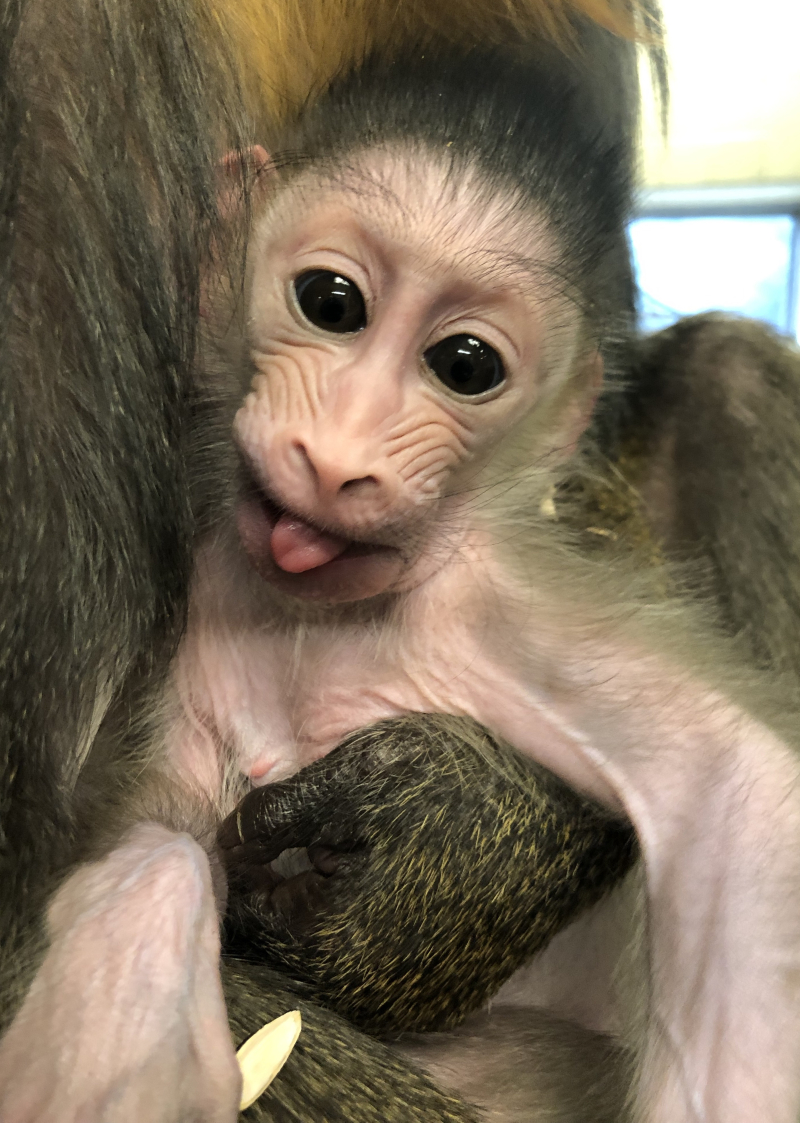 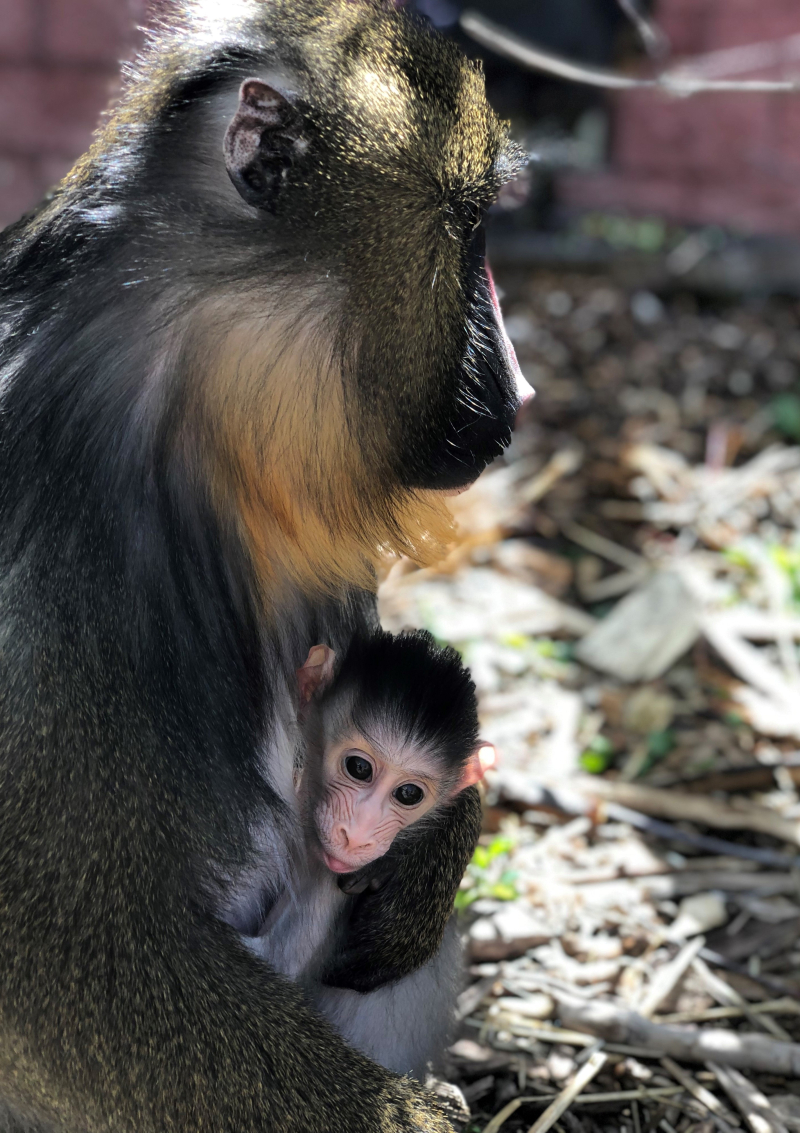 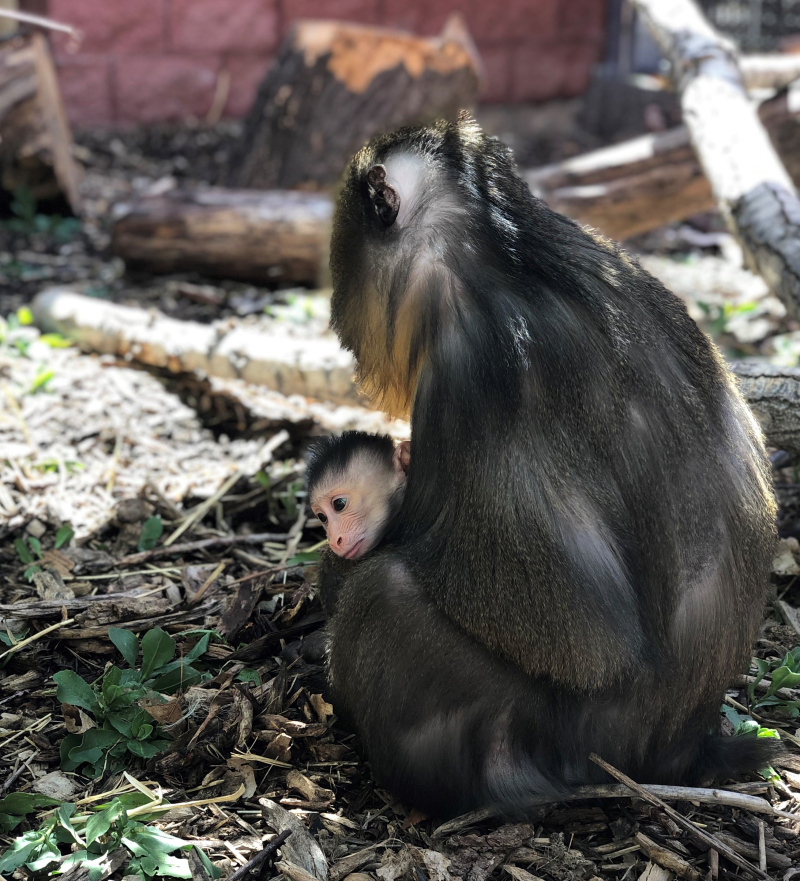 Mandrills, which are listed as “Vulnerable” by the International Union for Conservation of Nature, are found in the rainforests of central West Africa. You can spot mandrills by their bright blue and red face, and long teeth. Males are larger and usually have brighter coloring. They’re a social species and travel in groups known as “troops.”

Guests at Denver Zoo are encouraged to visit Kesi and the whole Mandrill troop in the Congo Basin area in Primate Panorama. Animal care staff says the best time to catch these colorful primates and catch a glimpse of Kesi is first thing in the morning or at lunchtime, when they are foraging for food. Be sure to follow the zoo on Facebook, Twitter and Instagram for regular updates on Kesi! 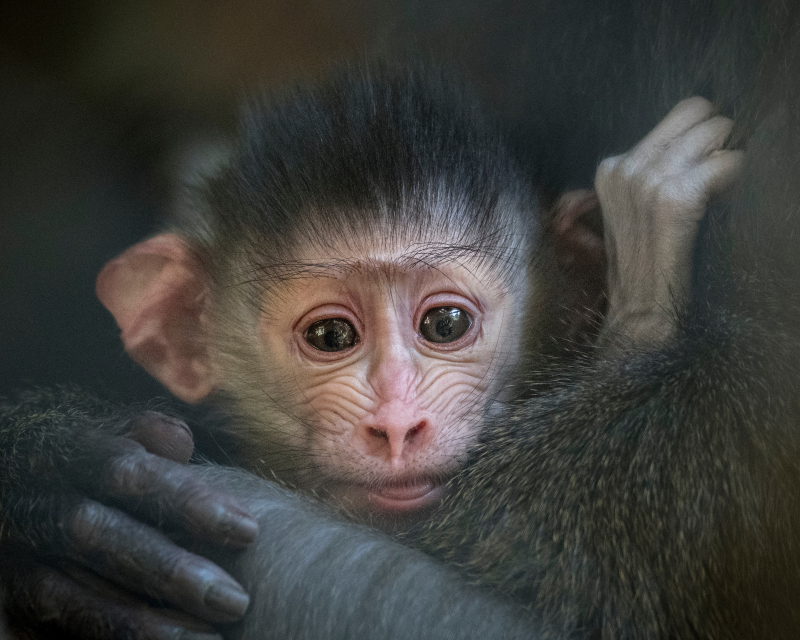 The first-time mothers came to the L.A. Zoo from Parc Zoologique de La Palmyre in France in April 2016 to be paired with the first-time father, six-year-old Jabari, as part of a Species Survival Program (SSP) to strengthen the gene pool of this Vulnerable species.

“This is a very new breeding group of Mandrills that has only been together for about a year, so we’re incredibly happy with how well things are going so far,” said L’Oreal Dunn, animal keeper at the Los Angeles Zoo. “This species comes from a small area in Africa that isn’t accessible to most people, so it’s very special that our guests can now observe babies here for the first time in over 40 years.”

The half-siblings can be seen clinging tightly to their mothers, playing together, and testing their boundaries. They are learning to navigate their new habitat, a rainforest-like environment that supplies the group with plenty of trees, logs, and plant life to explore during the day and aerial lofts and ledges where they sleep at night.

The babies were born without the signature red and blue stripes on their faces that people often associate with the unique looking primate. Only their father, who is the dominant male in the group, has the vibrant coloring on his elongated muzzle.  The red-and-blue-striped skin on a Mandrill’s face is a sign to females that a male is ready to mate. While female Mandrills can have colorful hues on their face as well, the markings tend to be paler in comparison.

Mandrills may look like Baboons, but DNA studies have shown that they are more closely related to Mangabeys. These Monkeys have extremely long canine teeth that can be used for self-defense, though baring them is typically a friendly gesture among Mandrills.

Wild Mandrills live in the remaining rainforests of western Africa in Cameroon, Gabon, and southwestern Congo. Populations are under threat and declining due to habitat loss and fragmentation caused by the spread of agriculture and human settlement, so the species is listed as Vulnerable by the IUCN Red List of Threatened Species. Mandrills are often hunted for food as many Africans consider them to be a delicacy. 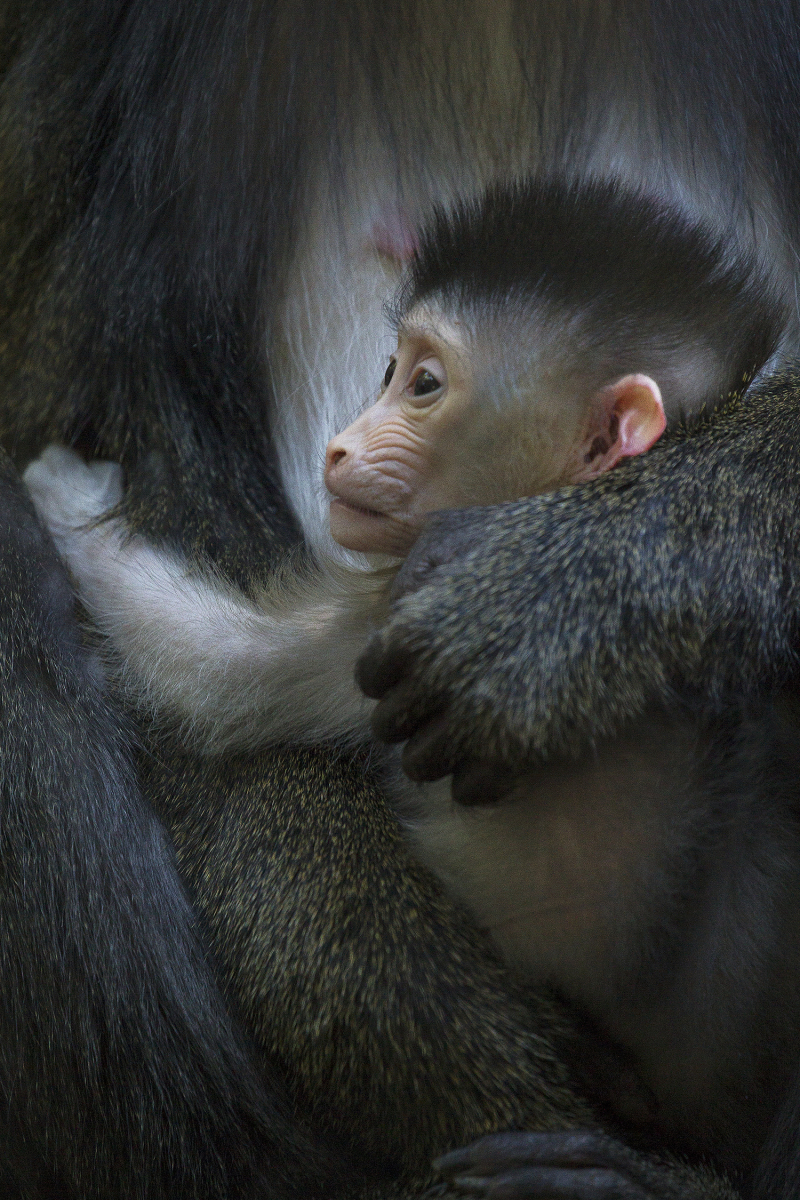 The San Diego Zoo’s Mandrill group welcomed a new addition to their ranks last week. Female, Kesi, gave birth to a baby boy, and he is the first Mandrill born at the Zoo in over 14 years.

Animal care staff had been watching for Kesi to give birth; but the night before, there were still no signs she was in labor. The next day, staff members said they were surprised to see Kesi walk out of her bedroom holding her new baby.

“It’s like every day we would come in, in the morning, and think like there might be a baby – we don’t know,” Jenny Baublit, senior primate keeper at the San Diego Zoo. “To actually see it was pretty incredible. Especially since she came in so quietly, just like a typical morning, but just happen to have a baby with her.”

This is the first baby for Kesi and male Mandrill, Jasper. So far, staff said, they are doing exceptionally well as new parents, and mom is being very attentive to the baby’s nursing needs. 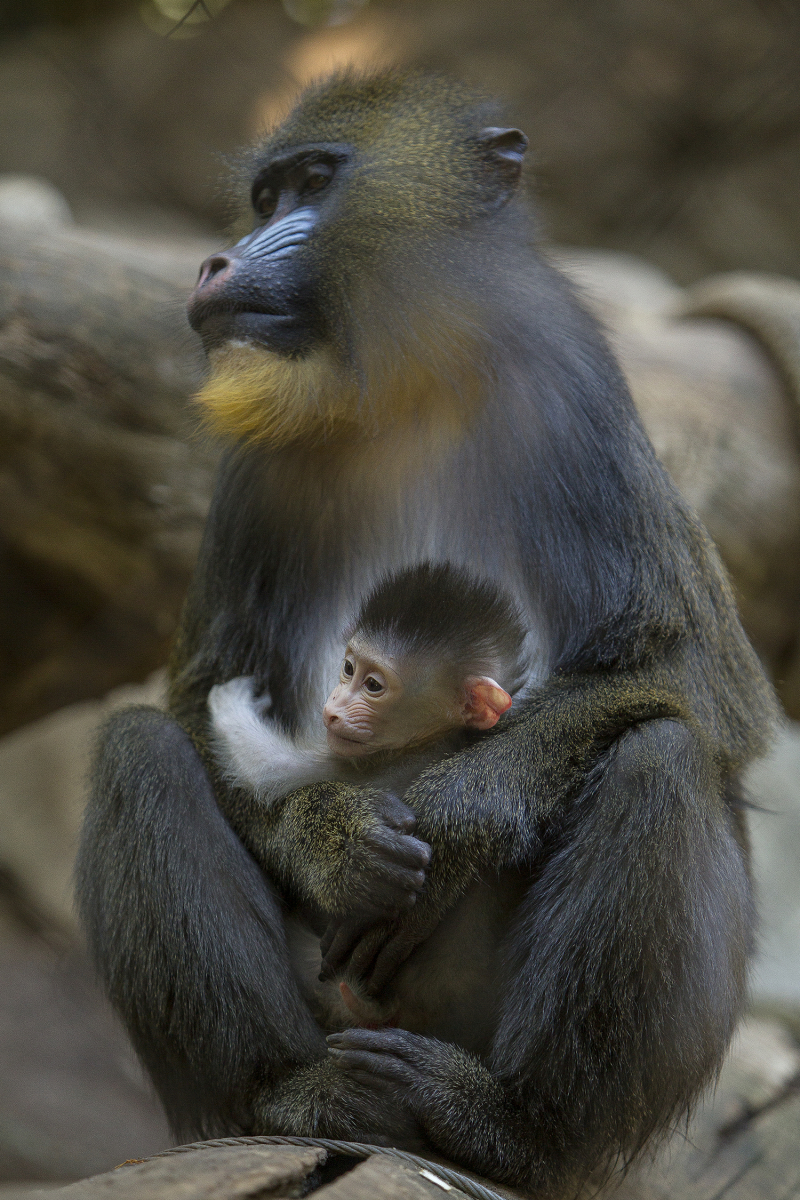 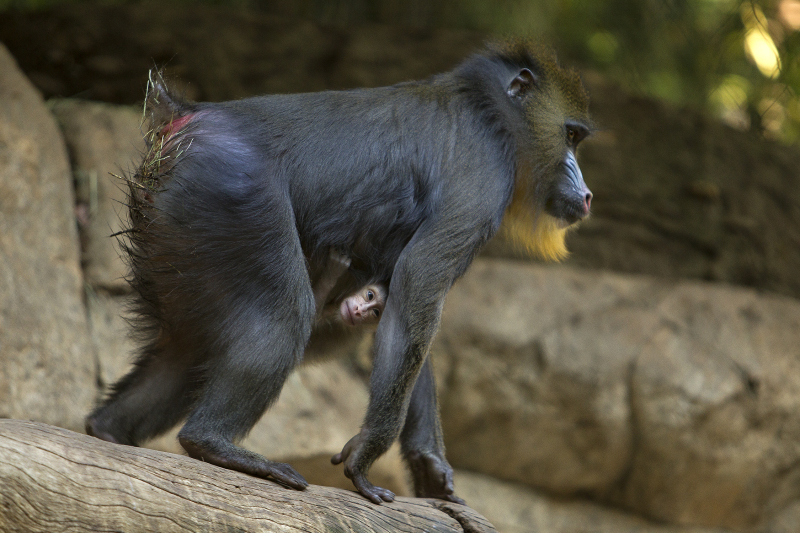 The Mandrill (Mandrillus sphinx) is the largest and most colorful of the Old World monkeys. They are easily recognizable by their furry head crests, manes and golden beards. Their bright coloration, red nose and lips, and thick purple and blue ridges along the sides of the nose are also well known.

Mandrills are native to small social units in the rain forests of equatorial Africa. These small groups often join with others to form larger groups called ‘hordes’ that can number in the hundreds and sometimes have more than 1,000 members.

The species is listed as “Vulnerable” on the International Union for Conservation of Nature (IUCN) Red List of Threatened Species. Their numbers are decreasing due to habitat loss from illegal logging and the bush meat trade (hunting wild species for food). This trade has become lucrative and, as human populations increase, it is becoming a greater threat to many species’ survival.

Guests can visit the Zoo’s three Mandrills at ‘Monkey Trail in Lost Forest’. They share an exhibit with Guenons, including Spot-nosed Monkeys and Wolf’s Monkeys. 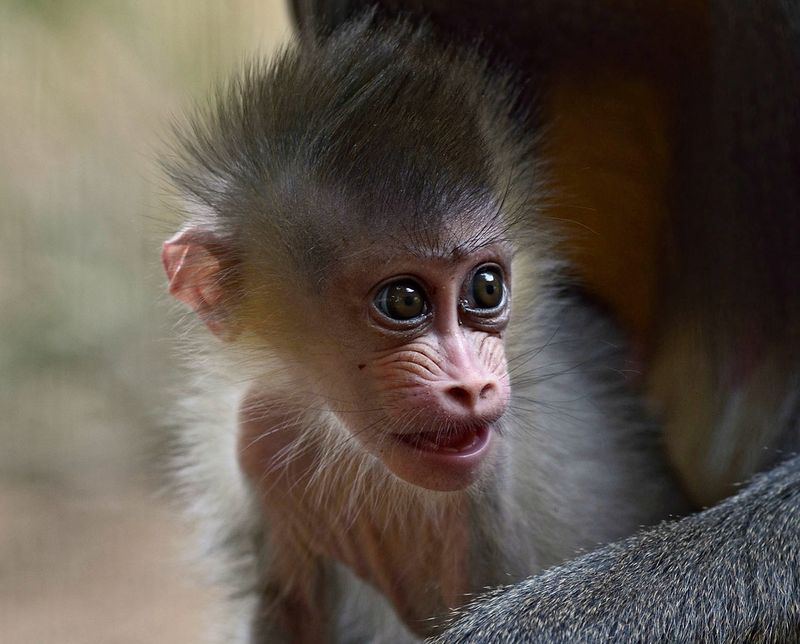 After 17 years without a newborn in the Mandrill troop, the staff at Israel’s Ramat Gan Safari Park is celebrating the arrival of a male infant. 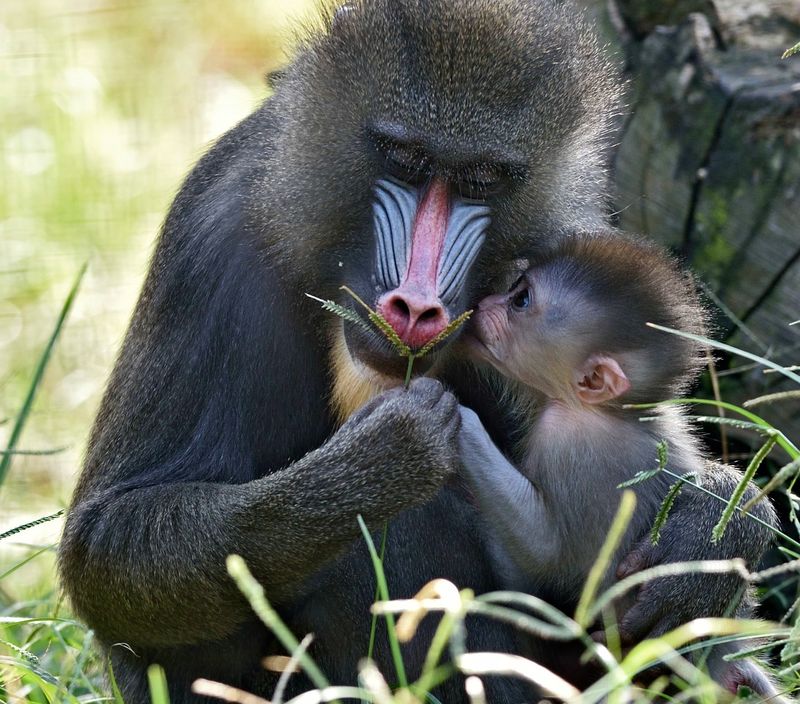 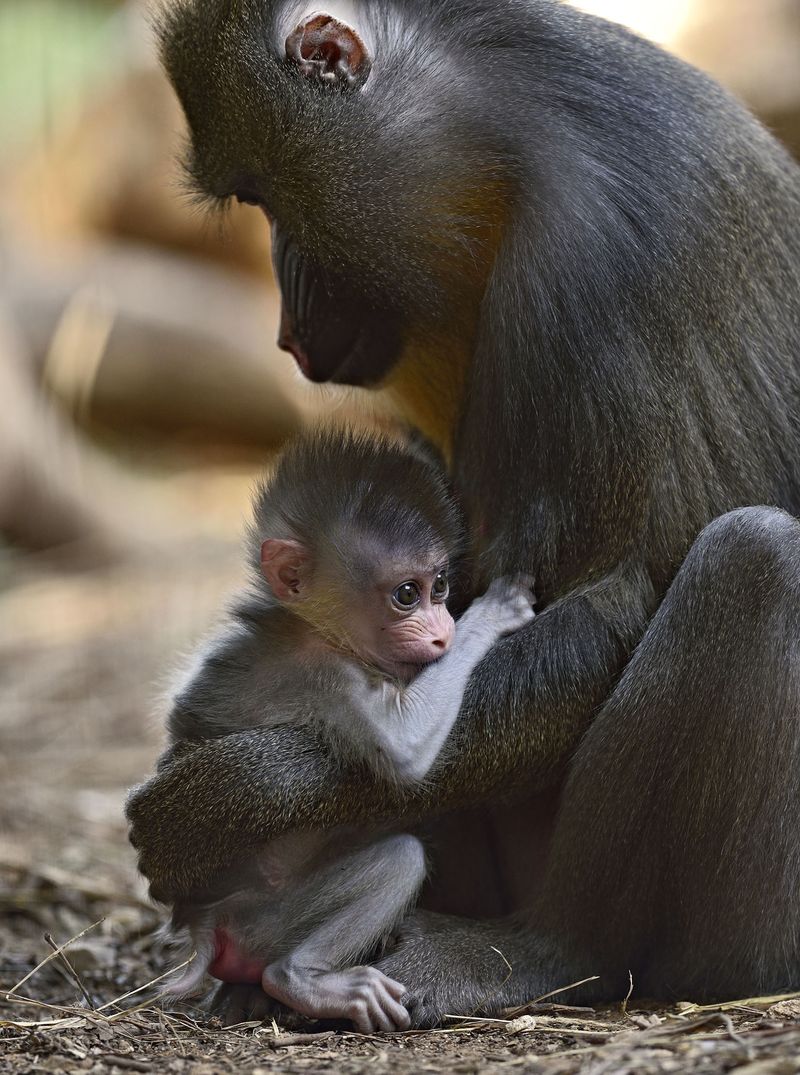 Born to 12-year-old Tinkerbell, the baby is strong and healthy.  Tinkerbell is proving to be a devoted mother to the baby, who was named Tuvia (a new baby’s name always begins with the first letter of the mother’s name).

Native to tropical forests in western central Africa, Mandrills are the largest of all monkey species.  Sexual dimorphism is extremely pronounced in Mandrills.  Males are about twice as large as females and feature red, purple, and light blue skin patches on their faces and rumps.  As Tuvia grows, he will gain the bright colors of an adult male, but for now he is more drably colored like his mother.

Mandrills are listed as Vulnerable by the International Union for Conservation of Nature.  Major threats include deforestation and hunting for bushmeat.  Some zoo-born Mandrills have been successfully reintroduced into the wild.

See more pictures of Tuvia below. 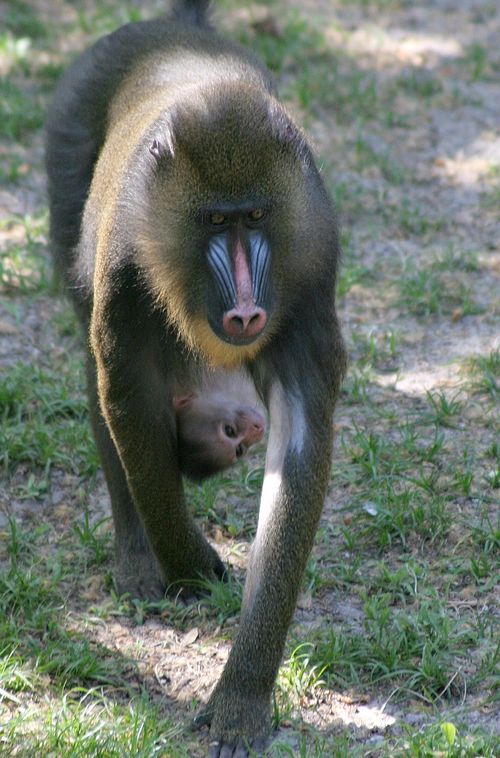 The Jacksonville Zoo and Gardens announced the birth of a Mandrill born on March 20 to 16-year-old dam Deanna, and 17-year-old sire Douglas. The gender of the infant is not yet known. Mother and infant are doing very well, and the baby appears strong and healthy. This marks the fourth offspring for Deanna and brings Jacksonville Zoo and Gardens’ mandrill collection to a total of five animals.

Kumani, another female offspring of Deanna’s, is currently sharing the living space with her mother and the newest addition and is gaining valuable experience by observing maternal behavior. Deanna and the little one were officially introduced to the public on March 23. From now on, they will rotate on and off exhibit with mandrills Douglas and Gucci.

Mandrills are the largest of all monkeys. Shy and reclusive, these primates are found only in African equatorial rain forests. They can easily be identified by their colorful blue and red facial markings and their bright pinkish-red behinds. Mandrills are threatened. Considered a delicacy by many Africans, they are hunted as bushmeat. In additon, the increase in the use of land for agriculture and human settlement is shrinking the rain forest they call home. 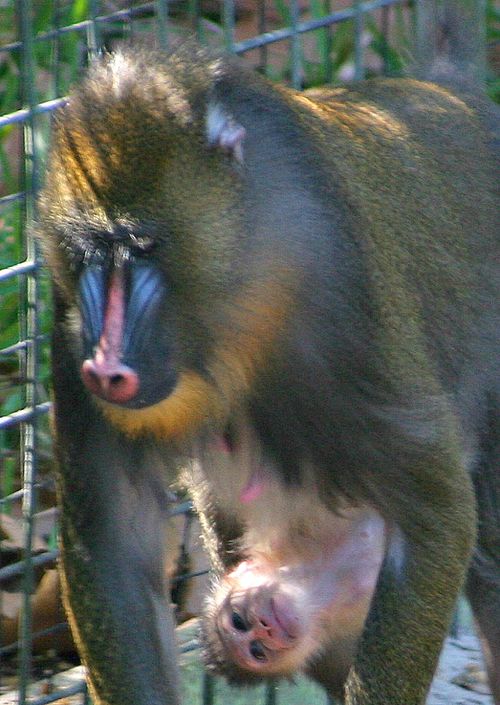 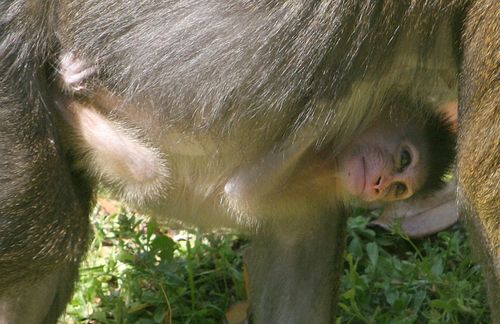 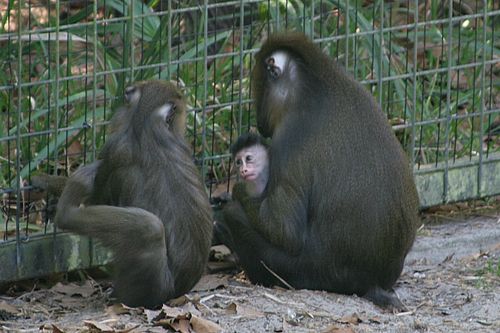 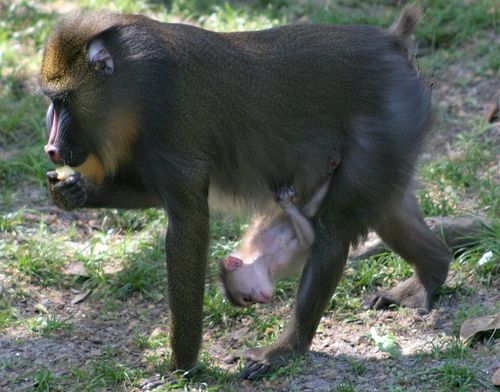 This past October Australia's Adelaide Zoo welcomed a newborn female Mandrill to first time mother Niari. Adelaide Zoo’s Mandrills have not bred in a number of years but first time mom Niari is reportedly doing quite well with her little one. To date no keeper assistance has been needed, which can be the case with some first time mothers. The baby is almost two months old now and can be seen throughout the exhibit riding along with Mom, suckling, and starting to explore her surroundings. Although inquisitive she still stays close to Niari. 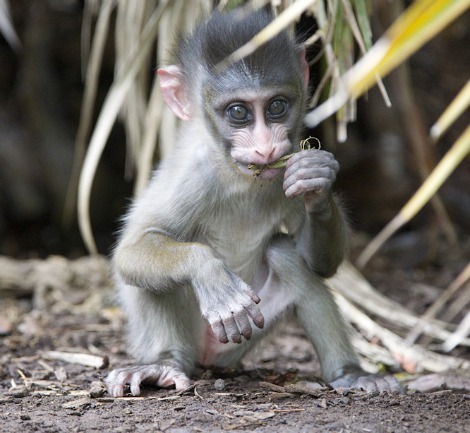 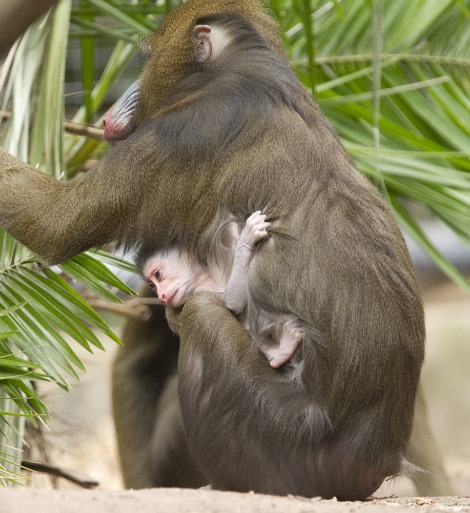 The Mandrill is the world's largest species of monkey and is found in the tropical rainforests and occasionally woodlands of southern Cameroon, Gabon, Equatorial Guinea, and Congo.  Mandrills are listed as vulnerable as a result of intensive hunting pressure and habitat loss across their native region. 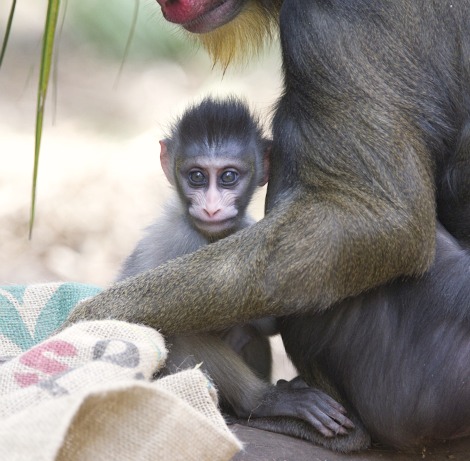 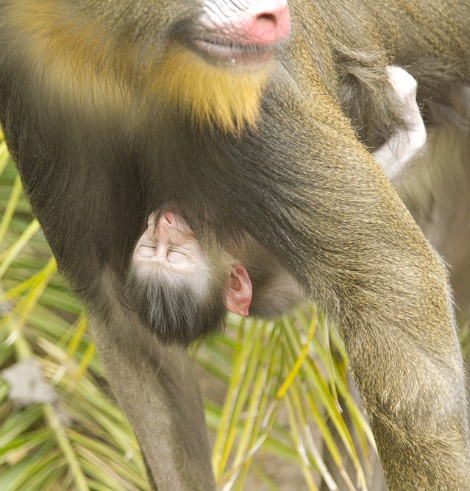 At the Bronx Zoo, Gertrude the mandrill baby treats her Congo Gorilla Forest home like a jungle gym—and her mom Louise as a giant plaything! The zoo's special exhibits season kicks off this weekend and Gertrude makes her debut. 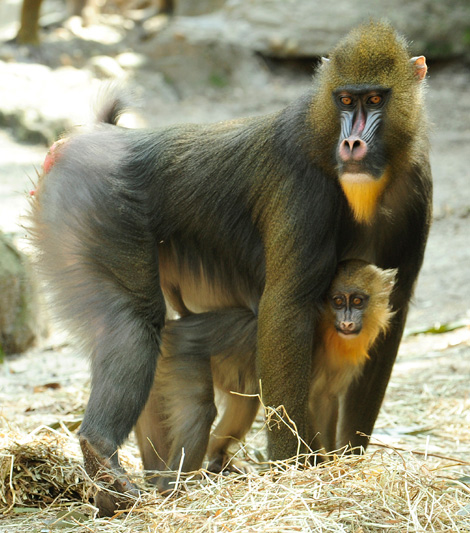 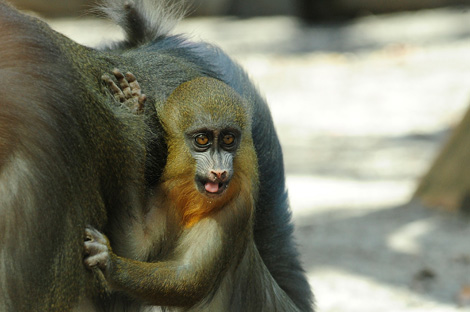 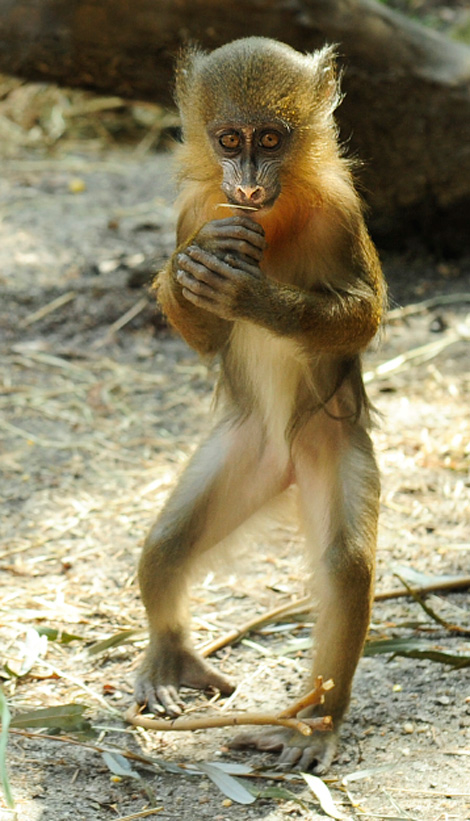 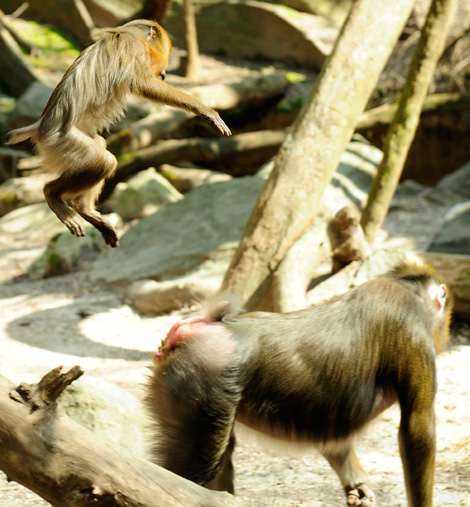