Lion Country Safari welcomed a male Southern White Rhinoceros calf to its herd on November 17th, 2021, the second calf born at the park this year. He is a significant contribution to the White Rhinoceros Species Survival Plan, a national collaboration to save the imperiled species from extinction. Both the calf, named Josh, and mom are spending some quality time bonding together in a maternity area, which is visible to guests from their cars in the drive-through safari.

Lion Country Safari is home to 15 White Rhinos – 11 females and 4 males and is a proud participant of the White Rhinoceros Species Survival Plan (SSP), a program of the Associations of Zoos and Aquariums (AZA).

BALTIMORE, MD -- The Maryland Zoo in Baltimore is welcoming a male lesser kudu calf, born on Monday, October 5, 2020 in the late afternoon.   The birth is the result of a recommendation from the Lesser Kudu Species Survival Plan (SSP), coordinated by the Association of Zoos and Aquariums (AZA). SSPs provide breeding recommendations to maximize genetic diversity, with the goal of ensuring the long-term survival of the AZA population and the health of individual animals.

The calf, which has been named Kadett, was born to seven-year-old Meringue and sired by ten-year-old Ritter. He is the second offspring for Meringue.  “The calf was standing and nursing within an hour of being born, which is very good. He has long, spindly legs and huge ears right now; he’s very cute at the moment,” said Erin Grimm, mammal collection and conservation manager. “Meringue is taking great care of him and we are pleased with his progress so far.”  Kadett stands about three-feet-tall and weighs in at about 14 pounds. “Right now he will remain in the barn bonding with Meringue for a couple of weeks. His first turn out into the habitat will be weather dependent, but we hope to have them outside before it gets too cold,” continued Grimm.

Lesser kudu (Tragelaphus imberbis australis) are one of eight species of African spiral-horned antelope. Male lesser kudu horns can grow to be 72 inches long, with 2 ½ twists. In the wild they live in dry, densely thicketed scrub and woodlands of northern east Africa. Interestingly, they rarely drink water, apparently getting enough liquid from the plants that they eat.  The Maryland Zoo’s kudu herd is made up of four animals and can be found in the African Watering Hole habitat along with addra gazelle and saddle-billed storks. 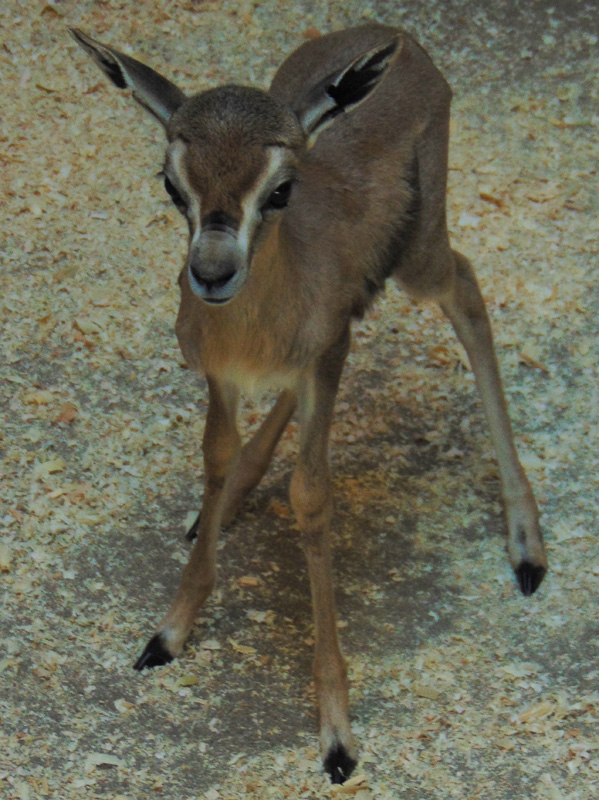 Over a 10-week period, from November 20, 2018, through January 30, 2019, eleven calves from six different ungulate species were born at the Saint Louis Zoo!

The new calves— three Speke’s Gazelles, two Addaxes, a Soemmerring’s Gazelle, a Grevy’s Zebra, two Lesser Kudus and two Lowland Nyalas — are healthy and have been bonding with their mothers behind the scenes at Red Rocks.

New zebra foal, Nova, and her mom can be seen in their habitat, weather permitting. 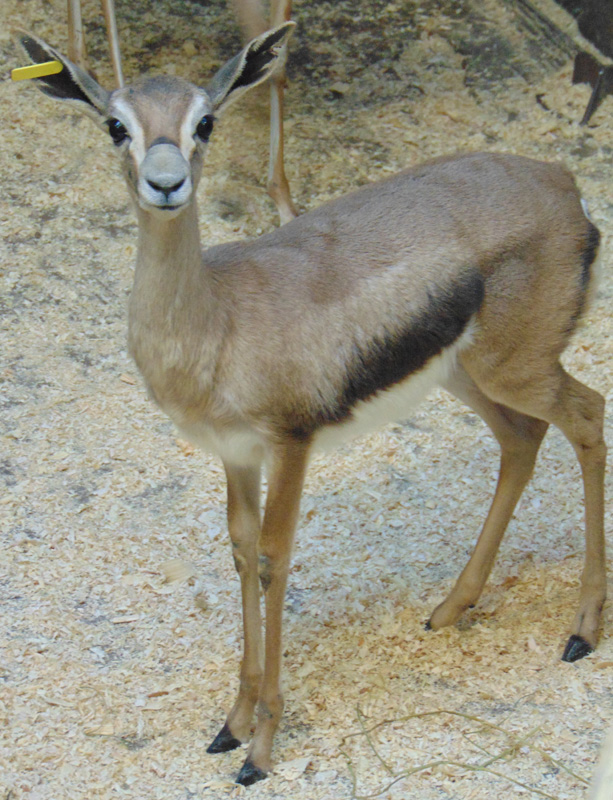 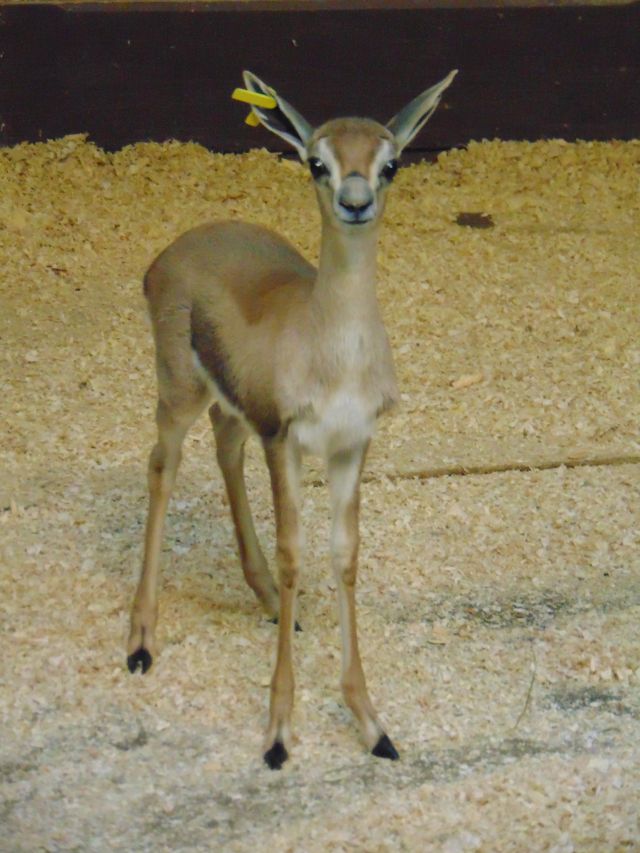 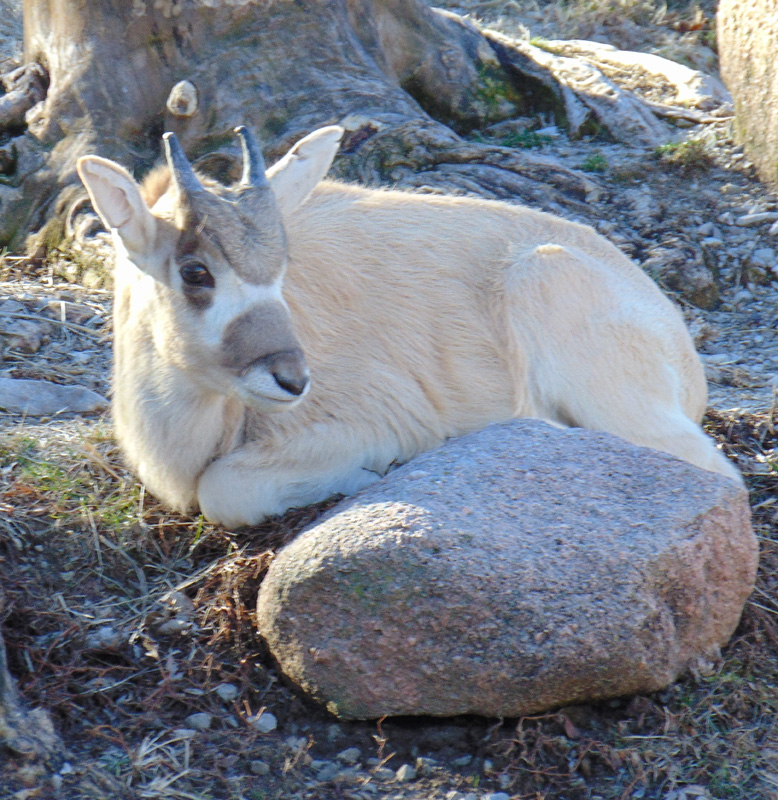 These important births were recommended by the Association of Zoos and Aquariums Species Survival Plans (SSP), which are responsible for maintaining genetically healthy populations of these ungulate species in North American zoos.

Five of these SSPs are coordinated by Zoo staff. The Saint Louis Zoo’s WildCare Institute Center for Conservation in the Horn of Africa and Saharan Wildlife Recovery Center supports conservation of unique species in Africa.

More great pics below the fold! 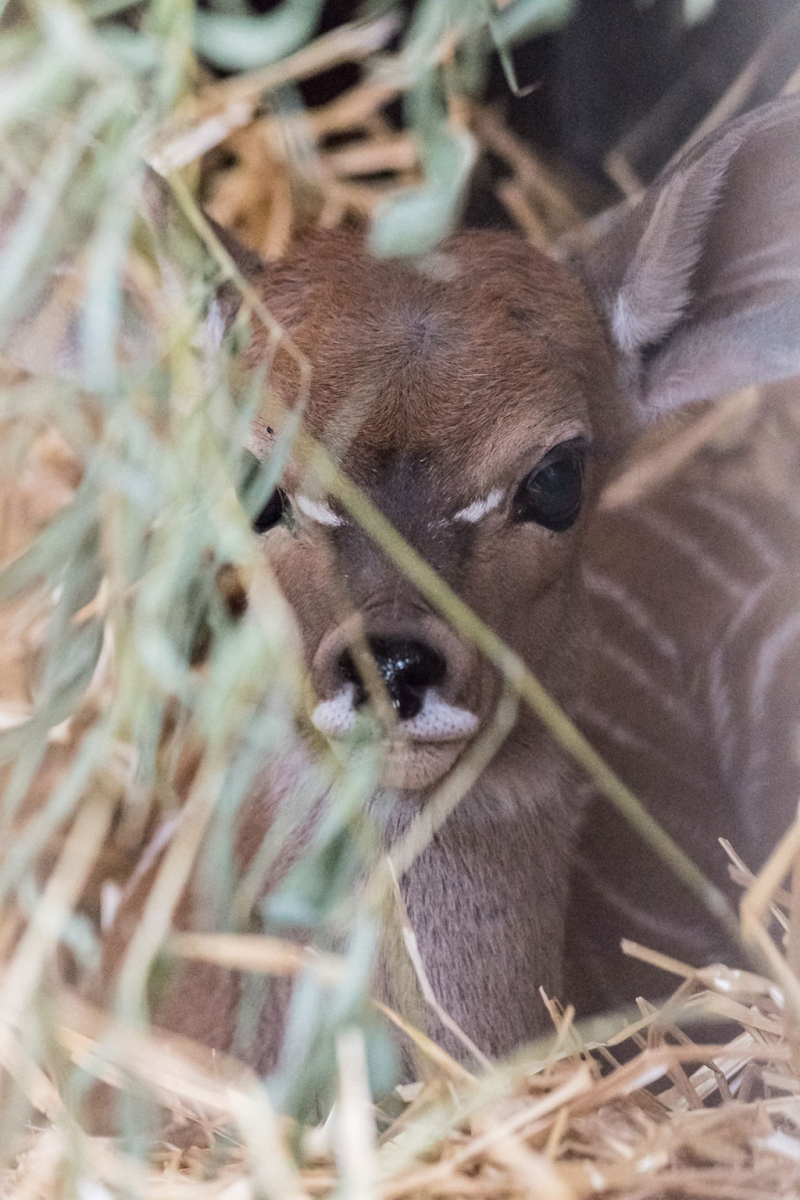 The Lesser Kudu herd at Zoo Basel welcomed a new calf. The young male was born October 29 to mom, Cony.

Keepers report that the little Kudu, named Namib, was standing within an hour of birth. Mom and calf have been bonding in the safety and warmth of their barn. Mom’s wild instinct is to keep her calf hidden from danger in a sheltered place, and the zoo’s barn allows her to act on these inclinations. After a few days, when the young calf is strong enough, mom will lead him to join the rest of the herd. 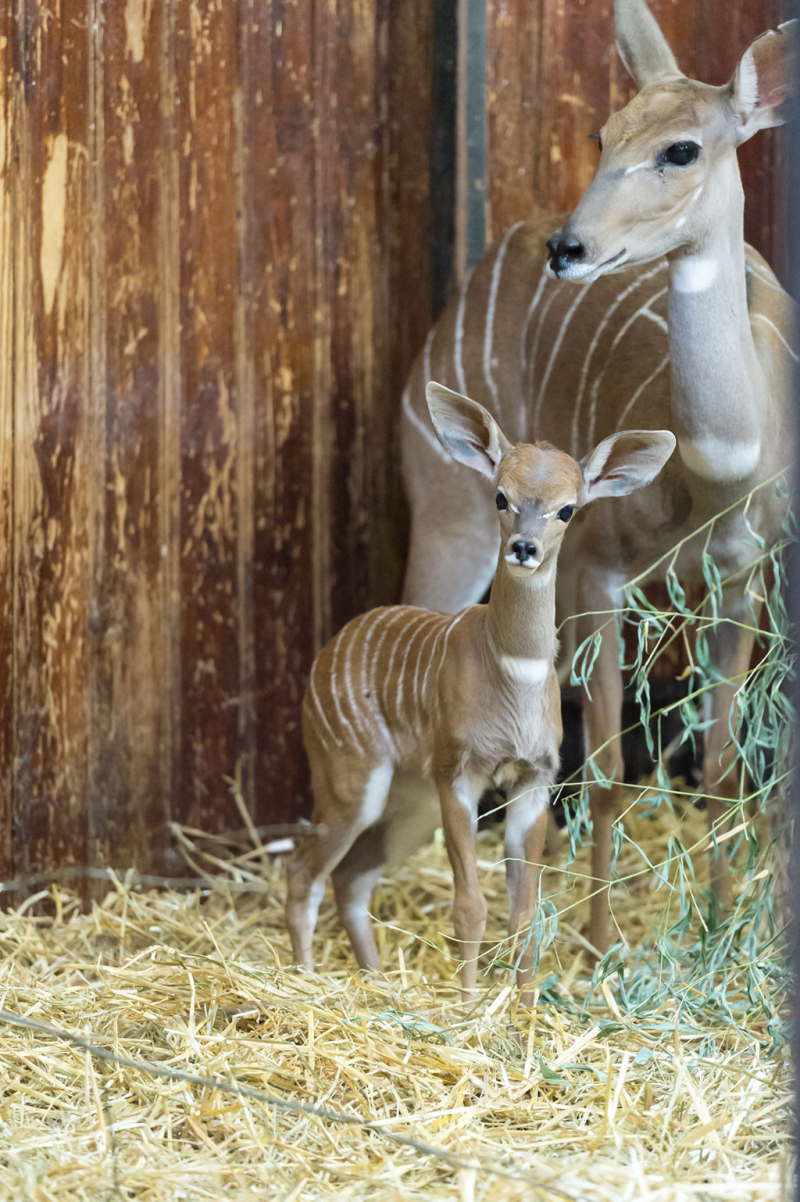 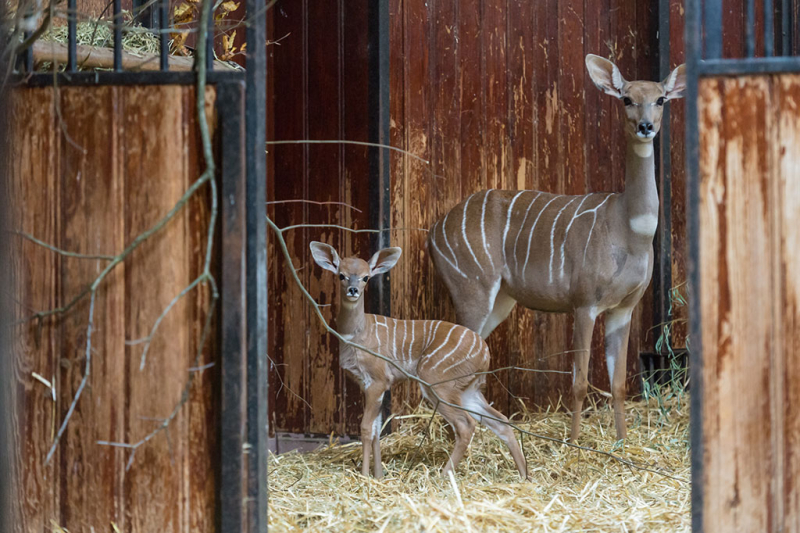 Doubling-Up on Cuteness at The Maryland Zoo 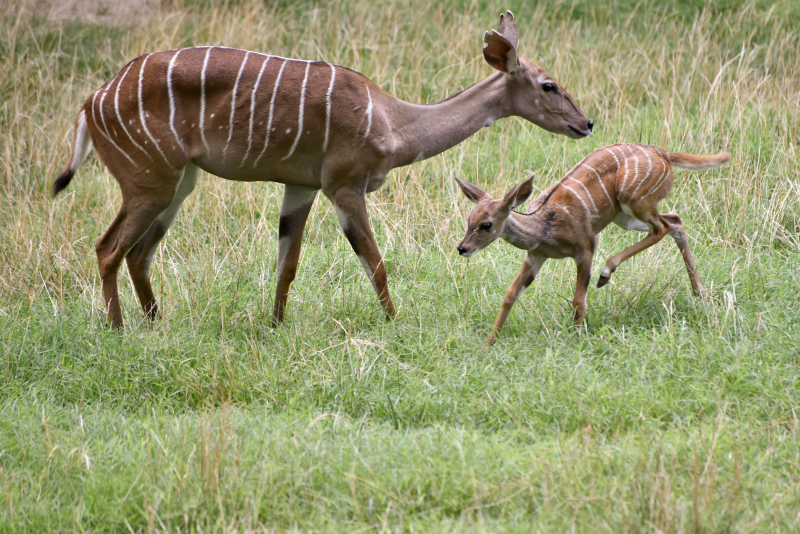 The Kudu calf was born to six-year-old Lemon and sired by five-year-old Ritter. He currently weighs almost 19 pounds and has been named Jalopy.

The Sitatunga calf, named Chopper, weighed 13.1 pounds at his first health check. His mother is six-year-old Lela, and the father is eight-year-old Lou. “The calves are being well cared for by their mothers inside their barns,” noted Margaret Inness, assistant general curator at the Zoo. “We like to give them time and space to bond during their early days and keep them as relaxed as possible for the health and wellbeing of all.”

Both calves now have limited access to the outdoor areas for a few weeks as they become acclimated to the yards and zoo visitors.

The Lesser Kudu calf had a few complications at birth, including a heart murmur discovered by veterinarians during his first health check. “This little guy had a bit of a rough start, but he’s nursing well and gaining weight as he should,” continued Innes. “Lemon is taking great care of him and we are pleased with his progress so far.”

Lesser Kudu (Tragelaphus imberbis australis) are one of eight species of African Spiral-horned Antelope. Male Lesser Kudu horns can grow to be 72 inches long, with 2 ½ twists. In the wild, they live in dry, densely thicketed scrub and woodlands of northern east Africa. Interestingly, they rarely drink water, apparently getting enough liquid from the plants that they eat.

At The Maryland Zoo, the Lesser Kudu herd of five can be found in the African Watering Hole exhibit, along with Addra Gazelle and Saddle-billed Storks.

The Sitatunga (Tragelaphus spekii) is a species of antelope native to Central Africa. They live in semi-aquatic swamps, marshes and flood plains. Outside of protected areas, Sitatunga are vulnerable to over-hunting and habitat loss, as people drain and develop swampland. Currently, however, Sitatunga are not classified as threatened or endangered.

The Maryland Zoo’s Sitatunga herd is made up of ten animals, including the new calf, and can be found in two exhibit spaces along the boardwalk in the African Journey section of the Zoo.

Both of the calves’ births are the result of a recommendation from the Species Survival Plan (SSP) for each species, coordinated by the Association of Zoos and Aquariums (AZA). SSPs provide breeding recommendations to maximize genetic diversity, with the goal of ensuring health of the individual animal, as well as the long-term survival of the species population to help save animals from extinction.

More great pics, below the fold!

Continue reading "Doubling-Up on Cuteness at The Maryland Zoo" » 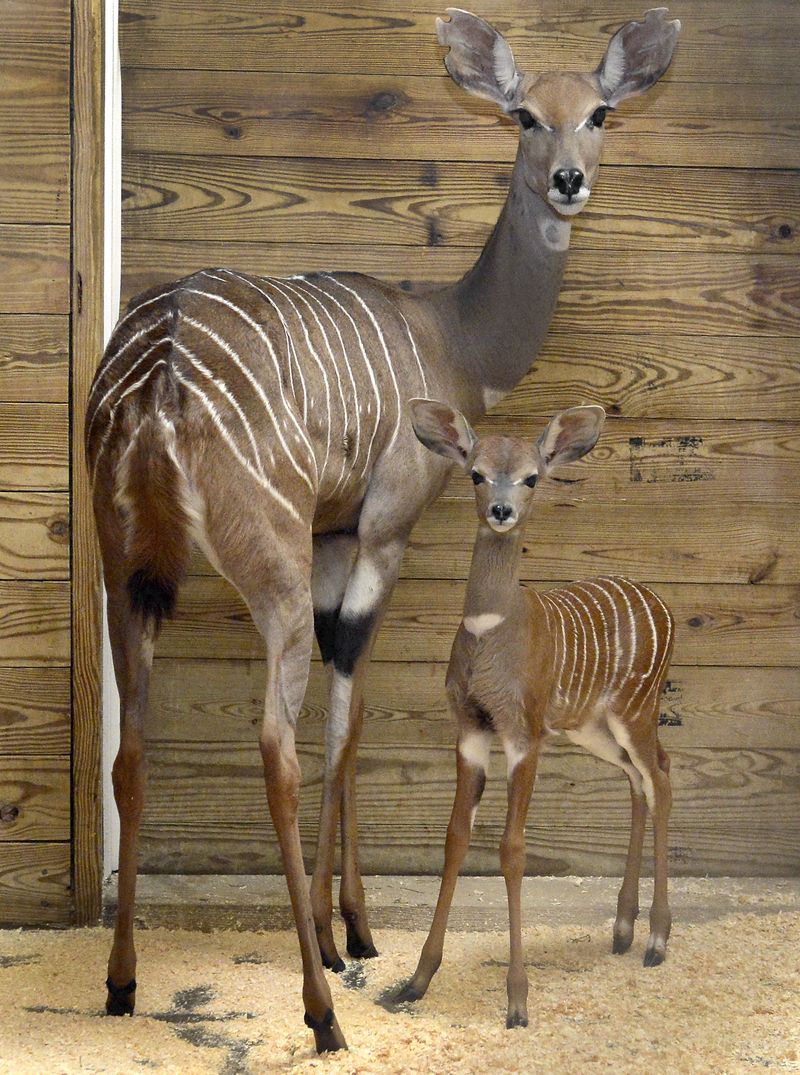 The Maryland Zoo, in Baltimore, recently welcomed a male Lesser Kudu on December 18, 2015…the first Lesser Kudu to be born at the Zoo! 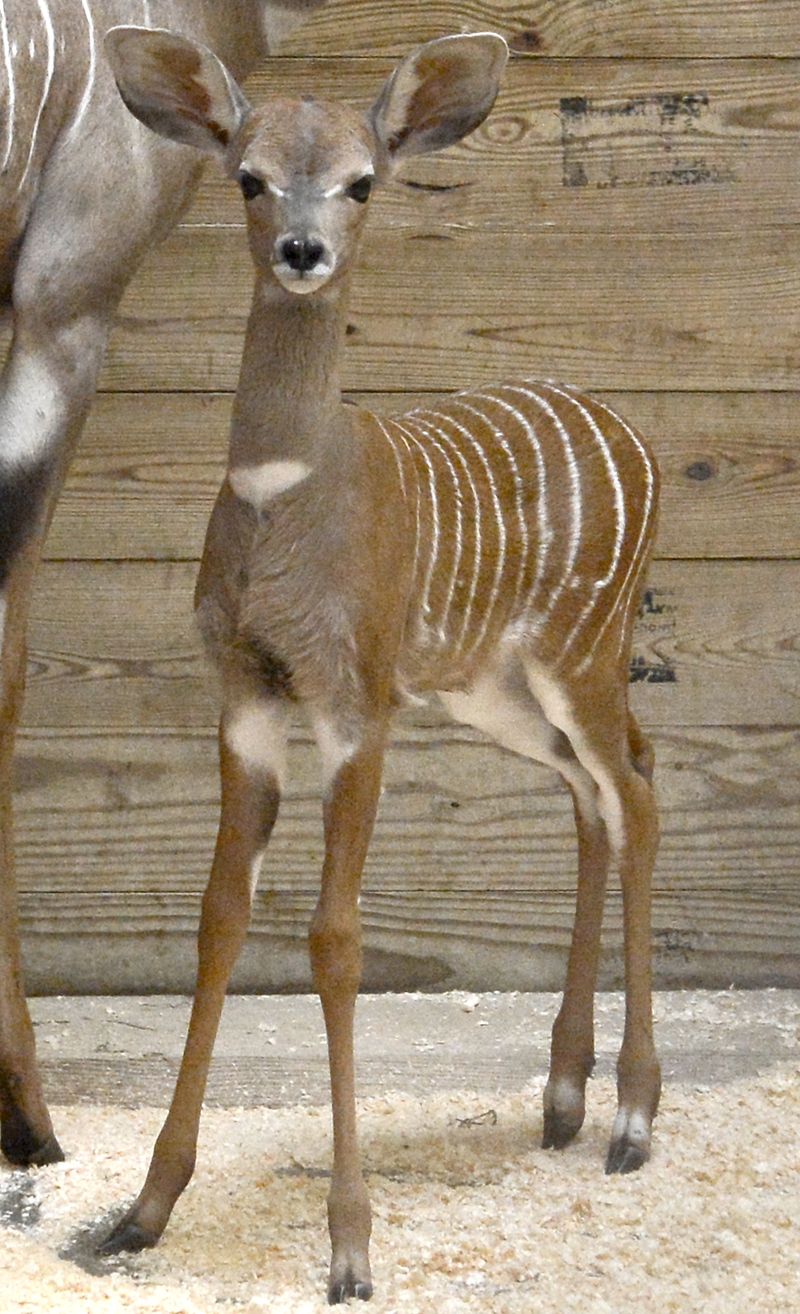 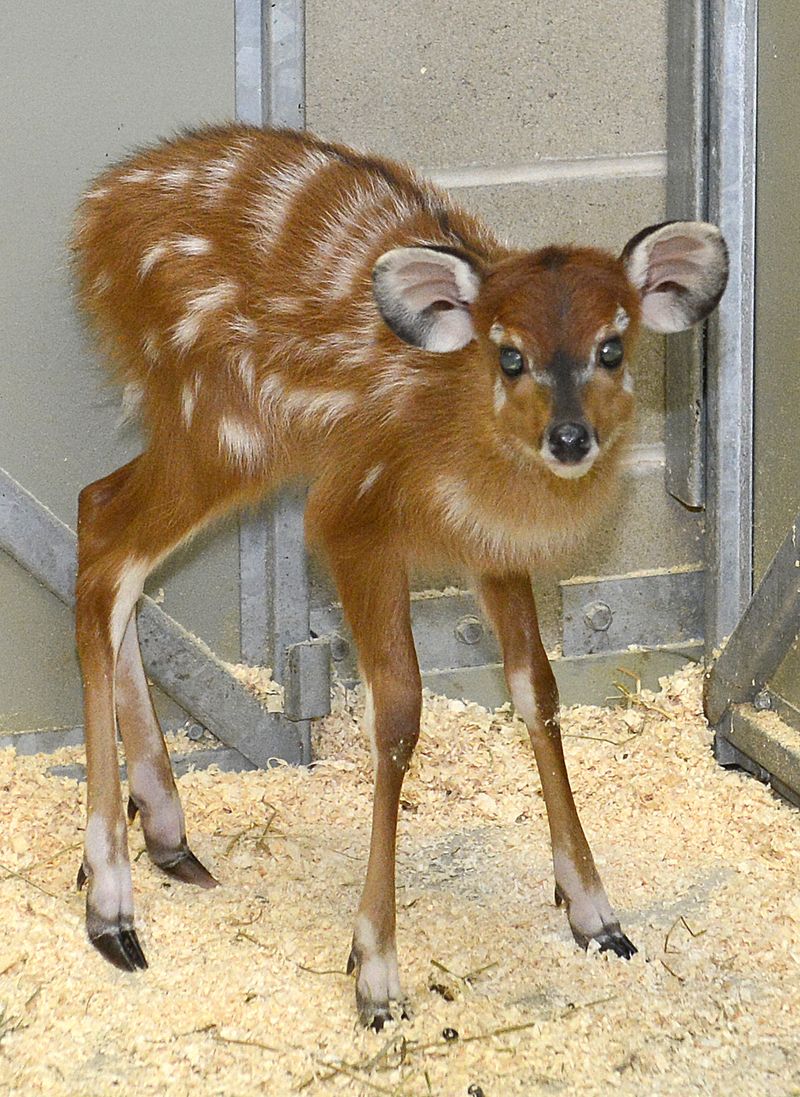 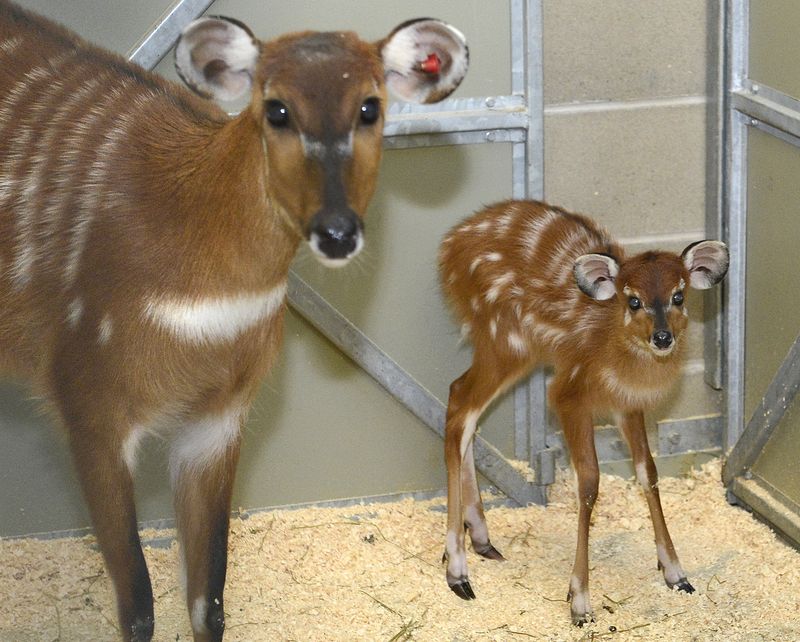 The first of the female Sitatunga calves was born to two-year-old Remy and has been named Jess by zookeepers. She currently weighs approximately 21 pounds. The second female calf, named Noel, weighed almost 15 pounds at her last health check. Her mother is two-year-old Mousse. Eight-year-old Lou sired both girls.

“Both calves are healthy and are being well cared for by their mothers, inside the warmth of the Africa Barn,” stated Carey Ricciardone, Mammal Collection and Conservation Manager at the Zoo. “As a first time dam, Mousse is very protective of Noel, but Remy is a much more relaxed mother.”

Both calves will remain behind the scenes in the barn until warm weather returns.

The male Lesser Kudu calf, Kaiser, was born to two-year-old Meringue and sired by five-year-old Ritter. “This little guy has long, spindly legs and huge ears right now; he’s adorable,” continued Ricciardone. “Meringue is taking great care of him and we are pleased with his progress so far.”

Kaiser stands about three-feet-tall and weighs in at 26 pounds. He will also remain off exhibit with his mother until spring. This big eared baby kudu was born on Agust 31 in The African Forest at the Houston Zoo. She weighed approximately 15.9 kilos ( 35 pounds) at birth. Her keepers say, "She is bright eyed and quite curious - she's always looking around."

Gestation for Greater kudu is about 9 mo. Her mother, Clementine, has proven to be very good with her baby. "The birth was easy. It started in the afternoon and was all of two hours. And the baby nursed right away," the keeper continued. "The calf is doing well and being slowly introduced to the rest of her herd - dad Alfonzo and female Charlotte and her offspring Apollo".

She has yet to be named. The kudu share the habitat with a trio of Southern White rhinos in The African Forest. The newest member of the kudu family will be out in the exhibit after introductions to the rhinos occur. 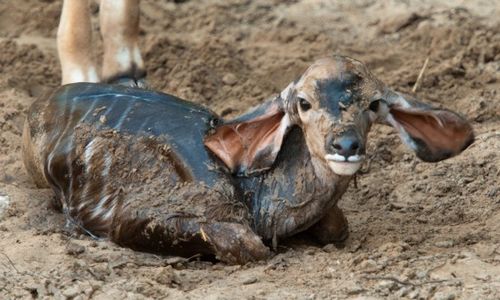 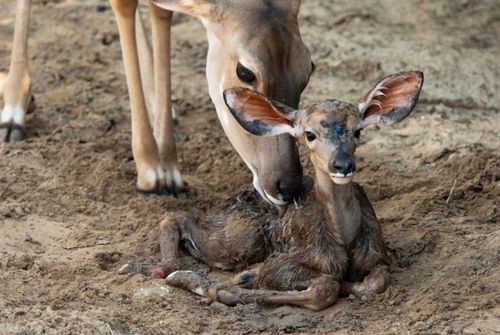 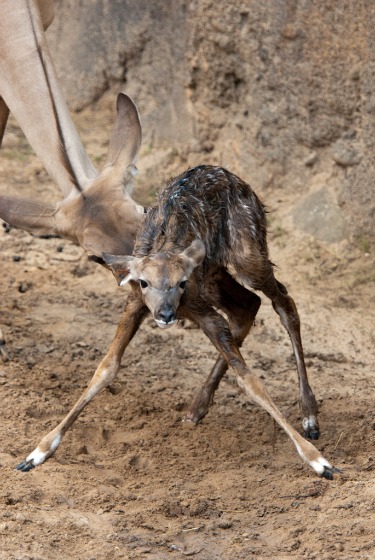 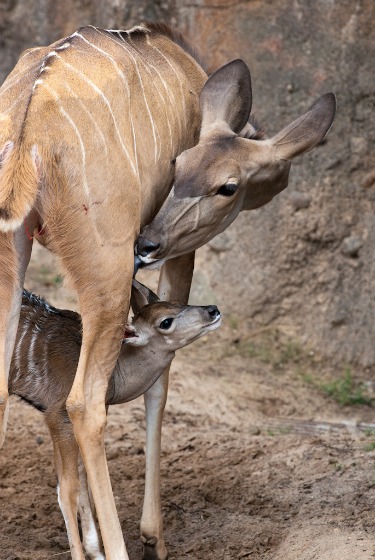 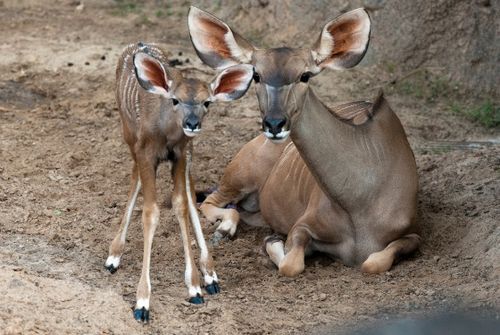 You can view a full photo album on the Houston Zoo's website.

The Kudu is a forest antelope native to eastern and southern Africa. This baby girl was born September 23rd at Switzerland's Zoo Basel, which seems to have no end of rare babies and outstanding pictures. Little "Giza", pictured below, is actually a Lesser Kudu, the smaller of the two Kudu species. On a side note, species are commonly named "lesser" to indicate a smaller sized species within the same genus. It is not intended as an insult. 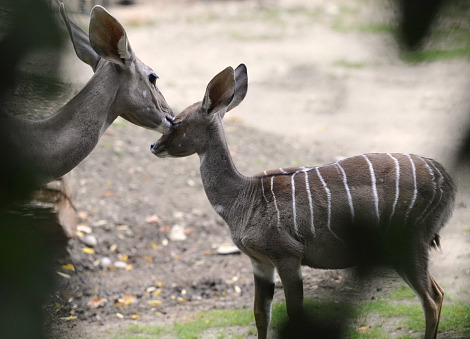 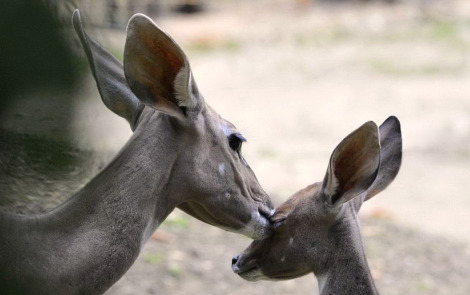 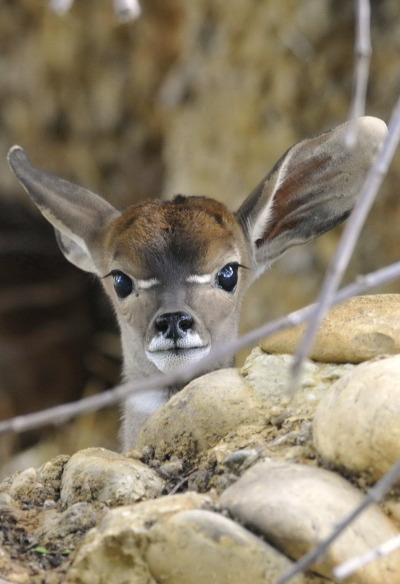 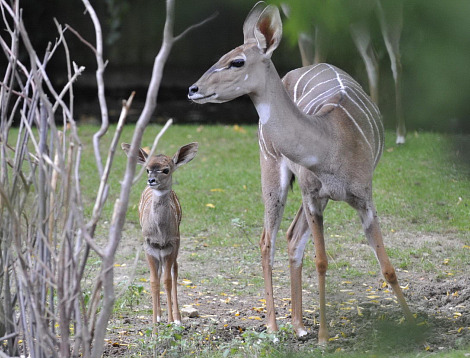