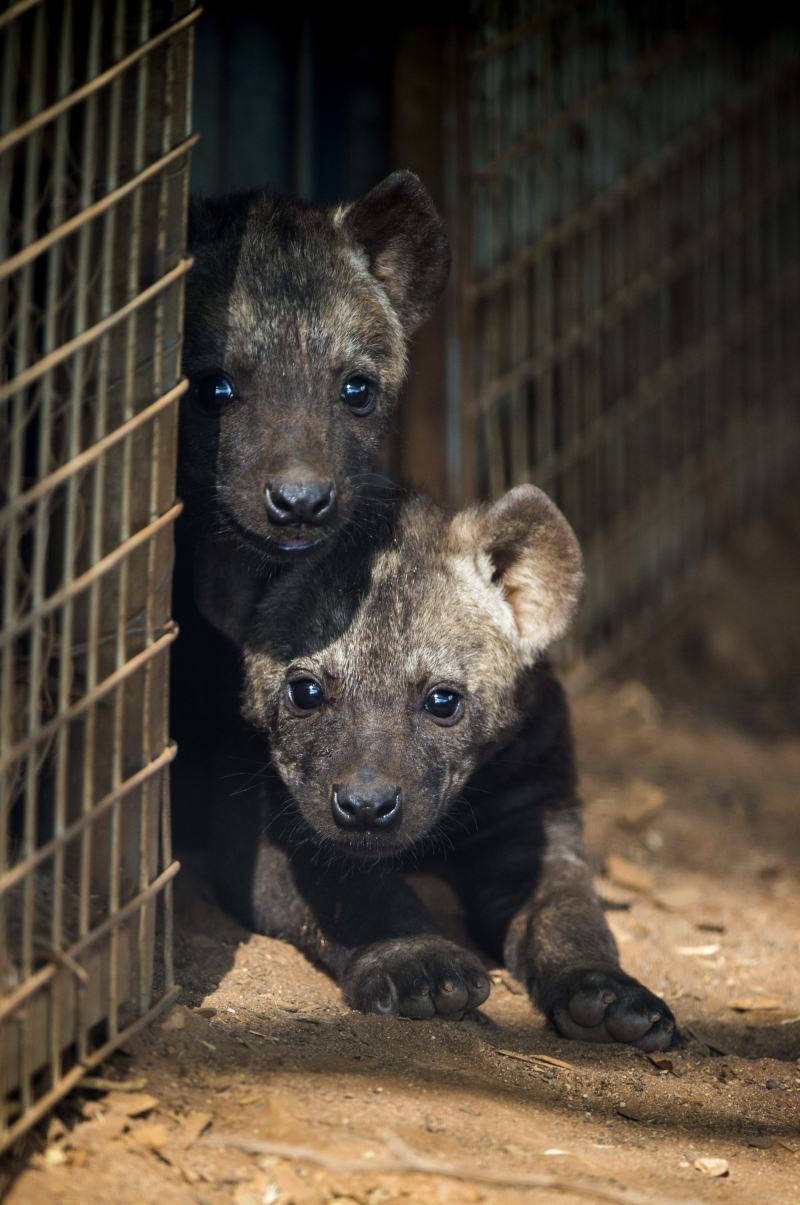 “Thandi is doing incredibly well as a first-time mum,” Rachel said. “Due to their unique reproductive anatomy, first-time Hyena mums have a very high chance of something going wrong during birth, and a high percentage of first-time mothers in the wild die, so it’s incredible to see Thandi successfully rearing two cubs.”

Rachel continued, “It’s also really exciting to see Piltengi father his first cubs, as he has wild parentage which provides incredibly valuable genetics for the region.” 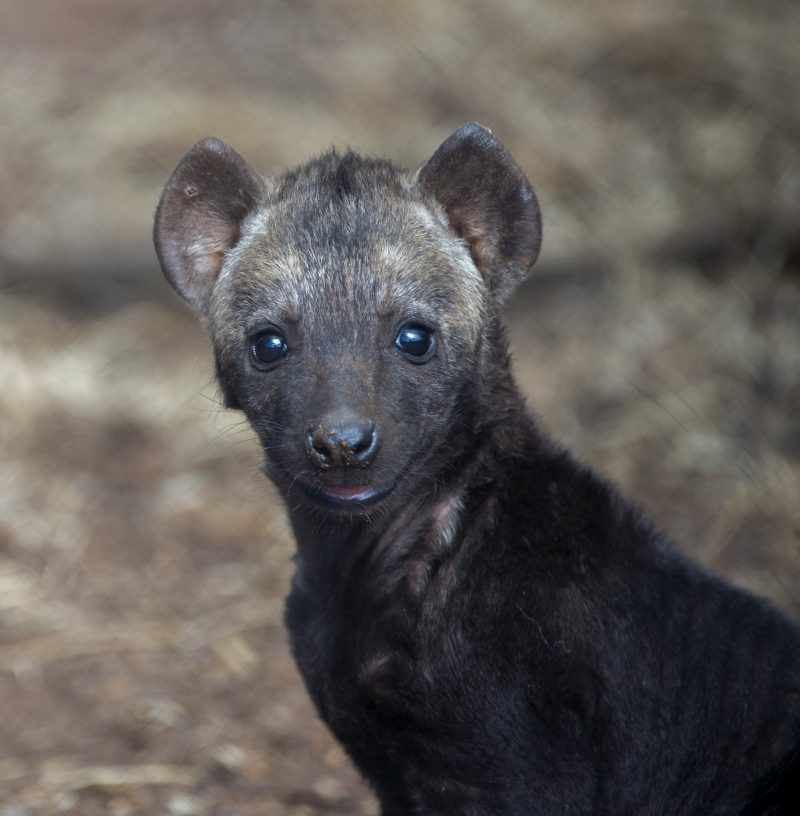 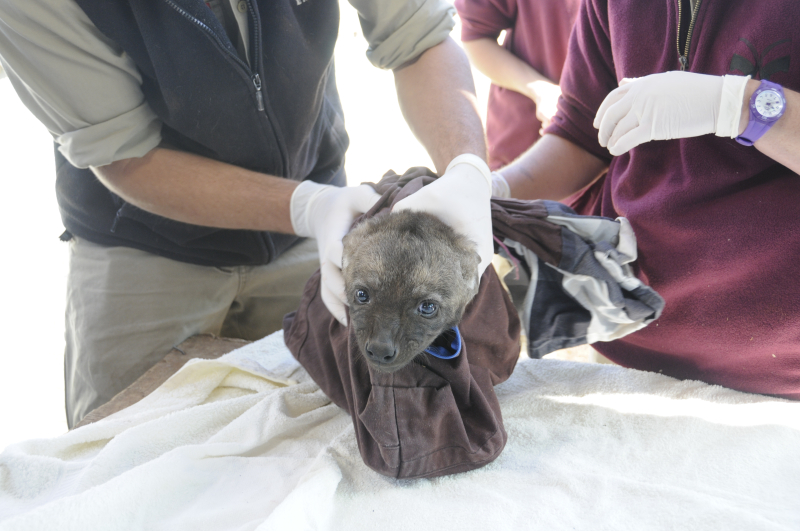 The cubs are currently spending most of their time in a private habitat with their parents and grandma, Kigali. Keepers expect they will be ready for their big public debut in a few months, once they become more confident.

“The cubs are still quite shy, sticking close to mum and their den, but every day they grow a little more confident,” Rachel Robbins said. “For now, the best time to catch a glimpse of the youngsters is during our ‘Lions at Bedtime’ tour.”

As a conservation charity that exists to save species from extinction, Monarto Zoo is proud to have bred a total of ten Spotted Hyena. The newest little cubs will act as ambassadors for their species, educating Australians about the plight of their wild cousins.

The Spotted Hyena (Crocuta crocuta), also known as the Laughing Hyena, is a species currently classed as the sole member of the genus Crocuta. It is native to Sub-Saharan Africa and is currently listed as “Least Concern” by the IUCN. The Spotted Hyena has a widespread range and large numbers, estimated between 27,000 and 47,000 individuals, however, the species is experiencing declines outside of protected areas due to habitat loss and poaching.

Hyenas can sometimes be a misunderstood species, but, in fact, they are excellent hunters with a success rate of up to 95 per cent, are extremely intelligent and have wonderful characters. 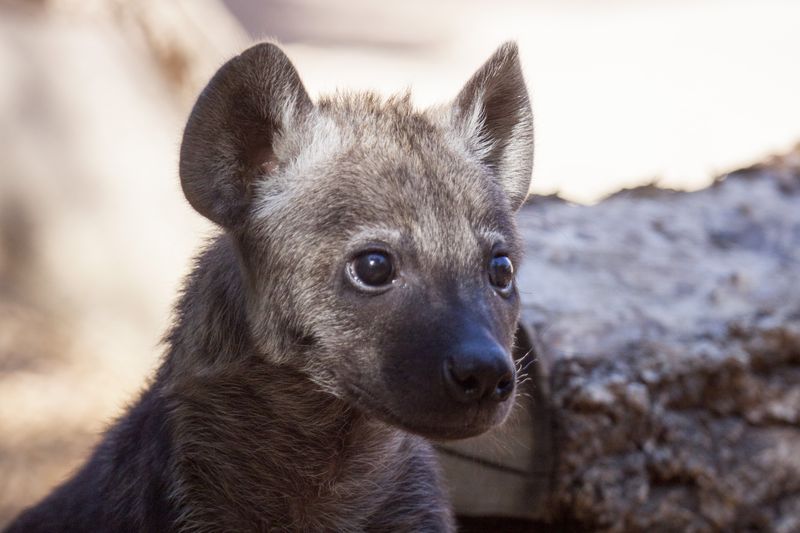 In early August, ZooBorns brought you a story about three Spotted Hyena cubs that were flown to Denver Zoo. The trio, made up of females Nia (NEE-yah) and Tavi (TAH-vee), and male Kelele (keh-LAY-lay), just cleared their mandatory quarantine period, and can now be seen by visitors inside the Pahali Mwana yard within the Denver Zoo’s Predator Ridge exhibit. 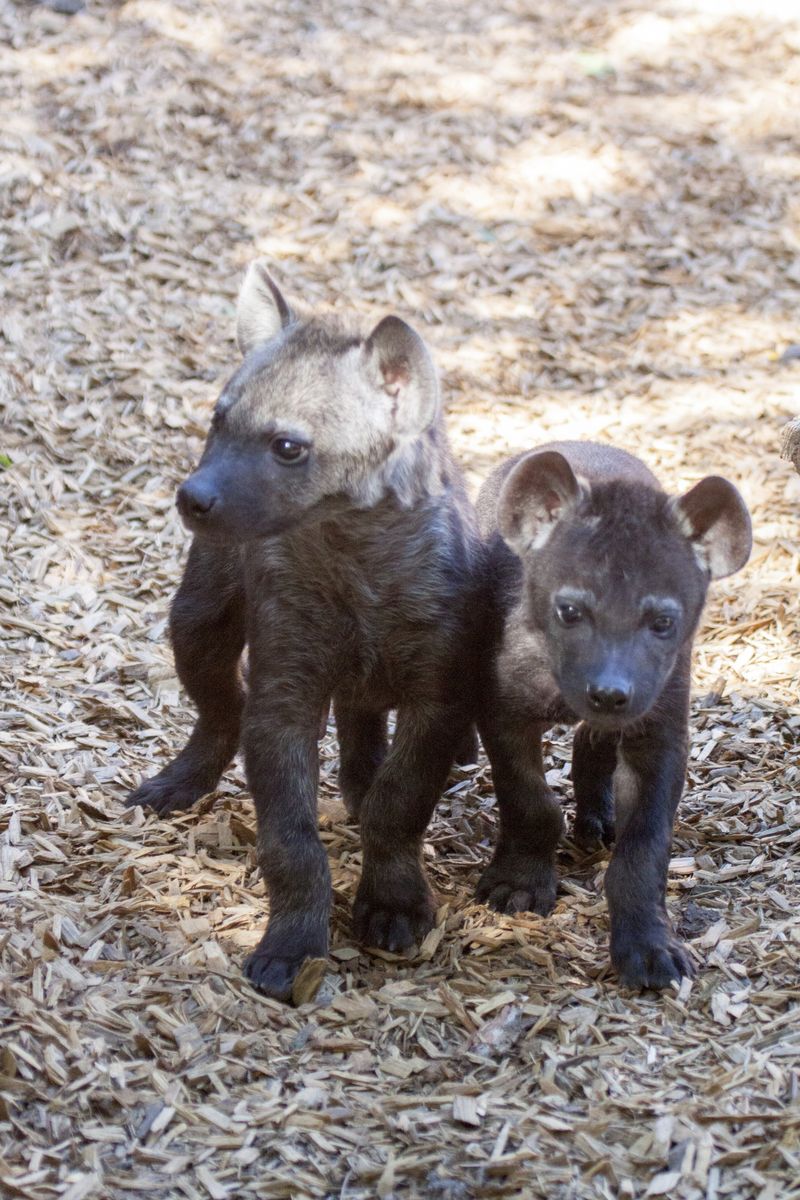 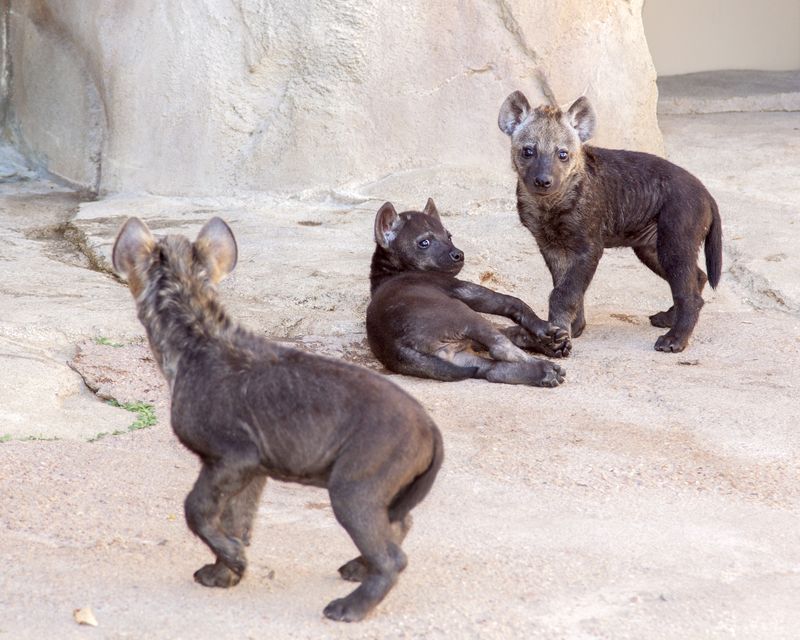 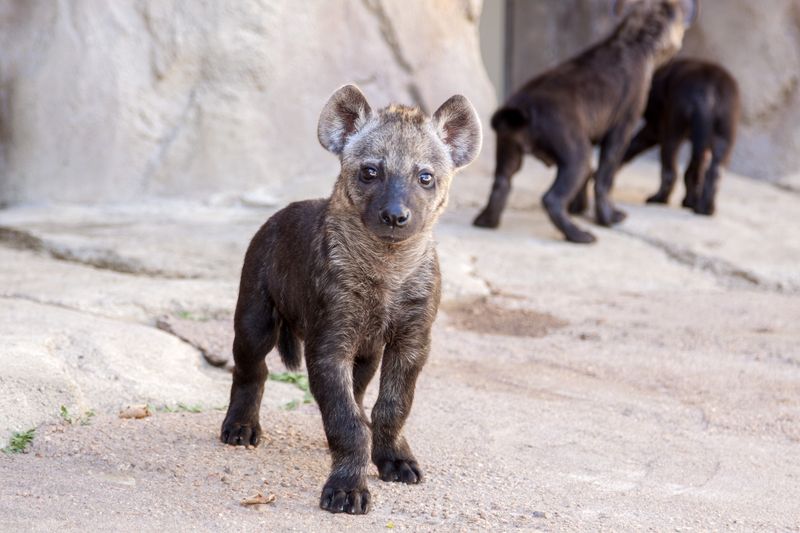 The cubs are becoming more confident as they explore their maternity yard in short stints. Zookeepers only keep them out for a couple hours each day, as they are young and tire quickly, and they still need a few more vaccinations before they are allowed out unsupervised. Hyenas have a matriarchal social structure, and zookeepers have observed that Nia has established herself as the leader of this new, young clan.

Kelele was born on June 26 and arrived from the Buffalo Zoo on July 31. Nia and Tavi were born on June 11 and arrived from Kapi’yva Exotics, a private facility in Houston, Texas that specializes in the propagation of rare and endangered species, on August 1. They all came to Denver Zoo through recommendations of the Association of Zoos and Aquariums (AZA) Species Survival Plan (SSP), which ensures healthy populations and genetic diversity among zoo animals. Kelele’s mother and both of the female cubs’ parents are all from Africa, making their genetics extremely valuable to the North American population, as they are unrelated to most other Hyenas in U.S. zoos.

Kelele, named after the Swahili word for “noisy,” was born to a mother that historically has not cared for her cubs. Zookeepers had been hand-rearing him and wanted to provide him with a clan with which to socialize. Arrangements were then made to have him join the two female cubs, which had already been scheduled to arrive at Denver Zoo. This is very similar to how Hyena cubs grow up in the wild. A mother will place her cub with others of various ages in a communal den. The cubs will then only come out to nurse until they are older. 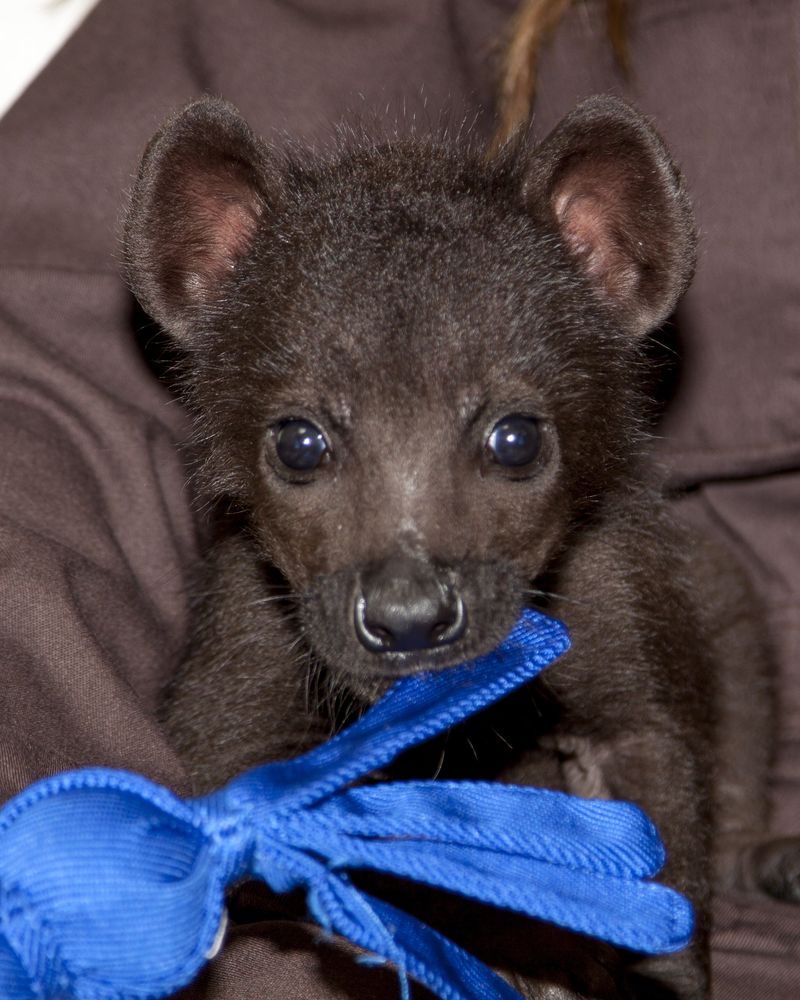 Denver Zoo is now the new home of three Spotted Hyena cubs!   Kelele (keh-LAY-lay), a male born on June 26, arrived from the Buffalo Zoo on July 31.  On August 1, two unnamed females, born June 11, arrived from Kapi’yva Exotics, a private facility in Houston, Texas, that specializes in the propagation of rare and endangered species. The cubs must first pass a mandatory, month-long quarantine before visitors can see them. 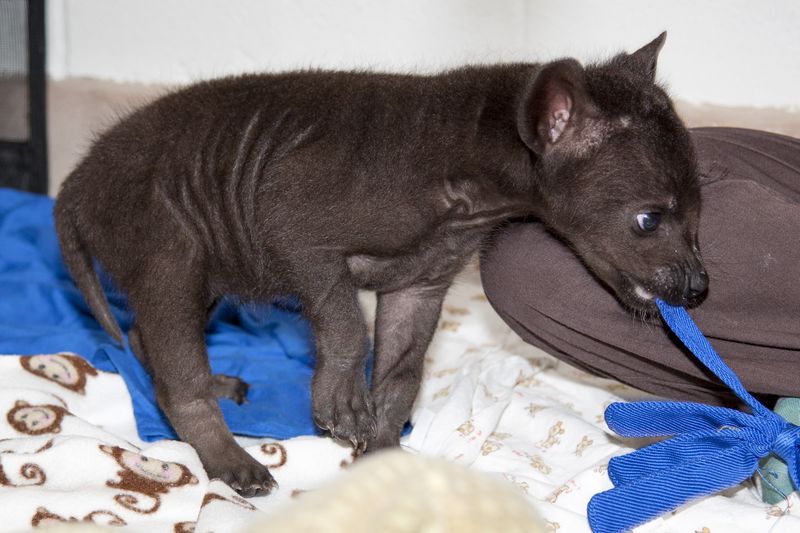 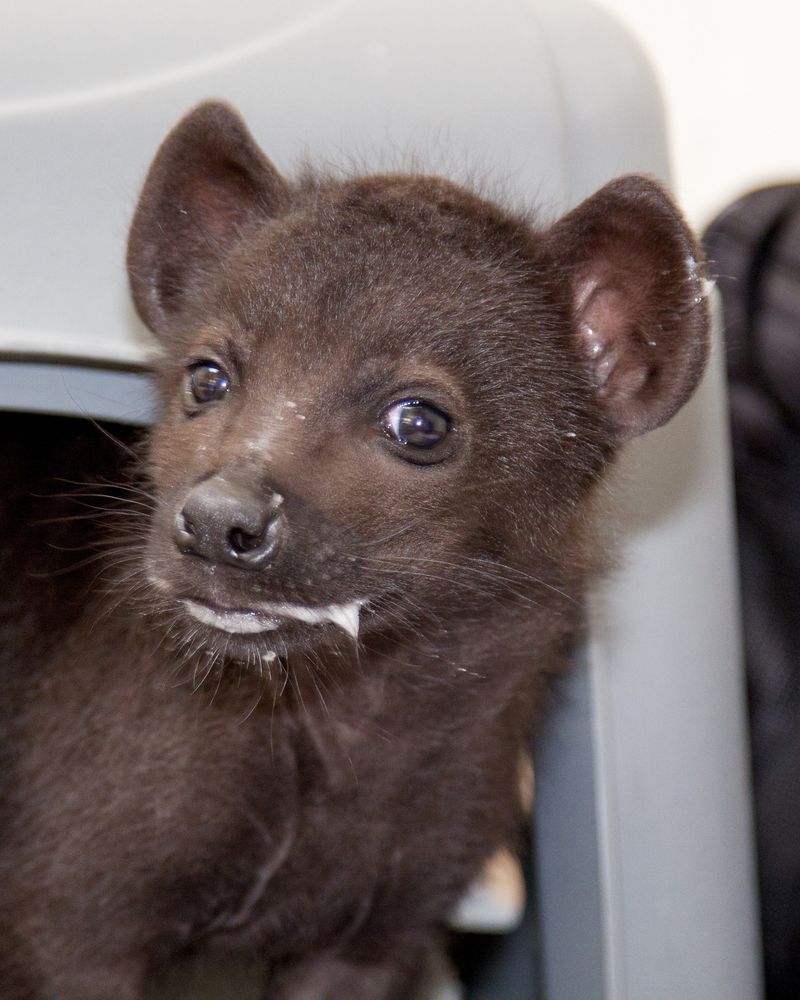 The three cubs arrived at Denver Zoo through recommendations of the Association of Zoos and Aquariums (AZA) Species Survival Plan (SSP), which ensures healthy populations and genetic diversity among zoo animals. The female cubs’ parents and Kelele’s mother are all from Africa, making their genetics extremely valuable to the North American population as they are unrelated to most other hyenas in U.S. zoos.

“These animals are critical to the survival of Spotted Hyenas in AZA-accredited zoos, and we have been working to bring more hyenas to Denver Zoo for at least two years,” says Denver Zoo’s Curator of Large Mammals, Hollie Colahan. “This is a great example of cooperation between an AZA zoo, a private facility, and Denver Zoo to support the SSP's goals for a sustainable population.”

Hyena Cub Will Earn His Spots at Berlin Zoo 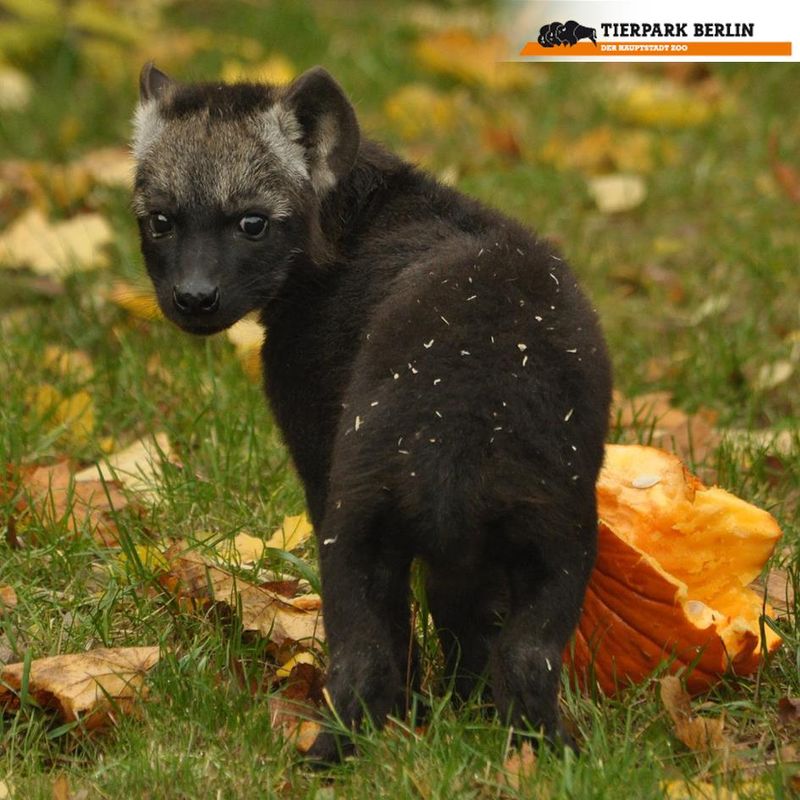 On July 27, a Spotted Hyena named Malindi gave birth to a healthy male cub at Berlin Zoo. The cub, named Toki, was born with a beautiful black coat, which will start to lighten over the next few weeks to resemble his parent's speckled fur.

The cub's father, Kara, also lives at Berlin Zoo. But as in the wild, he won't play a role in rearing his offspring. In Hyena packs, females are dominant over males, and raise their pups on their own, so it's understandable that Kara keeps a bit of distance from the rest of the family. 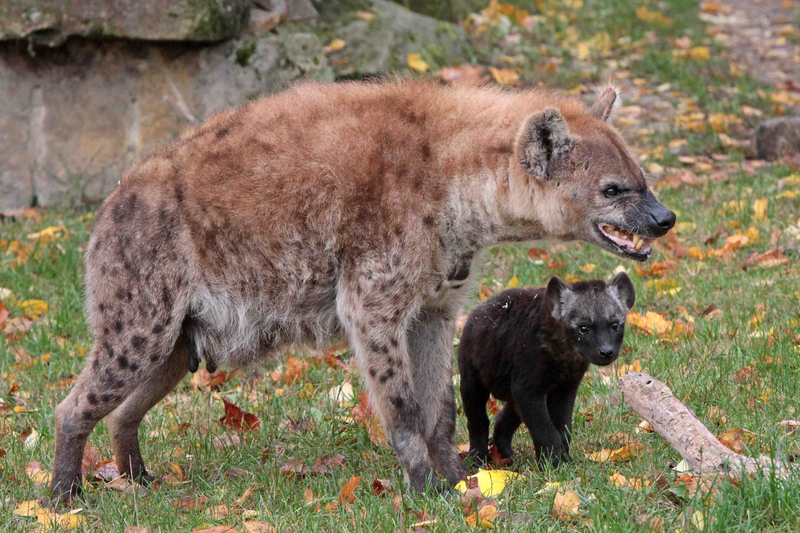 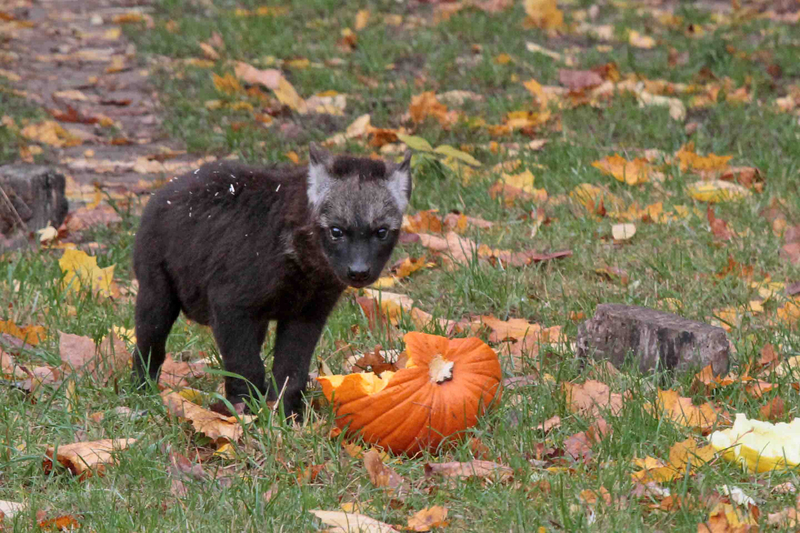 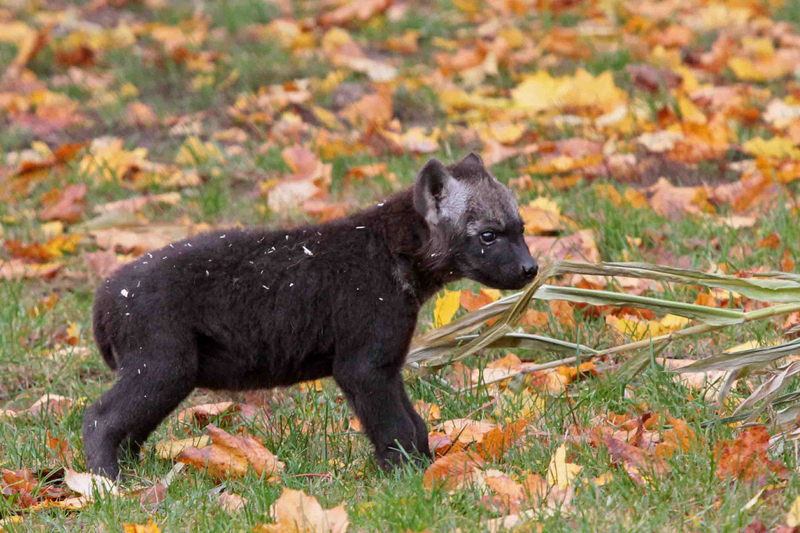 Spotted Hyena are common on the savannas of sub-Saharan Africa. They were long seen as scavengers, but they are in fact persistent hunters, capturing up to 70% of their own food themselves, including large like gazelles, wildebeest and zebras.

First C-Section Delivery of a Hyena Pup In Australia's History 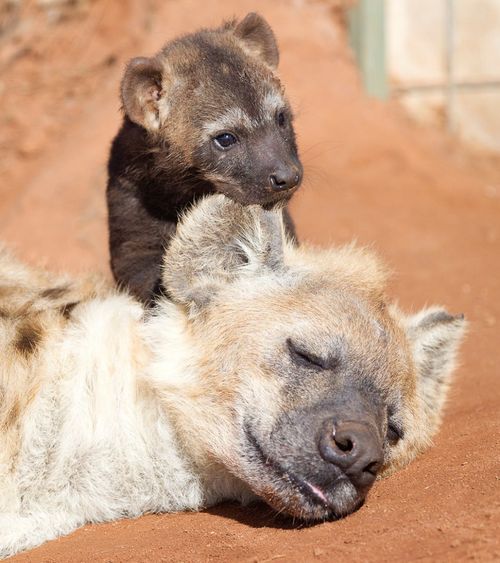 Monarto Zoo's Spotted Hyena Mom Kigali and her daughter Forest both gave birth recently to healthy cubs. They are the only female Spotted Hyena in Australia. Kigali is the dominant female of the clan. Her cub, named Pinduli, was born back on June 12, shortly after 2:00 a.m.. She had him in a den on exhibit which meant no one had the opportunity to see him for around four months.  Keepers monitored Mom and baby via cameras set up in the den prior to the birth. Thanks to that,  you can watch Kigali giving birth on a video below his pictures.

Keepers chose the name Pinduli as it means 'brings a change of direction'.  This was fitting as he was the first cub to be born on exhibit with the clan. While keepers suspected Pinduli was male they had to wait until his six-month health check to confirm it, via a DNA sample. Pinduli has just made his public debut! 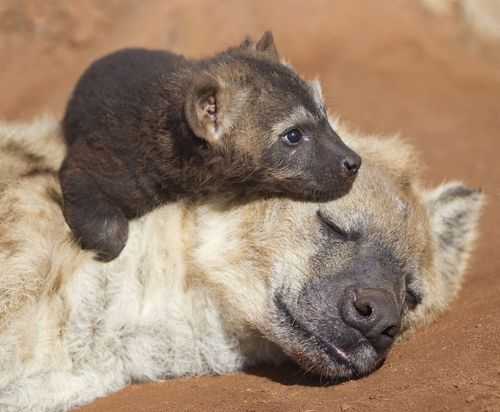 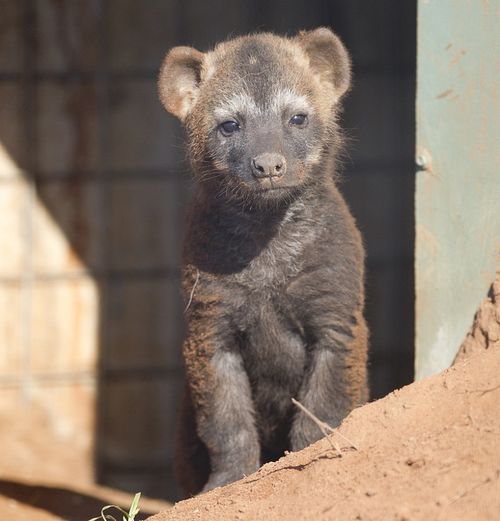 The second cub came into the world by the first ever Hyena caesarean performed in Australia on Kingali's daughter Forest. Hyena births are particularly complex, with first-time moms such as Forest having only a 20% chance of a successful outcome due to a quirk in their anatomy. Veterinarian Dr Jerome Kalvas said that with this in mind, when they saw no progress being made three hours into Forest's labor, it was clearly time to intervene.

“While the anesthetic and surgery went smoothly the cub was initially not breathing after delivery. We administered a respiratory stimulant and our veterinary nurses vigorously rubbed the cub until a small squeal and a strengthening heartbeat told us we were out of the woods,” Dr Kalvas said. “Then when the cub gave one of the vet nurses a little nip - Spotted Hyena cubs are born with a full set of teeth and open their eyes shortly after birth – we knew things were looking good!" 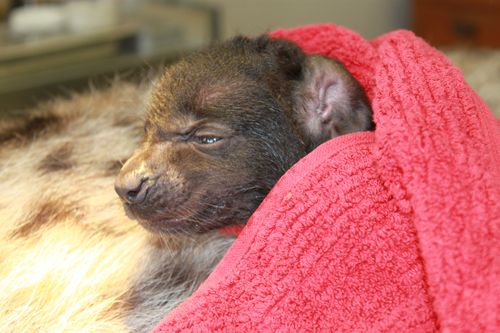 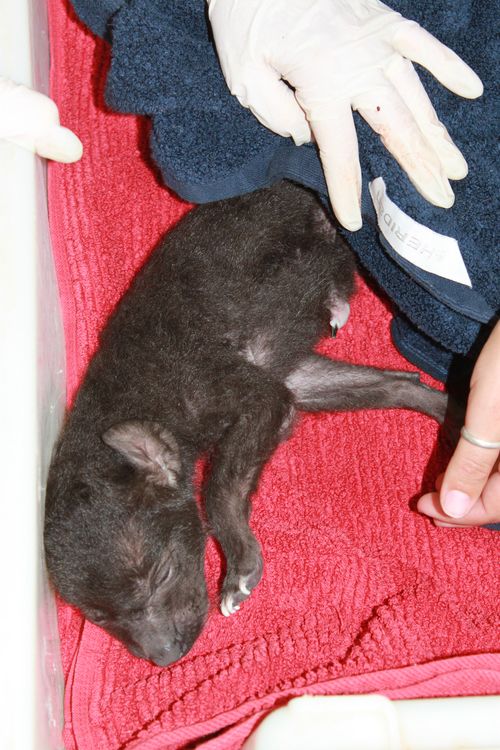 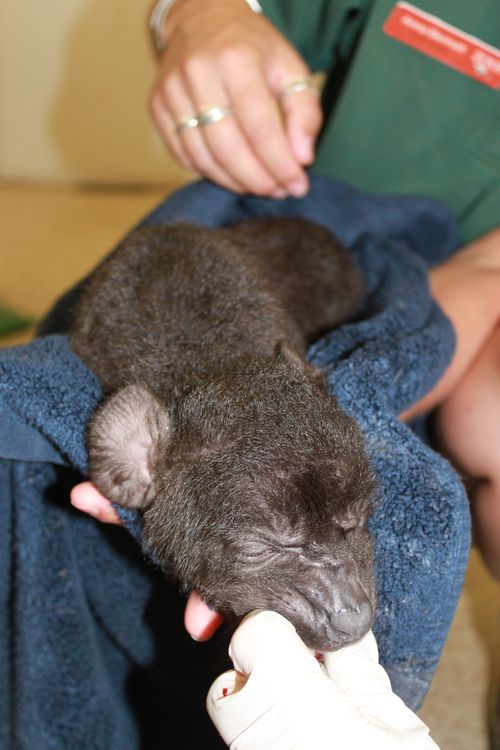 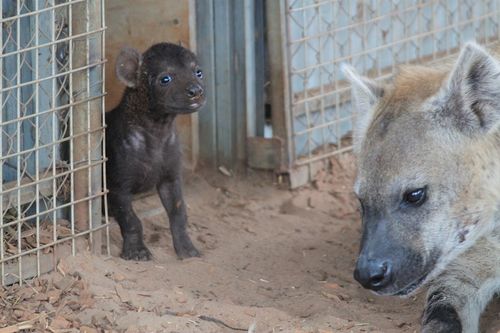 See more pictures of both cubs and learn the rest of the story below the fold:

On June 20th, Colchester Zoo's breeding Hyena pair produced the zoo's first ever zooborn Spotted Hyena! In 2011 Colchester Zoo became the first Zoo in the UK to house the species and so they are overjoyed that they've been able to breed successfully. The new arrival can be elusive, so you may have to wait to catch a glimpse. It spends much of its time in a den with mom now, but has occasionally been seen out on exhibit by keepers. 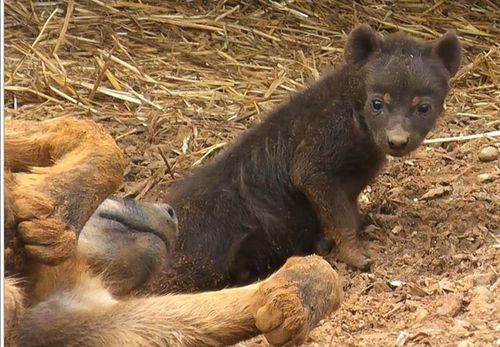 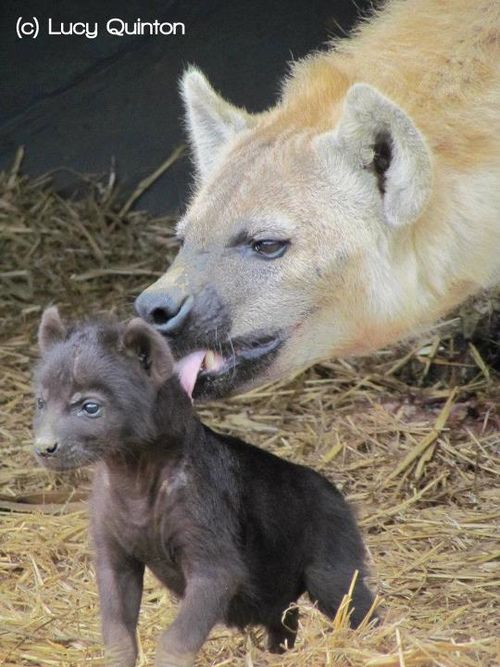 Did you know that Hyenas are more closely related to cats than they are to dogs? 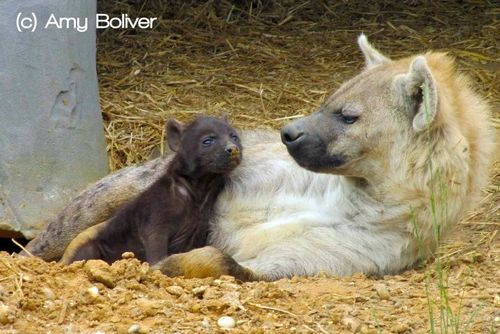 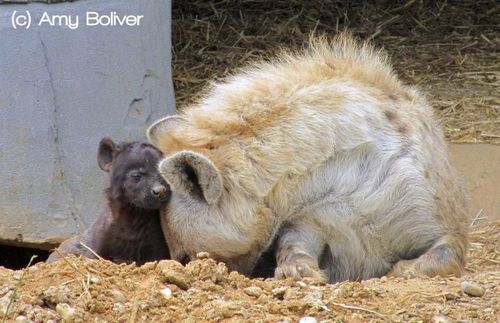 The Spotted Hyena is listed as least concern on the IUCN Red List due to the species continued widespread distribution within Africa, south of the Sahara. Populations of the species residing outside of protected areas are suffering mild threat of decline due to persecution and loss of habitat.

It is hoped that Abu and Kalabi continue their breeding success to help maintain the population of this species within the captive environment.

ZooBorns is thrilled to feature its first baby hyena, three month old Kai from the Denver Zoo. Contrary to popular myths about hyenas' bad attitudes, they are actually extremely intelligent and affectionate animals. While little hyenas might look like puppies, they are actually more closely related to cats. 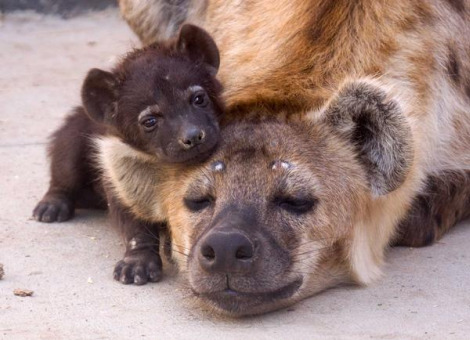 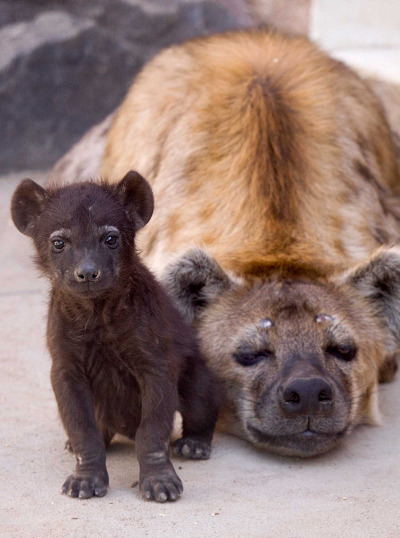 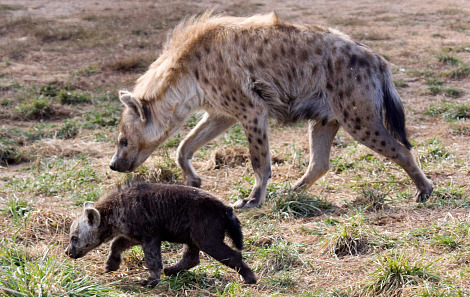 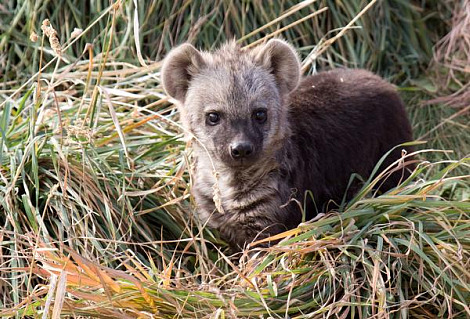 Thanks to reader Jearvon D. for bringing this to our attention.