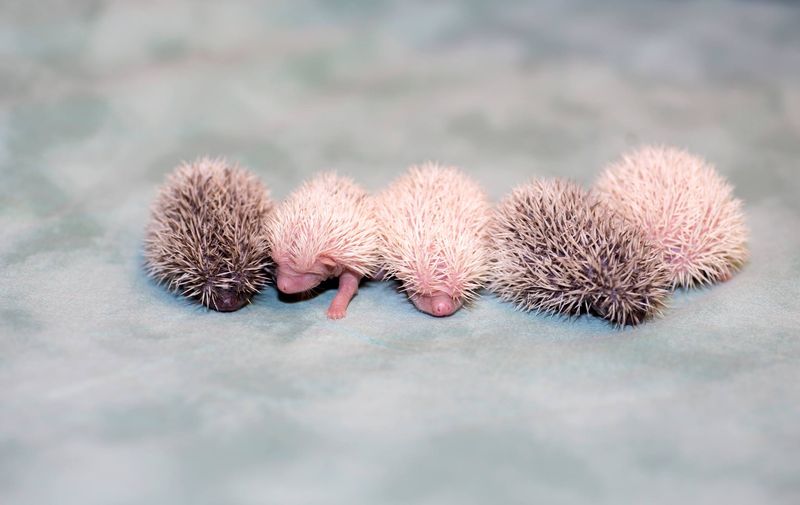 Denver Zoo has an adorable new prickle of baby Hedgehogs! 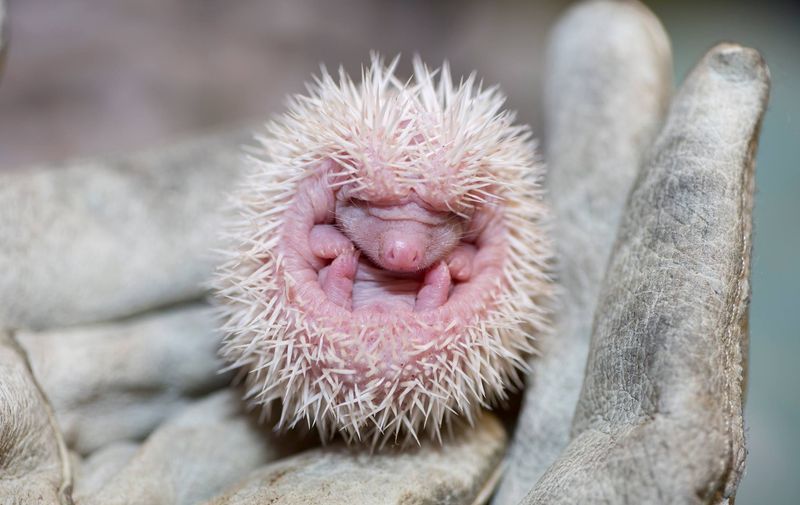 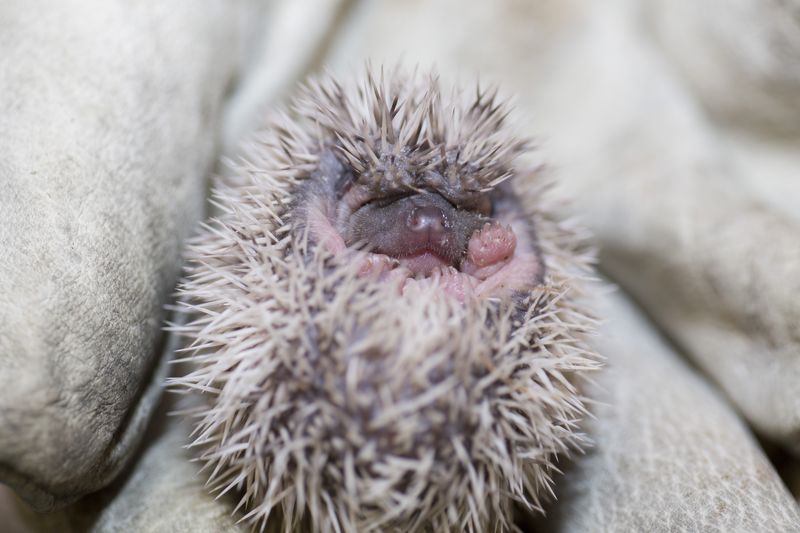 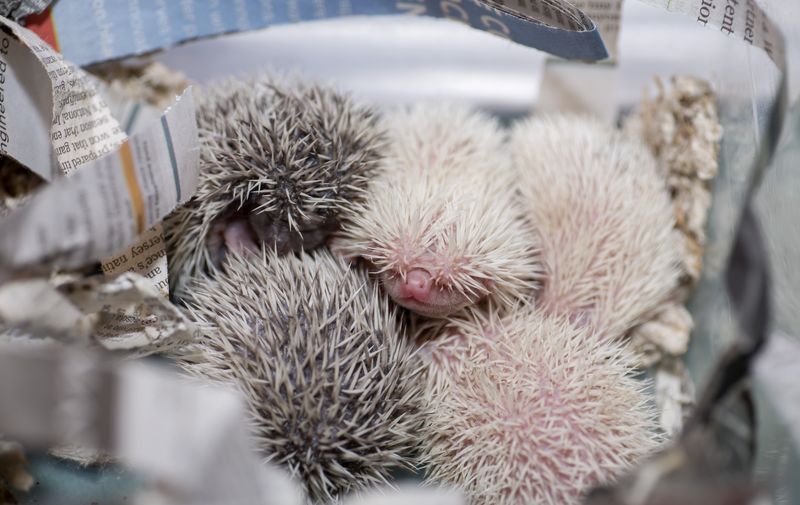 The babies were born in the zoo’s education department. They are currently with their mother, off exhibit, but once old enough, they will be used for outreach and other programs sponsored by Denver Zoo.

Hedgehogs are born blind with a protective membrane covering their quills, which dries and shrinks over the next several hours, after birth. The infants are born with quills beneath the skin, like pimples, and pass the skin after they have been cleaned. Eventually, the young will shed their baby spines (called “quilling”), and they will be replaced with adult spines. 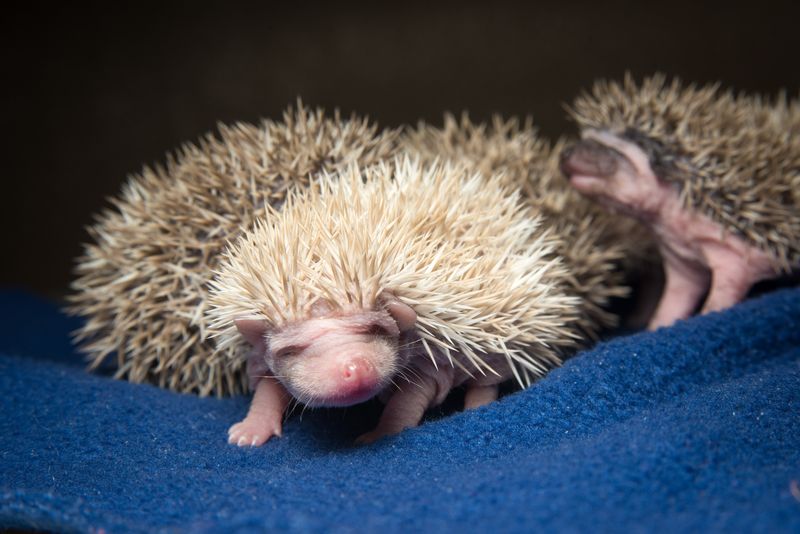 Hakuna Matata, an African Pygmy Hedgehog at the Oregon Zoo, gave birth to a litter of five on July 7!  The tiny, spiny hoglets weigh just a tenth of a pound each, and when curled up in a ball they are about the size of a doughnut hole. 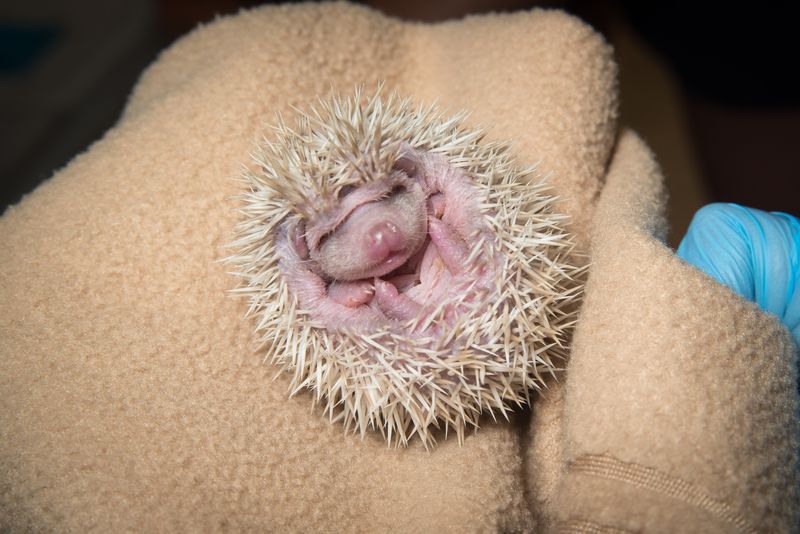 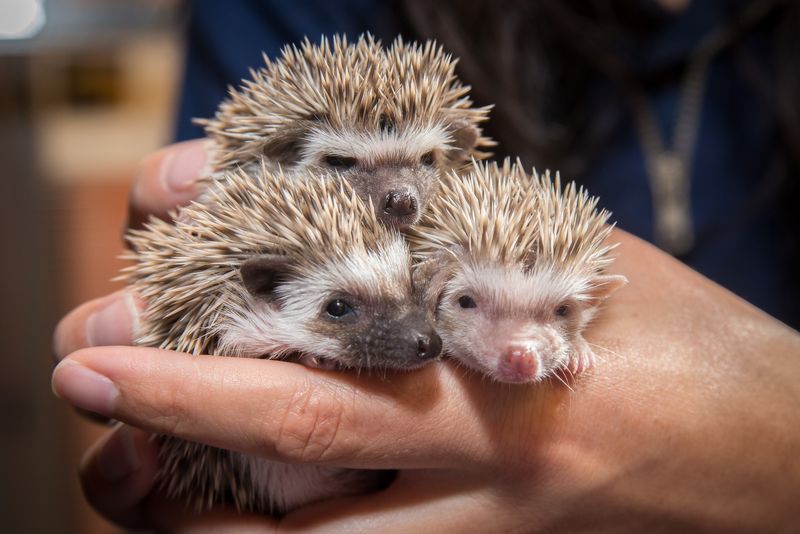 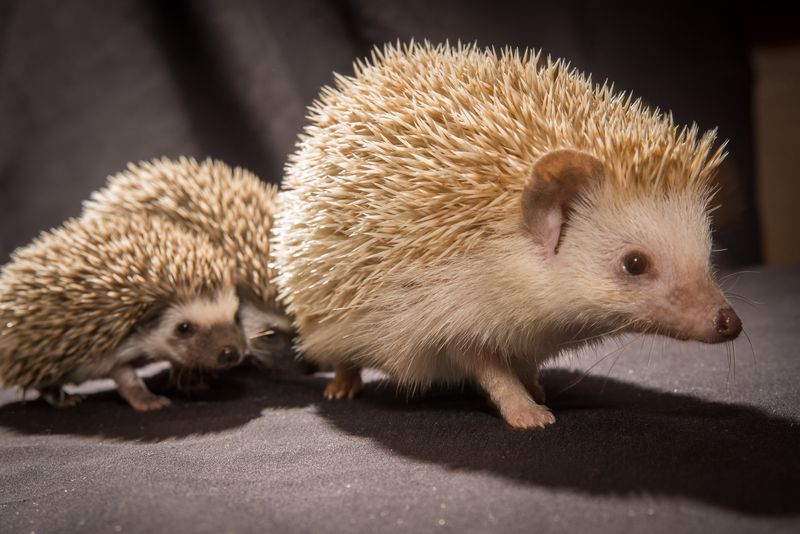 Keepers aren't completely sure of the little ones' sexes yet, but they believe there are three males and two females. Two of the hoglets resemble their mother, a black-eyed cinnicot with mostly white spines; the other three take after their father, Burundi, who is a dark gray. Their quills are actually modified hairs, which fall out and grow back throughout their lives.

"When we think of African predators, we often think of lions and cheetahs and painted dogs," said Tanya Paul, who supervises the Oregon Zoo's education program animals. "But African Pygmy Hedgehogs are a great example of a smaller predator that is also important. They are insectivores, so they help keep bug populations down. They can also tolerate a fair amount of toxins in their diet, and sometimes will even feast on scorpions."

Although hedgehogs are cute, Paul warns, people should think twice before considering one as a pet. "They're very difficult to care for because of their diet and the need for special veterinary care," she said. "Many vets don't specialize in treating exotic animals like a hedgehog."

For now the hoglets are not viewable by visitors, but staff are working on ways to let people see them once the babies are about six weeks old and have been weaned.

Baby Hedgehog Update: Now the Size of a Golf Ball! 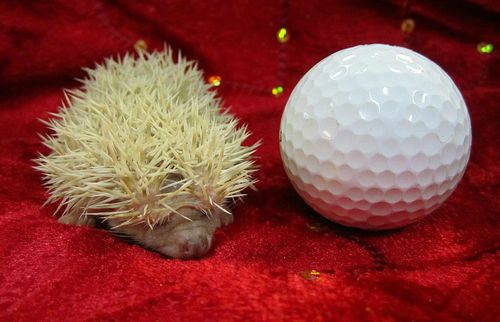 Since you first met Cameron Park Zoo's baby Hedgehogs on ZooBorns a few weeks ago, these prickly hoglets have been busy growing.  Once able to fit in a teaspoon, the Hedgehogs, named Polaris, Storm, Magneto & Juggernaut, are now the size of golf balls.  When fully grown, these spiny wonders will be about the size of a softball. 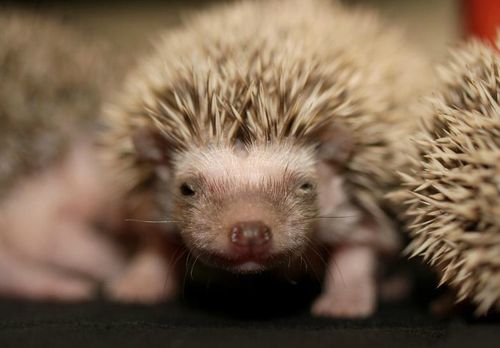 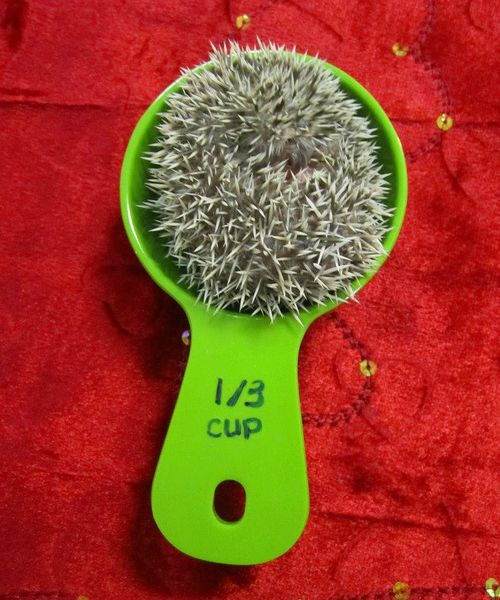 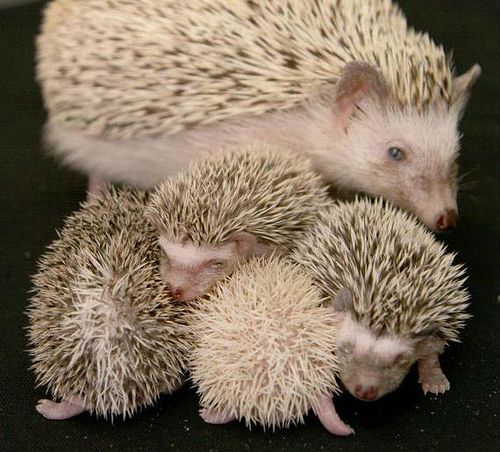 Hedgehogs are insect-eaters that use their spiny coat as a defense against predators.  When threatened, they curl into a ball with spines erect, making themselves a much less appealing snack.

These four Hedgehogs are destined for use in the zoo's education programs, where they will inspire kids of all ages to appreciate wildlife.

Baby Hedgehogs By The Spoonful! 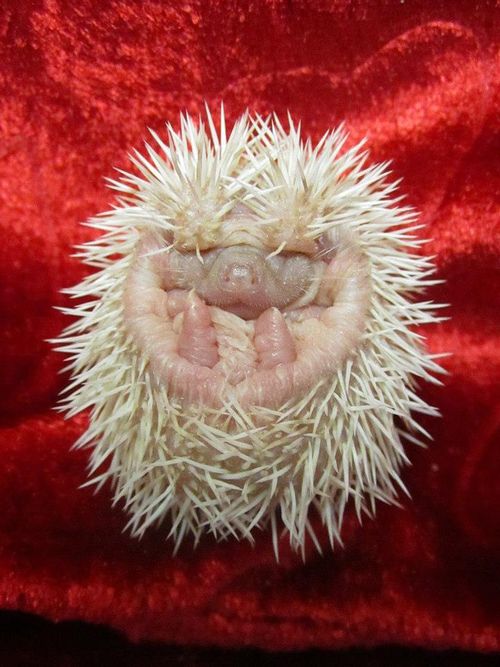 Meet Polaris, Storm, Magneto & Juggernaut. No, it's not a cast of characters from The X-Men, these are Cameron Park Zoo's newest education animals. Once the baby Hedgehogs are old enough they will be used for education and outreach programs. 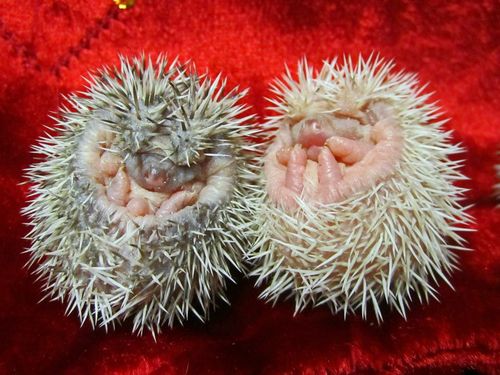 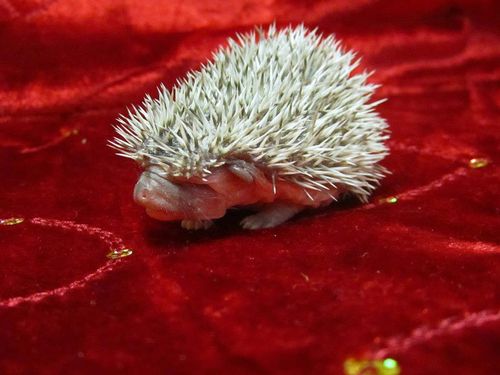 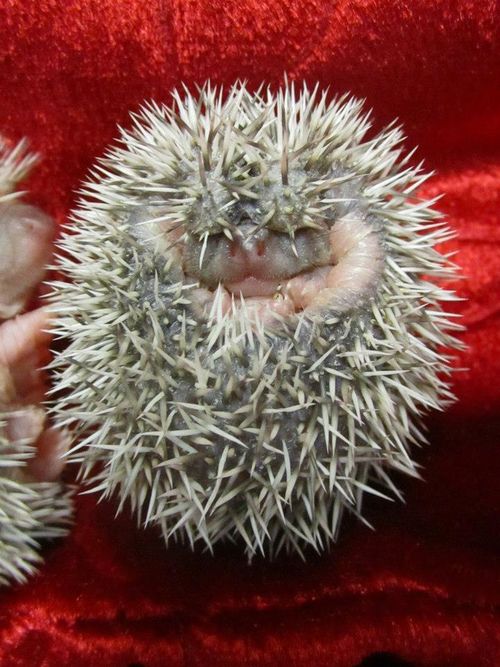 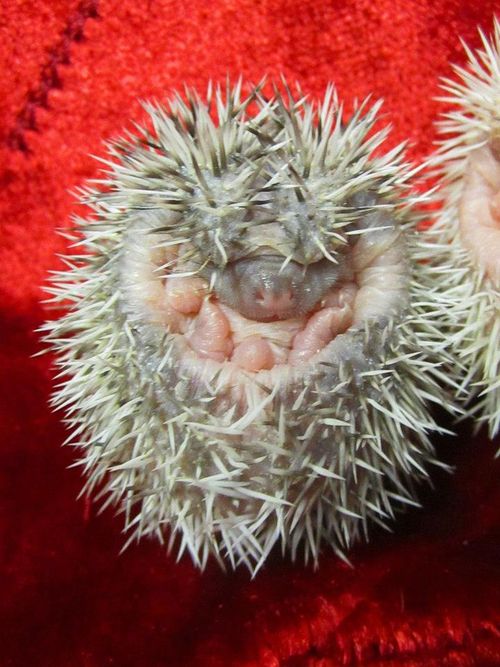 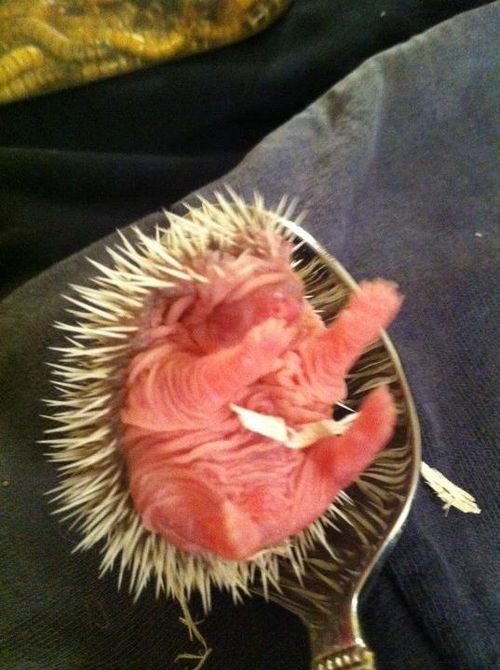 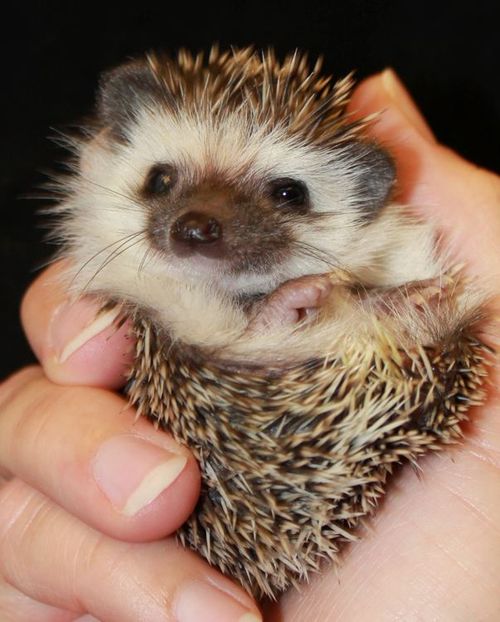 Happy Hollow Park and Zoo, in San Jose, California, is now home to 3 baby Hedgehogs. The trio, born in late March, is part of the zoo's education outreach program. When they get a bit older they will visit local school children. The three baby hedgehogs, also known as "hoglets", turned 4 weeks old on Thursday. 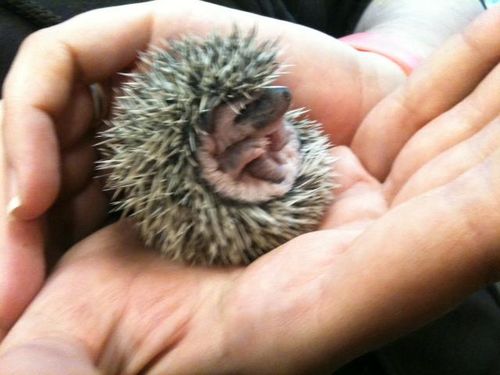 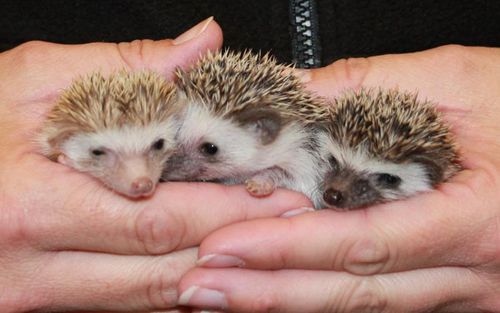 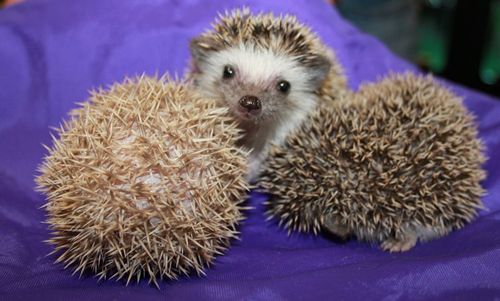 Look Who's Hogging All the Attention! 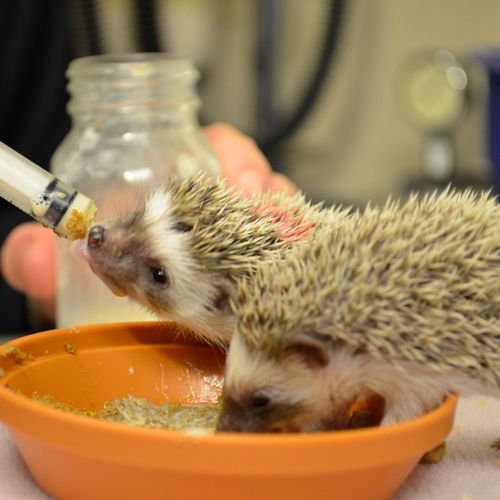 Four 4-week-old, Hedgehogs are currently hogging all of the attention at the Cincinnati Zoo.  The four incredibly cute Hedgehogs were born to mother, “Mali” and father, “Kenya,” and are currently off exhibit, behind the scenes in the Zoo’s Children’s Zoo Nursery.

Two male and two female, the siblings were born on February 4 and are being hand-raised by the Nursery keepers until they are old enough to be included in the Zoo’s Animal Outreach Program.  The babies are spending time getting acquainted with Zoo staff because their days will soon include interacting with school children, greeting visitors at the Zoo,  and traveling to schools throughout the Tri-state, as an official Zoo Outreach Animal. 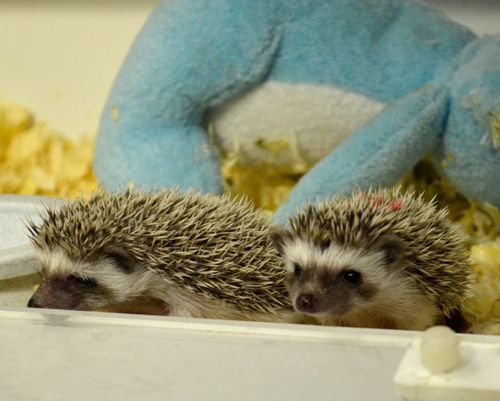 Nursery keepers are feeding the babies four times a day by grinding up dry Hedgehog food and mixing it with esbilac. The gruel is easy for the young Hedgehogs to digest.   The Cincinnati Zoo has been home to 13 Hedgehogs. Did you know baby Hedgehogs are born blind and hairless!? They don’t begin to sprout their sharp spines until 36 hours after birth.  The spines form a protective covering over their body. 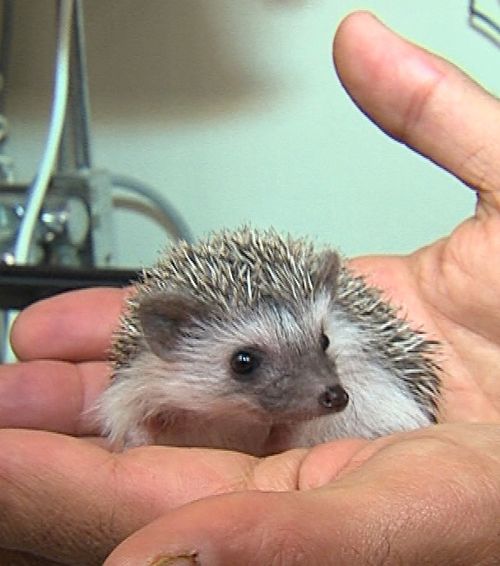 Shane, the baby African Pygmy Hedgehog, is about one quarter of his adult size in these recent photos. In the wild these hedgehogs are incectivores, dining on worms and grubs, but in Zoos, they typically are fed kibble, closer to what a pet dog or cat may eat. Shane will be part of Cincinnati Zoo's Outreach Program, which introduces school students and zoo visitors to varied kinds of exotic animals. 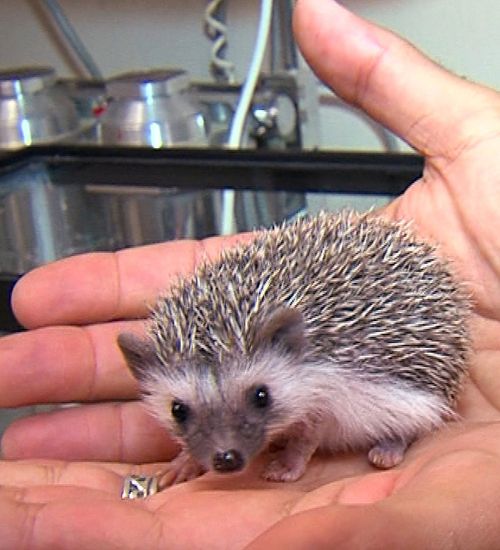 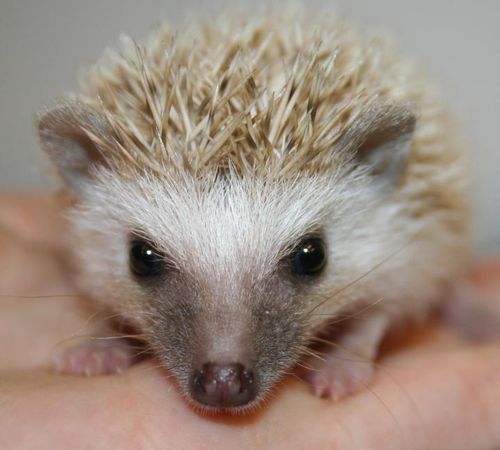 Belfast Zoological Gardens is celebrating the arrival of two bundles of joy, in the form of two African pygmy hedgehog babies! Mickey and Minnie were born to parents, Tom and Geri, just six weeks ago and these prickly little creatures only measure between six and eight inches in length when fully grown! Below you get a feel for the size of both Mom (right) and baby (left). 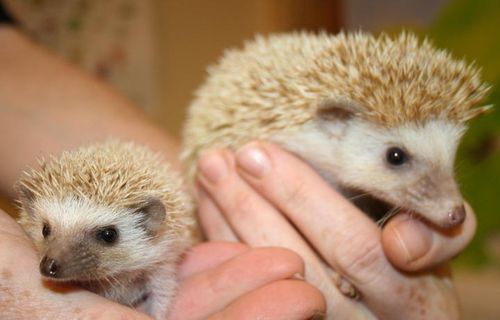 Education Officer Geraldine Murphy is delighted with the new arrivals, “Belfast Zoo’s education officers and our small team of animals come into contact with over 40,000 children every year and the African pygmy hedgehogs are a firm favourite with everyone!  Along with our team of animals including leopard geckos, tarantulas, royal pythons, bearded dragons and stick insects, we aim to raise awareness and understanding of the natural environment and to highlight the importance of conservation, particularly amongst young people.”