Aquarium of the Pacific

Seal Welcomes Third Pup at Aquarium of the Pacific 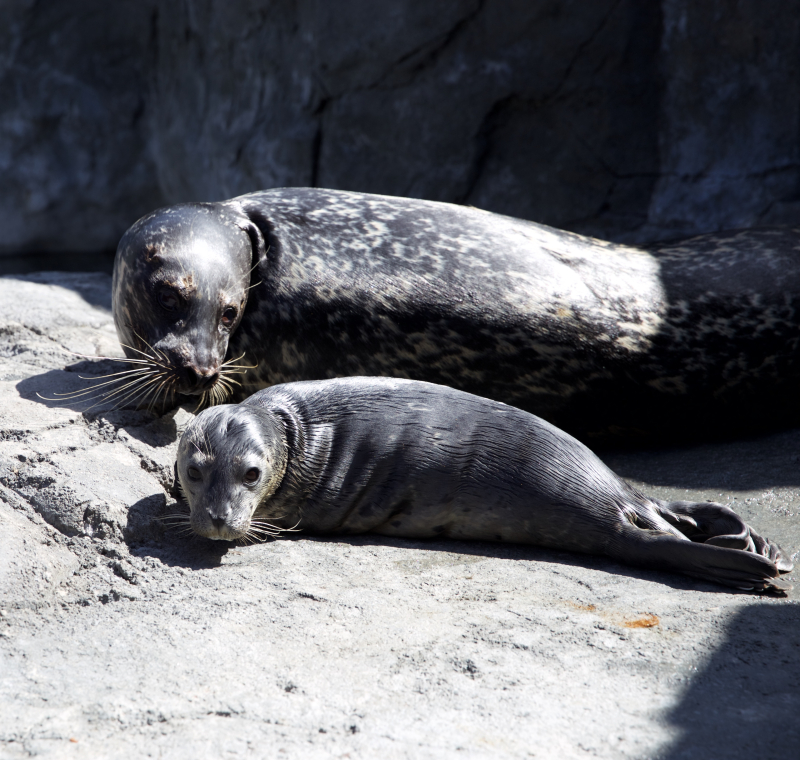 The Aquarium of the Pacific is pleased to announce that one of their Harbor Seals, named Shelby, gave birth to a pup on April 20. Shelby is one of the Aquarium’s original animals and was two-years-old when the nonprofit facility opened in 1998.

Most seals give birth to young starting at four to five-years-of-age. So at twenty-two years old, Shelby is considered a mature mom. This is her third pup. Shelby gave birth to her first pup, a female named Bixby, in April 2012 at age seventeen and her second, a male named Toby, in 2013. Bixby was moved to a zoo in the Midwest in 2015 with other female Harbor Seals, and Toby is slated to move to an aquarium in the southeast in May. Troy, the Aquarium of the Pacific’s only male Harbor Seal, is the father of all three pups and has lived at the Aquarium since 2007.

“Shelby has had a normal, healthy pregnancy, and with her success at giving birth to two pups here at the Aquarium in recent years, we were cautiously optimistic about the arrival of her third pup. It is particularly special to the Aquarium that one of our charter animals has given birth to the next generation, in the year of our twentieth anniversary,” said Dudley Wigdahl, Aquarium Curator of Mammals and Birds.

Shelby and her female pup are currently in the holding area next to the Seal and Sea Lion Habitat at the Aquarium. The shades will at times be open and closed periodically to allow for privacy for the mother and pup to bond. 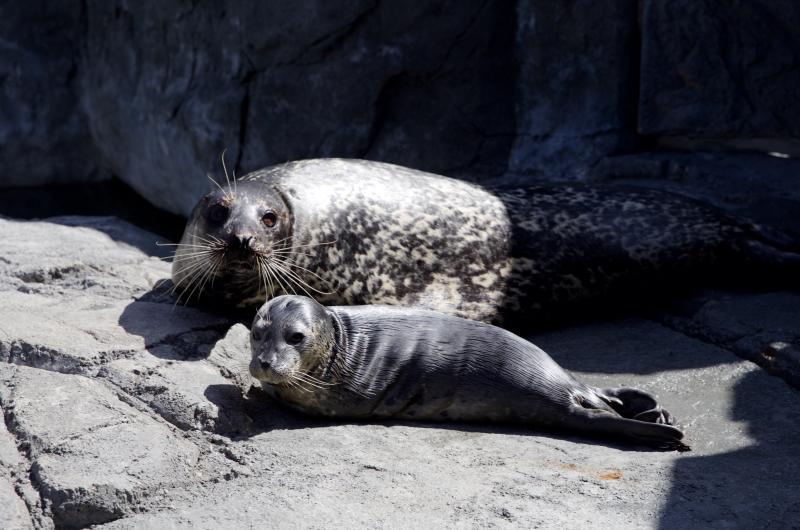 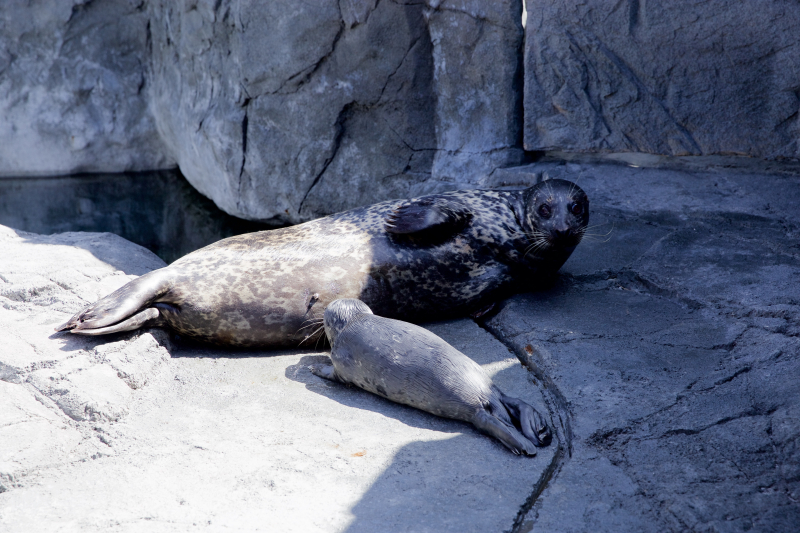 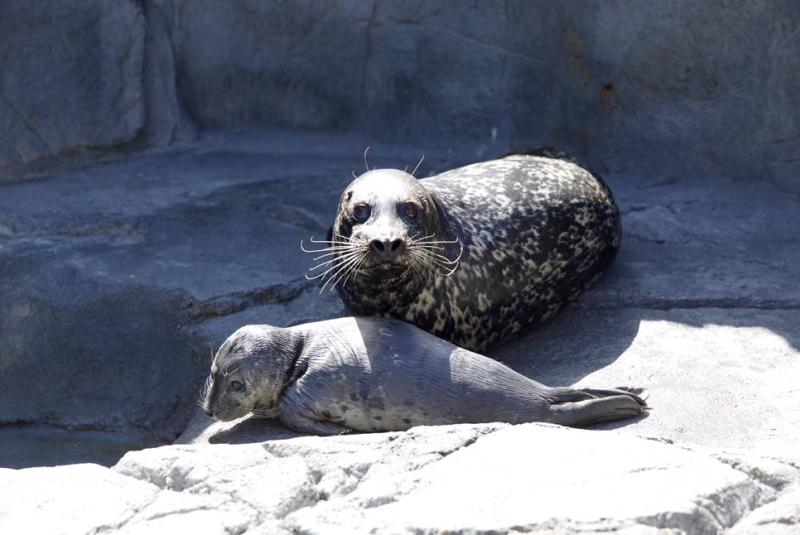 Photo Credits: Aquarium of the Pacific

New mom, Shelby, is a Pacific Harbor Seal. Harbor Seals (Phoca vitulina) can be found in the eastern Pacific Ocean, from the southern coast of Alaska to the northern portion of Baja, Mexico.

Their color and markings are unique to each seal, like a human’s fingerprints. Some have light-colored fur of almost white to silver or gray with darker circular or ring marks. Others have darker fur with light-colored markings. They range in size from 4 to 6.6 feet long and weigh between 110 to 375 pounds (males tend to be larger than females).

They may spend up to 85 percent of the day diving for prey, primarily schooling and bottom-dwelling fishes such as herring, surfperch, rockfish, salmon, and hake. They are also partial to some invertebrates, including crustaceans, and they get the water they need from their food. They can live about twenty-five to thirty years in the wild and longer under human care. Harbor Seals are protected by the Marine Mammal Protection Act. While the species is not currently listed as endangered or threatened, Harbor Seals are sensitive to human encroachment.

A Bouncing Baby Boy for Aquarium of the Pacific

Shelby, a popular Harbor Seal at the Aquarium of the Pacific in Long Beach, California, gave birth to a male pup on May 1.  The 32 pound (14.8 kg) pup is the second for Shelby and her mate, Troy. 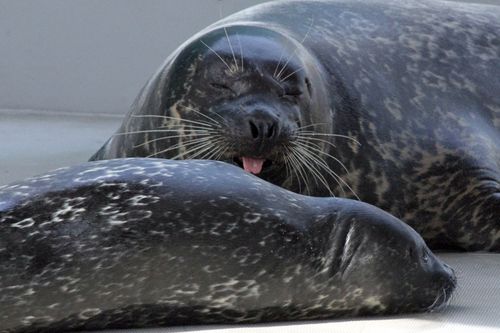 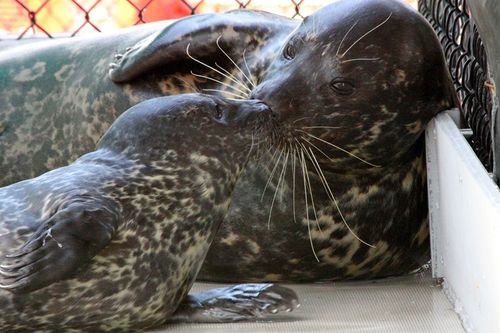 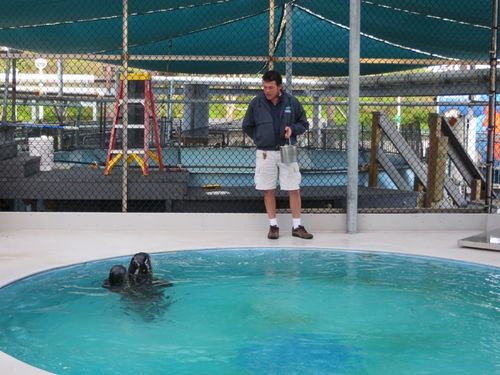 The new pup is much larger and hungrier than Shelby’s first pup.  According to keepers, Shelby has to end nursing sessions herself, rather than waiting for the pup to finish.  Keepers have been giving Shelby extra fish so that she can produce enough nutritious milk for her growing pup.

Keepers also report that this pup is unusually vocal.  He calls loudly to get his mom’s attention, then enjoys floating on his back next to Shelby. 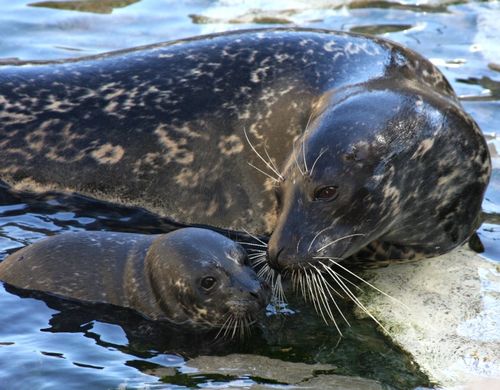 Most Harbor Seals give birth to their first pup at age four or five, but mother Shelby just had her first baby at age 16! The female pup was born April 26 in the Aquarium of the Pacific's Seal and Sea Lion Habitat. The little girl weighed around 20 pounds at birth. The pup appears to be healthy and behaving normally. As you can see in the first video below Harbor Seal pups can swim immediately after birth!

Staff members are currently allowing the mother and pup to bond and will continue to monitor the animals. Aquarium staff members closely monitor the health and well-being of all of the Aquarium’s animals on a continuous basis. Shelby’s pregnancy was discovered during a recent exam by Aquarium Veterinarian Dr. Lance Adams. Husbandry staff members determined that keeping Shelby on exhibit in her normal surroundings would be the best option for keeping her comfortable during the pregnancy. 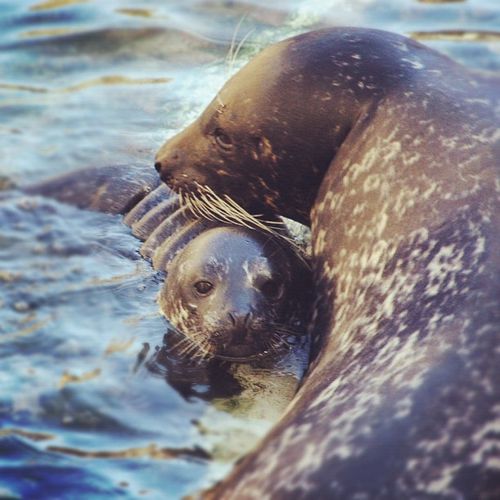 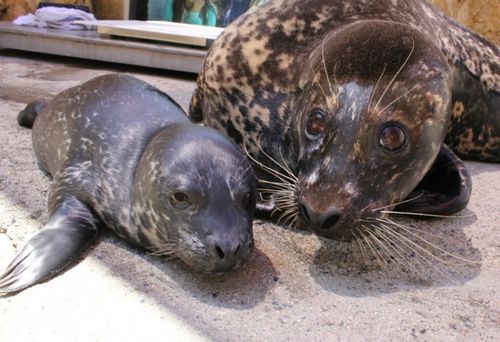 “Since Shelby is a first-time mother, she does not have experience rearing young. The Aquarium’s marine mammal experts will be watching Shelby’s parenting skills to ensure the pup is receiving the proper nutrition while Shelby and her pup begin to bond. The staff is cautiously optimistic, as seal pups are at the highest risk during the first few weeks of life,” said Dudley Wigdahl, the Aquarium’s curator of marine mammals.

New Arctic Fox Pups Arrive at Aquarium of the Pacific 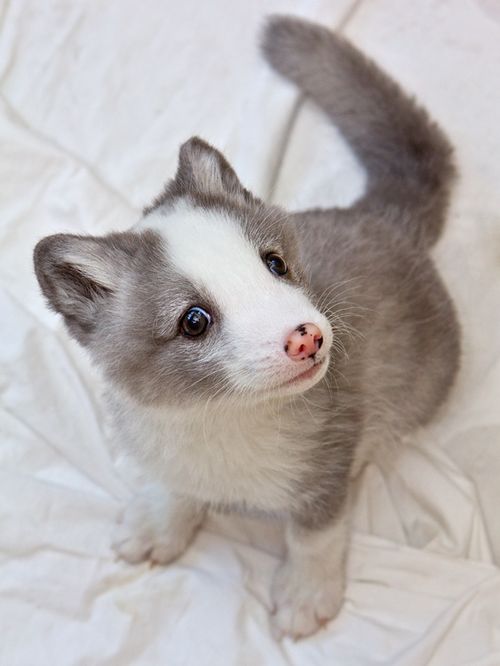 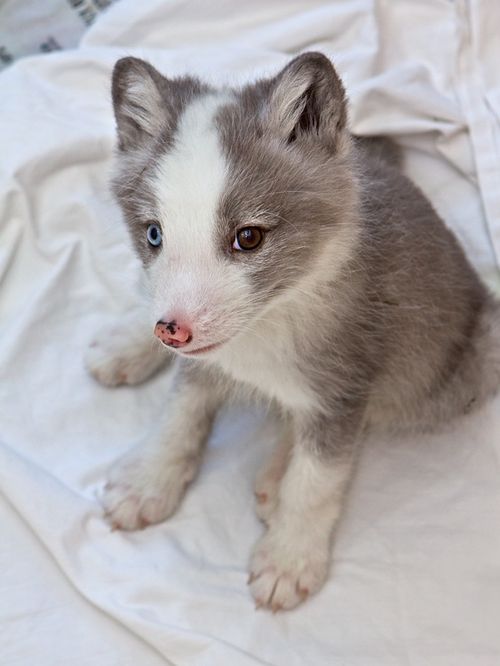 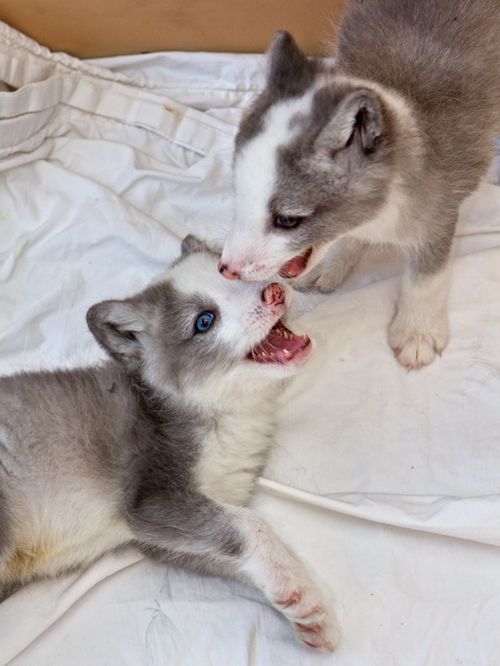 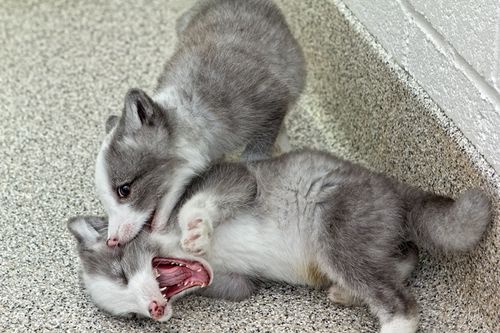 Photo credits: Aquarium of the Pacific

Arctic fox babies are called either pups or kits. A litter usually has about seven kits but may contain up to fifteen. The Arctic fox is an incredibly resilient animal that can live in temperatures as low as -59° F and as warm as temperatures we experience in Southern California. They are found in the Arctic and alpine tundra regions, from coastal Alaska and Greenland to Scandinavia and Russia.

in Aquarium of the Pacific, Fox | Permalink | Comments (32)

Checking in with Ollie the Orphan Sea Otter 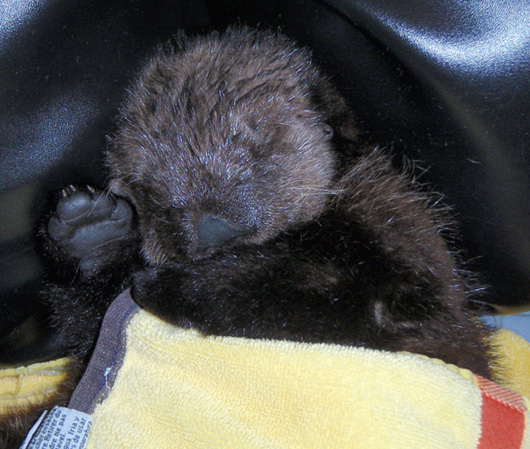 Photo credits: Aquarium of the Pacific

Aquarium visitors have the chance to take a sneak peek at the newest furry baby animal at the Aquarium of the Pacific through daily behind-the-scenes tours as of Friday, Dec. 10. The three-month old orphaned Sea Otter was stranded and rescued off of Santa Cruz when she was just weeks old. 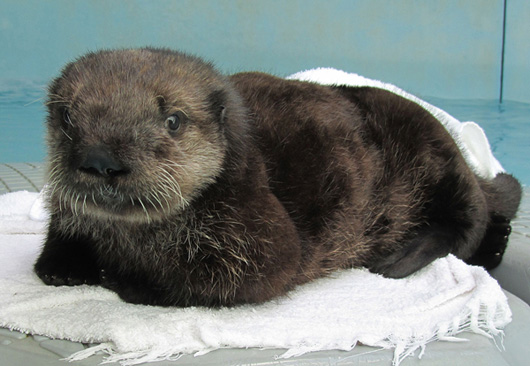 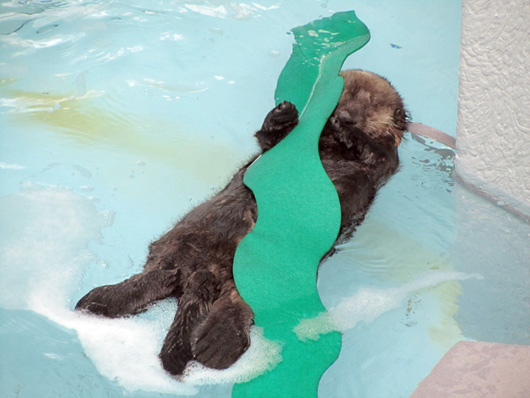 Continue reading "Checking in with Ollie the Orphan Sea Otter" »

in Aquarium of the Pacific, Otter, Sea Otter | Permalink | Comments (8)

Found alone on the Central Coast of California, a whimpering little otter pup was rescued and taken to the Aquarium of the Pacific. Too young to fend for herself but too old to be placed in the surrogate otter mom program that would have provided her with the necessary life skills to be returned to the wild, "Furball" (eventually renamed Maggie) was adopted by the Aquarium. More specifically, she was adopted by marine mammal trainer "Hugh" who has spent the last few months as her surrogate dad, including many nights sleeping next to the young otter. Watch the adorable video below and learn more about Hugh's adventures with Furball on the Aquarium's blog. 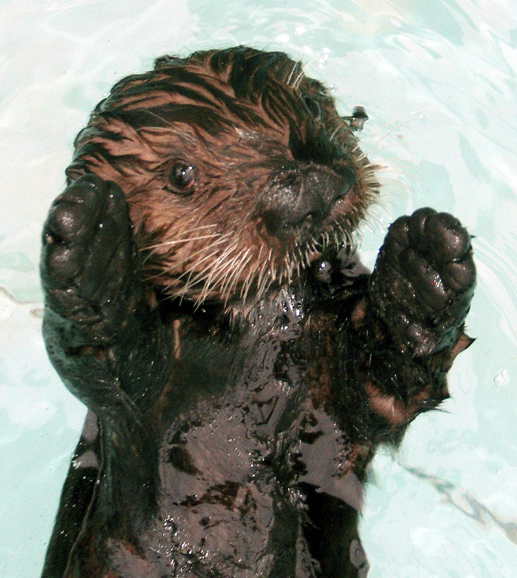 in Aquarium of the Pacific, Otter, Sea Otter | Permalink | Comments (5)