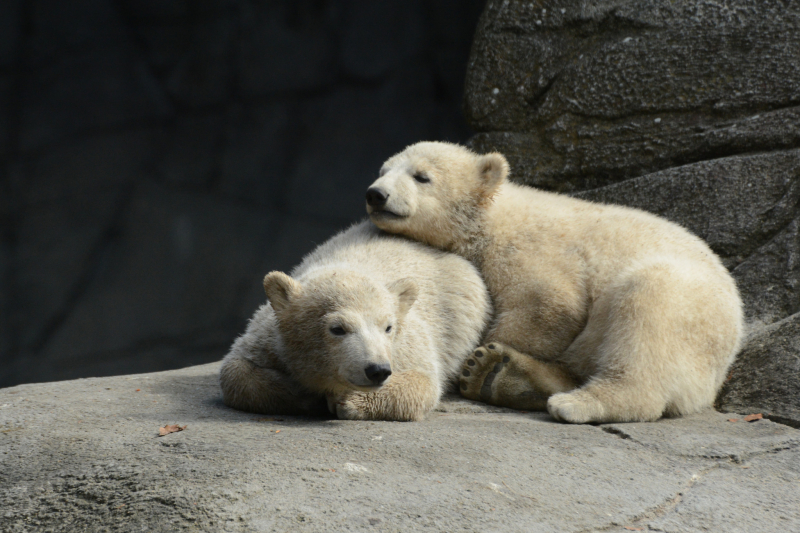 Visitors to Aalborg Zoo, in Denmark, have been enjoying the antics of two adorable Polar Bear sisters.

The female cubs were born November 26 to mom, Malik, and the trio emerged from their birthing den in late February. 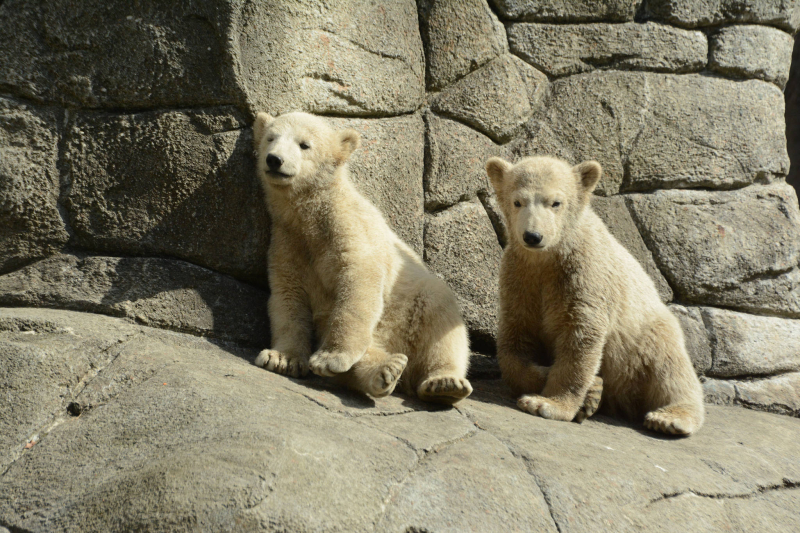 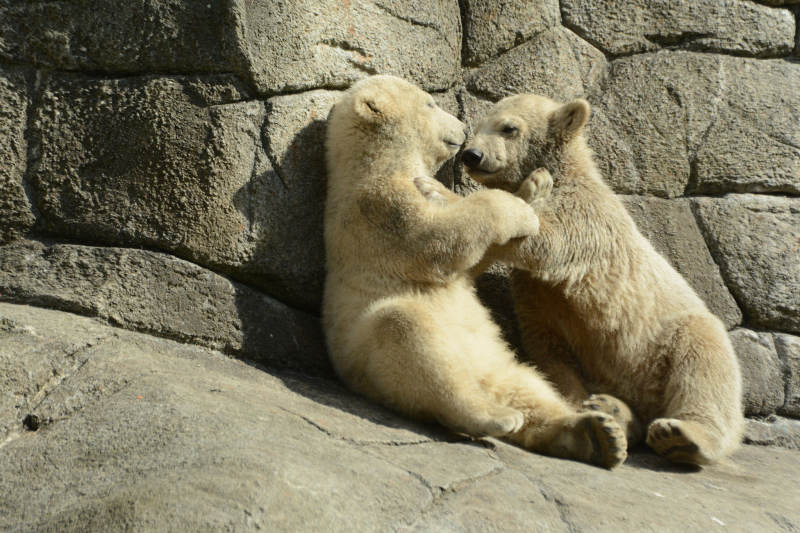 The Polar Bear (Ursus maritimus) is a carnivorous bear that is native to the circumpolar north including the United States (Alaska), Canada, Russia, Norway and Denmark (Greenland).

Polar Bears generally have their first set of cubs between the ages of four and eight years. Due to delayed implantation, the gestation period can range from about 195 to 265 days. Pregnant Polar Bears den in the fall and give birth, generally to two cubs, in the winter. The cubs grow quickly on their mother’s fat-rich milk before emerging from the den in the spring.

Polar Bears are at the top of the Arctic food chain and primarily eat seals. Their populations are declining due to the disappearance of sea ice, and experts estimate that only 20,000-25,000 Polar Bears are left in the wild. Some scientists believe if the warming trend continues two-thirds of the population could disappear by the year 2050.

The Polar Bear is currently classified as “Vulnerable” on the IUCN Red List of Threatened Species. At least three of the nineteen subpopulations are currently in decline.

More great pics below the fold!

After a Successful Surgery, Sumatran Tiger Cub is Reunited with Mom 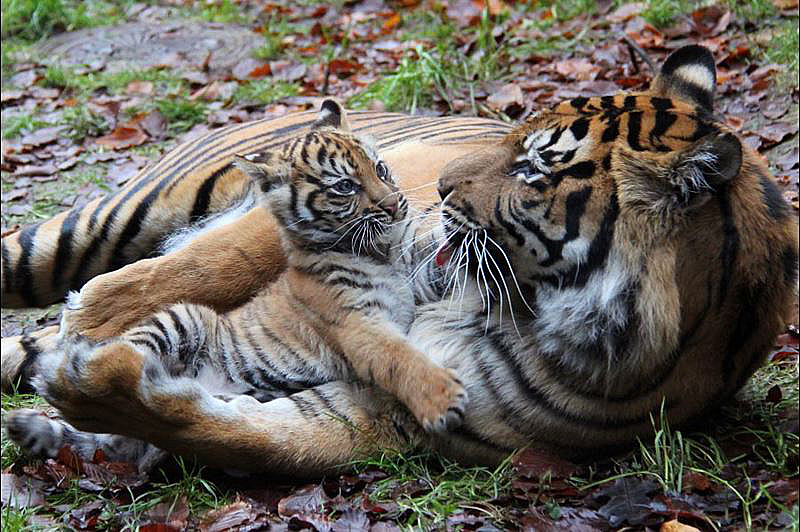 At Aalborg Zoo in Denmark, a Sumatran Tiger cub was born with an umbilical hernia. (This is a condition where the abdominal lining or part of an abdominal organ protrudes from the belly button area.) It was clear very soon after birth that the cub would need an operation. Fotunately, this little guy was in very good hands.

Veterinarians performed the surgery in October, using a gas to render the cub unconscious. This allowed the cub to wake up immediately after the surgery so that the little Tiger could be reunited with mom as soon as possible. The cub has recovered well and is being raised by mom, growing up strong and healthy.

Wild Sumatran Tigers are found only on the Indonesian island of Sumatra. A Critically Endangered species, there are an estimated 400 to 600 left in the wild, with habitat loss and poaching posing the greatest threats. The smallest of six tiger subspecies that exist today, a fully grown Sumatran Tiger can weigh up to about 310 pounds (140 kg). 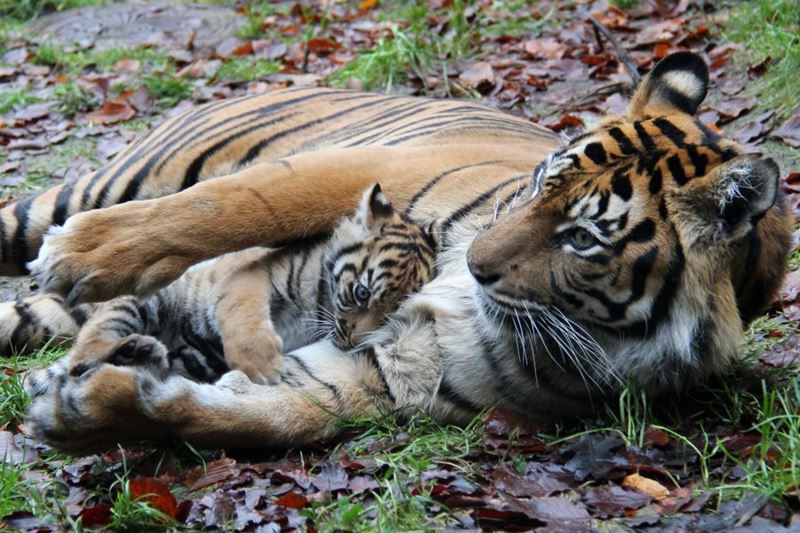 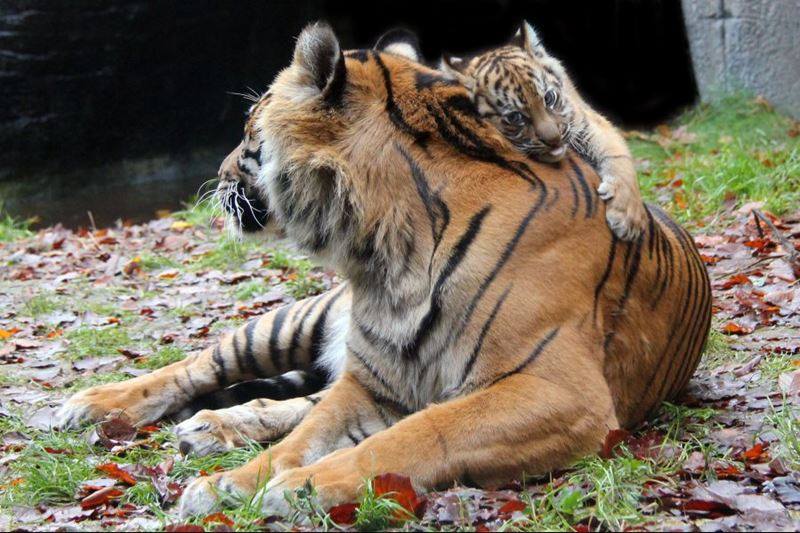 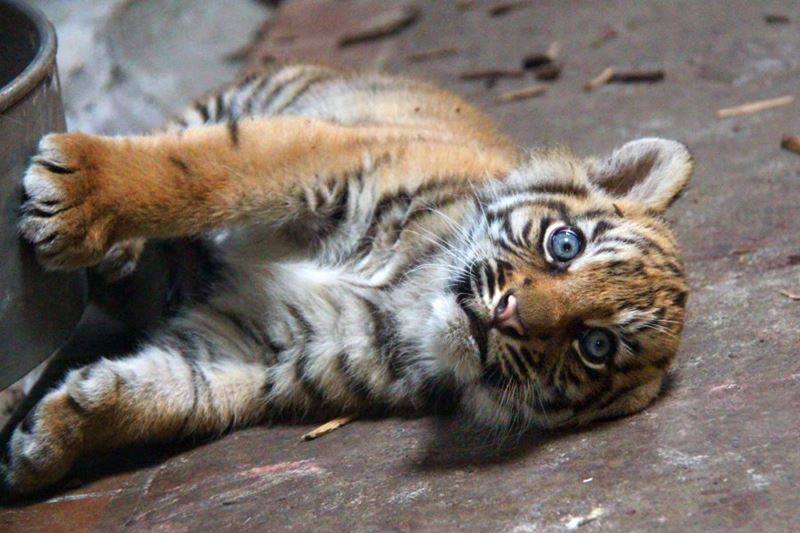 See more photos after the fold!

Continue reading "After a Successful Surgery, Sumatran Tiger Cub is Reunited with Mom" » 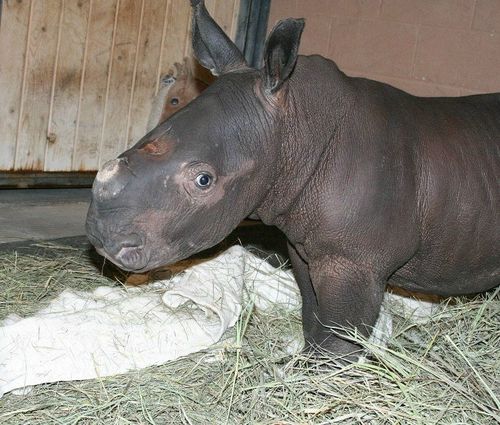 A male Southern White Rhinoceros calf born on an unusually cold night at Florida's White Oak Conservation Center is now being hand-reared by the staff at New Mexico's ABQ BioPark, thanks to a unique arrangement between the two facilities.

After the baby was born in Florida on October 30, the White Oak staff observed that the 169-pound calf was slow to start nursing and did not establish a strong bond with his mother, so they decided to hand-rear the calf.

Because the calf’s father is Bully, a male Rhino sent from the BioPark on a special loan to White Oak, the calf belongs to the BioPark.  White Oak Conservation Center partners with zoos to conserve threatened species through breeding and other programs. 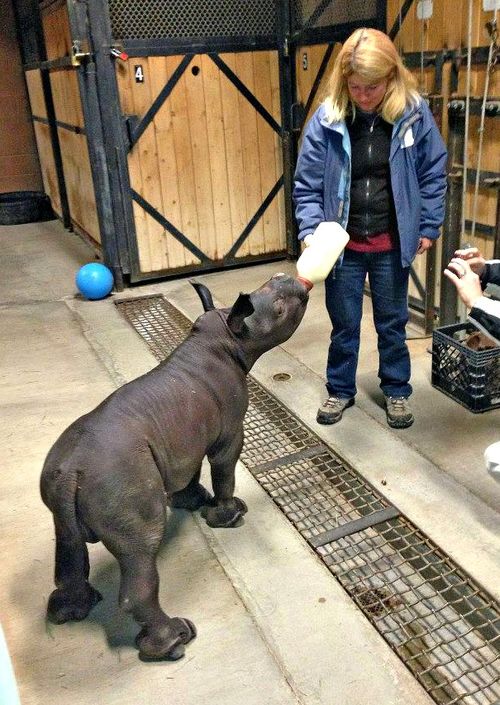 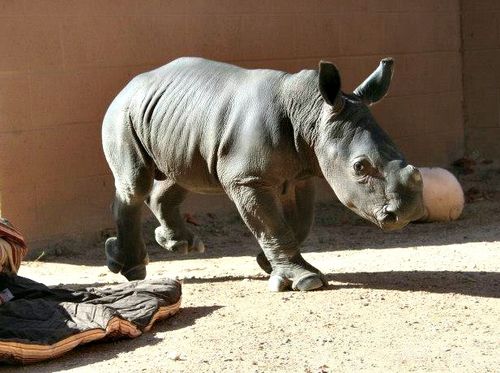 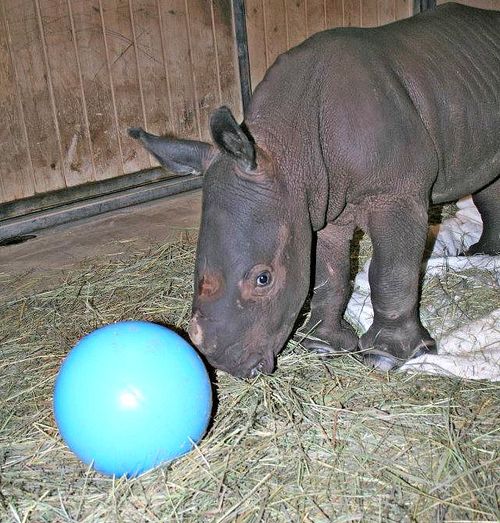 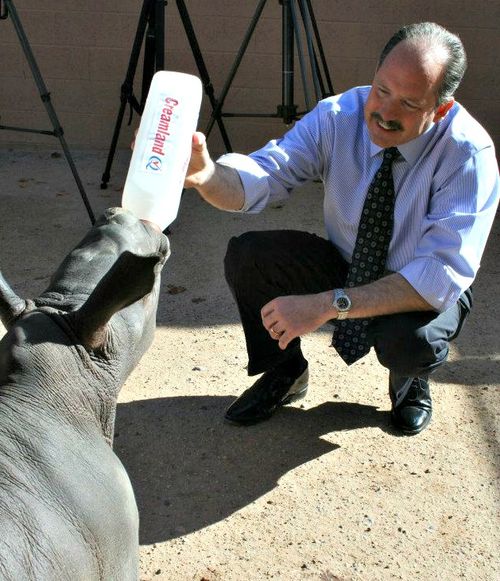 The calf is bottle-fed a mixture of skim and 1% cow's milk with extra dextrose and vitamins added. This formula mimics the very sweet, low-fat milk of Rhino mothers. The baby Rhino is hand-fed around the clock, every 3-4 hours, at the BioPark.

"We are pleased that Albuquerque can offer a good home to this Rhino calf," said Mayor Richard J. Berry, shown feeding the calf in the photo above. "We know that our Zoo will give him top-notch care, and what a great treat for families to watch this little guy grow up."

"The calf is very playful and rambunctious," said Zoo Manager Lynn Tupa, who traveled with the two-week-old calf from Florida. "He did great during the trip, and we enjoyed getting to know him. He loves his fuzzy blankets, which he rolls around on and drags with him."

The calf's first few months at the BioPark will be spent behind-the-scenes as he gets accustomed to staff and the three adult Rhinos Bertha, Lulu and Bernie.

The Southern White Rhinonoceros (Ceratotherium simum simum), native to southern Africa, is the world’s third largest land animal, but nearly became extinct in the early 1900s, when hunting reduced the White Rhino population to 100 animals. Today, there are more than 20,000 individuals. Conservation efforts such as captive breeding have been an integral part of this success story. Zoos and other facilities have been able to provide social, open spaces for Rhino groups to breed and thrive. Unfortunately, poaching for Rhino horns continues to threaten the future of the species.

The Aalborg Zoo's Polar Bear cub, Augo, is proving to be particularly playful and inventive, transforming a big blue bucket into his new favorite toy. Don't miss the video below. 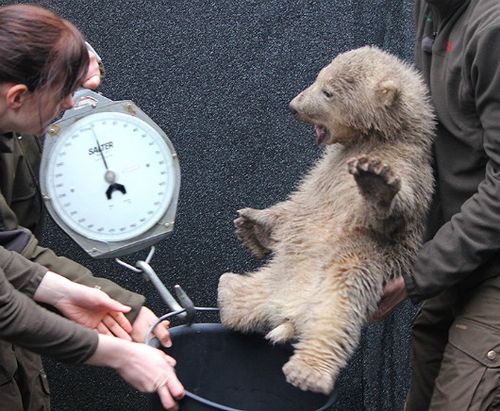 Just last week, Aalborg Zoo keepers finally succeeded in separating a very muddy cub from mom Malik in the birth den for an overdue veterinary examination. Not surprisingly, mom and cub were not happy about this as evidenced by the cubs feisty resistance in these photos. However, the examination went swiftly taking only 4 minutes, during which time the cub was weighed (already 35lbs / 15kg!), the gender was determined (it's a boy!), and a DNA sample was obtained. The Aalborg Zoo explained "When the cub returned to mom, it didn't take long until it seemed as happy and adventorous as before the weird incident. Afterwards the zookeepers handfed the cub with a special treat: dried figs, and this offer wasn't refused." 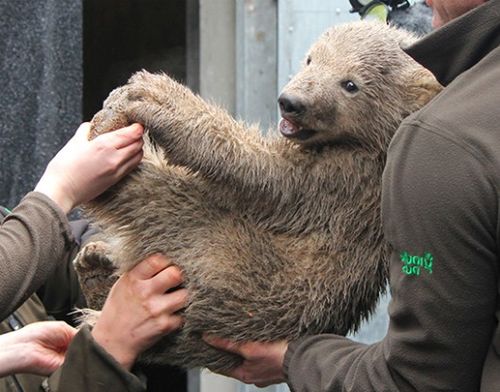 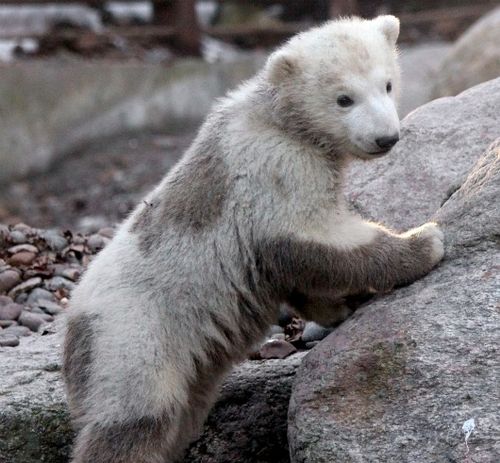 More pictures and video of the cub playing outside below the fold, or see previous ZooBorns coverage of the little guy from March 1st and February. 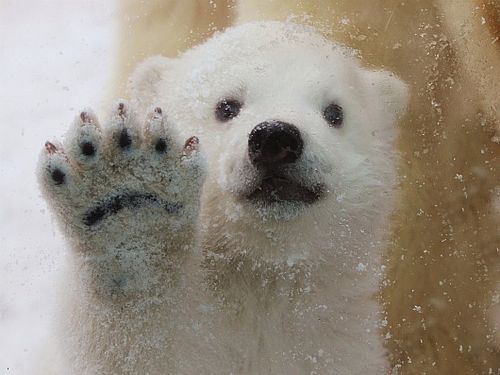 Just in from the ZooBorns Breaking News Desk: little Polar Bear cub loves snow! So maybe this is not a revelation, but it's certainly fun to watch. The Aalborg Zoo's little Polar Bear cub is having a grand old time enjoying the Danish snow. At 3 months old, the cub spends a lot of time playing with mom Malik and biting everything it finds interesting, particularly mom's paws. 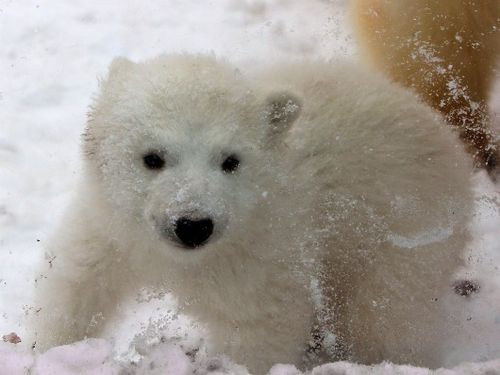 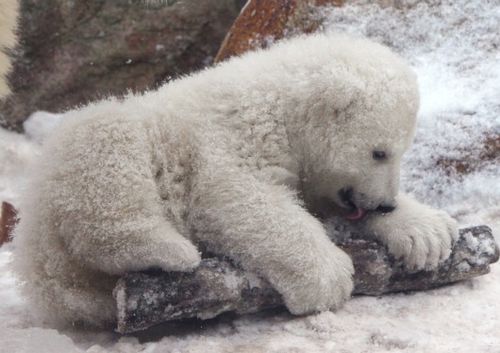 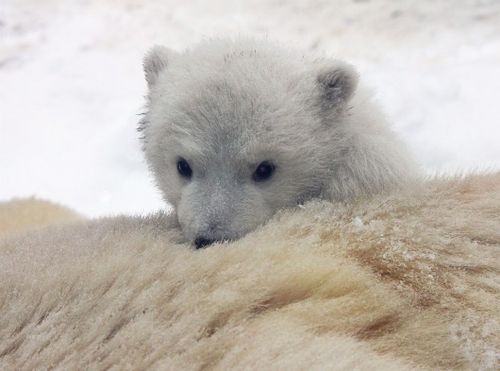 Many more outstanding photos below the fold. 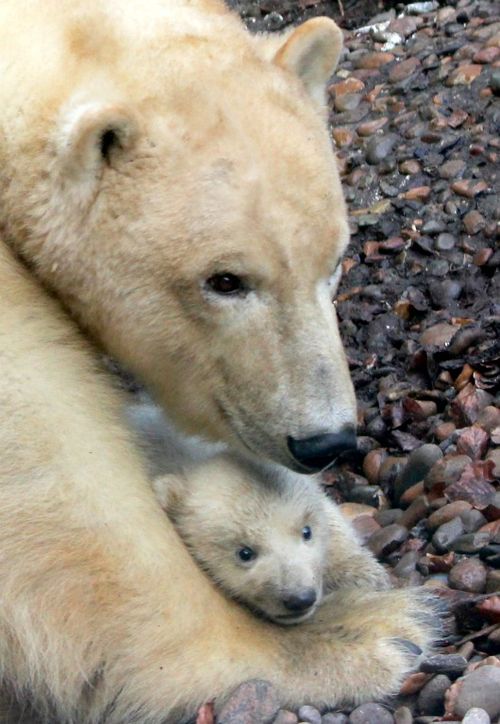 For the first time last week, mama Polar Bear "Malik" coaxed her three month old cub out of their cozy den for a little outdoor adventure at Denmark's Aalborg Zoo. Since Zoo veterinarians have not yet been able to safely examine the cub, the sex is still undetermined. In the wild Polar Bears most often hunt along the edges of sea ice. Unfortunately global warming threatens the bears' habitat and the International Union for the Conservation of Nature (IUCN) has classified the Polar Bear as vulnerable to extinction. 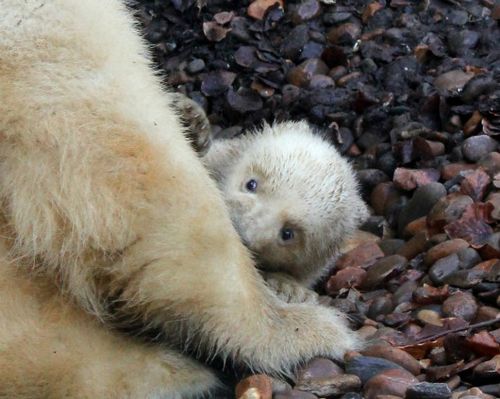 More photos below the fold

One of our favorite amateur zoo photographers, Tambako the Jaguar, brings us our first pictures from Denmark's Aalborg Zoo and they are outstanding. A three month old Amur Tiger cub, also known as a Siberian Tiger, takes some of her first adventurous steps exploring her new enclosure. The largest living cat, this majestic species once roamed from Turkey to China but is now confined to an isolated area in the Amur region of far eastern Siberia. On a side note, it looks like Aalborg also has a young Polar Bear cub. We hope to share pictures soon. 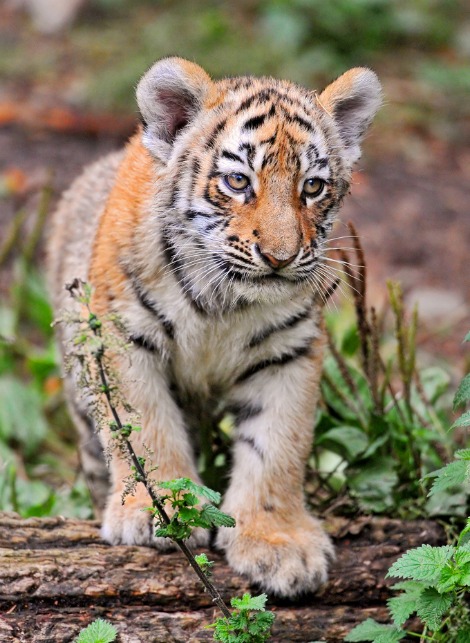 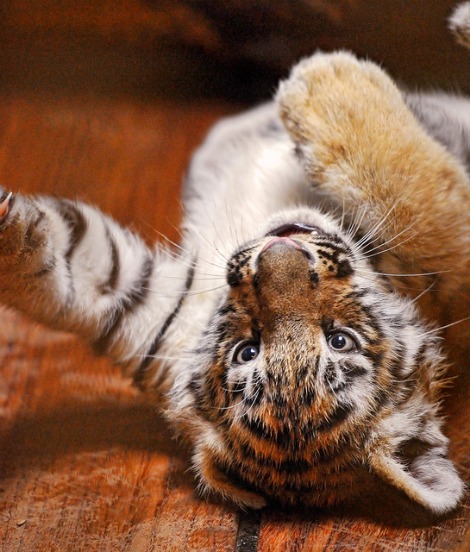 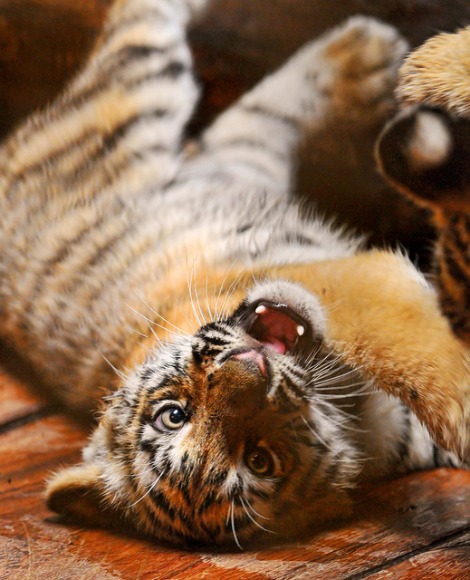 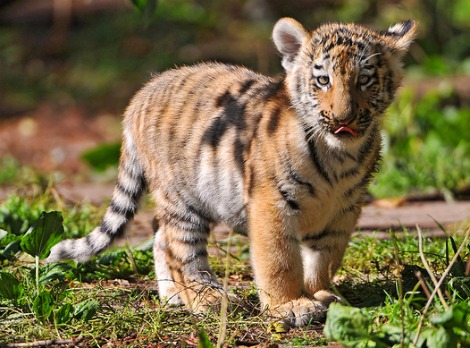