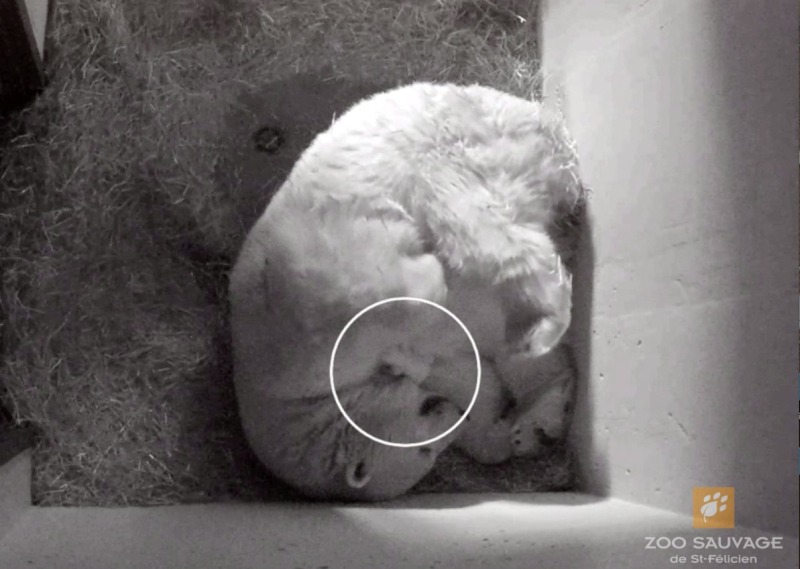 On the morning of November 27, zoo keepers arrived at Zoo Sauvage and heard the strong cries of a newborn cub coming from the Polar Bear den. Female Aisaqvak had given birth to a cub.

No Polar Bear had raised a cub at Zoo Sauvage since 2009, and the Polar Bear care team worked diligently to bring about another pregnancy. In 2011, a new adult male named Yellé arrived, and the team had high hopes that he and Aisaqvak would produce a cub. But despite the fact that the two Bears showed great interest in each other over several years, Aisaqvak did not become pregnant. A new male named Eddy arrived from the Aquarium du Québec in 2015, but over two seasons, he and Aisaqvak did not produce a cub. The staff decided to bring back Yellé in 2017, and breeding success was finally achieved in 2018. 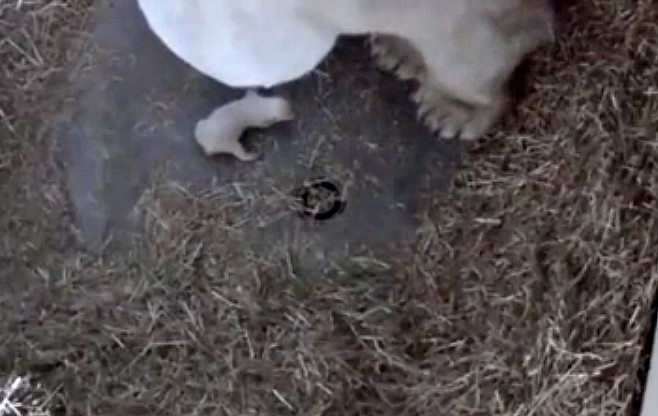 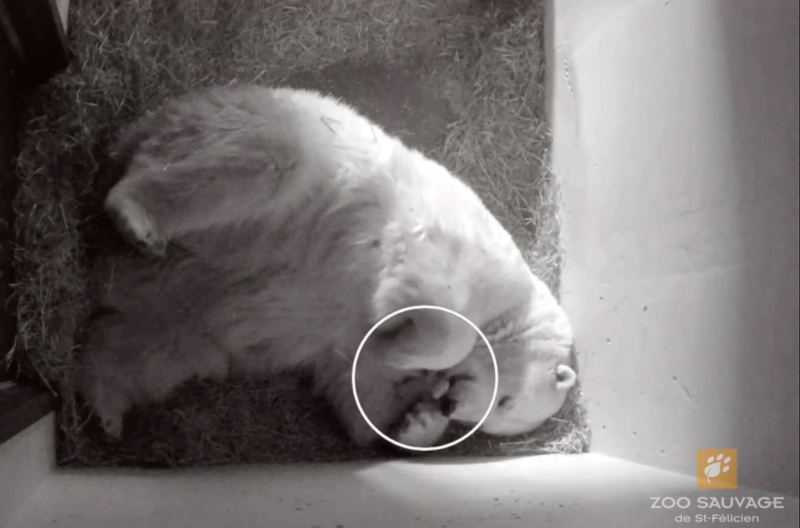 Why did Aisaqvak and Yellé produce a cub this year and not in previous years? No one knows for certain, but the staff is overjoyed at the baby’s birth. The cub is significant because it introduces new genetic material into the zoo-dwelling population of Polar Bears. Aisaqvak was born in the wild, and Yellé has never reproduced before.

Newborn Polar Bears are very tiny in comparison to their mothers. Babies weigh just over one pound, while Aisaqvak weighs 727 pounds. The cub’s chances of survival are still precarious. However, the team sees hopeful signs that Aisaqvak is taking excellent care of her newborn. In addition, closed-circuit cameras allow the staff to watch every move as Aisaqvak and the baby bond in their private den. They two will remain in the den for several months, which is how mother and baby Polar Bears behave in the wild. Cubs begin walking at about three months of age. The baby’s gender will not be known for several months.

Wild Polar Bear populations are decreasing, as are populations within zoos. Polar Bears are classified as Vulnerable by the International Union for Conservation of Nature (IUCN). In 2006, 364 Polar Bears resided in zoos worldwide. In 2015, only 298 Polar Bears lived in zoos. Wild Polar Bears face threats from warming seas and shrinking sea ice, which affect their ability to hunt and capture prey.

Cougar Birth A Welcome Surprise For Keepers At Zoo Sauvage 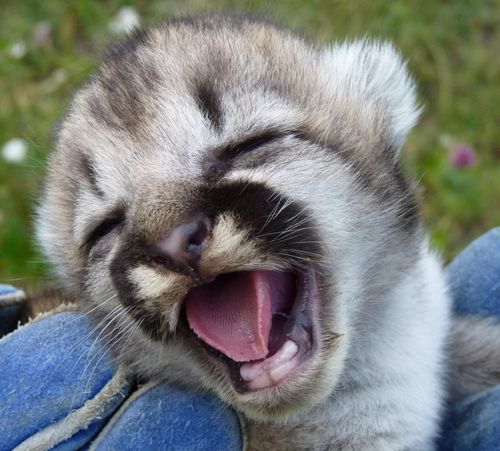 Keepers at Zoo Sauvage in Quebec, Canada suspected the arrival of a newborn Cougar when they observed a change in one of their female's behavior. The confirmed birth of a new cub has keepers excited but cautious, so mother and cub have been seperated from the other Cougars on exhibit. Stay tuned for more information and updates as they become available. 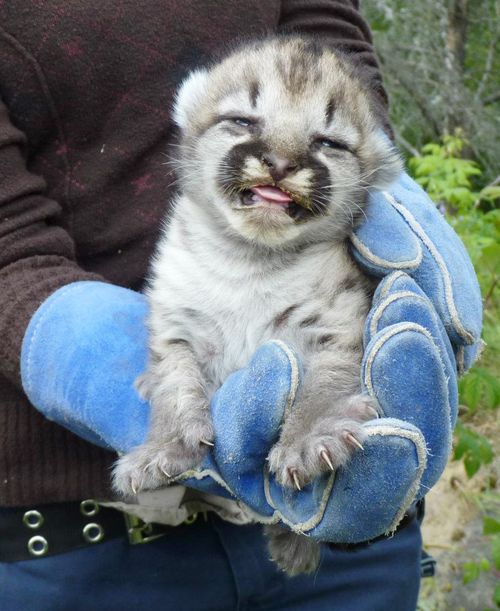 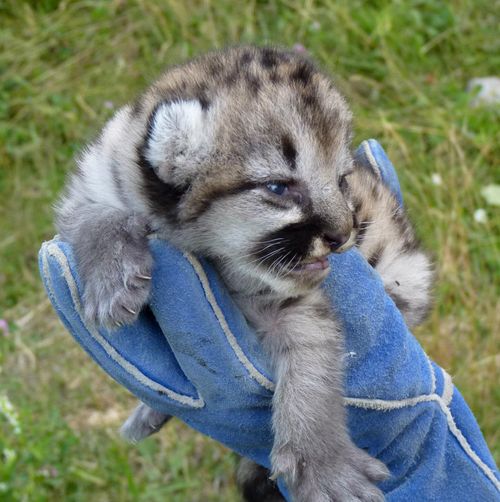 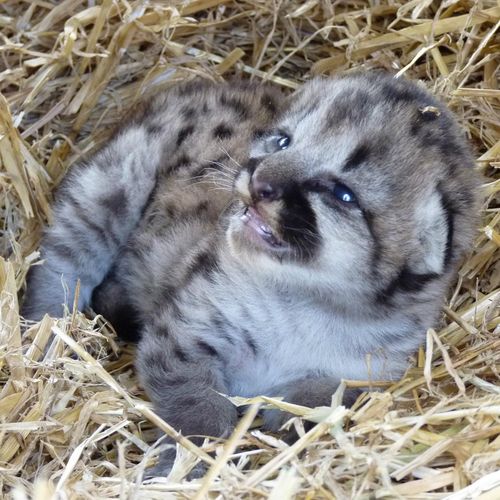 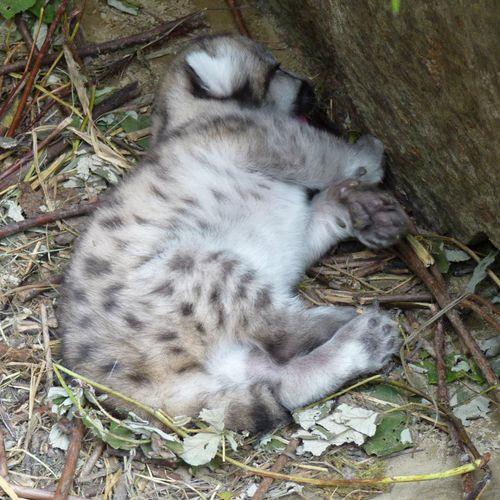 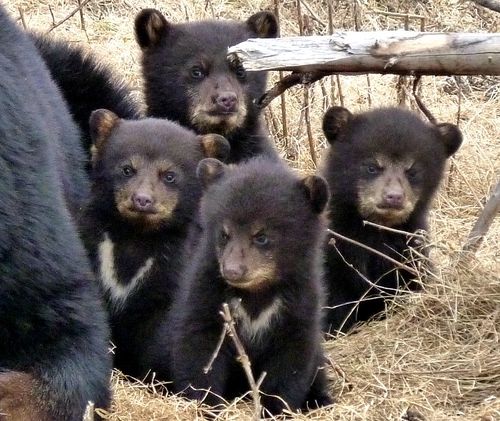 When Zoo Sauvage's twelve year old mama Black Bear emerged from the den after hibernation this spring, she brought a surprise… or four. Bear cub quadruplets are rare and usually reflect a healthy mother who is larger than your average bear - this she-bear fits the bill. Zoo Sauvage de St-Félicien's Black Bears live in an open 824 acre habitat called Nature Trail Park. 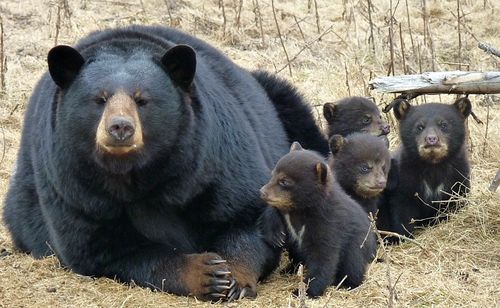 Time to check in once again on our favorite polar bear cubs at Quebec's Zoo Sauvage via the grainy den cam. This time we catch the bears in the midst of a feisty and fluffy wrestling match.

And here we have one of the cubs trying to get comfortable atop mom's head.

Time to check back in on our favorite growing little polar bear cubs via the cub-cam at Quebec's Zoo Sauvage. Watch them "rough-house" in the comfort of mom's fluffy white fur.

Getting cozy within mom's fur at Quebec's Zoo Sauvage. Who would have thought this noisy little Polar Bear cub could look this peaceful?

Note that these grainy low-light videos are not so much cute as they are EXTREMELY noisy. Mother Polar Bears should be issued Aspirin.