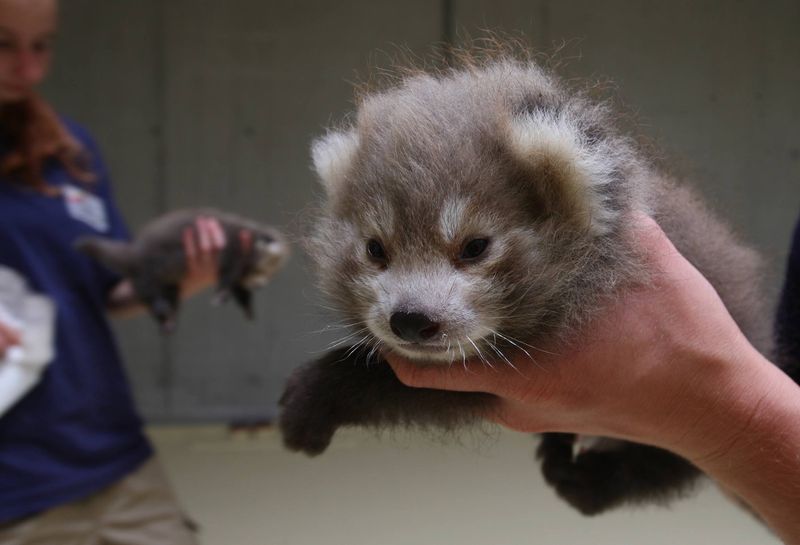 Two Red Panda cubs were born this spring at Austria’s Zoo Salzberg, the first birth of this species at the zoo in more than 13 years. 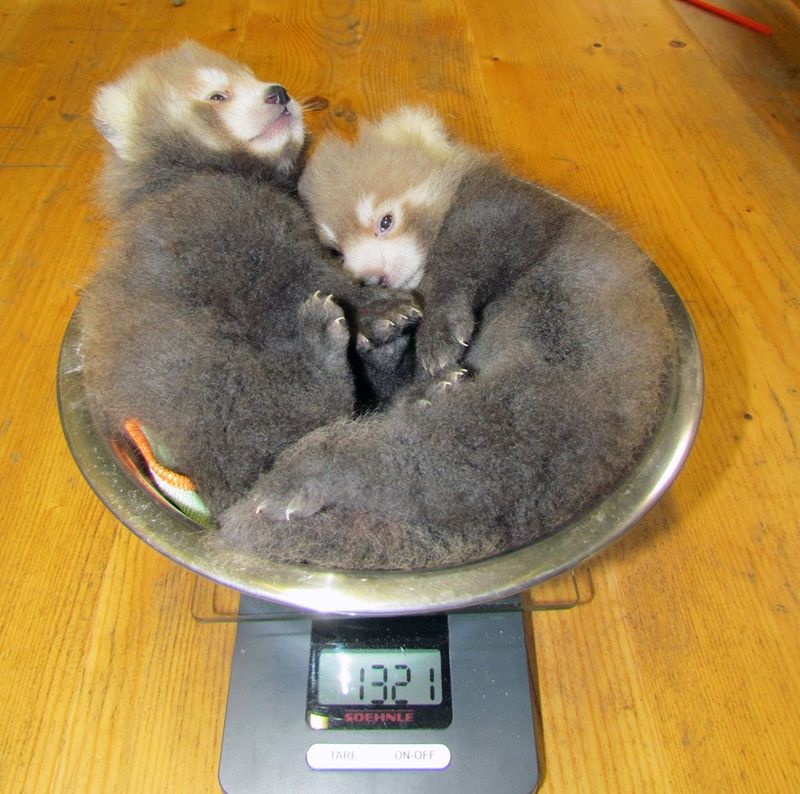 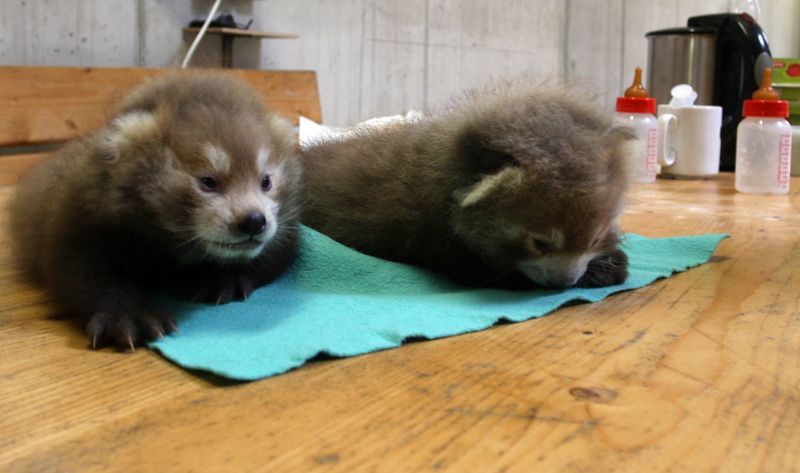 The cubs were born to parents Banja and Eros, but are now being hand-reared by the staff after the loss of female Banja in July.

Under the care of zoo keepers, the cubs are developing well and now have their eyes open and weigh about one pound each.

Red Panda cubs typically emerge from the nest box at 12 weeks old, and are weaned at around five to six months of age.

Native to mountain forests in China, Nepal, and Myanmar, Red Pandas are listed as Vulnerable by the International Union for Conservation of Nature.  Loss of habitat, caused by a near doubling of the human population in the region in the past 30-40 years, is the primary threat to the species.  As their forest habitat is broken into smaller and smaller chunks, the risk of inbreeding within smaller populations increases.

These two cubs will be an important part of the worldwide effort to maintain a genetically diverse Red Panda population within zoos. 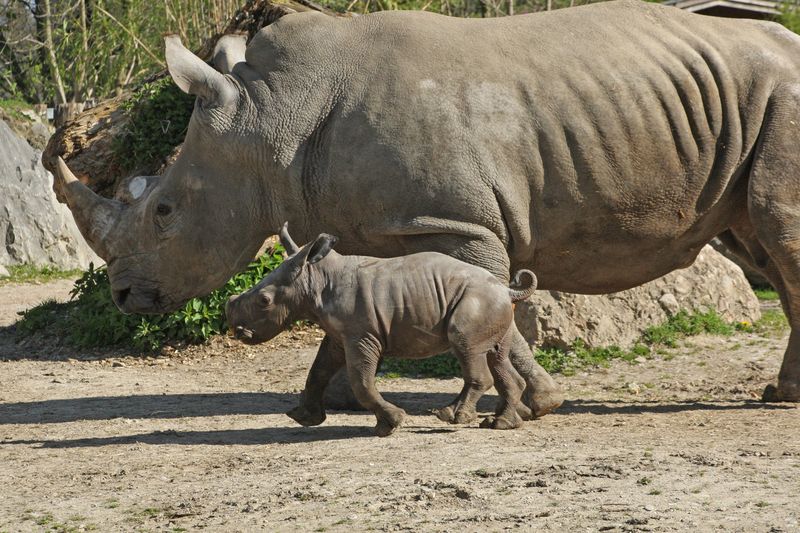 On April 4th, Zoo Salzburg’s Southern White Rhino, ‘Tamu’, gave birth to her first offspring. The healthy male calf arrived, without complications, and was up on his feet an hour after birth. “Our joy is huge,” says Managing Director, Sabine Grebner. “After 505 days gestation period, our 9 year old White Rhino cow, Tamu, brought a healthy Rhino boy into the world at 5:05 in the morning.”

Tamu’s little boy is now a rowdy 12-day-old, and he recently enjoyed time in the spring sunshine with his mother. 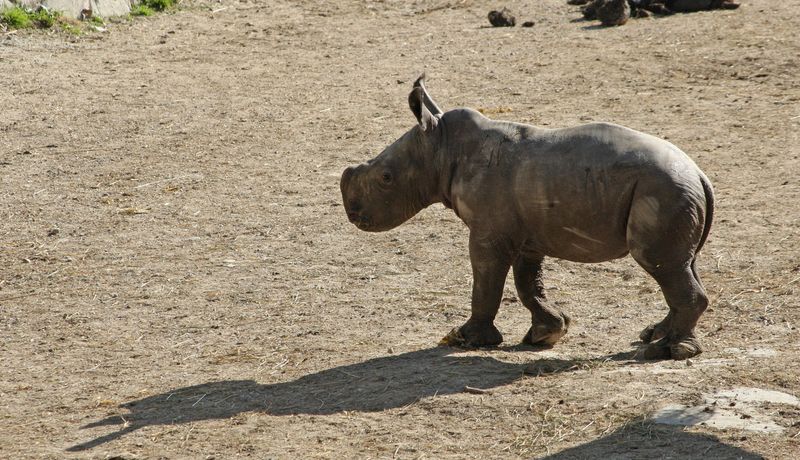 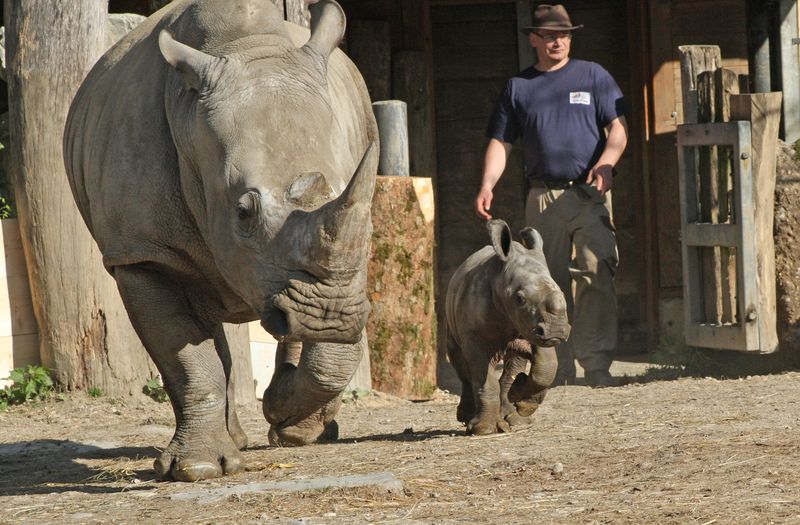 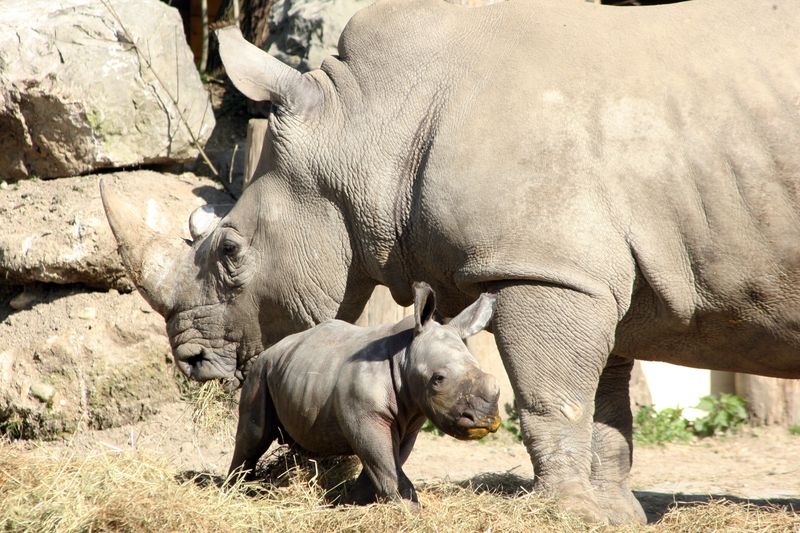 In recent news, it was widely reported that the only known male Northern White Rhino, in existence, is being protected with 24 hour security, at Ol Pejeta Conservancy in Kenya.

A Tiny Cougar Weighs In at Zoo Salzburg 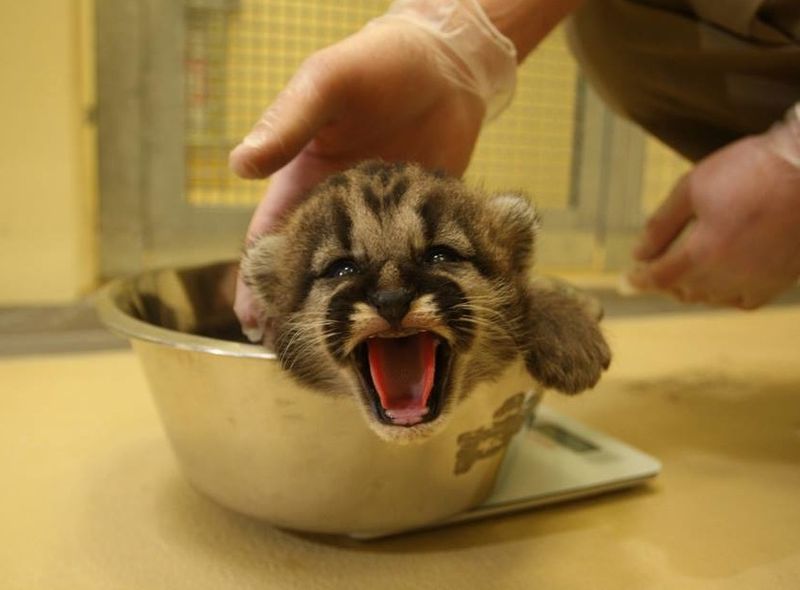 On December 24, a healthy male Cougar was born at Zoo Salzburg in Austria! Cougars may have a litter of up to six cubs, but typically give birth to two. This time, a single cub was born and mom, 14-year-old Winnie, devotes all her care to this little one.

Cougar cubs are born after a gestation period of about three months. Cubs are born with their eyes closed and weigh slightly less than one pound (about 400 grams). Within ten days, the cubs open their bright blue eyes. This startling eye color, along with their spotted baby-coats, changes by around six months of age. Depending on the cat's habitat, their fur may range in color from silver-gray to reddish-brown. 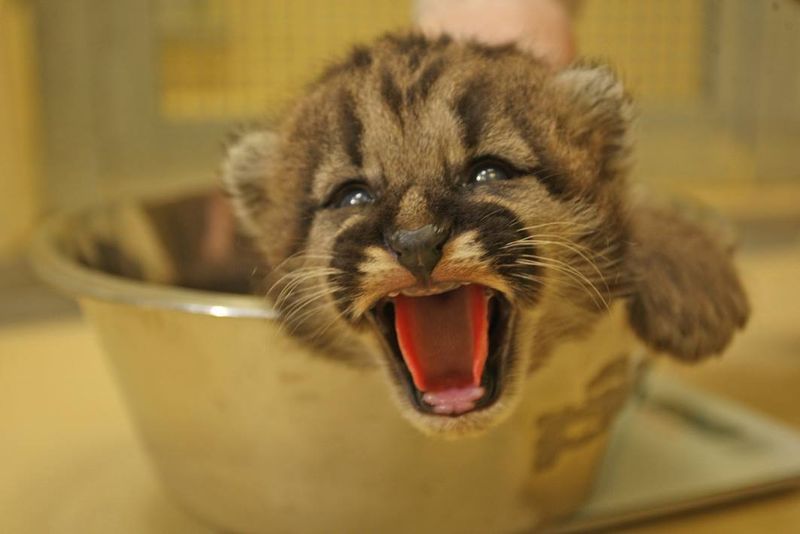 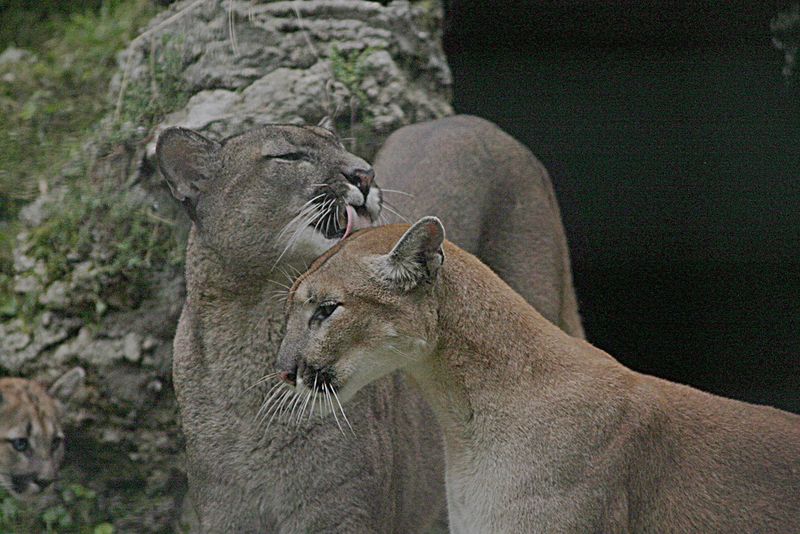 Photo credits: Zoo Salzburg
The proud parents, Winnie and Yagul. In this species, mothers raise offspring without help from the father.

Cougars, also known as Mountain Lions, Pumas, Panthers, or Catamounts, are native to the Americas. The Cougar is listed by the International Union for Conservation of Nature as a species of 'Least Concern'. This is because they are found widely across North and South America, from Canada through the southern tip of Chile. However, it is considered as a species in decline, and some populations have been drastically reduced or extirpated (meaning extinct in a particular region where they used to live).

Like most cats, Cougars are solitary creatures. Depending on the type of habitat, they may require very large home ranges for successful hunting. This makes them  vulnerable to habitat loss and fragmentation, as well as to the decline of prey animals.  Because they may resort to taking livestock, they also face persecution by humans. A trio of Cheetah cubs was born on June 28 at Zoo Salzburg in Austria. The trio, which consists of two males and one female, were born to mother Ginger. Ginger is taking great care of her cubs, who have grown considerably since their birth. Born at 250 grams each (about 1/2 pound), the males now weigh 1,200 grams each (2.65 pounds) and the female weighs 900 grams (just under 2 pounds). 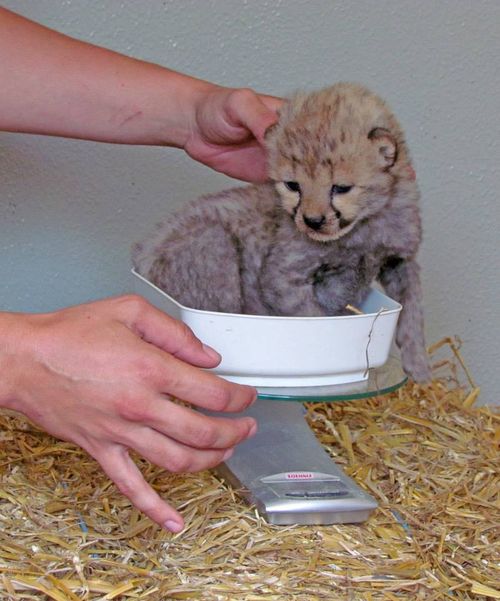 Cheetahs have a short gestation period of about 90-95 days. Young Cheetah cubs have a greyish coat and lack the distinctive spot markings of their species. Cheetahs are currently listed as Vulnerable to Extinction, with under 12,500 individuals remaining in the African wild. Native to Africa and southwestern Asia, a small population of the species also exists in Iran. Adult females are solitary, while males live in social groups. Females are very selective in choosing mates, and their social and breeding behaviors tend to make breeding within zoos a challenge. 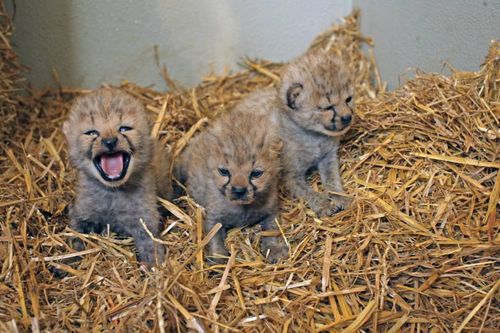 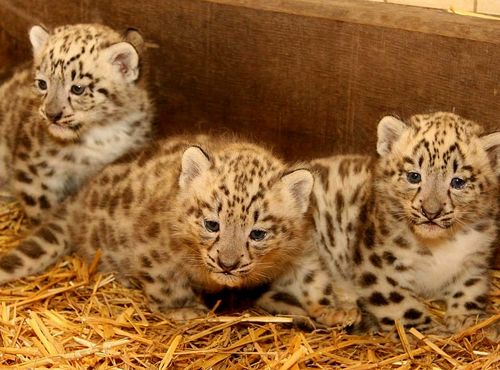 On April 29, three Snow Leopard kittens were born at the Austria’s Zoo Salzburg – the fourth litter for 11-year-old female Mira and her 12-year-old mate, Shankar. 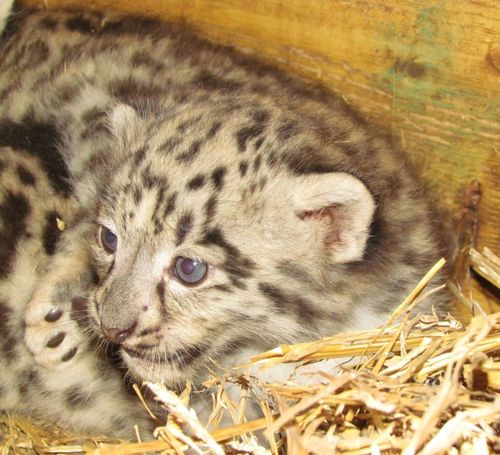 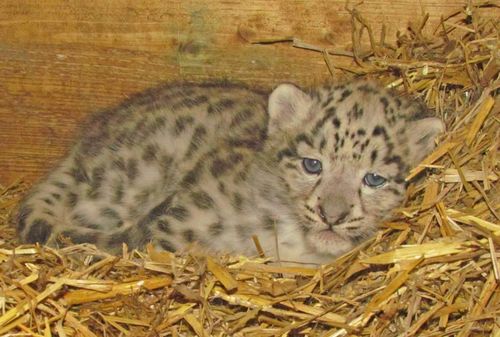 Snow Leopard cubs are born blind and weigh about one pound (0.5 kg). About seven days after their birth, the cubs opened their eyes and took their first clumsy steps. Mother Mira is taking excellent care of her offspring, so it’s not surprising that the cubs doubled their weight in just six weeks.

Snow Leopards are one of the most endangered big cats on earth. Poaching, illegal trade, and habitat destruction threaten the survival of this majestic cat species in the wild. Experts estimate that only 3,500-7,000 Snow Leopards survive in the high mountain regions of Central Asia. Exact figures are not available, unfortunately, because these animals are rarely seen in their natural habitat, which is rough and remote.

See more photos of the cubs below the fold.

UPDATE: Baby Tapir at Salzburg Zoo is a Girl! 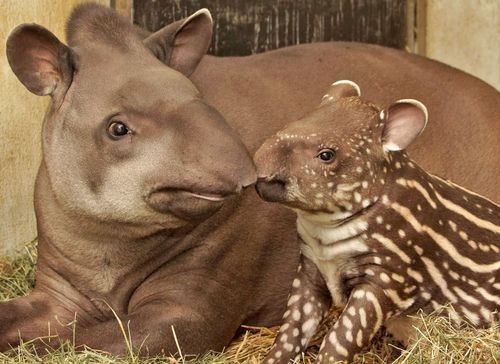 Salzburg Zoo's new baby South American Tapir that ZooBorns first covered HERE is growing and thriving. Though it was born on March 1, vets only recently determined that it's a girl! Since then, the zoo has been asking the public to submit names for her and will decide on one very soon.

In the mean time, Mom Bibi has had to keep a watchful eye, since her little one has been into all sorts of mischief. What kind? You can see for yourself on the zoo's webcam, found on their website's homepage. You can tune in to see the the baby napping, playing or cuddling with Bibi, or nursing as seen on the webcam yesterday morning. 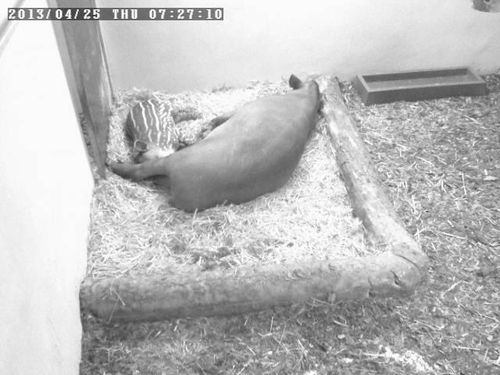 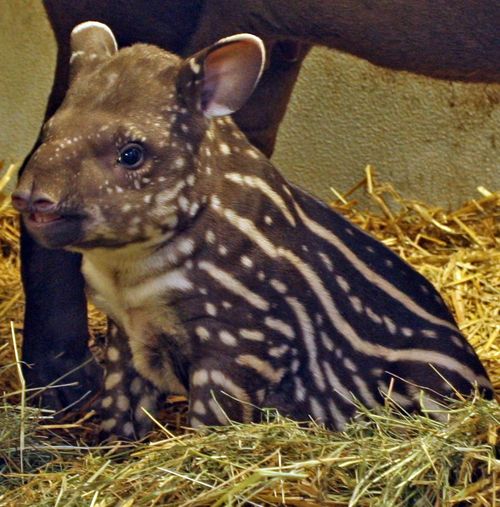 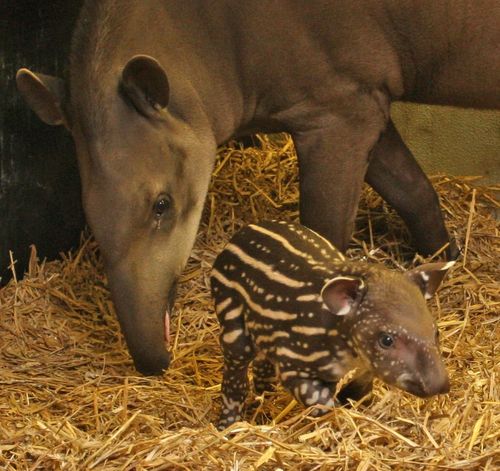 The IUCN lists the South American Tapir as vulnerable, due to the 30% population decline that has occurred over the past three generations. They are threatened by deforestation, competition with grazing livestock, and hunting. As large foragers, they are especially sensitive to habitat disruption. 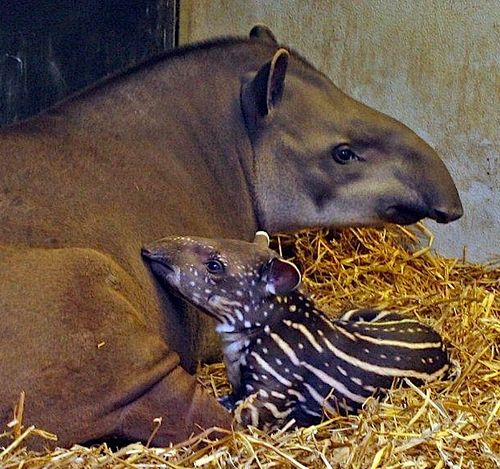 A healthy, five-pound tapir was born on March 1st at Zoo Salzburg. The sex of the cub has not been determined yet. The first-time mother, Bibi, is taking good care of her cub. Bibi came to Zoo Salzburg last year from Zoo Brno in the Czech Republic.

Tapir cubs are born with white spots and stripes that help them to camouflage in the rainforest understory of South America. They begin to lose their stripes at one to two months, and have an unmarked adult coat at six months old. 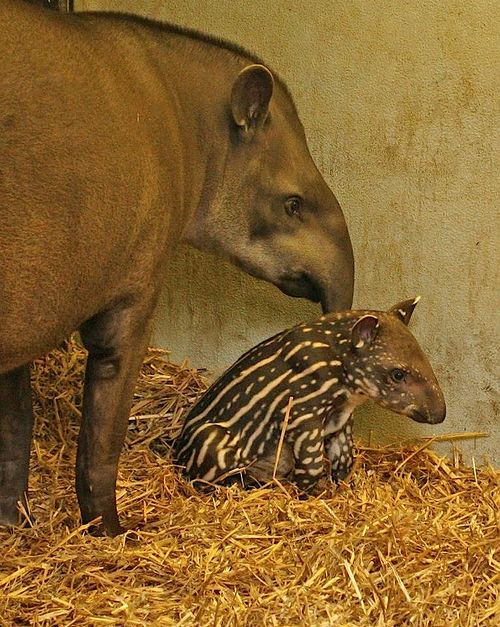 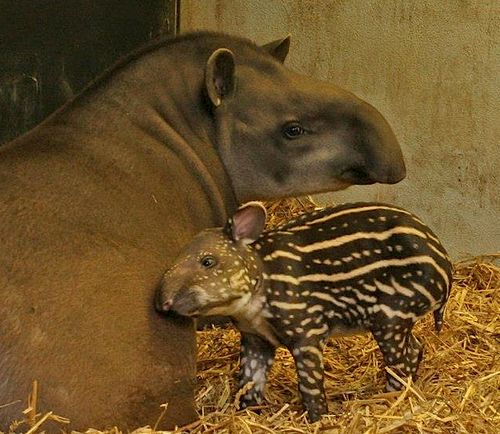 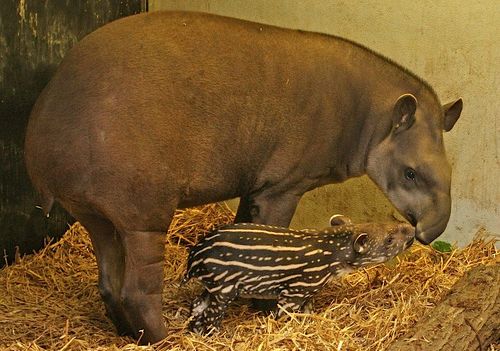 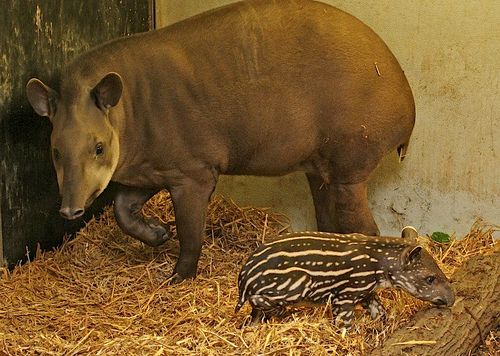 Read more after the fold.