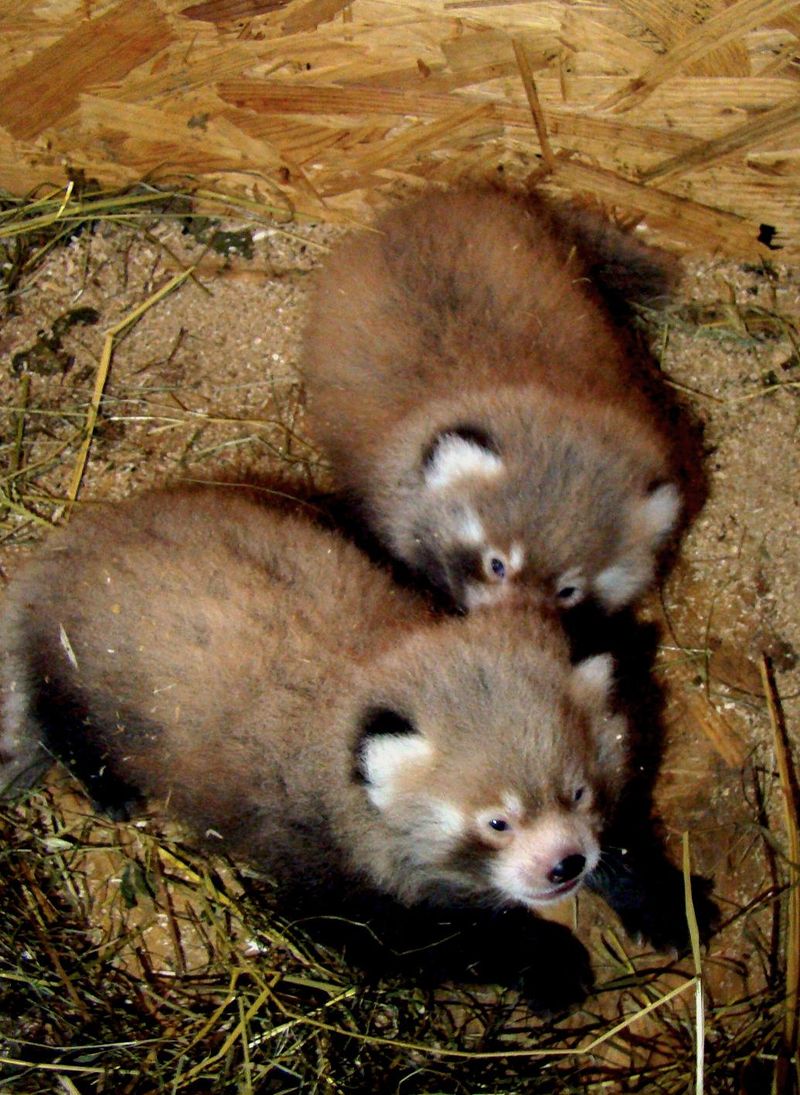 For the first time in Zoo Liberec’s history, they have succeeded in breeding Red Pandas! A pair of young pandas was born, on June 28, at the Czech Republic zoo.

The brother and sister are the offspring of mom, Lotus, who arrived at Liberec from the French Zoo de Bordeaux-Pessac. The father is Kamala, who came from Paradise Park in Cornwall, UK. 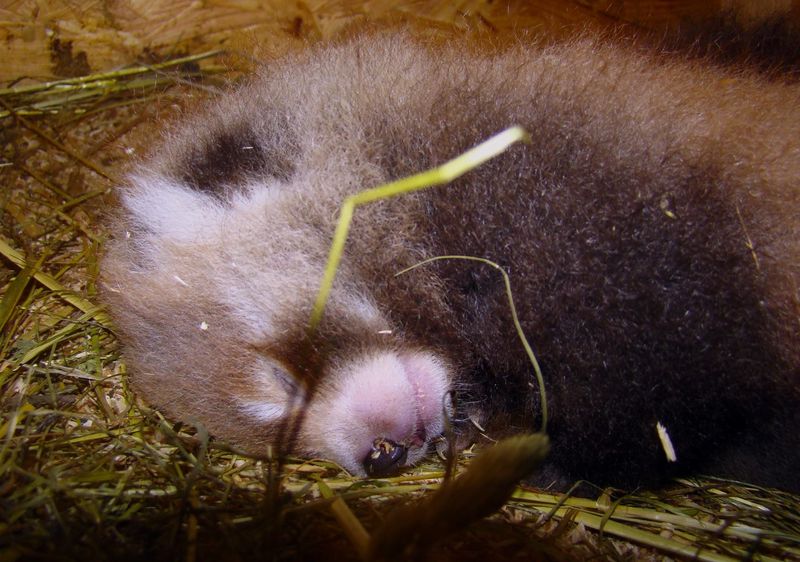 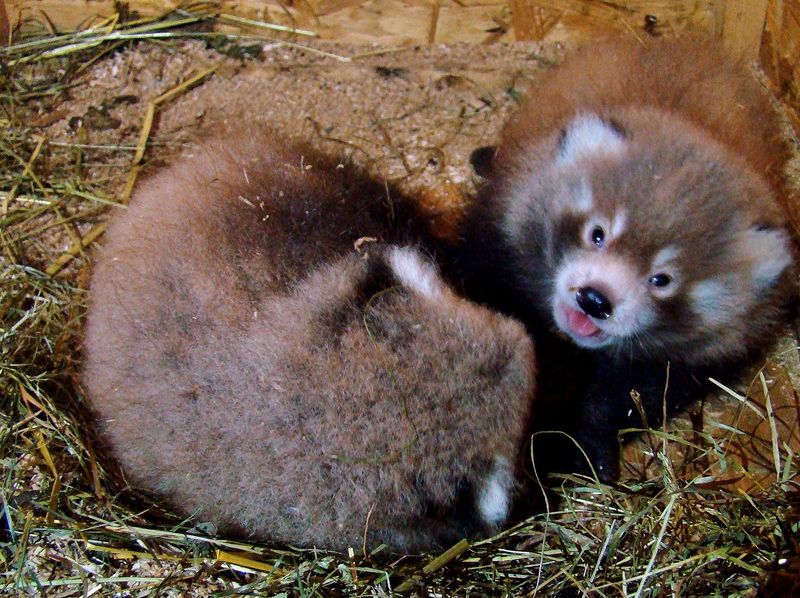 The twins are yet-to-be-named, but zoo staff are intent on them having Asian inspired monikers. The Zoo anticipates them being on public display by September when they will be old enough to begin exploring on their own. They are currently safely tucked away under their mom’s care and supervision.

Red Pandas are native to the eastern Himalayas and southwestern China. They are slightly larger than a domestic cat. They are omnivorous, feeding mainly on bamboo, but they are also known to eat eggs, birds, insects, and small mammals. They are solitary and are mainly active from dusk till dawn.

The Red Panda is the only living species of the genus Ailurus and the family Ailuridae. It had been previously placed in the raccoon and bear families, but results of phylogenetic research indicate strong support for its taxonomic classification in its own family Ailuridae, which along with the weasel, raccoon and skunk families, is part of the superfamily Musteloidea. The Red Panda is not closely related to the Giant Panda.

New Zebra Not 'Plain as Black and White' 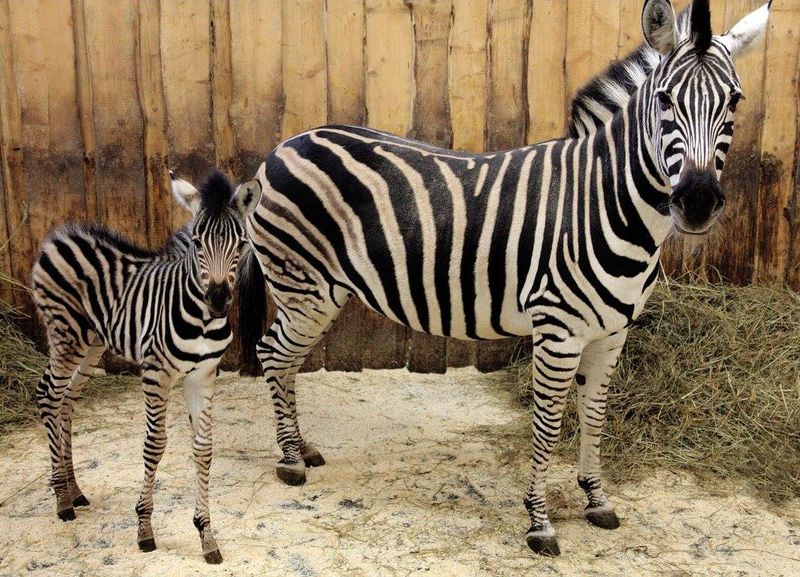 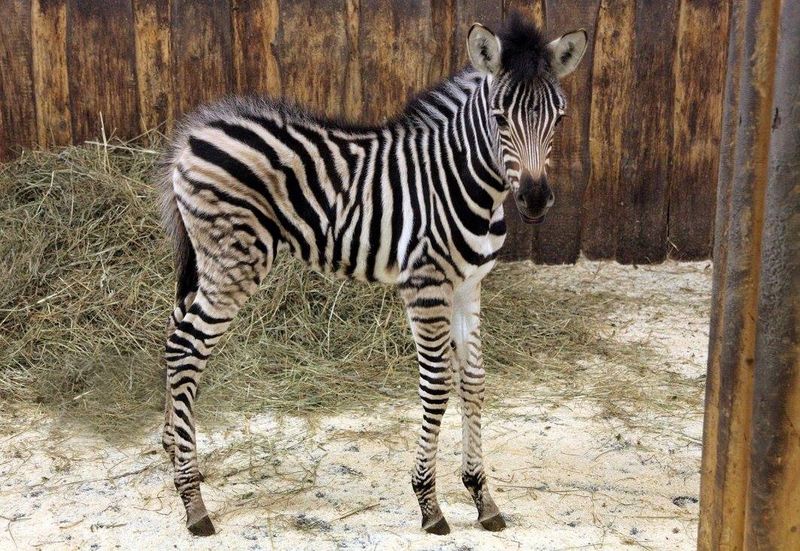 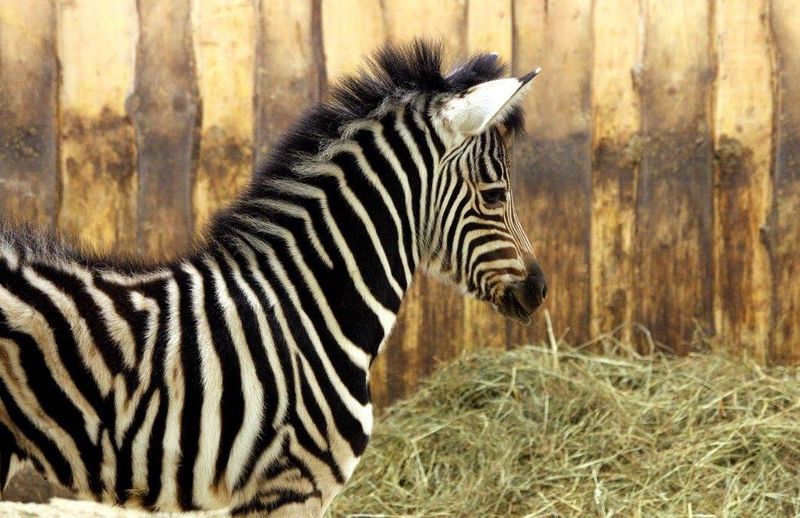 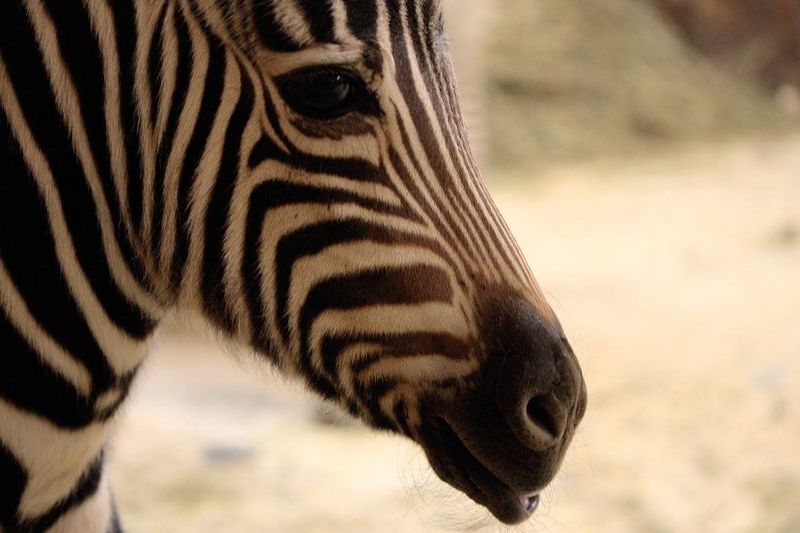 Chapman’s Zebra is a subspecies of the plains zebra. Like their relatives, they are native to the savannah of north-east South Africa, north to Zimbabwe, west into Botswana, Namibia, and southern Angola.

The Chapman’s Zebra eats mainly grass and occasionally shrubs. They are distinguished by stripes on the lower halves of the legs, which break up into many irregular brown spots. When foals are born, they have brown stripes, and in some cases, adults do not develop the black coloration in their fur and keep the brown stripes.

Chapman’s Zebra are currently classified as “Least Concern” on the IUCN Red List, but they are at risk due to habitat destruction and illegal poaching.

The Zoo Liberec is the oldest in the area of former Czechoslovakia. It was founded in 1919. It was originally used, in part, as the winter quarters for circus animals.

Today, the zoo breeds more than 170 species with an overall number of 1000 individuals. More than 500 animals are registered in different European conservation programs, such as EEP, ESB and RDB. These national programs try to save species facing extinction.

UPDATE: Maned Wolf Pups Come Out of Hiding to Visit the Vet 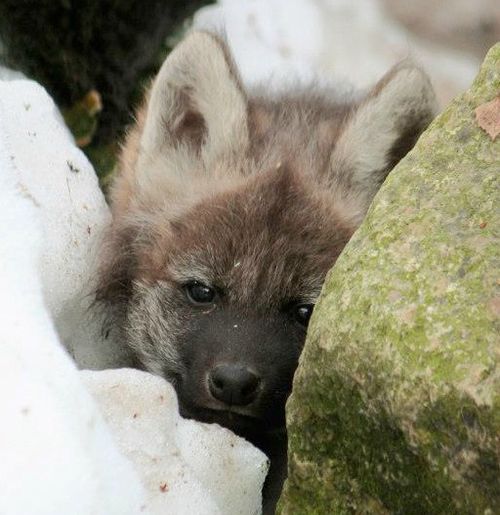 Two Maned Wolf Pups born at the Czech Republic’s Zoo Liberec on January 10 had their first visit to the veterinarian this week to receive vaccinations and determine their gender.  The pair, a male and a female, was proclaimed in excellent health by the veterinary staff.

The pups, who were profiled on ZooBorns last month, weighed only about a pound (.5 kg) at birth, but they have rapidly gained weight.  At the exam, each weighed more than six pounds (2.8 kg). The pups are the first Maned Wolves ever born at Zoo Liberec. 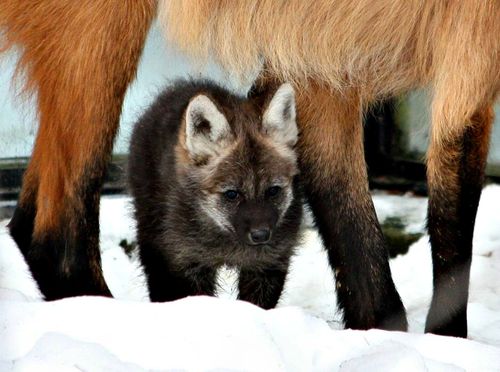 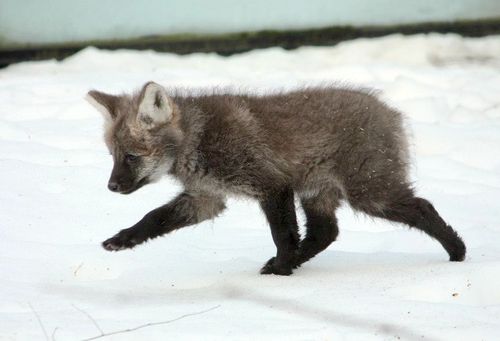 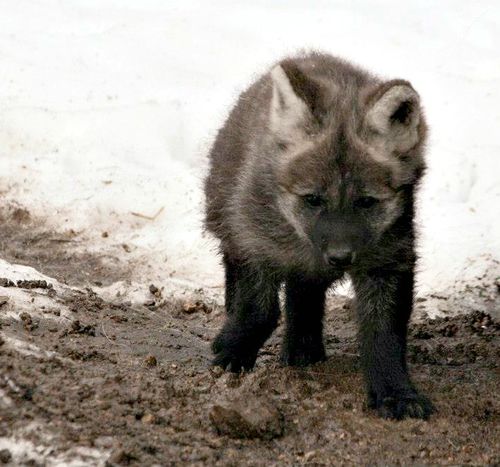 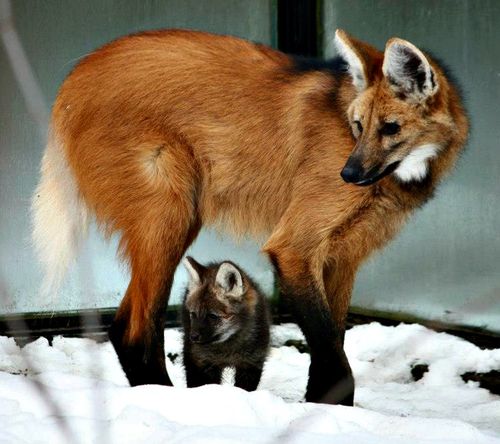 Native to South America, Maned Wolves are unique among canids.  They are distinguished by long legs, a bushy mane which is erected when the Wolf is threatened, and a skunk-like odor.  Maned Wolves live solitary lives roaming the grasslands of central South America.  They eat small mammals as well as tubers, fruits, and sugarcane.

Maned Wolves are listed as Near Threatened by the International Union for Conservation of Nature (IUCN), but in some parts of their range, notably in Uruguay, this species may be nearly extirpated (locally extinct).

Maned Wolf Pups Romp in the Snow at Zoo Liberec 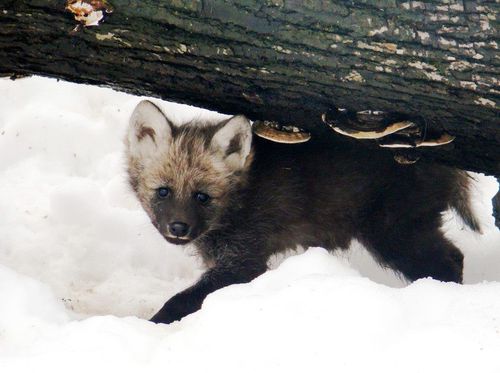 For the first time in its history, Zoo Liberec in the Czech Republic welcomed a litter of Maned Wolf pups to their institution. After a two month gestation, mother Samantha gave birth to four pups back on January 10th. However, after two of the original four litter-mates failed to survive, zoo officials waited to ensure that the second two pups were in good health before announcing the birth to the public.

Although the newborns weighed only around 16 ounces at birth, this small size won't last long. The pair will be grow rapidly until they reach their full grown size of between 45 and 75 pounds at one year of age. The two curious pups have begun to venture out of their indoor den and into the publicly visible exhibit. With a little patience, visitors may be able to catch a glimpse of the adventurous duo. 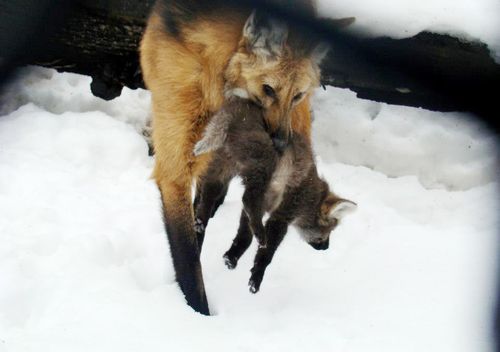 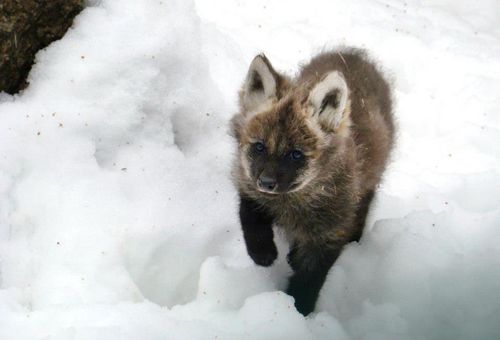 The Maned Wolf, the tallest of any wild canid, is native to South America. Due to its reddish-brown coloration, the Maned Wolf is often mistakenly thought to be related to the red fox. In fact, the Maned Wolf is not closely related to any living canid and is classified as its own genus, Chrysocyon. Making its home in the open and semi-open grasslands of the eastern portion of central South America, the Manned Wolf feasts on a omnivorous diet including small to medium sized prey such as rodents and fish, and a variety vegetable matter. The Manned Wolf population currently has a modest number of individuals. Despite this however, primarily due to habitat loss, the species is listed as "near threatened" by the IUCN.

See more photos after the fold:

Zoo Liberec's First Baby of the Year is a Tall One! 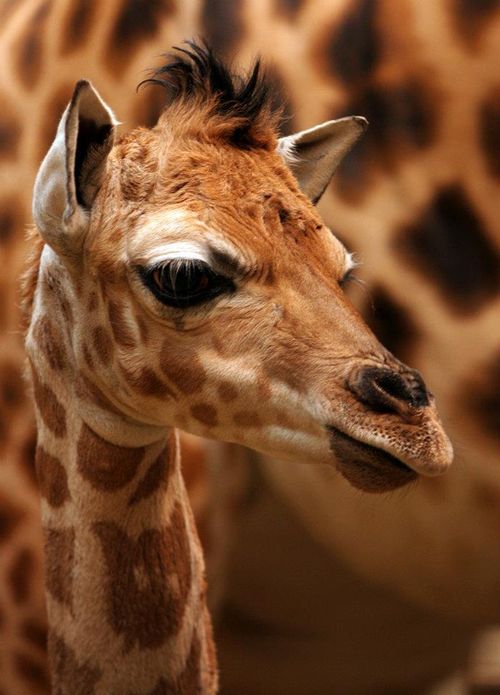 Zoo Liberec, in Liberec, Czech Republic, welcomed a female Rothschild Giraffe calf on Saturday January 7. This first birth of the year for the Czech Zoo has zoo officials very excited, and visitors will soon be able to visit the calf in person. Rothschild Giraffes are one of the most endangered Giraffe subspecies, with only a few hundred left in the wild. It has recently been proposed that this breed of giraffe is actually a separate species of giraffe entirely. 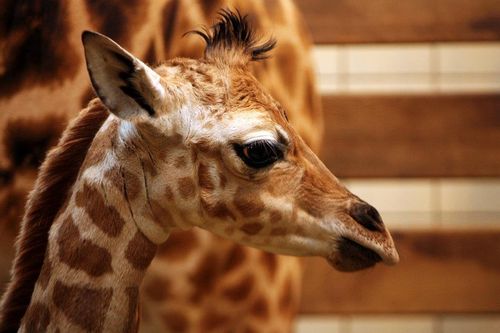 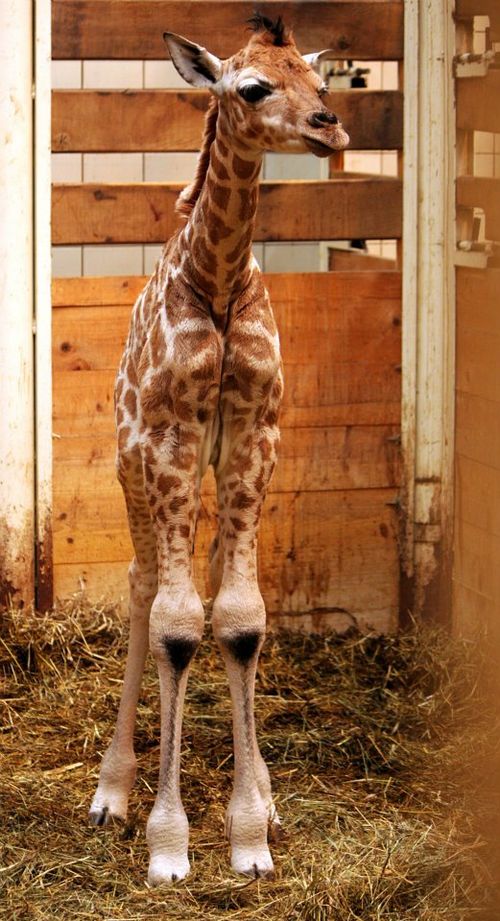 The distinguishing characteristics of Rothschild Giraffes from other Giraffe subspecies include the markings on it's pelt. While reticulated Giraffes have clearly defined dark patches separated by whitish channels, the Rothschild Giraffe, like the Masai giraffe, exhibits less sharply defined dark patches and creamier hued dividing channels. It also gives the appearance of wearing stockings, since its spots don't continue below its knee joint. The Rothschild Giraffe subspecies has a total of five horns: two on top of its head, a third horn in the center of its forehead, and two more behind its ears.

Alternatively this might be a young white pelican chick at Zoo Liberec in the Czech Republic but we'll just have to see what it grows into...