Stevie, the 6 month old chimp, is getting to know her new family at Zoo Knoxville. Due to complications at birth, Stevie has been hand raised for most of her life. Recently Stevie was introduced to Daisy and Jambo, two female chimps in her troop. Both adults have shown a strong interest in the young chimp. This is one of the first major steps in preparing Stevie to meet the rest of the chimps at Zoo Knoxville, but for now zoo keepers are keeping a close eye on the growing relationship between Stevie, Daisy and Jambo.

Stevie The 5-Month-Old Chimp Is Taking Some Big Steps At Zoo Knoxville!

Due to complications at birth, Stevie had to be hand-raised. To integrate back more easily into the troop, it is crucial for a hand-reared infant chimp to develop normal social behaviors early on.

Stevie currently has a feeding at midnight. This is something she will need to be able to drop so that the routines of the other chimps are not disrupted by this late-night feeding.

In the meantime, Stevie is hitting all her milestones and getting used exploring her home!

Chimpanzees are being driven to extinction by habitat loss, disease, and their biggest threat, illegal poaching. Zoo Knoxville is working in partnership with 32 other zoos accredited by the Association of Zoos and Aquariums (AZA) to ensure a healthy population remains as hope for the future.

America’s red wolf has faced extinction for decades. Zoo Knoxville is doing its part to make sure that red wolves not only survive, but that they begin to repopulate in the wild here in the U.S. Hear from Assistant Director of Animal Care, Kelly Cox of Zoo Knoxville talk about what led to the diminishing numbers of red wolves and what is being done to save them.

Zoo Knoxville is excited to announce the birth of an endangered African lion cub. The female cub, born on June 16, is the third offspring of father Upepo and mother Amara, and sibling to 6-month-old cubs Magi and Anga.

Amara is nursing and caring for the cub, who is healthy and thriving. However, Amara experienced complications with the delivery and is being closely monitored by her care team. After the birth of the female cub, Amara continued to show signs of labor but when she didn’t progress an ultrasound was performed, showing a stillborn cub lodged in the birth canal. 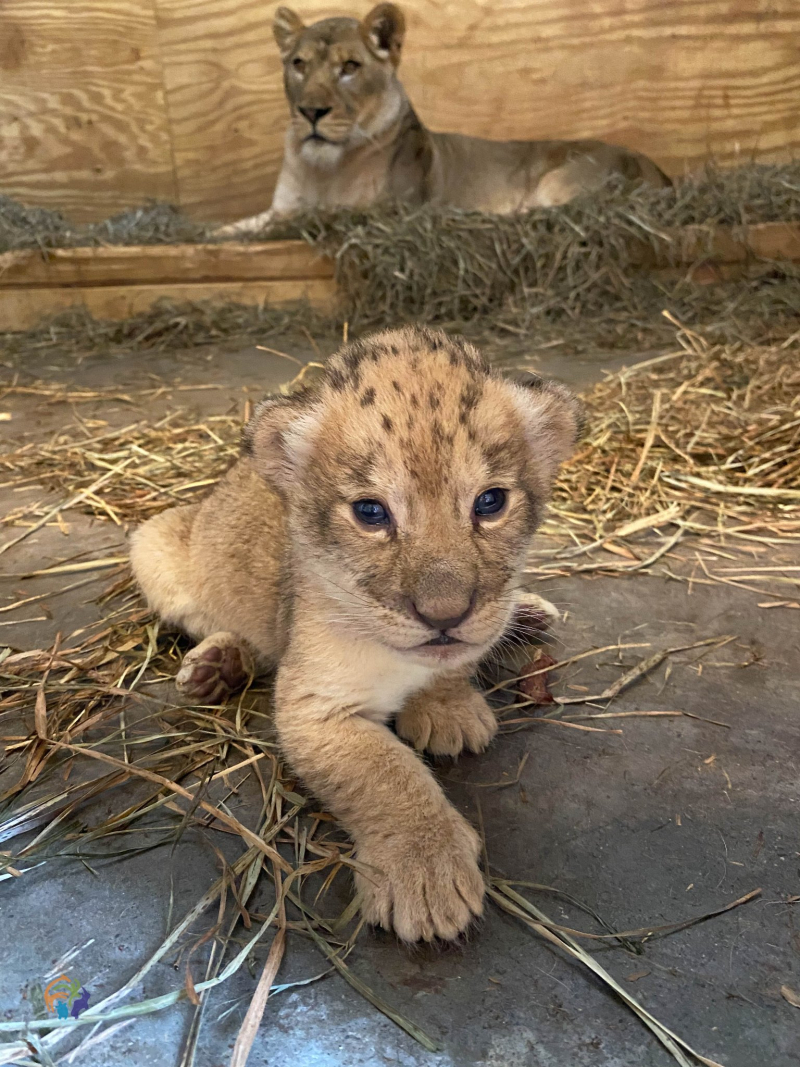 How Cute Are These Inch-long Baby Chameleons?

Meet some of the newest additions to Zoo Knoxville’s Amphibian and Reptile Conservation Campus (ARC), three Minor’s chameleons have just hatched after eight months of incubating. These tiny newcomers are only about one inch long. This species is endemic to Madagascar and is endangered due to mining and logging in their natural range.

She is meeting all of her milestones and eating on demand. Each day consists of bottles, weight and temperature checks, and outdoor time. She also is slowly being reintroduced to the troop who see her daily. 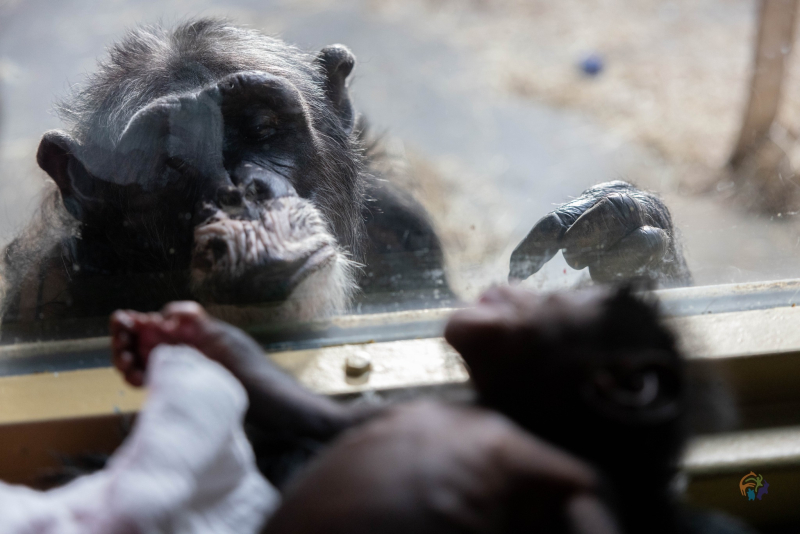 Zoo Knoxville’s goal is to reintroduce her to the troop, beginning with the other females. This will require waiting until Stevie is more mobile in the coming months and training the other females to help care for her.

Can We See the baby?

We currently have no scheduled viewing times for guests to see Stevie. Providing the best care for all of the chimpanzees in our troop will continue to be Zoo Knoxville’s top priority. Chimpanzees are an Endangered species, and being driven to extinction by habitat loss, disease, and their biggest threat, illegal poaching. Zoo Knoxville is working in partnership with 32 other zoos accredited by @zoos_aquariums to ensure a healthy population remains as hope for the future. #wildlyfun #knoxville #chimpanzee #zookeepers #alwayscaring

Meet Maji and Anga And Watch Them Meet Mom!

The Zoo Knoxville African lion cubs names have been chosen, Maji and Anga! The names are Swahili in origin, Maji for the male meaning water and Anga for the female translating to sky. These little ones just turned a month old and are growing up so fast. This week they began visits to the Valley of the Kings for howdy with their parents.

Zoo Knoxville is celebrating the birth of two endangered African lion cubs, who were delivered by emergency Cesarean section surgery on Tuesday, Dec. 21. The cubs, one male and one female, are the first offspring of father Upepo and mother Amara and the first lion cubs born in Knoxville since 2006.

The survival of both cubs and their mother is due to the quick action of her care team at Zoo Knoxville. Amara was expected to give birth in mid to late December, and she was being closely monitored. When she began showing signs of labor but delivery was not progressing, Amara was put under anesthesia and transported to the zoo’s animal clinic so an ultrasound could be performed. It revealed that a cub was lodged in the birth canal in a breech position, endangering Amara and the other cubs. The care team, which included veterinarians from UTCVM-University of Tennessee College of Veterinary Medicine, made the decision to perform emergency surgery. Four cubs were delivered, but two did not survive. The quick intervention saved two of the cubs, who are healthy, vocal, and being cared for around the clock by zoo staff with expertise in natal care.

Orange You Glad There’s Another Langur Baby To Report?

Join us in welcoming Zoo Knoxville’s newest BRIGHT ORANGE troop member! Born on Dec. 12, it is the third Silvered Leaf langur baby to be welcomed to Zoo Knoxville since they began working with the species in 2017.

The infant is healthy and nursing and being closely monitored to ensure it continues to thrive. Langur babies will keep their striking bright orange coloring for three to six months, then begin to transition to darker fur like the other members of their group.

It has not been determined if the yet-to-be-named infant is a boy or a girl. The zoo’s family of silvered leaf langurs, made up of males Walter and Opie, and females Teagan, Melody, Lucy and Coda, who will all help care for the infant, a social practice called allomothering.

Zoo Knoxville is part of the Silvered Leaf Langur Species Survival Plan, (SSP), which is a collaborative national conservation program in U.S. zoos accredited by The Association of Zoos and Aquariums. Slivered leaf langurs are threatened in their native range in Borneo and Sumatra, and the southwestern Malay peninsula. Their habitat is being destroyed by logging and the development of palm oil plantations. The species is also threatened by hunting and the illegal pet trade. One of the best ways to support conservation of langurs and other animals impacted by palm oil farming is to purchase products made with sustainable palm oil. Download the “Sustainable Palm Oil Shopping” app created by Cheyenne Mountain Zoo in Google Play or Apple App Store to check if the product you are about to purchase is “langur friendly”.

Zoo Knoxville welcomes three Roti Island snake- necked turtles that hatched in mid April. This critically endangered turtle is endemic to Indonesia. Since the mid-1990s, the population in the wild have suffered disastrous declines of more than 90% and are now ecologically extinct.