Hoo Do We Have Here, A Baby Owl Monkey?

These primates, native to South America,have been in the care of Budapest Zoo since the early 1990s.

They’re so comfortable in their environment they delight guests with new babies almost every year.

Born in March, this year’s little one is still being taken care of by its parents.

The infant, whose sex is still unknown, not only snuggles up to its mom, but also often lets the other team members carry it around.

This birth brings the total number of owl monkeys at the Budapest Zoo to 5.

A Cute Little Tapir Is The Latest Addition To Budapest Zoo!

The striped little calf was born on Monday, June 28th.

While, typically, newborns may not be seen by the general public in the first days, the mother and the little one are expected to be released from the "maternity room" to the enclosure earlier, so with a little luck, visitors can admire them.

What’s more, the South America exhibit, home to The Zoo’s tapirs, is also broadcasted on the Budapest Zoo’s website via webcam.

The zoo’s tapir family, together with the little one just born, consists of a total of four animals.

was born on the 20th of February last year.

Budapest Zoo has a holiday treat for its friends and fans: the first short film of the giant otter pups born there this fall. The little giants are a real rarity, as this endangered species is kept and bred in very few zoos. In Hungary, they can be only found in Budapest Zoo. The pups were born on October 7th, so the two little ones are now two months old. Although Budapest can only present them in a short film at the moment - as The Zoo is temporarily closed due to the coronavirus pandemic - they are confident that the general public will soon be able to admire them in person!

Naked Mole Rat Pups Are a First on ZooBorns! 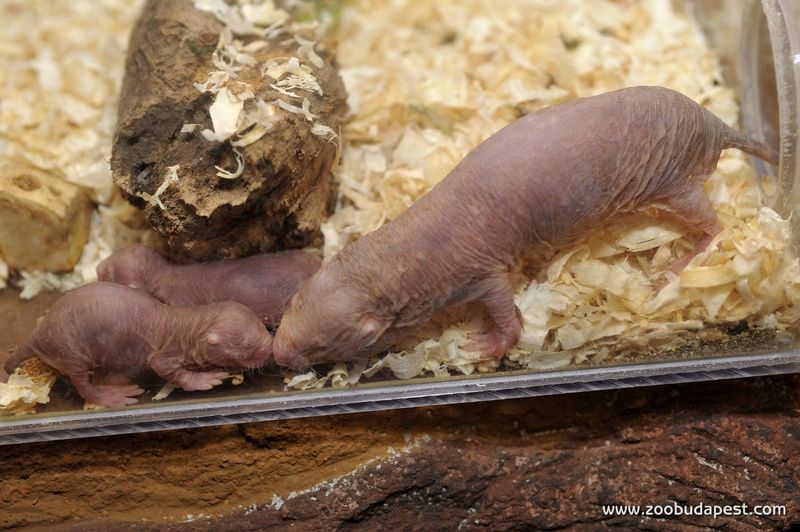 Here’s a first for the pages of ZooBorns:  A litter of Naked Mole Rats, born December 16 at Hungary’s Zoo Budapest. 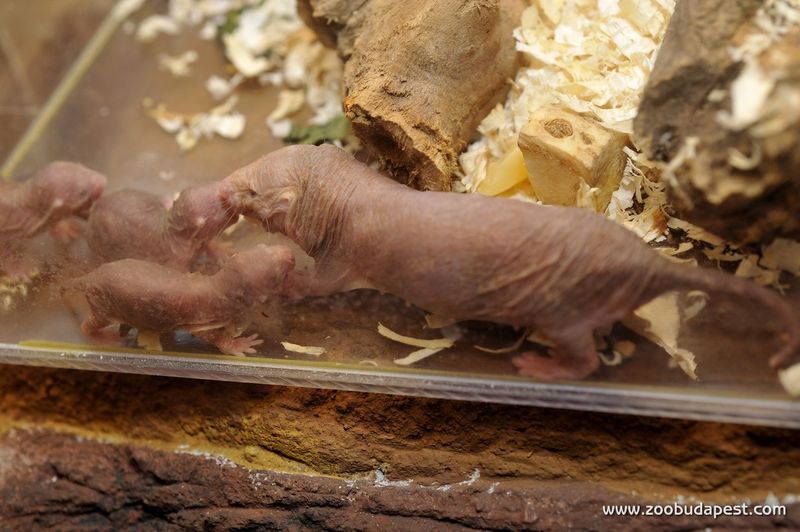 Nearly hairless and covered in wrinkly pink skin, Naked Mole Rats are one of only two mammal species known to be eusocial – they live in highly organized societies similar to those of ants, termites, or bees.  The only female in a colony to reproduce is known as the queen, and only a few males breed with her.  The rest of the colony assumes roles as workers.  They obtain food and maintain the complex system of underground tunnels in which the Naked Mole Rats live.

Native to eastern Africa, Naked Mole Rats feed underground on roots and tubers. A single tuber can sustain a colony for months.  Scientists are studying these unique animals because they appear resistant to cancer, live extraordinarily long for a mammal their size – upwards of 30 years – and seem to repress aging. Recent discoveries of natural sugars and proteins produced by Naked Mole Rats, which could aid in human disease research, resulted in the Naked Mole Rat being named “Vertebrate of the Year” by the journal Science in 2013. 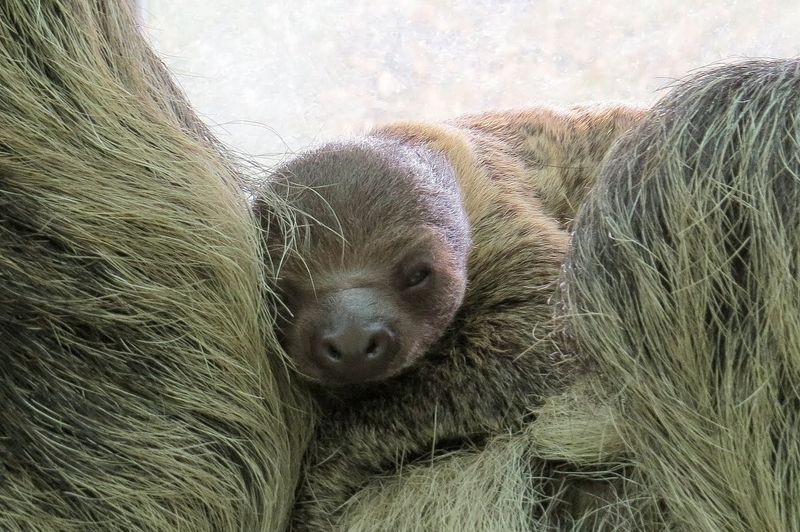 On September 21, a Sloth was born at Zoo Budapest to first-time mom, Lili. The Sloth baby, a healthy male, has been given the respectable name Zippo. He lives in a community of six Sloths, including his maternal grandmother Banya and his father, who was traded in from another zoo in order to prevent inbreeding. Lucky visitors to the zoo may be able to catch a glimpse of the baby clinging to his mother in the New World tropical exhibit.

Sloths take their time with everything, and their reproductive cycle is no exception. They have an especially long gestation period lasting 44 to 50 weeks. After a year or so of pregnancy, the mother will spend six to nine months caring for her baby. They also take a long time to reach sexual maturity, only reproducing for the first time  between 3.5 and 5 years of age. Because it takes so much time and work to successfully raise offspring, it's a good thing that these creatures can live up to 40 years. 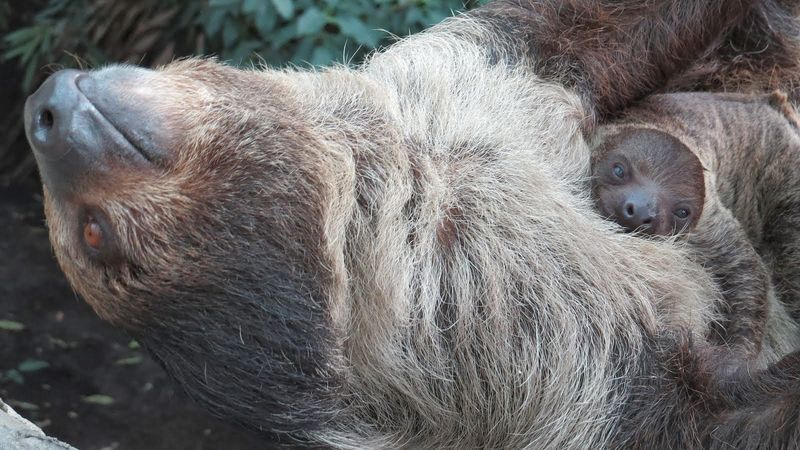 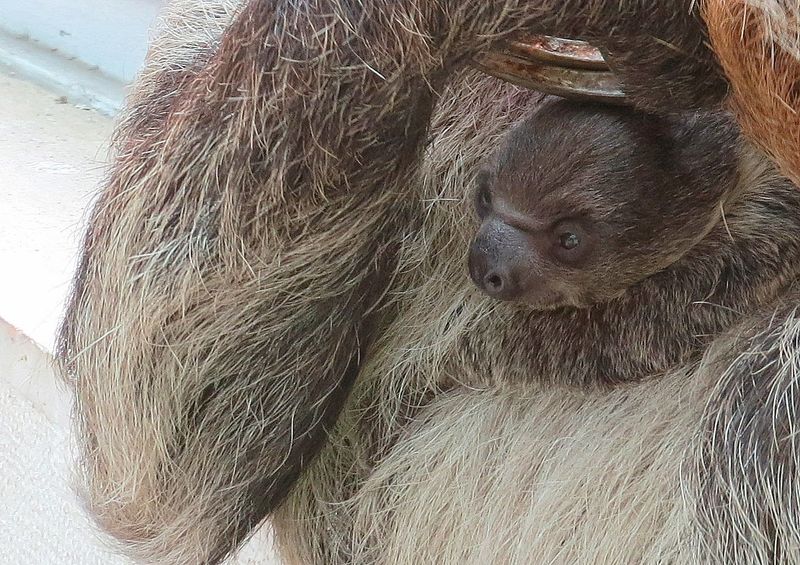 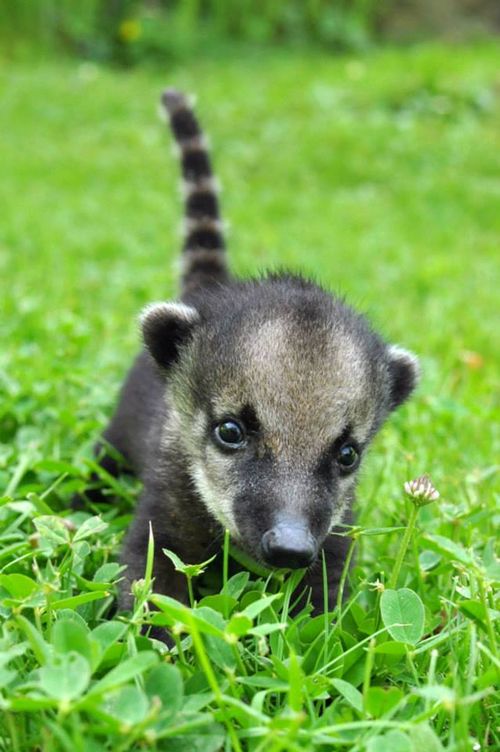 An elderly South American Coati unexpectedly gave birth to two healthy pups at Zoo Budapest. In the wild, Coatis rarely live longer than seven to eight years, but they have been known to live up to 17 years in captivity. The mother of these two pups, Juliet, is 15 years old. The Zoo's press release notes that "it is almost a matter of biological peculiarity" that she has successfully given birth to two healthy pups at her advanced age. At four years old, the pups' sire has only been sexually mature for about half a year, making the parents quite the unlikely pair!

Zoo staff were concerned that the elderly mother would not be able to raise both pups on her own, so one pup is staying with mom while the other is being hand-raised by human caregivers. As an adult, the hand-raised pup will be used for educational programs at the zoo. The pups are now about three weeks old. 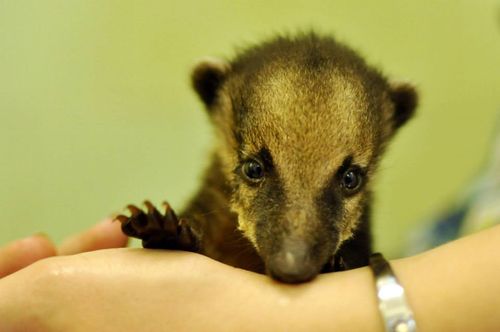 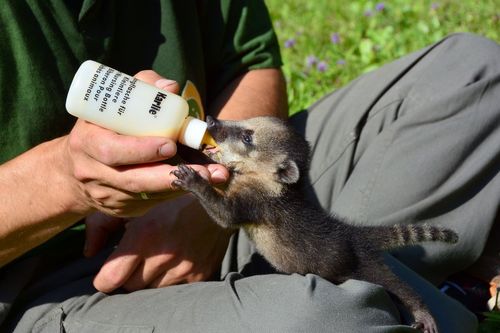 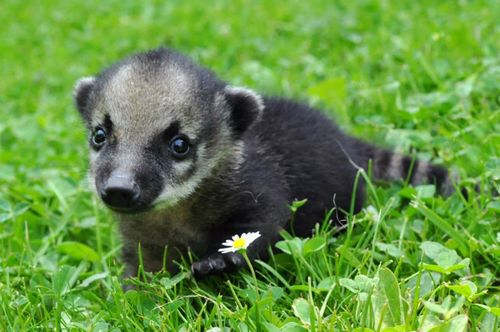 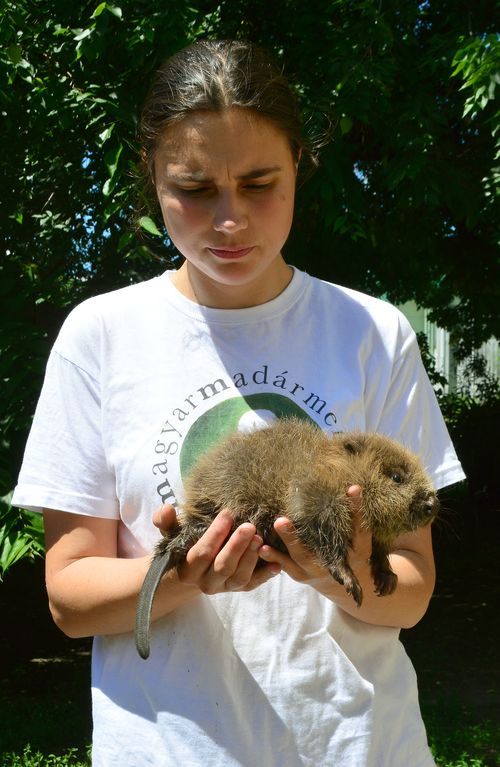 There's a beaver pup behind the scenes at Zoo Budapest—but this little girl wasn't actually born at the zoo. She was rescued from the Rába River on June 8 during a huge flood of the Danube River system. Although she was old enough to be able to swim, she was too small to survive the strong current of the flooded river. She is in excellent condition after her rescue, and once she is a bit older, stronger, and more self-sufficient, she will be released back at the Rába River, her original environment. For now, she is well cared for by the zoo's dedicated rescue staff and by her foster mom, a snuggly plushie toy. 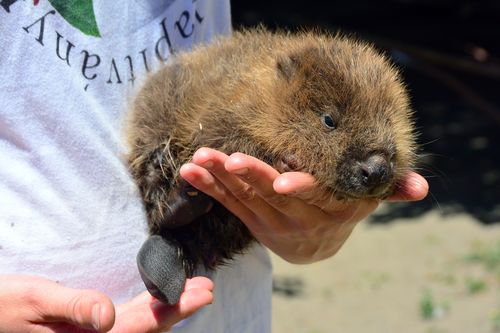 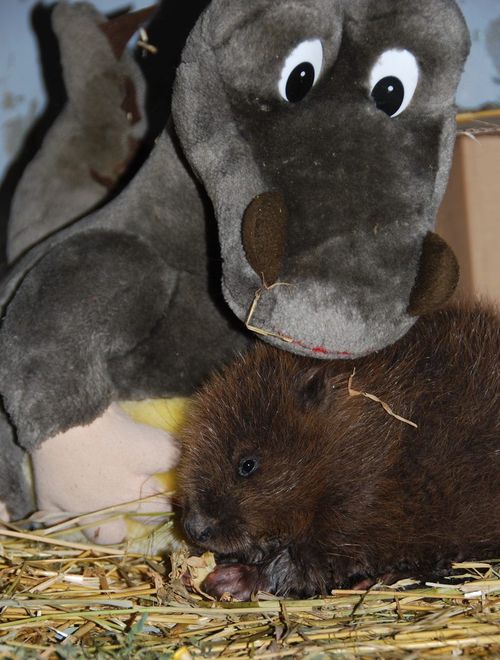 Each year, staff at Zoo Budapest rescue more than 1,500 wild animals native to Hungary, including many protected birds, small mammals, and reptiles. The European or Eurasian Beaver is listed by the International Union for Conservation of Nature (IUCN) as a species of Least Concern. However, their current stability is due to active conservation programs. Historically, European Beavers have been heavily exploited throughout Eurasia for their dense fur and for castoreum, a scent-gland secretion used for perfumes and also for artificial food flavorings. Loss of wetland habitats also contributed to their decline. Thanks to conservation efforts, reintroduced populations are successfully expanding in areas where beavers were once locally extinct. Unfortunately, their numbers are dwindling in Asia, where, according to the IUCN, conservation action is desperately needed.