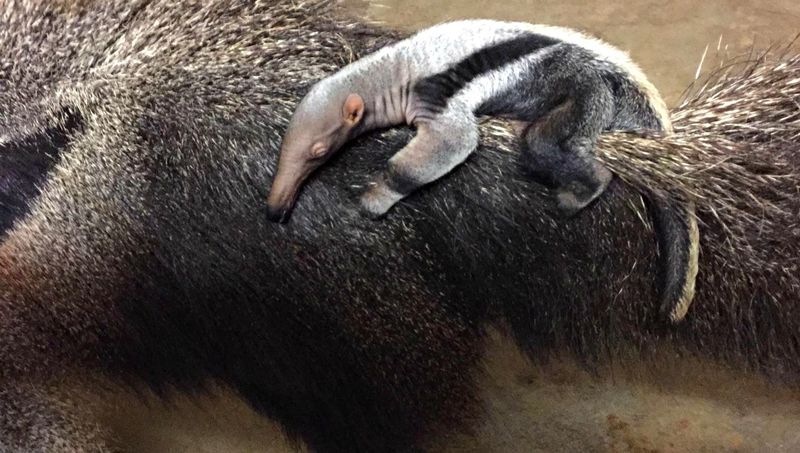 Zoo Boise is happy to announce the birth of a Giant Anteater pup.  The baby was born July 6 and is now starting to venture outside with its mother, Gloria.  After a few weeks of privacy inside their barn, the two anteaters are starting to explore their outdoor exhibit for short periods of time and may be viewable to zoo visitors. 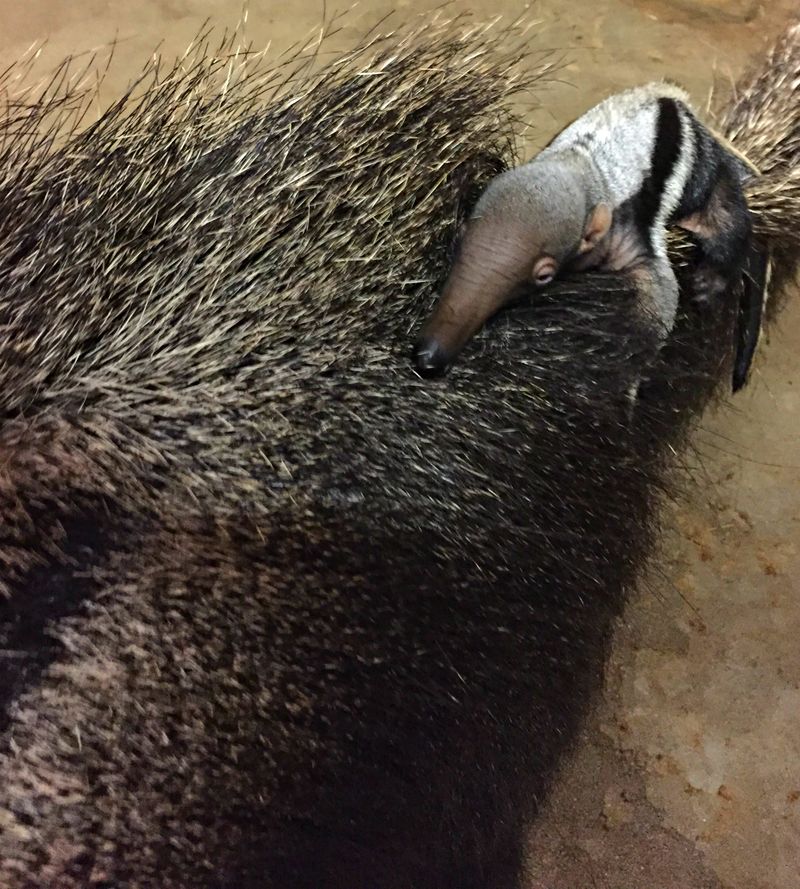 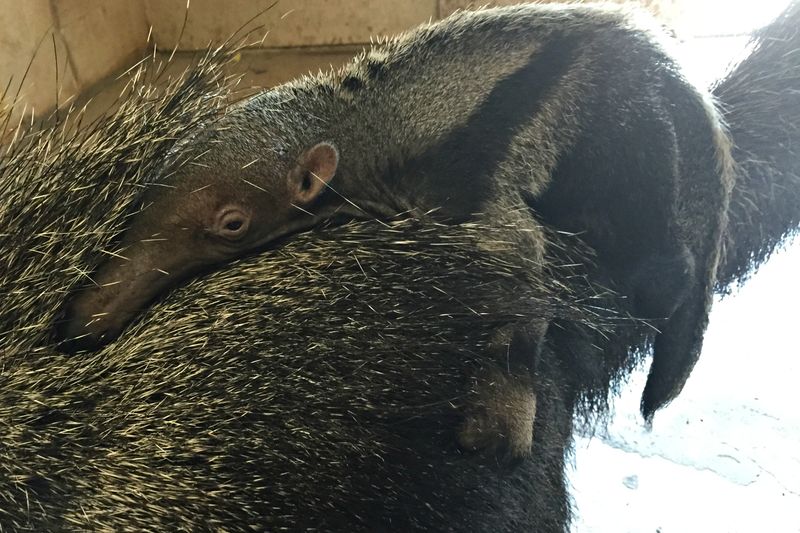 With the exception of mothers with offspring, anteaters are generally solitary animals.  Anteater Dad, McCauley, can be found in a separate exhibit next to Gloria and their pup. Keepers will verify the sex of the pup during its first veterinarian exam. After that, they will decide upon a name for the new anteater.

During their first year, giant anteater pups will spend much of their time riding on their mothers’ backs.  Born with a full coat of fur, the pup is able to blend in with its mother so that predators cannot easily see it.  The pup will stay with its mother until it is full-grown, between one and two years of age.

Also known as the Ant Bear, the Giant Anteater (Myrmecophaga tridactyla) is a large insectivorous mammal native to Central and South America. It is one of four living species of anteaters and is classified with sloths in the order Pilosa. The species is mostly terrestrial, in contrast to other living anteaters and sloths, which are arboreal or semi arboreal.

The Giant Anteater can be found in multiple habitats, including grassland and rainforest. It forages in open areas and rests in more forested habitats. It feeds primarily on ants and termites, using its fore claws to dig them up and its long, sticky tongue to collect them. They can eat up to 30,000 insects in one day! Though Giant Anteaters live in overlapping home ranges, they are mostly solitary. 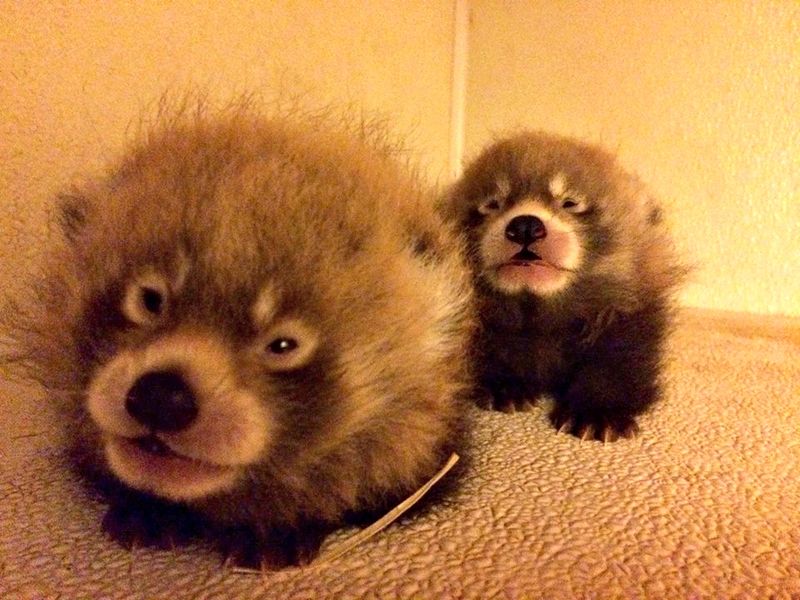 Twin Red Panda cubs born on June 18 at Zoo Boise made their media debut last week.  The cubs, a male and a female, are the fifth litter born to parents Dolly and Winston. 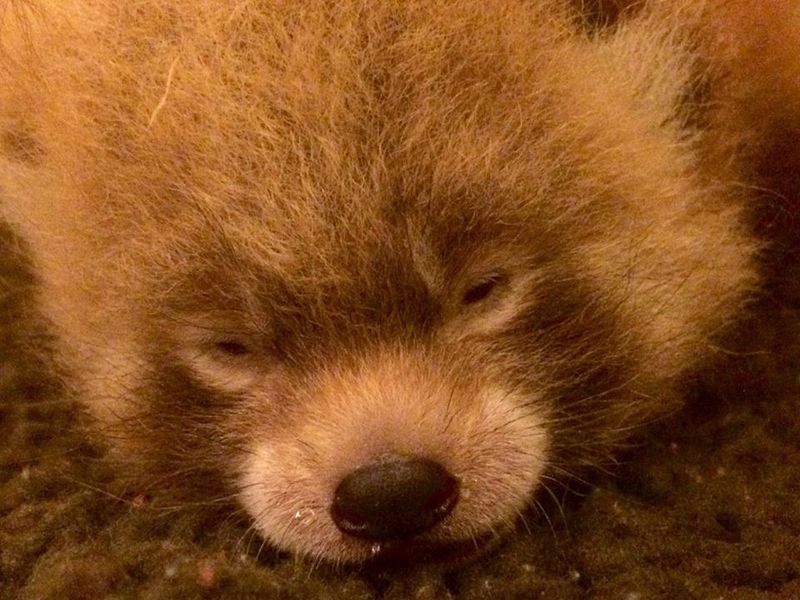 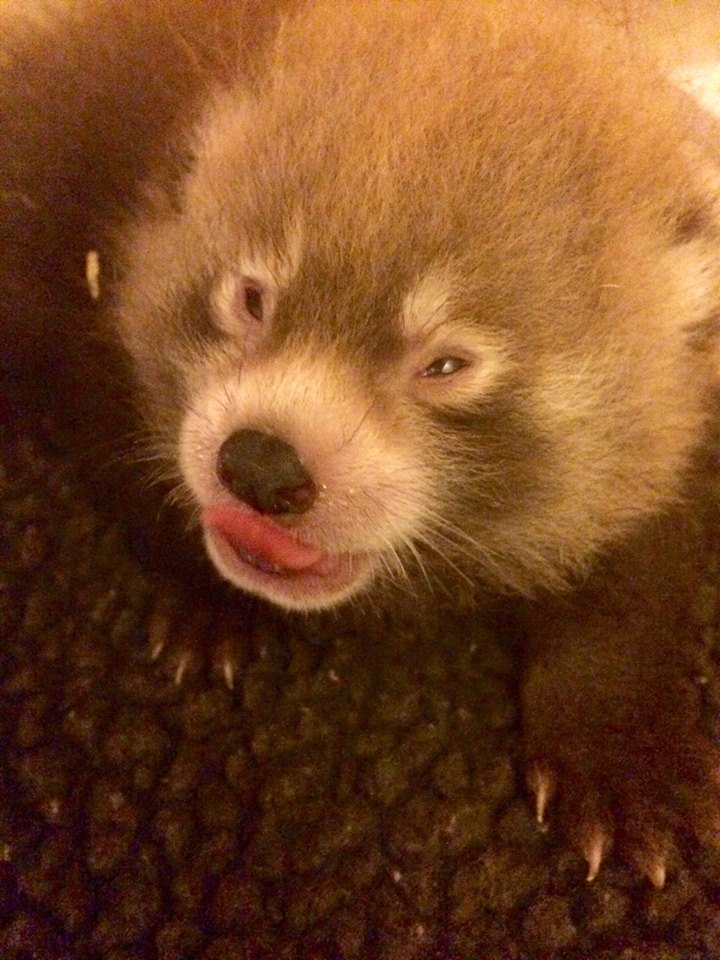 Just five weeks old, the cubs still spend most of their time in the den with Dolly, but will soon being to emerge for short periods of time.  The cubs have not yet been named.

Red Pandas typically breed only once per year, usually in January or February, and cubs are born in June or July.  The cubs remain with their mother in a hollow tree for several months before emerging to explore the forest.

Because their wild habitat is vanishing due to deforestation, Red Panda populations are in decline.  In some areas of their range, poaching is a significant threat.  Red Pandas are classified as Vulnerable by the International Union for Conservation of Nature.  Zoo breeding programs like the Species Survival Plan aim to maintain a high level of genetic diversity in zoo populations to help preserve this species for the future. 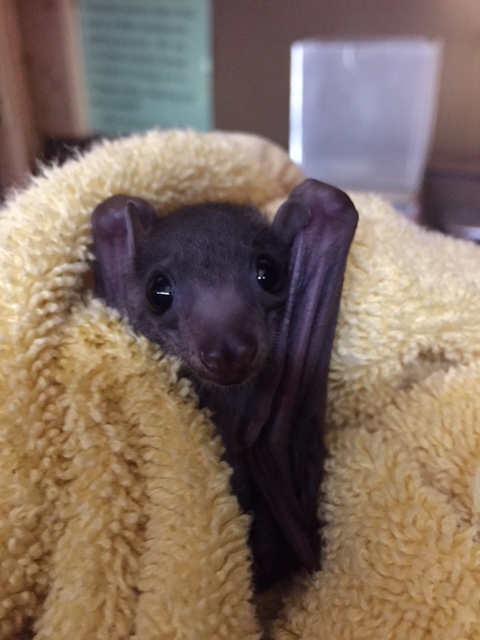 The two elusive boys are currently staying close to their mothers, which makes photography of the newborns a bit more challenging. 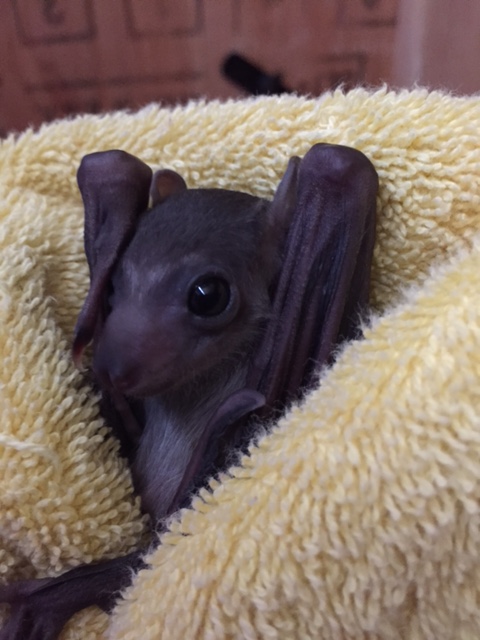 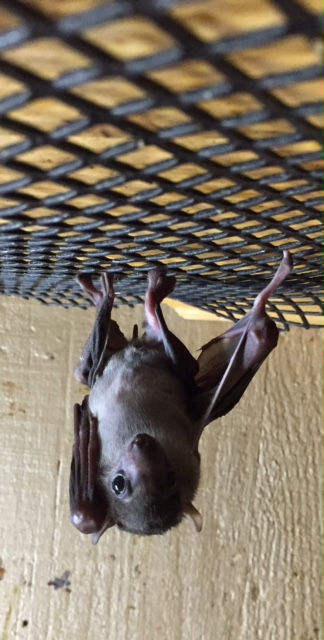 Ruwenzori Long-Haired Fruit Bats are important tree pollinators. For example, the baobab tree depends on bat pollination for survival. As the bat reaches into a flower to get nectar, pollen rubs onto their foreheads. This pollen is left on the next flower they visit.

Fruit Bats (or Megabats) constitute the suborder Megachiroptera, and its only family Pteropodidae of the order Chiroptera. They are native to Africa, Asia, Australia and the South Pacific, and are represented by 166 species. In North America, about twelve species of Megachiroptera are managed in Association of Zoos and Aquariums (AZA) institutions. These bats can be divided into three different groups, based on ability to echolocate and roosting behaviors: 1) megabats with audible echolocation; 2) megabats that cannot echolocate and roost in dense cover in small groups; and 3) megabats that cannot echolocate and roost in larger groups in tree canopies.

In North America, two species of Rousette Fruit Bats are commonly housed in zoological collections: the Egyptian Fruit Bat (Rousettus aegyptiacus) and the Ruwenzori Long-Haired Fruit Bat (Rousettus lanosus). These fruit bats are nocturnal and feed predominately on fruit, flower resources and leaves. In captivity, Rousette Fruit Bats will also consume mealworms (Tenebrio molitor). In the wild, Rousette Fruit Bats roost in large crowded colonies, in caves. These cave-dwelling bats have a rudimentary echolocation system, based on audible tongue clicking for navigation. When feeding, these bats rely on vision and sense of smell for locating food resources.

The Ruwenzori Long-Haired Fruit Bat is currently classified as “Least Concern” on the IUCN Red List of Threatened Species. 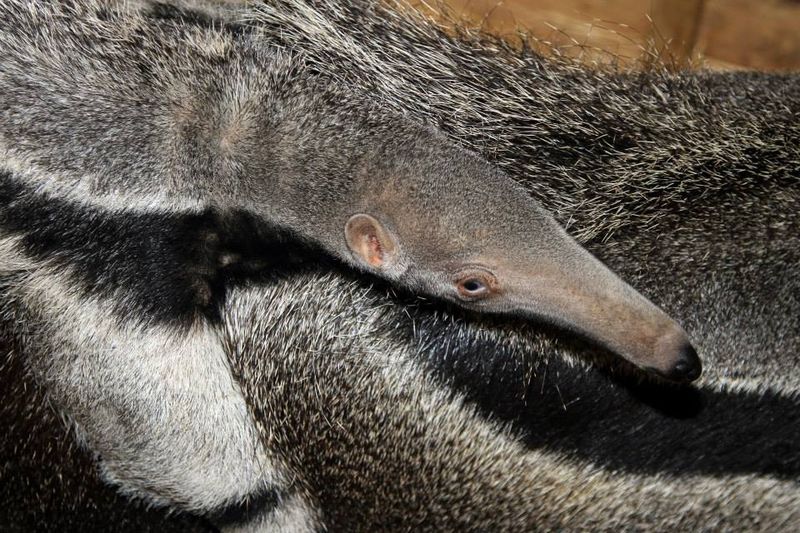 Zoo Boise announced the December 8 birth of a Giant Anteater pup.  The female pup is now starting to explore the outdoors with her mother, Gloria. Because Giant Anteaters are native to warmer climates, mother and pup have spent the last few months in their heated barn. The pup will stay with her mother until she is full grown at about two years old. 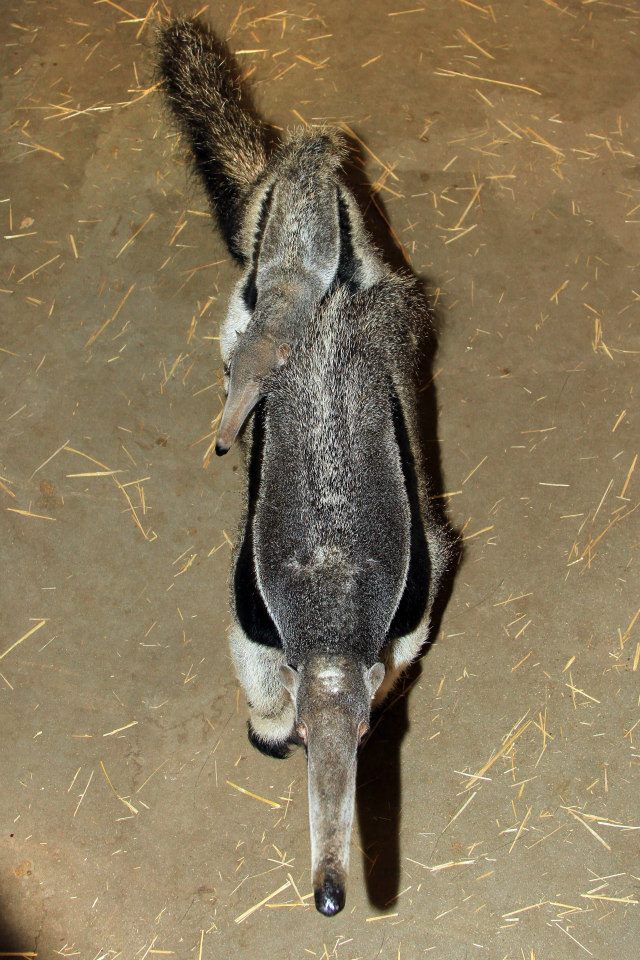 During their first year of life, Giant Anteater pups will spend much of their time riding on their mothers’ backs. Born with full coats of fur, the pups are able to blend in with their mothers’ coats to avoid predation.

Giant Anteaters are native to Central and South America.  They have no teeth, but use their long, sticky tongues to gather insects – often ants – by the thousands.  Giant Anteaters are listed as Vulnerable by the International Union for Conservation of Nature. 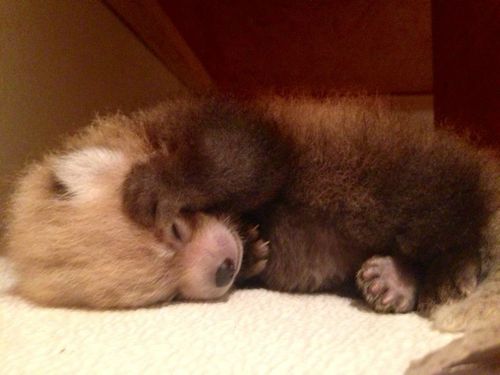 There's a new Red Panda cub at Zoo Boise. This little male was born on June 15 to first-time parents Dolly and Winston. He has spent all his time in an off-exhibit den with his mother, who has done an excellent job of caring for him. He snoozes a lot, like most newborns do, while he develops more each day. He will grow to be the size of a house cat, though his tail will become big and bushy and add up to an additional 18 inches (46 cm) in length to his body.

Soon he will make his way out to explore the exhibit for short stints, when visitors can hope to catch a glimpse of him. He is the third Red Panda to be born at the zoo, and the newest addition to the zoo's most "reproductive" year ever. Red Pandas live in the mountains of Nepal and northern Myanmar (Burma), as well as in central China. They forage most actively at dusk and in the evening, and spend most of their time in the trees, even when they nap. 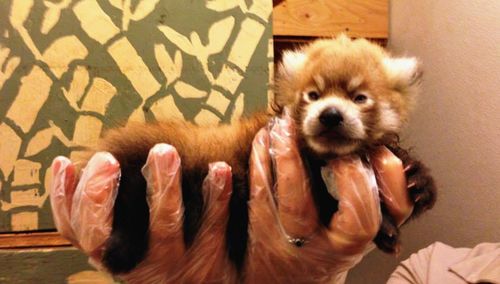 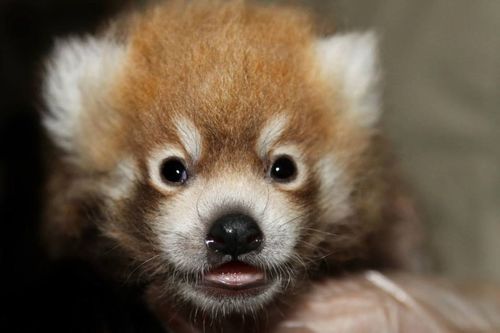 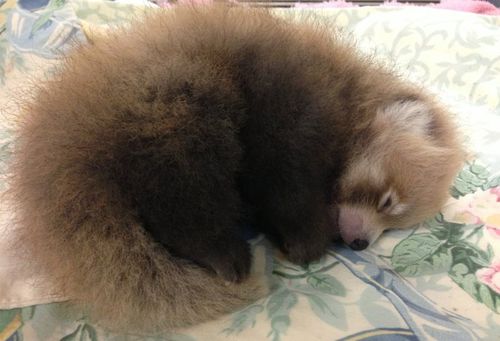 Parents Dolly and Winston are part of the Red Panda Species Survival Program, a breeding program for certain Endangered or Threatened species that helps maintain a genetically diverse, strong animal population within zoos. 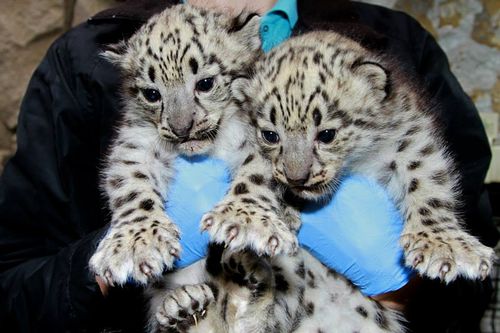 Two baby Snow Leopards born at Zoo Boise have an important job in a national conservation program. The cubs, a male and a female, were born May 23 to parents Kabita and Tashi, and are the first Snow Leopards ever born at the zoo. 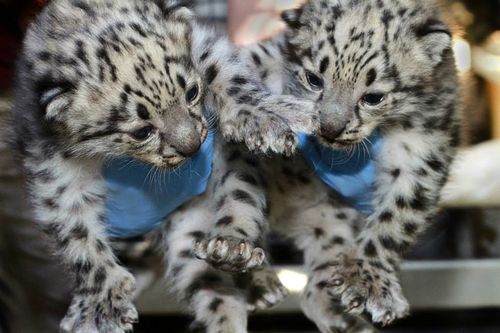 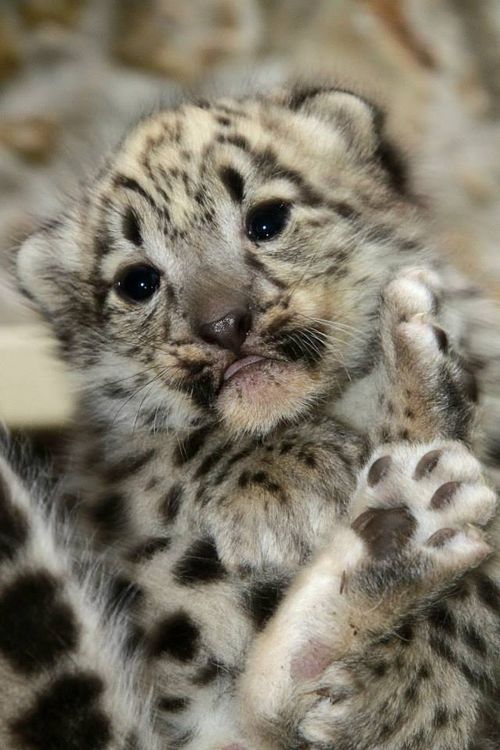 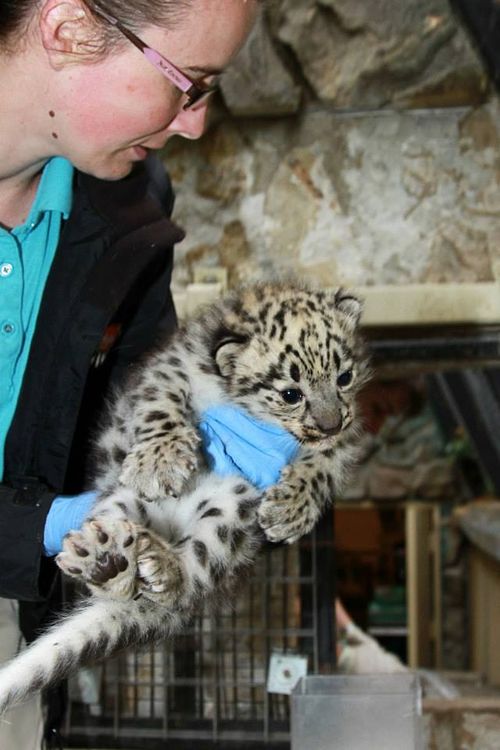 Like their wild counterparts, the cubs are spending their first few weeks in a den with their mother. As they grow and develop, they will emerge from the den to explore their exhibit for short periods of time.

As a first-time mother, Kabita is doing a fantastic job of caring for the cubs. Zoo staff members have been giving Kabita as much privacy as possible to ensure that she does not become stressed and continues to take excellent care of the cubs.

The birth of these cubs is a significant achievement for Zoo Boise and for Snow Leopard conservation. Tashi and Kabita were paired as part of the Snow Leopard Species Survival Plan (SSP). The SSP is one of the Association of Zoos and Aquariums’ many conservation programs. The SSP's goal is to maintain a healthy and genetically diverse population and to protect wild habitats for the species. Snow Leopards are Endangered in their Central Asian mountain habitat.

What's Black and White and Cute All Over? 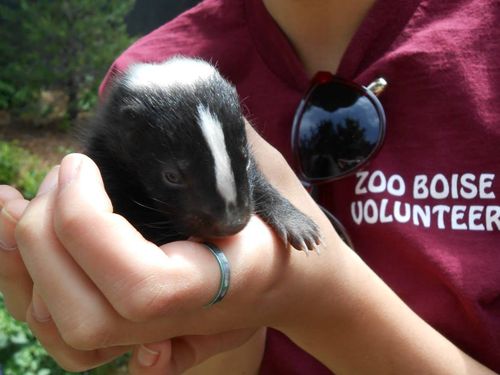 At Zoo Boise, Striped Skunks Figaro and Cleo are stars of the zoo's special animal presentations. On April 30th, the pair also became the parents of six little kits. The four males and two females just recently started to open their eyes. Once mature and independent, they will move to other zoos. In the meantime, the kits may join their parents in animal presentations at the zoo, depending on their mother and on their healthy development. 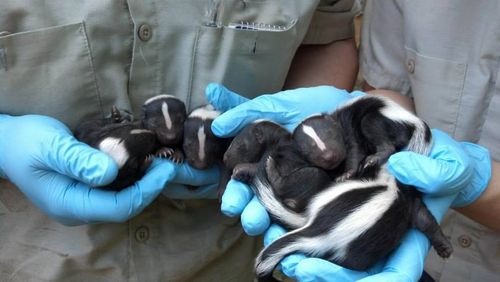 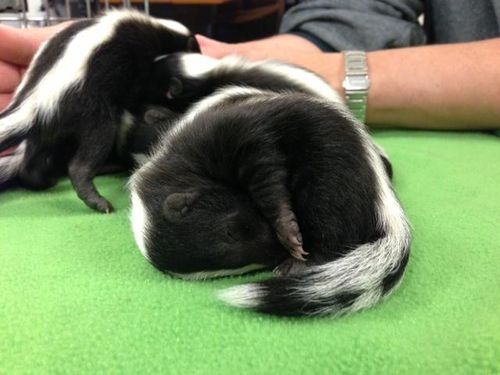 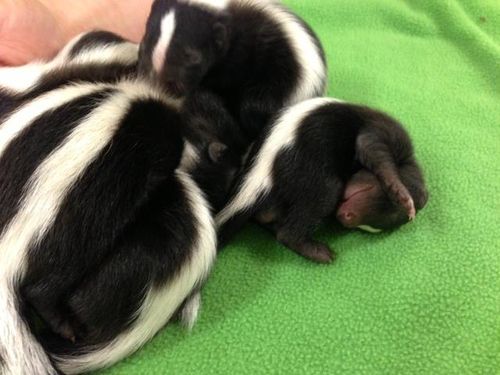 Continue reading "What's Black and White and Cute All Over?" » 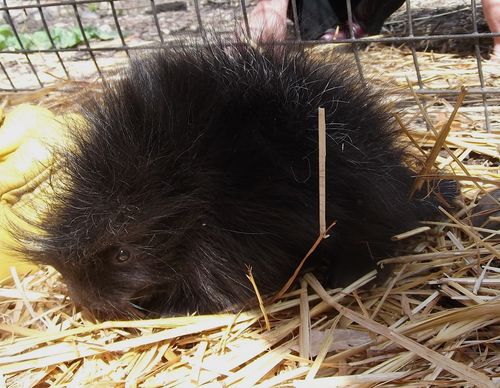 Zeus and Athena, a pair of North American Porcupines at Zoo Boise, had a porcupette on April 8th. The male baby hasn't been named yet. He is doing very well under the care of his mother Athena, and is on exhibit at the zoo. He weighed 517 grams at birth, and had gained 300 grams by his checkup just two weeks later.

The little male is the second porcupette to be born at Zoo Boise: in July 2012, Olympus ("Oly") was born to the same pair. Mostly arboreal, Athena spends most of her day sleeping in the trees while her baby stays on the ground. She comes down to care for him and to sleep near him at night. Within a few weeks, the porcupette will begin to eat vegetation and will learn to climb trees with her. 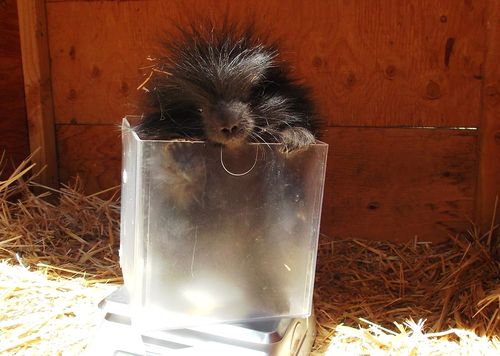 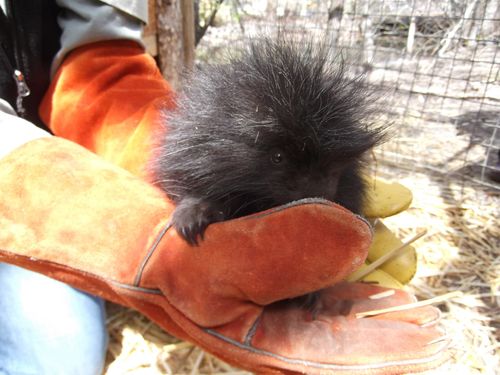 Porcupettes are born with open eyes and soft quills which harden within thirty minutes after birth.  Contrary to popular belief, porcupines do no shoot or throw their quills as a defense.  When attacked, a porcupine will tuck its head between its front paws and turn so their quills face the attacker. The hollow air-filled quills fall out of the porcupine’s skin easily.  One North American porcupine can have as many as 30,000 quills.