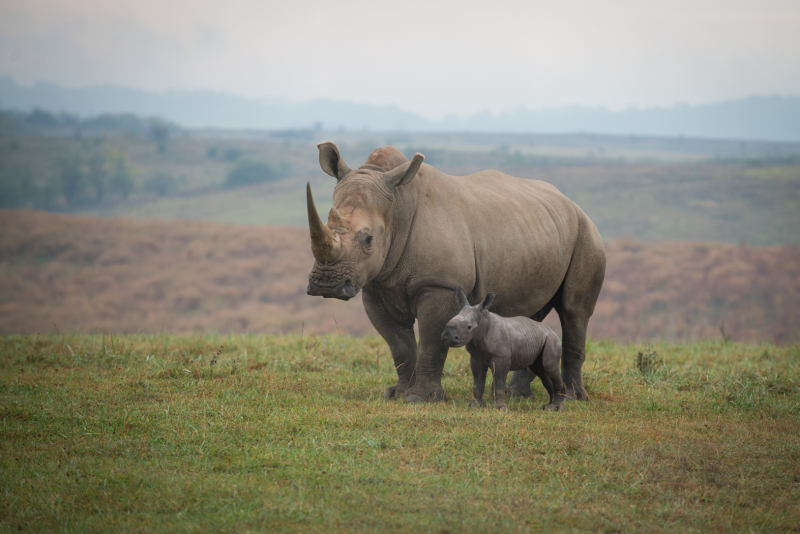 The new calf was born to second-time mother, Anan, and first-time father, Roscoe. Anan’s first calf, a male named Letterman (born at The Wilds in 2014), was the first fifth-generation White Rhino to be born outside of Africa.

Anan had a notable birth herself, as she was the first fourth-generation Rhino to be born outside of Africa, and she, too, was born at The Wilds. Anan’s mother, Zen, was the very first Rhino born at The Wilds in 2004 and is still a part of the conservation center’s breeding herd.

The Wilds animal management team members have observed that the new calf is strong and is nursing in the pasture. This is the 17th White Rhino born at The Wilds; the conservation center has also produced seven Asian One-horned Rhinos. 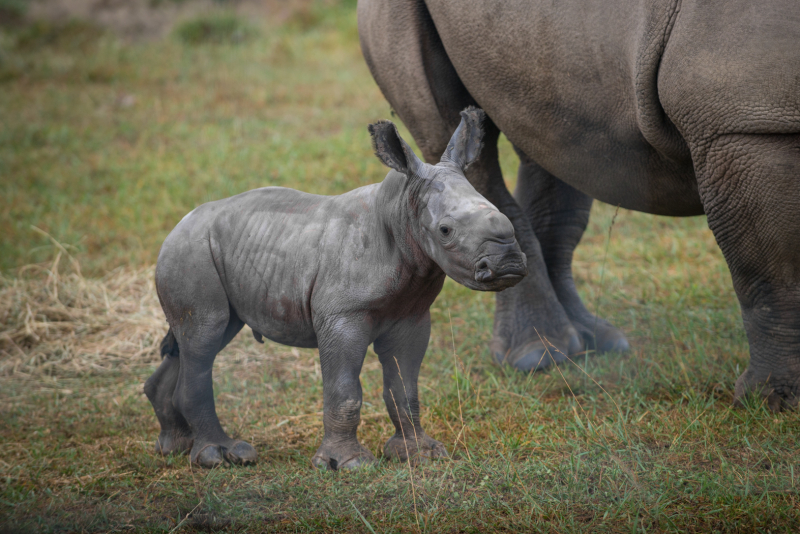 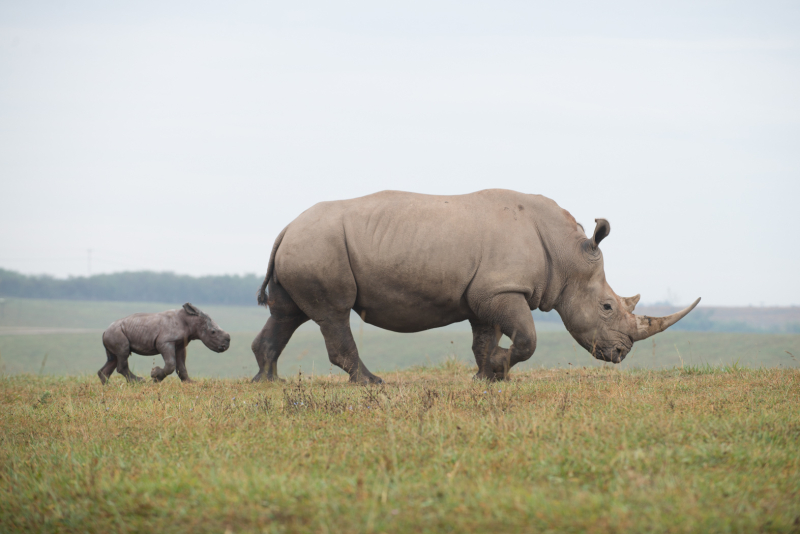 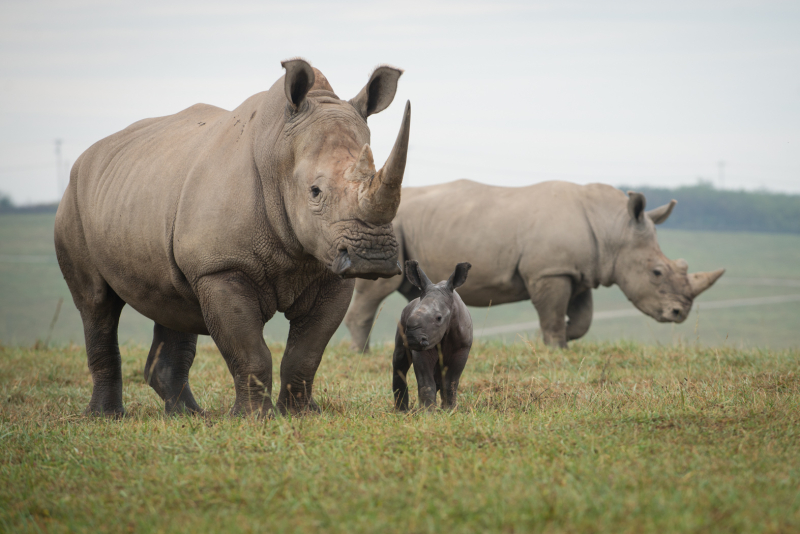 The breeding recommendations are part of the Association of Zoos and Aquariums’ (AZA) Species Survival Plan® (SSP) to enhance conservation of these species in their native range and to maintain a sustainable population of rhinos in human care.

“Every birth at The Wilds is significant, but this one is particularly special to us. With each new generation of Rhinos born, it is a testament to the success of the breeding program at The Wilds but more importantly a success for this species as a whole. The Wilds is proud to be a part of the conservation initiatives ensuring the survival of this species,” said Dr. Jan Ramer, vice president of The Wilds.

The White Rhino population had dwindled to perhaps only 50-200 at the beginning of the 20th century, but through conservation efforts, the population of White Rhinos in their native African range has rebounded to about 20,400 animals. However, even with the increase in numbers, the species remains classified as “Near Threatened” by the International Union for Conservation of Nature (IUCN). All five remaining Rhino species in Africa and Asia (White Rhinoceros, Black Rhinoceros, Greater One-horned Rhinoceros, Javan Rhinoceros, and Sumatran Rhinoceros) are persecuted by poachers who sell the horns for ornamental or traditional medicinal purposes, even though there are no scientifically proven health benefits for its use. The horns are made of keratin—the same substance that makes up fingernails and hair. The International Rhino Foundation, which receives support from The Wilds, estimates that one Rhino is killed every eight hours for its horn.

A Cheetah and His Dog 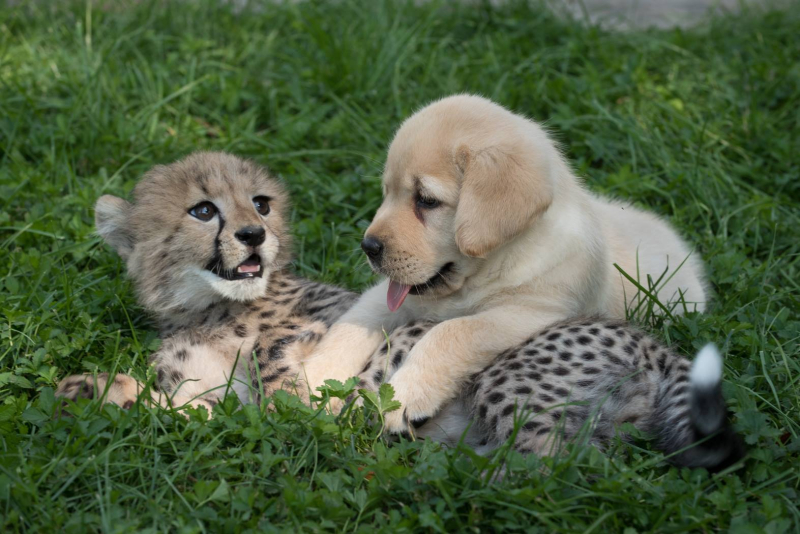 Emmett was born at the Wilds in Cumberland, Ohio. Due to a bout of pneumonia, he was hand-reared, for several weeks, while receiving treatments. After his recovery, he was moved to the Columbus Zoo and Aquarium.

Emmett picked Cullen to be his companion dog, and the two have become quite the pair! Cullen will help Emmett to be more confident and calm. Emmett will soon begin his travels with Jungle Jack Hanna’s team and be an ambassador for his cousins in the wild. Cullen will be with him every step of the way! 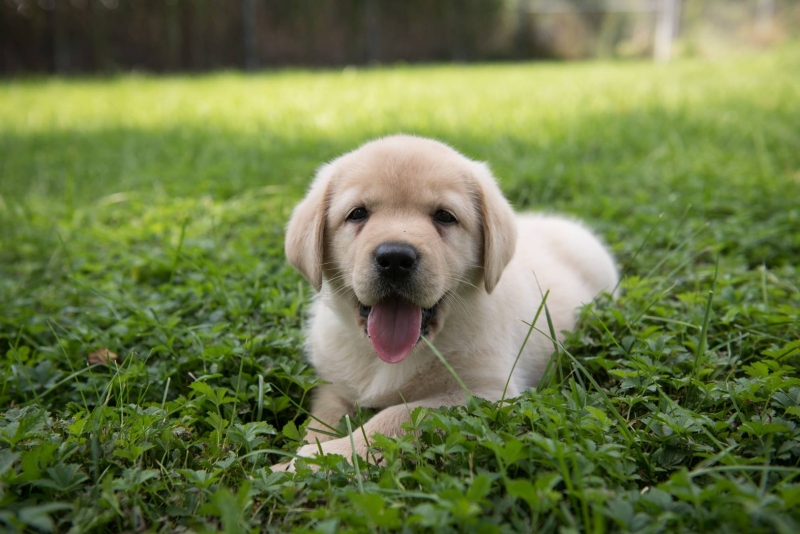 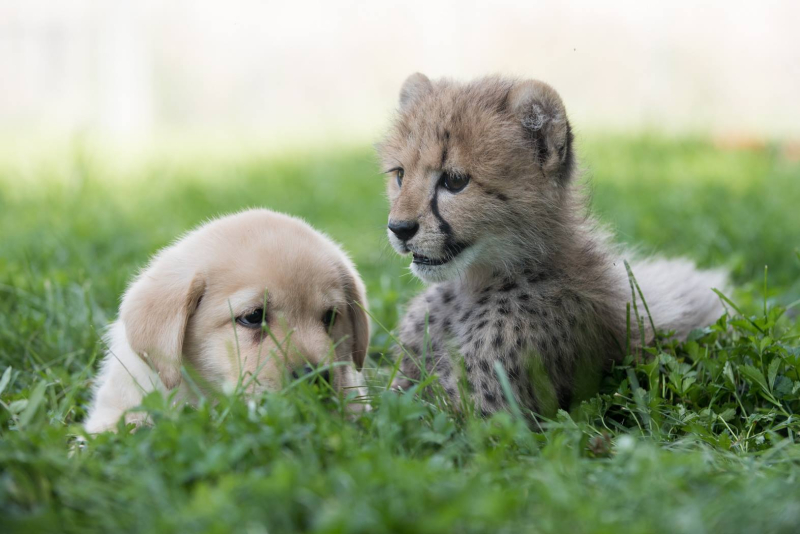 The Cheetah (Acinonyx jubatus) is a big cat that is native to eastern and southern Africa and a few parts of Iran.

The Cheetah is characterized by a slender body, deep chest, spotted coat, a small rounded head, black tear-like streaks on the face, long thin legs and a long spotted tail. It reaches nearly 70 to 90 cm (28 to 35 in) at the shoulder, and weighs 21–72 kg (46–159 lb). Though taller than the leopard, it is notably smaller than the lion.

Cheetahs are active mainly during the day, with hunting its major activity. Adult males are sociable despite their territoriality, forming groups called "coalitions". Females are not territorial; they may be solitary or live with their offspring in home ranges. Cheetahs mainly prey upon antelopes and gazelles.

The speed of a hunting Cheetah averages 64 km/h (40 mph) during a sprint; the chase is interspersed with a few short bursts of speed, when the animal can clock 112 km/h (70 mph). Cheetahs are induced ovulators, breeding throughout the year. Gestation is nearly three months long, resulting in a litter of typically three to five cubs (the number can vary from one to eight). Weaning occurs at six months; siblings tend to stay together for some time. Cheetah cubs face higher mortality than most other mammals, especially in the Serengeti region. Cheetahs also inhabit a variety of habitats: dry forests, scrub forests and savannahs.

The Cheetah is classified as “Vulnerable” on the IUCN Red List. The species has suffered a substantial decline in its historic range due to rampant hunting in the 20th century. Several African countries have taken steps to improve the standards of conservation. 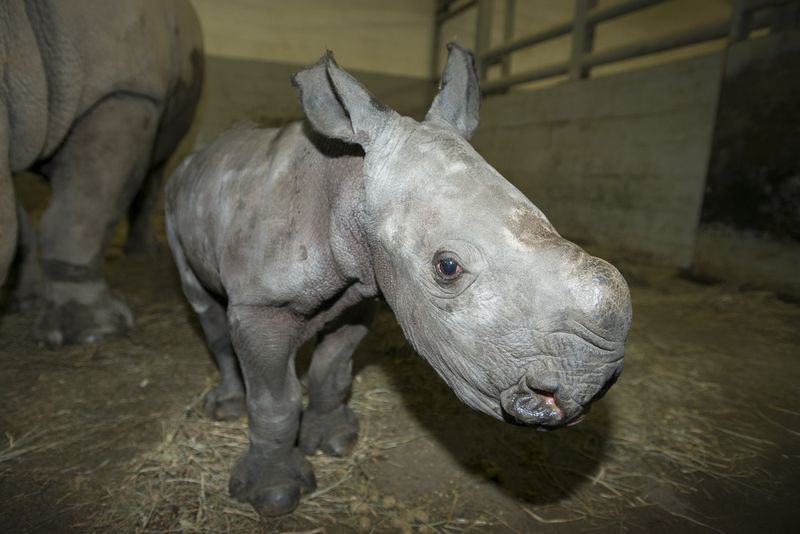 A male Southern White Rhino was born at the Wilds, in Ohio, on November 12th.  He is the first fifth-generation White Rhino, on record, to be born outside of Africa. 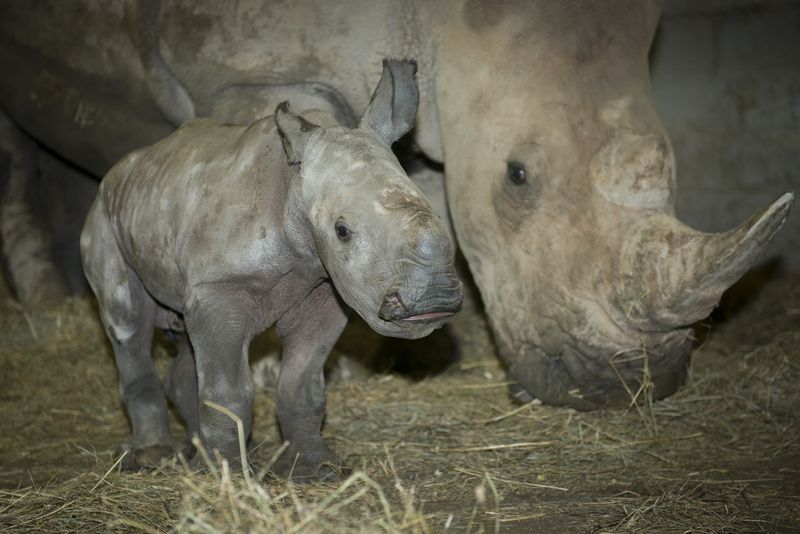 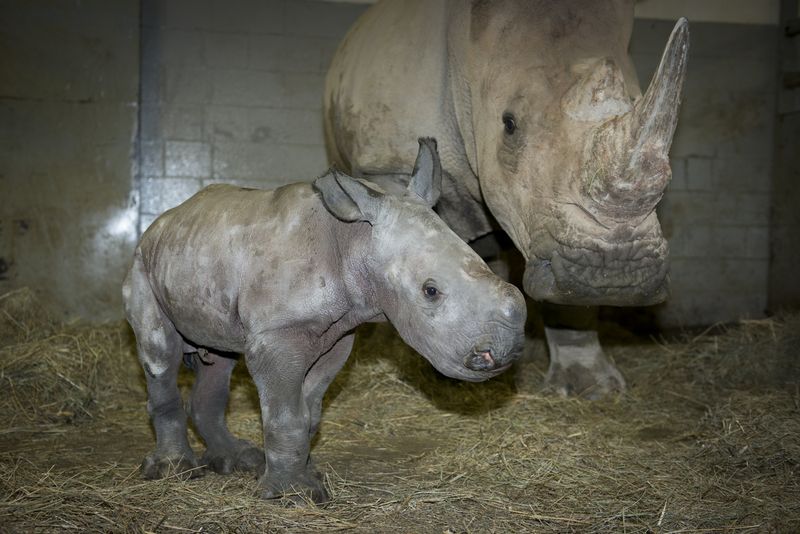 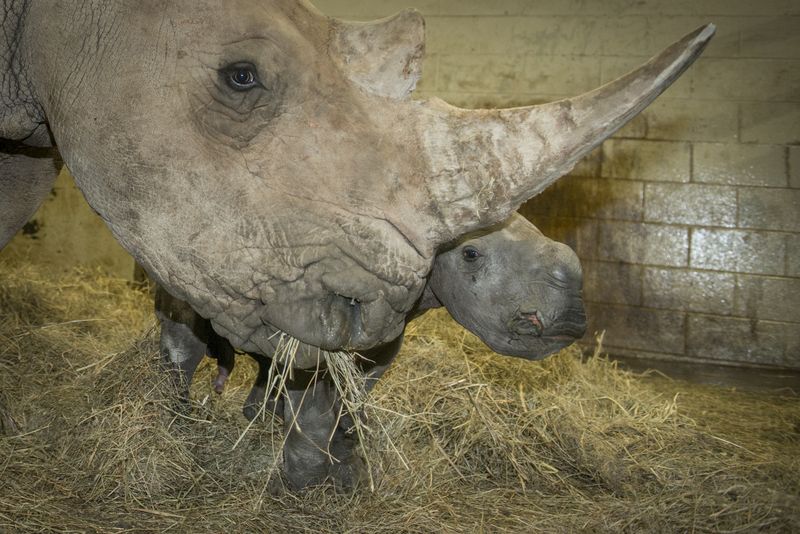 The Wilds, a 10,000-acre conservation center in Southeast Ohio, produced the first fourth-generation White Rhino outside of Africa in 2009, and remains the only facility to produce fourth-generation calves; seven have been born to date.

“The birth of fourth and now fifth-generation White Rhinos in human care is a remarkable achievement,” said President/CEO Tom Stalf. “We attribute this success to our expansive habitats and large herds that allow for natural social behavior, as well as the specialized care they receive from our dedicated team.”

This is the first calf for ‘Anan’, whose birth was also notable since she was the first fourth-generation rhino born at the Wilds. The calf’s father is ‘Fireball’, who was born in 2002 and arrived at the Wilds in 2008. Before leaving for another zoo in 2013, as part of the Species Survival Plan, Fireball sired ten calves while at the Wilds.

This is the 16th White Rhino born at the Wilds; the conservation center has also produced five Asian One-Horned Rhinos.

“The calf appears to be doing well, but the first few weeks are always a critical time for any newborn,” said Dan Beetem, Director of Animal Management. “They will spend the winter inside our Rhino Management Center and move into our open pastures in the spring.” 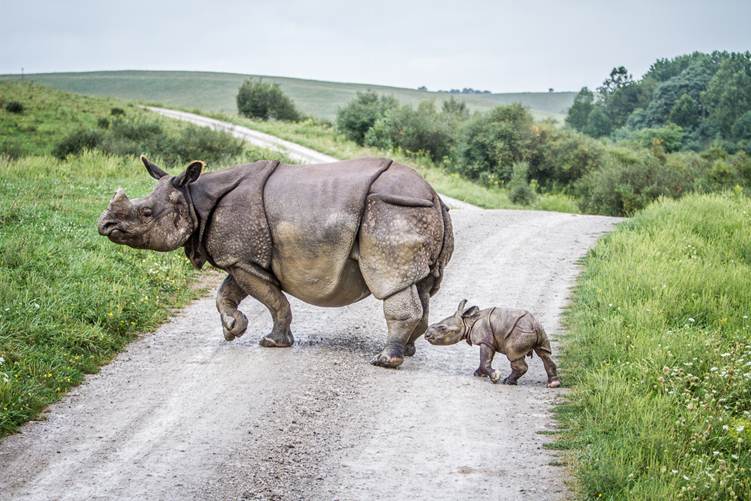 The Wilds, in Ohio, welcomed a Greater One-Horned Asian Rhinoceros, also known as an Indian rhino, on August 30th. The calf was born out in pasture with the rest of the herd and is the sixth One-Horned Rhino born at the Wilds. 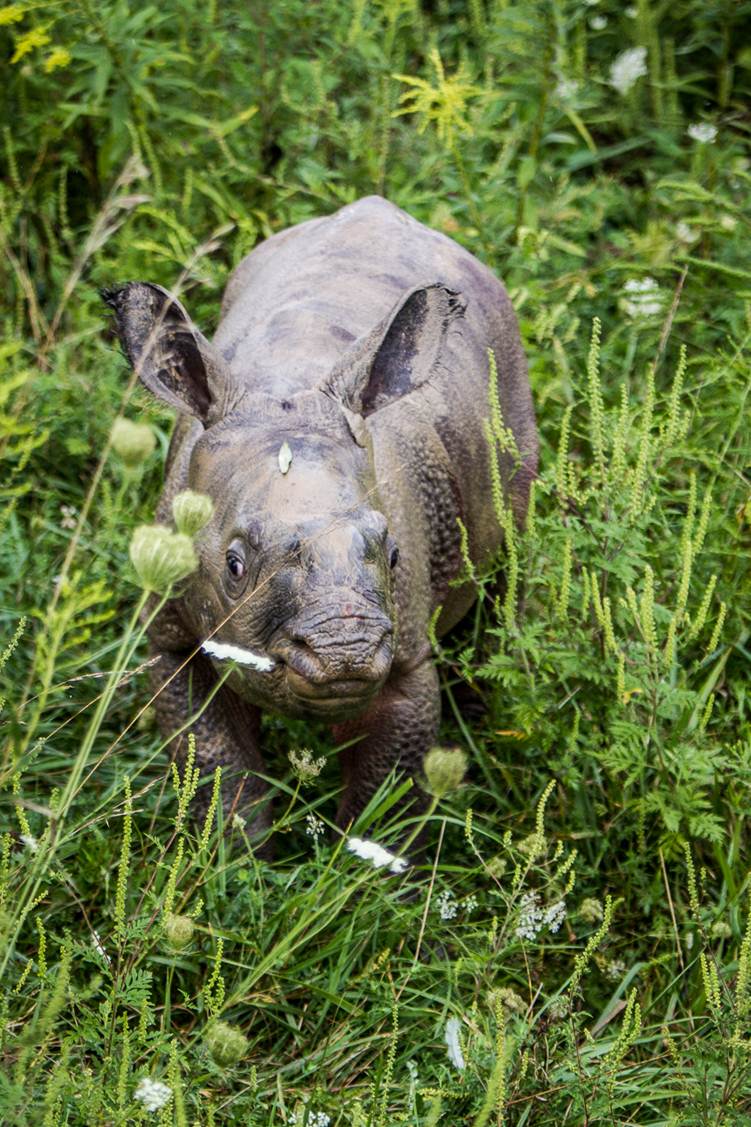 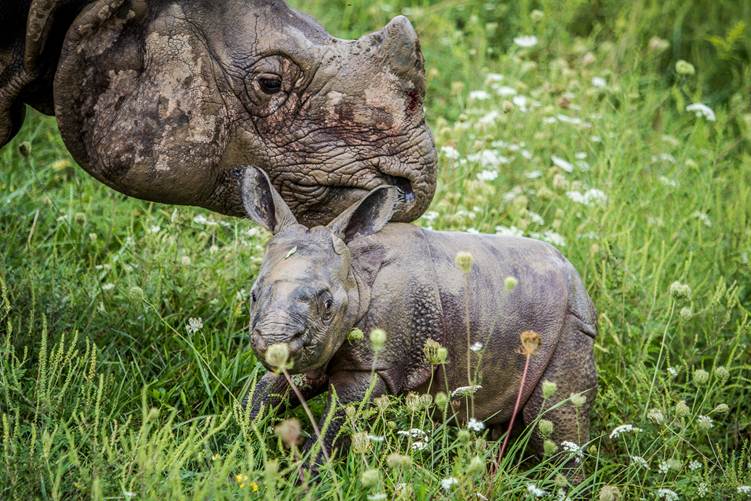 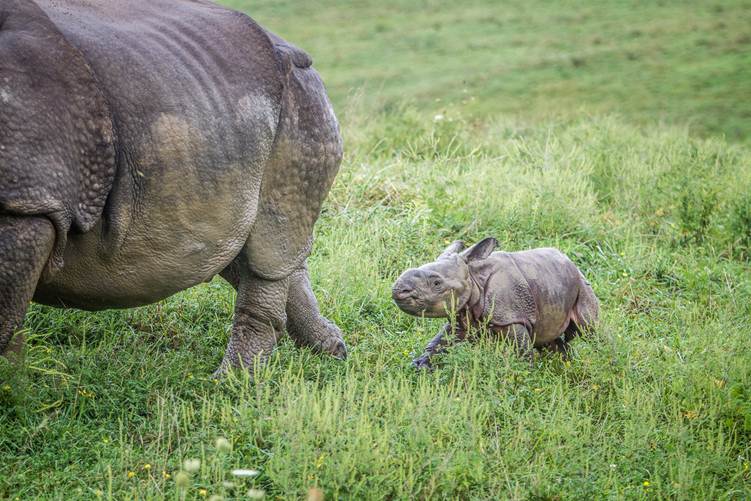 Dan Beetem, Director of Animal Management, said, “We had been watching the mother very closely over the past week. Her udder development and behavior told us the birth was imminent; however there are several good hiding places across 100 acres. The calf is doing well and already enjoys swimming in the lake with mom.”

The Greater One-Horned Rhino calf, whose sex has yet to be determined, marks the continued success of the One-Horned Rhino breeding program at the Wilds conservation center located in southeast Ohio.

The calf is the third for 15-year-old dam, Sanya, and the third for 11-year-old sire, Rustum.  Rustum came to the Wilds in 2007 as part of a group imported by the Zoological Society of San Diego to bring new genetics into the Association of Zoos and Aquariums (AZA) program.

Born after a gestation of nearly 16 months, One-Horned Rhinos can grow to be 4,800 pounds and six feet tall at the shoulder. Their range is the plains or woodlands of northern India, Bhutan and Nepal. 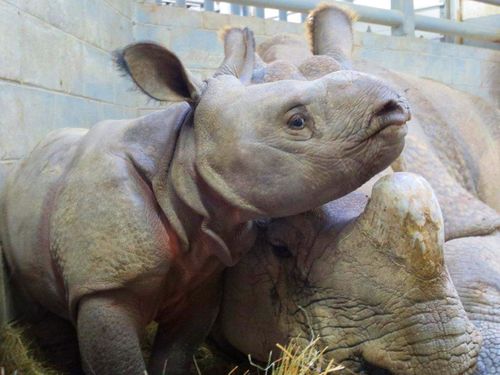 The Wilds conservation center welcomed two Rhinoceros calves this fall! Born within one month of one another, each young Rhino is actually a separate species. The Greater One-horned Rhinoceros (a.k.a. the Indian Rhino) was born Oct. 14, 2012 (pictured above and last), following shortly after the arrival of a Southern White Rhinoceros born Sept. 28, 2012 (pictured second). 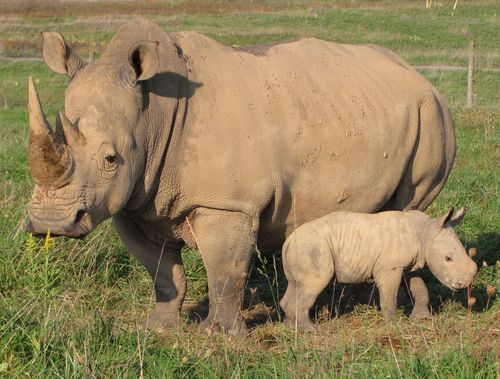 The fourth Greater One-horned Rhino born at the Wilds, marks the continuing success of this southeast Ohio conservation center's breeding program. This is the second calf for dam "Sanya" and the first for sire "Rustum". "Rustum" is part of a group brought from India by the San Diego Zoo in 2007 to bolster the genetics of the U.S. one-horned Rhino population.

“Rustum came to us as a young male and took some time to mature. It is exciting to see that his bloodline will now be represented in the North American Rhino population,” said Director of Animal Management Dan Beetem. 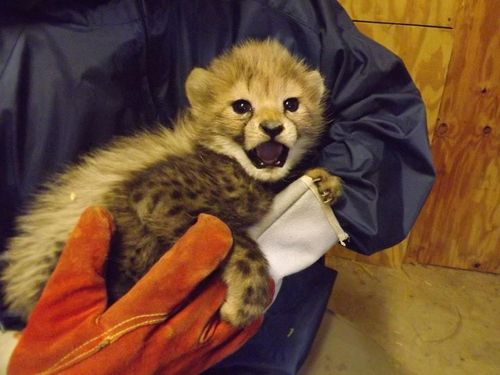 The Wilds in Ohio just finished their naming contest for their twin cheetah cubs, one male and one female, born on Octotber 31 to mom Tabu. We hear they are down to 4-6 sets of names but thought you'd like to see these babies as they decide. This is the second litter for Tabu but the first she is raising on her own. She's doing a great job, and has been very protective of her two little cubs.

Female cheetahs typically bear three to five cubs in a litter and the cubs stay with their mothers until they are 12 to 20 months old. A full-grown adult cheetah weighs between 86 and 143 pounds. Cheetahs live and hunt in open grasslands and bushy areas in parts of Africa and the Middle East. They are the fastest land mammals, reaching speeds of 60 to 70 miles an hour over short distances.

Cheetahs are included on the International Union for Conservation of Nature (IUCN) list of vulnerable species (African subspecies threatened, Asiatic subspecies in critical situation) as well as on the US Endangered Species Act: threatened species. Today there are just 12,400 cheetahs remaining in the wild, and the biggest population is currently located in Namibia with about 2,500 individuals. Asiatic subspecies is critically endangered counting only fifty to sixty individuals that still have their habitats in Iran. 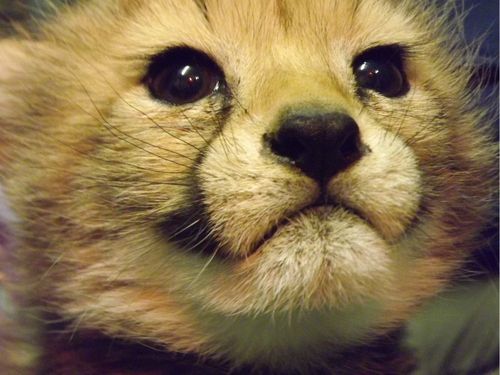 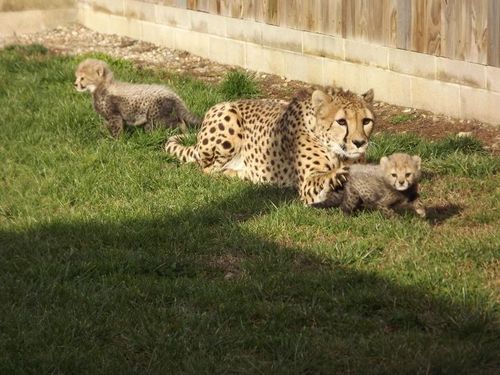 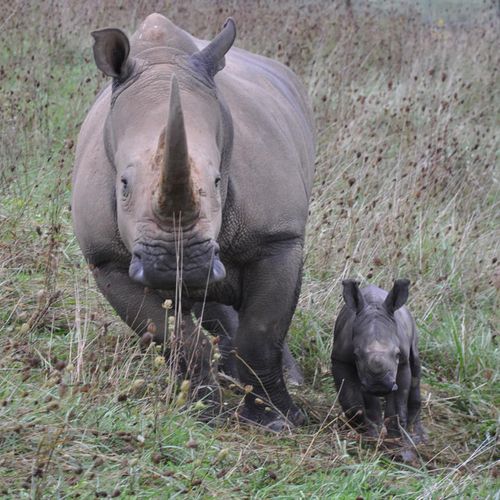 On October 2, Zenzele, a nine-year-old Southern White Rhino who was also born at the Wilds Conservation Center in southeast Ohio, gave birth to her second calf. The birth is particularly significant because this is the second fourth-generation calf born at the Wilds. 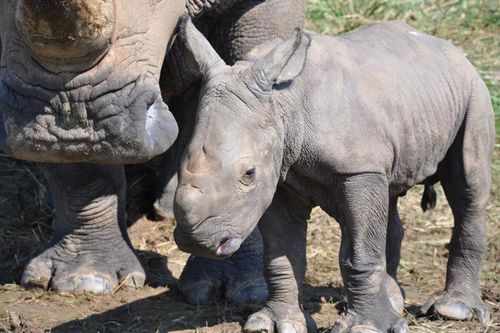 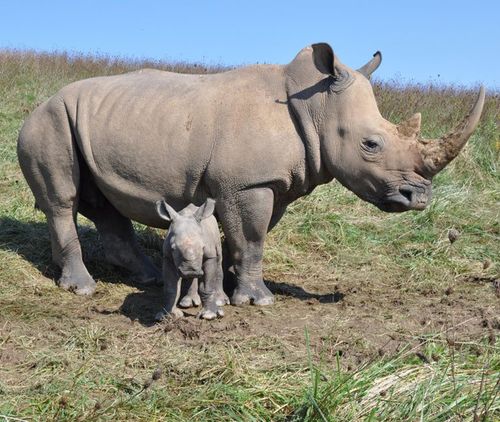 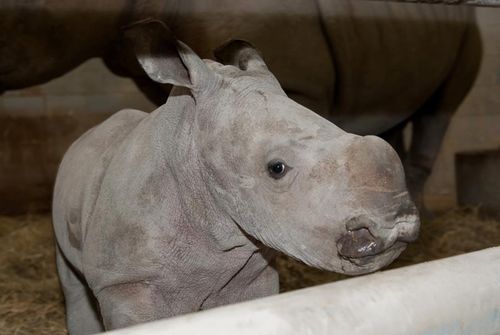 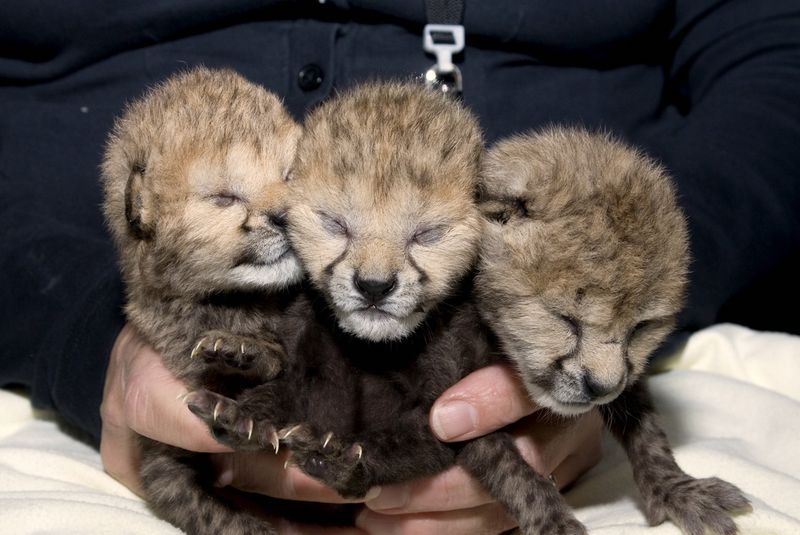 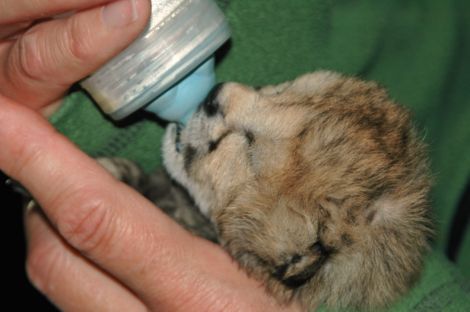