On the morning of November 13, 2021, Somali wild ass mare Mwana gave birth to little Salia. What sounds like good news was actually a race against time. The natural mother-young bond was broken after birth; Salia's survival was in danger. It was only thanks to the foresight of the veterinary team at Basel Zoo that the two of them trot together today.

Salia is the name of the youngest offspring of the Somali wild ass. As a descendant of the stallion Adam, who has few relatives in the European population, she is genetically a very important and valuable animal. The scenes that happened on the weekend of November 13th and 14th at Basel Zoo were therefore unsettling: the mare Mwana was visibly stressed and overwhelmed with the young animal after giving birth - which often happens with first-time mothers. This meant that the bond between mother and young animal could not develop properly. Mwana showed no interest in her boy and drove Salia away as soon as she wanted to drink. The chicks chances of survival dropped drastically.

A story with happy end

Basel Zoo wanted to refrain from hand-rearing. Good advice was expensive. Accordingly, the veterinary team at Basel Zoo got support from two horse specialists from the region on Monday, November 15, 2021. Together it was decided to give Mwana a hormone injection so that she could relive the birth hormonally. The vital bond between mother and foal was established within 30 minutes. For the first time, little Salia was allowed to drink extensively. Today the offspring is fine. She is playful and likes to test her long legs when she does sprints together with her mother in the outdoor area.

Salia is one of around 200 Somali wild asses living in zoos around the world. In nature, these donkeys are threatened with extinction and are among the rarest mammals. Only a few hundred animals still live in Ethiopia, Eritrea and perhaps Somalia. Wars, competition with the population's livestock and the meager food and water reserves have decimated their populations extremely in recent years. This makes the efforts of the zoological gardens all the more important with the European conservation breeding program, called EEP (ex situ program of the European Association of Zoos and Aquaria EAZA) to preserve this rare mammal species. Basel Zoo coordinates the EEP of the Somali wild ass and maintains the international herd book. 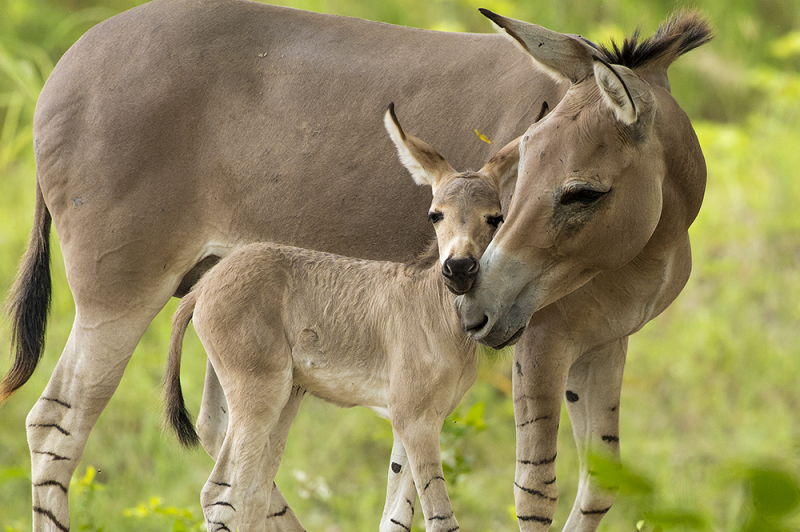 Zoo Miami celebrated the birth of a critically endangered Somali Wild Ass on June 16. The foal was born to 10-year-old dad Hakim and 13-year-old mom Stella.

The unnamed foal, the 8th born at Zoo Miami, is now in the zoo’s exhibit habitat with Stella and seems to be integrating well into the small herd.  A neonatal exam determined that the foal is a male and appears healthy, weighing 46 pounds. 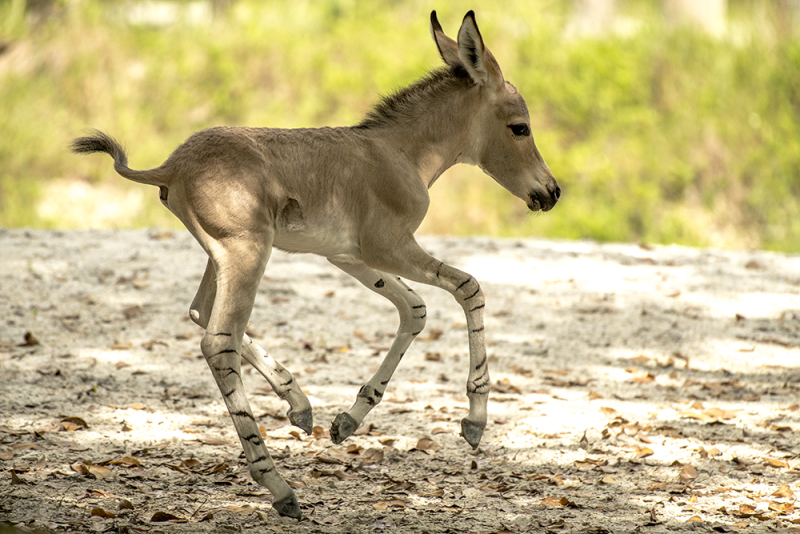 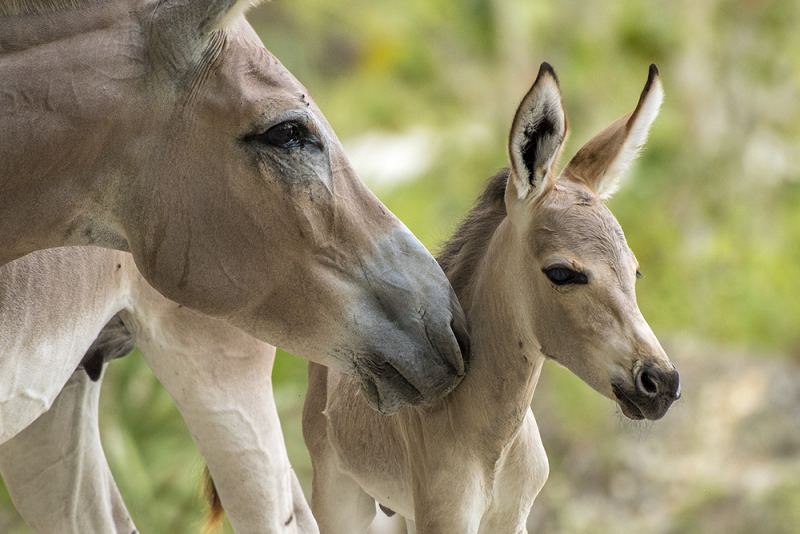 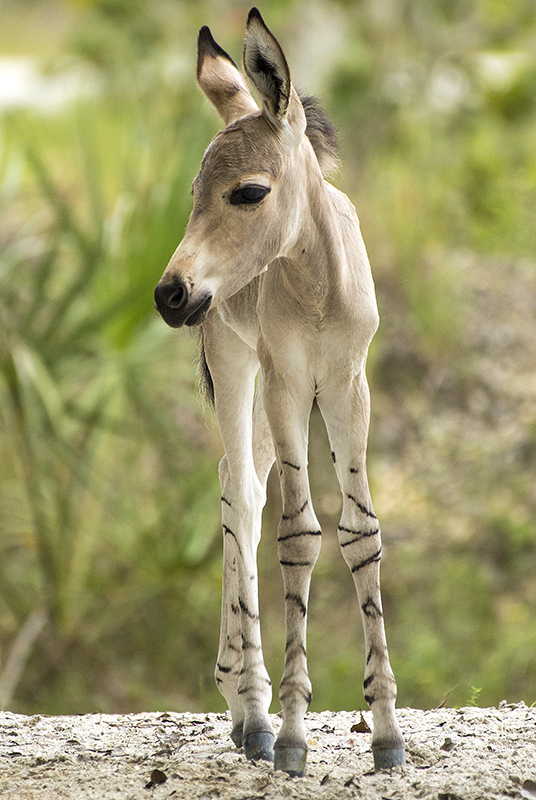 Somali Wild Asses are the world’s most critically endangered Asses with less than 1,000 believed to still exist in the rugged, rocky deserts of eastern Africa.  This species is the last remaining ancestor of the modern Donkey and is the smallest of the wild Equids. Adults weigh approximately 500 pounds and mares typically give birth to a single foal after an 11-month gestation.

Somali Wild Asses are characterized by a smooth gray coat and striped legs, which are a clue to their close relationship to zebras.

Zoo Miami began exhibiting the highly endangered Somali Wild Ass in 2011.  All the adult animals are on loan from the San Diego Wild Animal Park and arrived here as part of a carefully planned breeding program designed to maintain healthy populations of these extremely rare animals for generations to come. 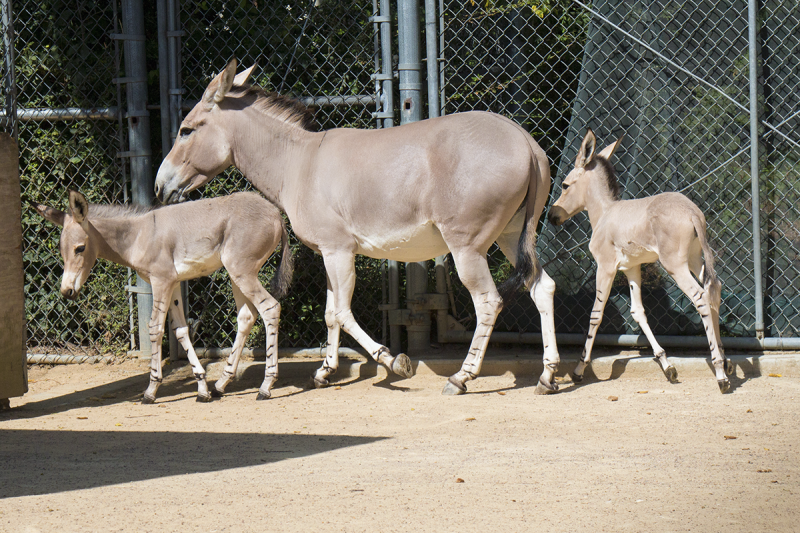 For the first time in Dallas Zoo’s 129-year history, they are proud to announce the birth of two extremely rare Somali Wild Ass foals. Born ten days apart, the little girls and their moms are doing great and have been bonding beautifully behind-the-scenes.

The first foal, named Kalila (“dearly loved” in Arabic), was born on July 9 to 13-year-old mom Liberty. This is dad, Abai, and Liberty’s third foal together; the pair previously welcomed two offspring at their former home, the St. Louis Zoo.

The second foal, named Naima (“calm” in Arabic), was born July 19 to the same dad, Abai, and first-time mom, five-year-old Hani. Just like her older half-sister, little Naima was standing, walking and nursing within minutes after birth.

“This is a big moment for our hoof stock team. Somali Wild Asses are critically endangered, with less than 600 left in the wild,” mammal curator John Fried said. “Only nine institutions in the U.S. care for this rare species, and to be able to welcome two babies is truly one of the highlights of my career.” 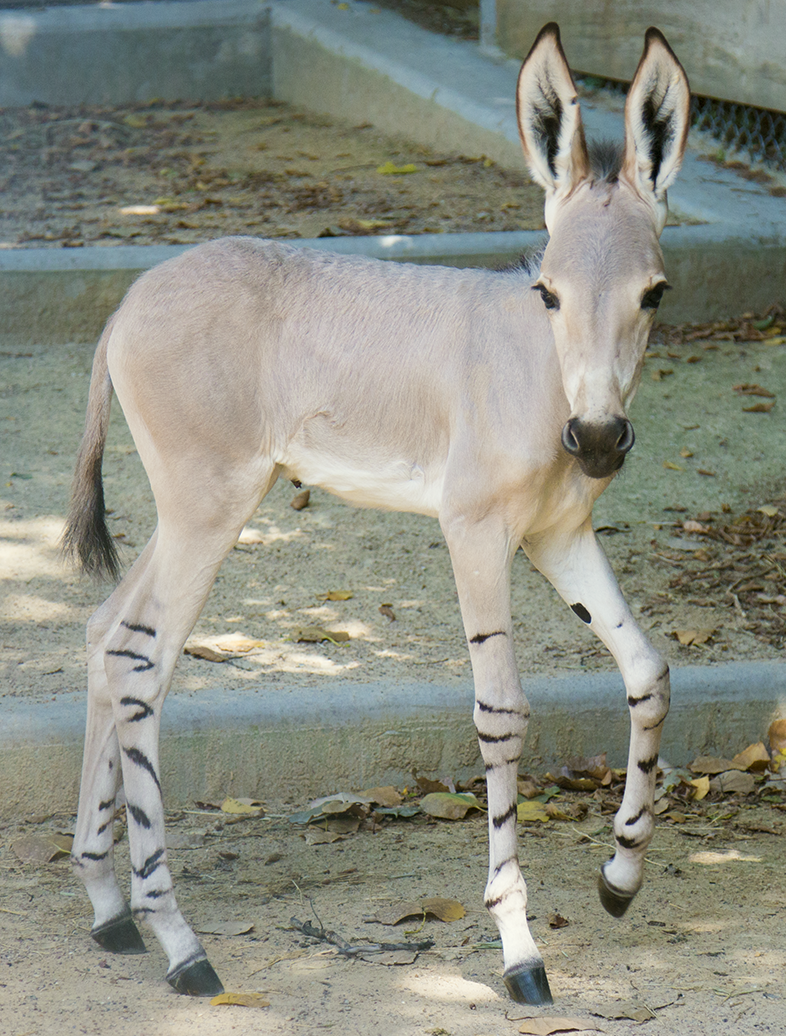 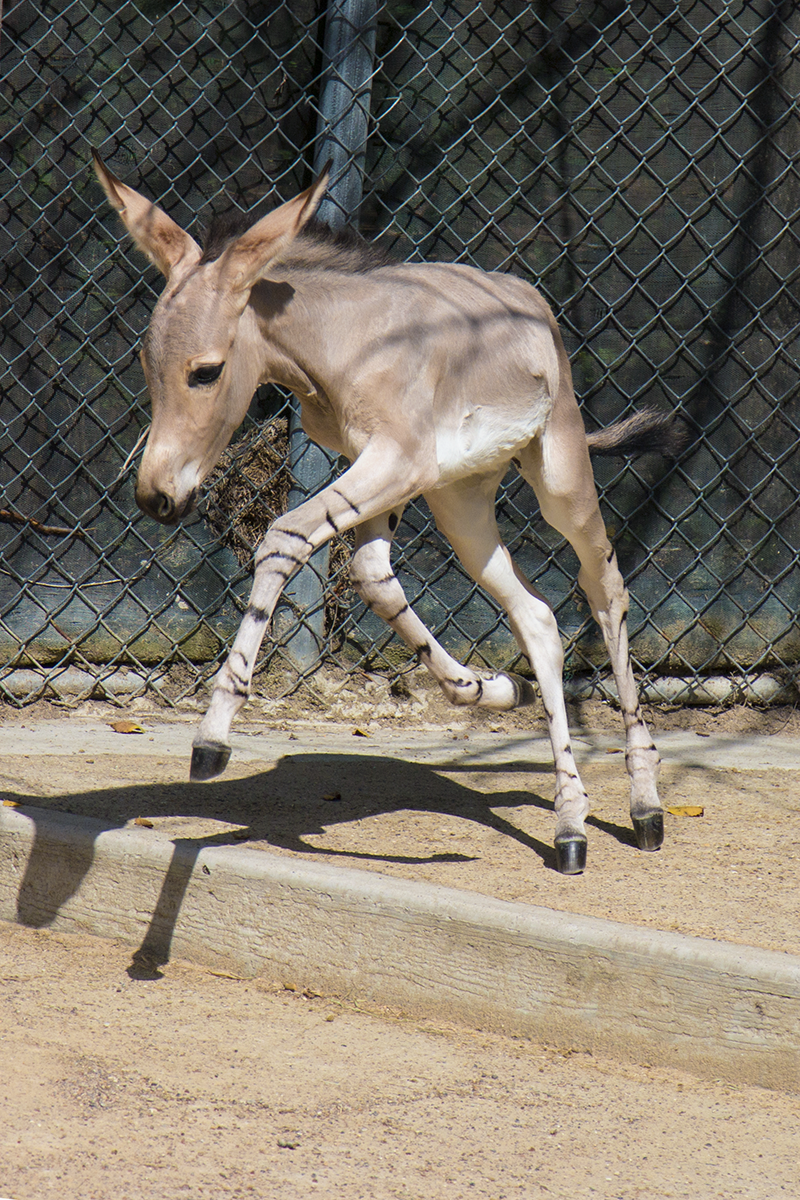 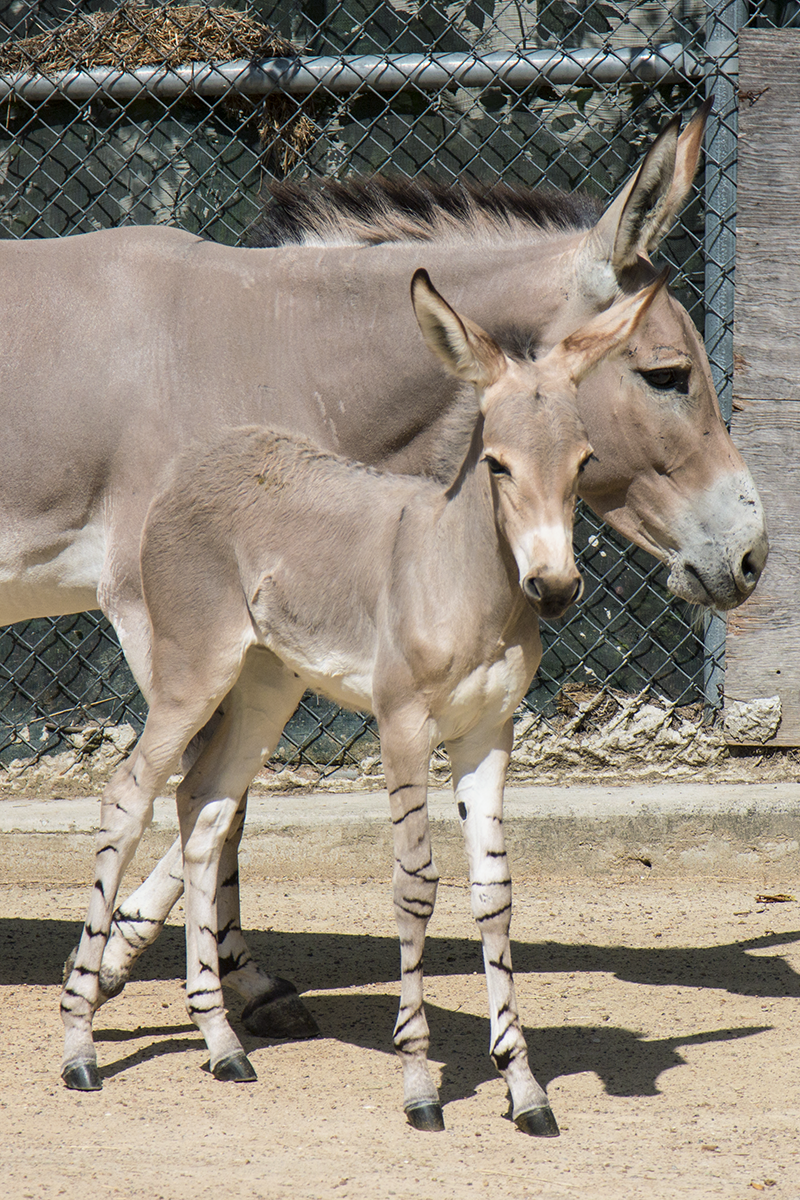 The Somali Wild Ass (Equus africanus somaliensis) is a subspecies of the African Wild Ass. Native to the arid regions of the Horn of Africa (Ethiopia, Somalia and Eritrea), there are many reasons the Somali Wild Asses’ numbers have dropped drastically in the wild. Locals hunt this species for food and traditional medicine. Some believe their fat treats tuberculosis. Somali Wild Asses also directly compete with livestock for limited land and water sources. Additionally, wild assess are crossbreeding with domestic asses, hurting the genetics of this species. 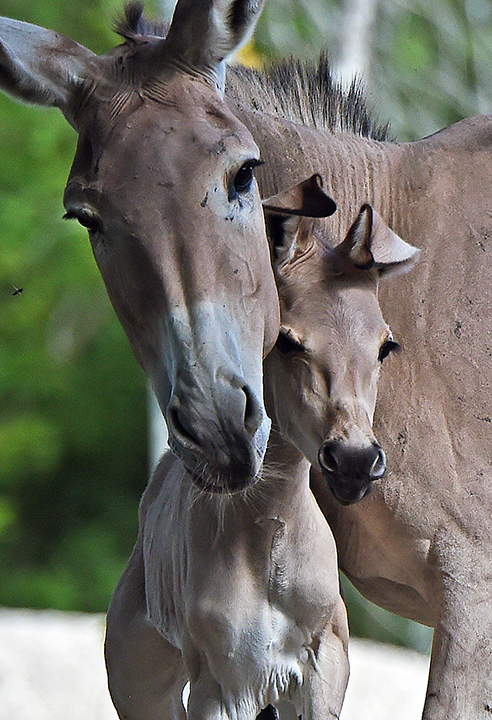 Zoo Miami is celebrating the birth of a critically endangered Somali Wild Ass. The male foal arrived July 23 and is the 5th of his kind born at Zoo Miami. New mom is 17-year-old Lisha. The new baby is healthy and seems to be integrating well into their small herd. 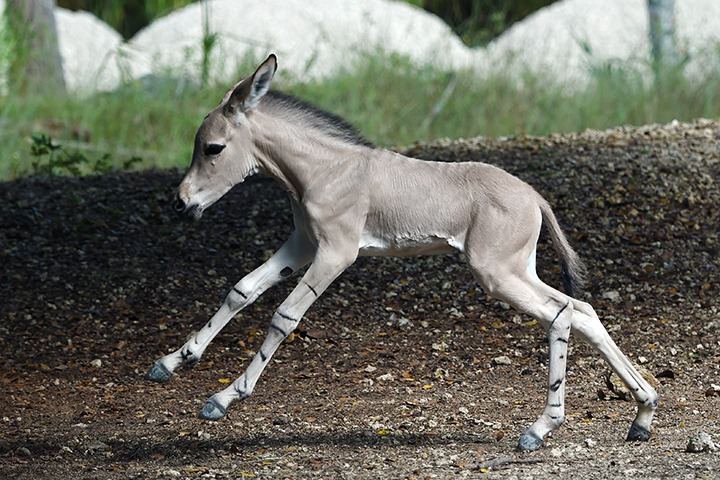 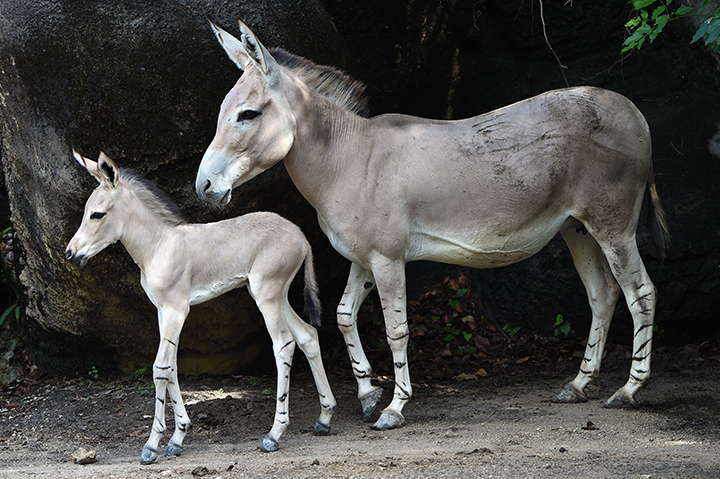 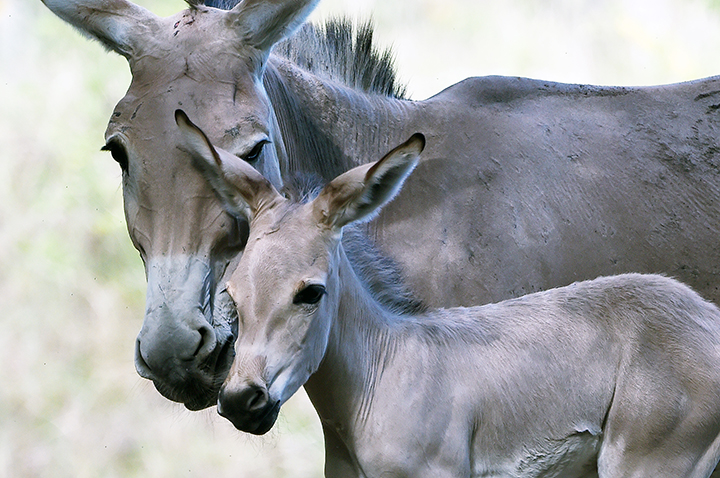 Somali Wild Asses are the world’s most endangered Asses. They are classified as “Critically Endangered” on the IUCN Red List, and less than 1,000 are believed to still exist in the wild.

A subspecies of the African Wild Ass, they are the smallest of the wild equids and are found in isolated areas of Somalia, the Southern Red Sea region of Eritrea, and the Afar Region of Ethiopia.

They are shorter than zebras or horses but have larger ears. Adults weigh approximately 500 pounds. Their smooth gray coat and their striped legs, which are indicative of their close relation to zebras, characterize them.

Mares usually give birth to a single foal after a gestation of 11 months. Though small herds, usually made up of mares and their offspring, do exist, the Somali Wild Ass often lives alone because of the scarcity of food. Solitary stallions protect their territory, which often includes a water source. Larger groups may form when more food and water is available (usually during the rainy season).

Zoo Miami began exhibiting the highly endangered Somali Wild Ass in 2011. All adult animals are on loan from the San Diego Wild Animal Park and arrived at Zoo Miami as part of a carefully planned captive breeding program designed to maintain healthy populations of these extremely rare animals for generations to come.

More amazing pics, below the fold!