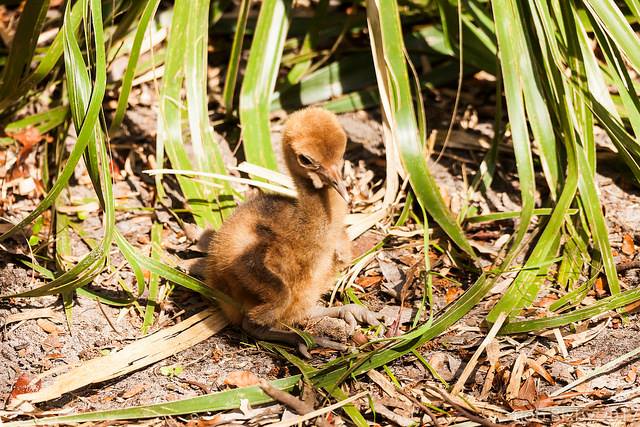 Keepers at Jacksonville Zoo recently discovered the egg their Wattled Cranes were sitting on was not fertilized. They contacted their friends at White Oak Conservation for assistance. White Oak happened to have a pair of Wattled Cranes who laid an extra egg.

The average clutch size of the Wattled Crane is thought to be the smallest of any of the world's cranes. Generally, in a nest of two or more eggs, only one chick will survive to hatch or fledge. Therefore, removing the extra egg was a possible ‘saving grace’ for the chick inside.

The cranes are raising the ‘adopted’ chick as their own, and visitors to Jacksonville Zoo can see the new family at the African Boardwalk exhibit! 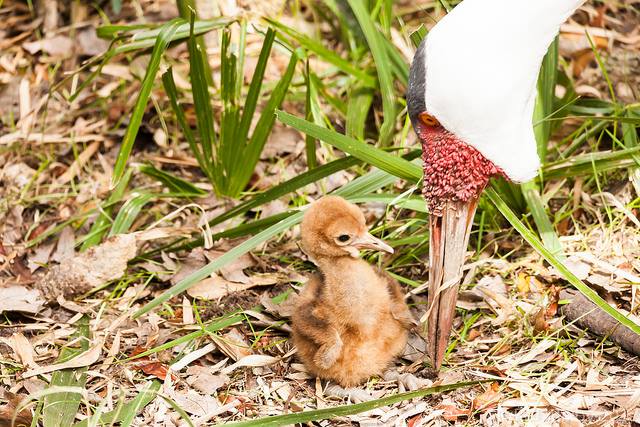 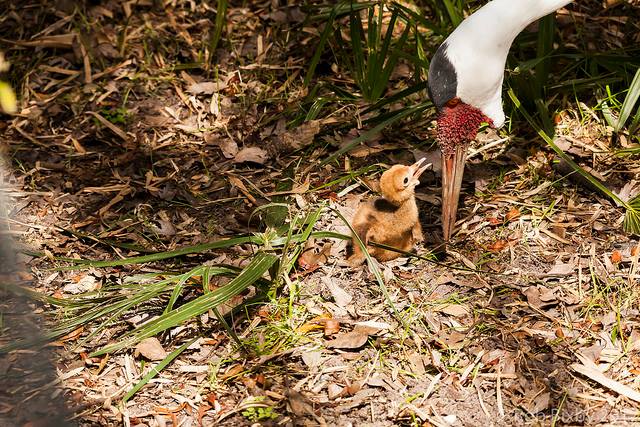 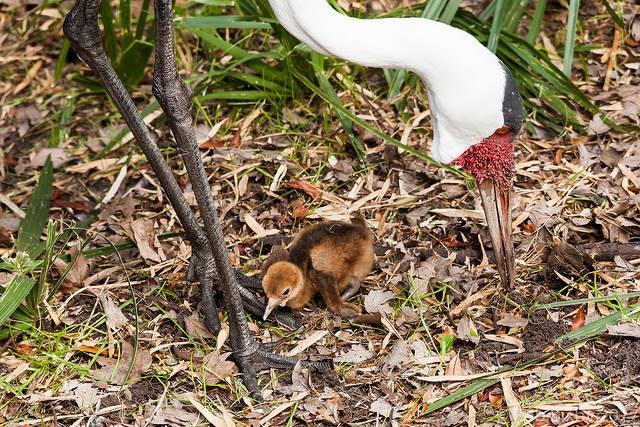 The Wattled Crane (Grus carunculata) is a large bird found in Africa, south of the Sahara Desert.

The Wattled Crane is native to eleven sub-Saharan countries in Africa, including an isolated population in the highlands of Ethiopia. More than half of the world’s Wattled Cranes occur in Zambia, but the single largest concentration occurs in the Okavango Delta of Botswana.

Cheetah Cub Gets a Lick of Love 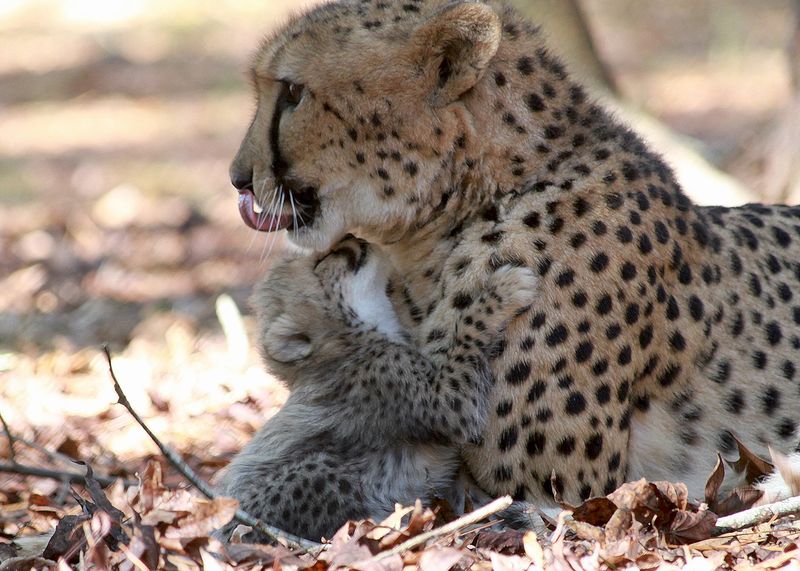 Florida’s White Oak Conservation Center has a new litter of Cheetah cubs!  Two male cubs and one female cub were born to mom Karamel in November. 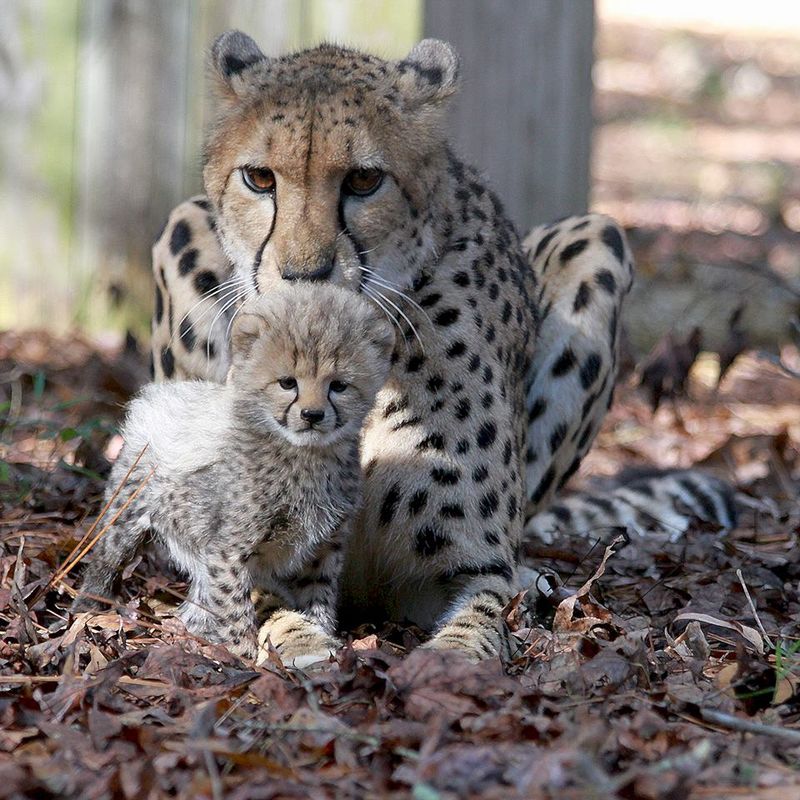 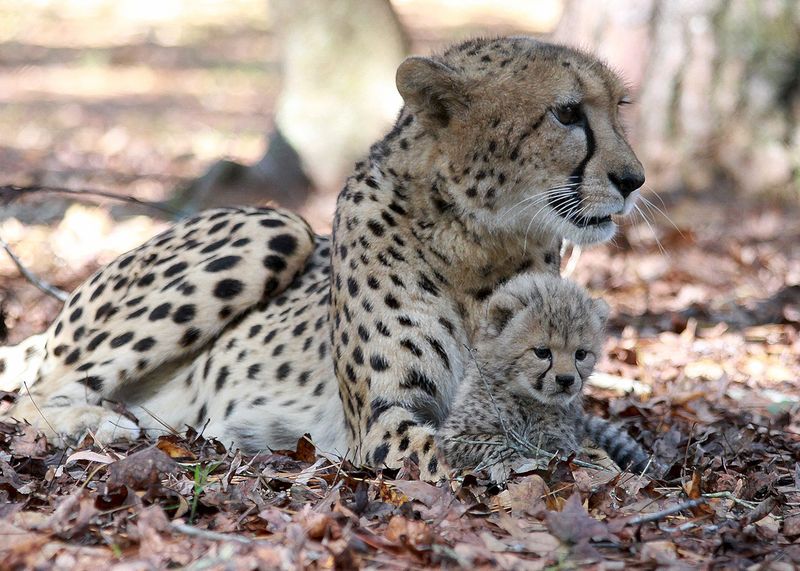 Zoo keepers report that Karamel is very protective of her cubs, which is a natural behavior that female Cheetahs exhibit in the wild.

Breeding Cheetahs, which are listed as Vulnerable by the International Union for Conservation of Nature, is a high priority for the staff at White Oak.  With Karamel’s litter of three cubs, 133 Cheetahs have been born at the center.

Though they are the fastest mammals on Earth, Cheetahs face many hurdles in the race against extinction.  Loss of suitable habitat is the primary threat to these cats, as well as persecution by farmers protecting their livestock.  Cheetahs’ unique genetics and their nutritional requirements make captive breeding especially challenging. 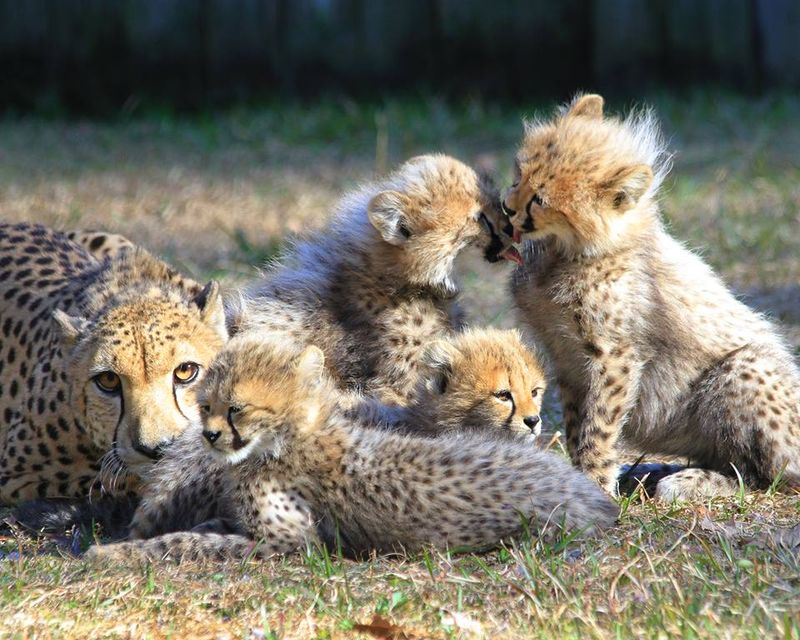 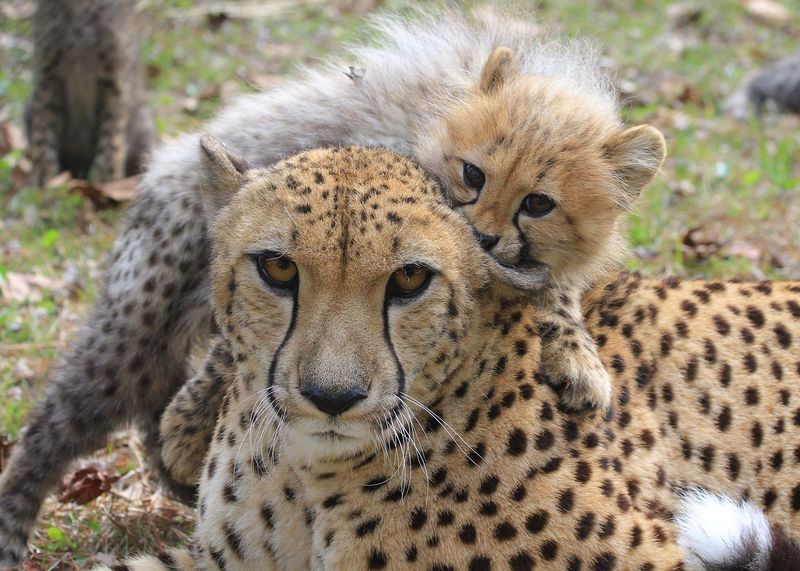 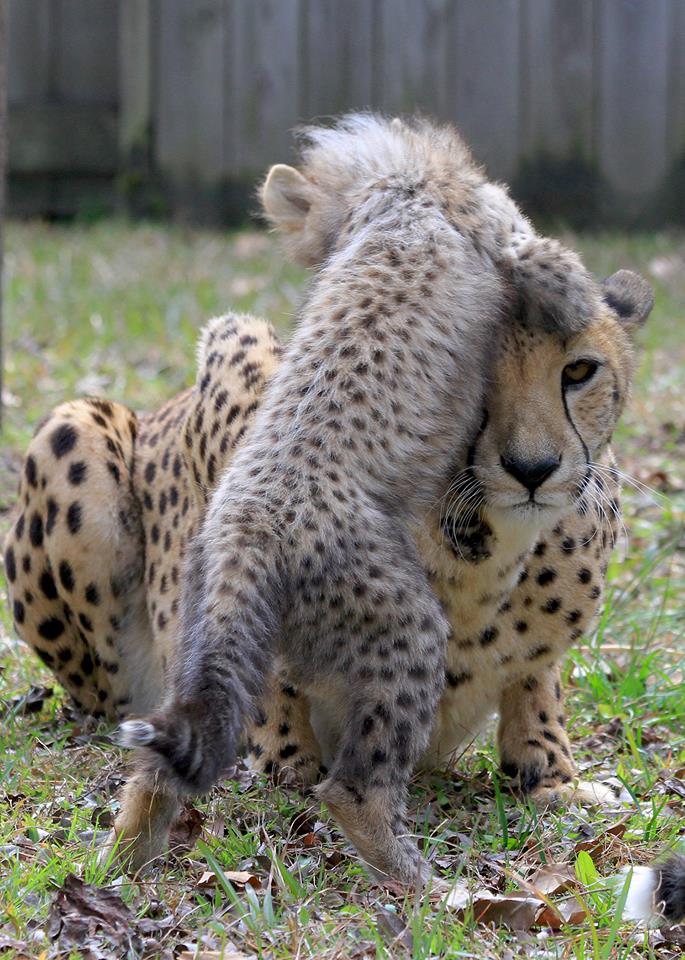 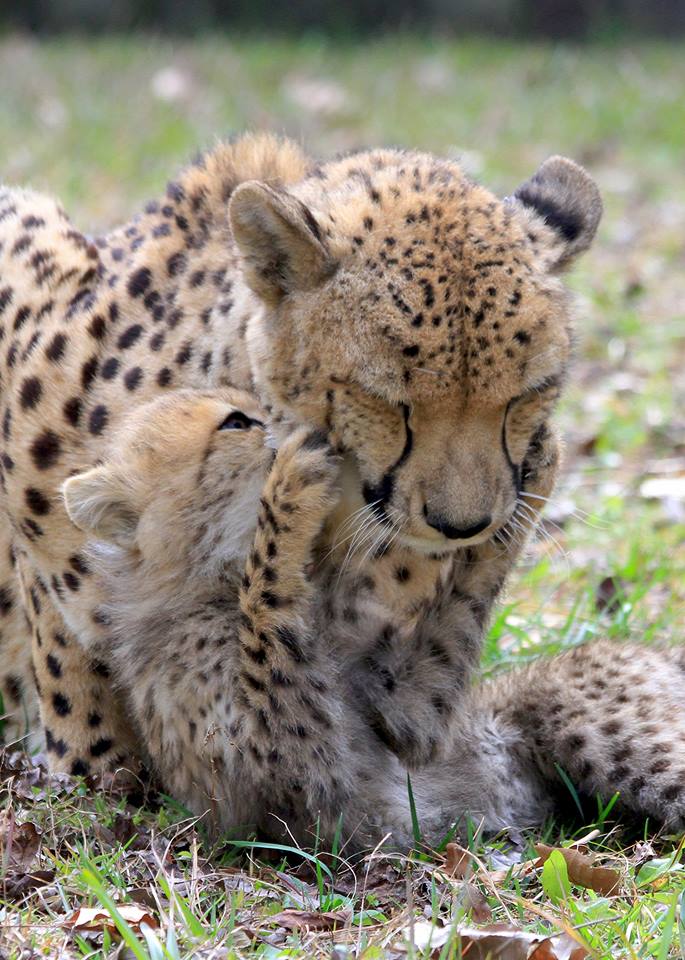 The cubs, born in December, treat mom (and each other) like a jungle gym.  But what looks like playtime to us is really “cheetah school” for the little ones.  As they climb, bite, swat, and wrestle, the cubs learn important skills that will prepare them for a life on the hunt.

Known by all as the world’s fastest animals, Cheetahs can run at speeds of 60-70 mph to capture prey on Africa’s savannahs.  Their population is declining in the wild due to habitat loss and persecution by farmers seeking to protect their livestock.  Cheetahs are listed as Vulnerable by the International Union for Conservation of Nature.

Due to their unique health and social requirements, these magnificent cats are very challenging to breed in captivity, but the White Oak Conservation Center is one of the world’s most successful Cheetah breeding facilities.  Working in collaboration with zoos around the country, White Oak is at the forefront of Cheetah conservation. 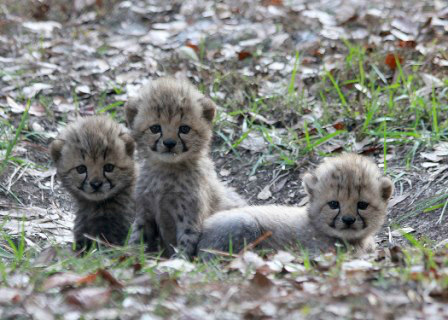 Three Cheetah cubs born at White Oak on November 26 are growing rapidly and thriving under the care of their mother, Sweeney.  Zooborns shared photos of the Cheetah cub trio when they were just one week old.  The five-week-old cubs are now eagerly exploring their outdoor habitat, though they rarely stray far from mom, who serves as a climb-on toy, shady rest stop, and all-around comforter. 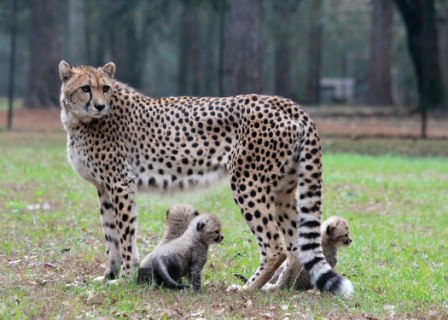 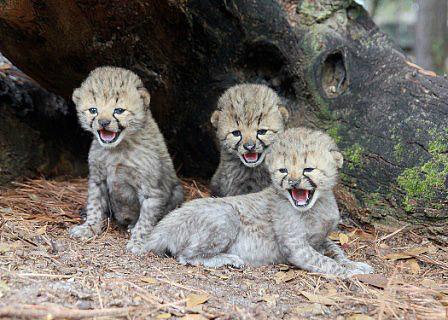 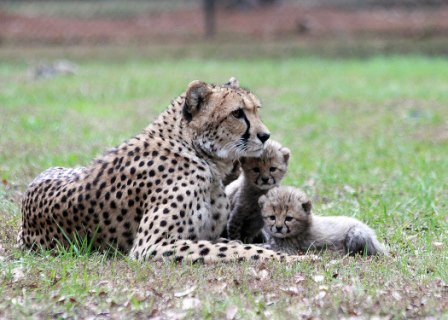 Sweeney is a first-time mother who is expertly caring for her babies.  White Oak staff conducted a health check on the cubs, but they are allowing Sweeney to raise the cubs just as she would in the wild.

Cheetahs in the wild are in drastic decline.  These stunning predators, capable of running at speeds up to 75 mph (120 km/h), are unable to outrun the threats to their survival.  Low genetic diversity in both the wild and captive populations contributes to the challenges facing this species.  About 12,500 Cheetahs remain in the wilds of eastern and southern Africa.

White Oak works collaboratively with the Species Survival Plan (SSP) of the Association of Zoos & Aquariums (AZA) as well as the Conservation Center for Species Survival (C2S2). White Oak is one of the most successful Cheetah breeding centers in the world.  These cubs are the 145th, 146th, and 147th Cheetah cubs born at White Oak. 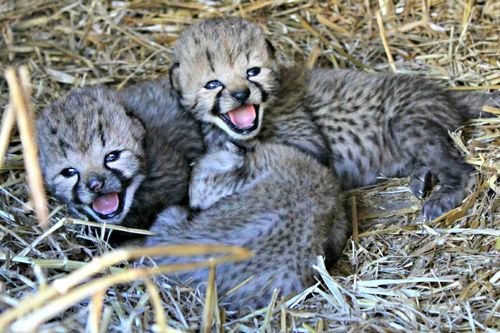 On November 26 a cheetah female at White Oak, a 7,400 acre Florida conservation center, gave birth to three healthy cubs.  The cubs, a female and two males, are being cared for by their mother, Sweeney, a four-year-old cheetah who was also born at White Oak.

Sweeney had not gained much weight during her pregnancy, so keepers were surprised when she delivered three cubs.  Despite being a first-time mother, Sweeney is expertly nurturing her three babies.  For a first- hand account of the cubs’ birth, check out White Oak’s keeper blog. 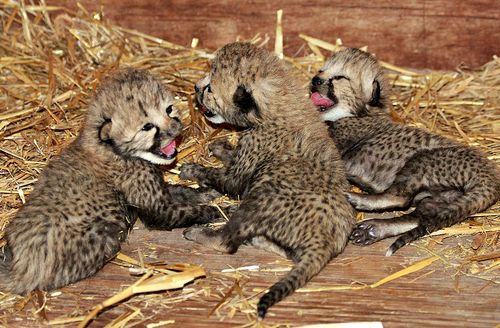 White Oak is one of the most successful cheetah breeding centers in the world, and these cubs mark the facility’s 145th, 146th, and 147th cheetah cubs.

“Breeding cheetahs is very challenging and with only a small portion of the population reproducing, and it’s very exciting when we have cubs from a first time dam or sire, as this helps keep the population genetically healthy,” says White Oak cheetah expert Karen Meeks. “I’m very happy to see a first time mother so relaxed and content caring for her cubs.”

The three new cheetah cubs will stay with their mother until they are about one year old.  The cubs will then be separated for placement in zoos and breeding centers, mimicking the natural dispersal process of cubs leaving their mother at that age.

The C2S2 consortium is comprised of five organizations, including White Oak, that collectively manage more than 25,000 acres devoted to endangered species study, management and recovery.  Together the C2S2 partners house over 80 cheetahs and account for a majority of the cubs born in North America each year.  Historically, the cheetah has low reproductive success in captivity, but the space, facilities, and expertise at White Oak and its C2S2 partners have resulted in increased success.

White Oak conserves and sustains some of the earth’s rarest wild animals through innovative training, research, education, and breeding programs that contribute to the survival of wildlife in nature.  The 7,400 acre facility is home to imperiled species from around the world including rhinos, cheetahs, and the elusive okapi.