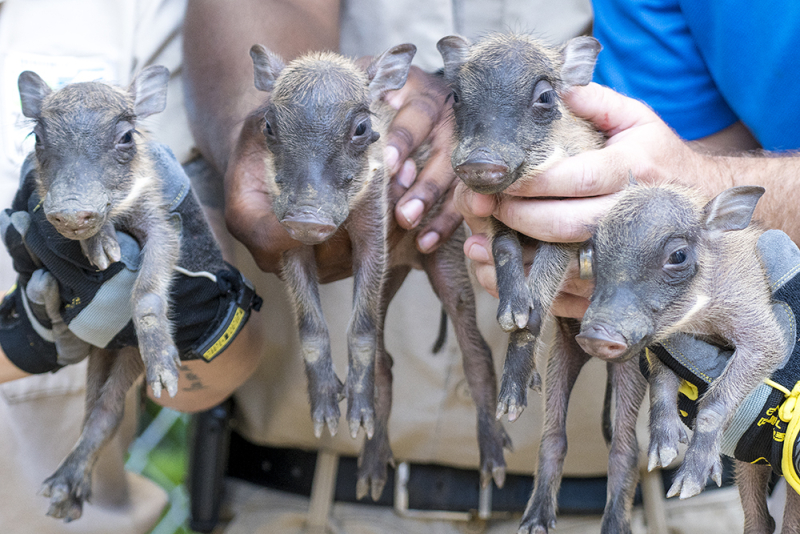 Zoo Miami is proud to announce the birth of four Warthogs!

The two males and two females were born on June 29, and they recently had their first neonatal exam. The exam confirmed their sex and helped to insure that they have an excellent start in life. The preliminary report was that all four piglets appeared to be healthy and are developing well. 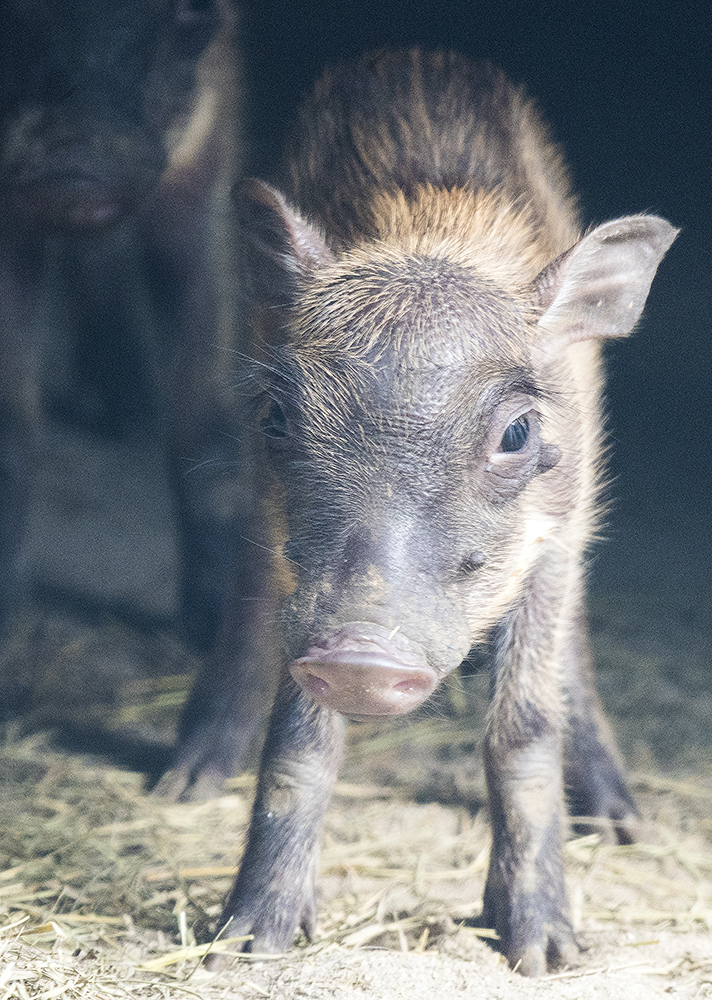 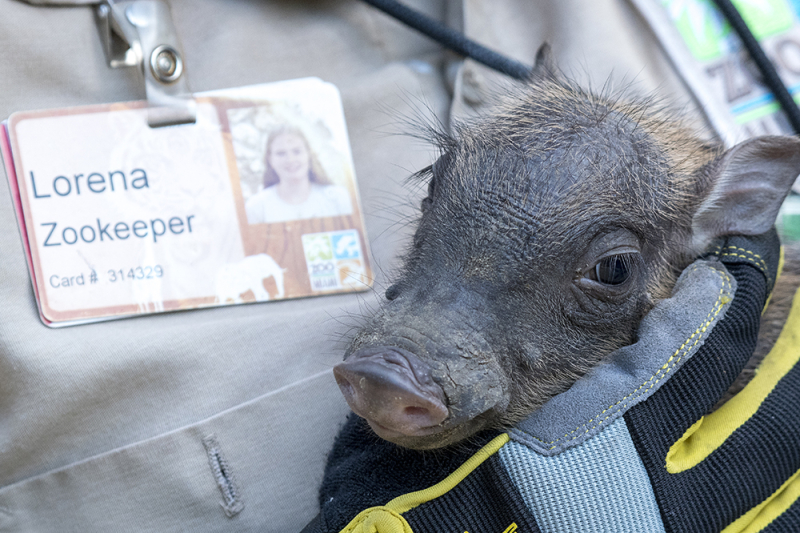 The mother will remain off exhibit with her piglets for an undetermined amount of time to insure that they have bonded properly and are well acclimated to their surroundings prior to going on public display.

Warthogs (Phacochoerus africanus) are found through much of sub-Saharan Africa. Though not naturally aggressive, these wild pigs are quite capable of protecting themselves with large, powerful tusks, which they normally use to tear up the ground in search of roots and grubs and to establish dominance between them.

Males develop considerably larger tusks than the females. The name Warthog is a bit misleading because the protrusions that come out of the sides of the head are not actual warts but rather fatty, granular tissue. 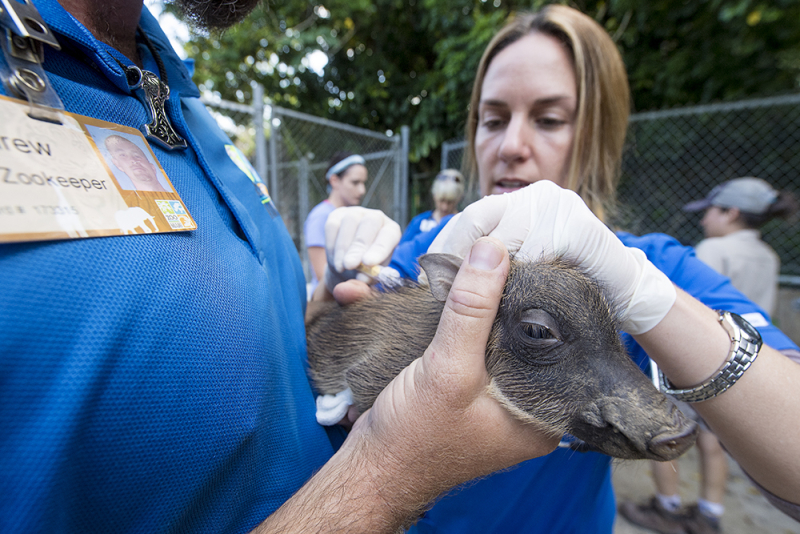 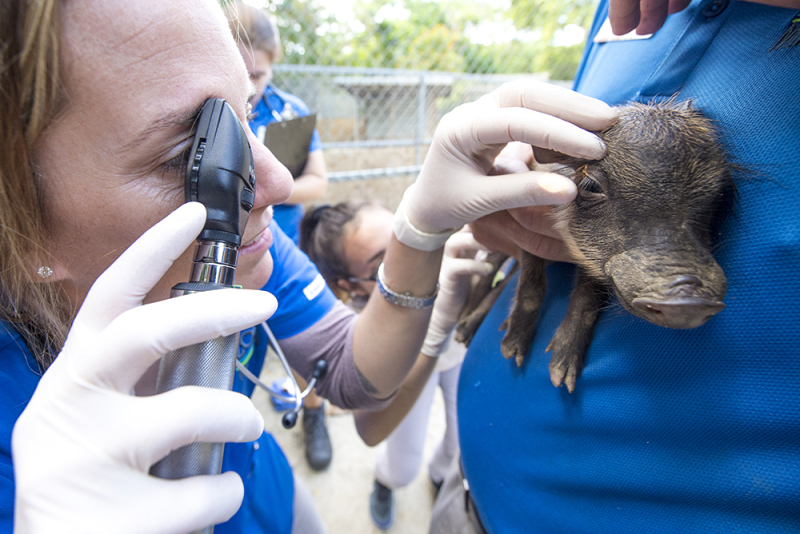 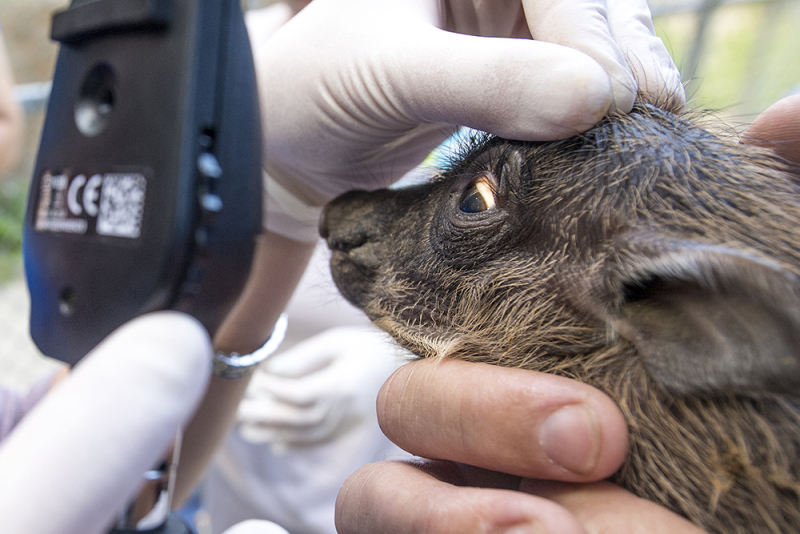 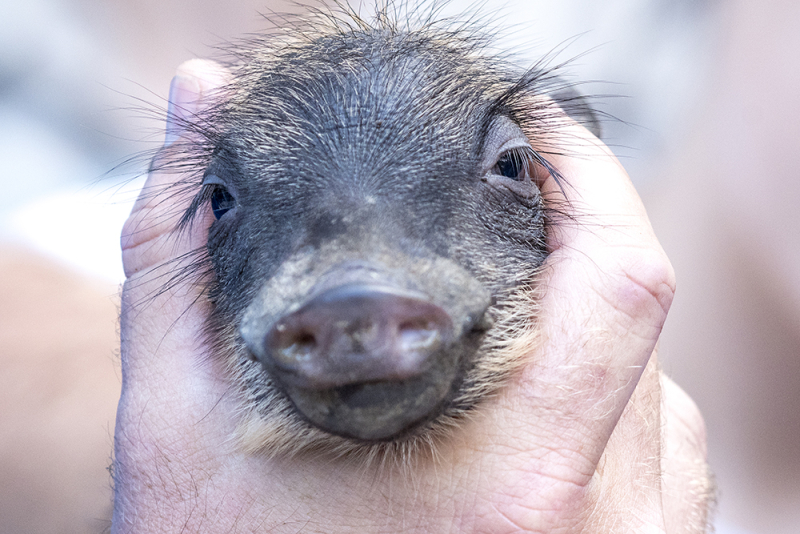 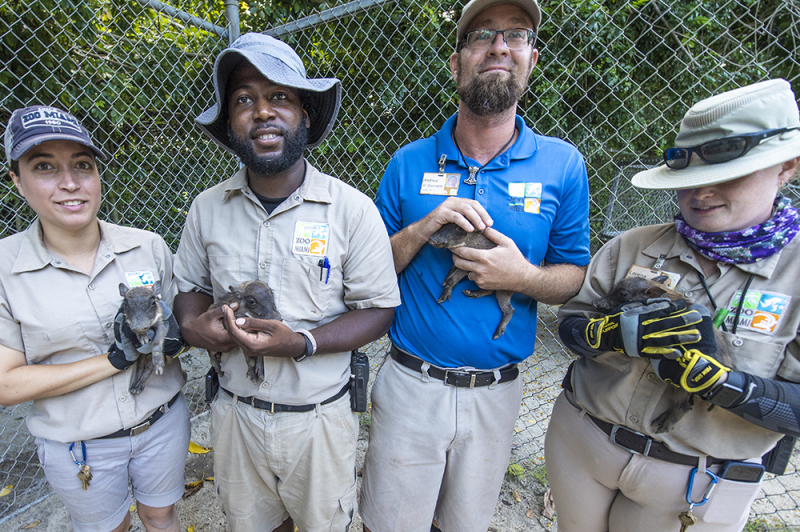 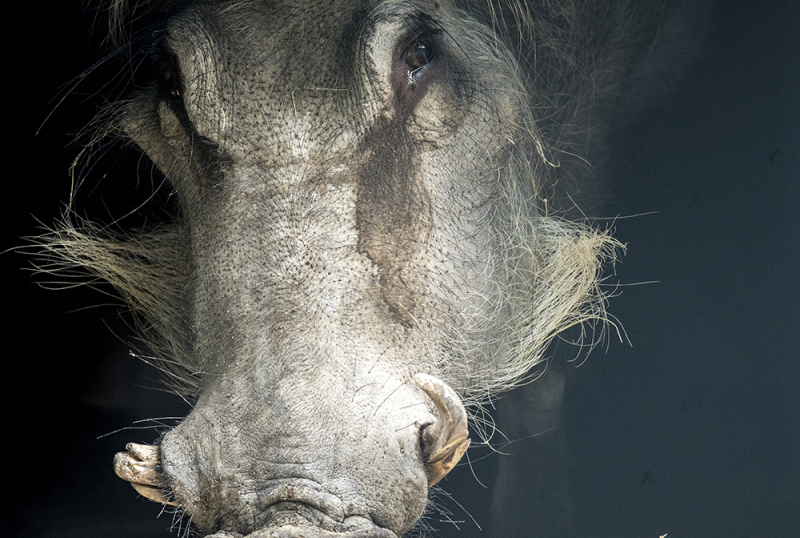 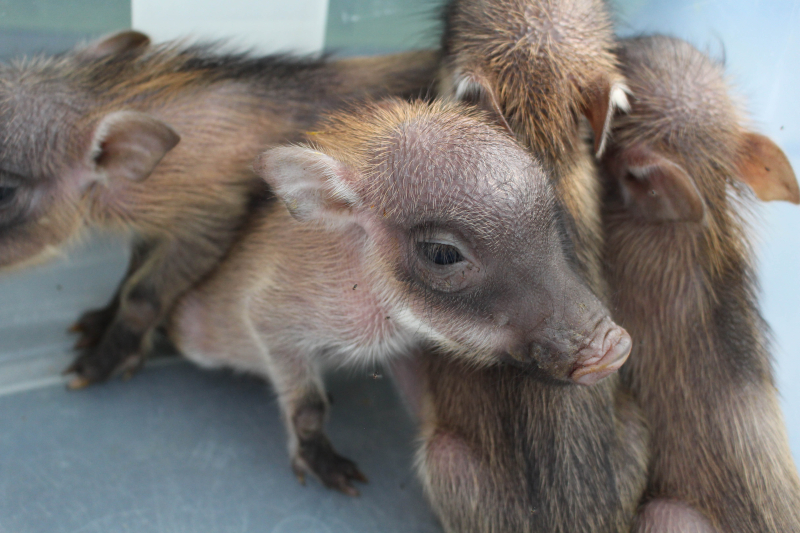 Jacksonville Zoo and Gardens is excited to announce the birth of four Warthog piglets on May 11. Two males and two females were born to first-time parents Chico and Acacia.

Father, Chico, was born at the Jacksonville Zoo and Gardens in 2011 and was also in a litter of four piglets. Acacia arrived at the Zoo in 2016 on a pairing arranged through the Species Survival Plan (SSP).

According to keepers, Chico and Acacia spent a few weeks getting to know each other, from the other side of some fencing, and were immediately showing positive interactions. Within minutes of being together for the first time, it was obvious the Zoo had a “love connection”. Keepers did not witness any breeding behavior after that first introduction back in November, which is a good indication that the breeding was successful.

The new litter of piglets received a check-up from Zoo Veterinarian, Dr. Yousuf Jafarey, and Veterinary Nurse, Dewey Maddox, when they were less than 24 hours old. Vet staff gave the litter a clean bill of health, and they were delighted to find the male piglets already have cute little warts. All four siblings were born with tiny tusks. 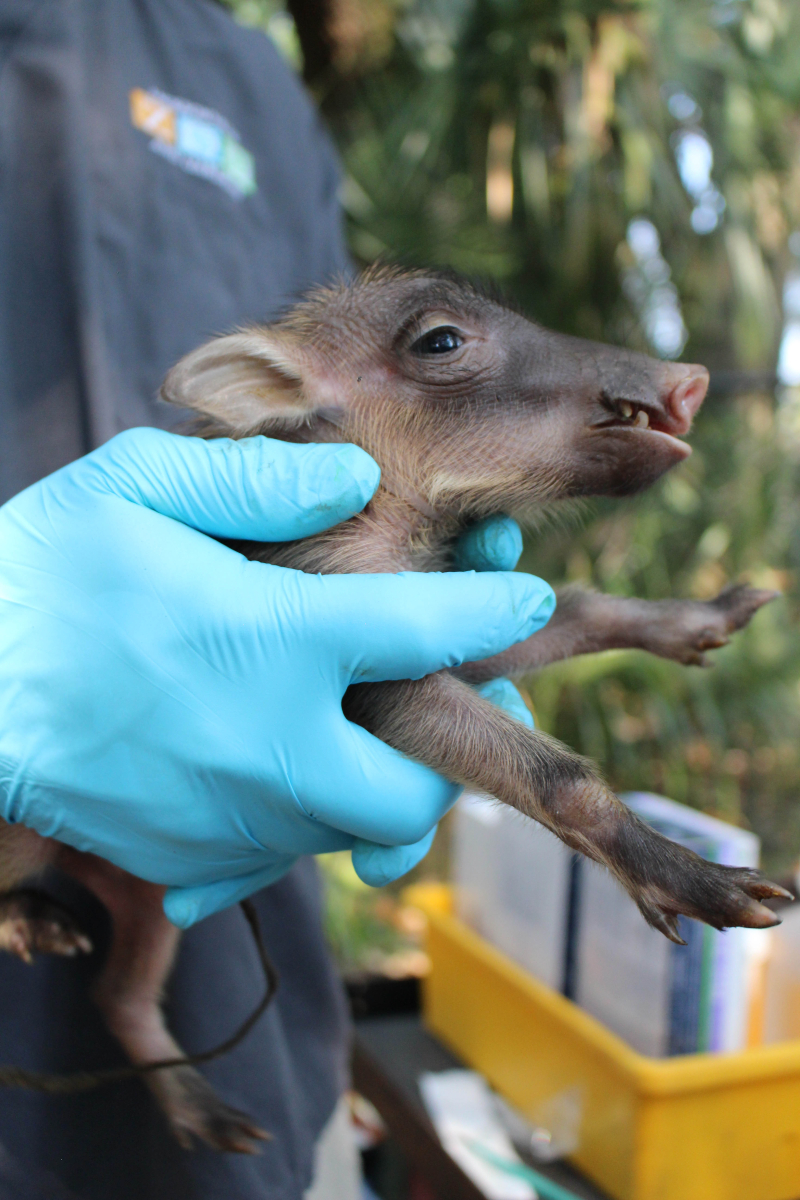 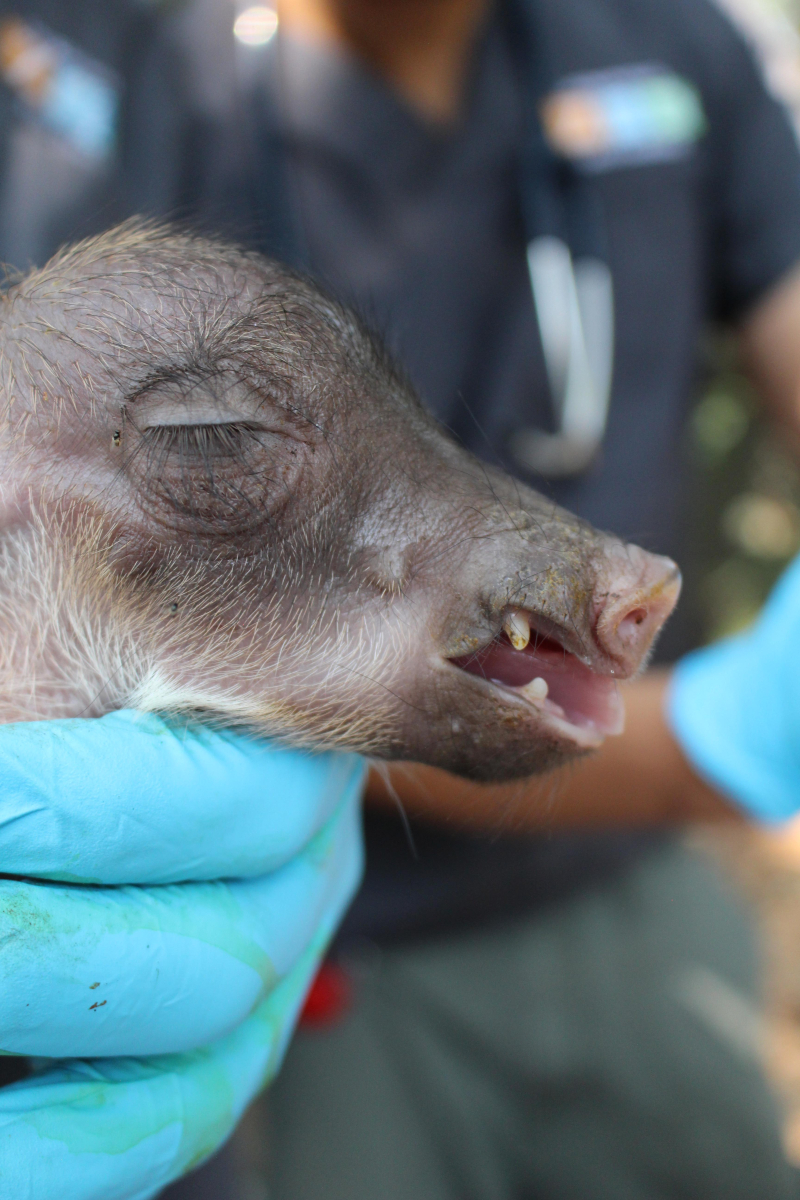 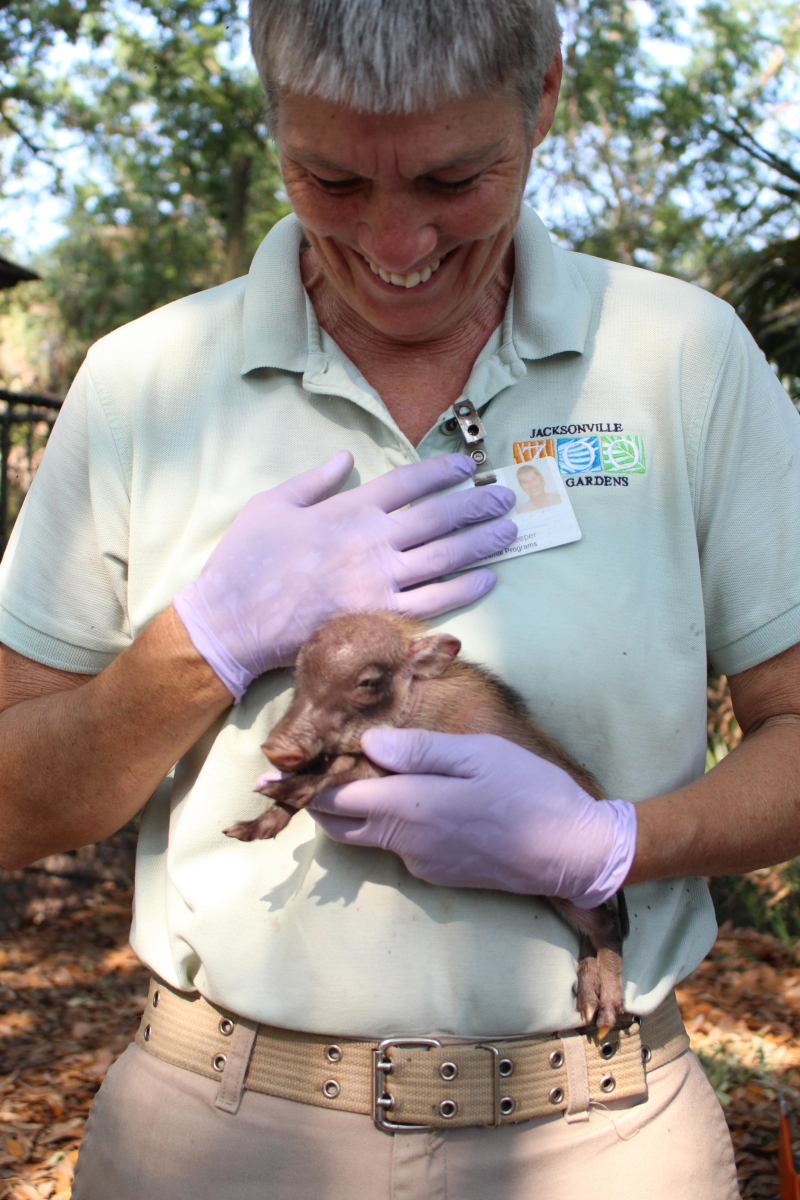 The little ones have been spending quiet time with mom, Acacia, with occasional outings into the side yard of the Warthog enclosure. They are expected to make their debut into the main Warthog yard within the next two weeks.

Executive Director, Tony Vecchio (a self-described ‘pig aficionado’), is over the moon and eagerly expressed his excitement: “Piglets! What could be a better way for children around town to start their summer vacations than coming out and seeing our Warthog piglets?”

Warthogs (Phacochoerus africanus) are African hogs and members of the same family as domestic pigs.

Although their appearance would suggest a species with ferocious tendencies, they are basically grazers that eat grasses and plants. They also use their snouts to dig or “root” for roots or bulbs. When startled or threatened, they can run at speeds of up to 30 miles an hour.

Their large, flat heads are covered with warts (protective bumps). When faced with a threat, they prefer “flight” as apposed to “fight”, and they will hastily search for such a den to use as a hiding place. They retreat into the den rear-first, enabling them to use their prolific tusks to guard the entrance.

Warthogs are currently classified as “Least Concern” on the IUCN Red List of Threatened Species. 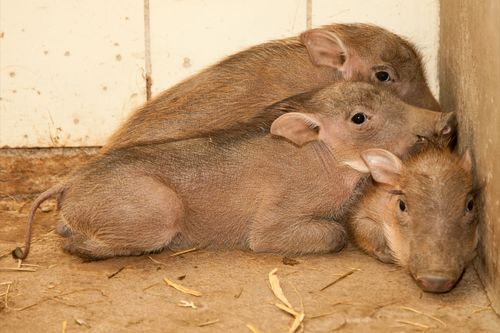 On February 27th, three little Warthogs were born at Burgers' Zoo in the Netherlands. The triplets are sure to be in good care with their mother, who has already successfully raised fifteen piglets before this latest liter. On March 21st the piglets were examined by veterinarians, given transponders, and sexed. It was determined that the zoo had received one male and two females. This news excited those working at the zoo as the females represent only the third and forth females of this mother's eighteen total offspring.

The latest birth brings the zoo's Warthog total up to eight. In addition to the parents of the most recent piglets, the zoo is home to three previous offspring of this breeding pair. This includes a male born in 2010 at the zoo, and a male and female born there just last year. The mother and her three piglets are currently separated from the adult male and their three previous offspring. The zoo typically keeps the young separated with their mother for about eight weeks before they are introduced to their father and the rest of their family. This mimics the time a litter would spend in a burrow with their mother following a birth in the wild. 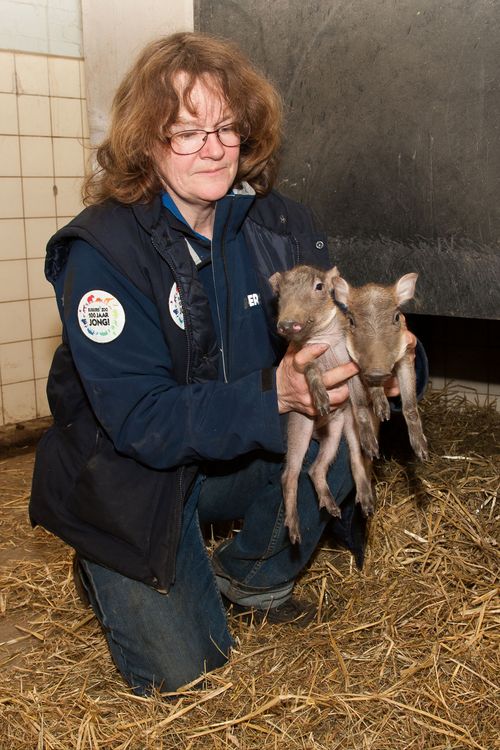 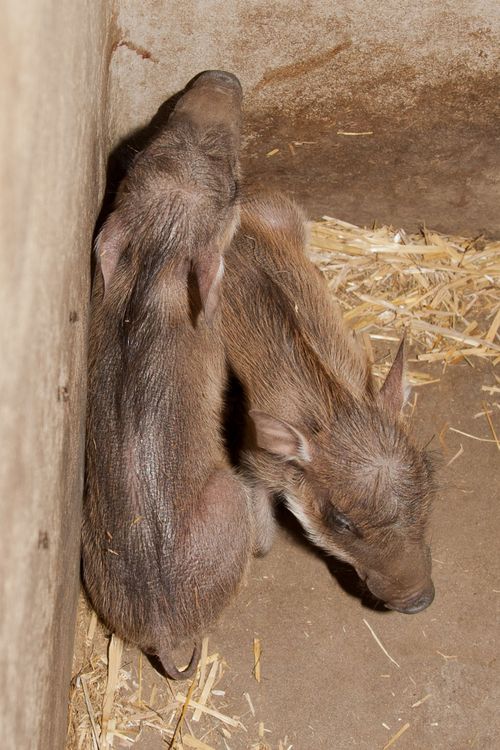 This piglets were born after a gestation period of approximately 155 days. They represent a very typical litter size, though litters can range anywhere between one and seven offspring. Though they were quite small when first born, the males will weigh upwards of 200 pounds when full grown, with the female reaching anywhere between 100 and 150 pounds. 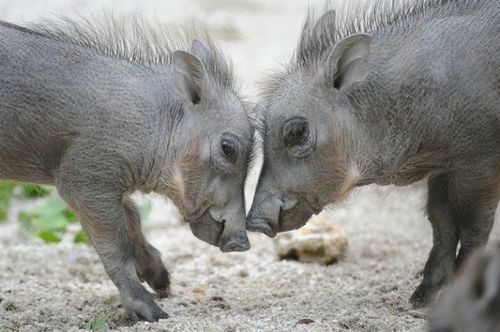 ZOO Miami is celebrating the arrival of a new litter of African Warthogs. The four female piglets, born on April 13, have spent the last several weeks behind the scenes with their protective mother to ensure that they are healthy and developing well. The Zoo aims to have them on exhibit with their parents for the upcoming Memorial Day weekend.

Warthogs are a type of African wild pig that is distinguished by large upward curving tusks and what appear to be large “warts” growing out of the sides of their heads. These warts are actually cartilaginous tissue that is more pronounced in the males. They are common throughout much of sub-Saharan Africa, can grow to be close to 250 pounds and live up to 15 years. 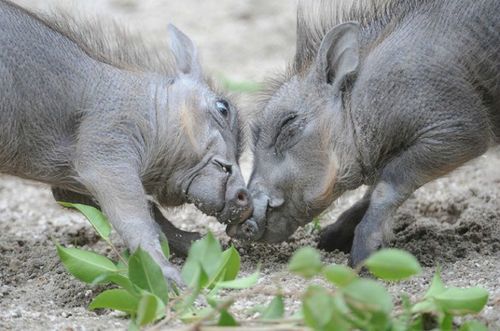 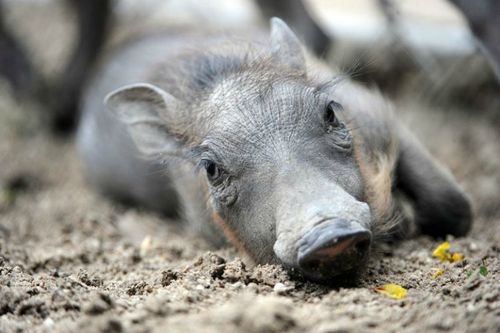 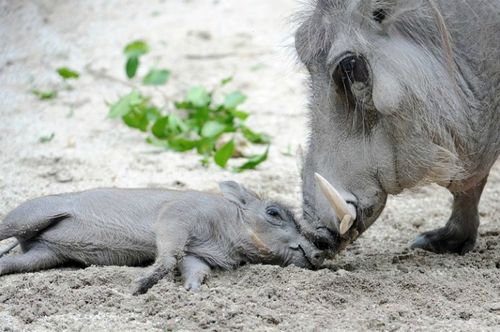 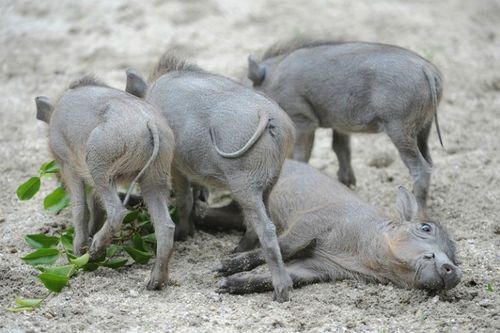 Want more warthog babies? The pictures continue after the jump: