Checking In With Baby Udara

On May 7, 2022 the Topeka Zoo welcomed their newest addition. A critically endangered Bornean Orangutan named Udara, the Malay word for "air." Use #HelloUdara to follow along, or visit topekazoo.org/hellobaby. You can also follow along on the zoo’s social media platforms. 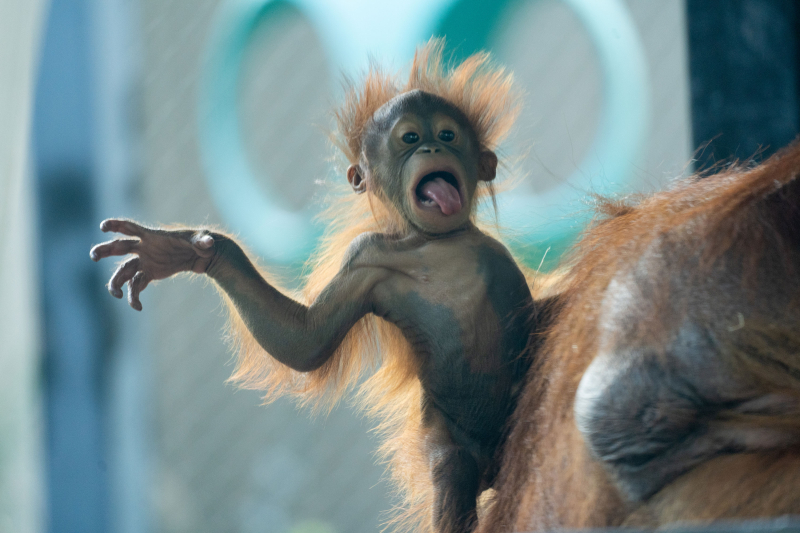 Here’s some of the highlights since birth as well as the gender reveal celebration.

Can you guess the infant’s sex before the gender reveal at the end of the clip?

Just In Time For Mother’s Day…

This morning Topeka Zoo’s Bornean Orangutan Rudy gave birth to their newest addition. Today zoo officials closed the Lianas Forest building to provide additional privacy and allow for bonding. Both infant and mother appear to be doing well, and they anticipate the building reopening tomorrow, on Mother’s Day! Tune in to find out who’s on the way for Topeka Zoo! 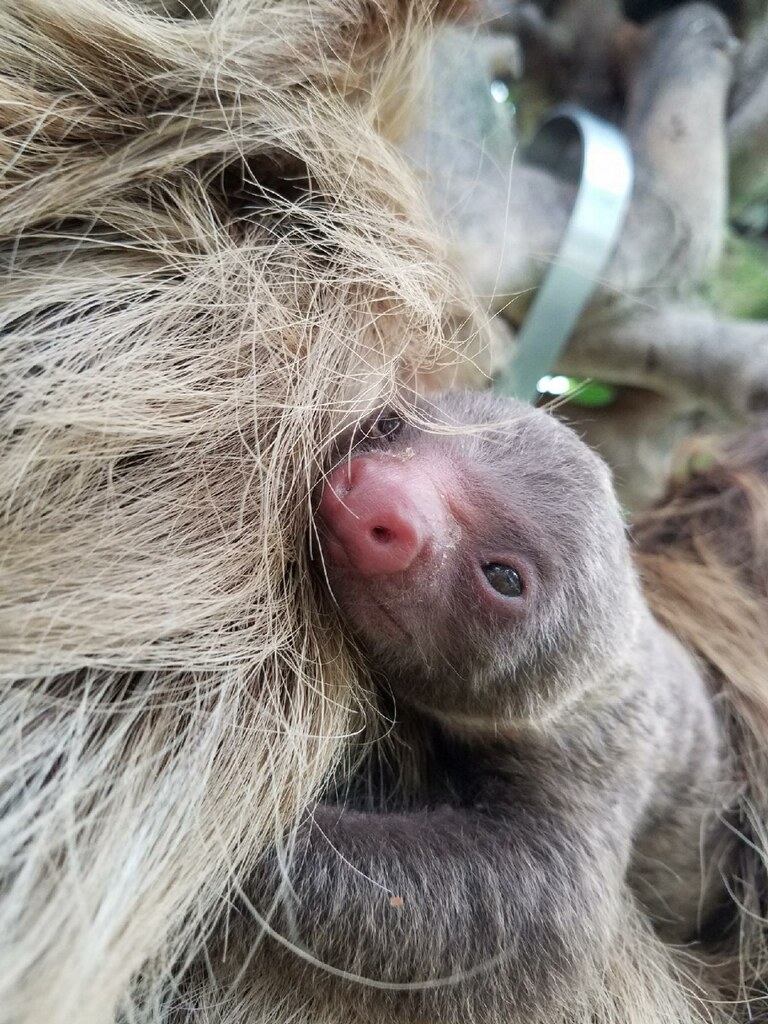 A sweet Hoffman’s Two-toed Sloth, born at the Topeka Zoo on December 16, is clinging to mom and doing everything a baby Sloth should do.

When new mom Jacque showed her new baby to the Zoo’s Animal Care Staff, the baby was alert and clinging to mom in a good nursing position. According to keepers, both mom and baby appear to be bright and alert and doing great. A primary zookeeper at the Zoo’s Tropical Rain Forest exhibit has named the baby “Foley”.

There are currently four Sloths living in the Topeka Zoo’s ‘Tropical Rain Forest’. They include new mother, Jacque (age 27), father, Mocha (age 19), Newt (age 1) and the newborn, Foley. This is the 15th offspring for Jackie and the fourth for Mocha. Zoo staff monitored Jacque’s pregnancy closely but had high confidence that mom knew exactly what to do.

The Topeka Zoo is proud of the long successful history with Sloth reproduction, and they attribute it, largely, to the rain forest environment the Sloths are provided at the Zoo. 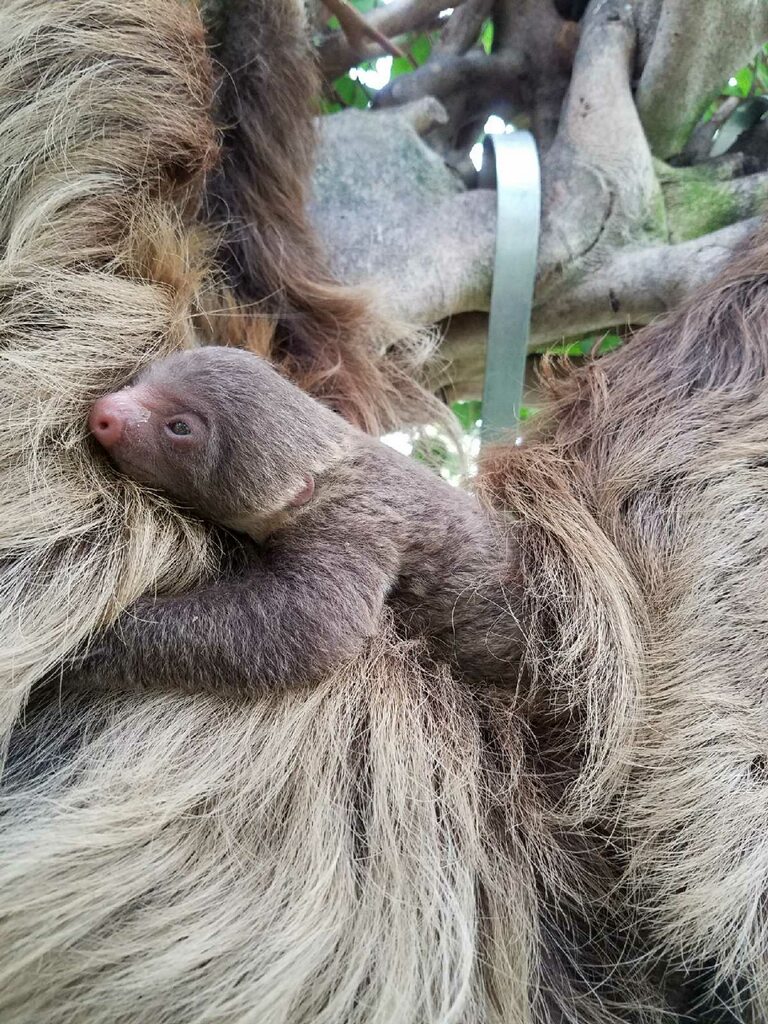 The Hoffmann's Two-toed Sloth (Choloepus hoffmanni) is a species of sloth native to Central and South America.

It is a solitary, largely nocturnal and arboreal animal, found in mature and secondary rainforests and deciduous forests. The common name commemorates the German naturalist Karl Hoffmann.

Sloths are known for their slow moving, solitary arboreal behavior. They do everything upside down, including: eating, sleeping, mating and even giving birth.

Habitat destruction is causing a decrease in the wild Hoffmann's Two-toed Sloth population, but sloths and humans have little contact with one another in the wild. They are currently classified as “Least Concern” on the IUCN Red List. 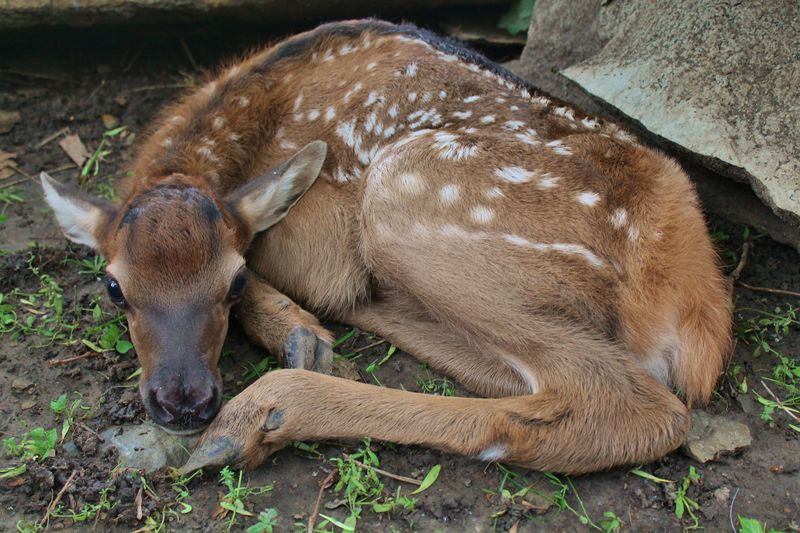 On June 2, the Topeka Zoo welcomed a female North American Elk calf. The girl was born to 4-year-old mother Aspen, and she has been given the name Maple. According to Zoo Staff Veterinarian, Dr. Shirley Llizo, the birth was “textbook style from delivery to nursing.” 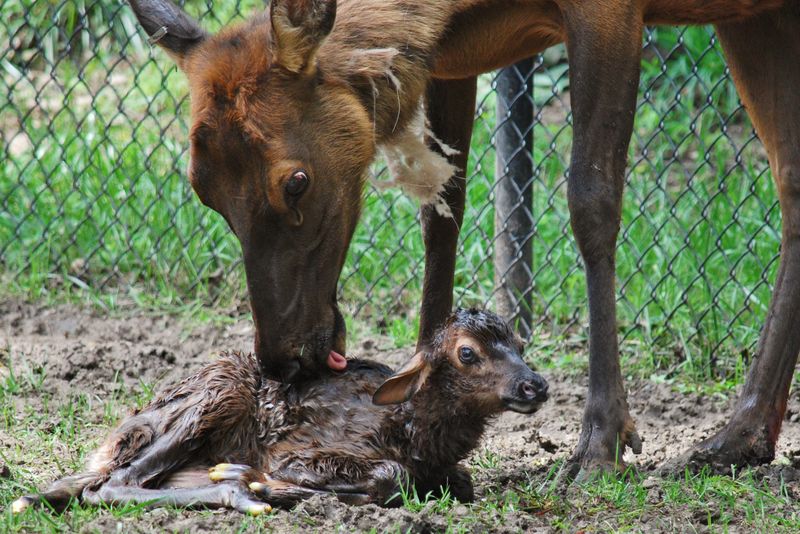 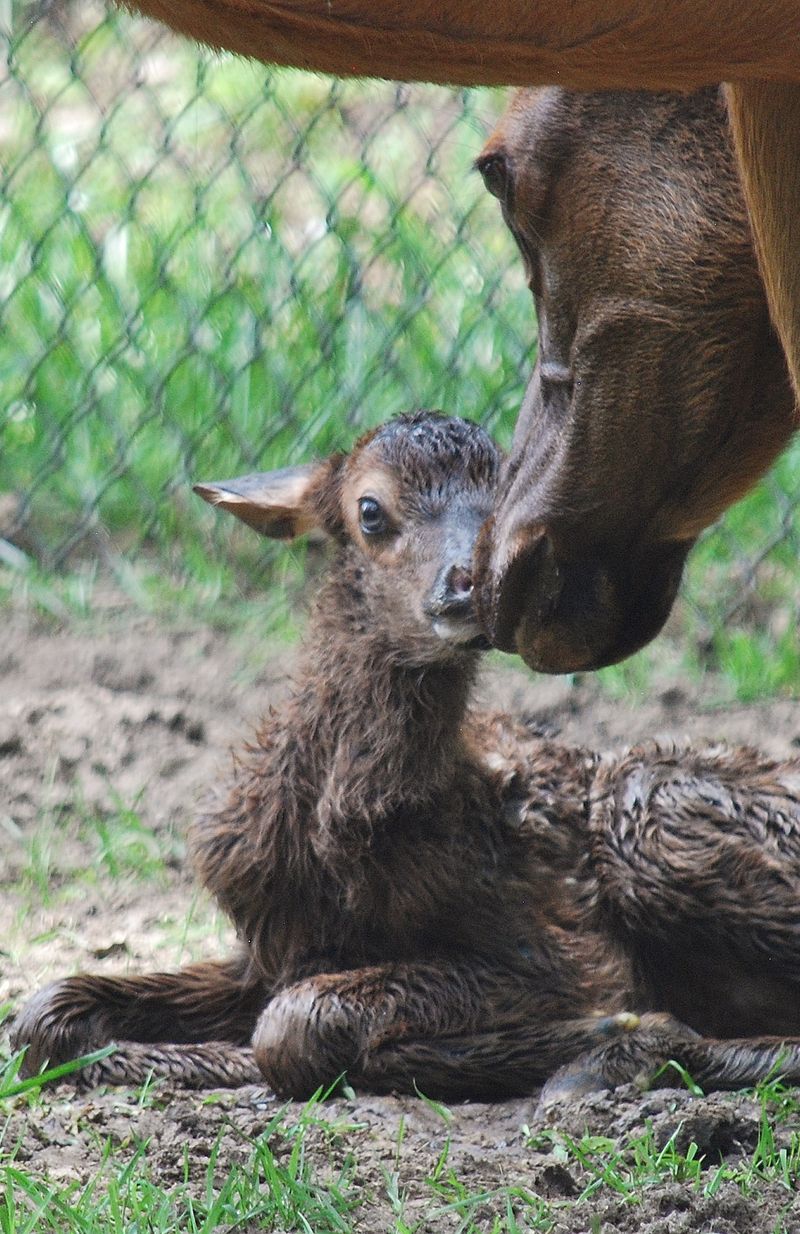 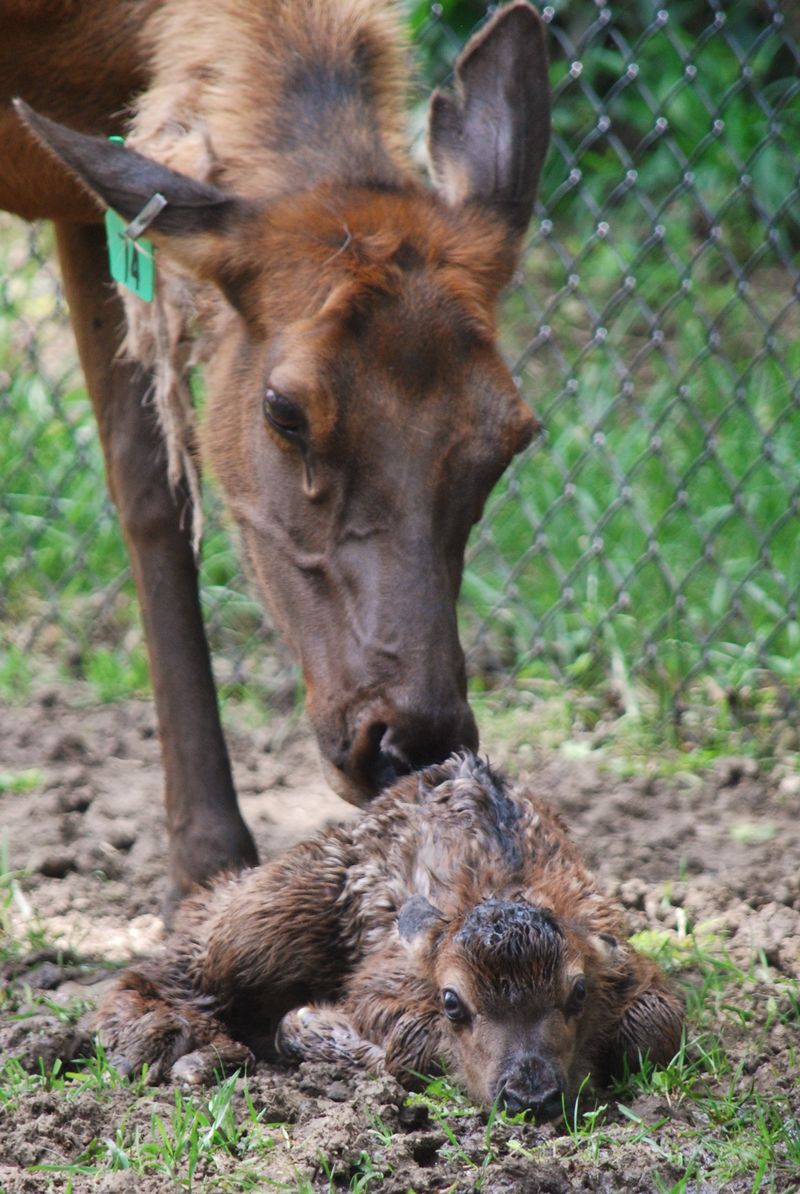 The zoo is now home to three Elk: Aspen and her one-year-old daughter, Juniper, and newborn Maple. The newest girl recently joined her mom and sister on public display.

The Elk calf is now on public display with mom and sister, Juniper.

The Topeka Zoo’s Elk were a donation from local chiropractor, Dr. Tim Bolz.

They prefer to reside in forest and forest-edge habitat, feeding on grasses, plants, leaves and bark. Males have large antlers, which are shed each year. Males also engage in ritualized mating behaviors during the rut, including posturing, sparring, and bugling (a loud series of vocalizations which establishes dominance over other males and attracts females.

Females have a short estrus cycle of only a day or two, and mating usually involves a dozen or more attempts. By the autumn of their second year, females can produce one, or occasionally two, offspring. Gestation period is 240 to 262 days, and the offspring are born weighing about 33 to 35 lbs (15 to 16 kilograms). Calves are born spotted and lose the spots by end of summer.

The Elk is currently classified as “Least Concern” on the IUCN Red List of Threatened Species. Some cultures revere the species as a spiritual force and use their antlers and velvet in traditional medicines. They are also hunted as a game species.

Topeka Zoo “Gets ‘Round” to Announcing Armadillo Birth 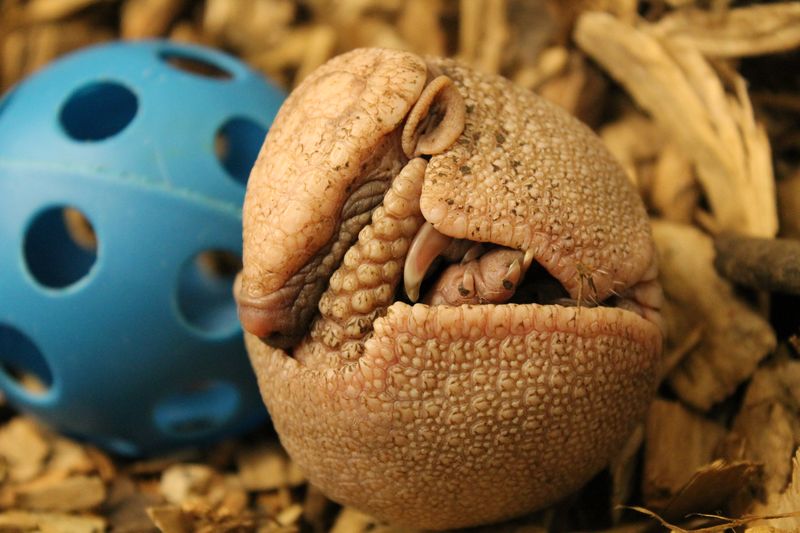 The Topeka Zoo is excited about the arrival of their newest Southern Three-Banded Armadillo. The spherically prone boy was born May 5th and is the third offspring of mom, ‘Erin’, and dad, ‘Mulligan’. 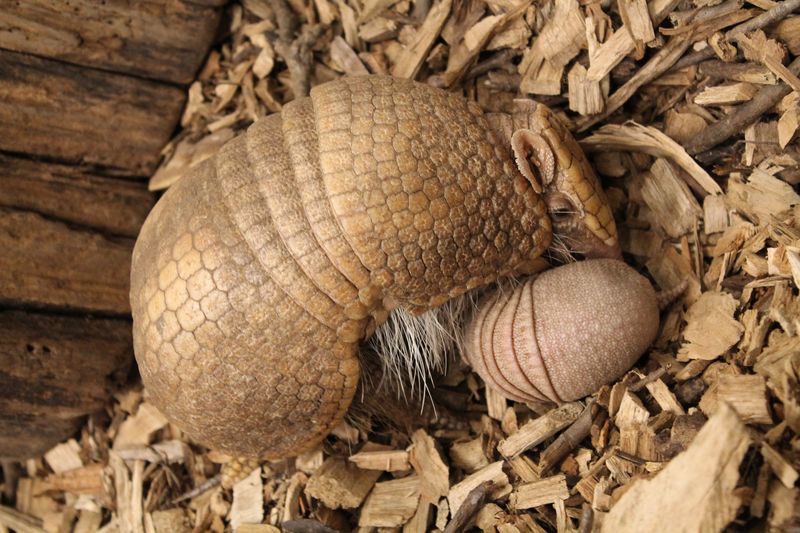 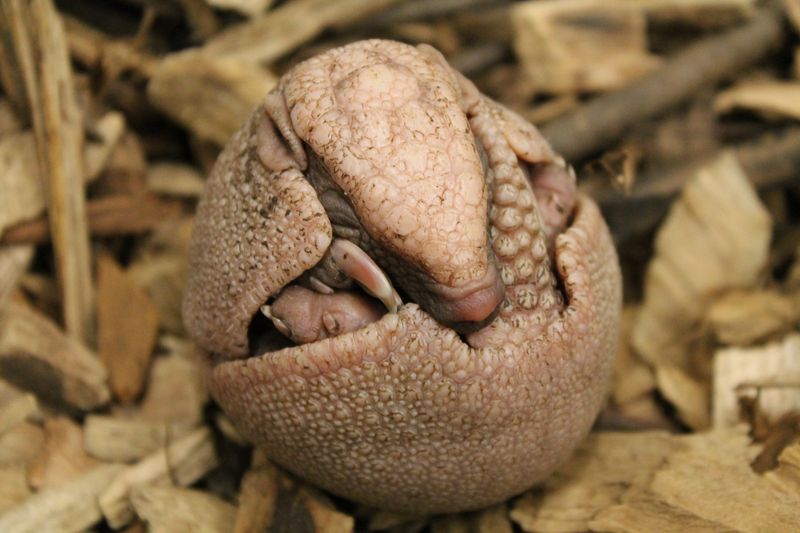 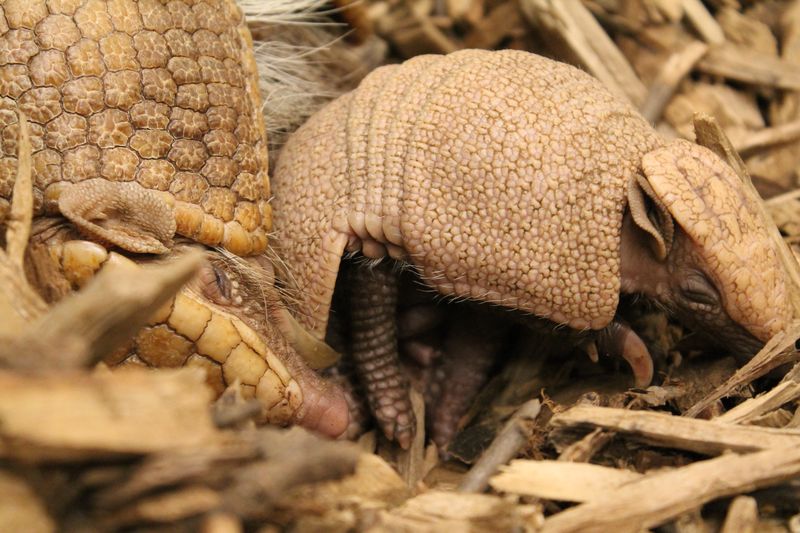 The species, along with the Brazilian Three-Banded Armadillo, is the only armadillo capable of rolling into a complete ball for defense and protection. The three characteristic bands that cover the back of the animal allow it enough flexibility to fit its tail and head together, allowing it to protect its underbelly, limbs, eyes, nose and ears from predators. The shell covering its body is armored and the outer layer is made out of keratin, the same protein that builds human fingernails.

Gestation for an armadillo lasts 60 to 120 days, depending on the species. Some species, such as the Southern Three-Banded Armadillo, will have litter sizes that range from one to eight. The young are born with soft, leathery skin, which hardens within a few weeks. They reach sexual maturity in three to 12 months, depending on species.

Continue reading "Topeka Zoo “Gets ‘Round” to Announcing Armadillo Birth " » 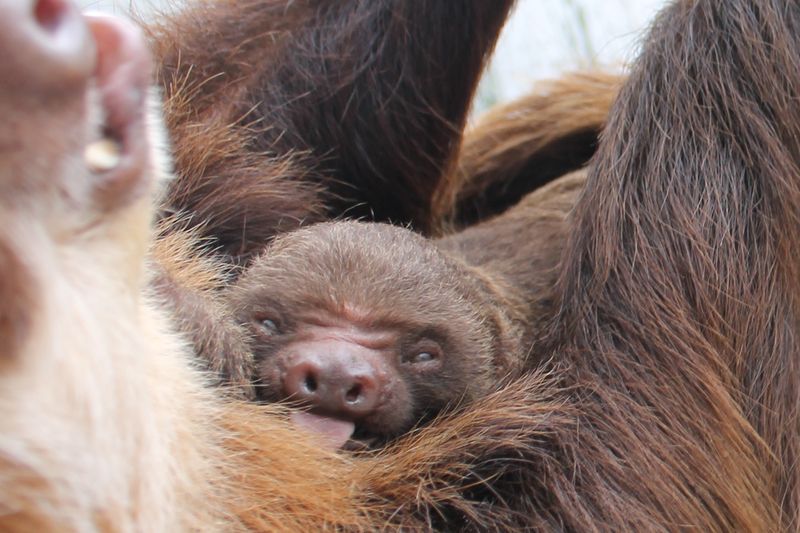 A baby Hoffmann’s Two-Toed Sloth made its public debut, recently, at the Topeka Zoo. 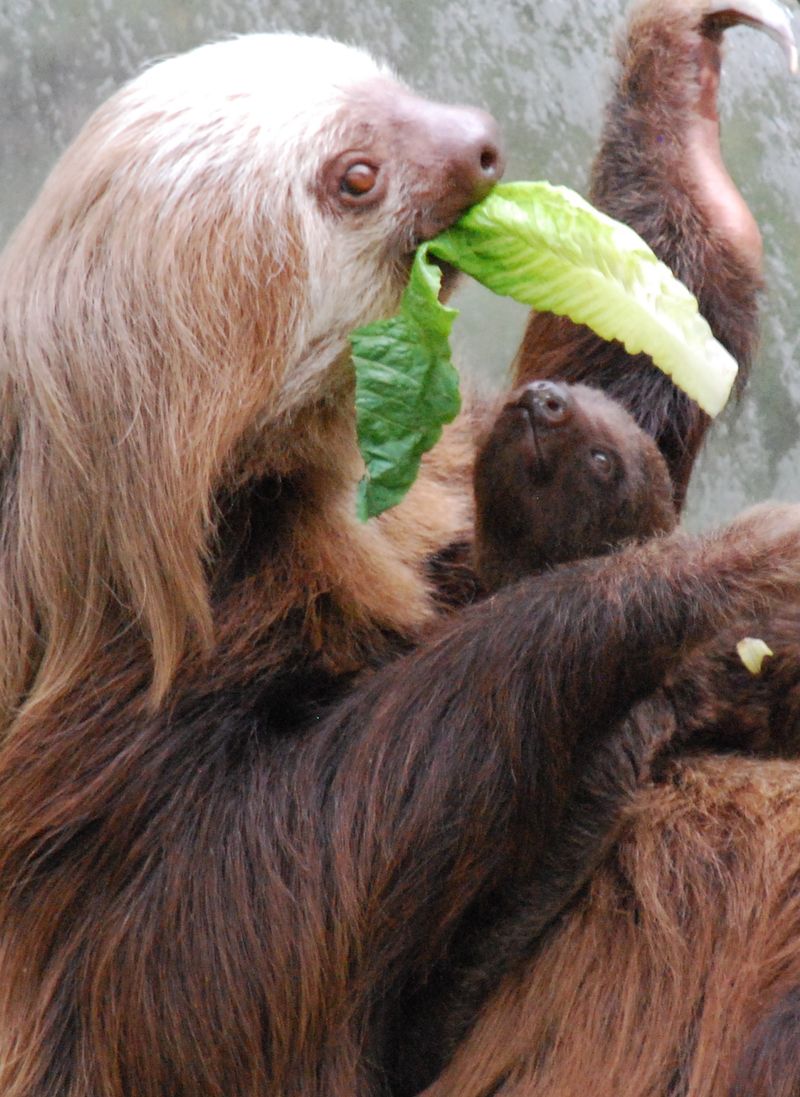 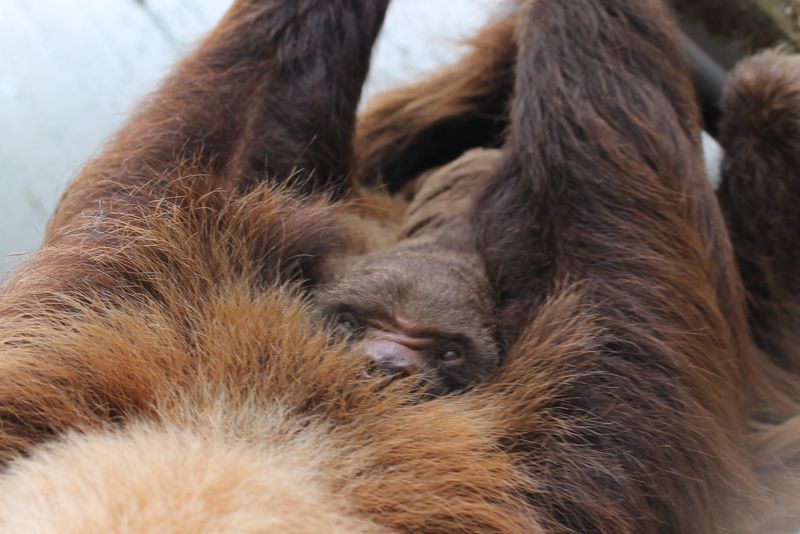 The sloth was born November 20th to mother, ‘Jackie’, and father, ‘Mocha’.  Zoo staff had been closely monitoring Jackie’s pregnancy and had been tracking the growth of the baby via ultrasound. Their excellent zoo and veterinarian staff worked hard to train Jackie to allow them to do an ultrasound on a weekly basis. Gestation for sloths is about 11 ½ months. This is the thirteenth time for Jackie to give birth at the Topeka Zoo, but it is the first offspring for father, Mocha.

It will be a little bit longer before staff can determine the sex, but the baby and mother are doing well. They now make their home in the Zoo’s Rainforest exhibit. For now, the baby is content to snuggle deeply into the fur on mom’s chest, as she makes her way, slowly through the trees of the exhibit.

Hoffmann’s Two-Toed Sloths are native to Central and South America. They are largely nocturnal and arboreal animals, primarily found in rainforests and deciduous forests. They are classified as “Least Concern” on the IUCN Red List. Their main threat in the wild is, believed to be, habitat destruction. 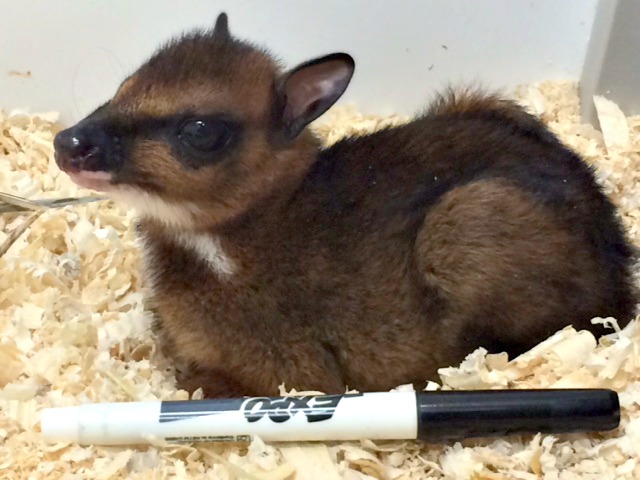 Not much bigger than a Sharpie marker, a baby Greater Malayan Chevrotain was born at the Topeka Zoo on October 16.

This fawn, born to parents Nabisco and Wilma, is the second ever born at the Topeka Zoo. 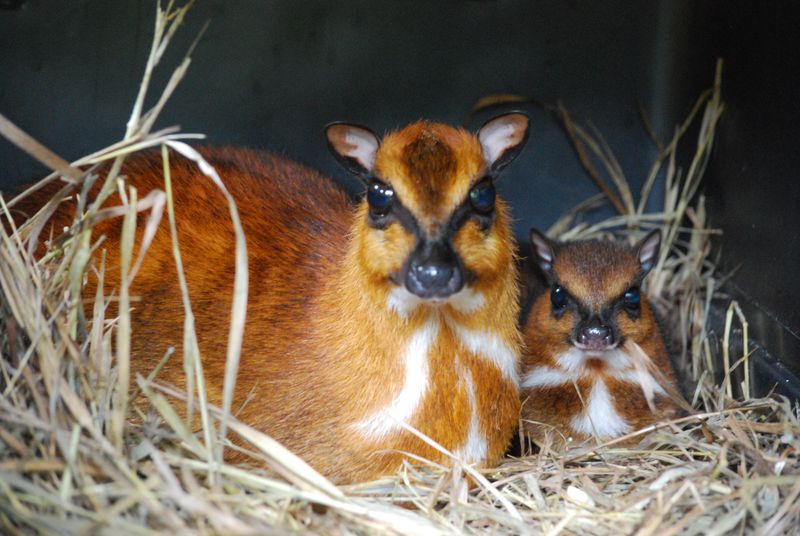 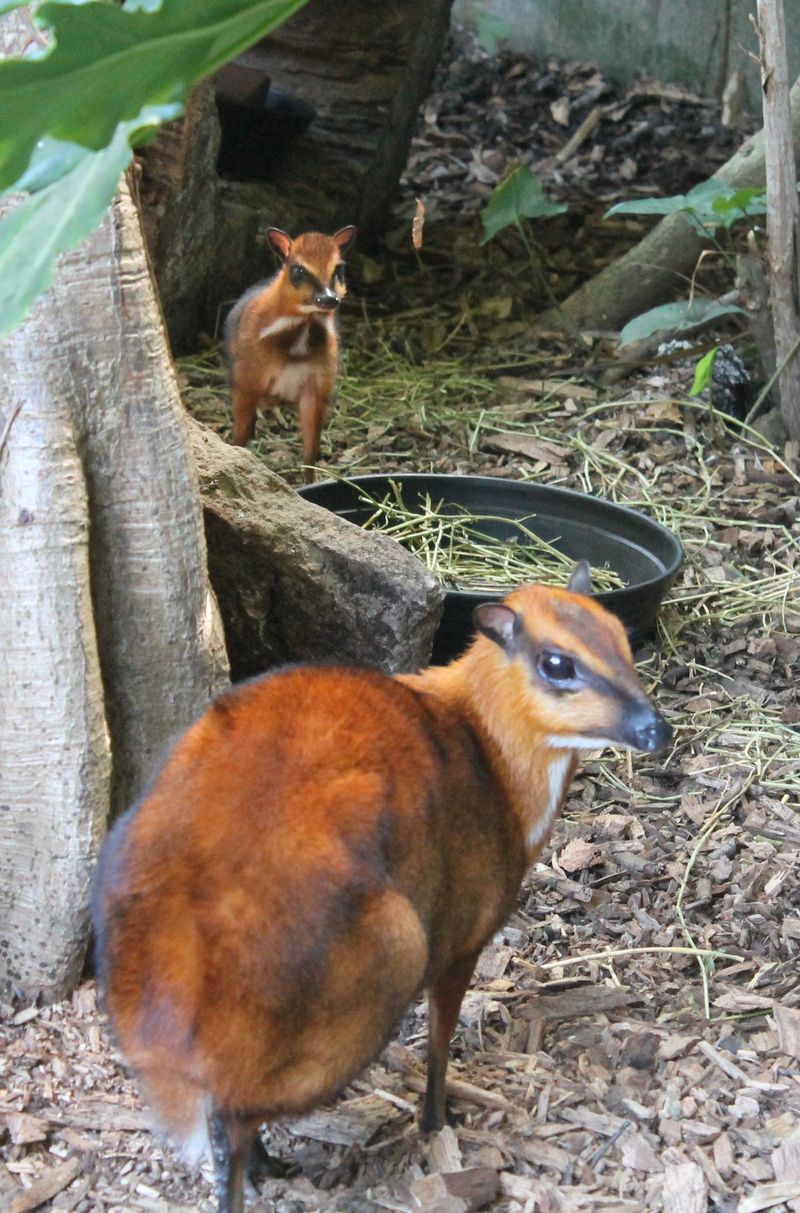 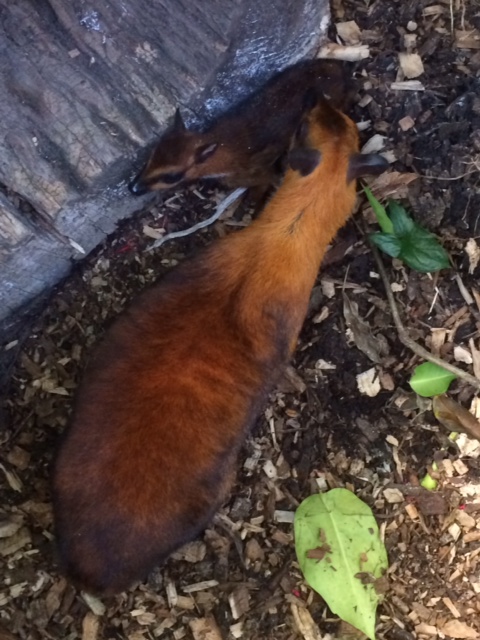 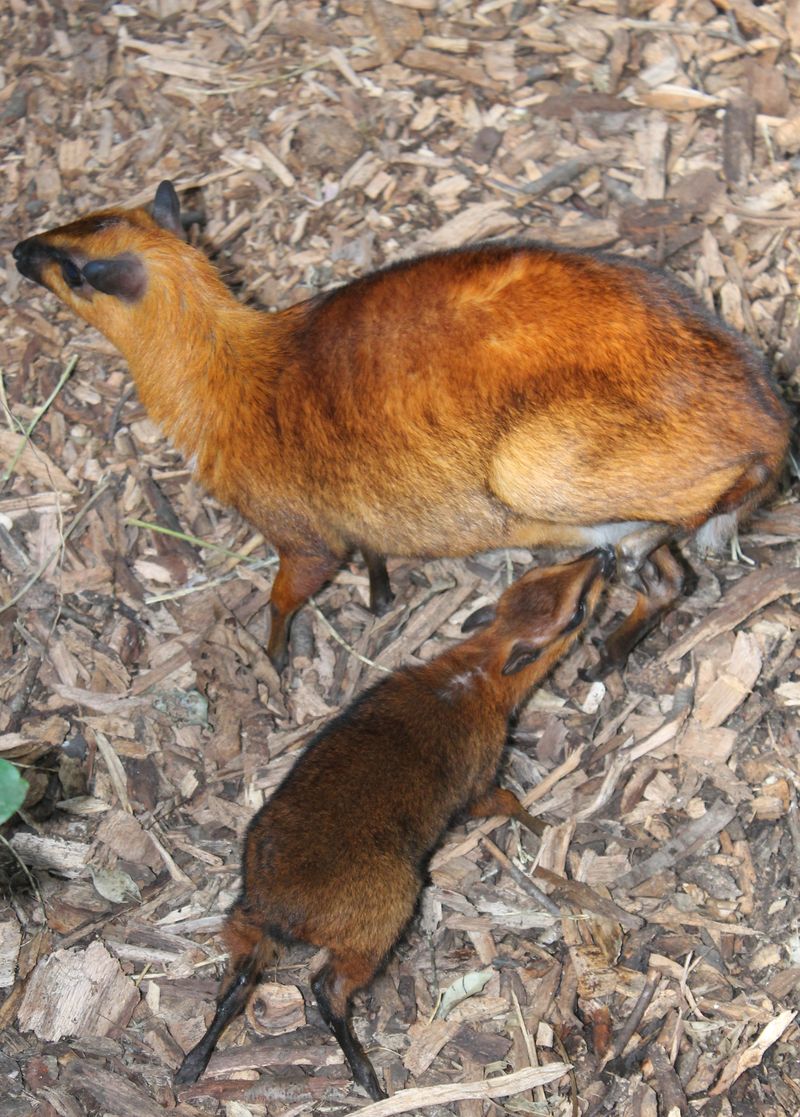 With legs about the size of pencils, adult Chevrotains weigh only 10-13 pounds.  Males have small curved tusks.  This species is sometimes called the Mouse Deer, though they are not true deer.

These ungulates are native to Indonesia, Thailand, the Philippines, and Malaysia, where they dwell in forests and feed on fruit and berries.  Threats from overhunting and deforestation have caused this species to decline in the wild.

UPDATE: Topeka Zoo's Tiger Cubs Have Mom by the Tail 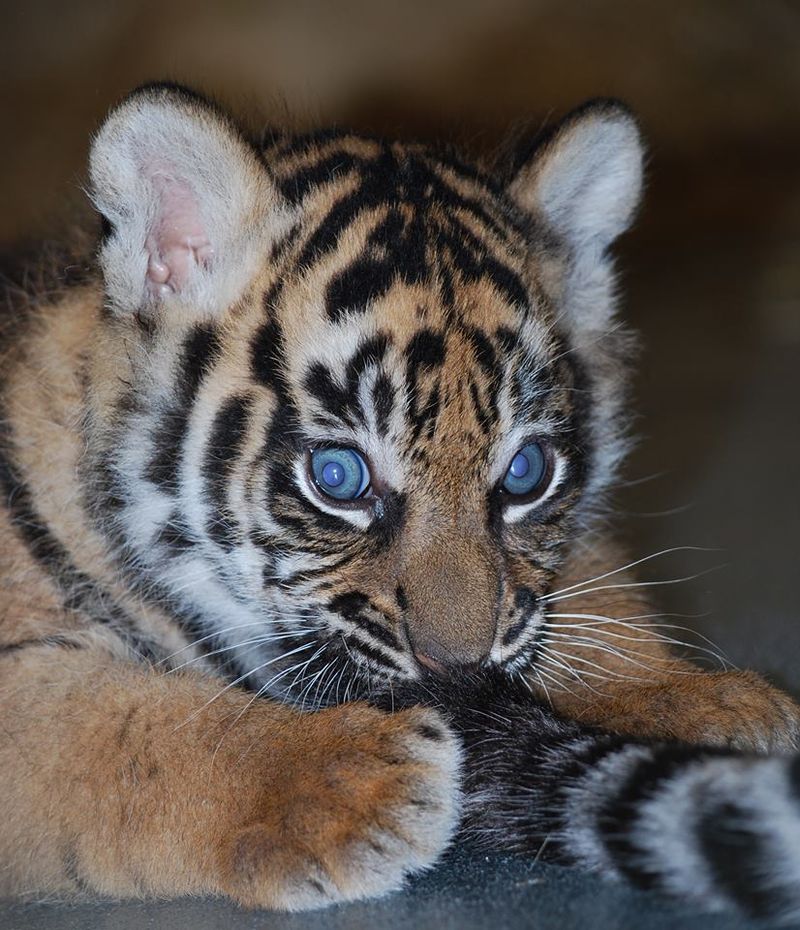 Topeka Zoo’s trio of Sumatran Tiger cubs, born on May 4, are becoming more active by the day!  Their favorite toy?  Mom’s tail! 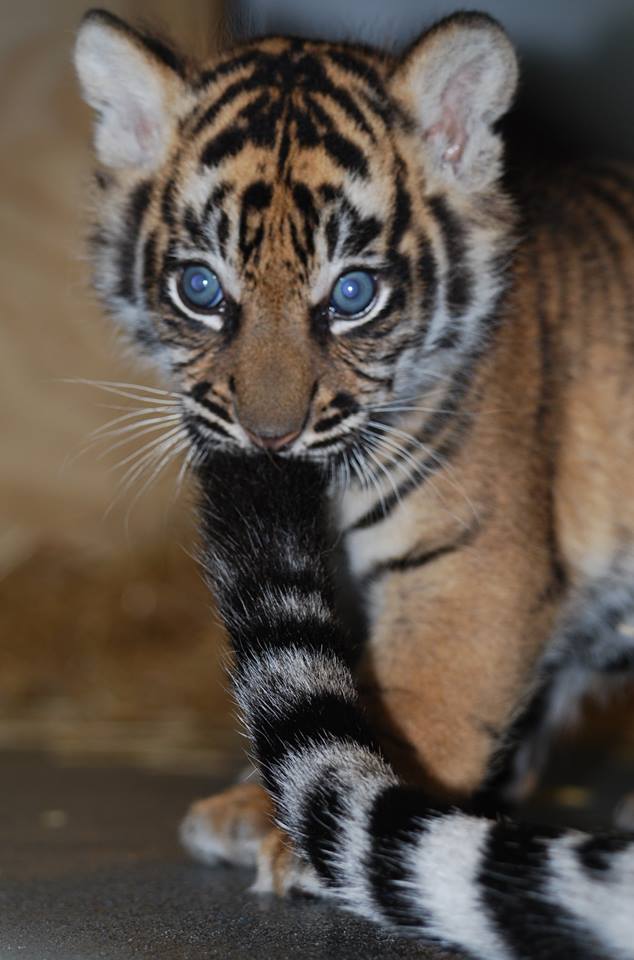 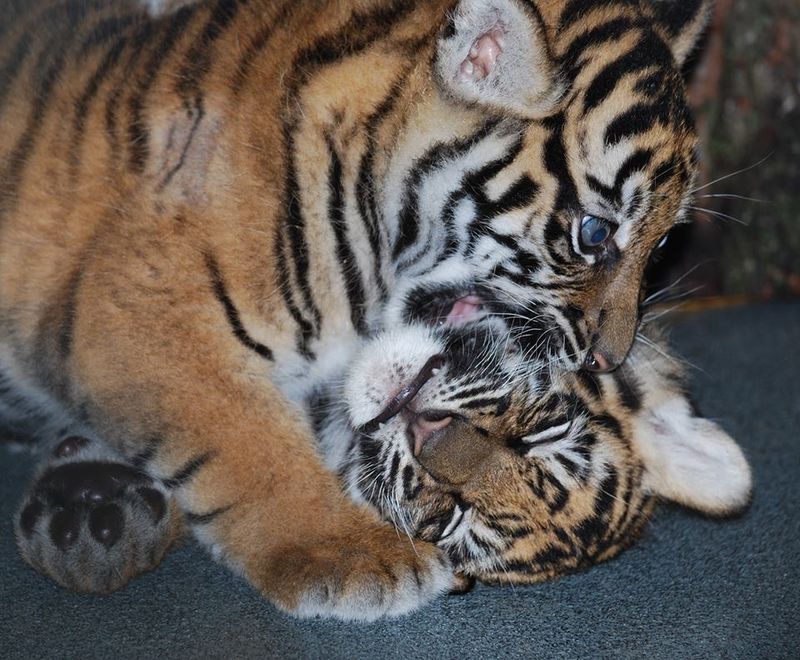 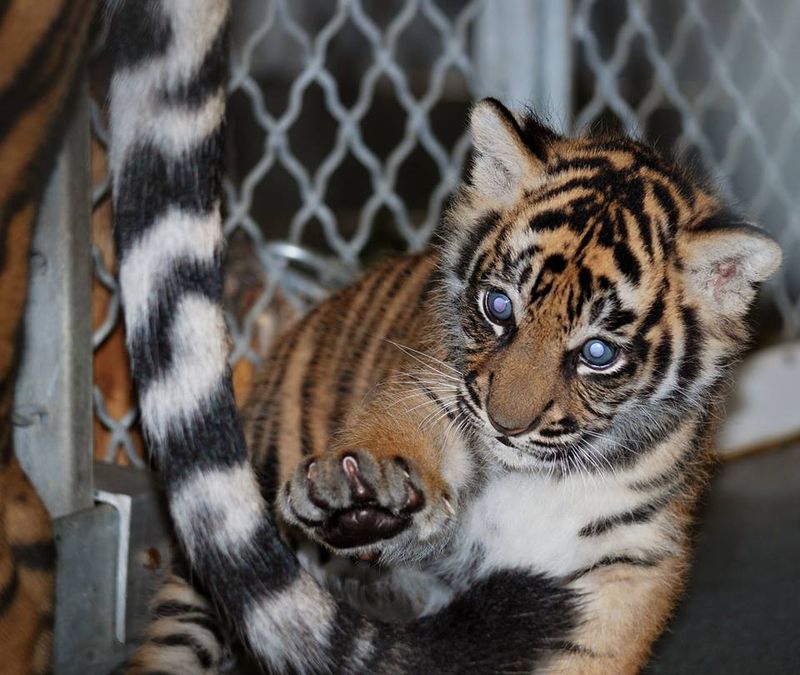 ZooBorns introduced the cubs in May when they were just over a week old.  The three female cubs soon outgrew their baby scale, and now wrestle and play at every opportunity to hone their survival skills.  Though not yet as fierce as an adult Tiger, the cubs do their best to attack broom handles, rubber boots, and of course, each other, as seen in the videos.

Mom Jingga continues to be an excellent mother for her cubs.  These female cubs are valuable to the zoo-managed population of this Critically Endangered species.  Fewer than 500 Sumatran Tigers remain in the wild in Indonesia.

See more videos of the cubs below.