Love Is In The Air At Belfast Zoo This Valentine’s With The Arrival Of A Tiny Titi Monkey!

This is the sixth offspring for the couple since they arrived at Belfast Zoo in 2010. Inca will be taking it easy this Valentine’s Day while Aztec has his hands full, as it is the male titi monkey that takes on the lion’s share of the childcare duties. 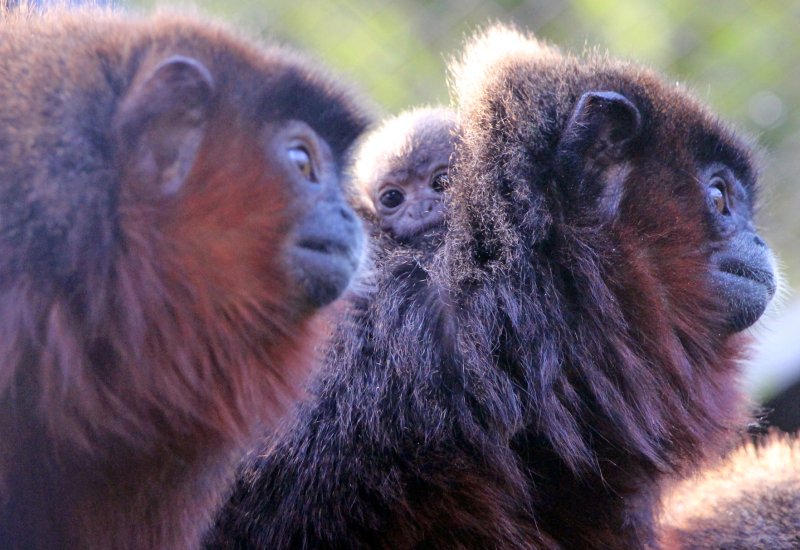 Unlike most other primates, coppery titi monkeys are very attentive fathers. They do the majority of the carrying, only handing the infant over to the mother for nursing.
The infant will cling to Aztec for approximately four to five months so it will be some time before the keepers are able to confirm the gender of the infant. 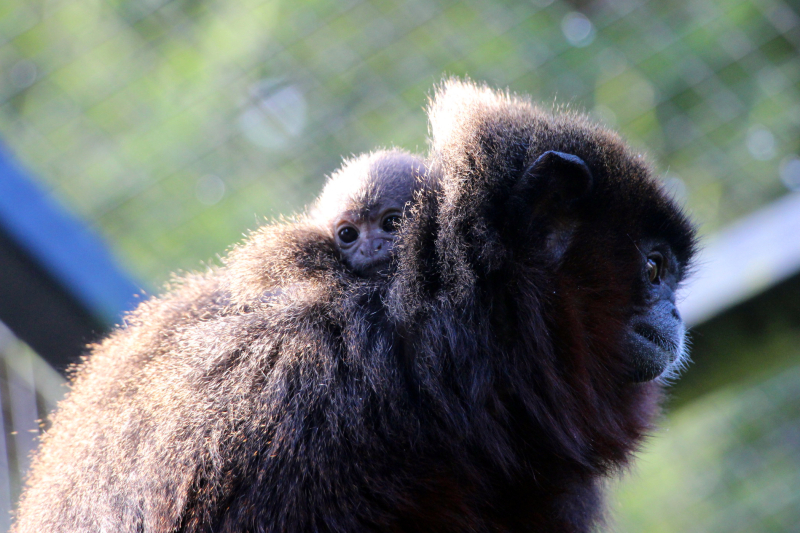 Continue reading "Love Is In The Air At Belfast Zoo This Valentine’s With The Arrival Of A Tiny Titi Monkey!" » 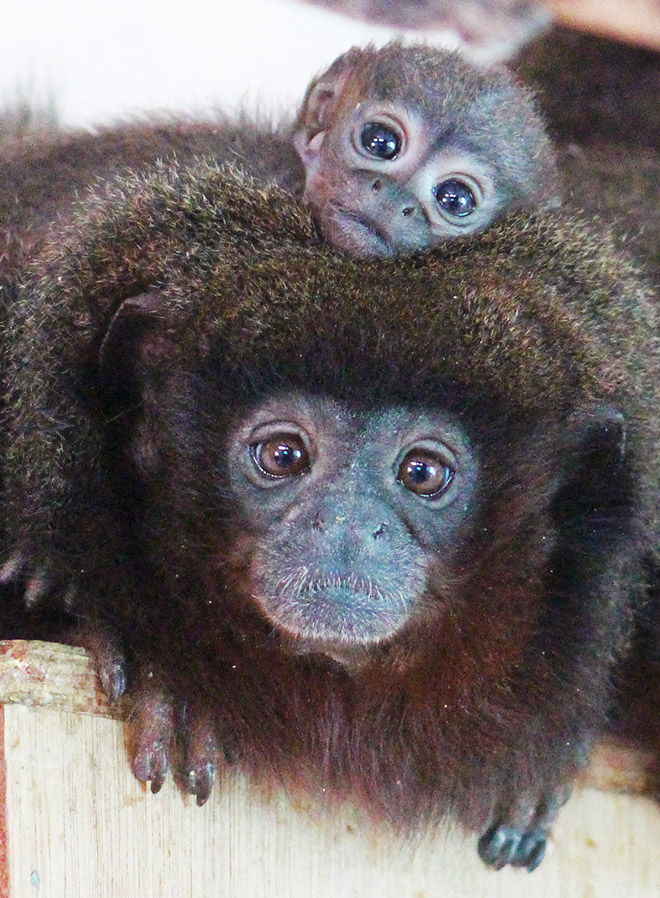 Belfast Zoo is celebrating the birth of a tiny Red Titi Monkey. The latest arrival was born to mum, Inca, and dad, Aztec, on January 26.

Although Inca has her hands full, Aztec is willing and able to help, as male Titi Monkeys play a very active role in parenting and are the main childcare providers.

Aztec can be seen carrying the infant on his back and returning it to mum in time for nursing. The infant will cling to Aztec and Inca for approximately four to five months and, for this reason, keepers have been unable to confirm the sex of the latest arrival.

Zoo curator, Julie Mansell, said, “Belfast Zoo has been home to Red Titi Monkeys since 2010, when Inca and Aztec arrived from London Zoo and Blackpool Zoo respectively, as part of the collaborative breeding programme. Red Titi Monkeys are an unusual primate, as they are monogamous and mate for life. Aztec and Inca can often be seen sitting or sleeping, with their tails intertwined. The pair welcomed their first daughter in July 2011 and have continued to build their family in subsequent years. With the latest arrival, Belfast Zoo is now home to a total of six Red Titi Monkeys.” 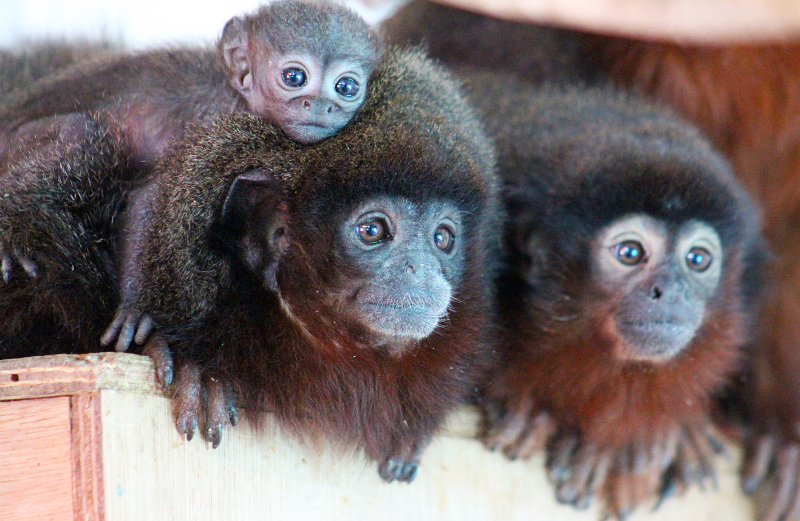 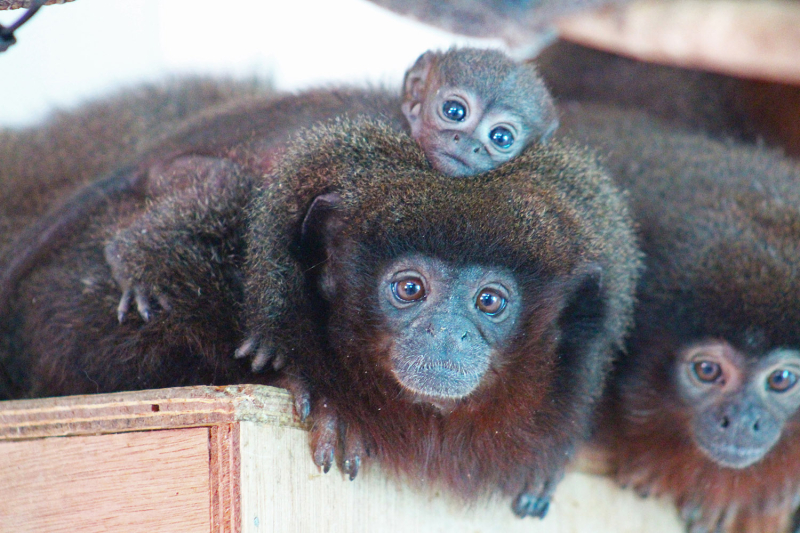 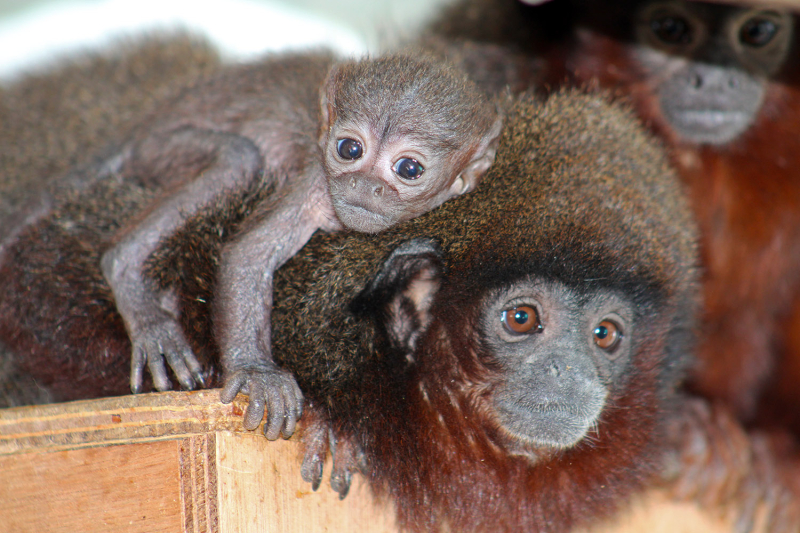 As their name suggests, the Red Titi Monkey (Callicebus cupreus) has red, fluffy fur and a small grey face. Also known as ‘Coppery Titi Monkey’ or ‘Coppery Titi’, this primate species is found in the rainforests of South America including Brazil, Bolivia, Colombia, Venezuela and Peru.

This Red Titi Monkey is currently listed as “Least Concern” on the IUCN Red List of Threatened Species. The species’ relatively large range in a pristine region of the Amazon, and no known major threats have influenced the decision to classify the species at that level.

Zoo manager, Alyn Cairns, said, “It’s the perfect time to visit Belfast Zoo as, for the month of March, we will be offering some ‘zooper’ special offers. If you are planning to visit, you can book your discounted adult and concession tickets on our website. We are also offering up to 25% off penguin, giraffe and lemur experiences, up to 24% off elephant keeper for a day experiences and up to 25% off all animal adoption packages. You can find out more about our ‘March Madness’ offers at www.belfastzoo.co.uk .” 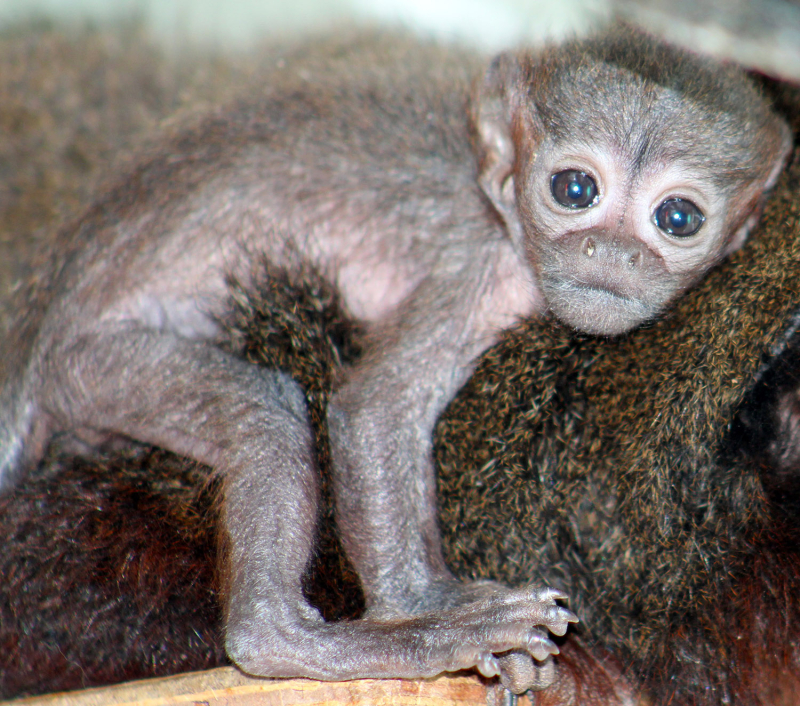 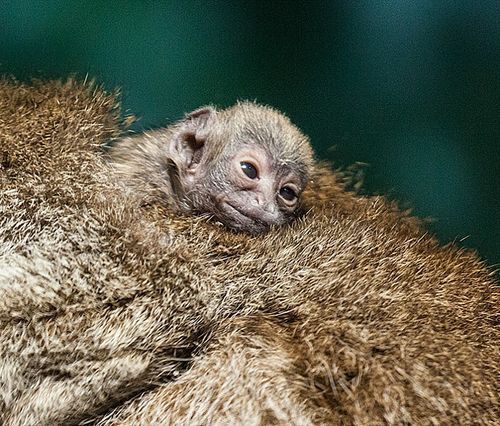 Even though the newest arrival at Lincoln Park Zoo only weighs a few ounces, the diminutive Bolivian Gray Titi (pronounced tee-tee) Mmonkey is a big deal. The baby, born August 18, is the ninth offspring for its parents, and its mother is the oldest of her species to give birth in a North American zoo.

Animal care staffers do not know yet if the little one, which joins a small population of only around 50 other Bolivian Gray Titi monkeys in accredited zoos nationwide, is a boy or a girl – but they do know it is adorable!

“The baby is spending most of its time nestled in the thick fur on mom’s back, but we do get a glimpse of its little face peeking up now and then,” said Curator of Primates Maureen Leahy. “Dad and the siblings are playfully curious with the new arrival, and the whole group is responding appropriately to the addition.” 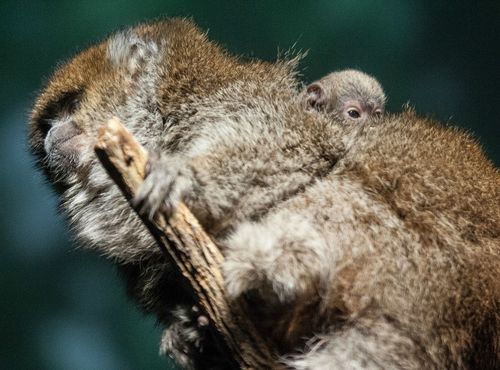 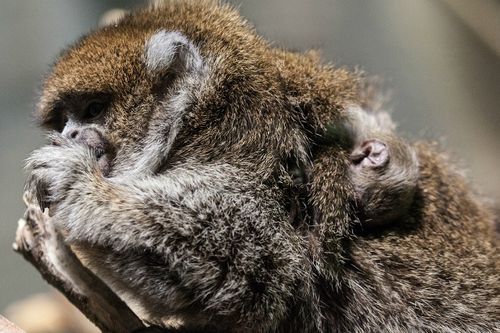 Mom Delasol, 21, and dad Ocala, 15, are well-versed in the ways of parenting. Just last October they welcomed their eighth offspring together, a male aptly named Ocho, the Spanish word for eight. They are recommended to breed by the Titi Monkey Species Survival Plan (SSP) and are one of the most successful pairs on record.

As the oldest mother in the SSP to produce healthy offspring, Delasol is a testament to the high quality animal care at Lincoln Park Zoo and the special attention paid to aging animals. The birth is particularly significant because Bolivian Gray Titi monkeys are declining in their native South America due to habitat loss and the illegal pet trade.

Titi families are known for being tight-knit, and fathers and siblings pitch in with childcare duties early on. The Titi Monkeys at Lincoln Park Zoo can often be seen sitting closely together on the same branch and intertwining their tails as a bonding behavior.

Lincoln Park Zoo is celebrating the birth of a primate called the Bolivian gray titi monkey. Native to South American tropical forests, there are less than 50 individuals in accredited zoos. Lincoln Park Zoo has one of the most successful breeding pairs. 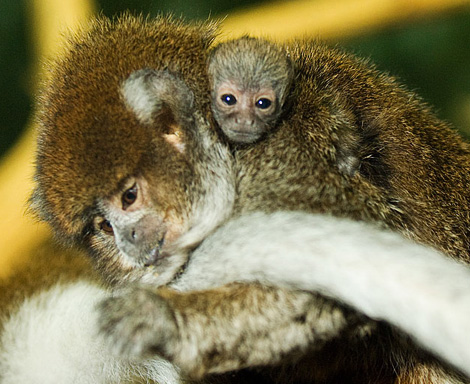 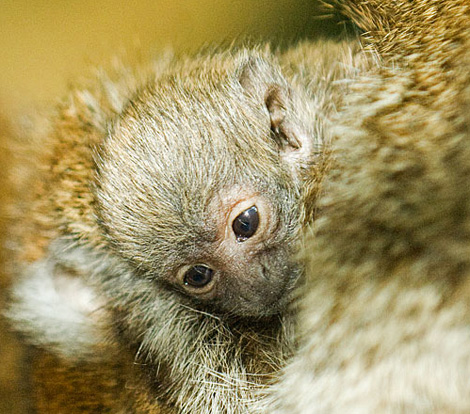 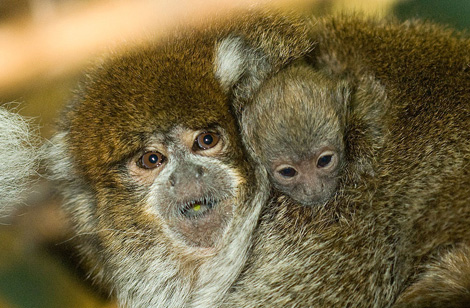 The newborn, which has yet to be sexed or named was born on April 9. This is the seventh offspring for parents Delasol and Ocala, and the mother and infant are reportedly doing well.

On the morning of October 11th, staff at the Salisbury Zoo were surprised to find a tiny newborn Titi monkey cliging to dad. This guy looks a little sour. Maybe he expected fancier digs. 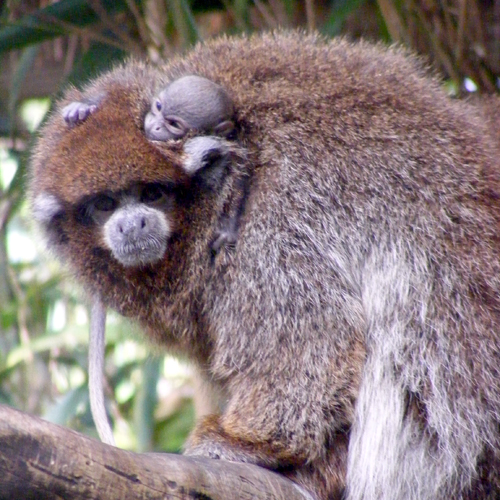 Here is another Titi monkey born back in March of this year at the Lincoln Park Zoo in Chicago. He looks much more content. 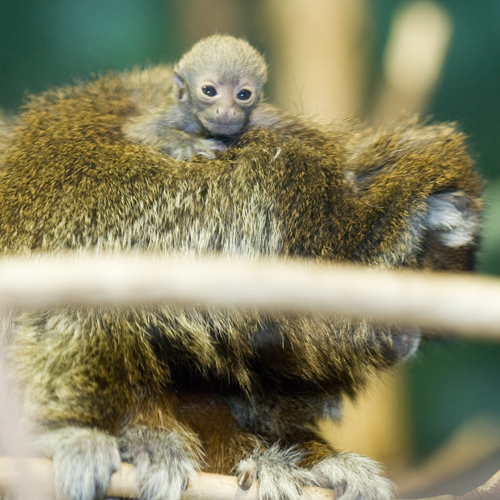 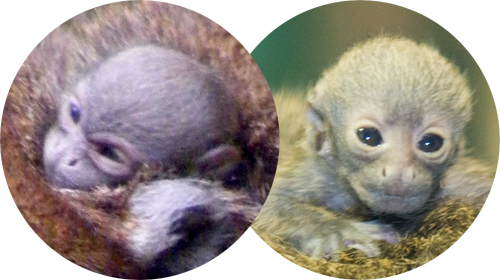