Zookeepers at ZSL London Zoo have shared the first footage of an adorable Christmas arrival - a Critically Endangered Sumatran tiger cub, born at 02:19 on Sunday 12 December.

Remarkable footage captured by the Zoo’s hidden ‘cubcam’ shows ten-year-old mum Gaysha cleaning and feeding the rare newborn just hours after the birth - before the determined youngster takes its first wobbly steps on the soft straw of their cosy behind-the-scenes den. 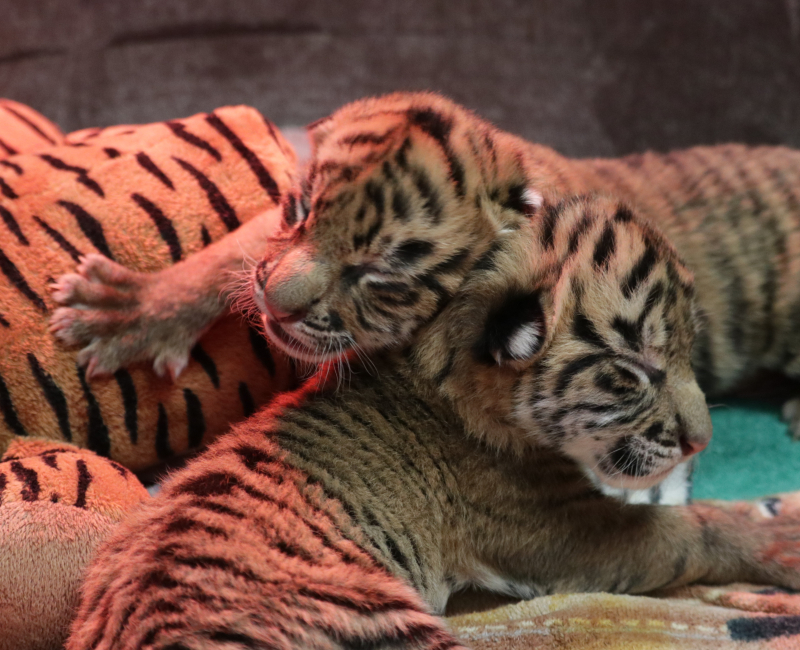 Suki had milk production issues, similar to when she gave birth to Sumini, which meant that the cubs were not able to nurse properly. Zoo officials were prepared for this possibility and were able to act very quickly to intervene and ensure the cubs’ survival. Just like with Sumini, these cubs are receiving around-the-clock care from an incredible team of zoologists and veterinarians. Both cubs and mom are happy and healthy!

Dallas Zoo hasn’t decided on names for these two little ones just yet, and they will remain behind the scenes for now. With only an estimated 400-600 Sumatran tigers remaining in the wild, each birth is a major win for this critically endangered species, and the Zoo is  thrilled to be able to contribute to the population once again with these adorable new additions.

Keepers at the wildlife conservation charity say the trio’s personalities are developing as they grow bolder and more confident, often entertaining visitors with their playful antics.

Keith Gilchrist, animal collection manager at Highland Wildlife Park, said, “It has been wonderful to see our three cubs and mum Dominika grow over the past six months. At half a year old, the cub’s characters are starting to shine.

“Nishka is the most confident around us and is always chuffing in the hope of more meat chunks.

“Layla follows in her footsteps as the two are always together, play fighting and keeping mum on her toes.

“Little Aleksander is more reserved and spends the most time with Dominika, but he is slowly becoming braver, exploring more and playing with his sisters.

“Amur tiger family groups do not usually live together in the wild and Dominika is still fiercely protective of the cubs, so dad Botzman is living separately for now.”

The public can help care for the Amur tiger family at the park and support wildlife conservation around the world by adopting the species this Christmas at bit.ly/AdoptAmurTiger. 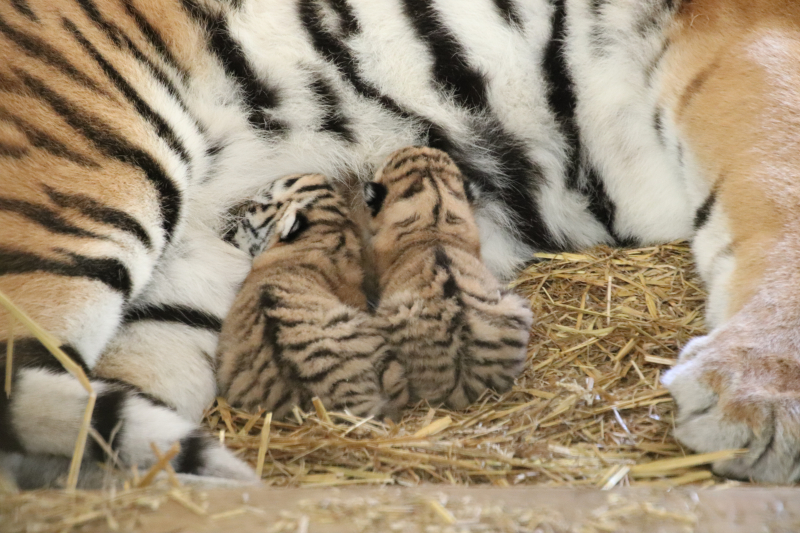 Sumini was born on August 2, 2021, and is the first critically endangered Sumatran tiger cub born at the Dallas Zoo since 1948. Unfortunately, her mother, Suki was not producing enough milk, so zoo staff made the critical decision to intervene, and hand raise her to ensure her survival.

TULSA, Okla. – A female Malayan tiger cub is doing well after being born at the Tulsa Zoo earlier this month. The announcement comes on International Tiger Day.

The cub was born on July 11, 2021, to mother, Ava, and father, Tahan, through Tulsa Zoo’s ongoing participation in the Association of Zoos & Aquariums (AZA) Malayan Tiger Species Survival Plan (SSP). This program works to ensure a sustainable population of these animals in our care. Malayan Tigers are native to the Malay Peninsula, and are the national animal of Malaysia, but there are fewer than 250 in the wild due to threats such as habitat loss and poaching.

A litter of three endangered Amur tiger cubs has been born at the Royal Zoological Society of Scotland’s (RZSS) Highland Wildlife Park. 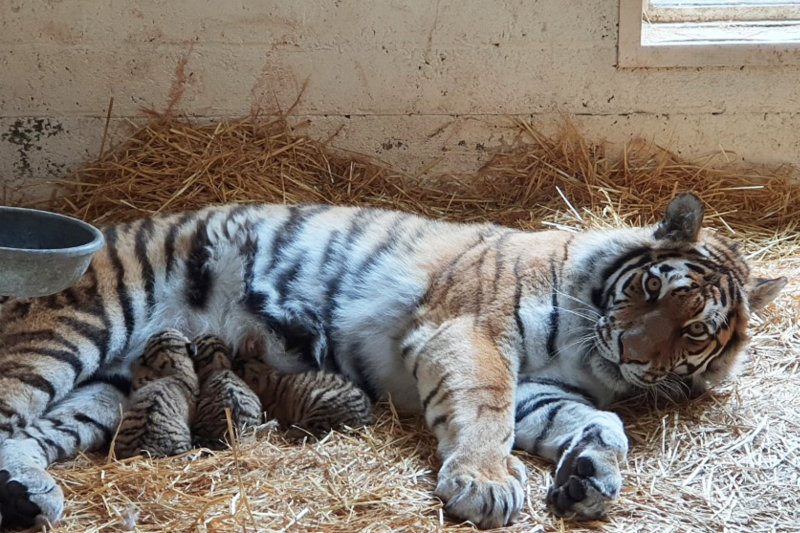 Staff at the wildlife conservation charity say the one-week-old cubs, born on Tuesday 18 May, are doing well so far but they remain cautious at this early stage.

While the tiny triplets are being nursed by mum Dominika away from public view, visitors to the park can still spot dad Botzman who will be gradually introduced to the cubs as they grow older.

Vickie Larkin, carnivore team leader at Highland Wildlife Park said, “We are really excited about our new arrivals but the first few weeks of a cub’s life are crucial, so we are keeping public viewing closed for now to give Dominika and the youngsters lots of peace and quiet.

“The cubs’ eyes will start to open any day now and in the coming weeks they will be weighed and sexed during their first health check and named shortly after. Amur tigers grow quite quickly, increasing almost four times in size within the first month of their life, but they will remain dependent on their mum for at least 15 months. We hope visitors will start to see them out and about towards the end of July.

“Dominika is a very attentive mother and it is beautiful to see her given the chance to display these natural behaviours again.”

As well as being part of the endangered species breeding programme for Amur tigers, with Dominika giving birth to a previous litter in 2013, the charity has supported tiger conservation in Nepal by developing methods to evaluate tiger diets within the RZSS WildGenes laboratory based at Edinburgh Zoo.

Vickie continued, “There are just 500 Amur tigers remaining in the wild, so our adorable cubs represent an important contribution to the future of this endangered species which is at risk of extinction due to extensive habitat loss and poaching.”

Once the cubs are old enough for visitors, one lucky winner and their loved ones could have the chance to feed the tiger family by entering an RZSS prize draw to help raise funds for Scotland’s Wildlife Discovery Centre, a new visitor experience at the park. Entry is just £5 and closes on 31 May, with the prize valid until March 2022 - find out more at crowdfunder.co.uk/NightAtHighlandWildlifePark 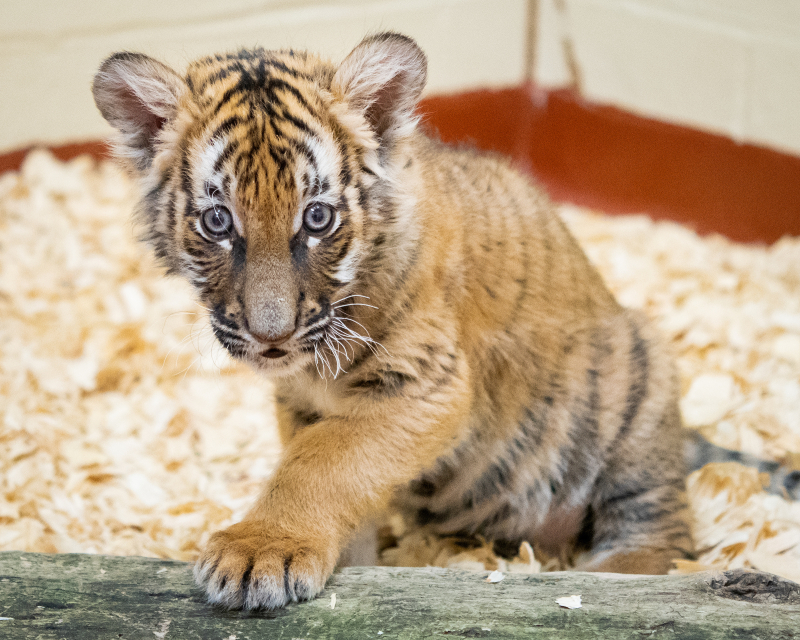 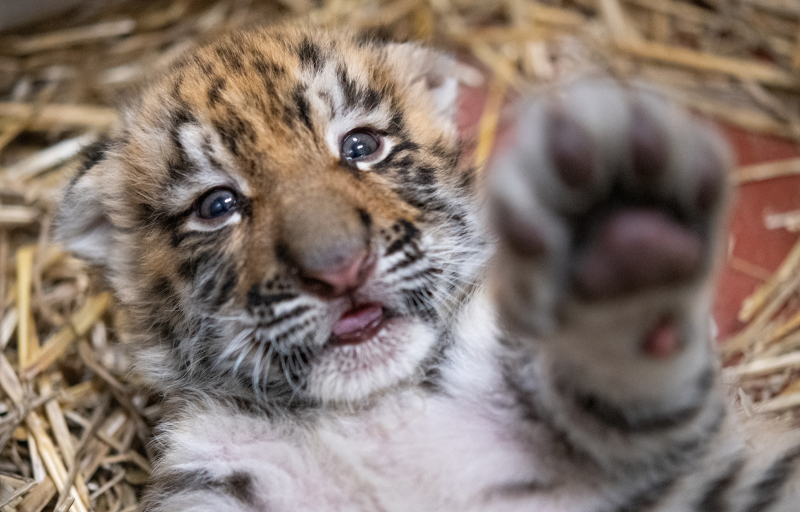 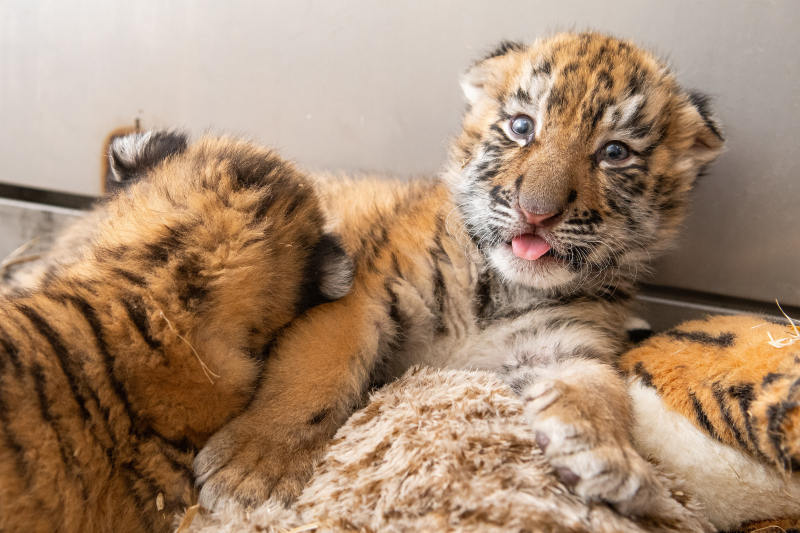 It's a triple header and ZooBorns invites you to "Squee"-For-Three. This video features the baby Tiger trio at  @Palm Beach Zoo & Conservation Society , A Colubus Monkey infant at  @Gladys Porter Zoo , and The The Living Desert's recently emerged Yellow-footed Rock Wallaby.