A new star in stripes… and spots! An endangered Malayan tapir has been born at Chester Zoo – giving an important boost to conservation efforts to protect the species.

A rare Malayan tapir has been born at Chester Zoo in what has been hailed as an “important moment” for the conservation of the endangered species.

The female calf, which has been named Nessa, arrived to parents Margery (10) and Betong (10) in the early hours of Wednesday 30 November, weighing just 9kg. It followed a 13-month-long (391-day) pregnancy.

Chester Zoo is one of just two British zoos currently caring for the Malayan tapir – a species listed as endangered on the International Union of Conservation of Nature’s (IUCN’s) Red List of Threatened Species. 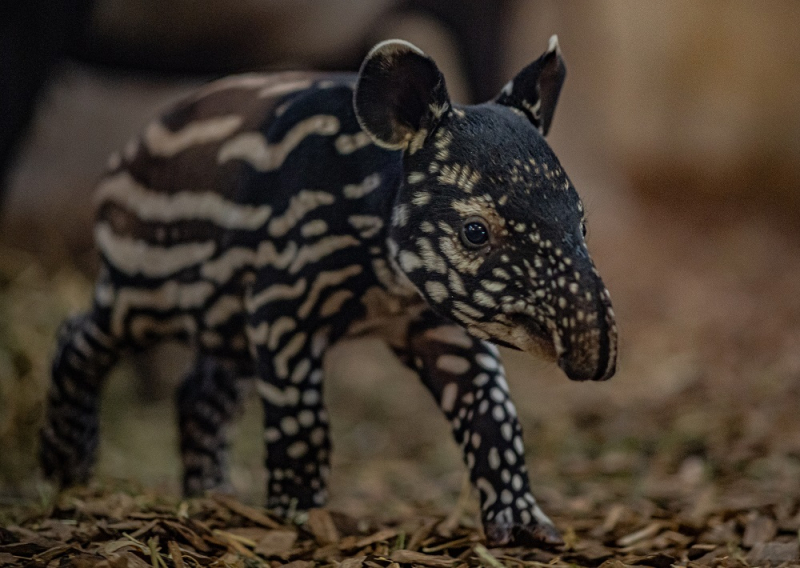 Brookfield, Ill. — Guests visiting Brookfield Zoo can now see a South American tapir calf, who turned 2 months old on July 22, in his outdoor habitat, located on the north side of Pachyderm House. While getting acclimated to his new surroundings, he, and his mother Sorghum (SOAR-gum) also will have access to their indoor space.

One characteristic that zoogoers will notice are the calf’s white stripes that serve as an excellent camouflage. Baby tapirs are born with the stripes, which will begin to fade in a few months, and are completely gone by 6 months of age. Currently, the male calf weighs approximately 70 pounds. He will reach full size at about 18 months of age and could weigh as much as 500 pounds. 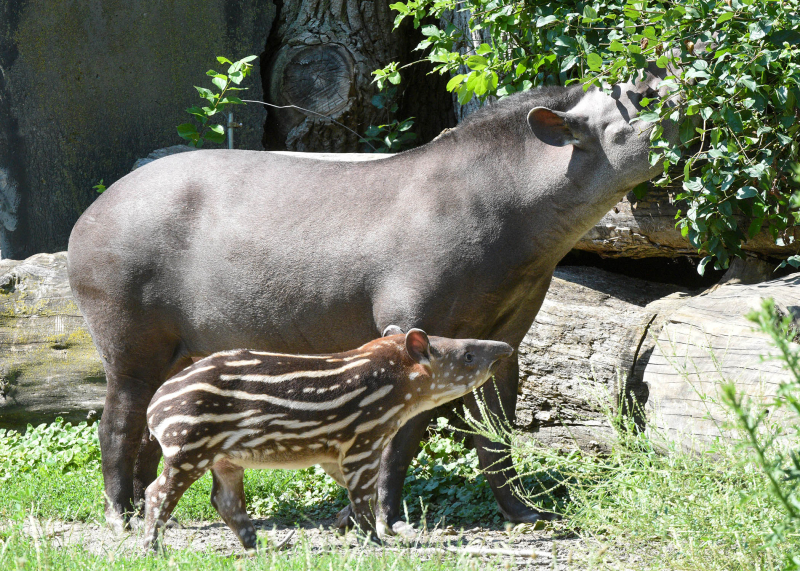 Brookfield, Ill. — The Chicago Zoological Society, which manages Brookfield Zoo, is happy to announce the birth of a male South American tapir calf on May 22.  Beginning, May 26, zoogoers will be able to see 11-year-old mom Sorghum (pronounced SOAR-gum) and her yet-to-be-named calf indoors at the Pachyderm House. Once the weather warms a little, they will have access to their outdoor habitat, located on the north side of the building. 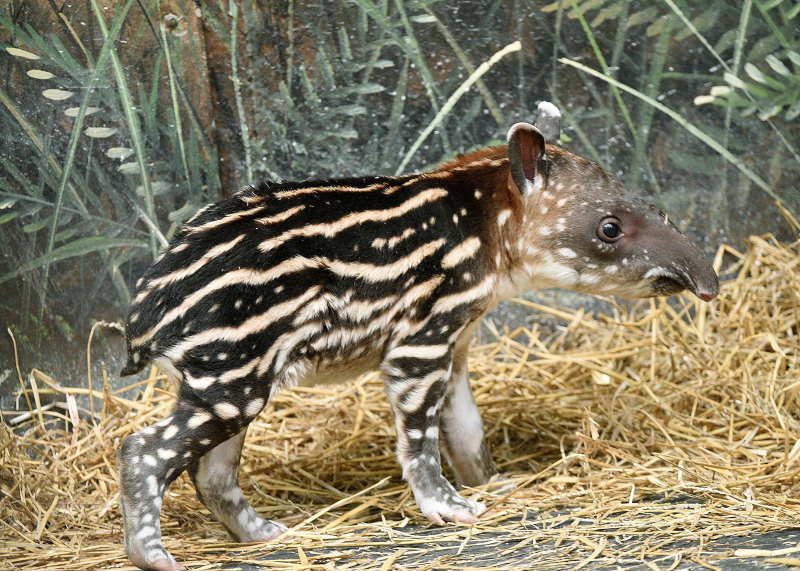 Following a 13-month gestation, Sorghum gave birth to the approximately 20-pound calf. Throughout her pregnancy, the zoo’s veterinary staff was able to monitor the fetus with regular ultrasounds. To accomplish this voluntary behavior from Sorghum, animal care specialists used positive reinforcement to desensitize the 550-pound mother-to-be to the sound of the ultrasound machine, the smell of rubbing alcohol and gel used on the ultrasound probe, and the feeling of the probe on her belly. 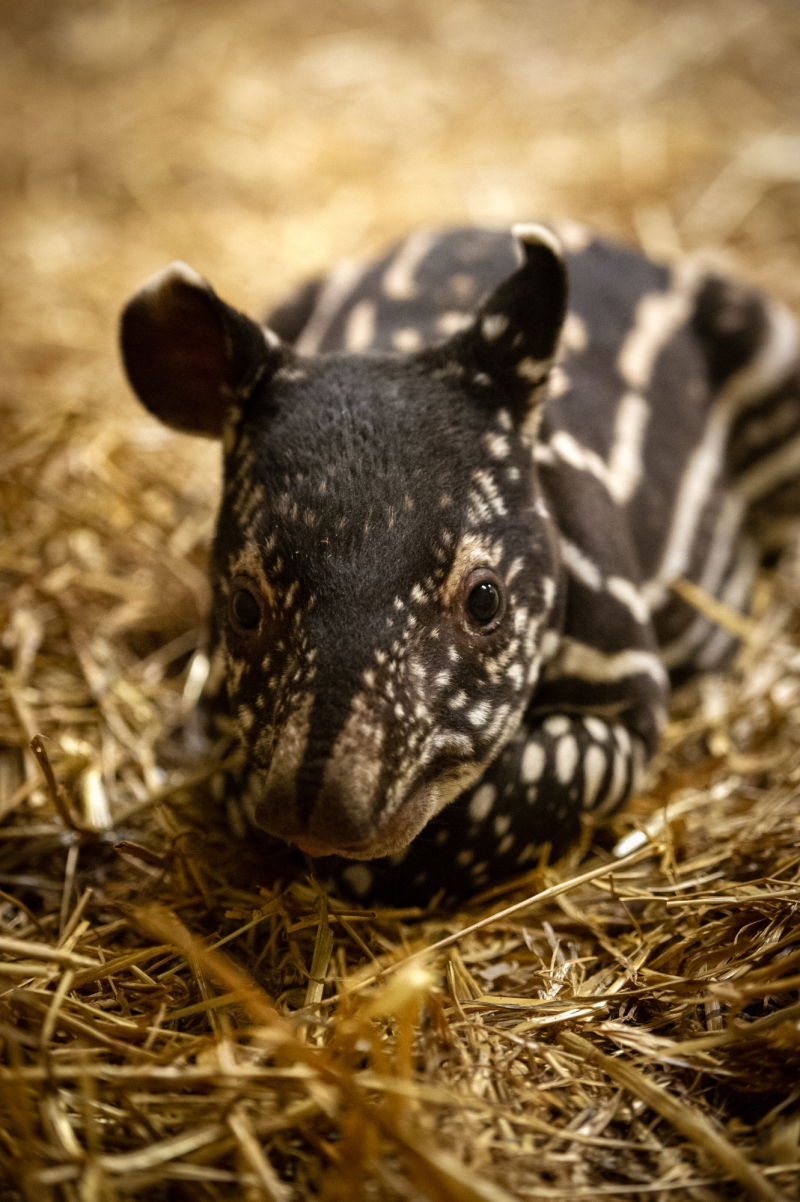 Caretakers determined the calf is a male. The little one is drinking well and already walking around a lot. This is the fourth tapir baby for mother Nakal, and her first son. This is the second offspring for father Baku.

Baby Tapir Gets Off To A Great Start!

Around 1 a.m. on November 2, 3-year-old Baird’s tapir Mia gave birth at Brevard Zoo in Florida! Thanks to a camera system installed in the tapir night house—and the dedication of animal staff watching at home—she could be seen going into labor. Director of Animal Programs Lauren Hinson, Expedition Africa Supervisors Chelsea Herman and Kim Castrucci and Rainforest Revealed Supervisor Michelle Ferguson jumped in their cars and drove straight to the Zoo (prepared to step in if necessary), discovering that Mia had given birth after a very short six minutes of labor!

Continue reading "Baby Tapir Gets Off To A Great Start!" »

Vinnie the Banded Palm Civet
Nashville Zoo
Vinnie the Banded Palm Civet was born to a pair of civets living behind the scenes at the Zoo and is just about a month old. Nashville Zoo’s veterinary team is hand-rearing Vinnie. The hope for Vinnie is that he will become an ambassador animal. Civets are nocturnal so Vinnie spends the majority of his day napping. He will be hand-reared until he is fully weaned, and the vet team estimates that it will be in about a month. Full-grown Civets can weigh around 6 pounds. You can come see Vinnie in the window of the neonatal room at Nashville Zoo's HCA Healthcare Veterinary Center.
Amur Leopard Cub
Santa Barbara Zoo
On August 6th at 4:05 am, the Santa Barbara Zoo’s Amur leopard, Ajax, gave birth to her first cub, and the two are doing well and currently bonding behind the scenes. The cub is a female and has been given the name Marta by her Premier Foster Feeder sponsors, Marta Holsman Babson and Henrietta Holsman Fore. The cub weighed in at 517 gms (1.1 lbs) at its first medical examination on August 6.
This is the first Amur leopard birth at the Santa Barbara Zoo in more than 20 years. Ajax is the most genetically valuable female Amur leopard in North America currently, so this first cub from her will contribute valuable genetics to the population in human care. Amur leopards are the most endangered of all the big cats, with less than 100 remaining in the wild, and the Zoo has been attempting to breed the species for several years now as part of the conservation efforts for this species. This is the fourth litter for Kasha, who arrived at the Zoo in March 2020, just prior to the first coronavirus closure. The pairing of Ajax and Kasha was recommended by the Association of Zoos and Aquariums (AZA) as part of the Amur Leopard Species Survival Plan (SSP), a program to maintain genetic diversity of threatened and endangered species in human care.
Cheetah Cub
Smithsonian’s National Zoo and Conservation Biology Institute
Animal care staff at the Smithsonian Conservation Biology Institute (SCBI) are hand-raising a male cheetah cub for several weeks before placing the cub with a foster cheetah mother at another zoo. The cub was one of a litter of three born to 7-year-old female Sukiri Sept. 16; the other two cubs were stillborn. Keepers report the cub is strong, active, vocal and eating well. The Cheetah Cub Cam is offline as the cub is no longer in the den.
While Sukiri nursed the surviving cub overnight, providing critical warmth, colostrum and hydration, she started to ignore the cub the morning of Sept. 17. She did not appear agitated when the cub was removed by keepers from her yard later that day and continues to behave and eat normally. Sukiri ate the two stillborn cubs, which is not unusual for a carnivore and in line with wild female cheetah behavior as a dead cub invites predators.
Animal care staff are staying around the clock to feed the cub every 2 to 3 1/2 hours in SCBI’s veterinary hospital. The cub is being fed a formula used successfully to hand-raise cheetah cubs at other zoos. In the coming weeks, a female cheetah at another AZA-accredited zoo is set to give birth. At the recommendation of the SSP, this cub will be introduced to that litter pending any other developments.
SCBI spearheads research programs in Virginia, the Zoo in Washington, D.C., and at field research stations and training sites worldwide. SCBI scientists tackle some of today’s most complex conservation challenges by applying and sharing what they learn about animal behavior and reproduction, ecology, genetics, migration and conservation sustainability.
Tapir Calf
Linton Zoo, UK
On Thursday 19th August, Linton Zoo’s female Tapir Tiana gave birth to a healthy female calf after a normal 13-month gestation. We are pleased to say that Mum, Dad and new baby, as yet un-named, are all doing well.
The Brazilian tapir is a large heavily built mammal of a strange prehistoric appearance. The tapir is in fact so well adapted to its environment that it has remained unchanged for about 30 million years. It lives deep in the Brazilian rainforest where, because of the destruction of its habitat and illegal hunting it is has already become extinct in part of its range. The tapir is a shy creature taking to water when threatened where it is able to stay submerged for hours using its long nose to snorkel until such time it feels it is safe to surface. They feed on roots and vegetation but never strip a bush bare of its leaves, zigzagging their way through the undergrowth, conserving the habitat.
Although tapir have survived for millions of years, living in harmony with nature, their future in the wild is by no means secure. A European breeding programme will provide a safeguard against extinction for these wonderful creatures.

The male Baird's tapir calf born at Audubon Zoo on July 2, 2021, is doing well and gaining weight. Born weighing 19.4 pounds, the calf is now up to approximately 31.5 pounds and gaining almost a pound a day. Full grown Baird's tapirs can weigh up to 800 pounds.

Audubon Zoo's three-year-old Baird's tapir Ixchel has given birth to her first offspring, the result of successful breeding with Tybalt, the Zoo's four-year-old male Baird's tapir. Ixchel's male calf was born on July 2, 2021.

Ixchel came to Audubon Zoo from Franklin Park Zoo in 2019 as part of an Association of Zoos and Aquariums' Species Survival Plan recommendation to breed with Tybalt, who arrived at Audubon in 2018 from Nashville Zoo. Species Survival Plans are collaborative conservation efforts among AZA-accredited institutions that recommend breeding based on genetic compatibility.

A Cute Little Tapir Is The Latest Addition To Budapest Zoo!

The striped little calf was born on Monday, June 28th.

While, typically, newborns may not be seen by the general public in the first days, the mother and the little one are expected to be released from the "maternity room" to the enclosure earlier, so with a little luck, visitors can admire them.

What’s more, the South America exhibit, home to The Zoo’s tapirs, is also broadcasted on the Budapest Zoo’s website via webcam.

The zoo’s tapir family, together with the little one just born, consists of a total of four animals.

was born on the 20th of February last year.

Major milestone for Franklin Park Zoo's little female – she successfully reunited with mom, Abby, this week! The calf was seen nursing within hours – even gaining weight since the intro – and Abby has been acting like the wonderful seasoned mom that she is. The pair will remain behind the scenes to continue bonding before making an exhibit debut. The male tapir calf remains at Cummings School of Veterinary Medicine at Tufts University, receiving around-the-clock care.
More: https://www.zoonewengland.org/zoo-news/2020/october/baird-s-tapir-twins-being-treated-for-health-complications/
Follow FPZ:
http://Facebook.com/StoneZoo
http://Facebook.com/FranklinParkZoo
http://Twitter.com/ZooNewEngland
http://Instagram.com/zoonewengland
https://www.snapchat.com/add/zoonewengland