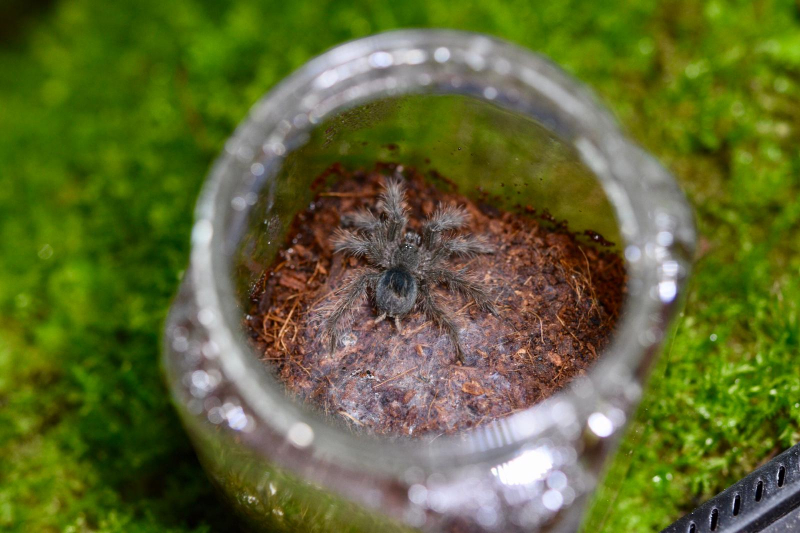 ZooBorns doesn't often post baby spiders, but when we do, the response is... well... polarized! For those of you new to the ZooBorns family, welcome! We may seem like fuzzy and sweet rules the roost here, but, in fact, we have a special place in our hearts for the, well, more... creepy crawly babies! (N.B. They are sometimes fuzzy!) We know there are arachnophobes in the group so this is fair warning: if you can't stand spiders, please avoid this video and what lies beneath the fold, you're not gonna like it. Alas, here come  @WellingtonZooTrust 's Bird Eating Tarantula Babies! 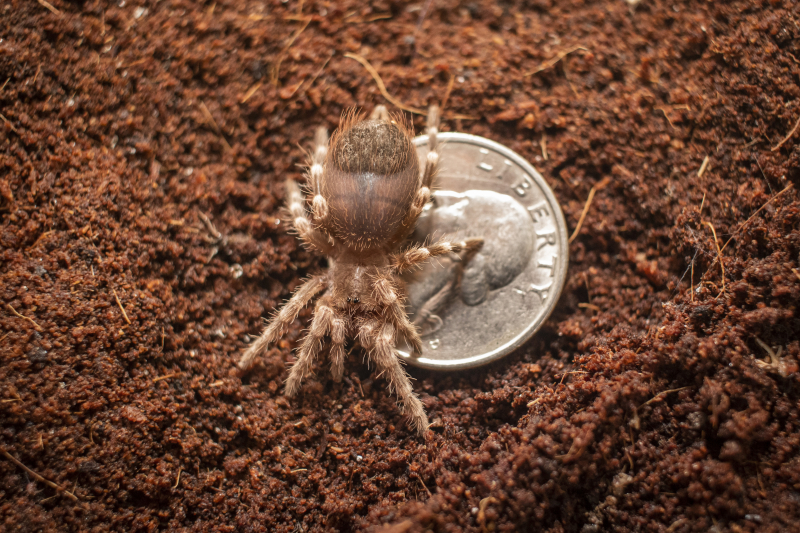 Eight young Tarantulas, or “Spiderlings,” were brought to Brevard Zoo after being confiscated from an importer by U.S. Fish and Wildlife Service (USFWS). The small Spiders, which are each about the size of a quarter, include four Brazilian Whiteknee Tarantulas (shown above on quarter and in bottom photo) and four Brazilian Salmon Pink Bird-eating Tarantulas (below). 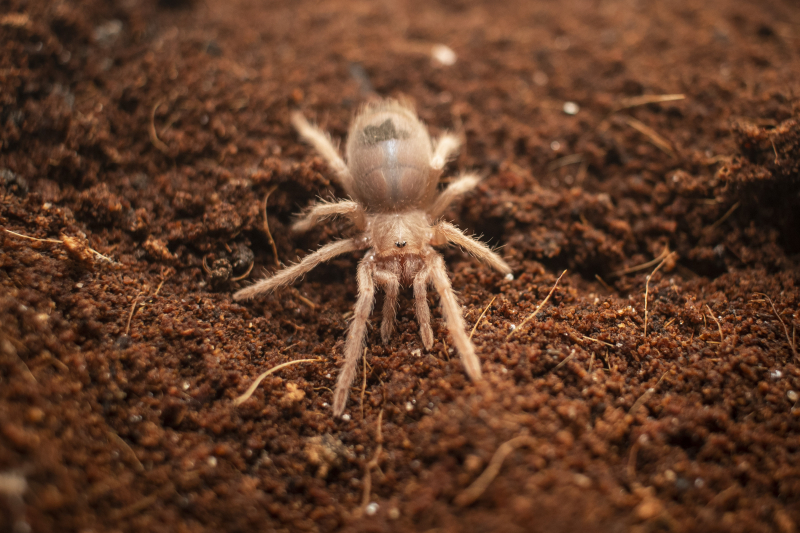 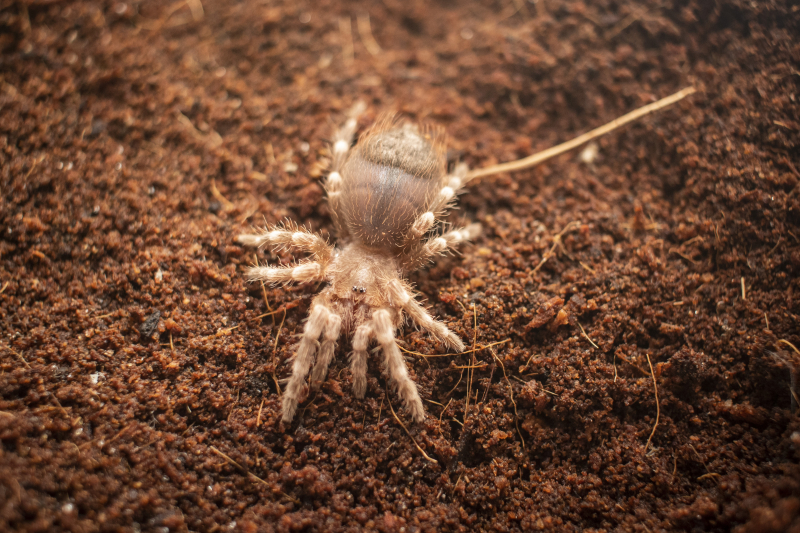 The Spiders came via Woodland Park Zoo, which took in a total of 250 Tarantulas from USFWS. It is likely that the Spiderlings were bred from illegally wild-caught adults because Brazil does not permit the export of fully-grown Tarantulas. The Spiderlings were most likely headed to the pet trade.

“We hope to use these Arachnids to help zoo guests learn more about the importance of Spiders and the impacts of wildlife trafficking,” said Michelle Smurl, the zoo’s director of animal programs.

The Spiderlings are currently housed in a behind-the-scenes area, but plans are to introduce them to zoo guests during keeper chats later this year.

Brazilian Whiteknee Tarantulas can grow to a leg span of eight-and-a-half inches. Unlike many larger Tarantulas, this species is very colorful in appearance due to the white stripes that adorn its knees.

Brazilian Salmon Pink Bird-eating Tarantulas are among the largest in the world, reaching a leg span of 11 inches. Aside from what its name suggests, this species also feeds on various Insects, Lizards and Frogs. 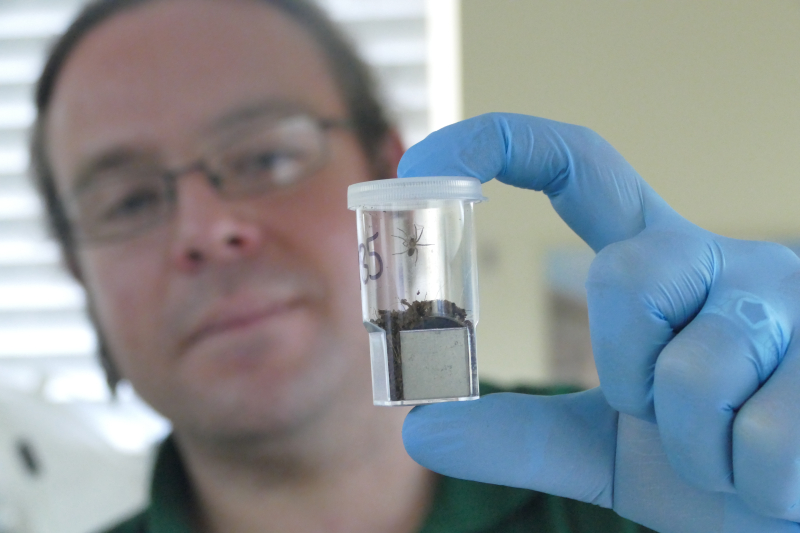 One of the rarest spiders on earth has bred at Bristol Zoo Gardens in a world first.

Over 1,000 tiny Desertas Wolf Spiderlings have hatched in the Zoo’s Bug World. So valuable are the babies, some have even been hand-reared by dedicated keepers from tiny eggs.

The hatchings are a huge boost for the species, which is only found in one valley on one of the Desertas Islands, near Madeira, Portugal. There is thought to be a single population of just 4,000 adult spiders left in the wild – an alarmingly small number for an entire invertebrate species.

It is hoped that some of the spiderlings can be returned to their native island in the future to boost dwindling numbers in the wild. 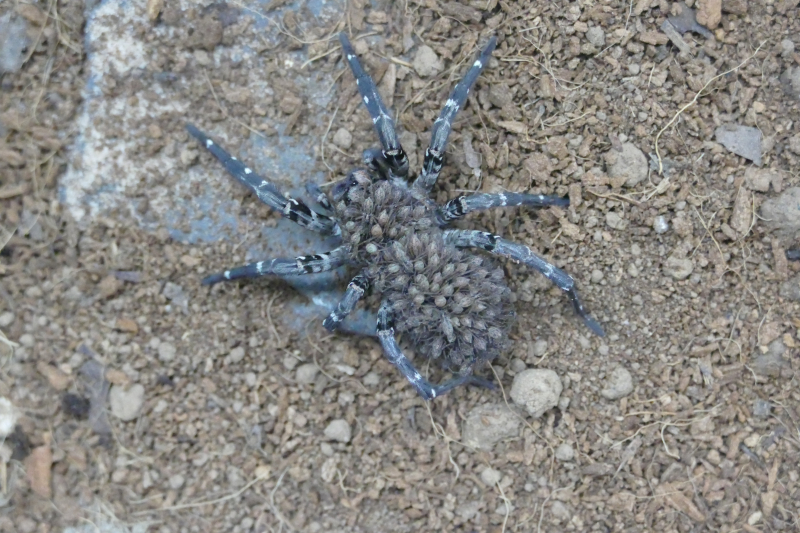 Desertas Wolf Spiders (Hogna ingens) are classified as “Critically Endangered” on the International Union for Conservation of Nature’s (IUCN) Red List of Threatened Species but are not protected by any specific legislation.

The baby spiders are just 4mm in diameter but grow to be huge, impressive-looking black and white adults up to 12cm in size with a body size of 4cm. They are under threat from habitat loss, due to invasive grass binding the soil where they burrow and blocking their natural shelters.

Bristol Zoo has joined forces with Instituto das Florestas e Conservação de Natureza (IFCN) and the IUCN to develop a conservation strategy to protect the species in an effort to prevent it becoming extinct.

As part of the vital conservation effort, Bristol Zoo’s Curator of Invertebrates, Mark Bushell, travelled to Desertas Grande last year with Zoo vet Richard Saunders and collected 25 Desertas Wolf Spiders to be brought back to the Zoo to breed as a ‘safety net’ population.

The effort has been a great success, as Mark explains: “Because this was the first time this species had ever been taken into captivity to breed, it was a steep learning curve. After some of the female spiders were mated, it was an anxious wait to see if they would produce egg sacs. We were thrilled when they did, and to see the tiny spiderlings emerge was fantastic – a real career highlight.”

Such was the keepers’ dedication, that when one of the female’s egg sac broke, eggs were carefully transferred into a miniature incubator for rearing. Once the eggs hatched, they were put into separate containers with sterilized soil, kept in quarantine and individually fed with fruit flies.

Bristol Zoo now plans to send hundreds of the tiny spiderlings to other Zoos in the UK and Europe to set up further breeding groups as part of a collaborative conservation programme for the species.

Mark added: “Establishing the world’s first captive breeding programme for this species is a fantastic step towards protecting it for the future. It is a beautiful and impressive creature, but its natural habitat is being altered by invasive plants. There are simply not enough rocky and sandy areas of habitat left for the spiders to burrow and hide in. The result is a deadly game of musical chairs, whereby the spiders are competing for fewer and fewer burrows.”

Mark added: “In addition to the loss of habitat, one single catastrophic event could wipe out the species entirely. Now we have successfully created a ‘safety net’ population here at Bristol Zoo to help safeguard this impressive creature for the future.”

In future it is also hoped that Bristol Zoo’s team of horticulture experts can visit Desertas Grande to work with park rangers to control the invasive grass, which is destroying the spiders’ habitats and help restore the original landscape.

Bristol Zoo Gardens is a conservation and education charity and relies on the generous support of the public, not only to fund its important work in the zoo but also its vital conservation and research projects spanning five continents.

For more information about visiting Bristol Zoo Gardens, visit their website at www.bristolzoo.org.uk . 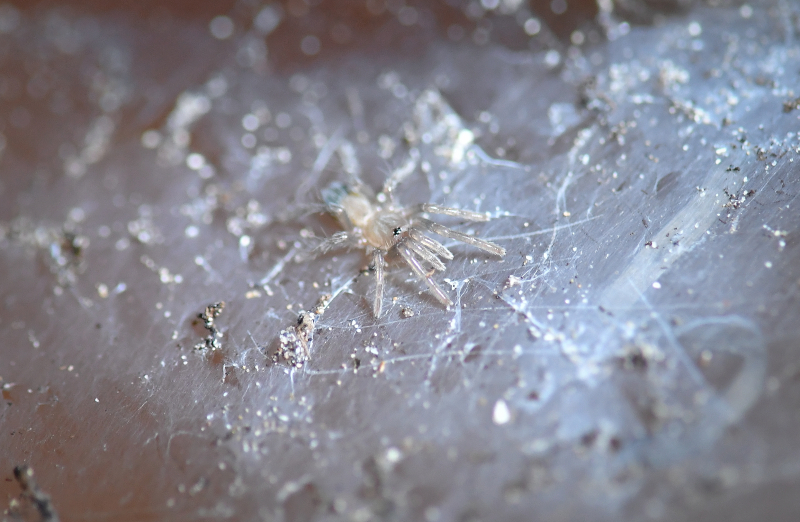 A clutch of about 200 rare and unusual Montserrat Tarantulas has hatched at Chester Zoo.

Invertebrate keepers at the Zoo are the first in the world to successfully breed the tarantulas, marking a crucial step towards discovering more about the mysterious species. 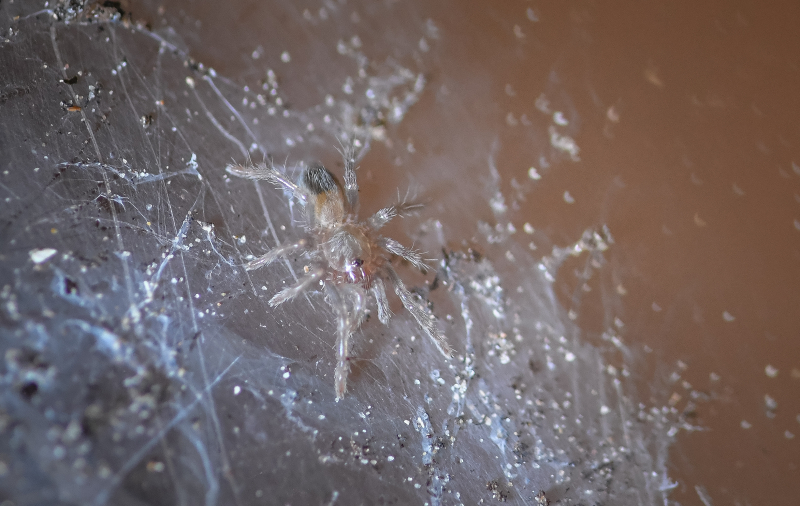 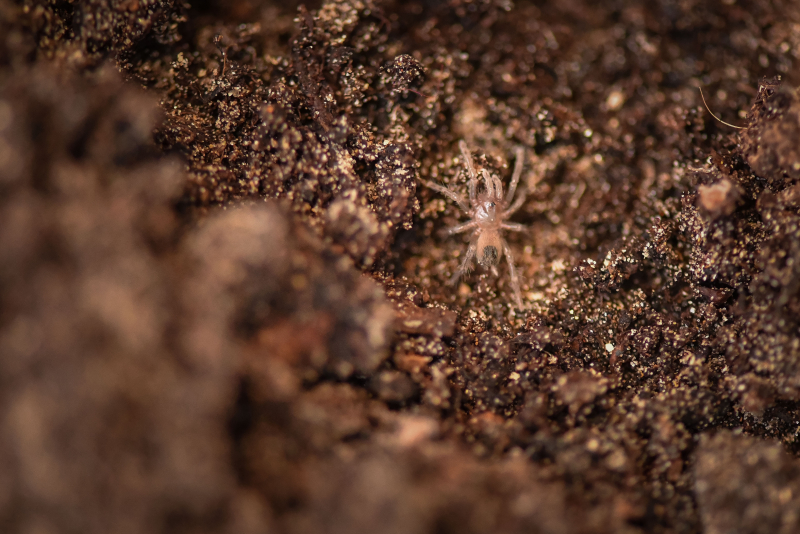 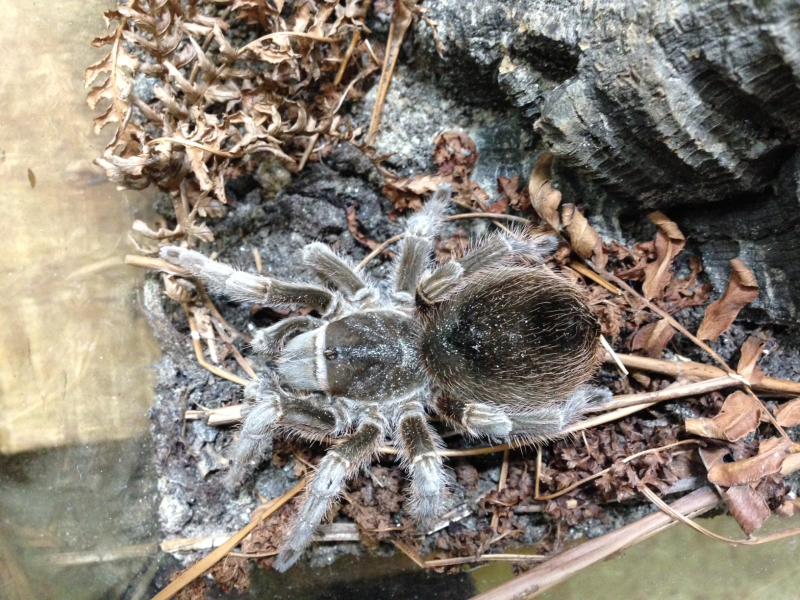 Native to the Caribbean Island of Montserrat, very little information is known about these tarantulas and how they live.

New behavioral observations made for the first time, by experts at the zoo, have revealed crucial insights about the Montserrat Tarantulas which, prior to their breeding, had never before been seen in zoos or in the wild.

Dr. Gerardo Garcia, Curator of Lower Vertebrates and Invertebrates at Chester Zoo, said, “Breeding these tarantulas is a huge achievement for the team, as very little is known about them. It’s taken a lot of patience and care to reach this point.

“The data we’ve been able to gather and knowledge we’ve developed over the last three years since the adults first arrived has led us to this first ever successful, recorded breeding and hopefully these tiny tarantulas will uncover more secrets about the behavior, reproduction and life cycle of the species.

“We know that males have a very short life span when compared with females and gauging their sexual maturity to select the best possible time to put them together for mating, is vital to the breeding process.

“It’s successes like this which really highlight the work that zoos are doing behind-the-scenes to conserve a range of endangered species, including the smaller, less known species that contribute to the world’s biodiversity.

“Importantly, the skills and techniques the team has developed with this new breeding success will now be transferred to other threatened species.”

Tiny Tarantulas Hatch By The Hundreds! 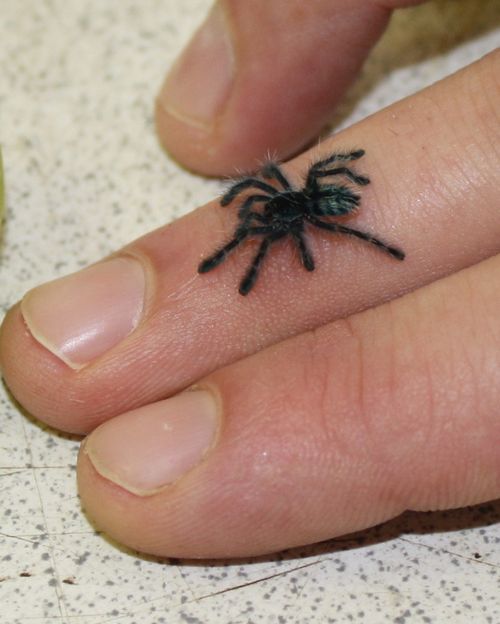 The U.K.'s Bristol Zoo is celebrating the hatching of over 140 Antilles Pink-toed Bird-eating Tarantulas. At four weeks old, the spiderlings are now little more than the size of a 5p coin with a striking metallic steel blue-black colouring. Zoo guests can see the new arrivals in the window of the tropical breeding room in the Zoo’s Bug World.

Mark Bushell, assistant curator of invertebrates at Bristol Zoo, said: “This species is one of the most beautiful types of tarantula around. When the spiderlings first hatch, they are tiny and translucent but they gradually develop, moult and turn into little blue fluffy tarantulas and are very eye-catching”. 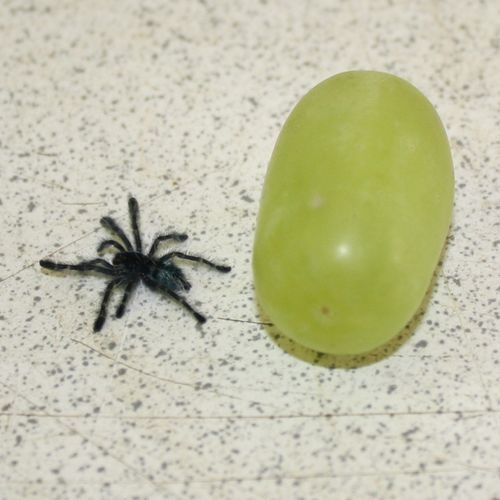 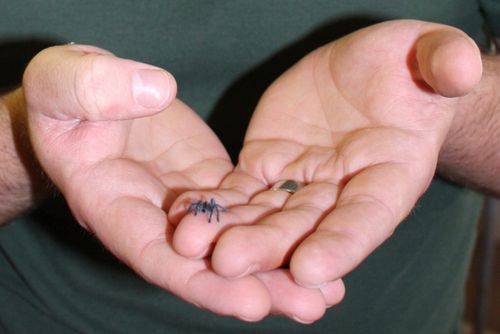 He added: “Breeding these spiders is a real achievement. It has been a fantastic experience for our team of invertebrate keepers and means now have the tools to successfully breed more species of arachnid in future, including some of the more endangered species.”