On July 1, Colchester Zoo welcomed a baby Serval named Nala. The kitten currently lives behind the scenes, where she is under the expert care of zoo keepers.

Like most kittens, Nala is playful, as you can see in the video below. During play, she exhibits the amazing skill that Servals are known for: leaping into the air to pounce on top of their prey. 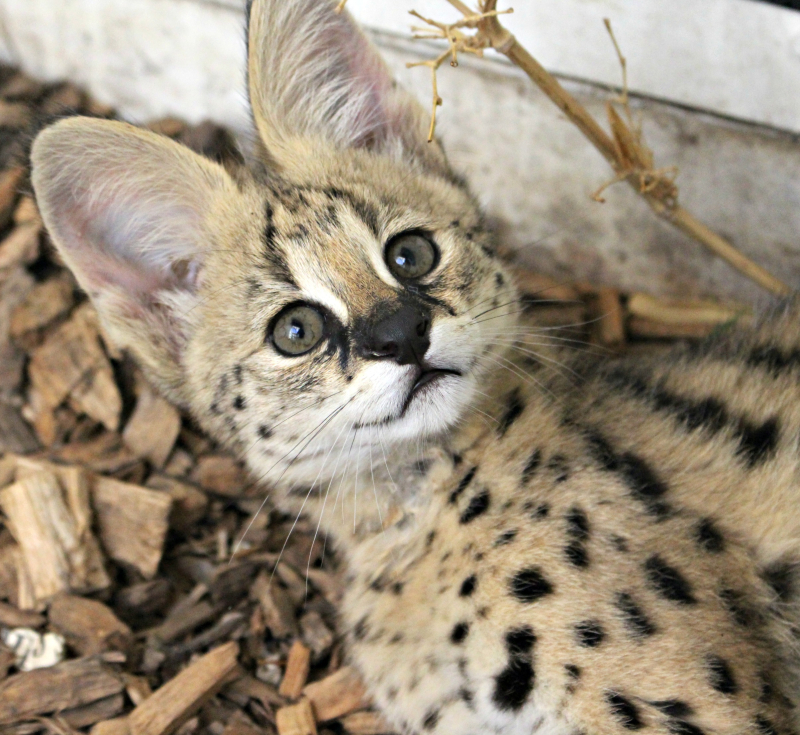 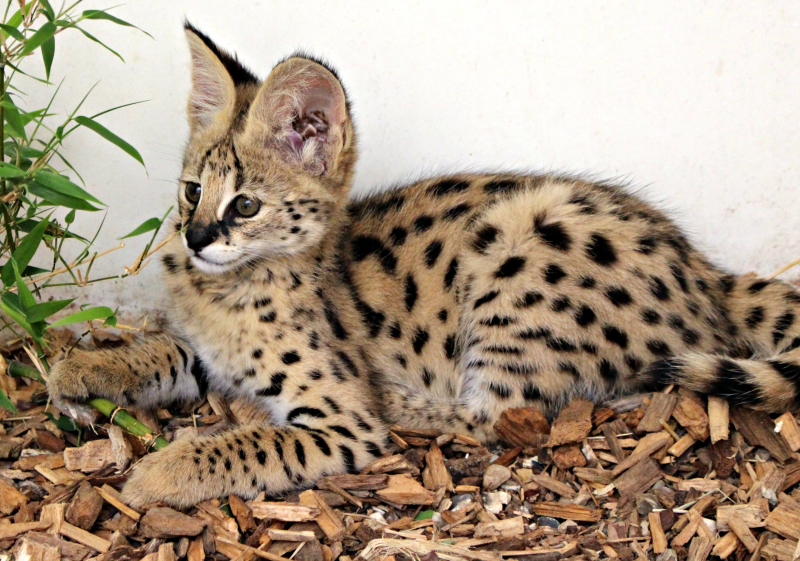 Servals live in much of Africa south of the Sahara Desert. Weighing 20-40 pounds as adults, these medium-sized Cats have the longest legs relative to body size of any feline. Their super-sized ears help them locate prey. Because Servals favor habitats with tall brush, long legs give them an advantage when tracking small mammals, birds, frogs, and reptiles through the grass. Once prey is within reach, Servals can leap more than six feet upward and ten feet forward to forcefully pounce on prey with their forepaws. A quick bite to the prey animal’s head or neck delivers the fatal blow.

Much of Africa’s Serval population lives on protected land and hunting of Servals is prohibited in many, but not all, countries. Though Servals are currently listed as a Species of Least Concern by the International Union for Conservation of Nature (IUCN) Red List, continued degradation of habitats, especially wetlands and grasslands, could pose a threat in the future.

See more photos of Nala below. 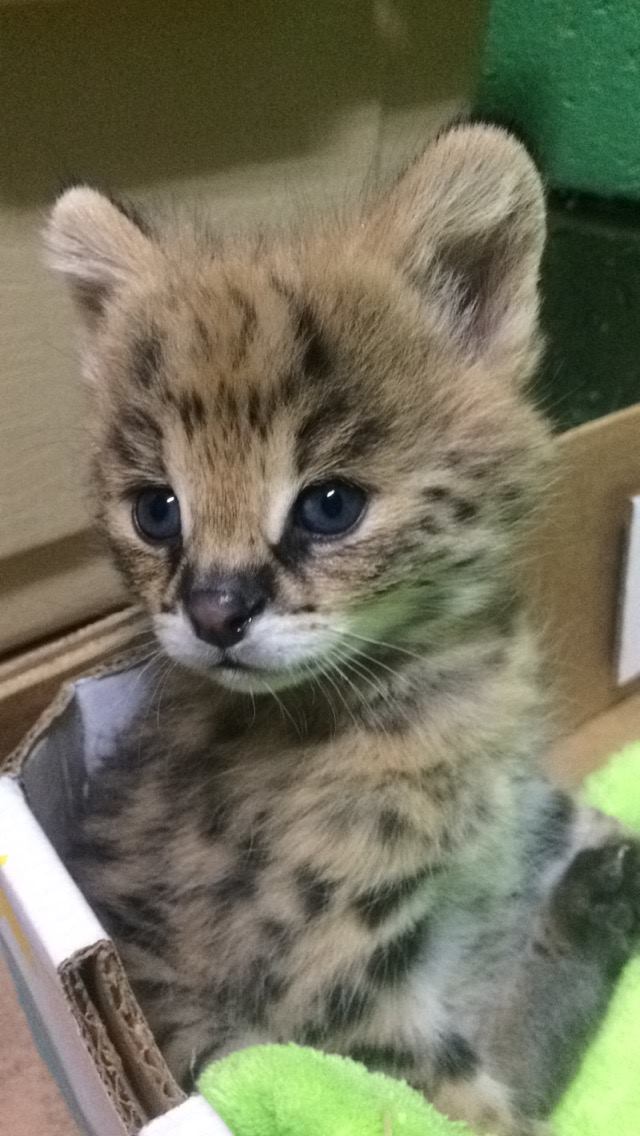 Zuberi is a two-month-old Serval kitten whose name means “strength” in Swahili. His strength is exhibited by the playful exuberance he uses to approach life.

The small one (with the big ears) was born December 9 at Capron Park Zoo in Attleboro, Massachusetts, to mom Summer and dad Sav.

Summer is two-years-old and arrived at the Zoo about a year ago. The intention was for Summer to bond and mate with resident Serval, Sav. The pair are offspring of wild Servals, and their genetics are an important contribution to their captive-held species.

Sav, unfortunately, suffered a serious injury as a kitten and lost one of his legs. Keepers were not sure of his reproductive abilities, which makes Zuberi’s existence even more meaningful.

Zuberi and his mom are now on exhibit at Capron Park Zoo. 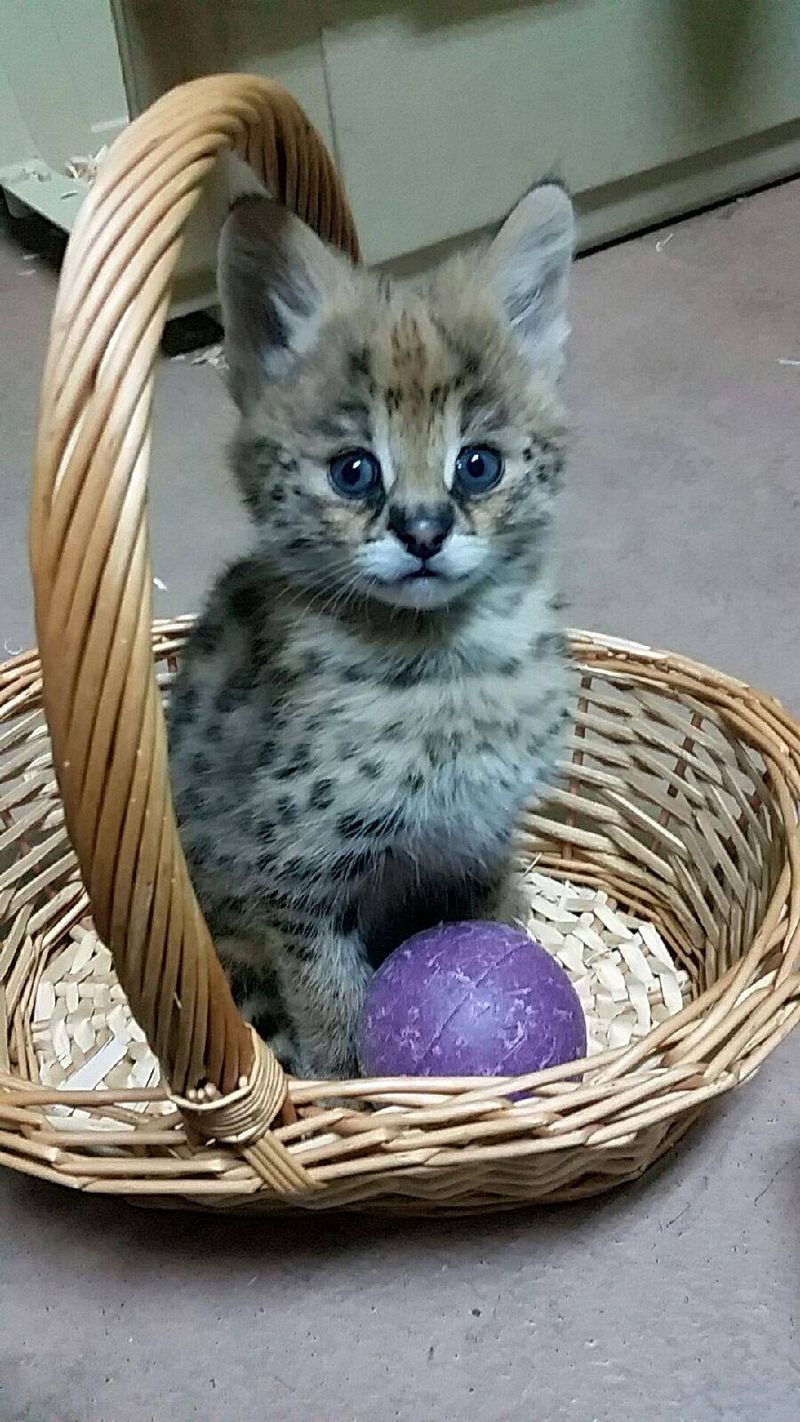 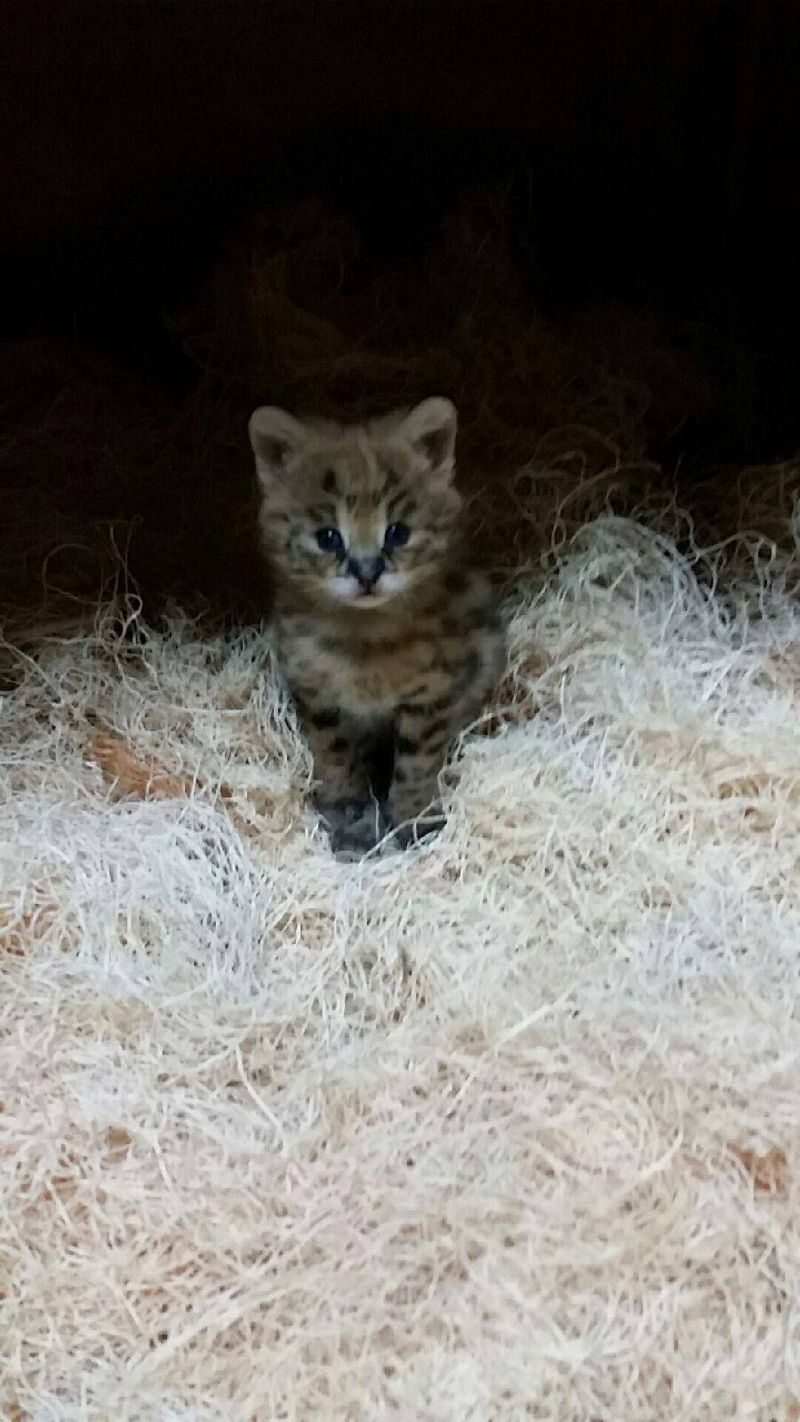 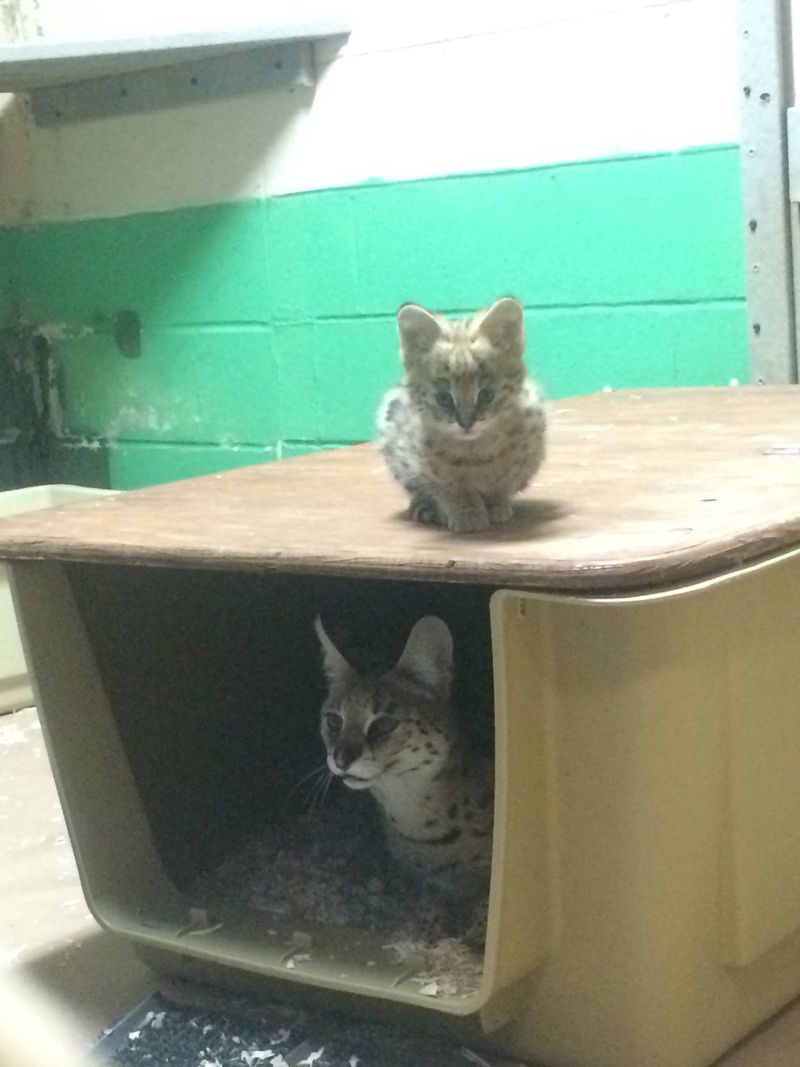 The Serval (Leptailurus serval) is a medium-sized African wild cat that is native to sub-Saharan Africa. DNA studies indicate it is closely related to the African Golden Cat and the Caracal.

The species is well adapted for detecting and capturing small animals in long grass. It also has the longest legs of any cat, relative to body size. Most of this increase in length is due to the greatly elongated metatarsal bones in the feet. The toes are also elongated, and unusually mobile. The head is small in relation to the body. Another distinctive feature is the large ears and auditory bullae in the skull, indicating a particularly acute sense of hearing. The closely set ears contain 22 muscles each, allowing them to rotate up to 180 degrees independently of each other. Their adult weight ranges from about 7 to 12 kg (15 to 26 lb) in females, and from 9 to 18 kg (20 to 40 lb) in males.

The pattern of the fur is variable. Usually, the Serval is boldly spotted black on tawny, with two or four stripes from the top of the head down the neck and back, transitioning into spots.

The Serval’s main habitat is the savanna, although melanistic individuals are more usually found in mountainous areas at elevations up to 3,000 meters (9,800 ft). The Serval needs watercourses within its territory, so it does not live in semi-deserts or dry steppes. They also avoid dense equatorial jungles, although they may be found along forest fringes. They are able to climb and swim, but seldom do so.

Dozens Of Babies Steal The Show At Cincinnati Zoo 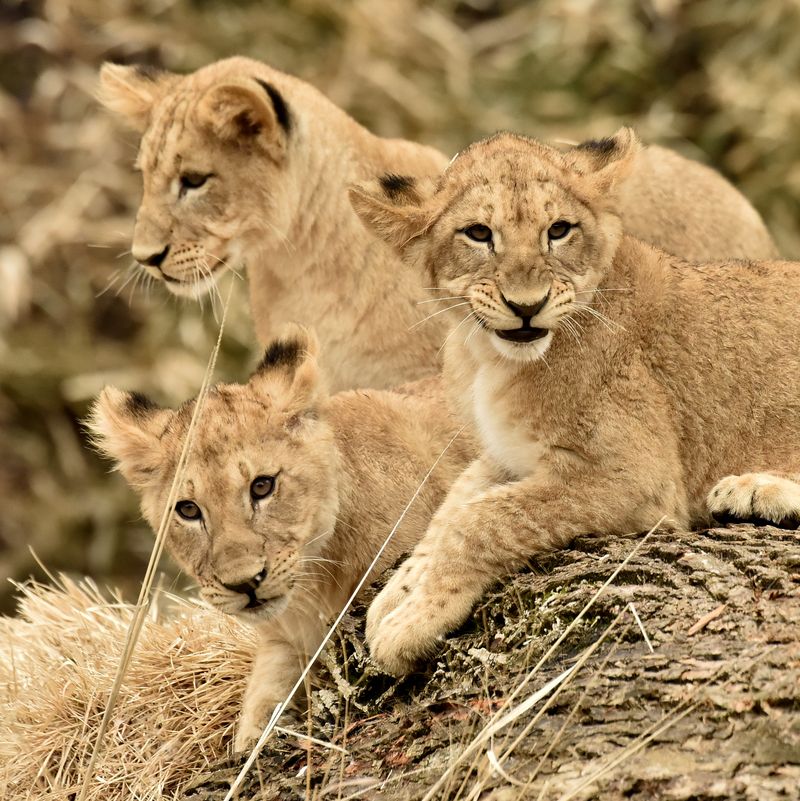 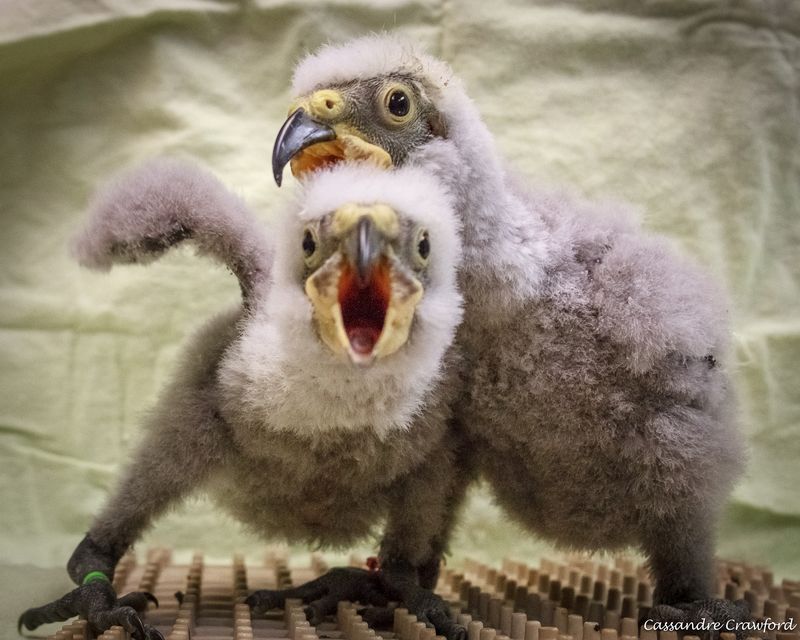 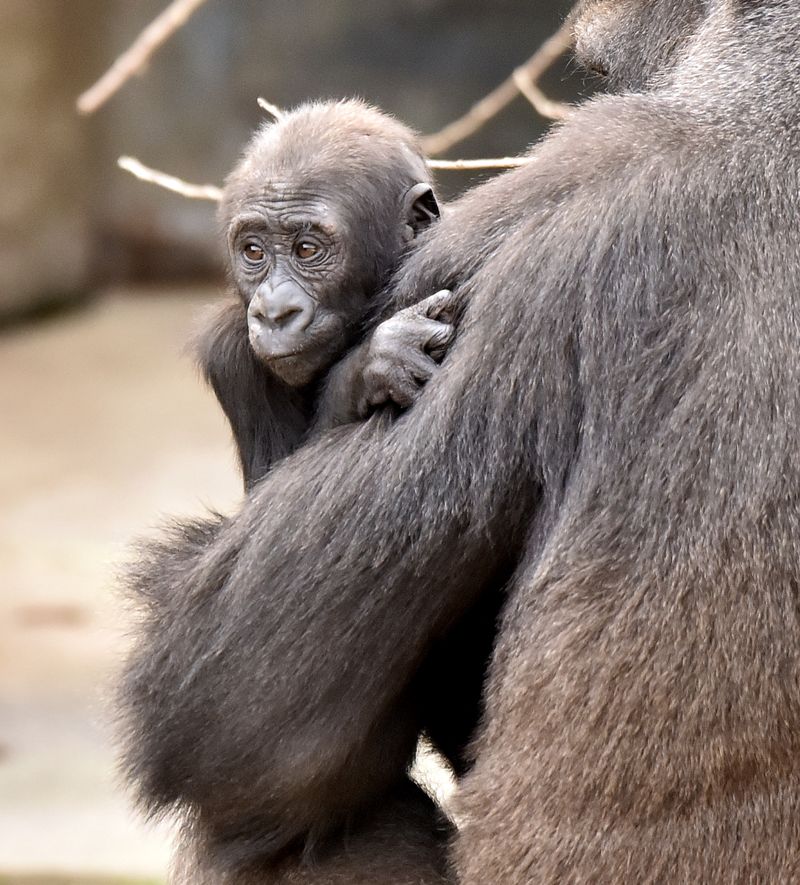 All the little ones have kept their parents – and zoo keepers – busy.  The three female African Lion cubs are particularly feisty, testing their “grrrl” power on a daily basis with their father John and mother Imani.

Other babies include three Bonobos, two Gorillas, a Bongo, a Serval, two Capybaras, a Rough Green Snake, Giant Spiny Leaf Insects, Thorny Devils, Little Penguin chicks and Kea chicks.  “This is the largest and most varied group of babies we’ve had. We’re particularly excited about the successes we’ve had with the endangered African Painted Dogs and the hard-to-breed Kea,” said Thane Maynard, Cincinnati Zoo Executive Director. 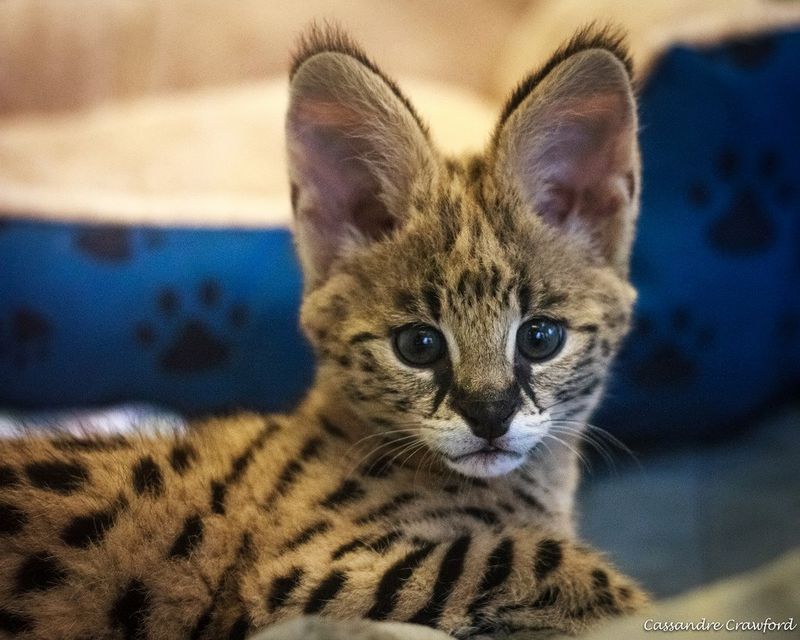 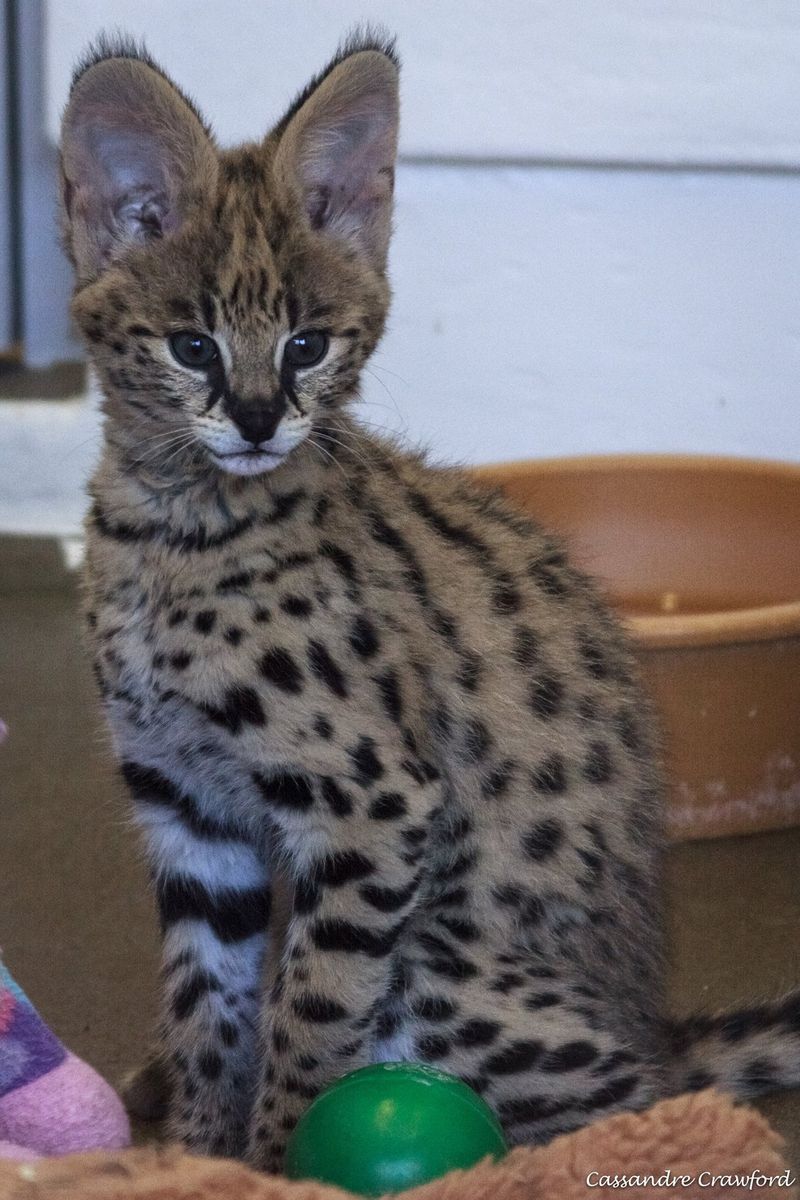 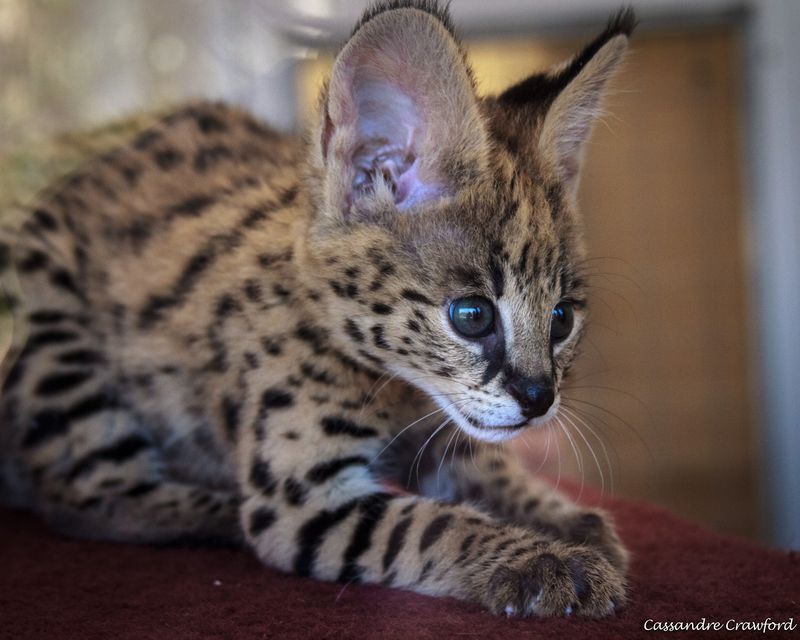 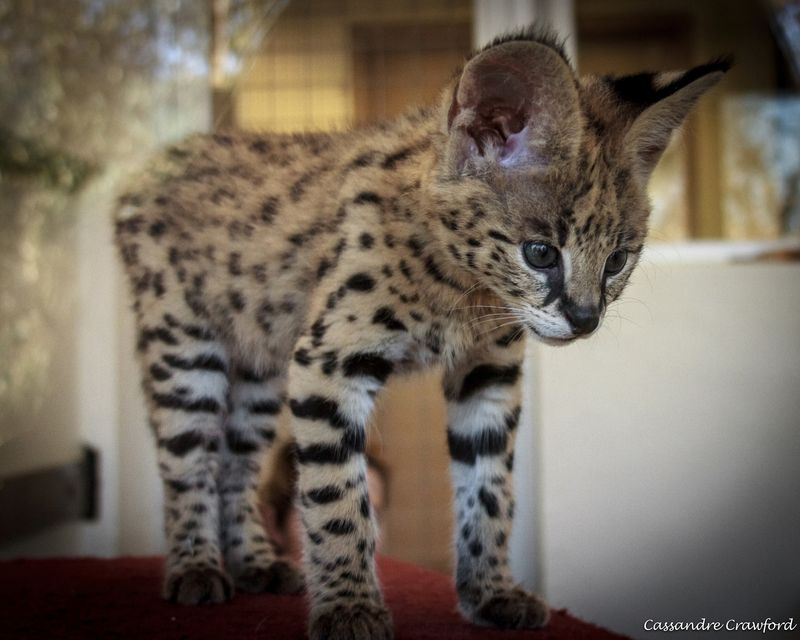 The feisty boy is currently in quarantine, at the Zoo’s nursery, to ensure he is healthy before introduction to the other animals. He will remain in nursery, for the remainder of the spring. During this time, staff will also have the opportunity to work hands-on with him and prepare him for future participation in the Zoo’s Cat Ambassador Program.

Cincinnati Zoo’s Cat Ambassador Program is a unique experience that allows visitors, by special arrangement, to see some of the beautiful cats, up-close and without bars. Not only are guests allowed to witness the cat’s athletic abilities, they are provided an opportunity to learn more about their importance to the world and the challenges they face as a species. Zeke will, eventually, become a member of the Cheetah Encounter Show, which features cats with exciting running and jumping prowess.

The Serval is a medium-sized African wild cat. They have the longest legs of any cat, relative to body size. Most of the increase in length is due to the greatly elongated metatarsal bones in the feet. The toes are also elongated, and unusually mobile, helping the animal to capture partially concealed prey. The Serval also possesses an acute sense of hearing, which is attributed to their large ears and auditory bullae in the skull.

In the wilds of Africa, they prefer to inhabit the savanna. They do, on occasion inhabit mountainous areas, but tend to avoid equatorial jungles. They are able to climb and swim, but have no partiality to either.

The Serval is mainly nocturnal, and they generally stick to hunting of smaller prey.  Because of their legs, they are record jumpers and are also able to run at speeds of, up to, 50mph /80 km/h.  They are also known to be highly intelligent and lovers of mischief. 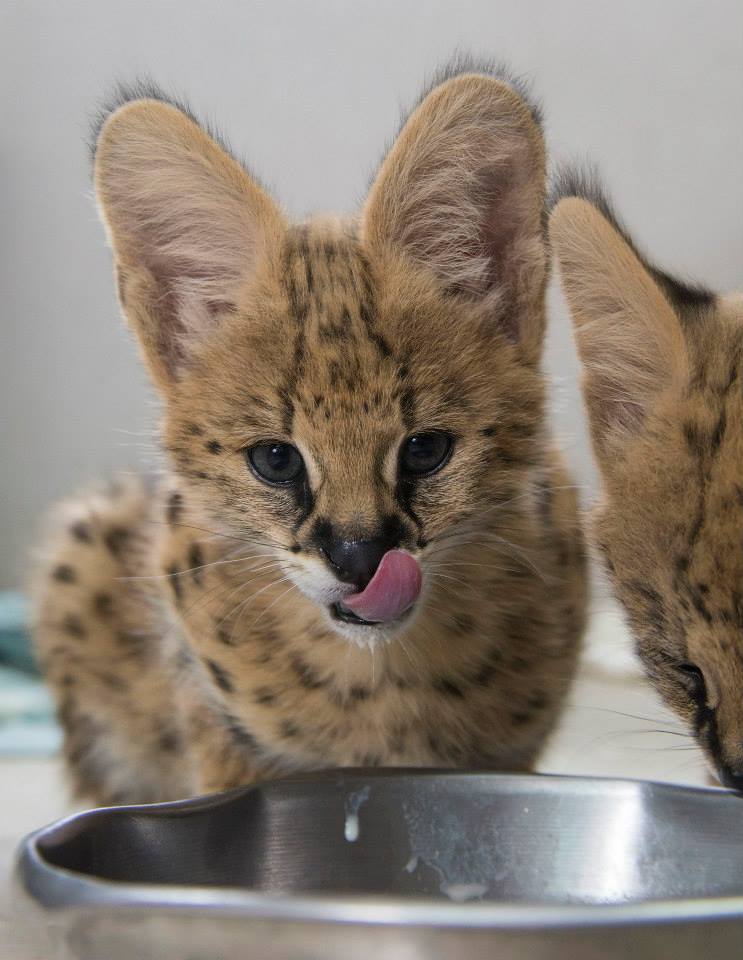 As adults, Africa’s Serval cats are one of the world’s most successful hunters. But as kittens, these future spotted killers are one of the cutest creatures you’ve ever seen. Making their debut this week in Naples Zoo at Caribbean Gardens, the brother and sister Servals are just two months old. You can see them in the new Animal Training Session presentations held daily in the Zoo’s Safari Canyon theater at 10:00 a.m. and 2:30 p.m. 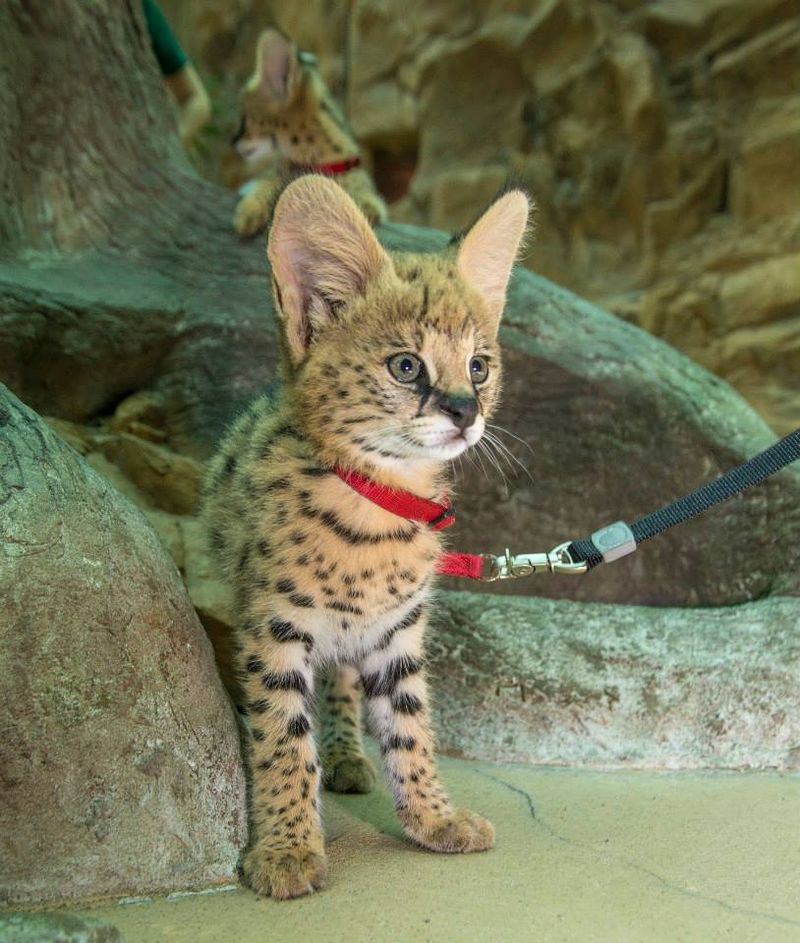 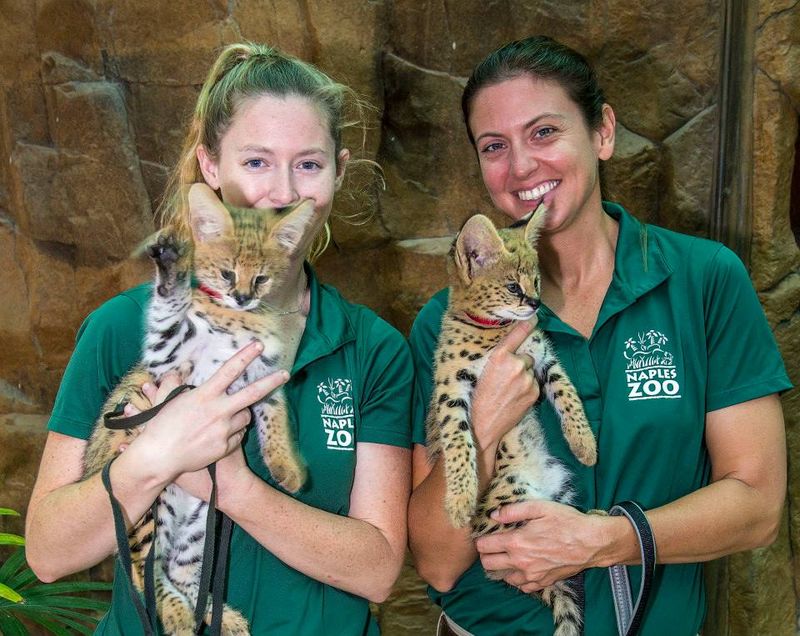 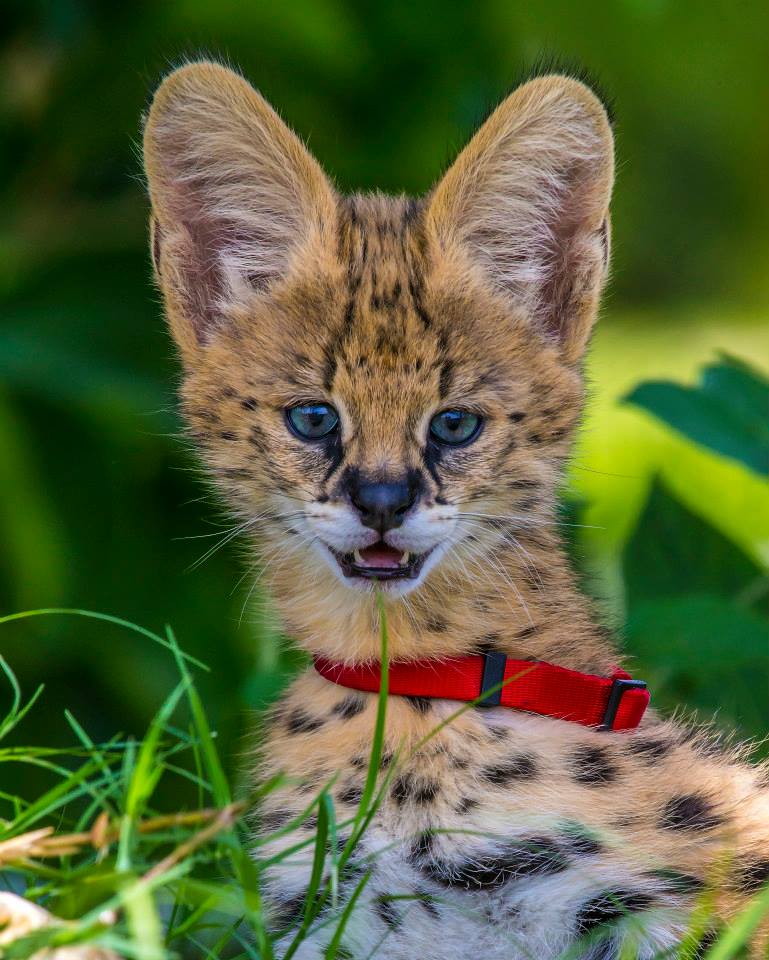 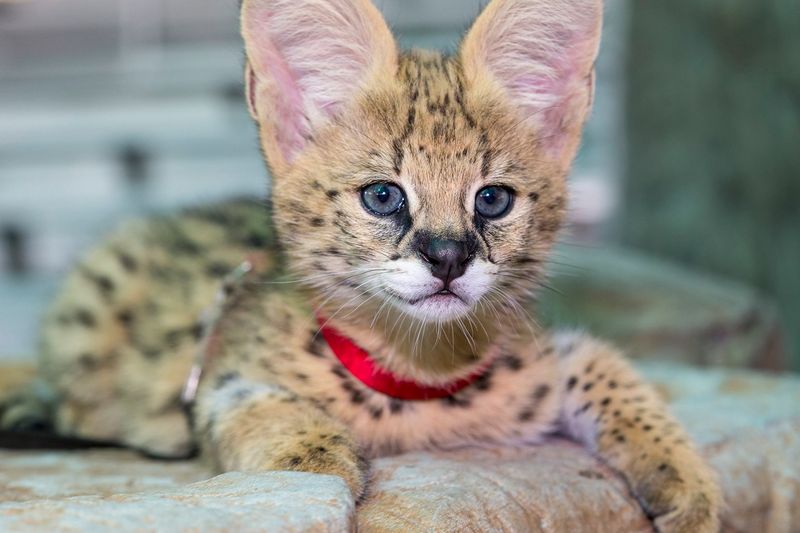 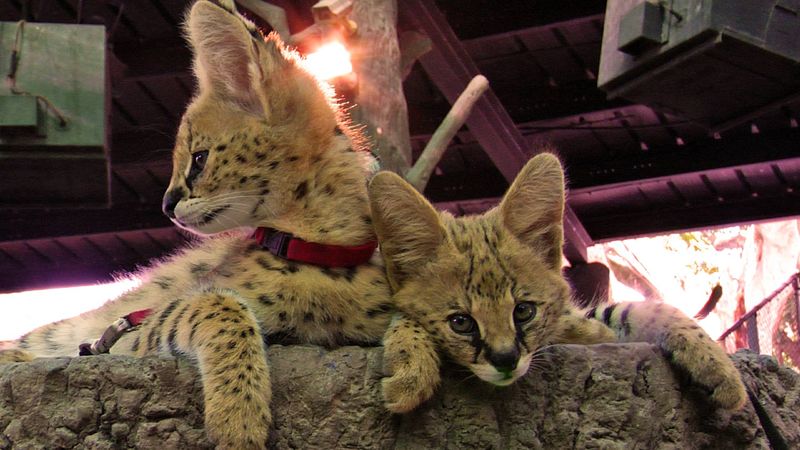 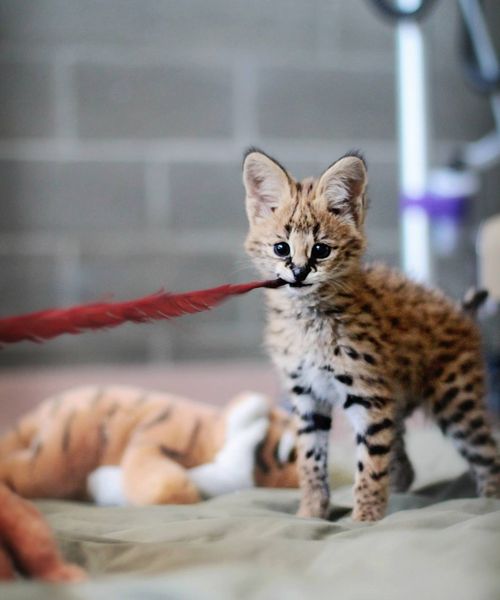 Meet Sheldon, Point Defiance Zoo's baby Serval. In addition to little Sheldon, there are a few other young cats at the zoo right now - Kali the Tiger cub and Tien the baby Clouded Leopard. Keepers get them together for playtime both behind the scenes and now at certain times within public view so guests can enjoy their antics. Sheldon can always be identified by his big ears. That size, along with the ability to rotate them independently, allows them to pinpoint small animals close by when hunting.


The Serval (Leptailurus serval), a medium-sized cat found throughout sub-Saharan Africa, lives mainly in thickly covered areas close to water. This species is unusual in that it loves to play in the water.  They practice leaping in it as well, a hunting method they use to catch birds in flight, as well as pouncing on hares and mole rats, which round out their carnivorous diet. 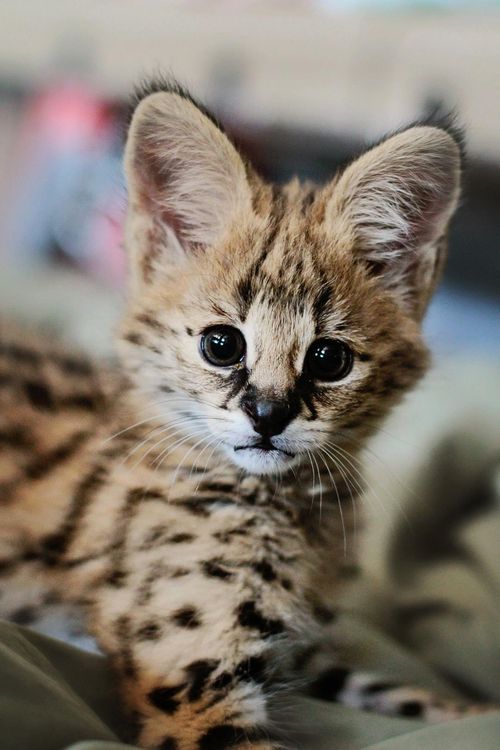 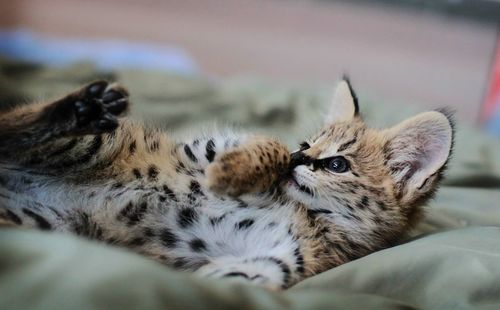 Although the Serval is not considered to be at great risk in the wild, they are being subjected to increasing loss of their wetland habitats, which has led to population declines in certain areas. They are also extensively hunted for their fur. 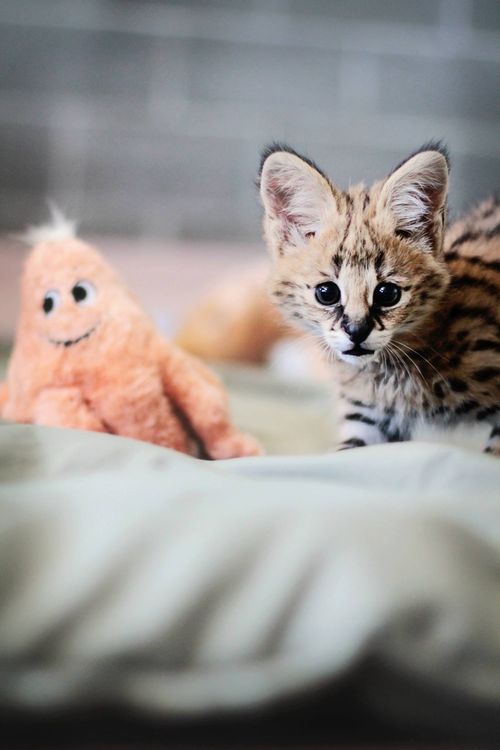 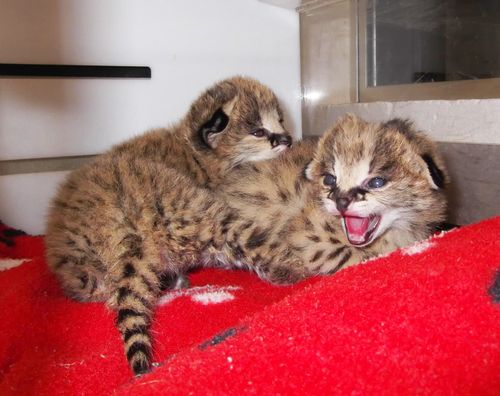 Late last month, Zoo Boise welcomed two tiny new born Serval Cats.  Servals are small African spotted cats. The kittens (one male, one female) are being hand-reared by zoo staff, because their mother was not caring for them properly. Visitors are able to see them in their incubator at the zoo's Simplot Education center. 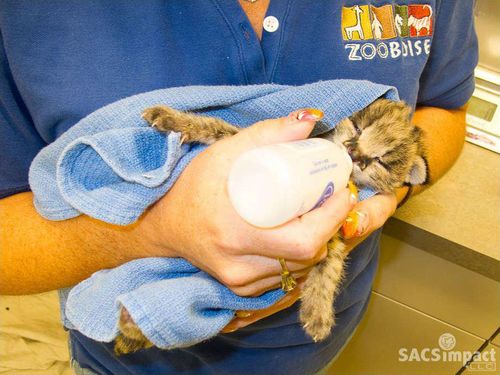 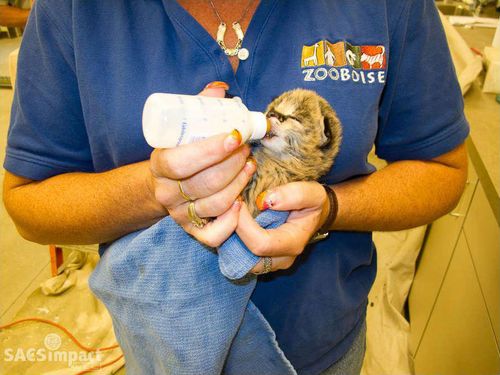 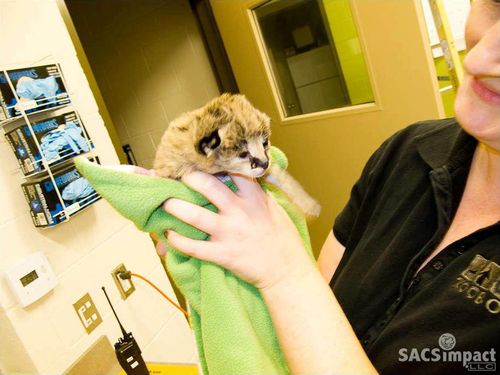 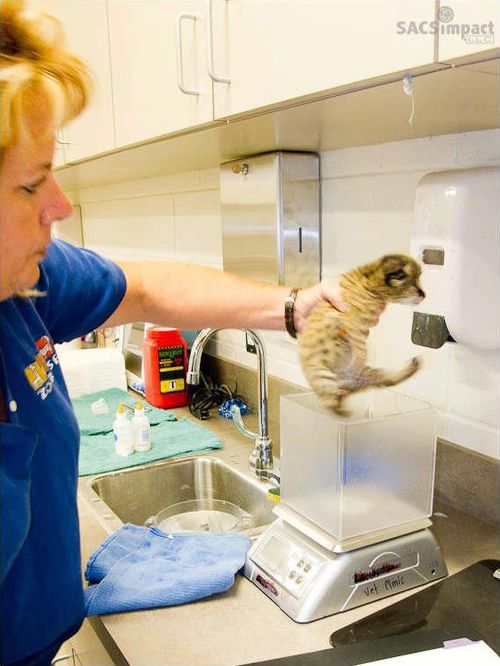