“I congratulate Iggy on the birth of her calf, and I commend the staff at Seneca Park Zoo for ensuring Iggy and her calf will receive outstanding medical care in the next few, critical days,” said Monroe County Executive Adam Bello. “So far, the calf is nursing and appears to be healthy, but we do know that baby giraffes have high mortality rates. Zoo staff will be monitoring baby and mom 24/7 and the zoo’s Animals of the Savanna building will remain closed for the next few days to ensure they’re not disturbed.” 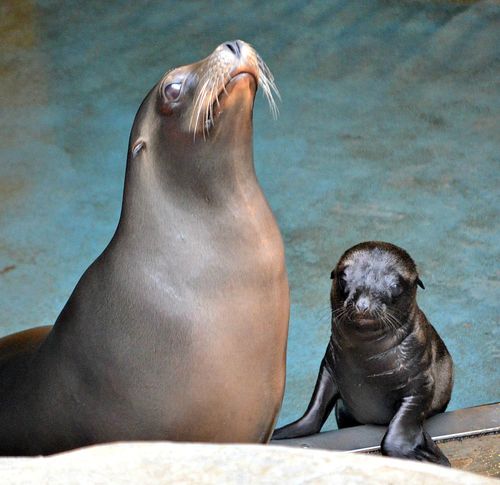 The Seneca Park Zoo in Rochester, New York welcomed a California Sea Lion pup on June 1 to first-time mom Marina.  While the pup’s gender is not yet known, it is the 18th baby born at the zoo this year. 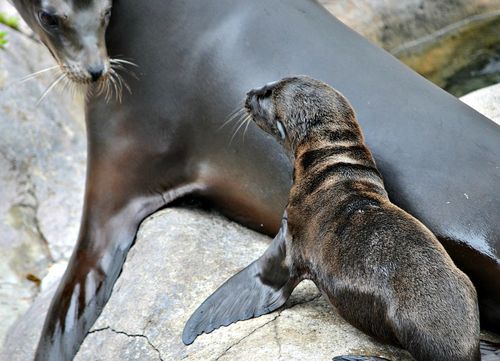 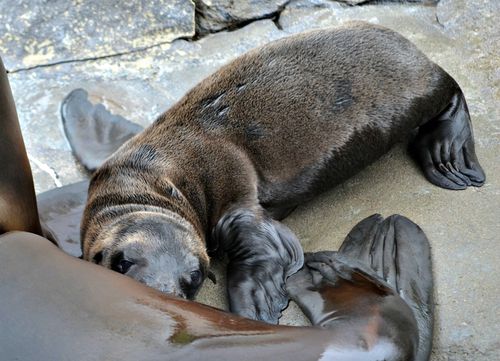 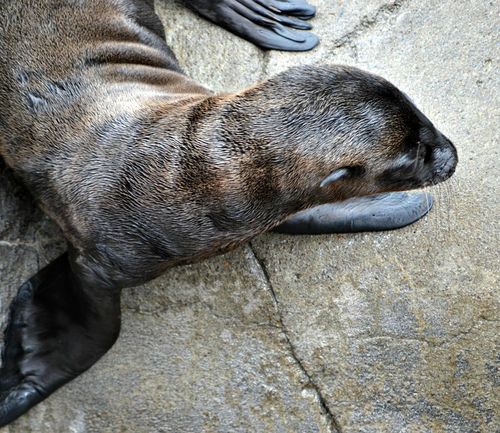 Four-year-old Marina came to the zoo in 2011 after being stranded on a beach in Los Angeles County, California.  The pup’s father was Puff, who arrived from Sea World Orlando in 2007.  Puff died last fall.

California Sea Lions are native to the Pacific coast of North America, from Alaska to Mexico.  Sea Lion populations are not threatened, but they are protected from hunting and harassment by the Marine Mammal Protection Act.  Sea Lions’ intelligence and trainability have led to their use by the United Sates Navy to detect underwater mines. 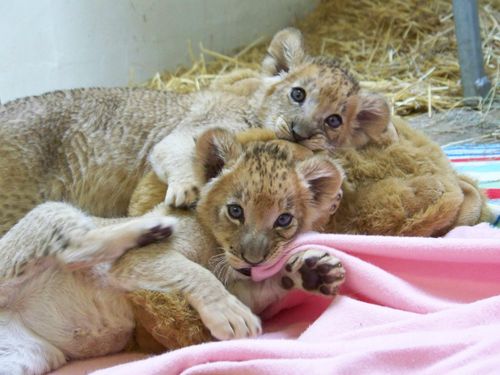 Have you met these two African Lion cubs from Seneca Park Zoo? We introduced them HERE on ZooBorns on April 26. Born just eight weeks ago on March 7 to first time parents Asha and Chester, there is one male and one female. While they may not be old enough yet to get their rough and tumble on, they seem to be working on their nipping and rolling around skills!

Monroe County Executive Maggie Brooks said, "After nearly two months of excellent care by our zoo staff, we can officially announce that these two lion cubs will soon re-join their parents for our entire community to see.”  Within a month, the twins will begin going out in the habitat in the zoo's A Step Into Africa Exhibit, which just opened last year. But today you can see them in action on the video below. 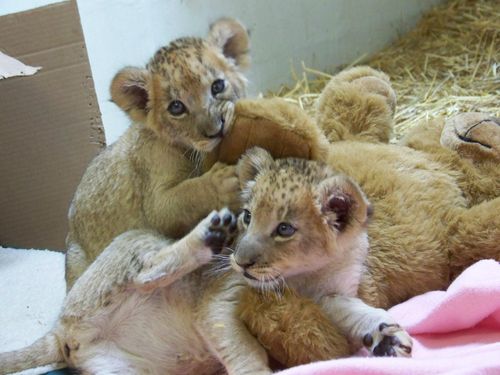 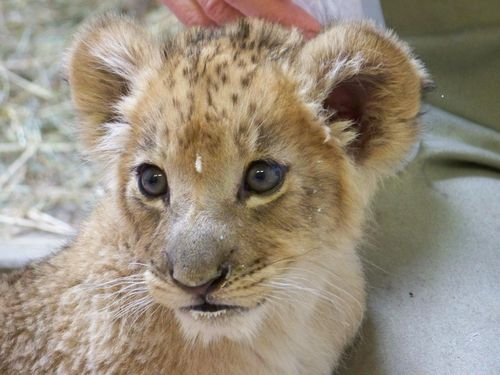 Lions are considered a Vulnerable species by the International Union for the Conservation of Nature (IUCN). Most live in eastern and southern Africa, where their numbers are rapidly decreasing due to habitat loss and conflict with humans. 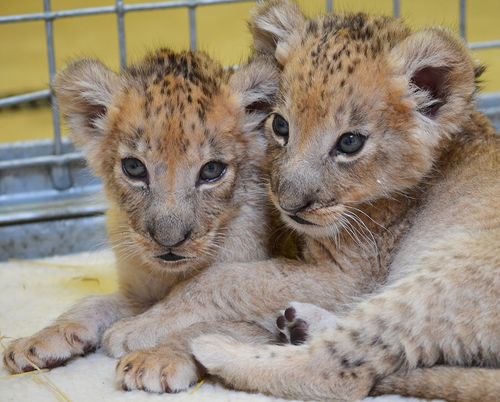 Seneca Park Zoo has welcomed two African Lion cubs born on March 7. The pair, a male and a female, were born to first time parents Asha and Chester. Soon after their birth, in consultation with the Lion Species Survival Plan (SSP) Program, the Seneca Park Zoo’s animal care staff began hand-raising them. This decision became necessary when the mother stopped nursing and caring for her babies. After two months of care by zoo staff, the cubs will re-join their parents. 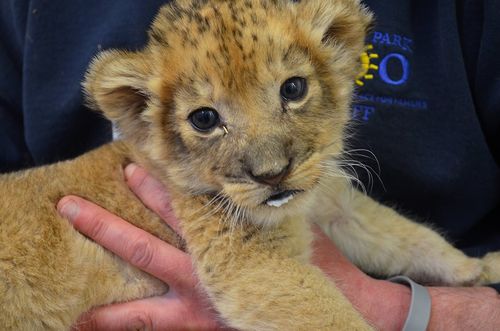 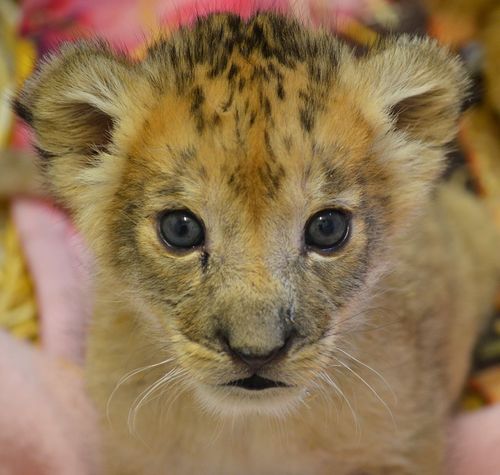 County Zoo Director Larry Sorel said, "Because our lions' genetics ar so valuale to lions in conservation care, it was important we do everything we could to ensure their survival. Lions are considered a vulnerable species by the International Union for the Conservation of Nature. Most live in eastern and southern Africa, where their numbers are rapidly decreasing due to habitat loss and conflict with humans. 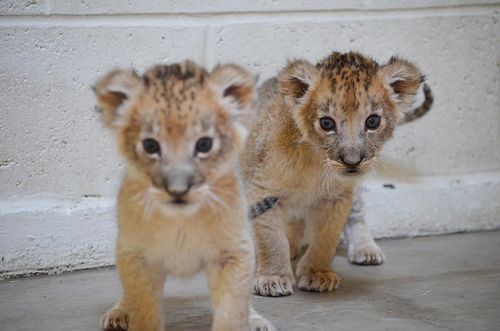 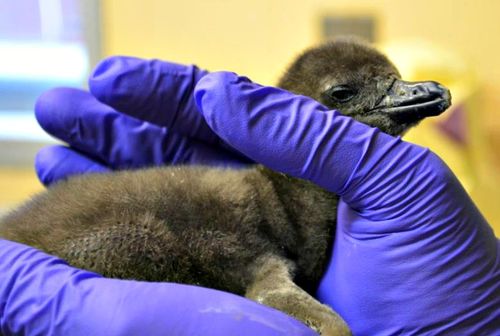 The African Black-footed Penguin flock at the Seneca Park Zoo grew by five chicks in the past month. October through April is the peak nesting season and these tiny additions need lots of help from their caretakers.  The Penguins pictured here range from one day to 18 days old.

On top of the normal two feedings a day, parents who are rearing chicks are offered extra fish daily. Zoo keepers diligently record fish intake, making sure each parent has enough to sustain themselves as well as their offspring. Every other day (from hatch to day 80 – when chicks are weaned from their parents) the Penguin chicks are weighed. If at any time a chick falls below an acceptable weight, night feedings are incorporated into the program. 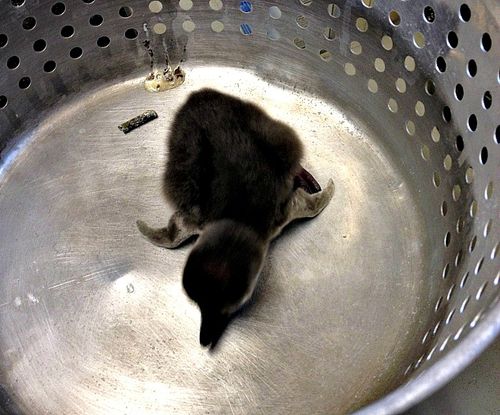 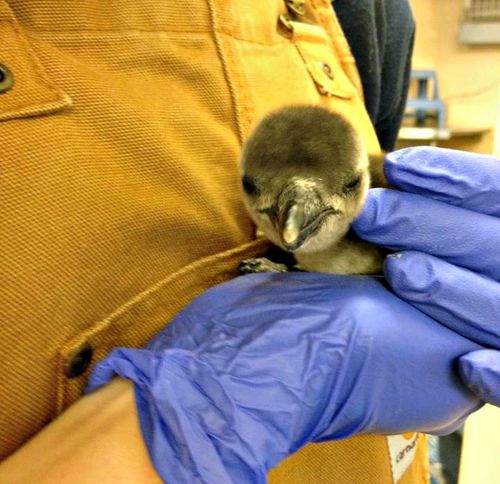 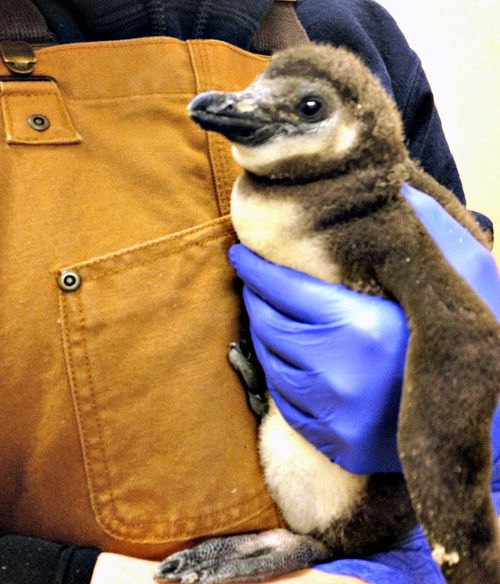 On the days chicks are weighed, keepers also perform a mini physical exam: eyes should be bright and free of discharge, the chick should be vocal and alert, and after a couple of weeks they should be relatively mobile. Just as they would in the wild, parents do all the work, from the moment the egg is laid until the chick is weaned. That said, keepers are the first line of defense if something doesn’t seem quite right within these first, fragile few weeks of life.

In 2010, the African Black-footed Penguin was listed as an endangered species. In the early 1900s, the wild population was estimated at more than 1.5 million individuals. Today about 20,000 birds remain, with a 60% loss of population within the past 30 years. This is largely due to food base declines, competition with the fishing industry and Cape fur seals, as well as a major shift in prey due to changes in their ecosystem. Habitat destruction and oil spills have also contributed greatly to the decline in the African Black-footed Penguin population.

In an effort aimed to help their species, the Penguins at Seneca Park Zoo are carefully managed by a Species Survival Program (SSP). This program is a collaborative effort among AZA accredited zoos and aquariums in North America to breed the most genetically diverse population of this Penguin species.