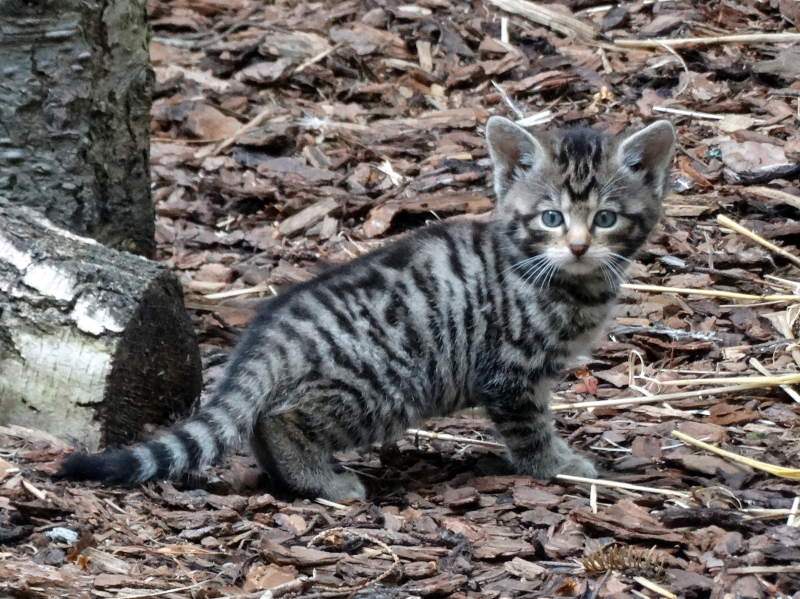 The Royal Zoological Society of Scotland (RZSS) is celebrating the birth of four critically endangered wildcat kittens at Highland Wildlife Park, near Aviemore.

Visitors now have a better chance of spotting the four playful kittens, named Strom, Eilein, Druim and Vaara, after the wildlife conservation charity reopened wildcat viewing areas at the park this week. Guests will be encouraged to wear a facemask in these areas to help keep the animals and others safe. 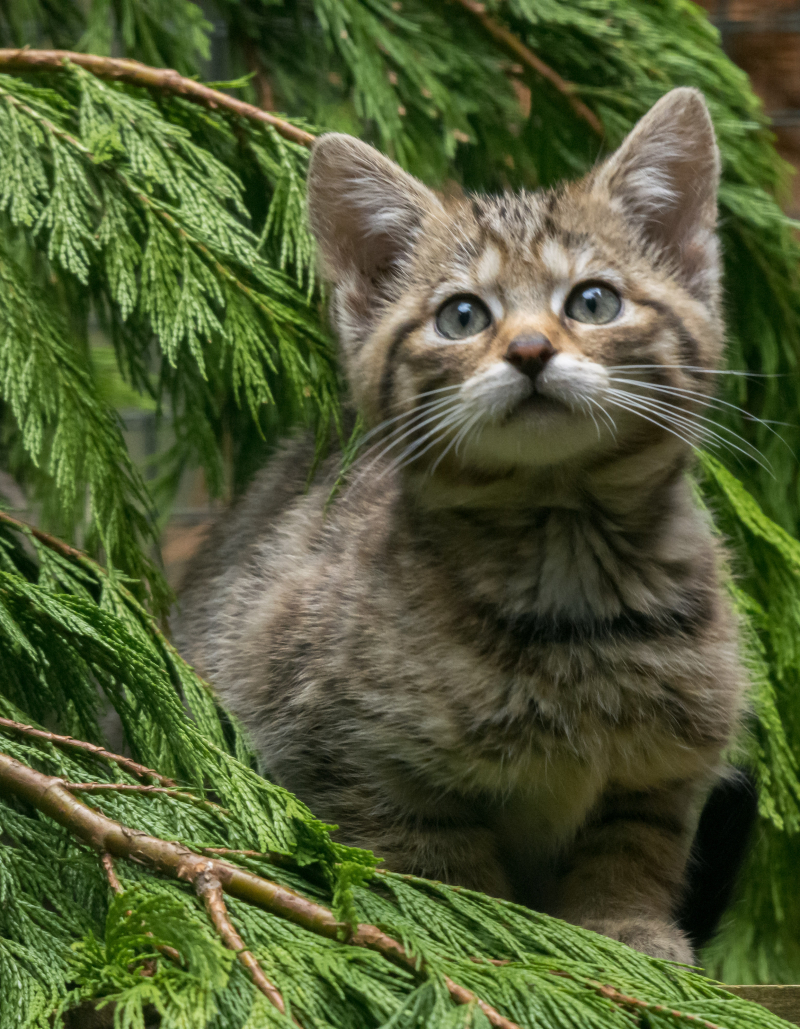 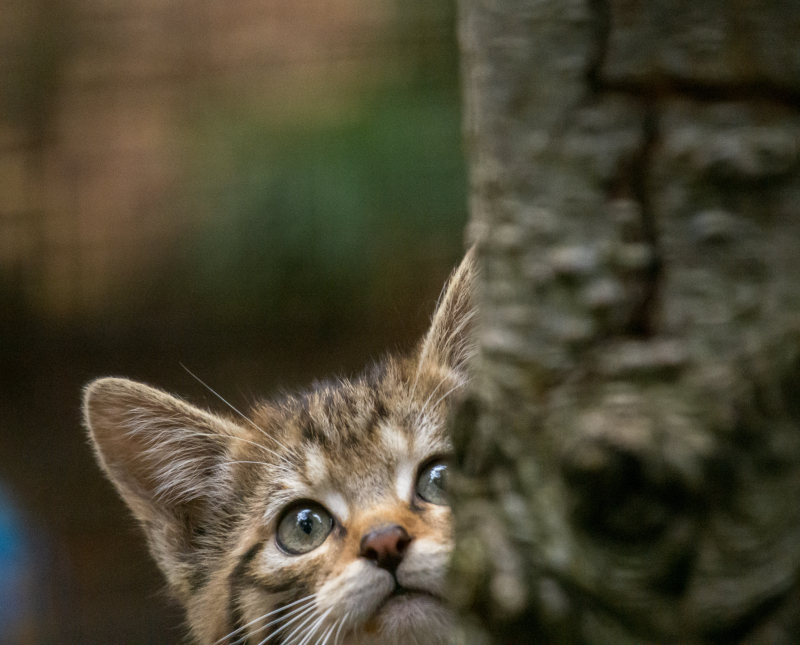 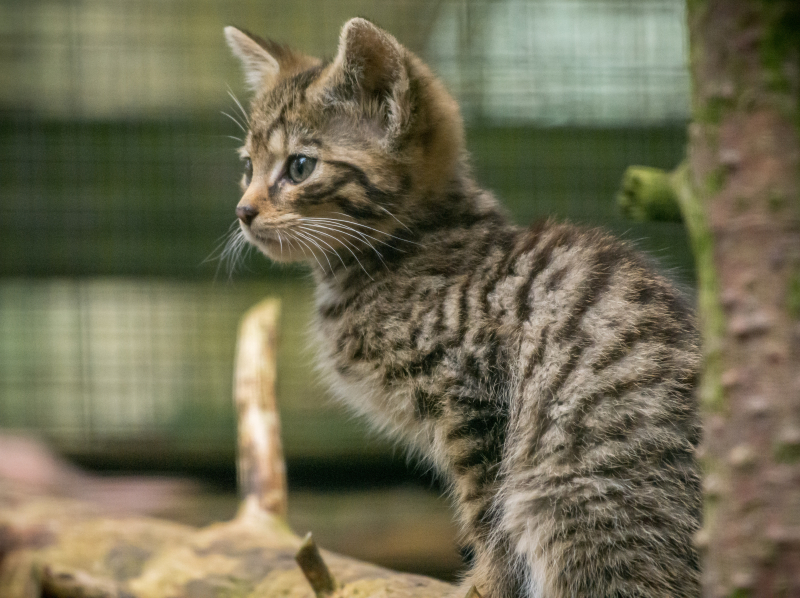 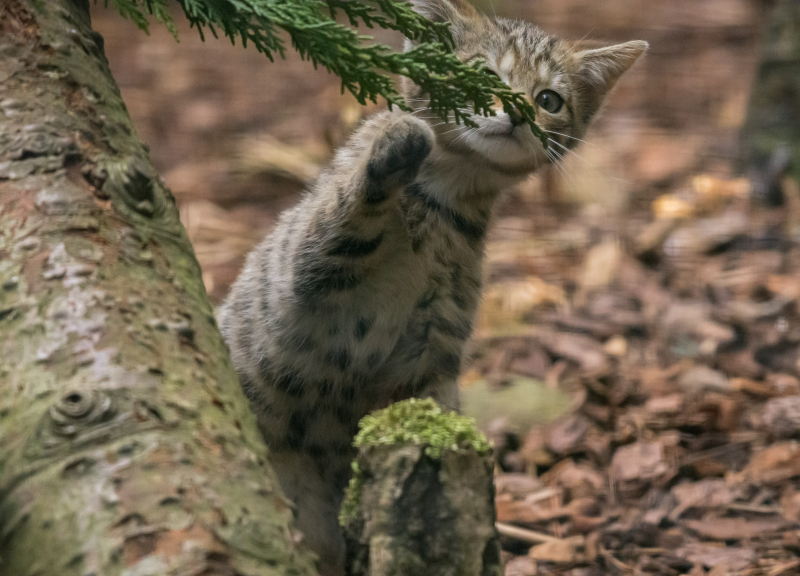 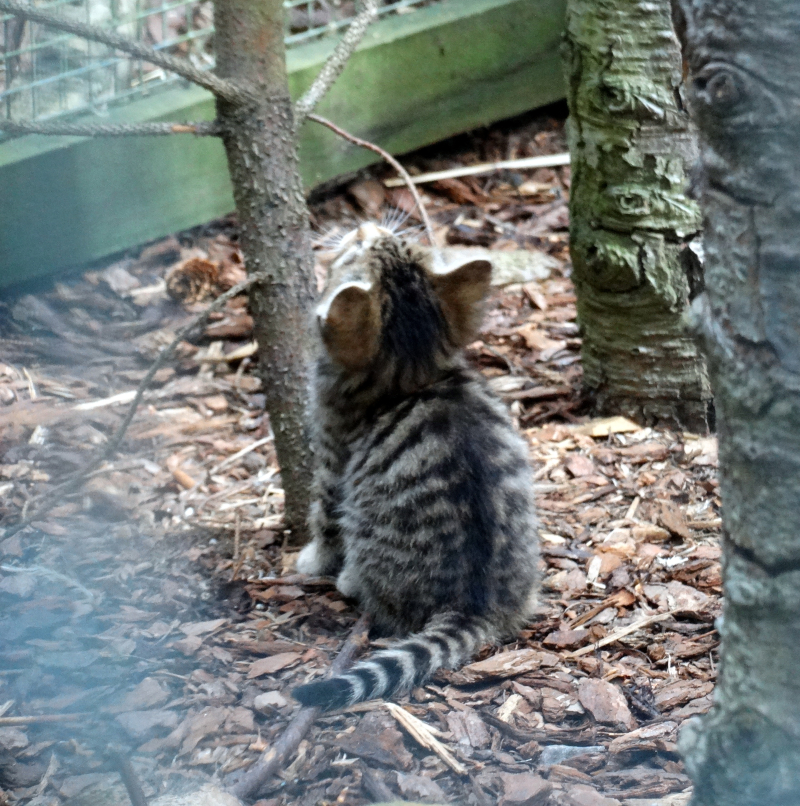 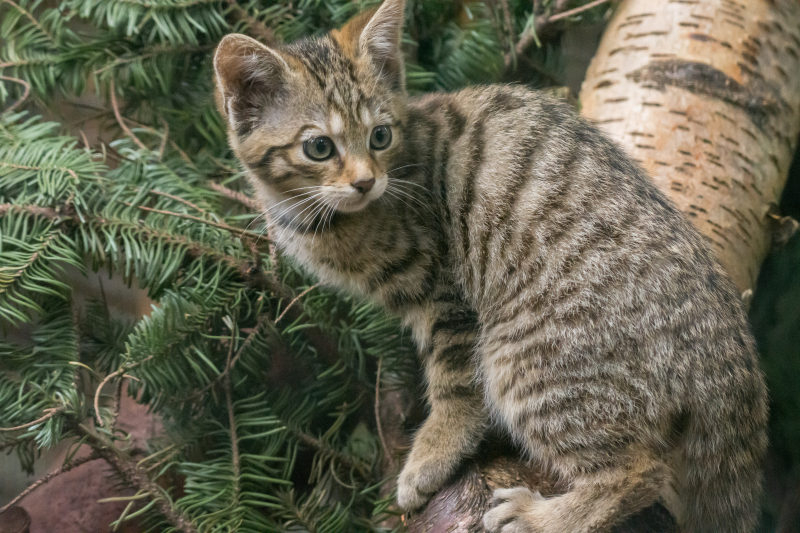 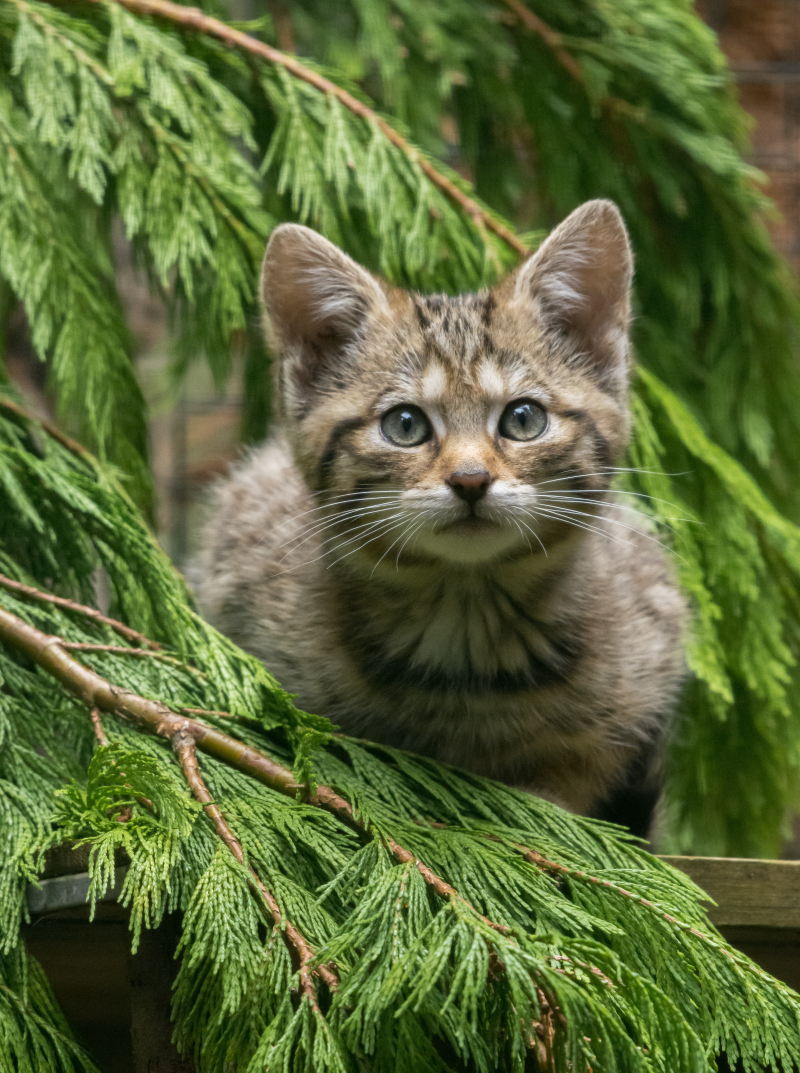 Keith Gilchrist, animal collection manager at Highland Wildlife Park said, “We are thrilled to welcome the birth of four kittens, who were born during lockdown in May, to mum Fiain and dad Blair.

“We have one male, Strom, and three females, Eilein, Druim and Vaara. It has been great watching them grow and it is fantastic to now be able to welcome visitors to meet them too.”

Wildcats are one of Scotland’s rarest and most threatened mammals and RZSS is leading a new partnership project, Saving Wildcats, which aims to secure a future for this iconic species by breeding and releasing wildcats into the wild.

David Barclay, Saving Wildcats ex-situ conservation manager, said, “Following a sad history of habitat loss, persecution and, more recently, breeding with domestic cats, wildcats are on the brink of extinction in Scotland but it’s not too late.

“By bringing together the expertise and skills of national and international organisations, the Saving Wildcats project can secure a future for the Highland tiger by breeding and releasing wildcats into the wild, so every birth is a potential lifeline for the species.”

The conservation breeding and release of wildcats is being carried out by the Saving Wildcats partnership led by RZSS in collaboration with NatureScot, Forestry and Land Scotland (FLS), The Cairngorms National Park Authority (CNPA), Norden’s Ark and Junta de Andalucía.

The project is funded with the contribution of the LIFE Programme of the European Union and the generous support of the Garfield Weston Foundation, The National Trust for Scotland, The People’s Trust for Endangered Species and The European Nature Trust. 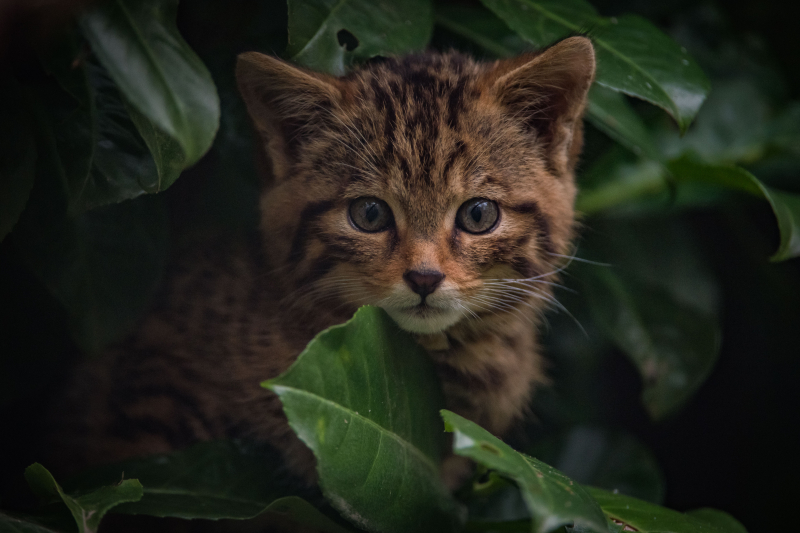 A rare Scottish Wildcat has been born at Chester Zoo. The female kitten is part of a breeding programme that is striving to save Britain’s rarest mammal from extinction.

As few as 100 Wildcats – also known as the ‘Highland tiger’ – are estimated to remain in the UK.

The animals once thrived in Britain but were hunted to the brink of extinction for their fur and to stop them from preying on game birds. As the only remaining wild feline species, Scottish Wildcats are now protected under UK law but are still under huge threat from habitat loss, crossbreeding with domestic cats, and disease. 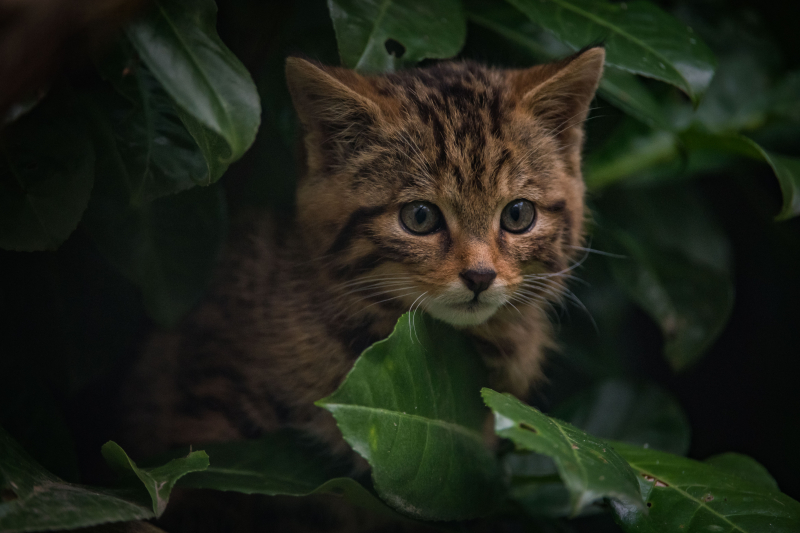 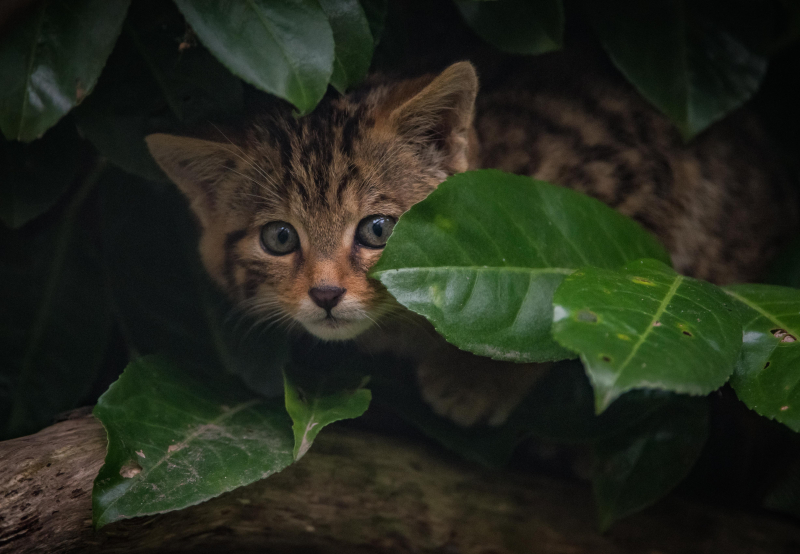 Chester Zoo is one of a number of conservation partners, which form Scottish Wildcat Action - a coordinated effort to bring the tenacious hunters back from the brink.

Conservationists have hailed the latest kitten as “another lifeline for the species” and it is hoped that future generations will be reintroduced to the wild.

Tim Rowlands, the zoo’s Curator of Mammals, said, “Unlike domestic cats who can have several litters a year, Scottish Wildcats will usually only have one, so every birth is really, really significant.”

“The kitten was born to parents, Einich and Cromarty, in August but, given their incredibly elusive nature, had not been caught on camera until now. It’s ever so special to see just how active the kitten already is and how she’s already starting to practice the skills that these magnificent, stealth hunters use to pounce on their prey.”

Tim continued, “Conservation breeding in zoos is a key component in the wider plan to prevent Scottish Wildcats from disappearing altogether – and each new arrival offers another lifeline for the species. The hope is that the safety net population being bred by our carnivore experts will be released into the highlands of Scotland in the future. We’re very much part of the vision to restore and maintain a wild population of the stunning Scottish Wildcat for the long term.” 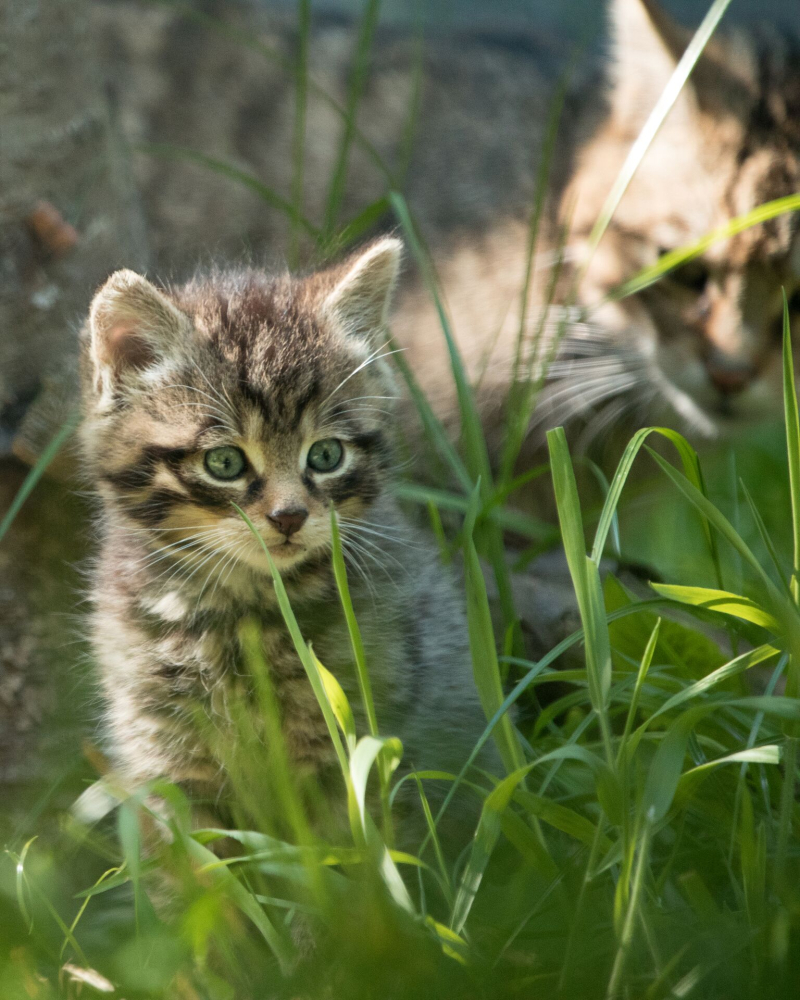 Two rare Scottish Wildcats, born at the Royal Zoological Society of Scotland’s Edinburgh Zoo, may help provide a lifeline for the iconic species.

The kittens will join a conservation breeding programme, which it is hoped will save the species from extinction in the wild through future reintroductions.

“Wildcat populations have suffered a sharp decline in Scotland in recent decades with studies suggesting there may be as few as 115 Scottish Wildcats left in the wild, making them one of the UK’s most endangered mammals. Our conservation breeding programme and work with partners in Scottish Wildcat Action, the national conservation project, is therefore vital.”

David continued, “Every birth is a potential lifeline and improves the chances of a genetically healthy population that can act as a source for future wildcat release.”

Born in April, the kittens have recently started to emerge from their den and explore their habitat. 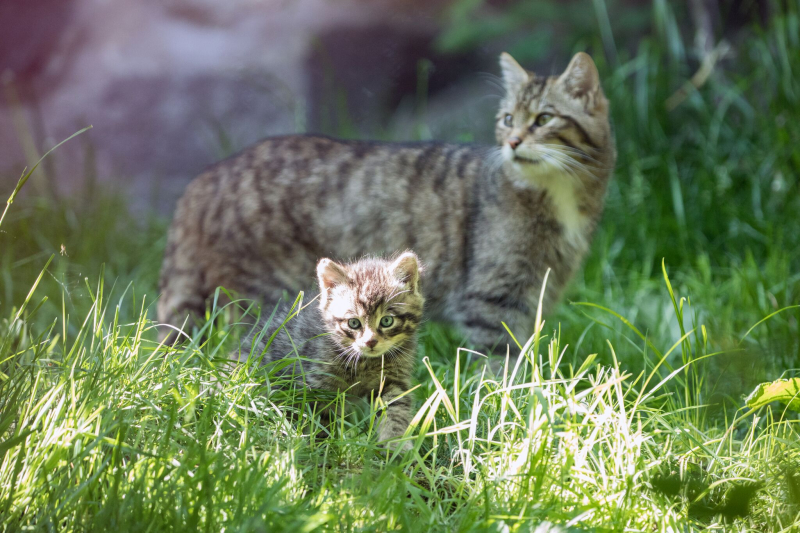 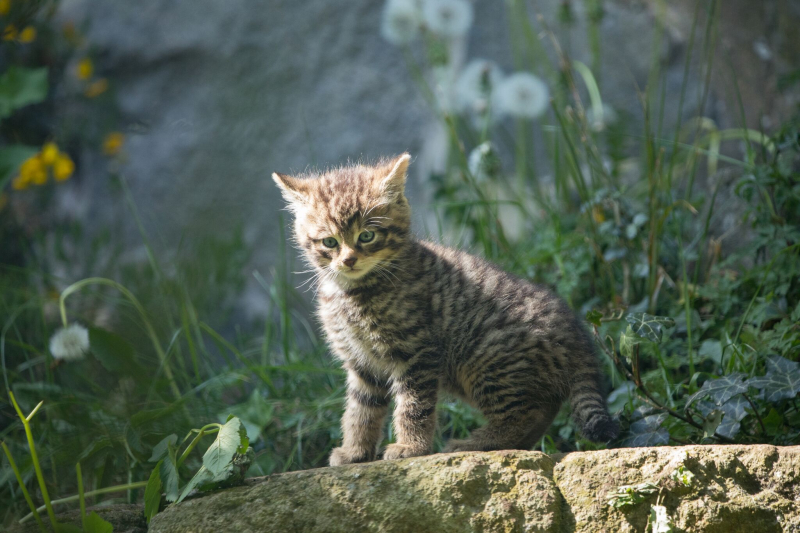 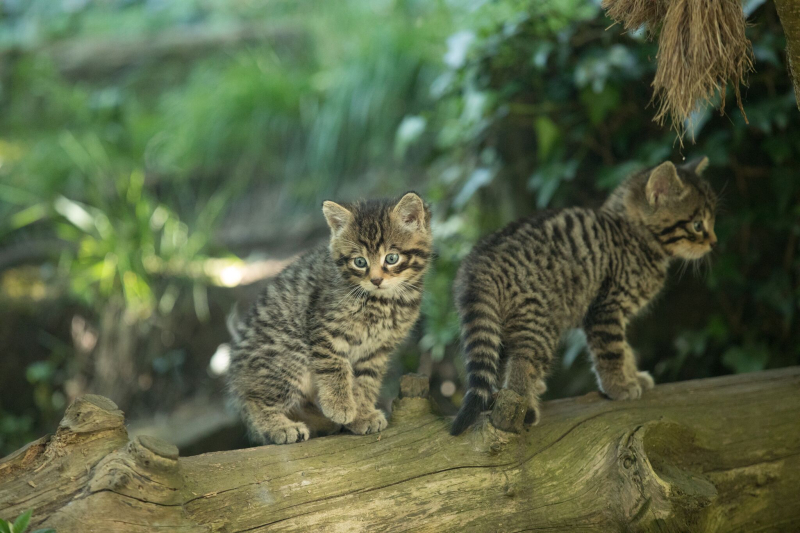 Although some similarities with domestic tabby cats exist, the two are not to be confused. The Scottish Wildcat (Felis silvestris) is the same species of wildcat found in continental Europe, but it has been separate since the end of the last ice age, around 9,000 years ago.

Males of the species are around 3.77–7.26 kg (8.3–16.0 lb), while females are smaller at 2.35–4.68 kg (5.2–10.3 lb). Scottish Wildcats have heavier skulls than domestic cats. They also have a larger body size. Their coats are distinctive, solid-striped tabby patterning without white feet. The tail is thick with a black, blunt tip and thick black stripes.

RZSS is a key partner in Scottish Wildcat Action, the first national project to save the highly threatened species from extinction. Scottish Wildcat Action brings together more than 20 other organisations in the conservation, scientific and land management communities, supported by Scottish Government and the Heritage Lottery Fund. Learn more at: http://www.scottishwildcataction.org/about-us/#overview 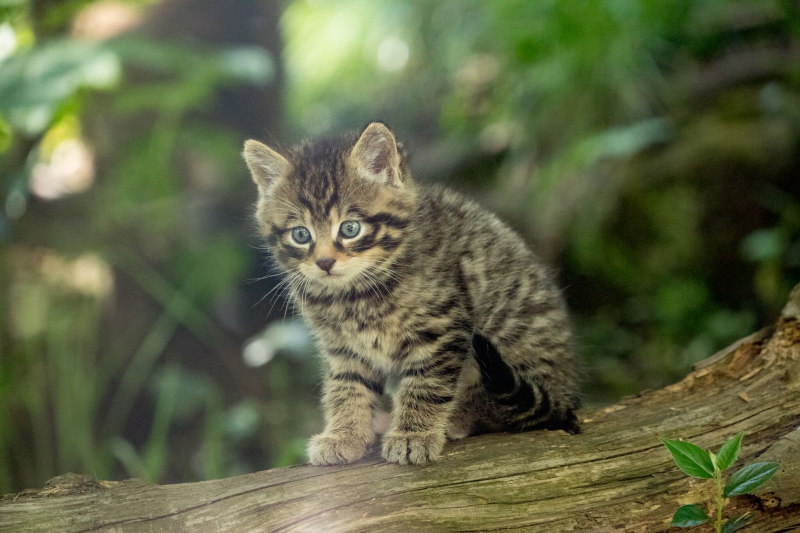 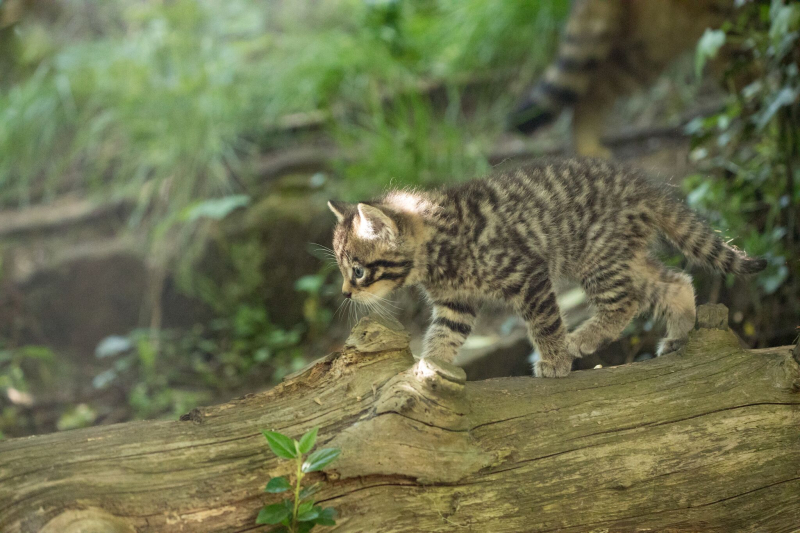 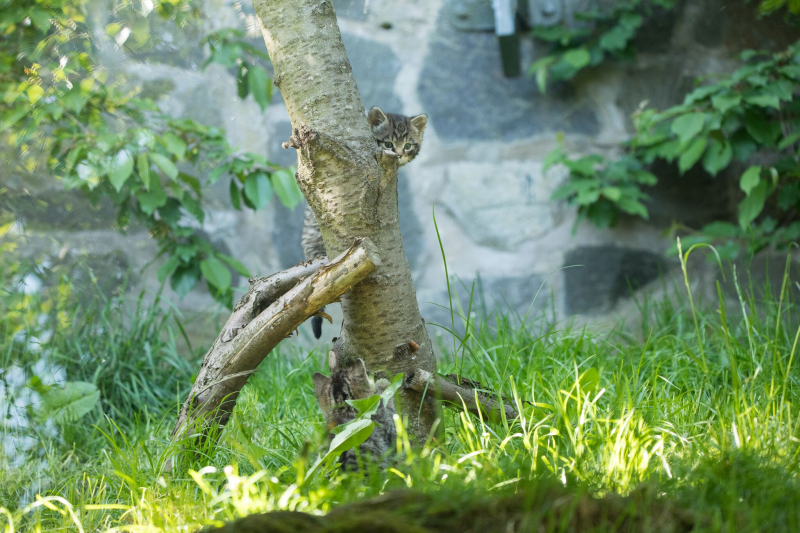 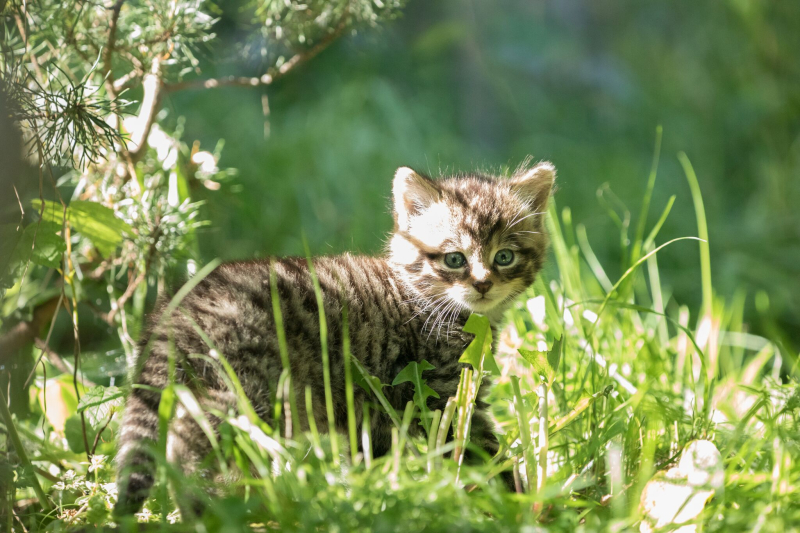 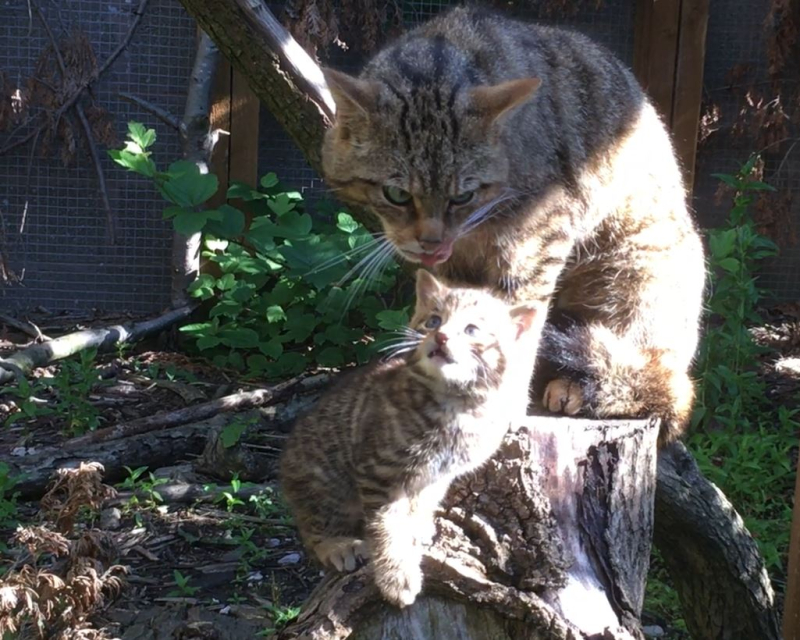 Chester Zoo has released amazing video footage they captured of a rare Scottish Wildcat kitten, bred at the Zoo, emerging from its den for the first time since birth.

The endangered wildcat was born on May 13, and keepers do not yet know its sex.

The arrival of the kitten (the first to ever be born at the Cheshire, UK zoo) has given a big boost to a conservation programme, which is working to bring Britain’s rarest mammal back from the edge of extinction.

Experts believe there could now be fewer than 100 individuals left in the wild, making the Scottish Wildcat, or ‘Highland Tiger’ as it is affectionately known, one of the most endangered populations of cats in the world.

Wildcats once thrived in Britain but were almost hunted to extinction for their fur and to stop them preying on valuable game birds. They are now protected under UK law but remain under huge threat from crossbreeding with feral and domestic cats, habitat loss, and accidental persecution. 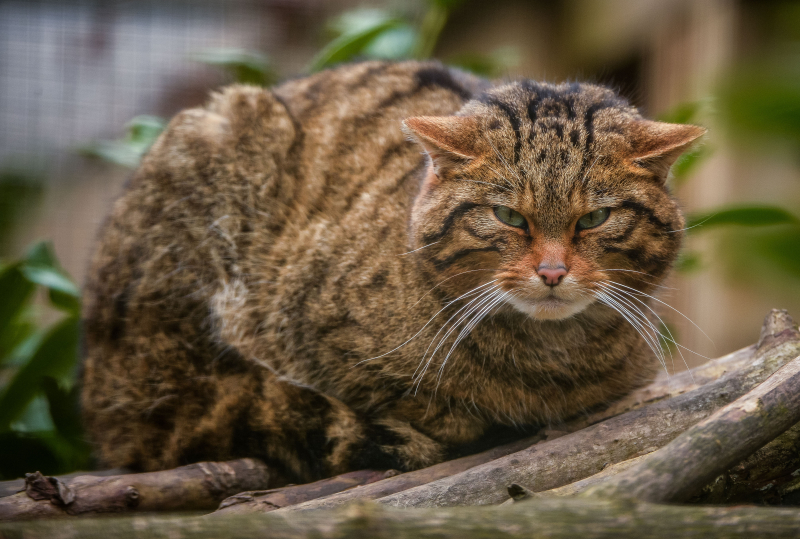 A coordinated action plan to save the highly threatened animals, named Scottish Wildcat Action, has been devised to protect the species and involves over 20 conservation partners including Scottish Natural Heritage, the Scottish Government, The Royal Zoological Society of Scotland (RZSS) and the Forestry Commission Scotland, as well as Chester Zoo’s Act for Wildlife conservation campaign. Conservation breeding in zoos, for their eventual release, has been identified as an important component in the long-term recovery plan for the animals.

Tim Rowlands, Chester Zoo’s Curator of Mammals, said, “The arrival of the new kitten is a major boost to the increasingly important captive population in Britain. It was born in May but has spent the first few months safely tucked up in its den with mum, Einich, and has only recently gained enough confidence to venture out and explore. It won’t be too long until this little kitten grows into a powerful predator.

“Conservation breeding in zoos is a key element in the wider plan to conserve the species in the UK and, drawing on the unique skills, knowledge and knowhow of the carnivore experts working here, we’re breeding Scottish Wildcats to increase the safety net population and hope to release their offspring into the highlands of Scotland in the future.

“In tandem with our breeding programme, we’re also supporting monitoring work in the Scottish highlands and have funded camera traps that are being used to identify areas where wildcat populations are thriving or suffering.

“This project is of national importance and shows what an important role zoos can play in helping to save local species. We’re very much part of efforts to maximise the chances of maintaining a wild population of the stunning Scottish Wildcat for the long term.”