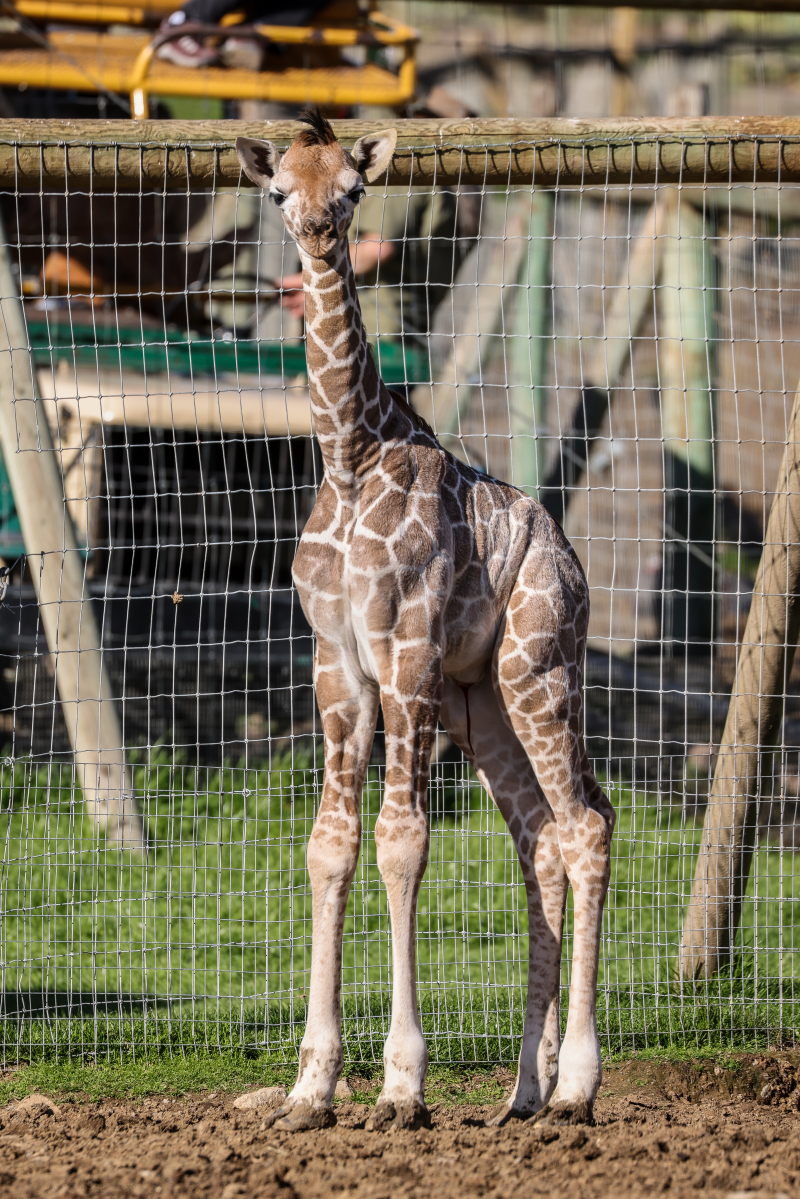 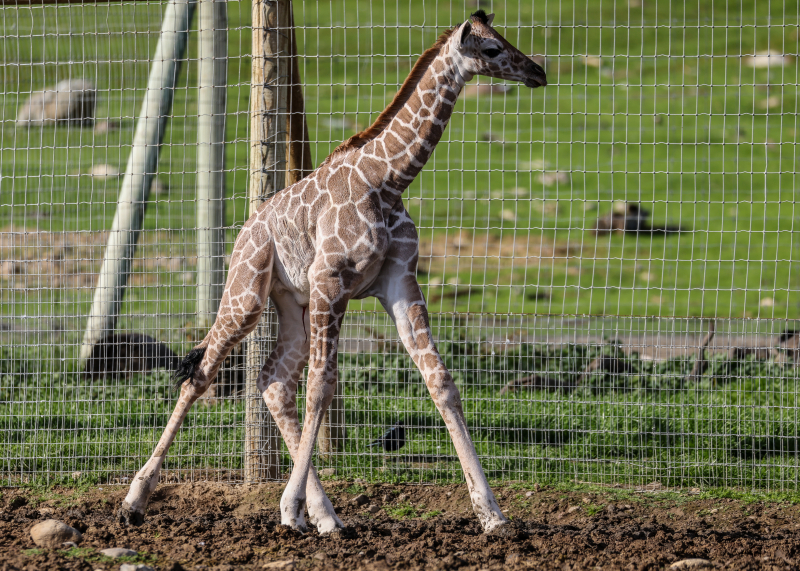 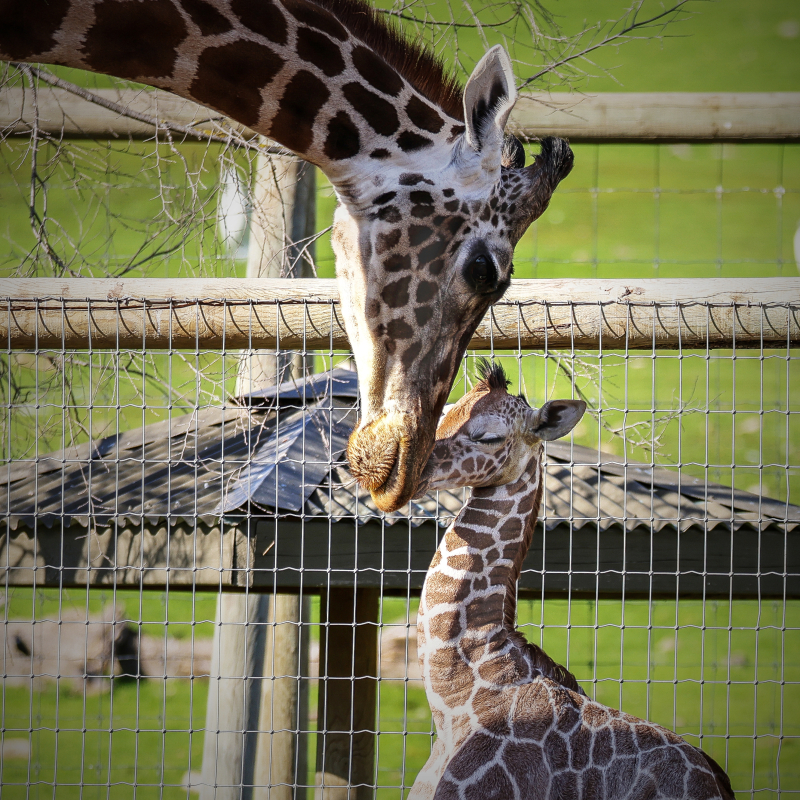 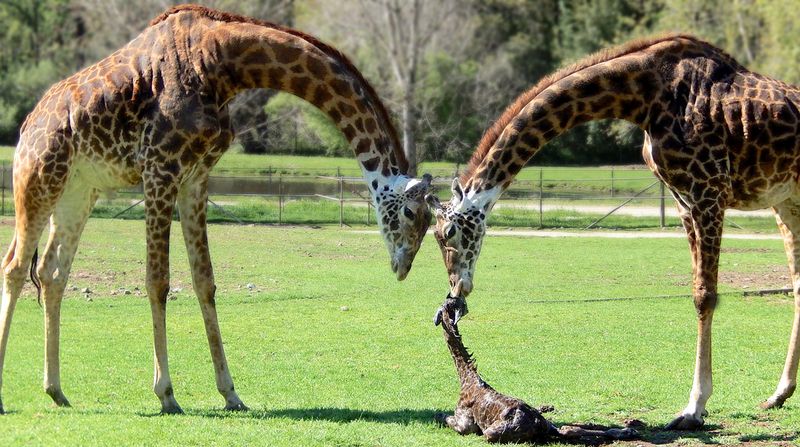 On April 14, Jamala, a 16 year-old Masai Giraffe gave birth to a calf at Safari West in California. The  gangly, six foot (1.8 m) male calf weighs about 120 pounds (54 kg) and has been named Phoenix. He’s gentle, playful and full of spirit! He was born on the eve of the total lunar eclipse, making the birth all the more unique and exciting for the zoo.

This is the third calf for father, 11-year-old Tufani, and Jamala’s fourth baby. The Masai Giraffe, also known as the Maasai Giraffe or Kilimanjaro Giraffe, is the largest subspecies of giraffe and the tallest land mammal. They are typically the darkest of the subspecies. 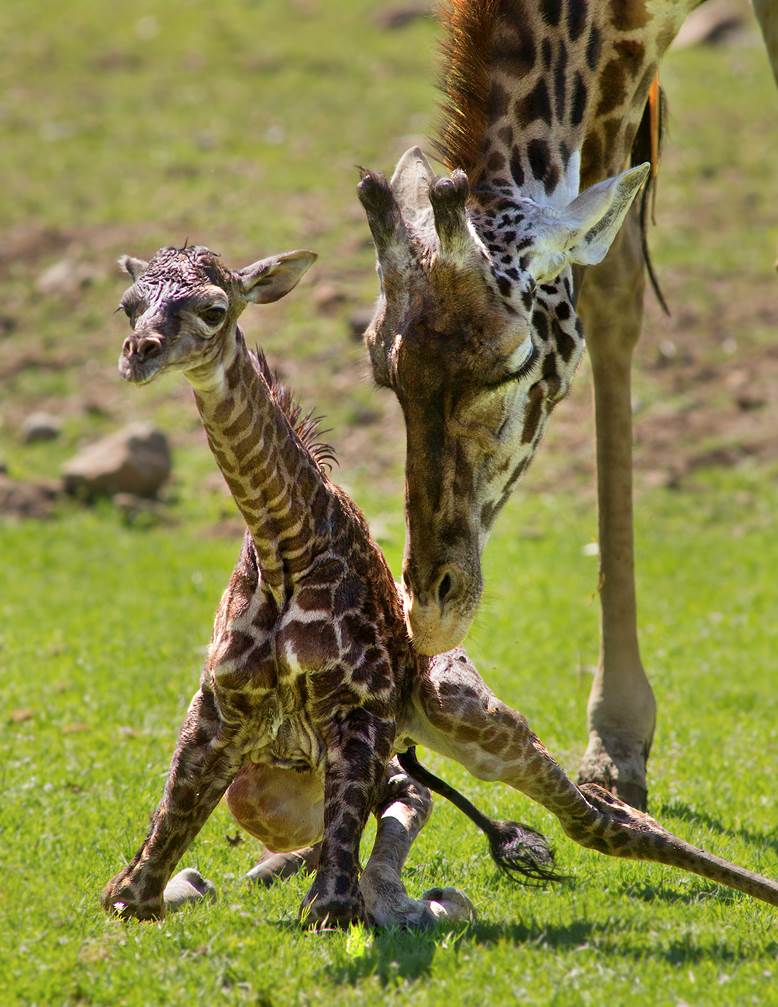 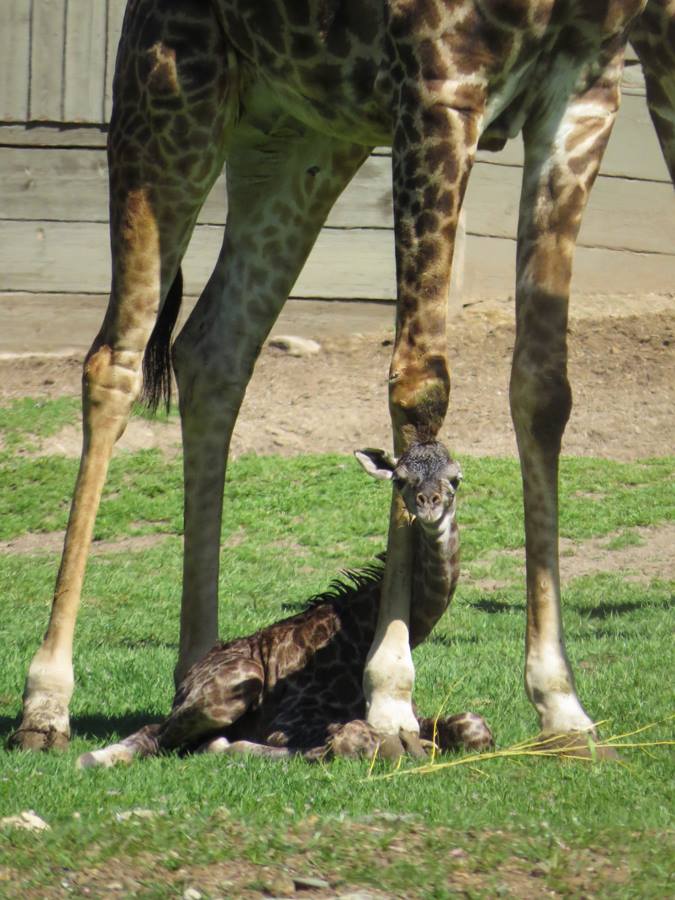 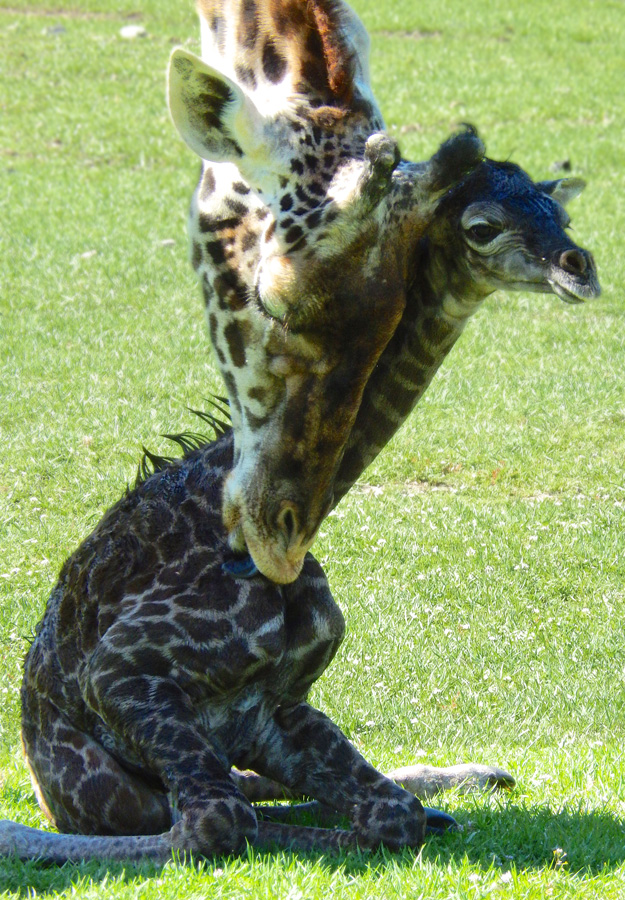 A leg first emerged at approximately 9am. His head was visible at 9:30am. Typical of giraffes, his life started with a six foot plunge. He was born at 10am and stood at 10:30am. The calf nursed soon after standing. MaThe baby will soon be out with the other giraffes, playing together and chasing the cranes or just having fun like giraffes do. This makes the twenty-seventh baby giraffe born at Safari West and the third Masai Giraffe baby.

There are only one hundred Masai Giraffes in North America in just 20 different locations, as recorded by According to the International Species Information system. According to the Giraffe Conservation Organization, Masai Giraffes may be the most populous of the sub-species with an estimated fewer than 40,000 remaining in the wild, though recent reports of significant poaching would suggest it likely to be significantly less.

Can This Be Real!? 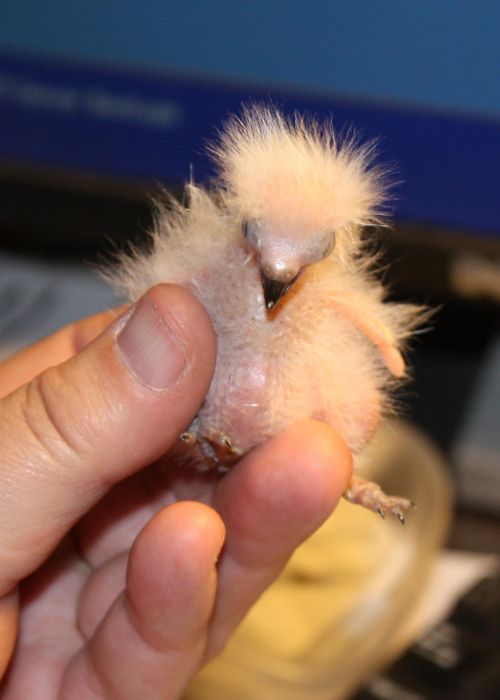 It's a 6-day-old Rainbow Lorikeet and its hatching was announced yesterday by The Safari West Zoo in Santa Rosa, California. Lorikeets are native to Australasia and the brightly colored birds are found in Australia, eastern Indonesia (Maluku and Western New Guinea), Papua New Guinea, New Caledonia, Solomon Islands and Vanuatu.

Fennec Fox Kits Bella and Bill Are an Earful 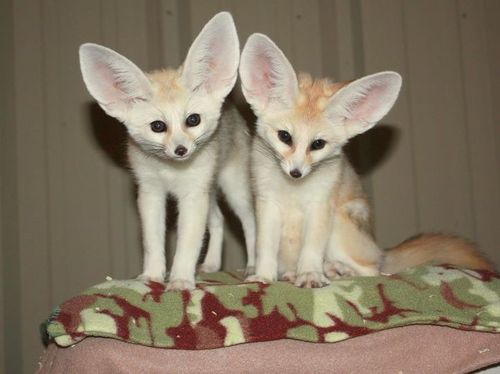 The pair (as well as their radar-like ears!) are growing up fast. Join us on Facebook to caption this photo in the comments section. 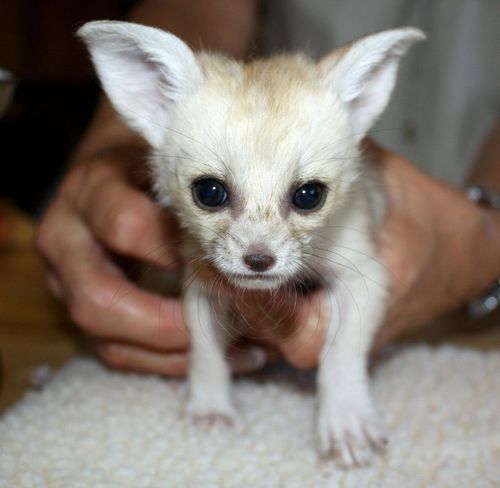 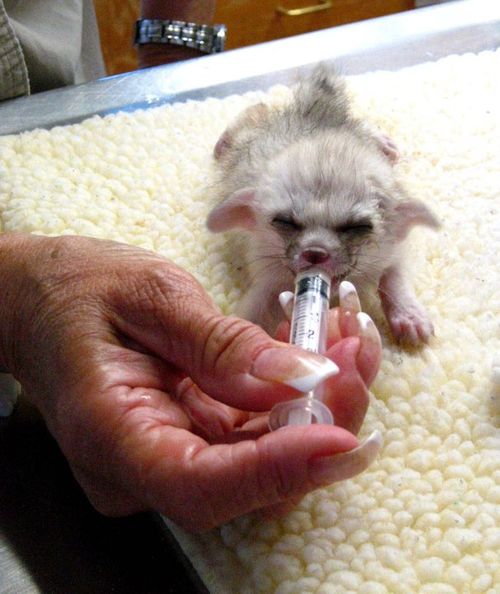 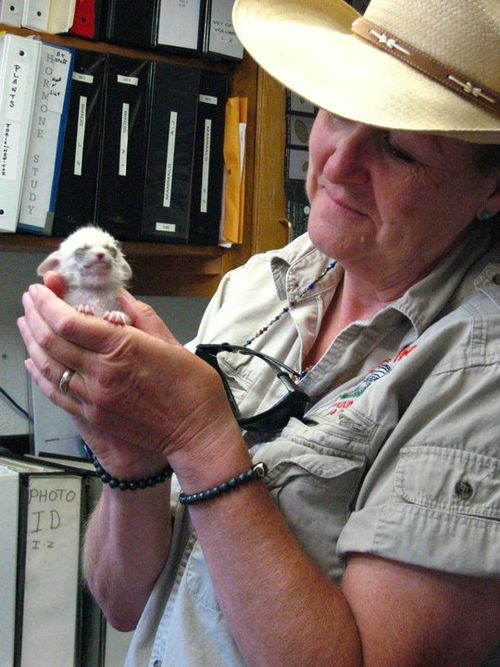