The “Baby Boom” continues at the Milwaukee County Zoo, with a red panda birth on June 12!  This is the third cub for mom, Dr. Erin, and father, Dash.  The female cub is part of the Red Panda Species Survival Plan® (SSP), which helps to maintain genetic diversity within red panda populations in AZA-accredited zoos. These two precious female cubs were welcomed into the world on Wednesday the 8th of December, making them just one day off being exactly four months. Taronga's Carnivore Keepers worked closely with some special partners and have decided on the names Daiyu - which means 'black jade' and Zeya meaning success. 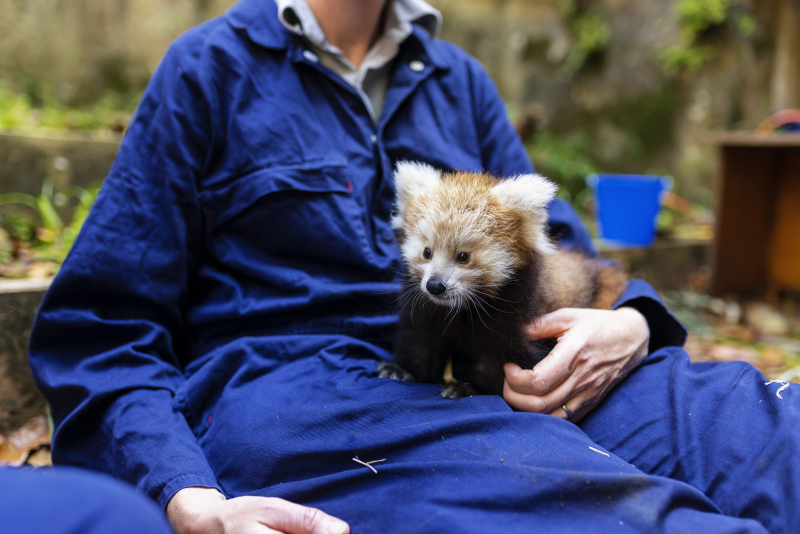 MORE PHOTOS BELOW THE FOLD

We are beyond excited to share with you a close-up glimpse of Taronga's latest arrivals - two adorable female Red Panda Cubs! 🥰 🐾

This delightful footage was captured during the cub's regular weigh-ins with keepers reporting that both cubs are growing and developing very well and are weighing in at approx. 1kg! 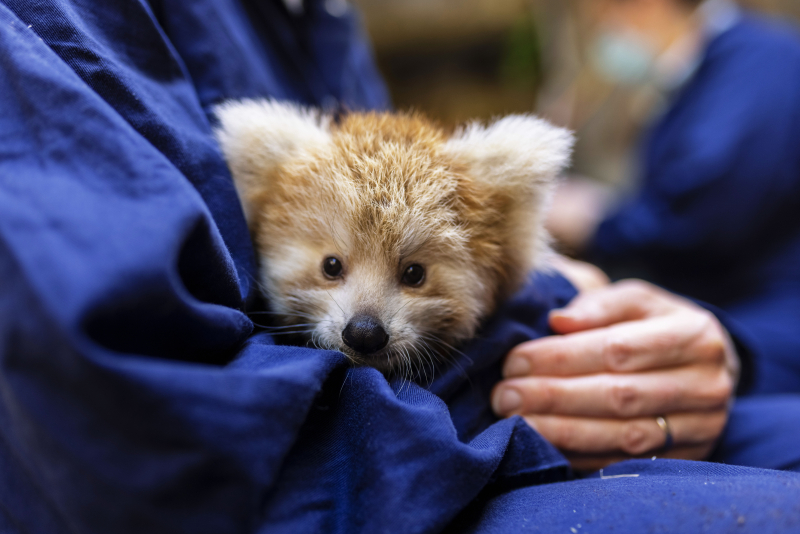 To get your regular fix of #cubcontent don't forget to check out the new Red Panda Cam at 👉https://www.taronga.org.au/redpandacam

You most certainly know Zoo de Beauval’s Giant Panda Cubs Huanlili and Yuandudu! But did you know that other "panda" twins were born in Beauval last summer? They are Kamala and Nuo, 2 young red pandas (who are brother and sister)! A look back at their first months in episode 2 of the zoo’s series Un Oeil en Coulisse!

And discover their commitment to preserve animal species on: beauvalnature.org

The Zoo Boise red panda cubs, born June 21, 2021, were extremely active in the snow last week. Check out this video of the pair playing in the snow while it was still dark outside.

Zoo Boise has turned the act of visiting the zoo into a conservation action. Since 2007, visits to Zoo Boise have generated more than $3 million towards the conservation of animals in the wild, redefining why we have a zoo. Zoo Boise is accredited by the Association of Zoos & Aquariums, a national organization that supports excellence in animal care, conservation, education, and science.

The two red pandas recently born at The Netherlands’ Amersfoort Zoo have been given names: “The female is called 'Suki' and the male is called 'Hikaru'. “Suki” means “love”, “Hikaru” means “brilliant”, says animal caretaker Saskia van Soest. “The animals were born in July, but sexing, and therefore also naming, takes place when the young are a bit older. The pandas are doing very well and they are exploring their enclosure to the fullest.” 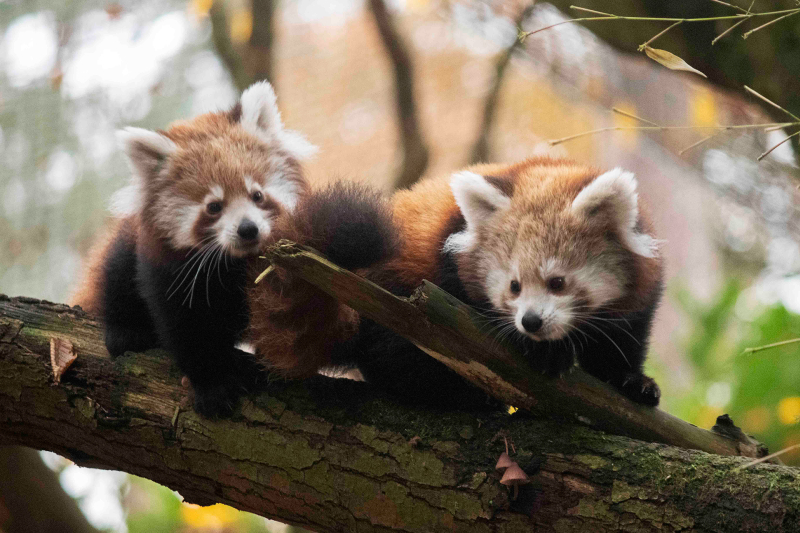 Red pandas are native to the Himalayas in Southeast Asia.

“We are very happy with the young pandas, because this species is not doing well in the wild. With their fluffy fur and dark brown eyes, they have a great appeal to people and are very popular as pets. Many people therefore bring a panda into their home,” explains Saskia. Also, due to poaching and felling, only 10,000 red pandas are left in the wild. The Amersfoort Zoo Wildlife Fund therefore supports the Red Panda Network, which trains the local population to become forest rangers. These 'forest police' keep control of the panda's habitat.

Baby Red Pandas Are Out And About At Idaho Falls Zoo

The baby red pandas born in July at Idaho Falls Zoo at Tautphaus Park are thriving and can even be seen out on exhibit. As of Friday Oct. 29, Paprika is 2.4kg and Saffron is 2.0kg. They’re growing steadily and are very healthy. They have started to venture out on exhibit and are showing more and more independence.

Back in late July, ZooBorns reported on the birth of two red panda cubs at Potawatomi Zoo in South Bend, Indiana. (https://youtu.be/WMSmAf6P-iU)

One of these precious babies needed to be hand-reared by Zoo staff due to respiratory difficulty.

The other cub remained with mom behind the scenes. Both have continued to thrive.

Zoo staff have worked tirelessly toward the goal of reuniting the fuzzy family.

This video shows the growth of the cubs over the last several months, as well as the

successful reintroduction of the hand-reared cub to mom and sibling. (Wait for it!)

Potter Park Zoo had another reason to celebrate July 4 when two red panda cubs were born in the early morning hours, making Maliha a second time mother. The cubs have been resting in an off-exhibit nest box under their mother’s care. Veterinary staff has conducted regular weight and wellness checks since then to monitor their growth and development, and animal care staff monitor mom and the cubs daily through a camera mounted in the nest box. 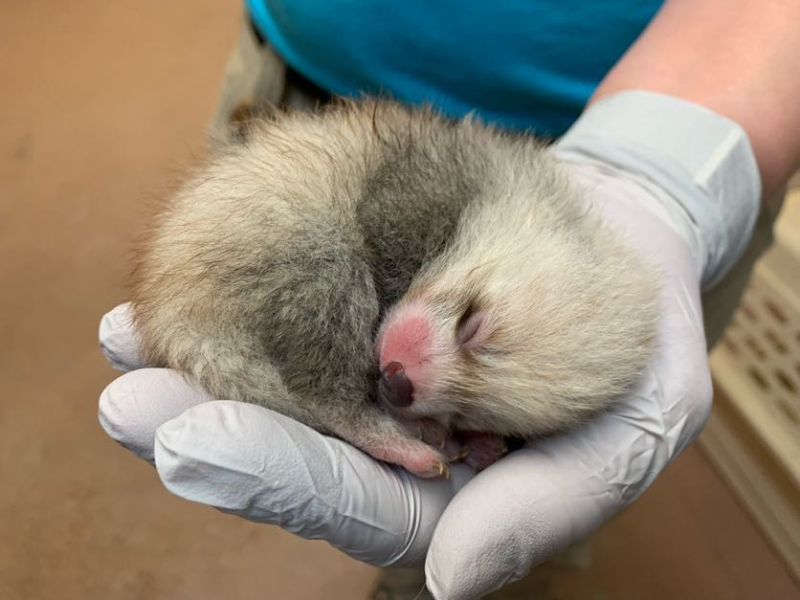 “It’s a special privilege to welcome red panda cubs, and we are all thrilled,” said Liz Jagenow, Maliha’s primary trainer. “Maliha has proven to be an attentive mother and we are confident the cubs are in good hands”.

Maliha’s mate, Deagan-Reid, arrived from Zoo Knoxville earlier this year, and the two bred shortly after. This birth marks Maliha’s second litter, following two cubs with a different male in 2016. In both cases, the pairings were recommended by the Association of Zoos and Aquariums (AZA) Species Survival Plan (SSP) for red pandas, which matches animals carefully by genetic profile. Her new cubs will join a valuable population of fewer than 220 red pandas in AZA institutions across the country.

“Maliha and the cubs are part of a much larger picture,” said Zoo Director Cindy Wagner. “Potter Park and other AZA accredited zoos work in close cooperation to maintain a healthy red panda lineage, and these births are the result of careful planning and preparation”.

Red panda newborns are deaf, blind, and small enough to fit into an average adult’s palm. It takes over 2 weeks for cubs to open their eyes, and about month before they begin venturing out of their nest. Until then, Maliha and the cubs will remain off-exhibit. However, footage from a nest box camera will be shared on Potter Park Zoo’s social media. Deagan-Reid will remain in his outside habitat for all to visit.