A furry little face has popped out to say hello at Adelaide Zoo in Australia!

The Quokka joey made its debut this week, wiggling its nose out from five-year-old Yiray’s pouch.

Quokka joeys live in their mother’s pouch for around five months before making their way out to explore the world. 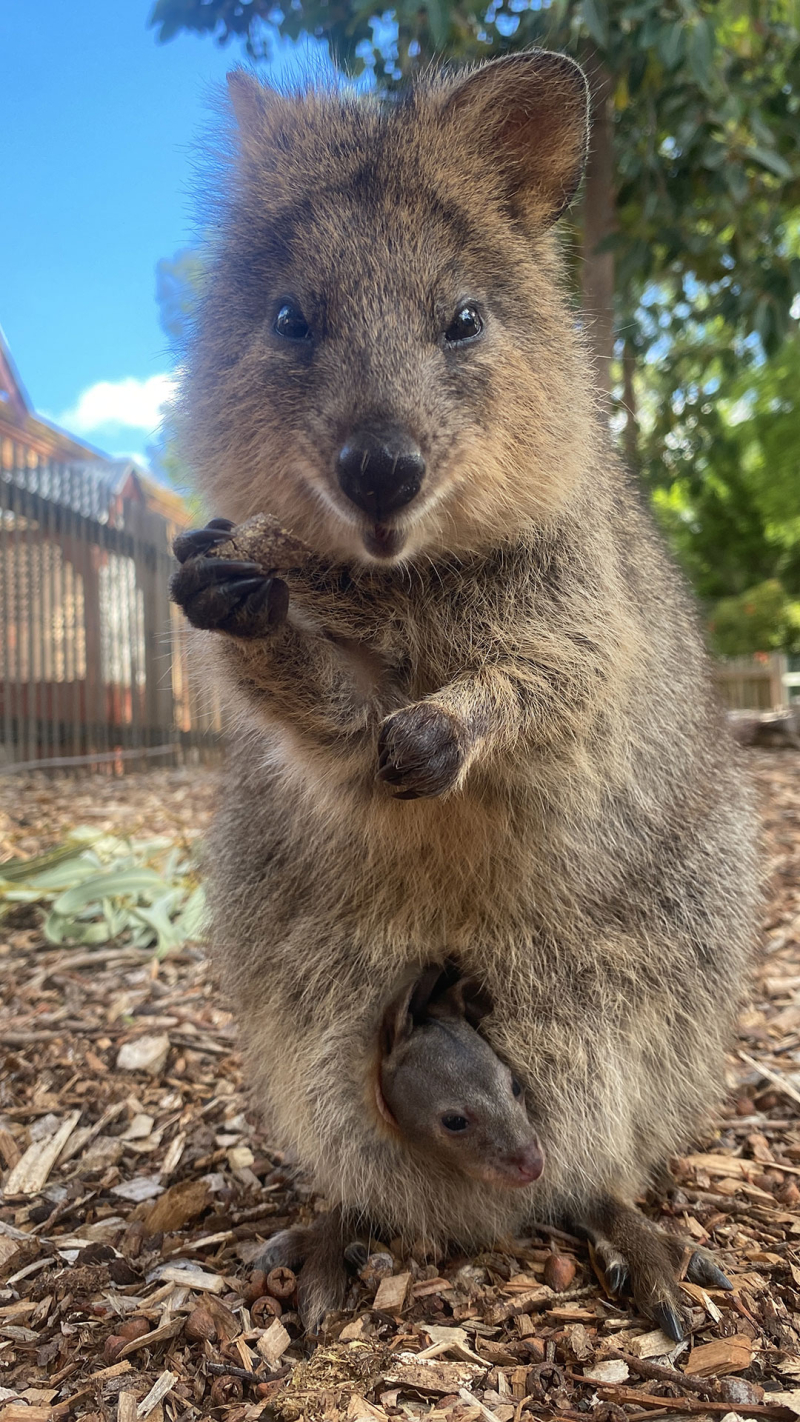 Senior Keeper Nature Theatre, Michelle Birkett, said it was very exciting moment for the team to see the little one appear.

“Yiray has definitely been eating for two, she has been getting into all the snacks!” she said. 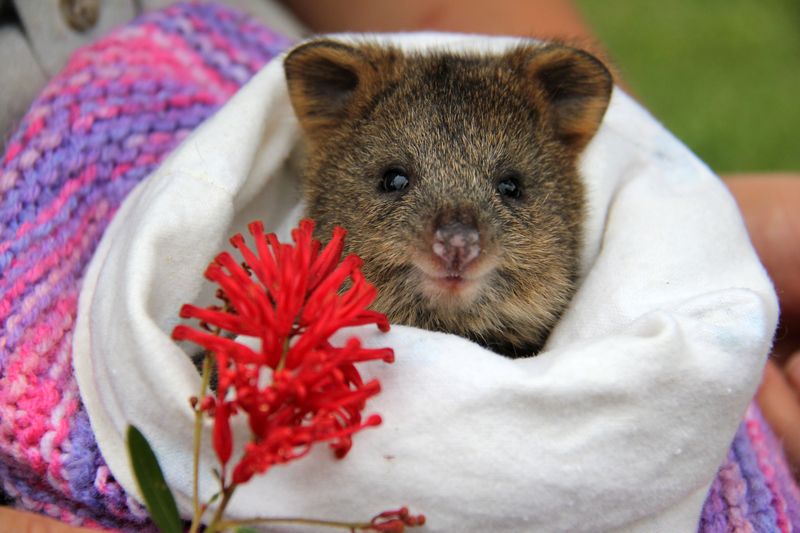 A Taronga Zoo keeper has begun the round-the-clock task of caring for a six-month-old Quokka, one of three joeys born at the Zoo this breeding season. 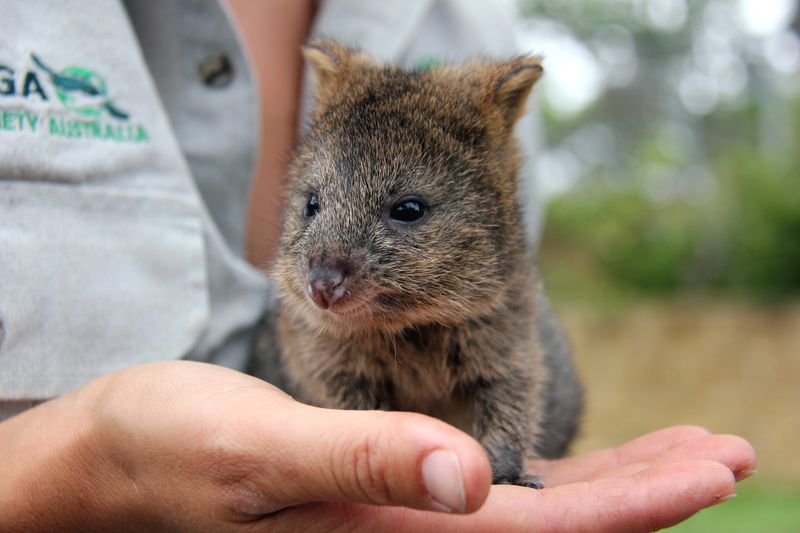 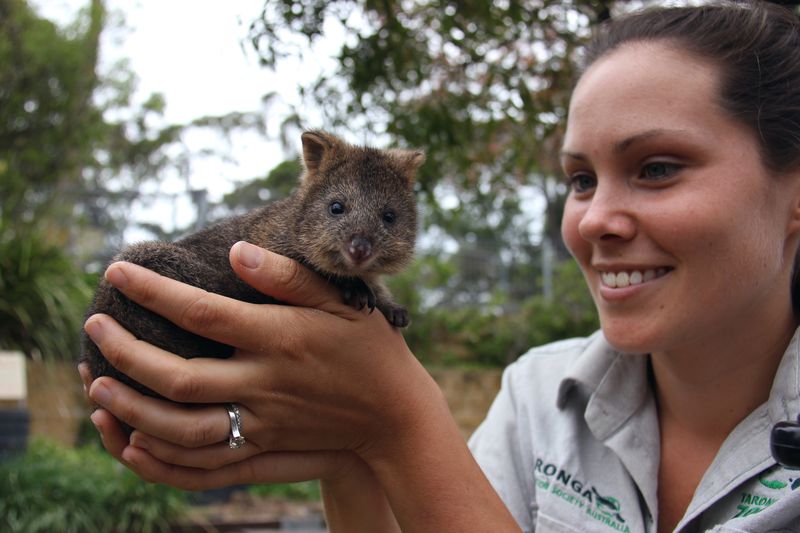 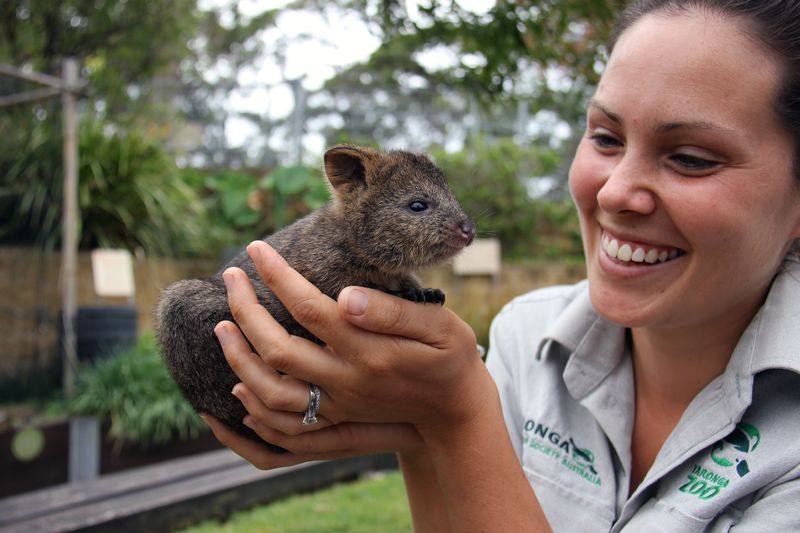 Keeper Bec Russell-Cook has spent the past week carrying a makeshift pouch and waking at 2am for one of five daily bottle feeds, as she helps with the female joey’s weaning process.

The joey, who Bec has named ‘Meeuk Mia’ or ‘Mia’ for short, will grow up to have an important role at Taronga’s Education Centre, meeting and helping children learn about the importance of looking after native wildlife.

Bec said the joey, whose name means “halo of the moon” in the language of the Noongar people from Western Australia, is already growing in confidence.

“She’s quite the little climber. She loves climbing on the other keepers’ shoulders and heads during morning tea and I even woke up one night to find her looking at me from atop a mountain of pillows next to my bed,” said Bec.

For now the joey’s diet consists of a special milk mixture and the occasional nibble of native grass and flowers, but she’ll be introduced to solid foods such as carrot in the next few weeks.

“The 2am bottle feeds are certainly the toughest, as Mia gets tired and falls asleep while she’s drinking,” said Bec.

Mia is the youngest of three Quokka joeys born at Taronga this year. The Zoo is part of a national breeding program, helping to establish an insurance population to safeguard the species into the future.

One of the smallest wallaby species in Australia, Quokkas are found in high numbers on RottnestIsland and in small populations in the south-west of Western Australia. With their geographical range being limited to this small area, the species has been classified as vulnerable.

“If a natural disaster or disease were to hit RottnestIsland it would be devasting for Quokkas, which is why an insurance population is so important,” said Bec.

Mia will continue to be nursed by Bec until the joey is old enough to join Taronga’s trio of hand-raised Quokkas, ‘Poppy Lou’, ‘Autumn’ and ‘Jarrah’, at the Education Centre.

More amazing pics, below the fold!