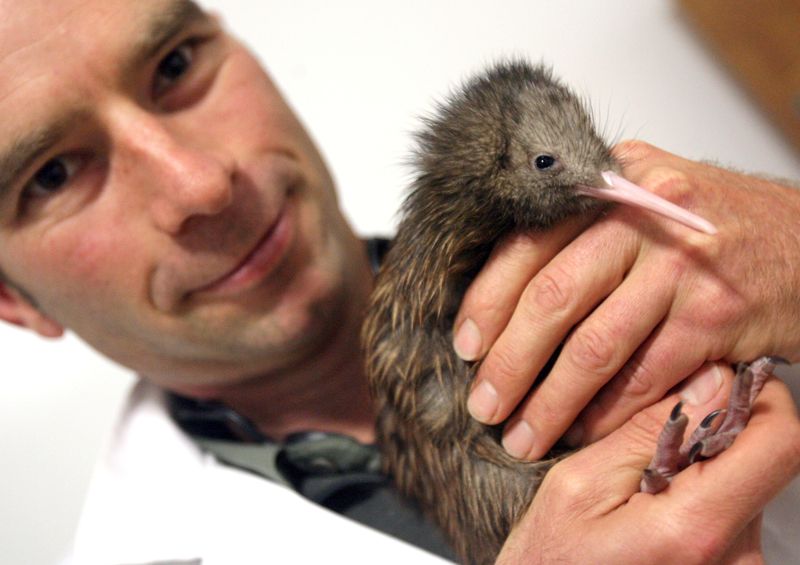 It's no easy task to hatch out of an egg —just ask the season's first North Island Brown Kiwi chick to be hatched at Pukaha Mount Bruce National Wildlife Center in New Zealand. The chick, now 11 days old, is pictured at six days old, being fed its first meal of beef heart strips by captive breeding ranger Darren Page. It will soon start to feed by itself. At that stage it will be put into a safe pre-release enclosure and monitored closely for the next six to eight months. Once it reaches a goal weight of 2.6 pounds (1200 g), it will be released into the Pukaha Mount Bruce reserve.  Kiwis who reach this size are more able to survive the threat of predators such as rats, stoats and ferrets and will grow and flourish in the wild.

The second kiwi chick of the season was found hatched in its burrow and brought in to the center to be raised in safety, as many wild chicks do not survive when stoats are on the prowl. Three more eggs are currently in the incubators in the Kiwi house and more will be coming in throughout the next few weeks. Staff at Pukaha Mount Bruce expect to raise over 20 Kiwi chicks in their nursery for release during this breeding season. 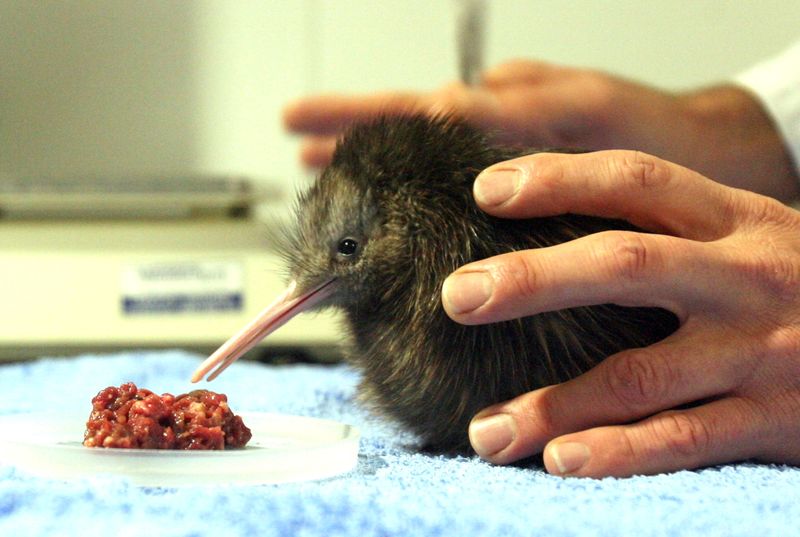 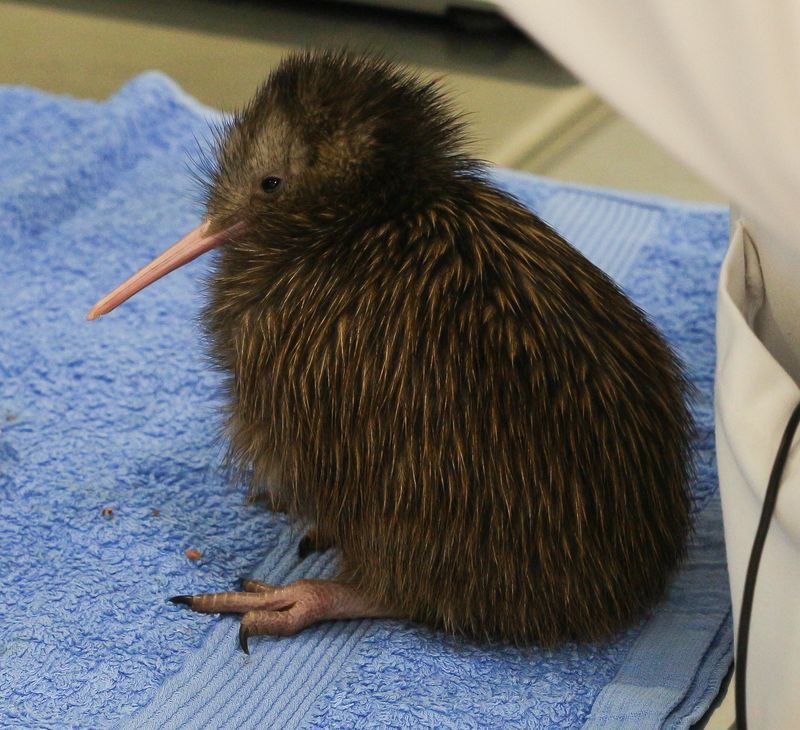 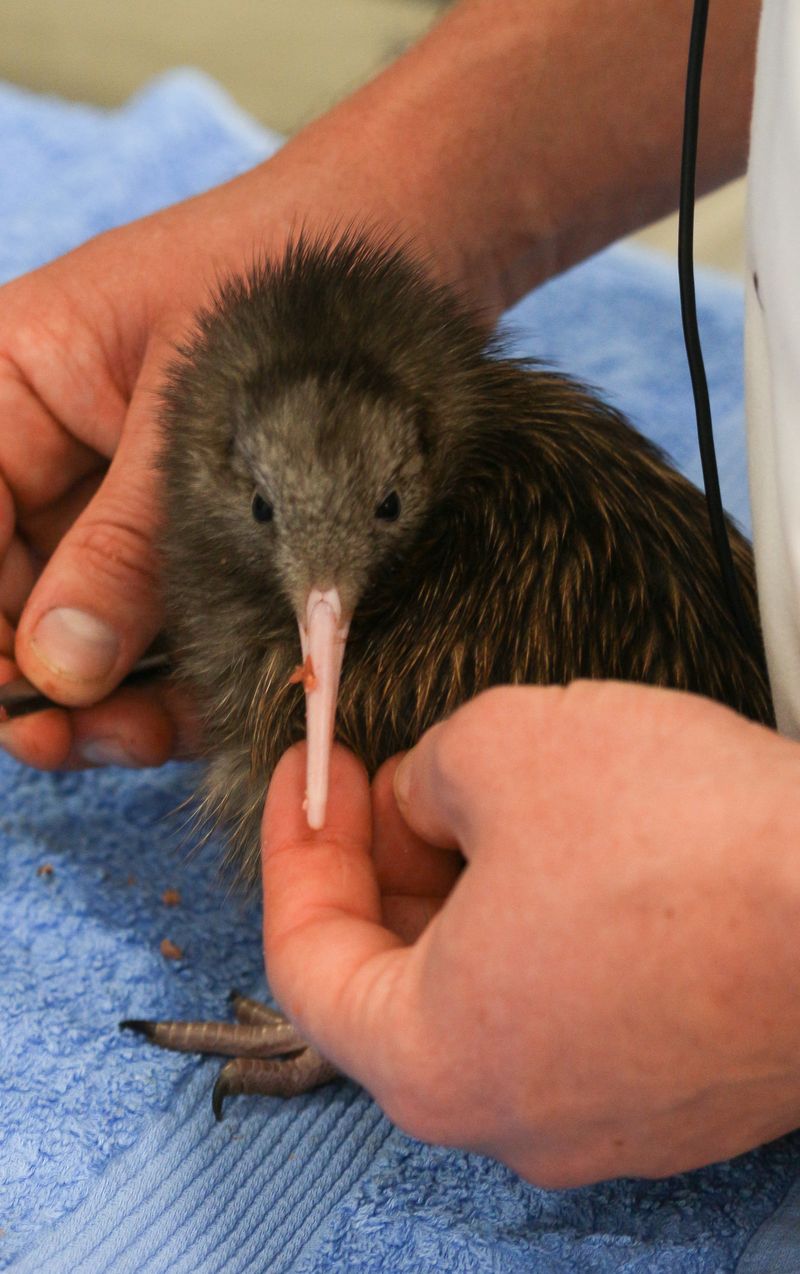 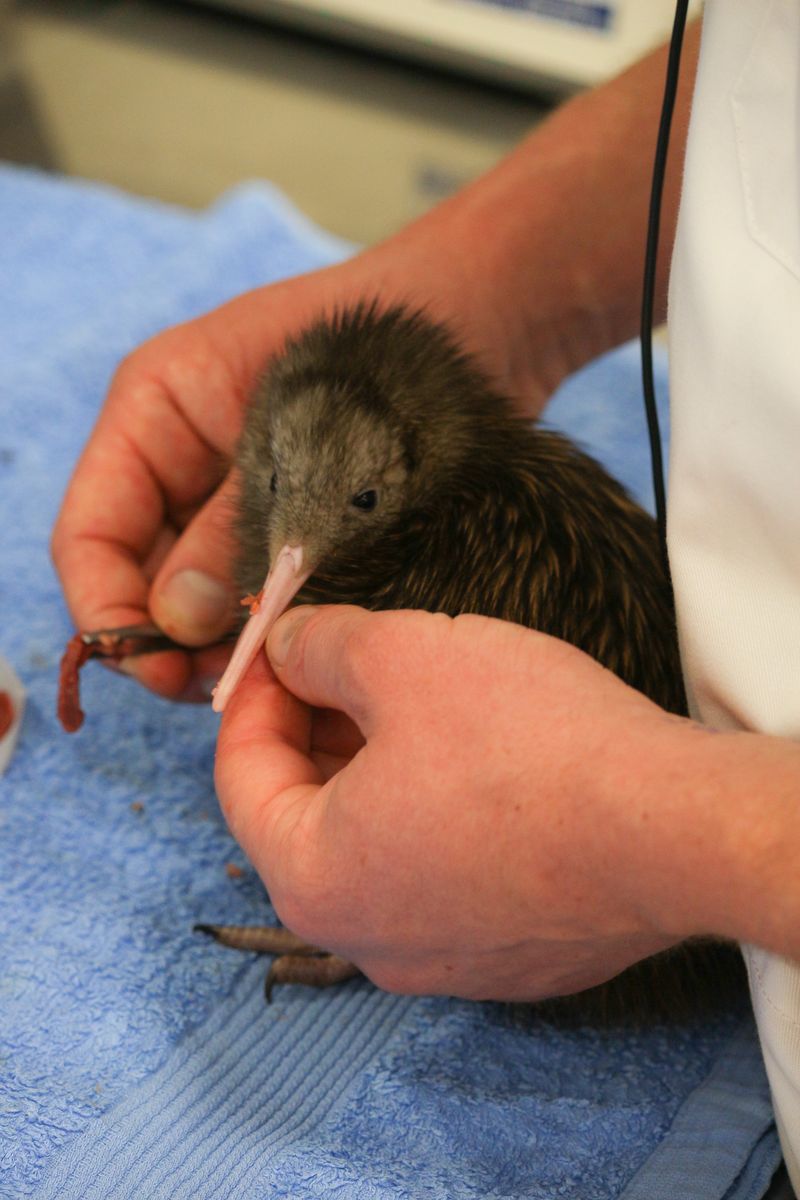 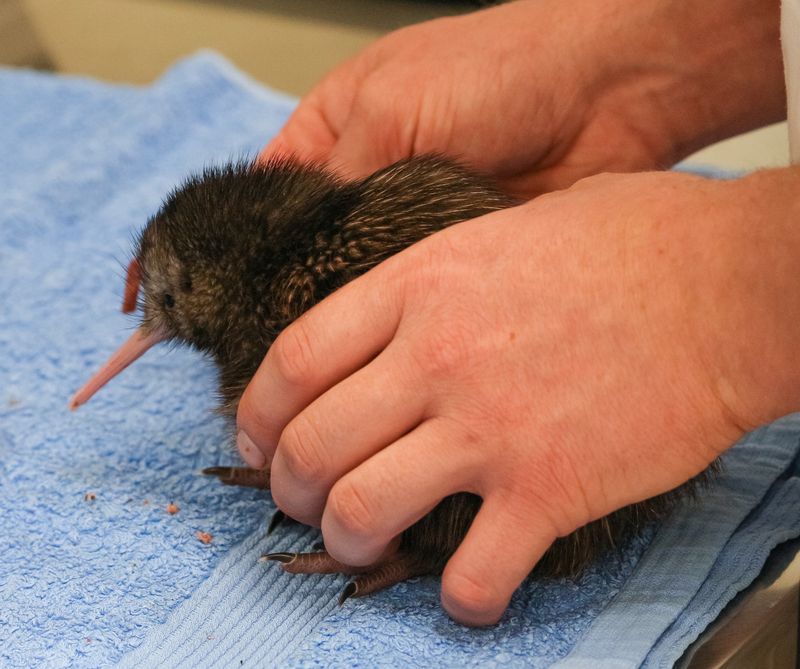 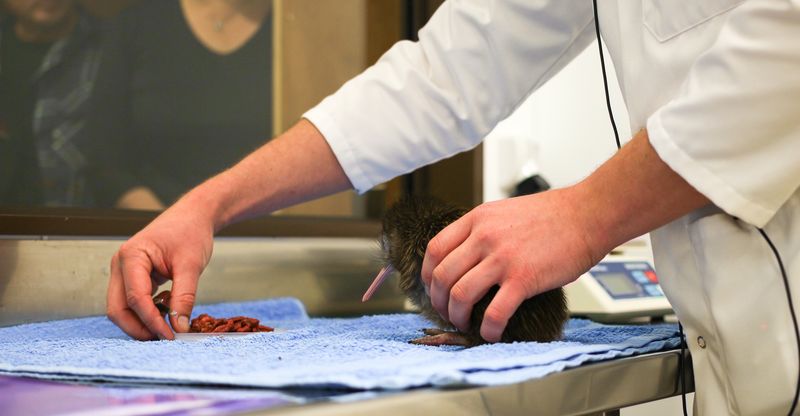 About the size of domestic chickens, Kiwis are flightless birds related to ostriches and emus. These shy, nocturnal birds are found only in New Zealand. All five species of Kiwi are decreasing in number, threatened by loss of habitat and by mammalian predators introduced by humans. Kiwis are fiercely territorial and the only birds in the world known to have nostrils at the end of their bills. This allows them to sniff for food including worms, grubs, insects and berries, during the night when they are active. North Island Brown Kiwis are listed as Endangered on the International Union for Conservation of Nature's Red List of Threatened Species, with the wild population estimated at 35,000. 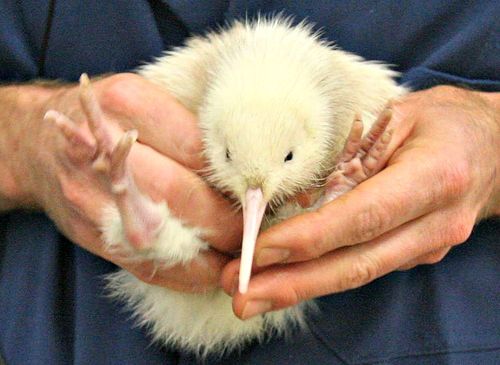 North Island Brown Kiwis with white plumage are extremely rare.  This chick is the third white Kiwi ever born in captivity, according to center officials. The center is the same nursery where Manukura, the first white Kiwi and Mauriora, a second white Kiwi, was hatched in December last year.

The staff knew that the eggs, which were collected from the wild, had come from Manukura’s brown-feathered father, so they knew there was a 25% possibility of another white Kiwi, but it still came as a surprise. 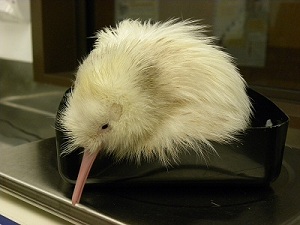 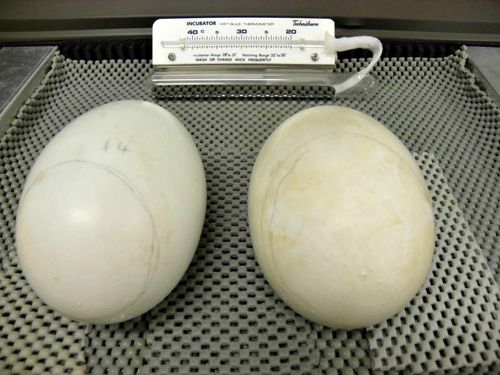 A small number of North Island Brown Kiwi carry the recessive white gene which both the male and female must have to produce a white chick.

All three white chicks have the same father, who has been identified through his transmitter. Though the identity of the mother can’t be told for certain, center staff assumes she is the same because of the rarity of the white gene. There is a one-in-four chance of such a pair producing a white chick.

Local Maori iwi Rangitane o Wairarapa are delighted that Pukaha Mount Bruce has been blessed a third time. “We have always known the reserve at Pukaha Mount Bruce is a very special and spiritual place, this third white Kiwi is confirmation of what we have always known,” Rangitane chief executive and Pukaha board member Jason Kerehi said. The iwi will name this special chick over the next few days.

This white Kiwi is the seventh Kiwi chick to have hatched at the centre so far this season, and many more are expected. Another egg currently incubating in the nursery is from the same nest as this white Kiwi chick, so there is a 25% chance of a fourth white chick.

Within the Pukaha Mount Bruce reserve, Kiwis live as they would in the wild, but all males are tracked with transmitters because they incubate the eggs.   Any eggs laid are taken to the center for incubation.  Chicks are hand-reared and returned to the forest when they are about eight months old.

There are five species of Kiwi, all native to New Zealand, and all populations are declining.  To protect the wild birds, a number of conservation programs, like this one at Pukaha Mt Bruce, have been established.  These shy, nocturnal, flightless birds are the national symbol of New Zealand.

A Snowy White Kiwi Hatches Just in Time for the Holidays 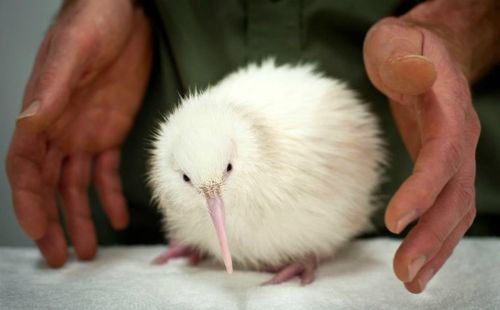 A second, rare, white Kiwi hatched on the morning of December 18 at Pukaha Mount Bruce National Willdlife Center. Like it's sibling, Manukura, this little one has received a special and meaningful name -- Mauriora, meaning ‘sustained life’. It hatched in the Wildlife Center's nursery, where Manukura – the world's first white kiwi hatched in captivity – came along in May.

Called a powerful name by Rangitane chief executive and Pukaha board member Jason Kerehi, he added, "This new kiwi is seen as an assurance that we are blessed with more than one special creature and there is potential for more."

Conservation Department captive breeding ranger Darren Page said it was pretty unusual that two kiwis with the rare gene to produce white chicks had managed to find eachother and mate within the 940-hectare Pukaha forest - not even once, but twice over two seasons! "Both white birds have the same father, who we have identified through his transmitter," he added. "We can't identify the mother but assume she is the same because of the rarity of the white gene."

Eleven kiwi have hatched at the center so far this season and of the two kiwi eggs incubating in the nursery, one is from the same nest as Mauriora. Keepers are waiting to see what that brings. 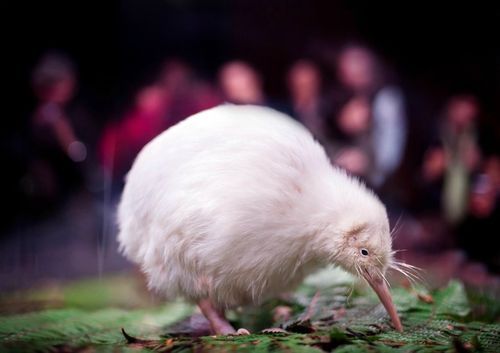 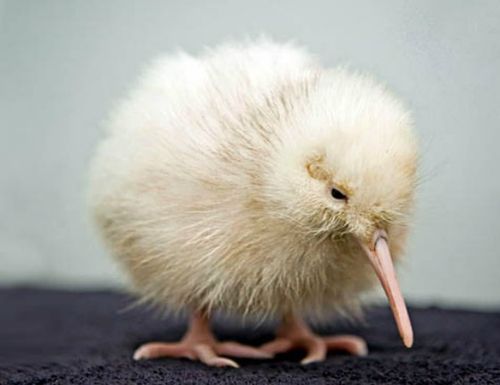