A blue-crowned pigeon chick hatched in the Wings of Asia aviary at Santa Barbara Zoo on November 7, 2021.

The chick’s sire (father) transferred to the Zoo in late May of this year and was introduced to Helga (dam/mother), and the two hit it off immediately! They have been nesting nearly all summer in preparation for their precious cargo.

The chick was born with no feathers, but at 15 days old, it already has a mini crest like its parents!

Parents take turns sitting on the nest and feed the chick by regurgitating (bringing up swallowed food).

The whole family is visible in Wings of Asia, so be sure to stop by to take a peek at the pigeons on your next visit to the Zoo.

We don’t know if a chick is a boy or girl until its first exam, which is around 45-60 days of age. Latest breaking news: we found out the chick is a boy! 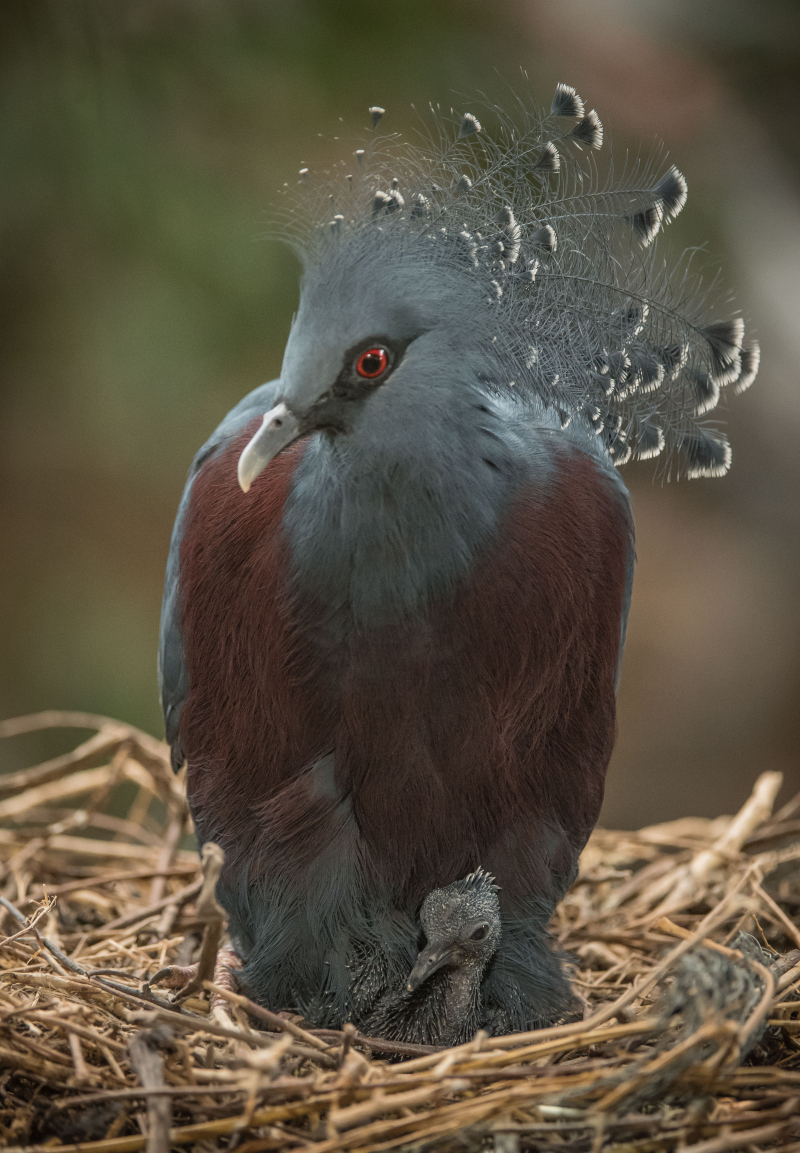 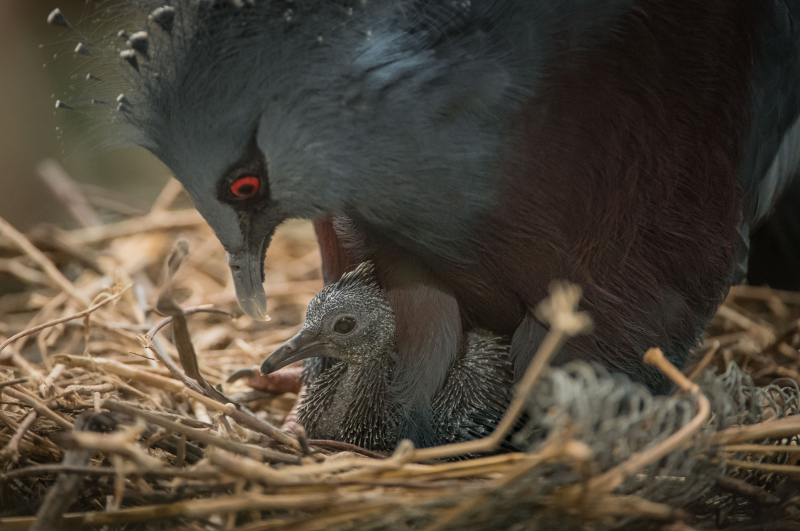 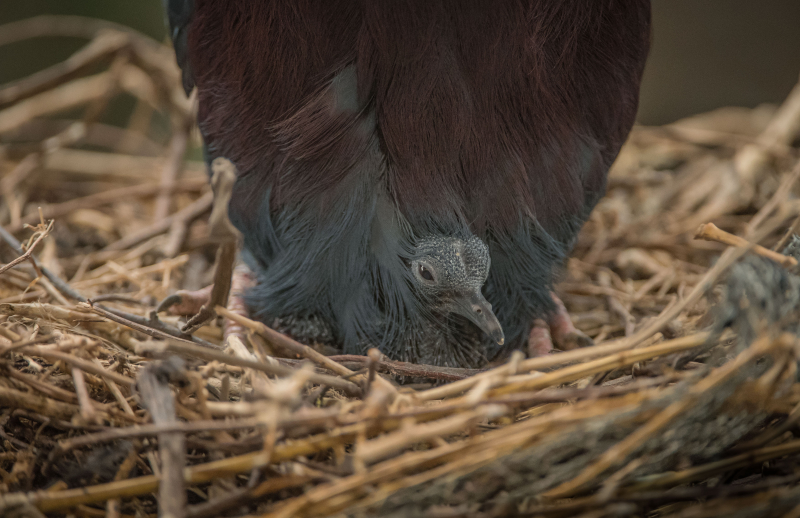 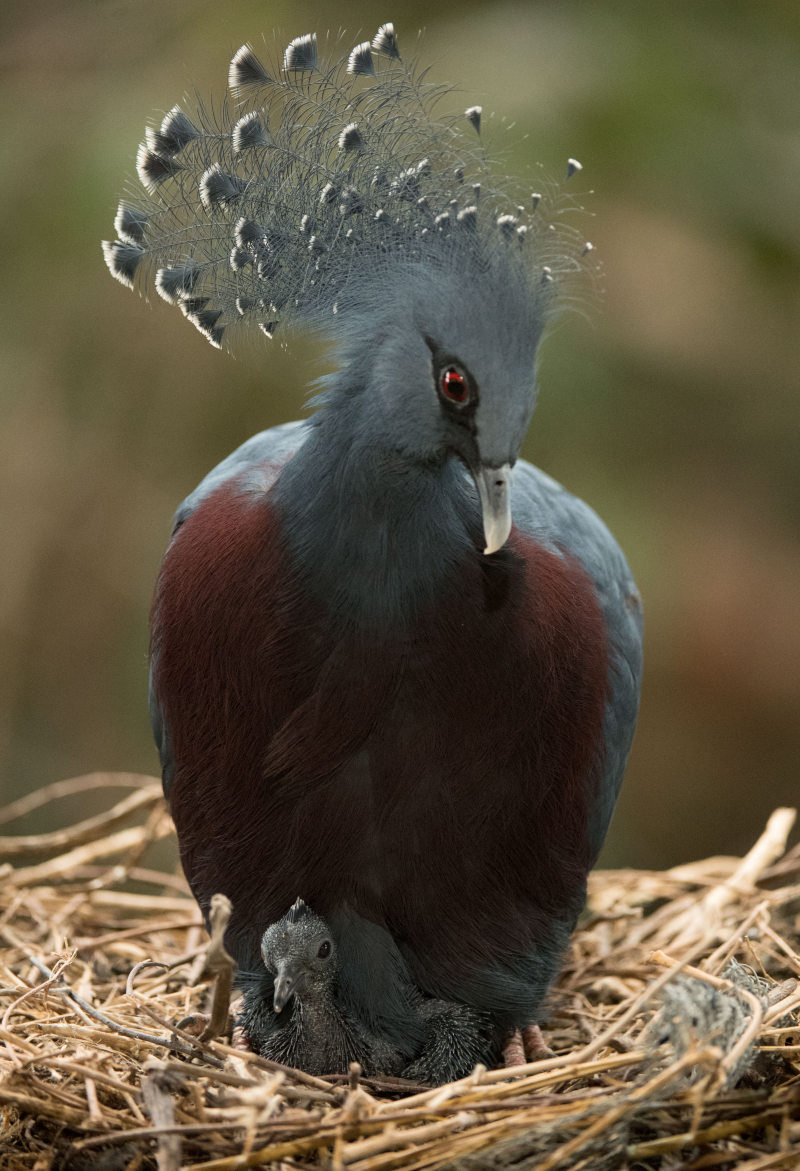 According to the Zoo, the newly fledged little bird is now bright blue, rocks the best mowhawk, and can be seen strutting its stuff! When fully grown, the chick will be similar in size to a turkey.

Native to Indonesia and New Guinea, the Victoria Crowned Pigeon (Goura victoria) is supposedly named after Queen Victoria who had a penchant for wearing elaborate, feathered headwear.

One of the closest living relatives of the now extinct Dodo, the Victoria Crowned Pigeon is itself declining in the wild, largely due to habitat loss as its forest home is cleared to make way for unsustainable palm oil plantations. It is also a bird that is prized by hunters and popular in the illegal pet trade, due to its beautiful appearance and spectacular plumage. As a result, it is a species listed as “Vulnerable” to extinction by the International Union for the Conservation of Nature (IUCN).

Mark Vercoe, Assistant Curator of Birds, said, “Along with the Nicobar Pigeon and the Tooth-billed Pigeon, the Victoria Crowned Pigeon is a descendant of the Dodo – a bird that has been famously lost from the planet because of the actions of humans.”

“This is something we don’t want to see a repeat of and it’s a lesson we really should learn from. Sadly, however, many bird species, including the likes of the Victoria Crowned Pigeon, are in trouble for many of the same reasons – human activity. Hopefully this chick can help us to highlight how important it is that we act for wildlife now; we cannot possibly let these beautiful birds go the same way as their extinct cousins.”