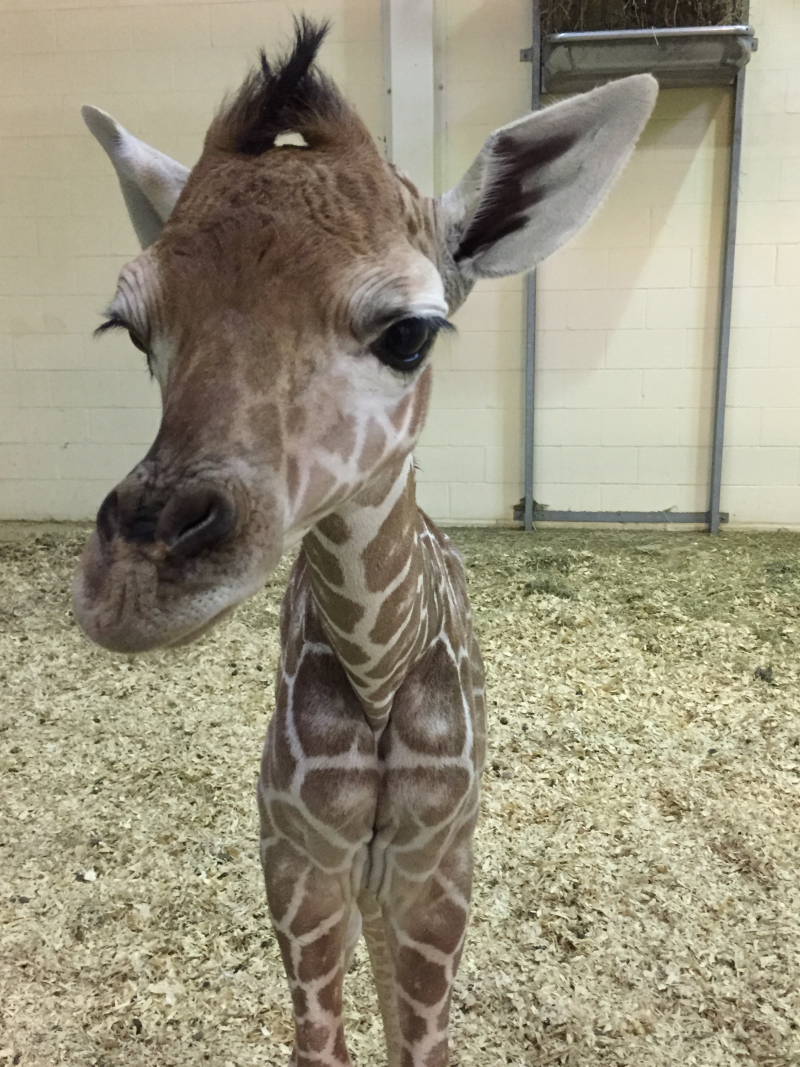 The Zoo endeavored to carefully document this latest Giraffe birth. Their goal was to not only celebrate the incredible birth, but to continue to improve husbandry techniques and share their birthing experience with other zoos around the world.

A camera was installed in Vivian's maternity holding stall to monitor and record the birth. Staff had been monitoring the camera, 24/7, for months in preparation of the birth. When the big moment finally came, the entire process was captured on video. 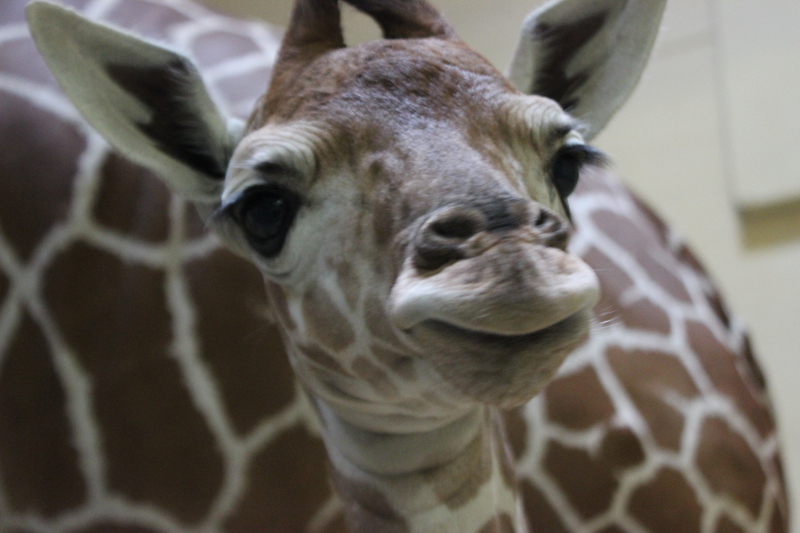 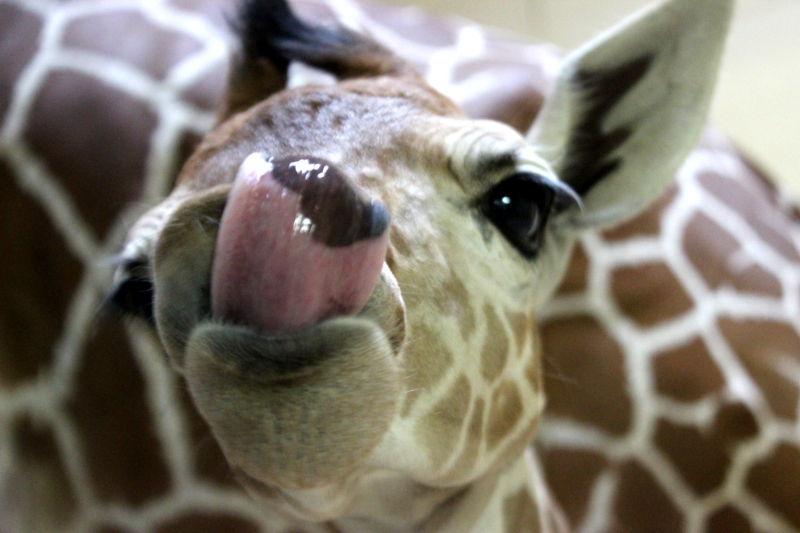 Because Giraffes are threatened in their native habitat, every birth is important. The process gives zoologists, conservationists, and researchers the opportunity to study the species and their offspring, as well as educate and inspire zoo visitors. Peoria Zoo is proud to announce the birth of a Reticulated Giraffe. The male calf was born July 25 to mother, Vivian, and father, Taji.

A neonatal exam was done shortly after the birth, and the calf weighed in at 102.5 lbs. and measured 5’4” tall. 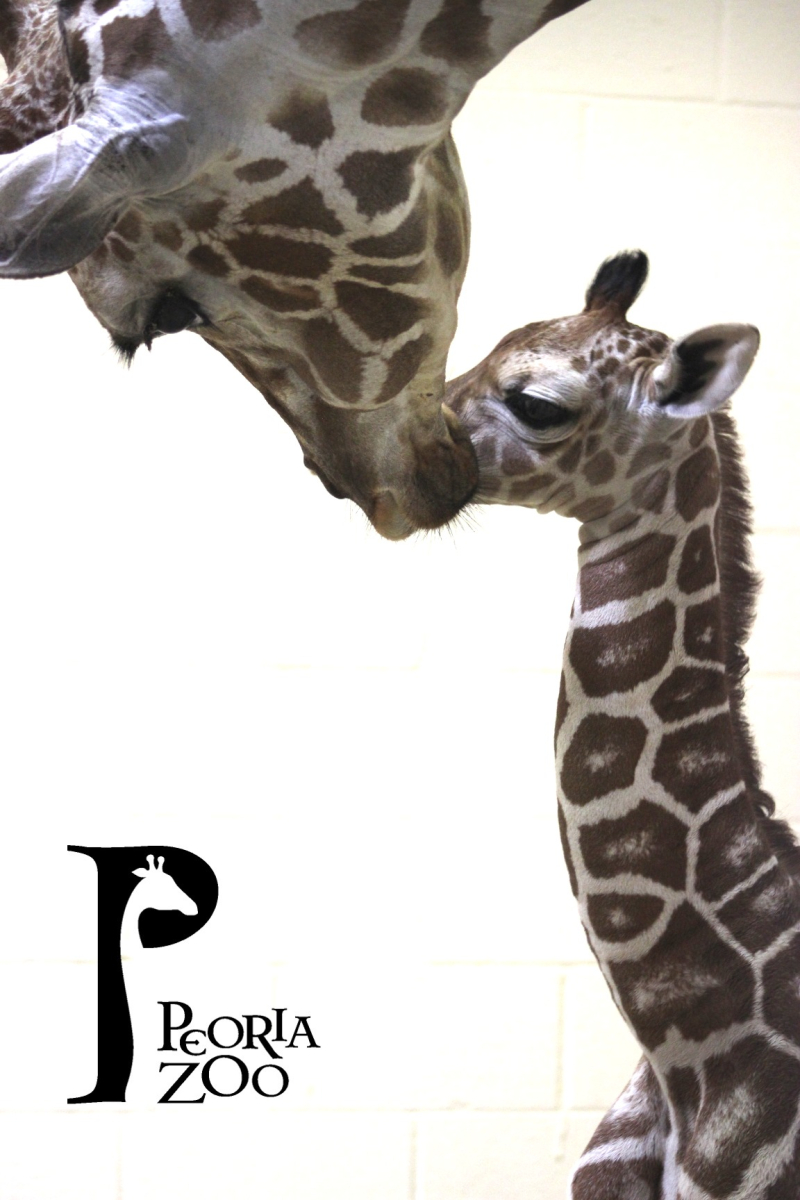 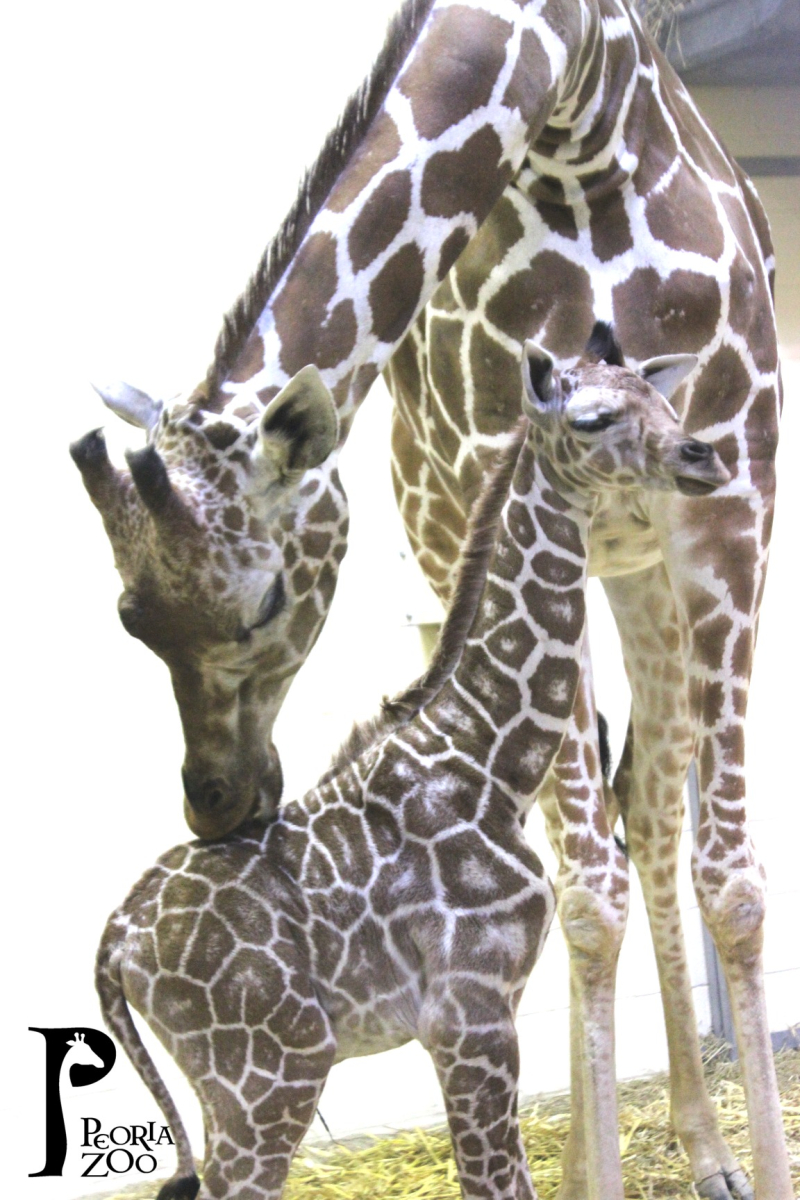 In preparation for the birth, Zoo staff modified an off-exhibit stall to offer a secure, quiet, and soft place for the expectant mother and calf. A video camera was installed in the stall so staff could monitor the mother and calf 24/7.

On the day of the calf’s birth, Kim Scott, Curator of Animals, checked the remote camera at 2am. She recalled, “Everything was so calm I just knew it would be the same the next time. I have never woken up as fast as I did at 4am when Vivian turned and I saw 2 hooves sticking out.”

Although three staff members reported to the Zoo within 20 minutes, the calf was born before any arrived. Roz Wolfram, Primary Giraffe Keeper, said, “I can’t believe what an awesome mom Vivian is being.” 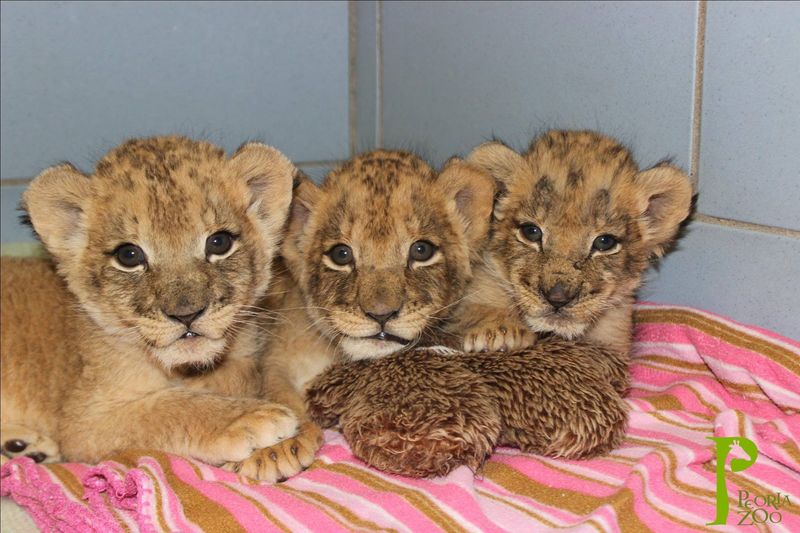 Lizzie and Arthur have been together since 2008, and on Dec 4, 2015 they became parents for the first time. Nine-year-old Lizzy gave birth to three sweet female Lion cubs at the Peoria Zoo. 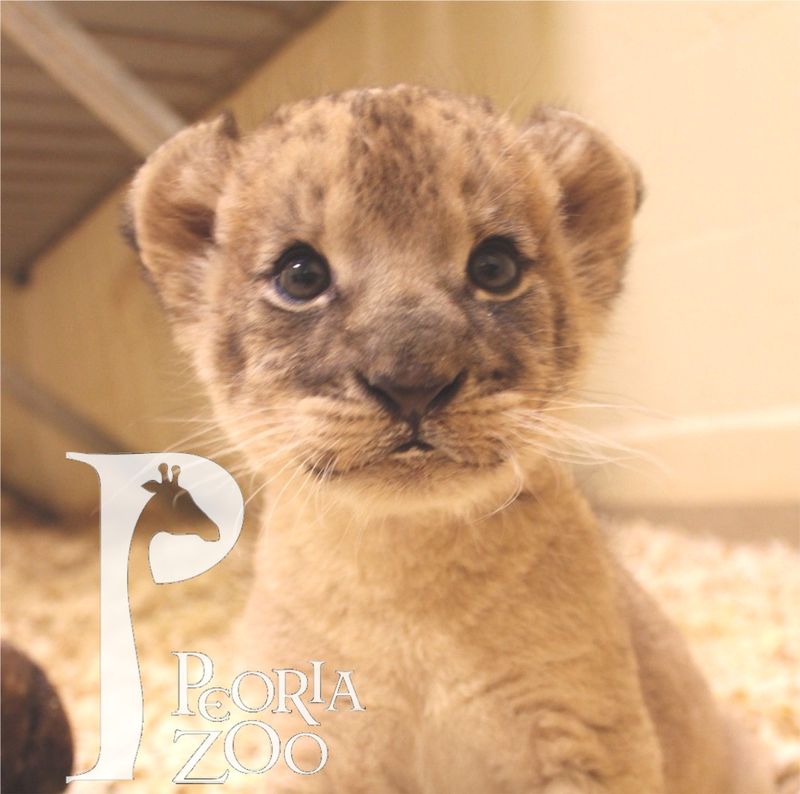 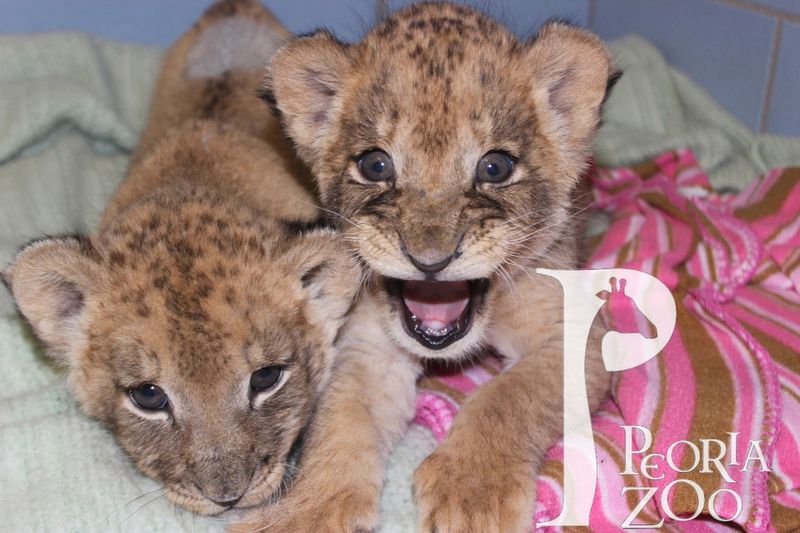 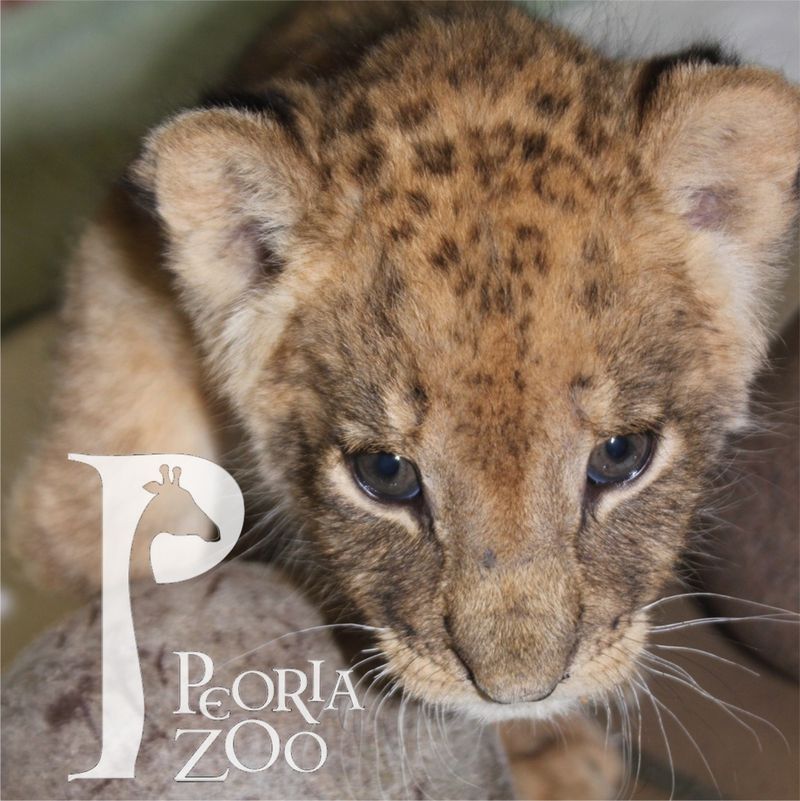 In preparation of the birth, Zoo staff modified an off-exhibit stall to provide a secure and quiet place for the expectant mother and cubs. A video camera was installed in the stall to allowed Zoo staff to view the family remotely, 24/7.

A whelping box was also installed, in the hopes that Lizzy would actually give birth in the box. The idea was to provide a safe place so the cubs could stay in the box until they were strong enough to climb out. However, Lizzy did not give birth in whelping box and it was later removed.

After the birth of the cubs, the new family was left totally alone, with no interruption for as long as possible to allow the new mom to bond with her offspring.

Zoo staff observed, via remote viewing, that the smaller of the females was not nursing or receiving attention from mom. Staff opted to remove the tiny cub from the mix and began to bottle feed her. Keepers initially struggled with this decision; bottle-fed Lions typically lack the maternally taught socialization skills that are vital.

After a week of staff feedings, the cub was placed back in the litter with mom. But, unfortunately, things took another turn for the worse in the saga when Lizzie was no longer able to produce enough milk for all the cubs. The three sisters are now receiving total care from Zoo staff.

For the duration of the winter months, the new cubs are NOT available for viewing. Peoria Zoo will continue to update their web and social media pages with news of the Lion cub’s progress.

It is anticipated they will be on exhibit and available for viewing in the spring. 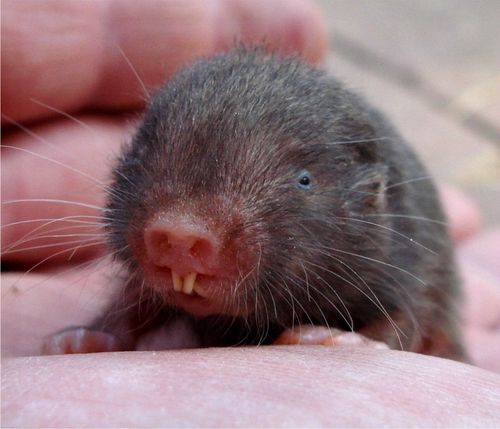 A Giant Zambian Mole-rat pup born on June 22 is the first surviving second generation of this species at the Peoria Zoo.

The most notable feature of Mole-rats is a pair of large incisors that lie outside the mouth.  Giant Mole-rats excavate their burrows by biting at the soil with their incisors, pushing it under their bodies with their forefeet and kicking it backward with their hind feet. 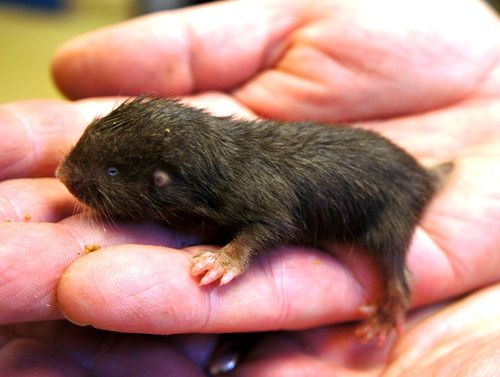 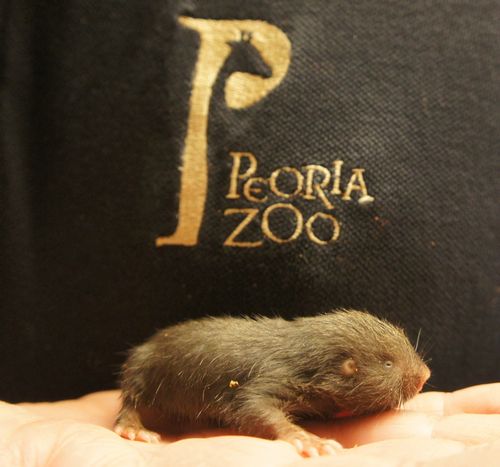 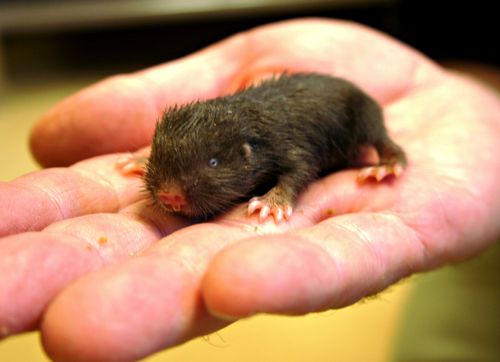 Peoria Zoo was the first recorded institution in the United States to exhibit this species.  Peoria Zoo and its partners imported Giant Zambian Mole-rats from South Africa for exhibition and research in the United States in 2006.   Since their arrival zoo staff has been working to find a management technique to ensure breeding success.

Ashley, the pup’s mother, born in 2008, was the first offspring ever to survive at the Peoria Zoo.

At six weeks of age the Mole-rat pup weighs less than one ounce (24g), but will grow to weigh more than 1.3 pounds (600g).  Pups have dark brown fur, while adults are buff -colored.

See more about Mole-rats below the fold.

Amur Tiger Cubs Play in the Sun at Peoria Zoo 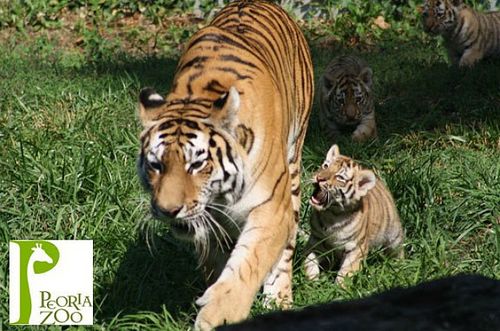 The Peoria Zoo welcomed their first Amur Tiger cubs in more than 30 years! The mother, Kyra, had the babies at the end of June. The cubs' father, Vaska, was brought in from the Minnesota Zoo last December to breed with Kyra. Neither of the parents had reproduced before but Kyra has proven to be an excellent first-time mother.

Once Kyra’s weight gain indicated that birth was imminent, a camera was repositioned to film the birthing platform. You can watch a video of the birth as captured here. Their first wellness check showed that all four cubs were healthy and that they ranged in size from 3.5 - 5.5 pounds (1.6 - 2.5 kgs). Vaska did not have access to mom or the babies, but was out in the habitat as Kyra and cubs spent their time bonding in the house. 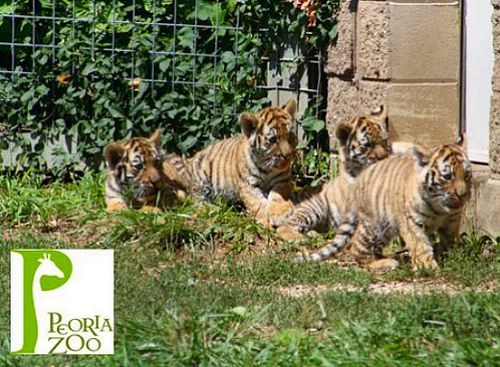 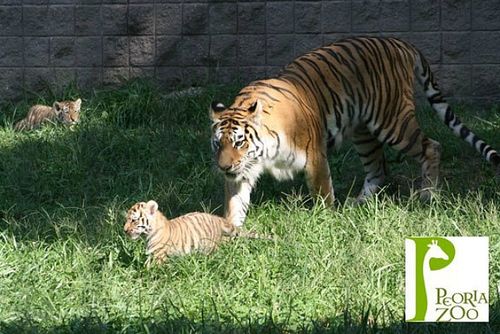 You can vote to name the cubs now through September 22 by visiting the Peoria Zoo's voting link. You can pick for two male and two female names from choices provided by the Zoo. The winning names will be announced at 11:00 a.m. on September 29! You can revisit their website or Facebook page to find out if the names you picked won.

More photos of the cubs at play after the jump: