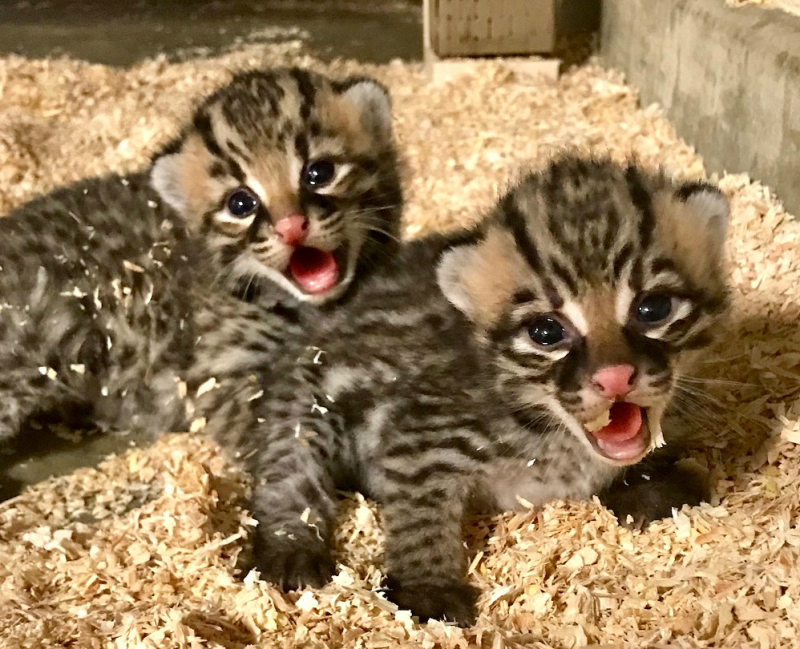 Spring means lots of new babies at the Los Angeles Zoo!  Guests can now observe two Sichuan Takin calves and two Chacoan Peccary piglets out in their habitats while an Eastern Bongo calf, two Ocelot kittens, and seven Peninsular Pronghorn fawns remain behind the scenes bonding with their mothers for a few more weeks. 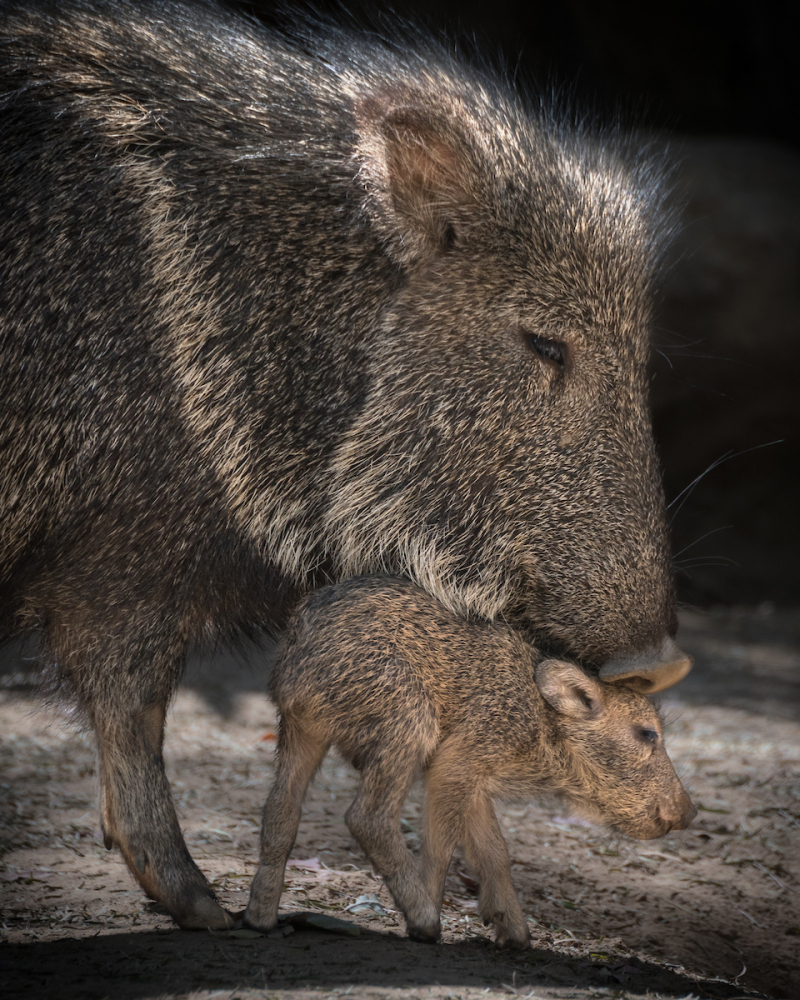 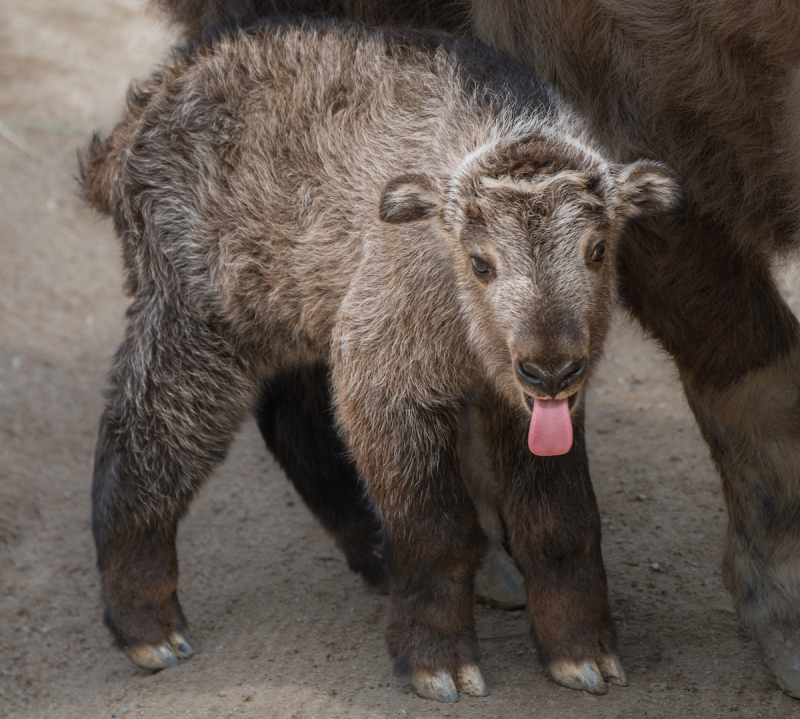 "The Zoo does tend to see a rise in animal babies each spring, but there is a lot more thought and careful planning that goes into the process than one might think," said Beth Schaefer, General Curator at the Los Angeles Zoo. "A majority of our offspring this season are all members of Association of Zoos & Aquariums (AZA) Species Survival Plan (SSP) programs which aim to keep the North American populations of these species sustainable while also creating an insurance population, so these animals don't disappear from the planet."

On April 4, the L.A. Zoo celebrated the birth of two endangered Chacoan Peccary piglets. These medium-sized animals are found primarily in Paraguay and Bolivia, and they have a strong resemblance to pigs. Chacoan peccaries are social animals that live in small herds of up to 10 individuals, and they are known for their tough snouts and rooting abilities. The L.A. Zoo is currently working with the only conservation project in existence for this endangered species called the Chaco Center for the Conservation and Research (CCCI) and hopes to help care for and breed this species whose numbers are dwindling primarily due to habitat loss and hunting.

More photos and video below. 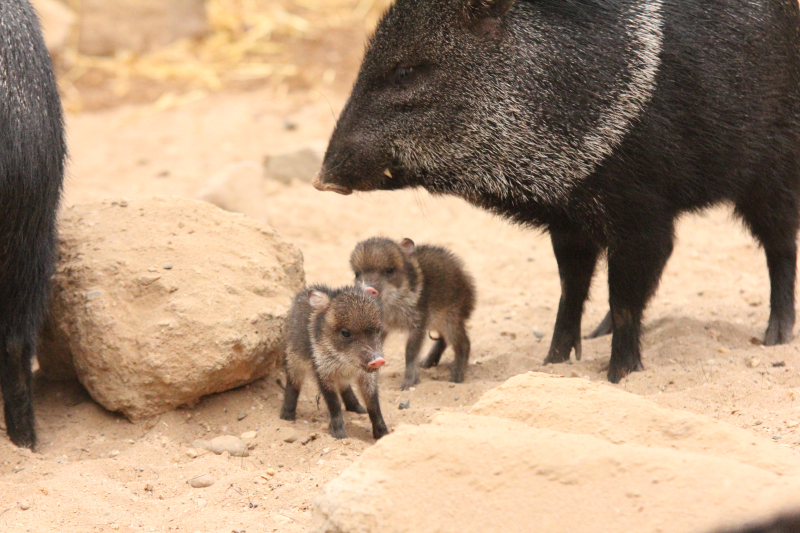 Burgers’ Zoo announced the birth of two Collared Peccaries on January 1st. The Zoo does not yet know the sex of the two, but the New Year babies weighed between 0.4 and 0.9 kilograms at birth. 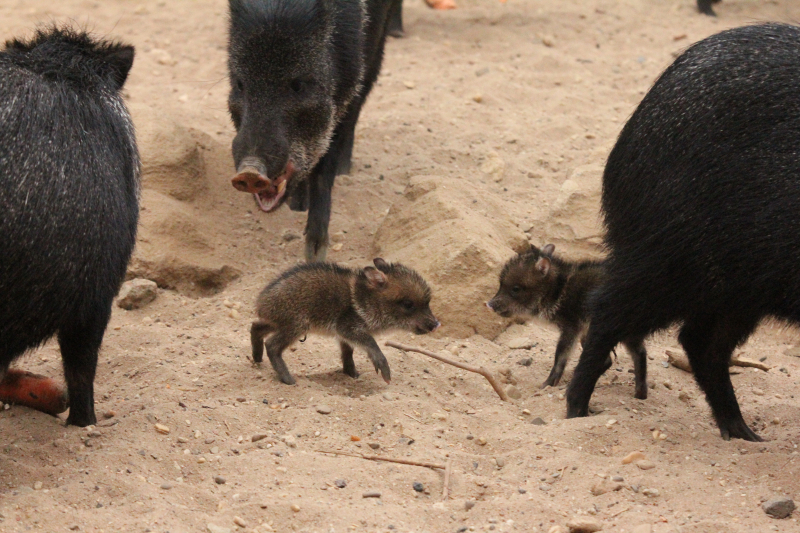 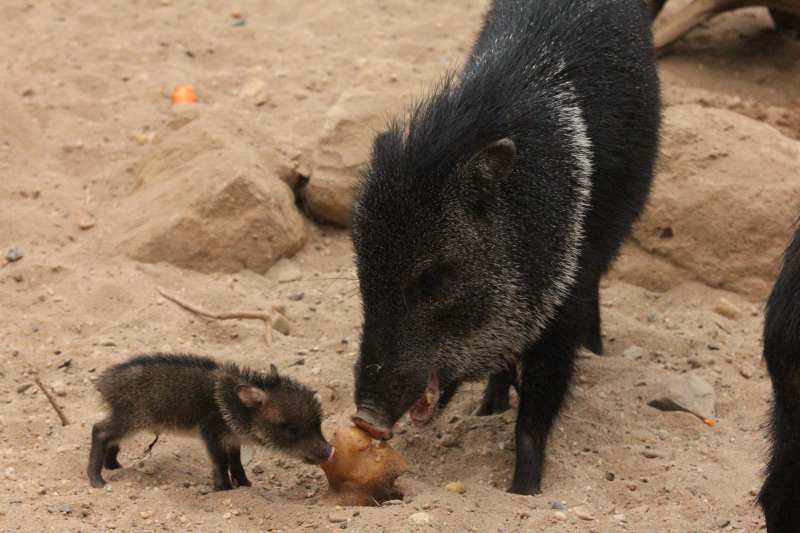 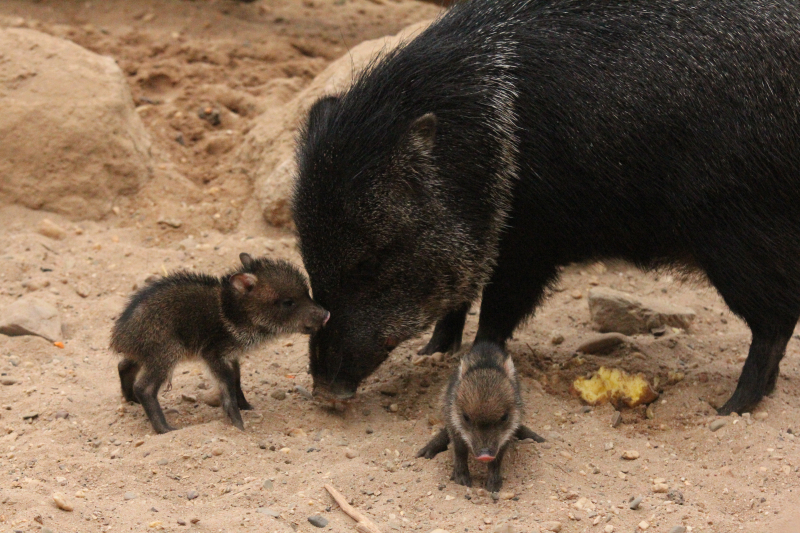 The Collared Peccary (Pecari tajacu) is a species of mammal in the family Tayassuidae found in North, Central, and South America. They are commonly referred to as javelina, saíno or báquiro, although these terms are also used to describe other species in the family. The species is also known as the musk hog. In Trinidad, it is colloquially known as quenk.

Although somewhat related to the pigs and frequently referred to as one, this species and the other peccaries are no longer classified in the pig family, Suidae.

The species has small tusks that point toward the ground when the animal is upright. It also has slender legs with a robust or stocky body. The tail is often hidden in the coarse fur of the peccary.

They are diurnal creatures that live in groups of up to 50 individuals, averaging between six and 9 members. They frequently sleep at night in burrows, often under the roots of trees, but sometimes they can be found in caves or under logs. However, the species is not completely diurnal. In central Arizona they are often active at night but less so during daytime.

Although they usually ignore humans, they will react if they feel threatened. They defend themselves with their long tusks, which can sharpen themselves whenever their mouths open or close.

A Collared Peccary will release a strong musk or give a sharp bark if it is alarmed. They also make clacking and barking sounds to warn their enemy, before finally charging to bite.

Collared Peccaries can live for up to 10-15 years in the wild. Females attain sexual maturity between 8-14 months while males are mature at 11 to 12 months.

After mating, the female undergoes a gestation period for up to 150 days. The pregnant females generally move away from the rest of the herd before giving birth, as the herd can be a threat to the newborns. On average, they give birth to a litter of one to five babies that are capable of following their mother soon after birth.

The day after giving birth, the female reunites with the herd. The babies stay close to mother and follow her until they are mature at the age of 11-12 months. During this period, only the older females of the herd are tolerated and allowed to groom the baby. Weaning occurs when the baby is approximately 2-3 months old. 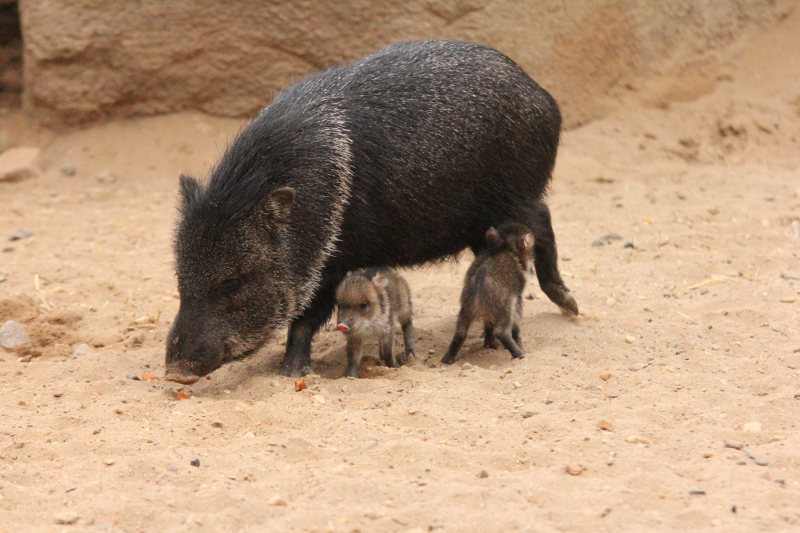 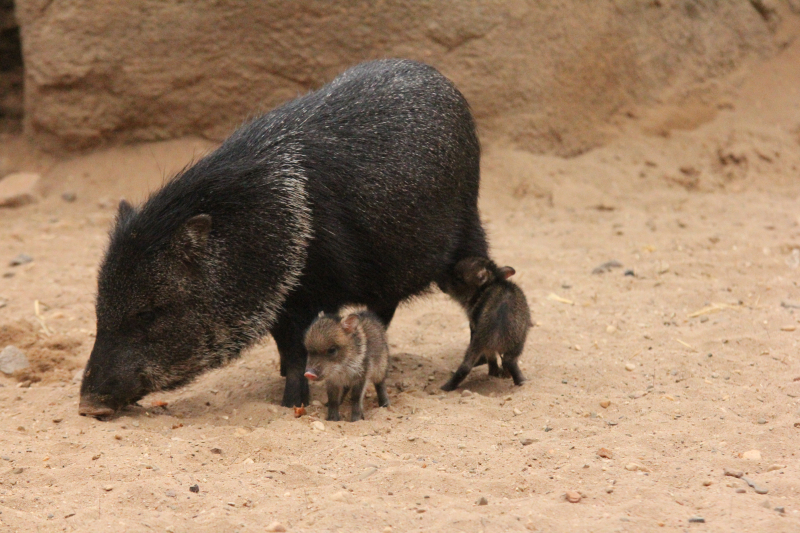 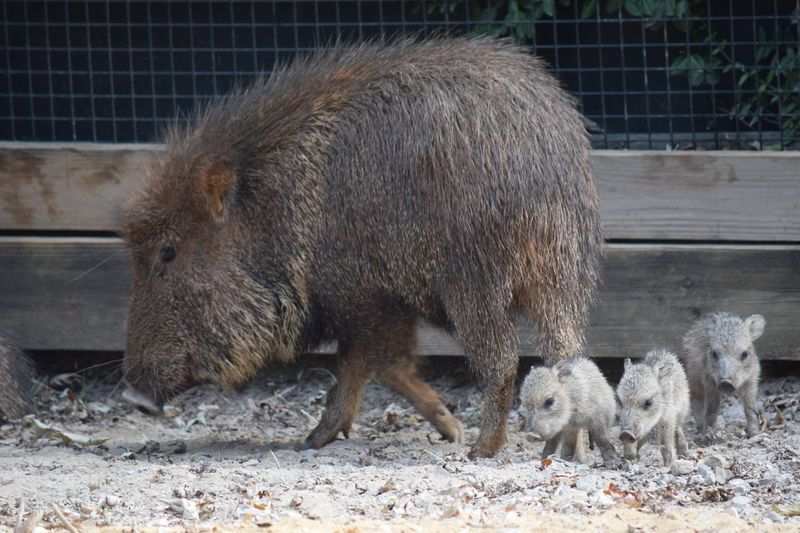 The three siblings were born on the morning of September 6th to seven-year-old mother Butternut and two-year-old father Squash. The newborns are reported to be healthy and thriving. Zoo staff said they are already displaying their unique behavior of “frisky-hopping”, which consists of running and leaping in circles in short bursts of activity. 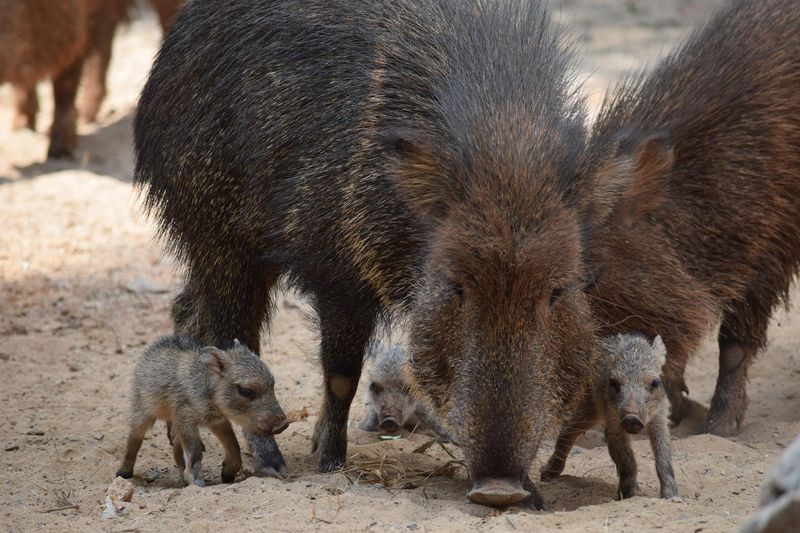 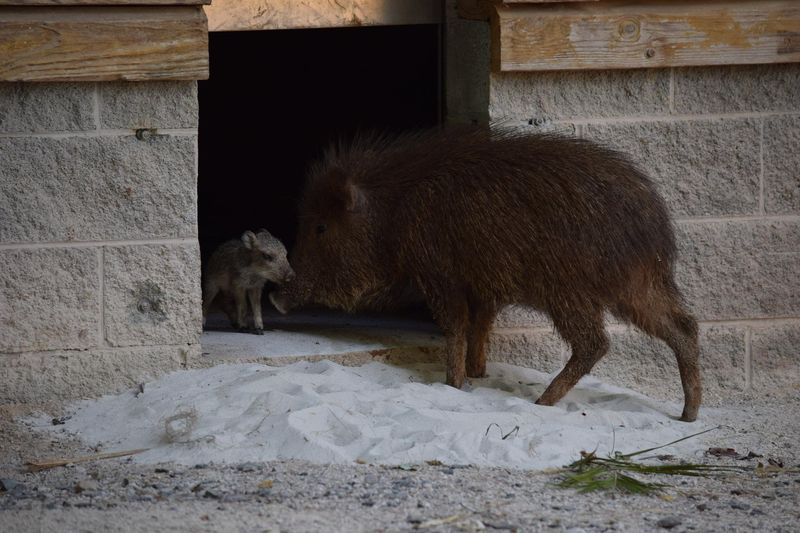 The Chacoan Peccary (Catagonus wagneri), or Tagua, is a species of peccary native to the Gran Chaco of Paraguay, Bolivia, and Argentina. Believed to be the closest living relative of the extinct genus Platygonus, the Chacoan Peccary was first described in 1930 based on fossils and was originally thought to be an extinct species. The animal was discovered to be alive, in 1971, in the Argentine province of Salta.

The Chacoan Peccary has many pig-like features. It is an ungulate with a well-formed rostrum with a leathery snout. The bristle-like hair is generally brown to almost gray. A dark stripe runs across the back, and white fur is on the shoulders. When nervous or frightened, it flees and raises the hairs on its back. While making an escape, it will spray secretions from its dorsal glands, which may be a signal for other peccaries to keep their group together.

Chacoan Peccaries often travel in herds of up to twenty, and they are active during the day. They are social mammals that communicate by various sounds, ranging from grunts to chatters of the teeth. Though individuals may occasionally exhibit aggressive behavior such as charging and biting, the species is not as aggressive as others. As a defensive strategy, members of a herd may line up in a defensive wall; unfortunately, this makes them an easy target for hunters. They also produce a milky, odorous substance that is secreted from glands on their backs and is dispersed onto trees or shrubs by rubbing.

Peccaries are omnivores, but the Chacoan Peccary prefers to feed on various species of cacti. They use their snout to roll the cacti on the ground, rubbing the spines off. Their two-chambered stomachs are well suited to digest tough foods, and their kidneys are specialized to break down acids from the cacti. They are also known to eat acacia pods and cactus flowers. They seek out salt licks (which provide calcium, magnesium, and chlorine) that are formed from ant mounds and construction projects.

Young peccaries are generally born between September and December, but litters have been found year-round. The average litter is 2 to 3 offspring. Females may leave the herd to give birth and then return afterwards. Newborns are precocial, able to run a few hours after birth.

The Chacoan Peccary is currently listed as “Endangered” on the IUCN Red List of Threatened Species. Numbers are decreasing as a result of habitat loss and fragmentation. 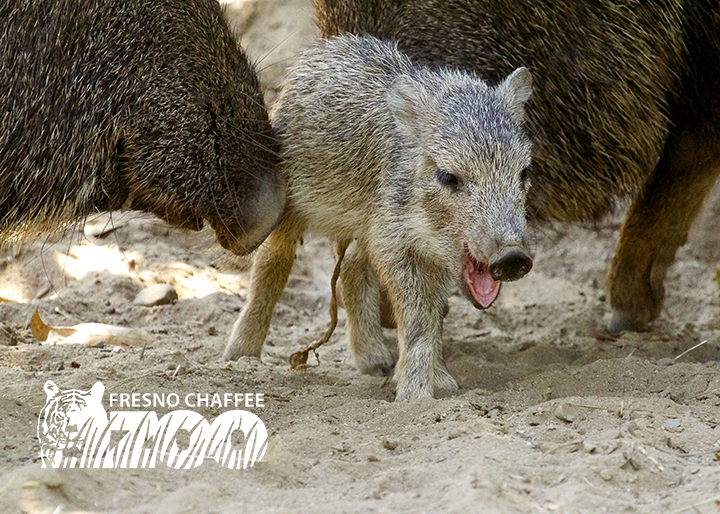 With only 3,000 Chacoan Peccaries remaining in the wild, each birth is important.  That’s why Fresno Chaffee Zoo is celebrating the arrival of a Chacoan Peccary on March 28. 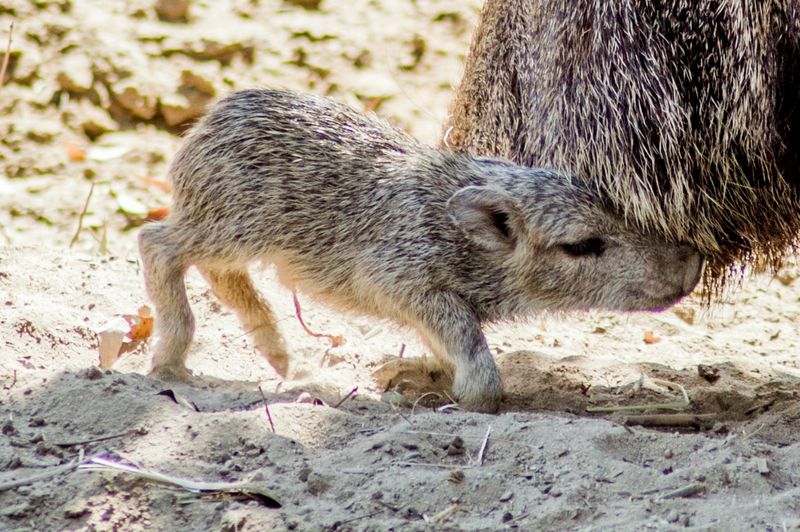 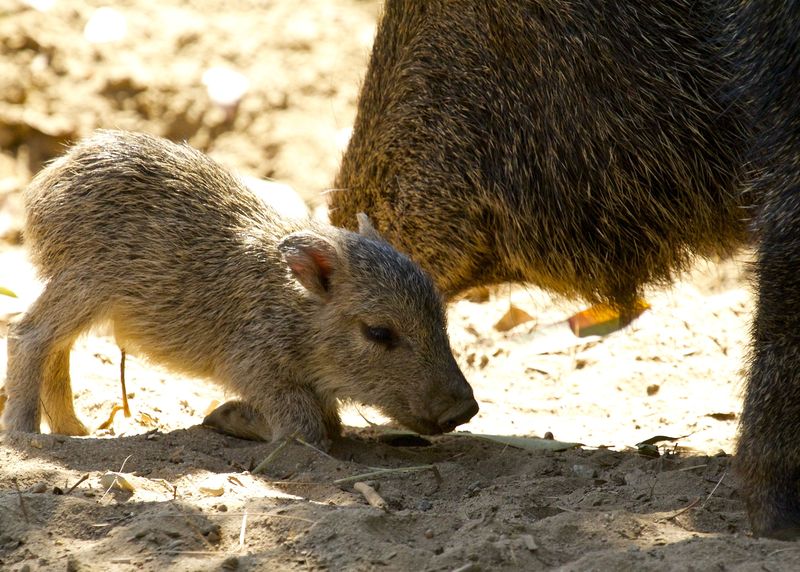 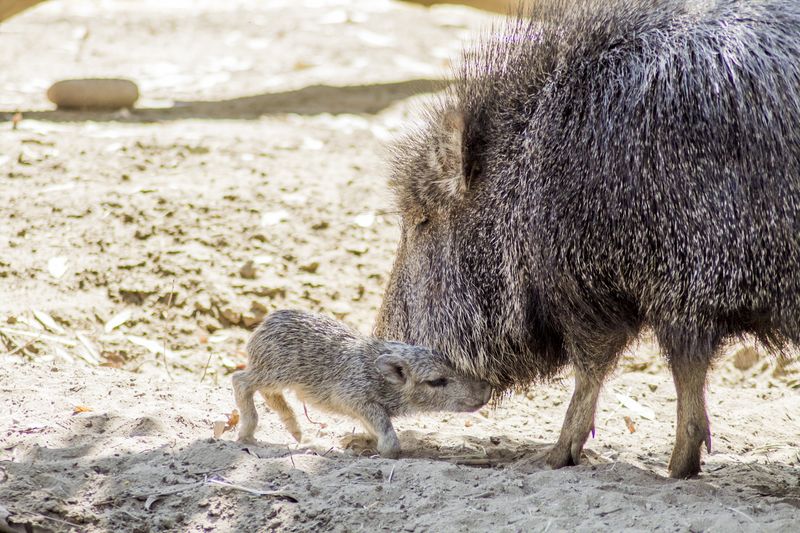 The baby’s gender and weight won’t be known until the staff performs a wellness check in a few weeks.

Also known as Taguas, Chacoan Peccaries are native only to the Gran Chaco of South America – an arid region covering parts of Paraguay, Bolivia, and Argentina.  At one time, Chacoan Peccaries were thought to be extinct, but a small population was discovered in 1971.

Chacoan Paccaries are well-adapted for life in the dry desert, where they feed on mainly on cacti.  To remove the spines from the plants, Peccaries use their snouts to rub pieces of cacti on the ground.  They may also pull spines from the cacti with their teeth.  Their digestive system is able to break down the tough, acidic cactus plants.

As roads are built, the Gran Chaco is no longer isolated and Peccary herds are decreasing.  As their habitat is fragmented, these unique creatures are becoming more and more rare.  Chacoan Peccaries are listed as Endangered by the International Union for Conservation of Nature. 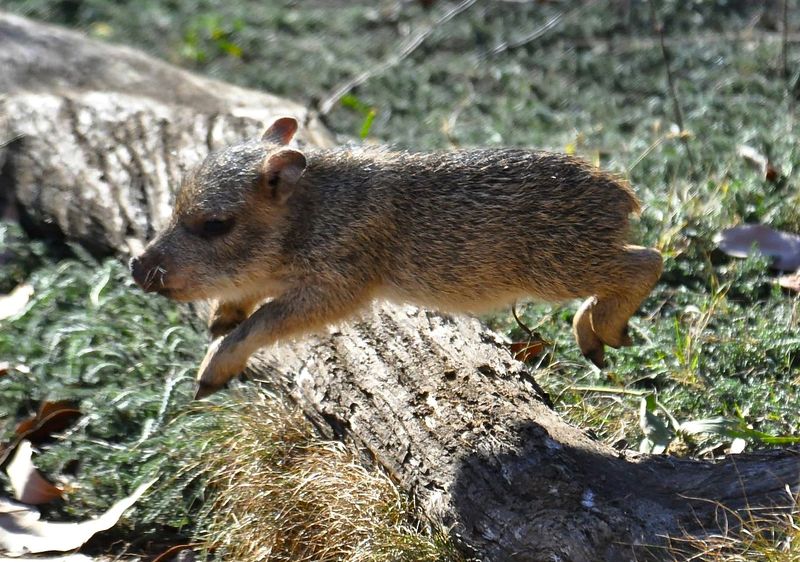 A litter of six Chacoan Peccary pups was born at San Francisco Zoo in early November. They are busy playing and exploring their outdoor habitat, in the company of the zoo's adult herd. The little ones love to leap and run in circles, an adorable behavior sometimes referred to as 'frisky hopping'.

Chacoan Peccaries are an endangered species of New World pig, found in the dry shrub habitats of Paraguay, Bolivia and Argentina. They are threatened by loss of habitat and illegal hunting. Social animals, they live together in territorial groups, often extended families. They eat plants, including cacti, which they roll along the ground with their snouts to remove the thorns. 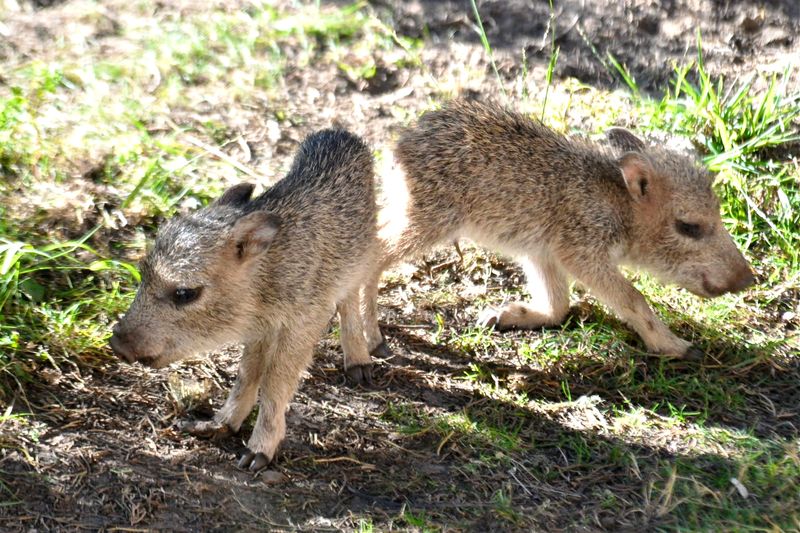 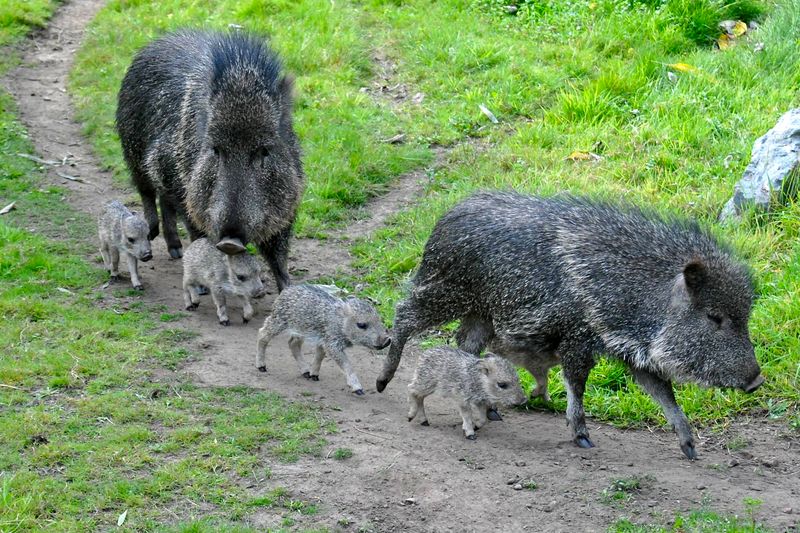 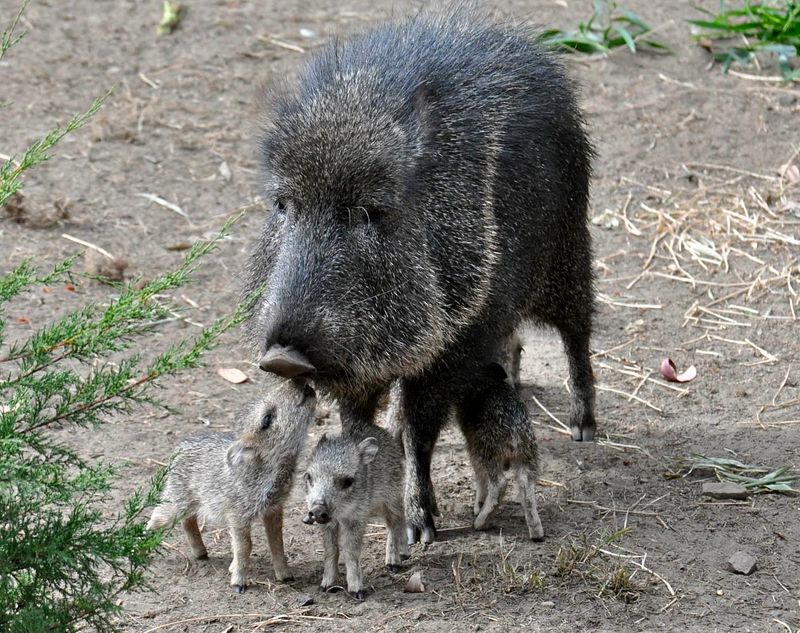 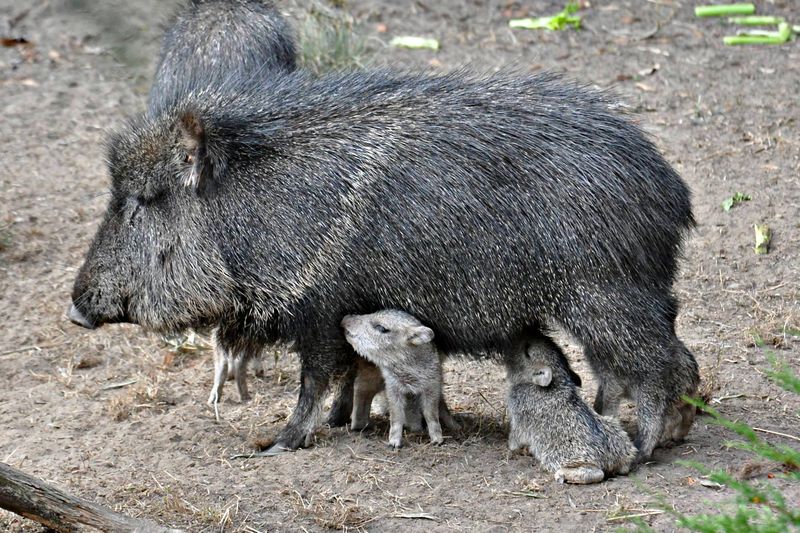 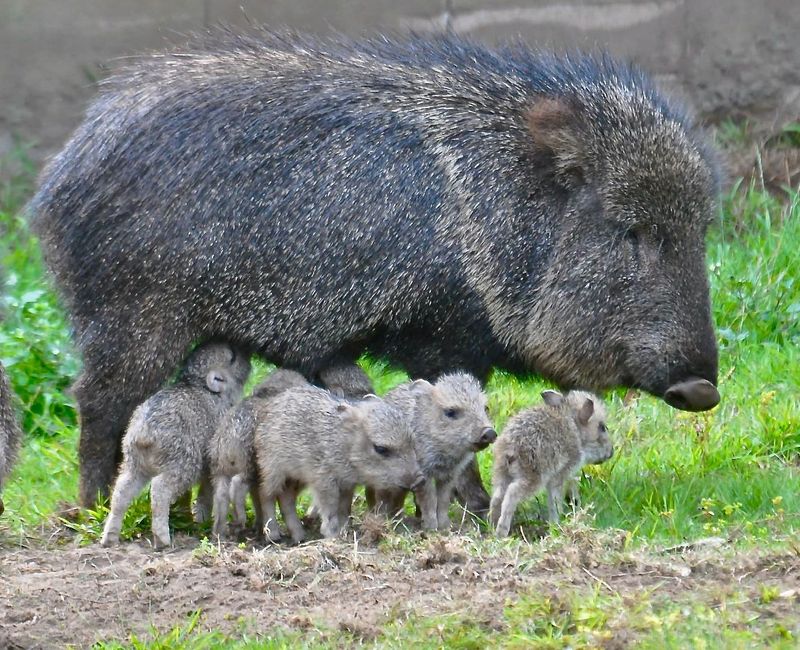 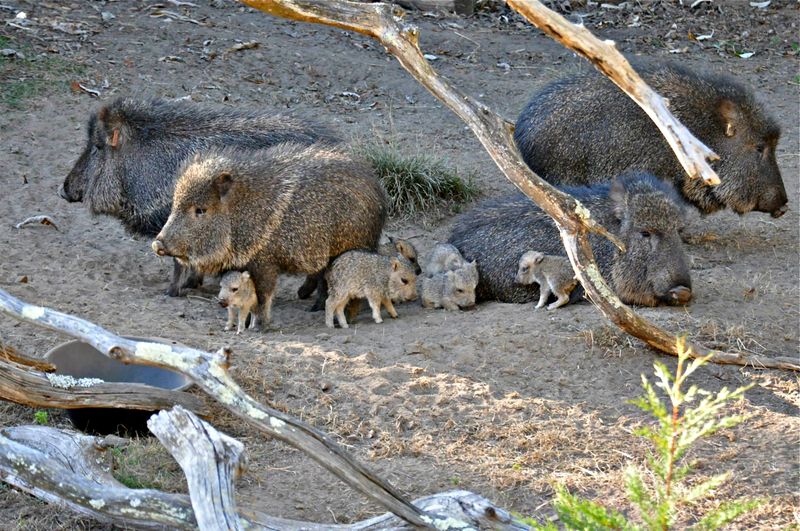 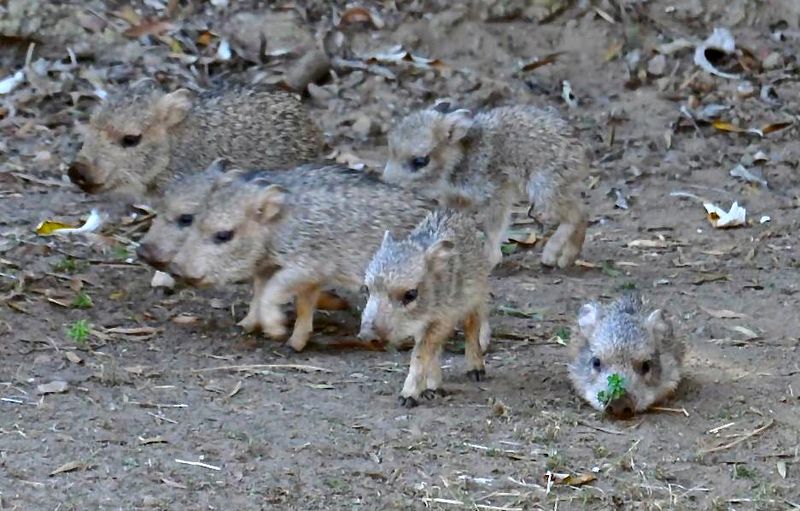 See a video of the playful pups:

See more photos below the fold! On March 24, São Paulo Zoo in Brazil welcomed a new Collared Peccary to the park! The male piglet was named Milo by the biologists who take care of him. Milo was born weighing only 740 grams, and in his first days, he was bottle-fed with milk specially prepared with all the appropriate nutrients needed for his healthy growth. Now three months old, he already eats tubers, fruits, seeds, and leaves. Peccaries can reach up to 55 pounds (25 kg) when adults, and gestation lasts about 145 days, with the mother giving birth to one or two piglets. 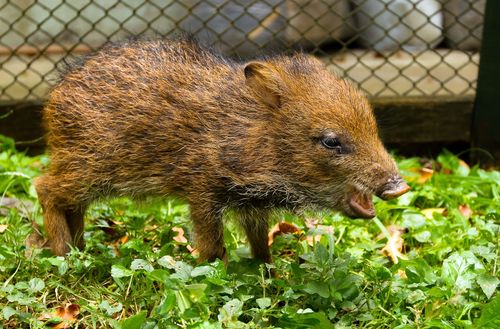 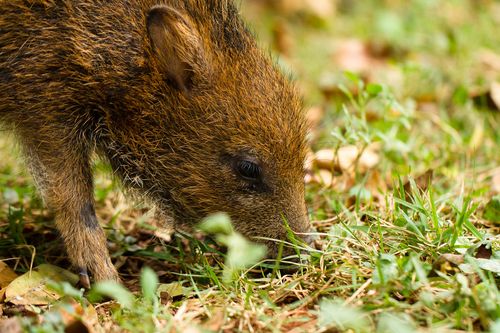 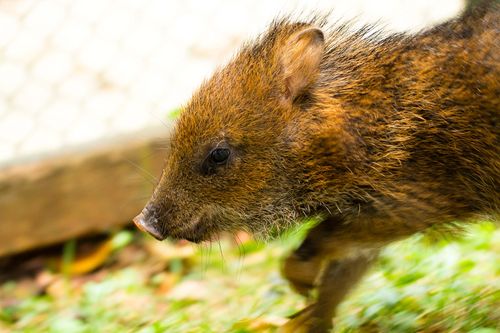 See and learn more after the fold.