New year, new Xiao Qi Ji! In January 2021, Smithsonian National Zoo's giant panda cub was a little wary during his first encounter with snow. This morning, the 16-month-old plowed face-first into the fresh powder, rolled around and relished the year's first SnowDay. His belly-sliding skills are 10/10! 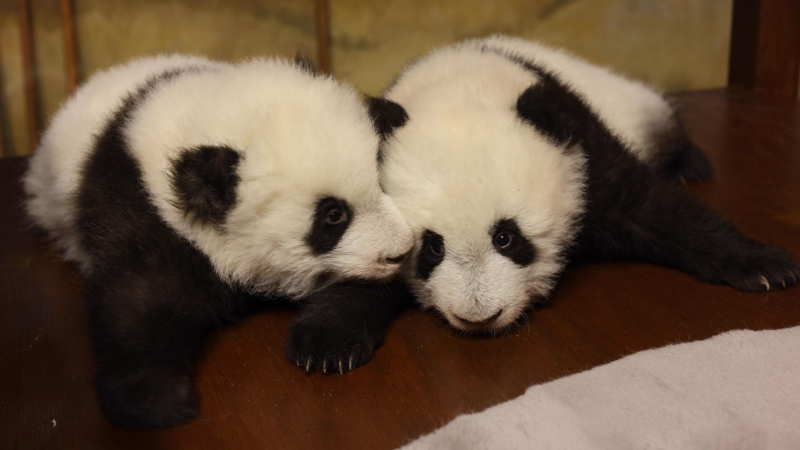 The moment has finally arrived: The two tiny panda cubs are visible to the public for the first time at ZooParc de Beauval! They are doing wonderfully and recently took their first steps! These first steps are sometimes uncertain, and result in a few "tumbles" for the adoring visitors.

And discover their commitment to preserve animal species on: beauvalnature.org

Many of you are (im)patiently awaiting the date when you can finally see Zoo de Beauval’s little panda twins, just over 100 days old, in person. Well TADAAA, here it is: Huanlili and Yuandudu will be visible in their indoor enclosure from the pandas gallery starting SATURDAY December 11, 2021!!! You have followed their birth, their first days and their first adventures… come and discover them “for real” in a few days!

And learn about their commitment to preserve animal species here:

A Look Back at Xiao Qi Ji's First Year 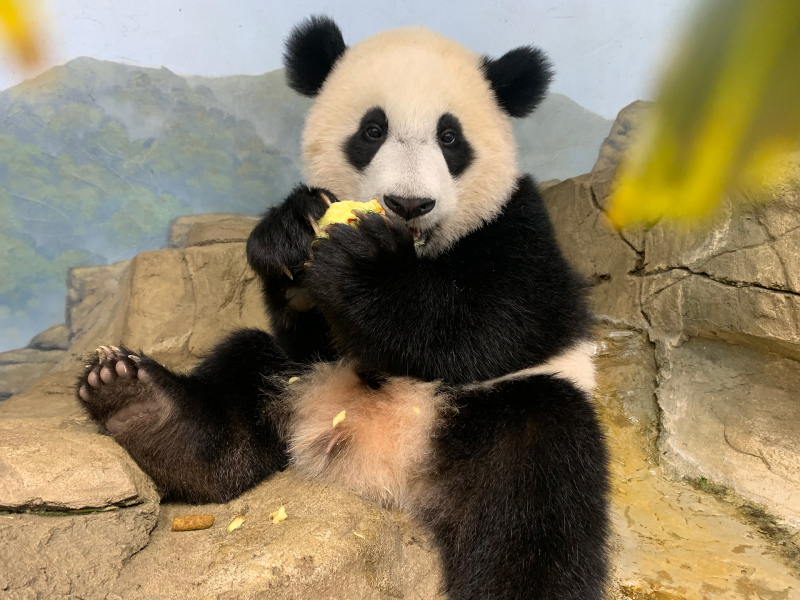 Panda Babies Are Fluffier Than Ever

Zoo Beauval’s Panda cubs are just over 3 months old now. We never tire of seeing Huan Huan, the female panda taking care of her babies with such dedication!

Learn about the Zoo’s commitment to preserve animal species at: http://www.beauvalnature.org

Watch Panda Twins Grow Before Your Eyes At Madrid Zoo

The Panda Twins Born September 6 at Zoo Madrid have grown like weeds in two months!

The transformation in these 60 days of life has been amazing. From the pink, visionless, delicate appearance and the 171.4 and 137.4 grams with which they were born, they have become beautiful giant pandas that already weigh 3.1 and 2.8 kilos, open their eyes and show off the parts more characteristics such as the soles of the hands with its opposable finger, the fully pigmented snout or its black scapular mark, unique in each specimen. 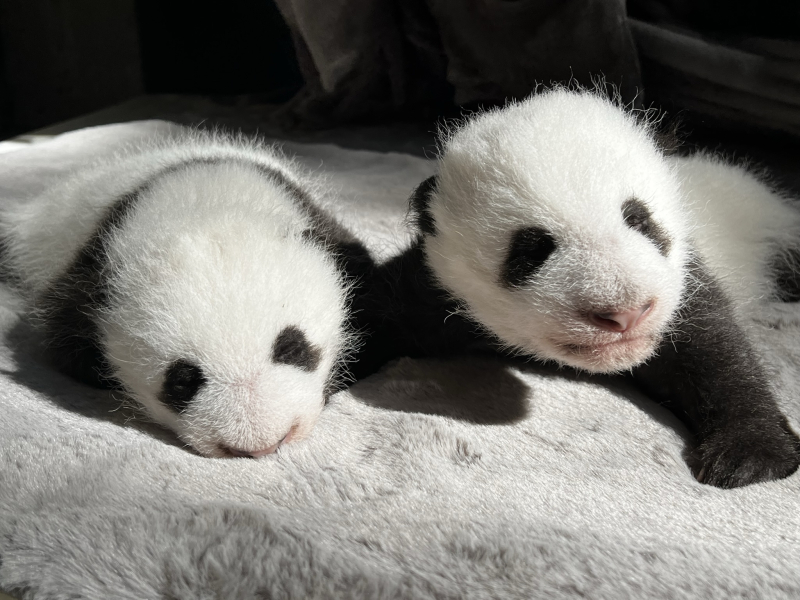 Voting on names, until December 5

Coinciding with this moment of presentation in the cradle of the twins, the Madrid Zoo in consensus with the Association of Zoological Parks of China, the country's highest body for the Conservation of Giant Pandas, opens, starting today and until next 5 December, the voting of the names in which all Internet users will be able to participate and win double entries for the most original answers of the two names chosen by majority.

Panda Cubs Open Their Eyes For the First Time!

Cotton Flower and Little Snow, the baby panda twins at ZooParc de Beauval, will be celebrating their 2 month birthday! Not only are they active and moving, but... they are starting to open their eyes! Little by little, their eyelids are finally opening. Their bodies are now abundantly covered in black and white fur. 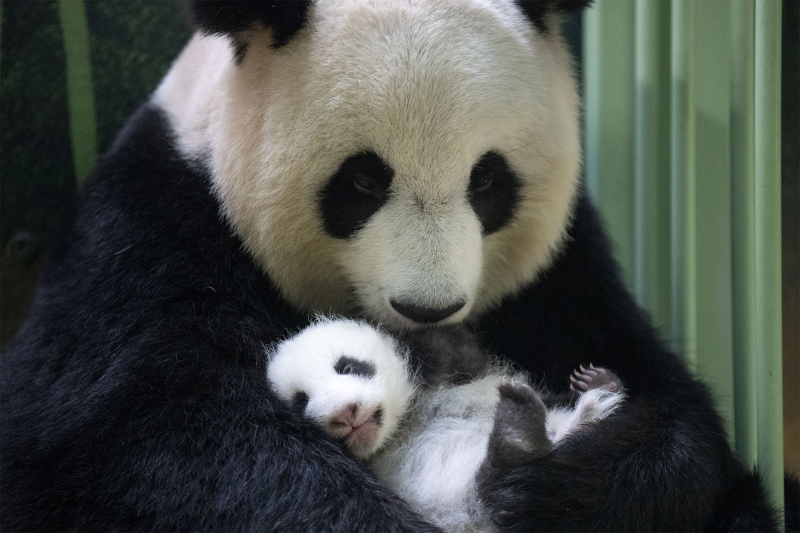 Their weight is perfectly on track: it has more than doubled in 1 month: 2.8 kg and 2.7 kg. Still a little way to go before arriving at the 105 kg of their mother Huan Huan!

The atmosphere is always calm and apart from all the hustle and bustle behind the scenes of the pandas. Beauval's teams of healers and veterinarians as well as the 2 healers from China take care of it as much as possible because Huan Huan is quite sensitive at the moment: nothing can distract her from her role as a mother.

Babies spend around 3 to 4 hours on their mother in turns and nurse twice a day. A daily bottle was added because Huan Huan does not have enough milk for her 2 little ones. It should be remembered that in nature, the mother panda would probably have abandoned her weakest baby.

Mother and young are not visible to the public, only via screens in the ZooParc. The babies are still far too fragile to go out into the outdoor enclosure. We will have to wait a few months.

Madrid, September 7, 2021 - After the twin birth of pandas yesterday at Spain’s Zoo Aquarium Madrid, the technical and veterinary team of Zoo Aquarium Madrid in close collaboration with the two breeding technicians of the Chengdu Giant Panda Base, have carried out the first neonatal examination in which the umbilical cord was tied and disinfected and they were weighed, with 171.4 and 137.4 grams, respectively. As for sex, it is still unknown since the sexual characteristics are not very marked yet. In the coming days, Chengdu technicians will be able to confirm it with greater confidence. 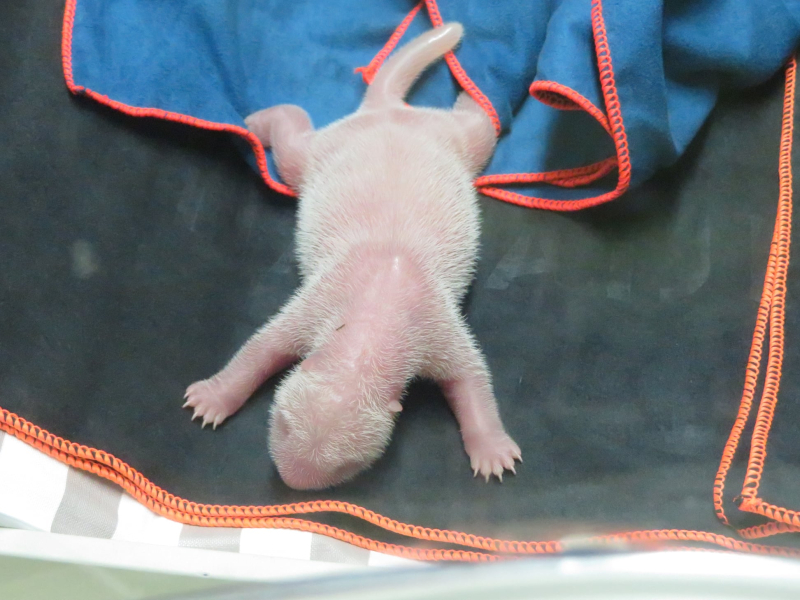 The first eight weeks will be vital for these delicate babies that will be exchanged in an incubator to ensure, individually, the breastfeeding of both in a space where they will enjoy greater tranquility and well-being that will facilitate their development little by little, thus ensuring their survival. Until they open their eyes, begin to pigment their skin in about 20 days and replace the hair with the white lanugo that covers them in these first days.

It will not be until approximately two and a half months, when they are usually strong enough, when you can see them and choose a name with Spanish-Chinese symbolism that will be submitted to a vote through the social networks of the Madrid Zoo.

The preservation of the Giant Panda in the world

The conservation program, outside its place of origin, carried out at the Madrid Zoo Aquarium is of vital importance for the survival of this species (Ailuropoda melanoleuca) which, thanks to the efforts of breeding centers and zoological institutions of everyone has managed to reduce their threat category from Danger to Vulnerable, according to the IUCN.

Through the Parques Reunidos Foundation, the Madrid Zoo collaborates with the National Forest Service of China and the China Giant Panda Conservation Office in the conservation and reforestation of panda habitat. This project contributes directly to the protection of 67 nature reserves with a total habitat of more than 1.3 million hectares.