After a few weeks of consideration, care staff have selected a name for orangutan Kitra’s new baby. Inspired by the line in the Dolly Parton classic that goes, “Your beauty is beyond compare / with flaming locks of auburn hair,” she will be called Jolene.

“Because we’re giving Kitra and her baby plenty of room to bond, we were unable to tell if she’d had a boy or a girl until recently,” said Kate Gilmore, who oversees the zoo’s primate area. “Once we confirmed she was a girl, our keeper team knew right away what they wanted to call her. They’ve been playing the song on repeat ever since!”

Cuddle Time With Kitra And Her Baby At Oregon Zoo

Learn more about Kitra and her baby at ZooBorns.com:

Kitra And Her Week-old Baby

Click here to read the announcement story on ZooBorns:

The Oregon Zoo’s primate family grew by a few pounds on Wednesday morning as 20-year-old Bornean orangutan Kitra gave birth to a new baby, adding to the world population of this critically endangered species.

Caregivers said the newborn entered the world on April 13, at around 11 a.m. The first-time mom and her new arrival are doing well in their behind-the-scenes maternity den.

A rare African antelope that almost didn’t live past its first few days is now a month old and well on the road to recovery at the Oregon Zoo.

Keepers were thrilled when 7-year-old bontebok Winter gave birth to a new calf Feb. 2. Bonteboks were once considered among the most imperiled mammals on the planet, and each birth is an important step toward ensuring their long-term survival.

Excitement quickly turned to concern though, when keepers saw that Winter, an inexperienced bontebok mom, was not nursing her newborn.

Roxy was born a year ago yesterday at the Oregon Zoo. She’s a Rodrigues flying fox, a critically endangered species of bat. Keepers hand-reared her after she was rejected by her mom.

Yesterday, Bruce Wayne, a Nigerian Dwarf goat born in 2018 at the Oregon Zoo's Jonsson Center for Wildlife Conservation celebrated his 3rd birthday! He now lives at the Zoo’s Family Farm with the rest of the goat herd. 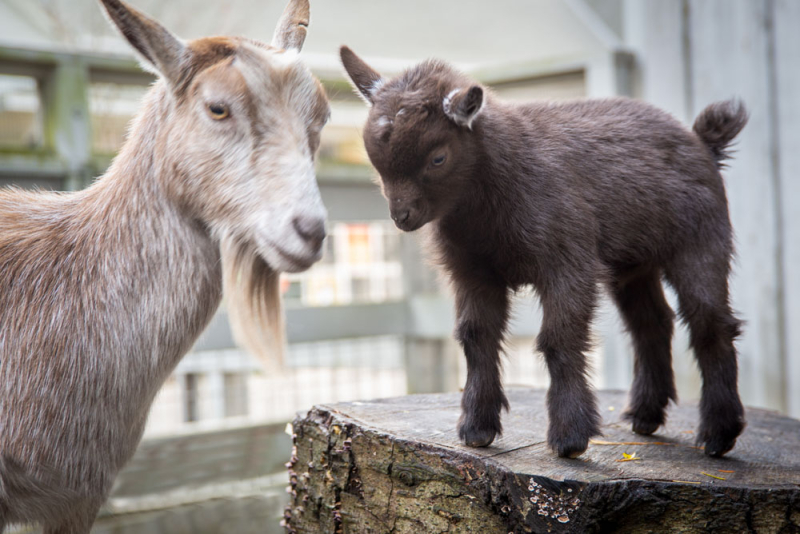 To celebrate the occasion, Oregon Zoo has shared some outstanding highlight clips and we are thrilled to pass them along to you!

The Nigerian dwarf is a miniature goat from West Africa. It has been domesticated as a dairy goat and can be found throughout the world. 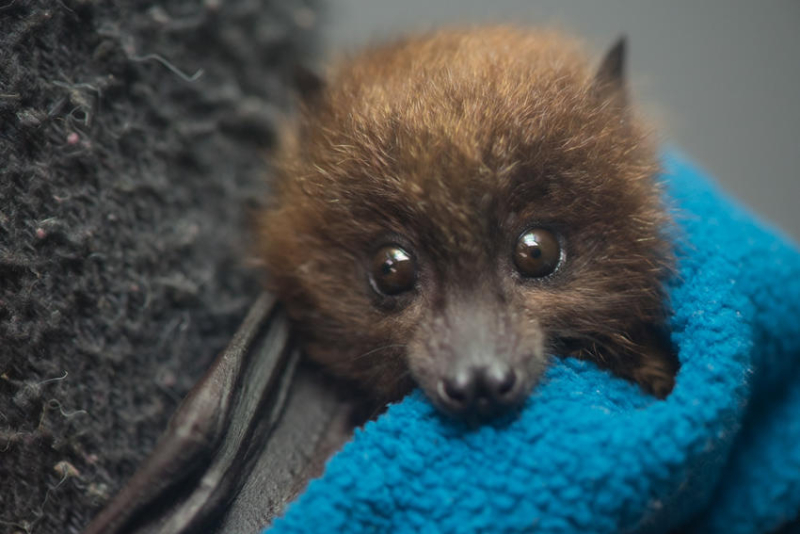 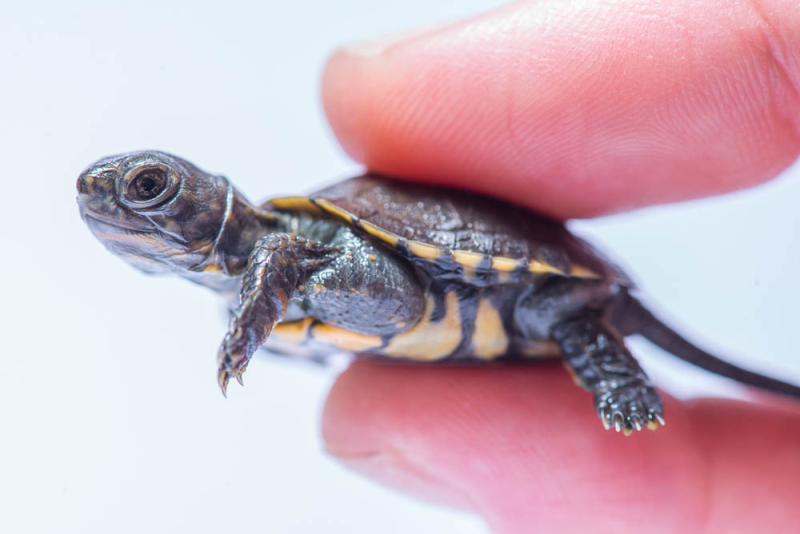 Fifteen baby Western Pond Turtles arrived last week at the Oregon Zoo. Smaller than a nickel, the hatchlings are extremely vulnerable to predators. To give them a fighting chance, the tiny turtles were collected from the wild and will be reared in the Zoo’s turtle conservation lab until they’re big enough to go back to the pond.

“Baby turtles are really small when they hatch, so they’re the perfect size for a lot of animals to eat,” said Shelly Pettit, the Zoo's Senior Keeper for Reptiles and Amphibians. “And the biggest problem they have right now are the invasive, or introduced, bullfrogs — they prey on turtle hatchlings right out of the nest.” 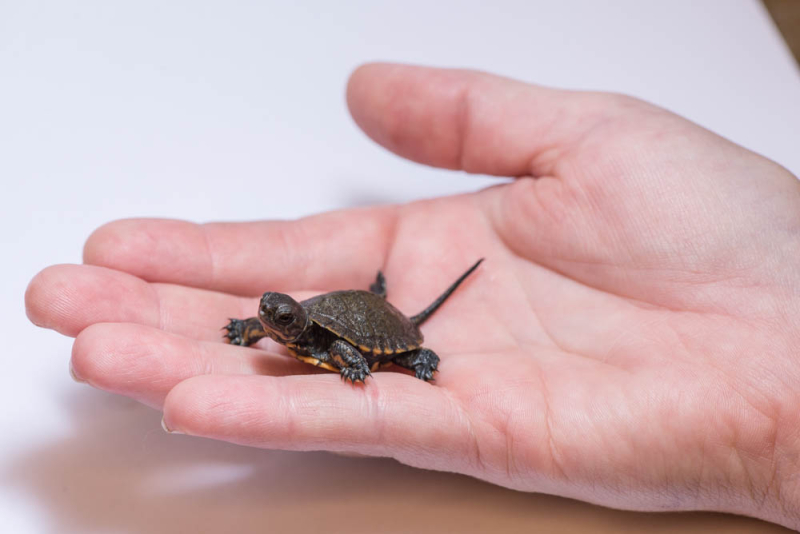 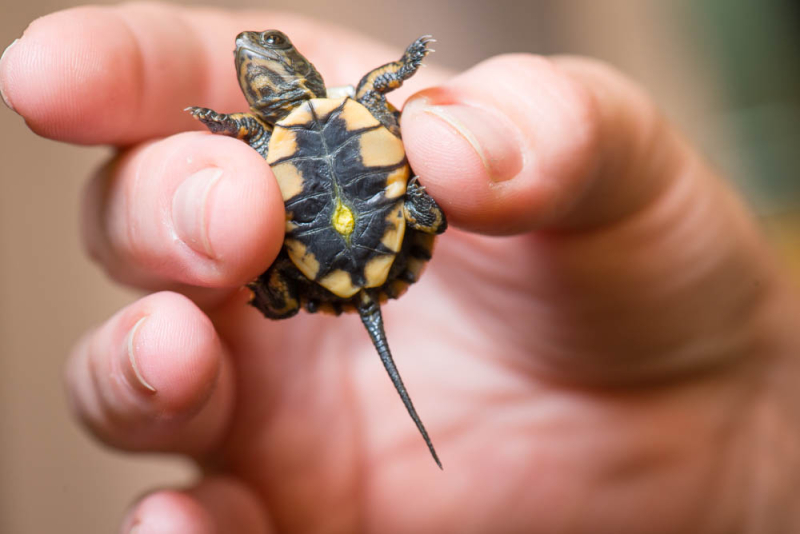 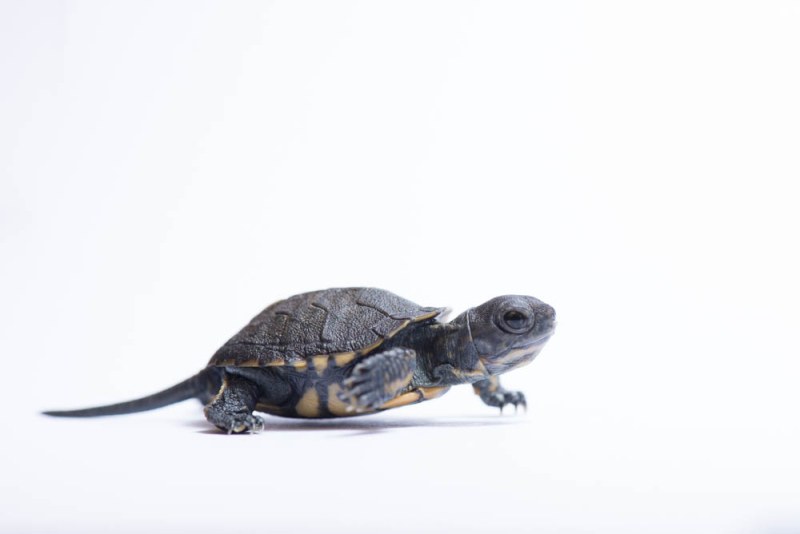 The Western Pond Turtle is native to the United States. They are currently classified as “Vulnerable” by the IUCN. Several predators threaten this species, especially the hatchlings, due to their small size and soft shell.

Raccoons, otters, ospreys, coyotes, weasels, and bullfrogs are predatory threats to the Pond Turtle. The American Bullfrog is the largest frog species in North America. It can tip the scales at more than a pound and has been driving the Pond Turtle to the brink of extinction.

Last week, Pettit and her colleagues took charge of 15 Western Pond Turtle hatchlings, collected by the Washington Fish and Wildlife Service from sites in the Columbia Gorge. The zoo is “head-starting” these tiny turtles, caring for them until next spring when they will be large enough to avoid the bullfrogs and have a fighting chance on their own in the wild.

Unlike recovery programs for other endangered species like California Condors or Taylor’s Checkerspot Butterflies — which take place offsite or behind the scenes — this conservation effort is easy to see. Oregon Zoo visitors can watch the small turtles as they grow inside the zoo's Nature Exploration Station.

The turtles at the Zoo will experience summer year-round, with heat lamps and plentiful food, so they don’t go into hibernation.

“We keep these little turtles warm, safe and well-fed in the lab,” Pettit said. “As a result, they grow to about the size of a 3-year-old during the nine months that they stay with us.”

Once the turtles reach about 50 grams (a little more than 2 ounces), they are returned to their natural habitat and monitored for safety.

The Western Pond Turtle, once common from Baja California to the Puget Sound, is listed as an endangered species in Washington and a sensitive species in Oregon. Two decades ago, Western Pond Turtles were on the verge of completely dying out in Washington, with fewer than 100 left in the state. Since then, more than 1,500 zoo-head-started turtles have been released back into the wild.

“We’re at a critical point with this species,” said Pettit. “We really have to grow them up in their population numbers if we’re going to save them in time.” 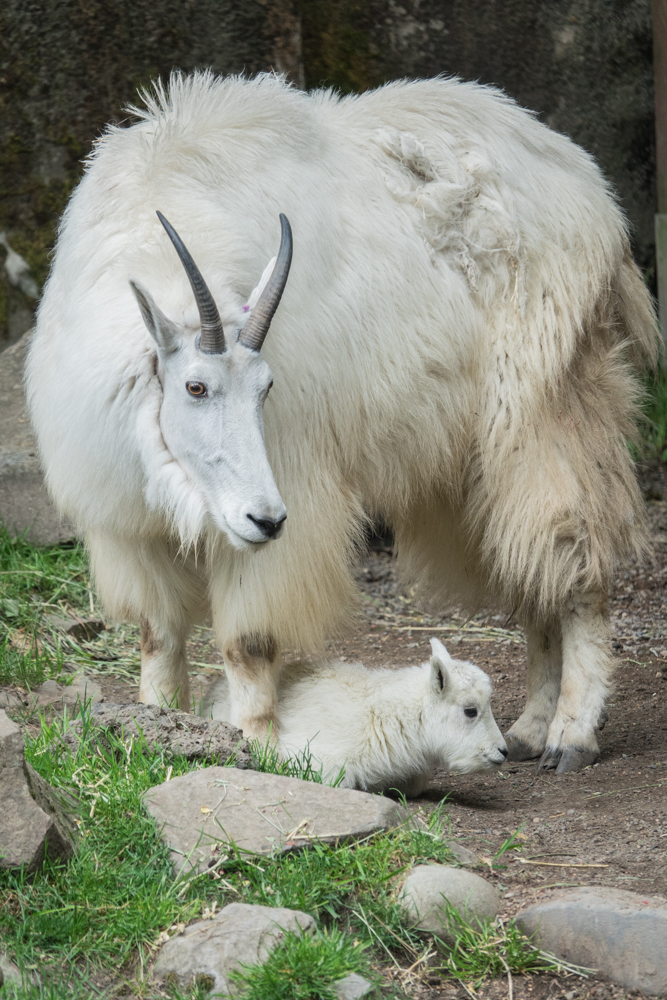 The Oregon Zoo announced the arrival of a new kid. Mountain Goat, Sassy, gave birth May 20.

Mom and kid can be seen amid the rocky crags of the Zoo’s “Cascade Crest” habitat, just past the zoo’s main entrance. 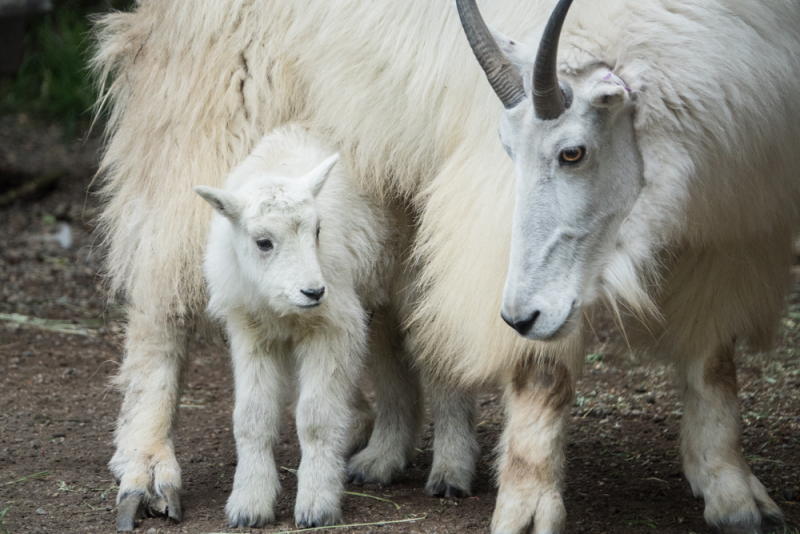 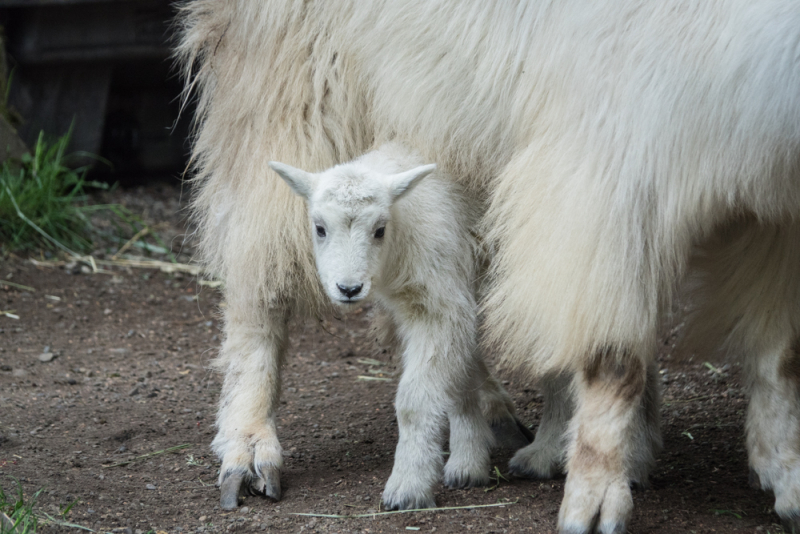 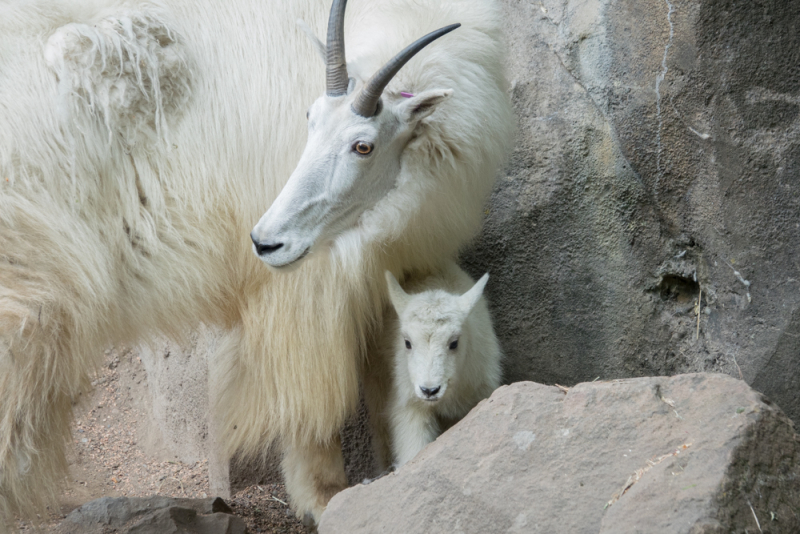 While mothers of some species keep their newborns hidden away for several weeks, Mountain Goat kids are typically on their feet within minutes after birth, quickly learning to navigate their sparse and rocky alpine environment.

Sassy’s kid was no exception, according to Amy Cutting, who oversees the zoo’s Great Northwest area. “She gave birth between 8 and 8:20 Saturday evening, and her kid was already on its feet by 8:30,” Cutting said. “We saw it do a playful hop less than an hour after it was born. Mountain Goat kids are extremely precocious.”

Zookeepers had been aware that Sassy was pregnant and saw signs of labor early in the afternoon before the birth, so they had been keeping a close watch into the night.

Now that the new kid has arrived, keepers will continue to observe the pair to ensure all is going well. However, it appears Sassy doesn’t seem to need any help, according to Cutting.

“Although Sassy’s a first-time mom, she grew up in a herd and has seen other births before,” Cutting said. “So far, she’s been very attentive and is nursing her kid regularly. The two have been heard vocalizing to each other and they seem to be bonding well.”

Caregivers won’t know whether the new kid is male or female until its first veterinary check, probably in about a week.

Cutting also shared that the Zoo’s other adult Mountain Goats (male Honovi, who is the father, and female Montane) seem unconcerned about the new arrival, and have been giving Sassy and her kid some space to get acquainted.

Montane is also believed to be pregnant, and could give birth within a month.

“We’re excited that Sassy went first, so Montane has a chance to observe her and hopefully learn a few things,” Cutting said.

Montane has not experienced birth before. She arrived at the Oregon Zoo in 2009 and was an orphan, rescued by Idaho wildlife officials.

In the Pacific Northwest, wild Mountain Goats live on various peaks in the Washington Cascades and across Oregon ranges, like the Elkhorns and Wallowas. They also can be seen on the Olympic Peninsula, where they are non-native — introduced there by a hunting group in the 1920s — and have become a threat to local wildlife.

In March, the National Park Service announced plans to relocate 90 percent of the Olympic Mountain Goat population to its native range. The Oregon Zoo has contributed $5,000 toward transport enclosures to aid in the effort. 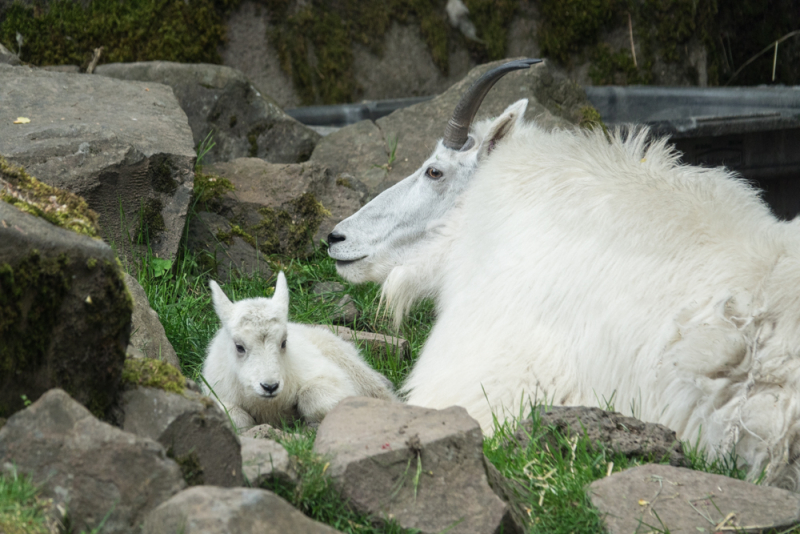