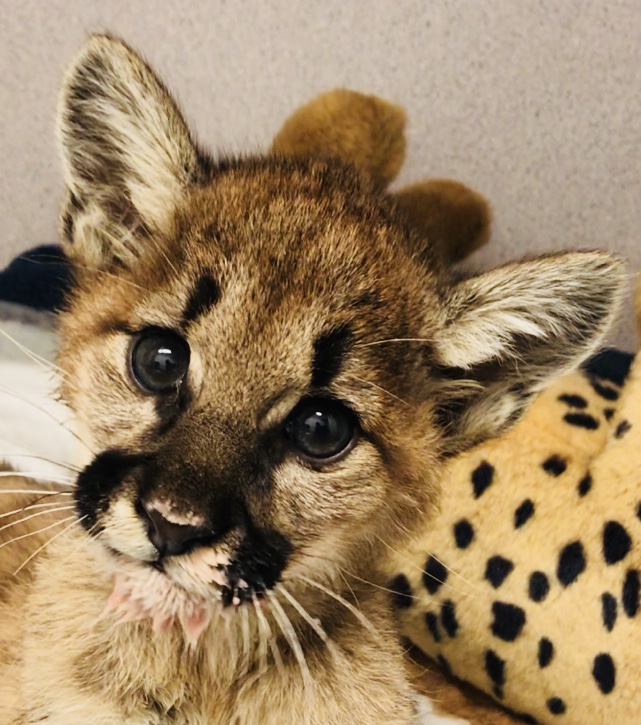 In just over one month, three orphaned Mountain Lion cubs have been rescued by the California Department of Fish and Wildlife (CDFW) and all have found sanctuary at Oakland Zoo.

The most recent, and youngest, arrived the night of December 23 in severe critical condition, more so than the first two cubs.

This third cub, estimated to be approximately 6-8 weeks of age, arrived near death, unable to stand or walk from such severe dehydration and starvation. Zoo vets found her starvation was so advanced, her body was consuming its own muscle mass. After six days of continuous IV fluids containing essential electrolytes and minerals, and round-the-clock bottle-feedings by Zoo veterinary staff, she began walking and showing signs of life. Vet staff joyously reports she is now regularly eating solid foods, showing spunky personality, and even ‘playing’ with her enrichment.

ZooBorns featured the story of the first two rescued cubs in an article from mid-December: “Oakland Zoo Cares for Mountain Lion Orphans”.

As determined by the CDFW, these three cubs cannot be released back in to the wild once their rehabilitation is complete, they would have no chance of survival. Unfortunately, they need their mothers to be effectively taught to hunt and survive. In the wild, even when the mother is present, the survival rate of Mountain Lion cubs is slim. Mountain Lions are becoming critically endangered in the California, often struck by cars or shot when seen as a threat in encroaching urban areas and developments. Oakland Zoo partners with the conservation organizations like the Mountain Lion Foundation and the Bay Area Puma Project to try and help conserve the species in the wild.

“Mountain Lion cubs need up to two years with their mom in order to learn how to survive and thrive. Human survival training is not possible. The Bay Area Puma Project supports Oakland Zoo’s efforts to care for Pumas that cannot be released into the wild,” said Zara McDonald, Executive Director of the Bay Area Puma Project. 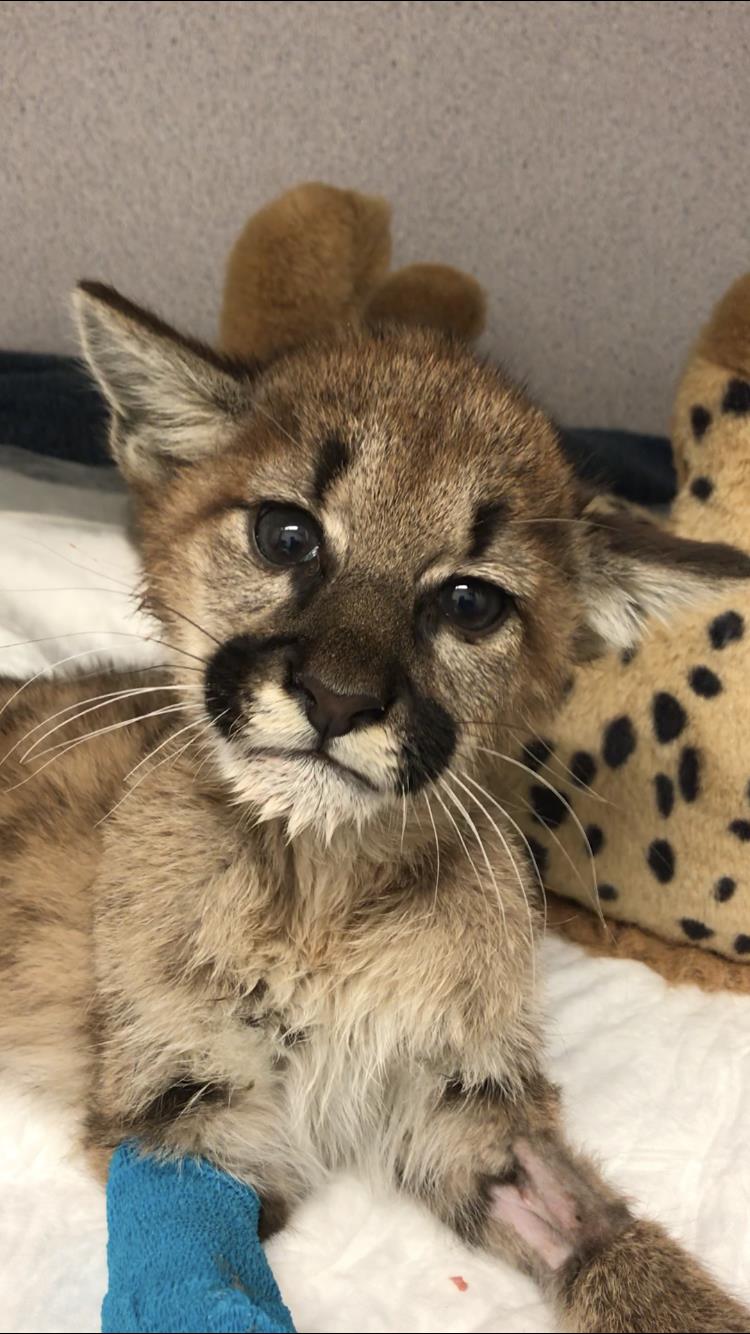 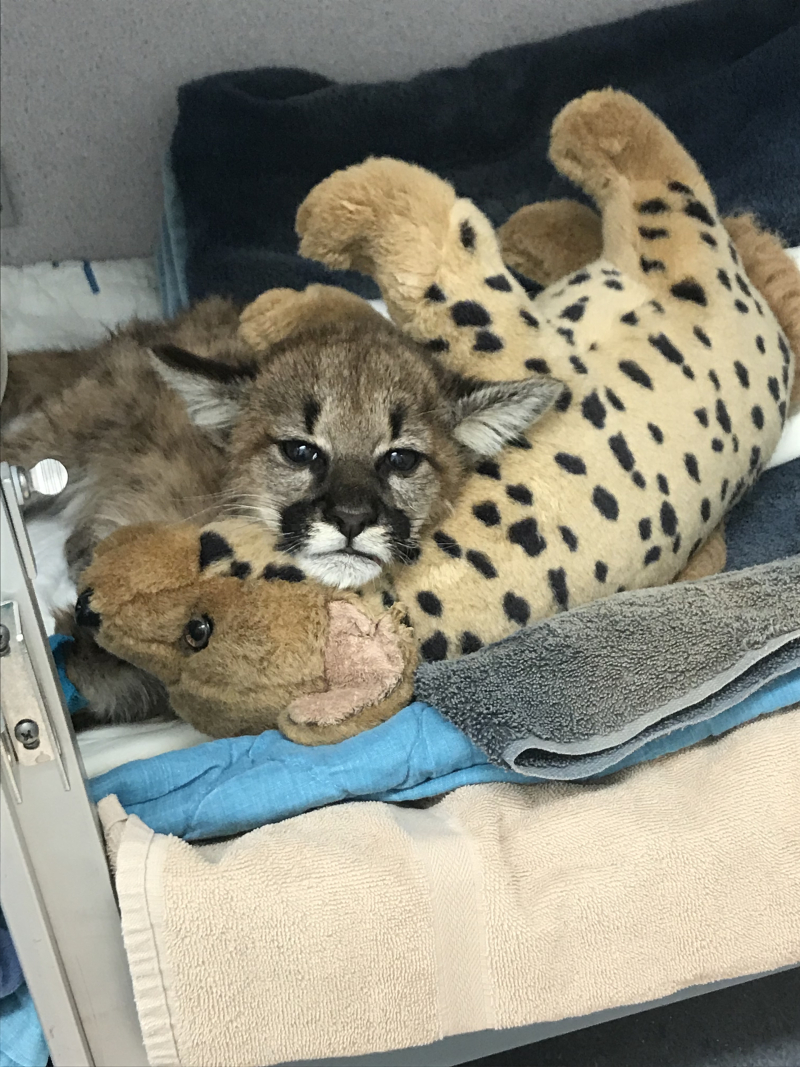 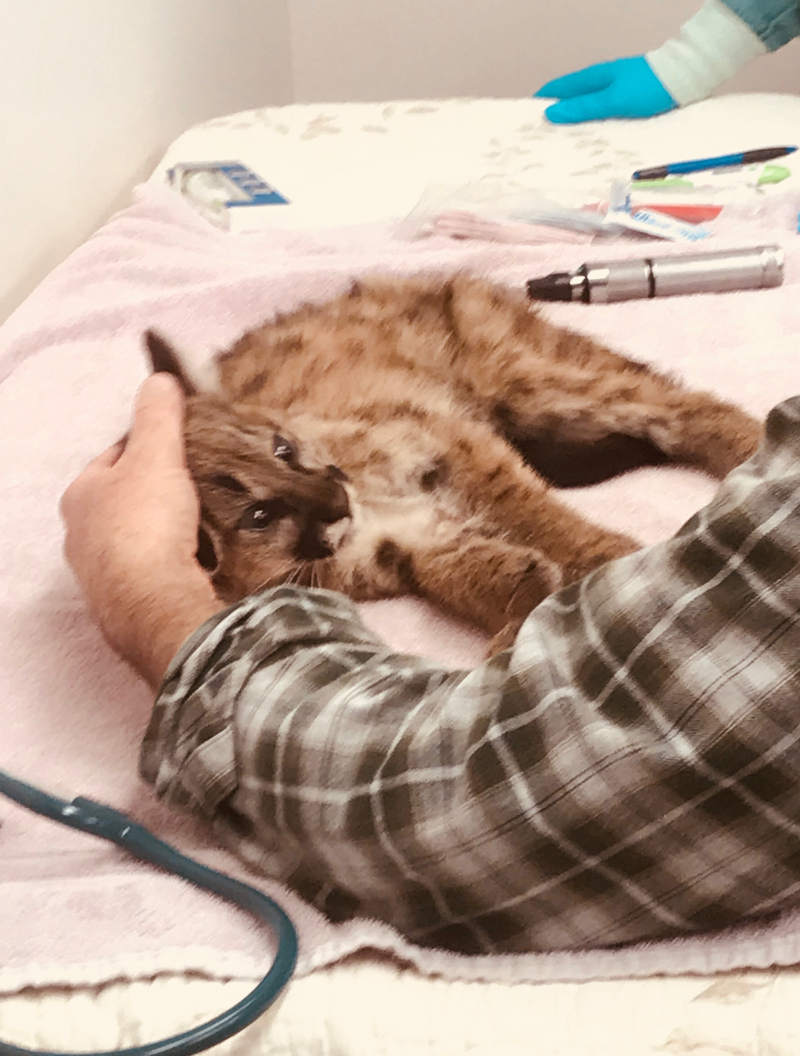 Yet unnamed, the newest kitten seems to be thriving in the past several days. Upon arrival, Zoo vet staff began treating her in the ICU with nine daily and overnight bottle-feedings of KMR (kitten milk replacer formula), grooming her with a soft cloth to mimic a mother’s tongue, and monitoring her progress constantly. She is now eating solid food. Her favorite stew is a combination of raw meat from Primal Pet Foods, chicken baby food, frozen mice that is warmed, and cod. 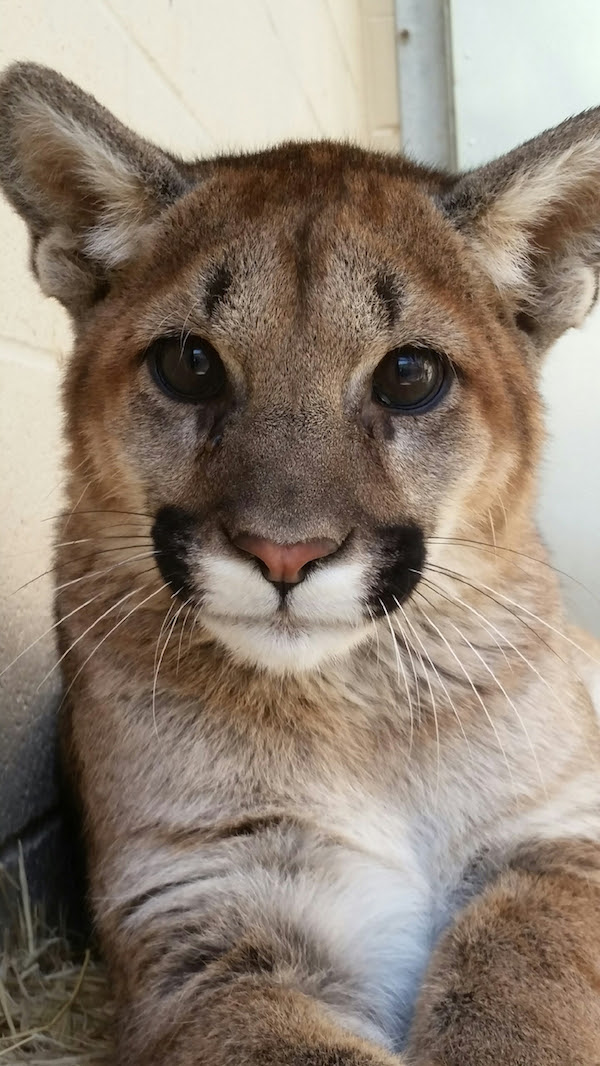 In cooperation with the California Dept. of Fish and Wildlife (CDFW) and the Feline Conservation Center, Oakland Zoo has taken in two orphaned Mountain Lion cubs. The cubs were found separately in Orange County, two weeks apart from each other. Due to their ages and geographic proximity to each other when rescued, Oakland Zoo veterinarians will conduct DNA testing to determine if they are, in fact, siblings.

An adult female Mountain Lion was struck and killed by a motorist in the area of the cubs’ rescues, leading to the conjecture that the cubs may have belonged to her and were separated as a result of her tragic death.

In response to a situation such as this, Oakland Zoo helped found BACAT (Bay Area Cougar Action Team) in 2013, in partnership with the Bay Area Puma Project and the Mountain Lion Foundation, to help save Mountain Lions caught in the human-wildlife conflict with the CDFW.

"The Mountain Lions of the Santa Anas are the most at-risk in the nation, equal to the Florida Panther in terms of the uncertainty around their survival. Orphaned kittens represent the death of a mother lions, and this isolated Orange County population cannot afford the loss. It will take protection of habitat and wildlife corridors, depredation prevention efforts, and enhancements of Southern California freeways to allow the Mountain Lions of the Santa Anas and Orange County to survive. The two orphaned kittens at the Oakland Zoo are evidence of that need," said Lynn Cullens, Executive Director of the Mountain Lion Foundation. 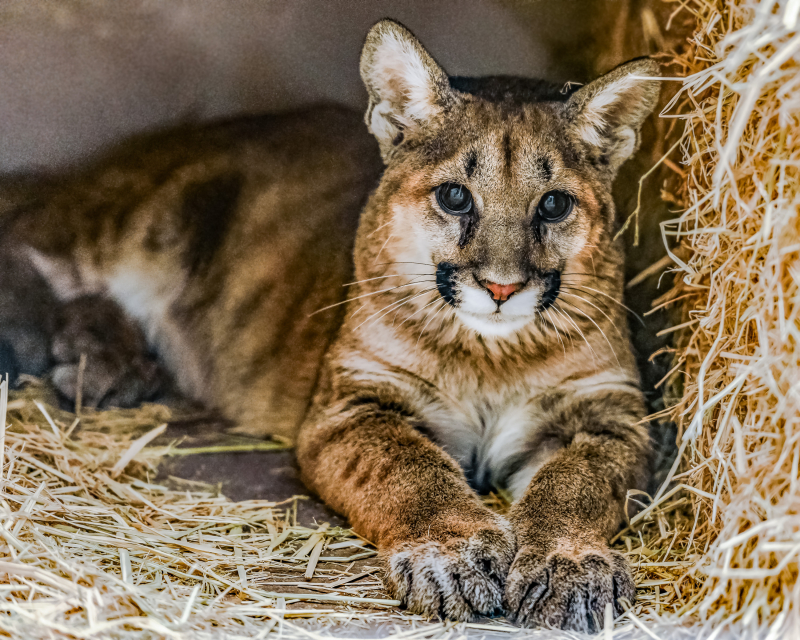 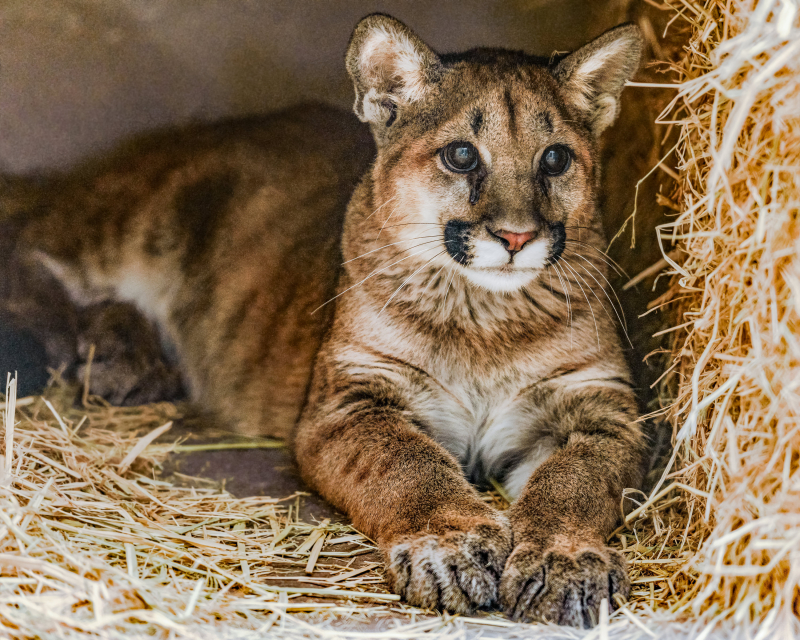 Both cubs are male and estimated to be 3-4 months old and weigh close to 30 lbs. They were found approximately 15 miles apart in Orange County’s Silverado Canyon and Rancho Santa Margarita.

The first was discovered in a resident’s backyard, and the second, approximately two weeks later, on the roadside. Residents reported the cub sightings and CDFW was contacted. The cubs were initially cared for by the Feline Conservation Center in Lake Forest before being brought to Oakland Zoo where they are currently being quarantined, given medical attention and cared for by the Zoo’s Veterinary Hospital.

The second male cub arrived at Oakland Zoo on Monday and is doing very well. Zookeepers describe him as ‘feisty’ compared to his counterpart, who is more shy and cautious. Mountain Lions are new to Oakland Zoo, and these two cubs and the events that led them to need a ‘forever home’ will serve as educational ambassadors at Oakland Zoo’s upcoming 56-acre California Trail expansion, opening in June 2018.

“It is an honor to provide a forever home for these young Mountain Lions, and honor their lives further by working to help conserve their wild counterparts. We have a lot of work to do to better protect and conserve pumas, from proper education to establishing wildlife crossings and proper enclosures for pets and livestock. Oakland Zoo will continue to work in our BACAT Alliance with CA Department of Fish and Wildlife, Bay Area Puma Project, Mountain Lion Foundation to inspire our community to both understand and take action for our precious local lion,” said Amy Gotliffe, Director of Conservation at Oakland Zoo.