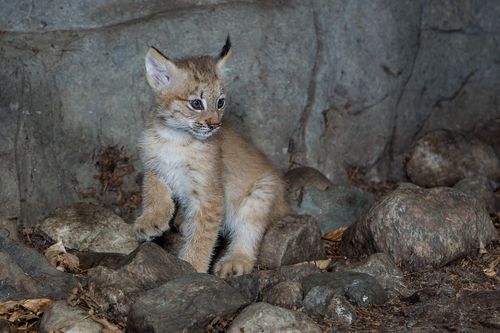 On June 4, the Espace Pour La Vie (Space for Life) Biodôme in Montréal welcomed three Lynx kittens into the world. The kittens are developing normally with their mother’s attentive care. She diligently nurtures her little ones, nursing them, cleaning them and keeping them warm. Their first medical exam found that they are one male and two females, all growing healthy and fast. Ten weeks after the birth, the kittens and their mother transitioned to a new home: a Laurentian maple forest exhibit viewable by the public. Their arrival in the habitat signals a new phase in their development, during which they will hone their reflexes with their mother’s help. Visitors can see the Lynx kittens playing together, interacting with their mother and exploring their environment freely. The father will be kept separately in the nighttime quarters, as the female could perceive him as a threat to her offspring.

Both adult Lynx are seven years old, and this is the third time the pair have reproduced at the Biodôme—a clear sign that they are healthy and happy in their habitat. In the summer of 2012, the female gave to litter of three, but only one kitten survived to adulthood. Caretakers at the Biodôme decided to supplement that kitten’s diet with bottle-feeding while allowing it to continue nursing from its mother. In January of 2013, the healthy adult offspring moved to another institution to be paired with another lynx for breeding. This year’s litter is growing even more quickly under the care of the more-experienced mother; this time, caretakers did not need to intervene with extra feedings. As the captive Lynx population’s growth rate is very low, the birth of new kittens increases its genetic diversity. This year's litter may eventually be moved to other institutions to form new breeding pairs. 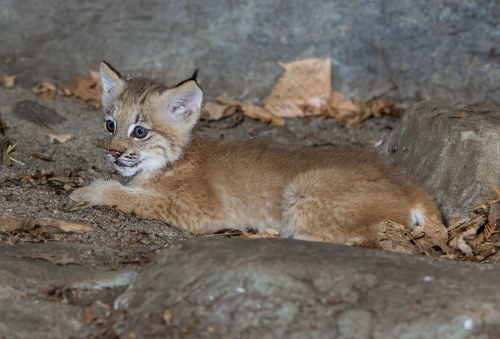 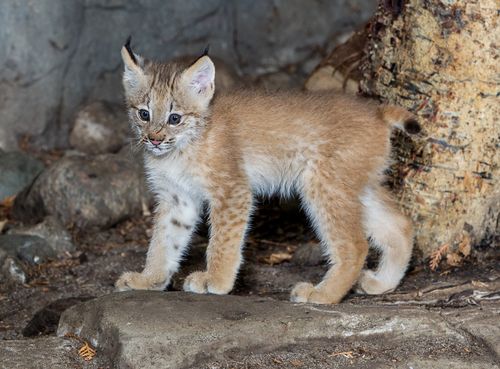 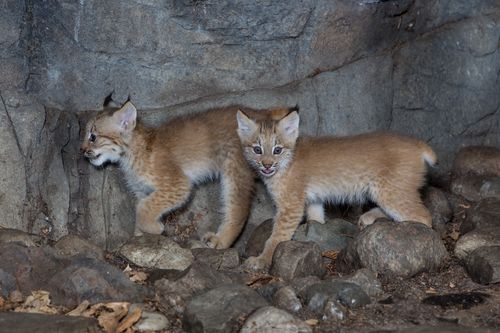 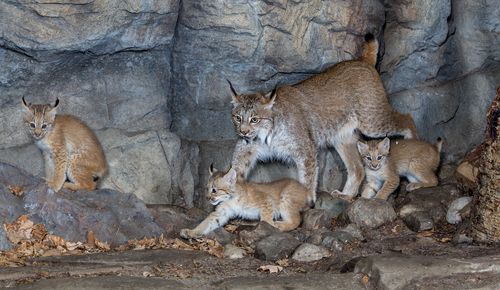 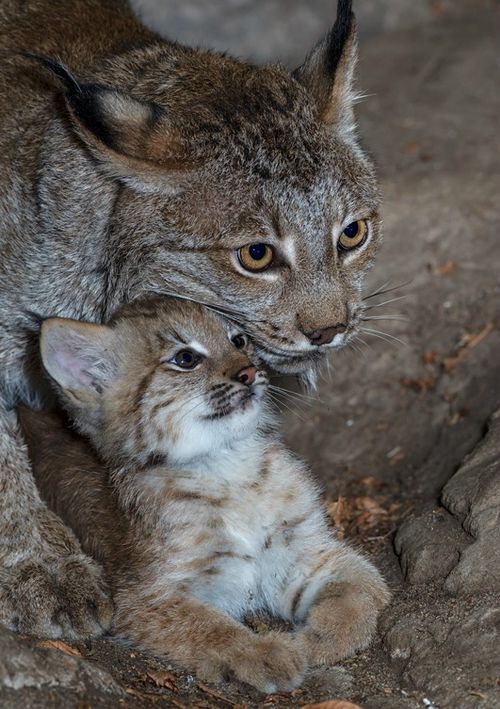 Last week, a 10-week old Lynx cub made his debut at the Montréal Biodôme. Visitors will now get to see the cub play hide and seek, learn to climb trees, and leap from rock to rock … all under the watchful eye of his mother.

In May, the animal keepers at the Biodôme suspected that the six-year-old female Lynx was pregnant, judging by her weight gain and her behavior. Since she was looking for a dark, safe place to give birth, a wooden shelter was built over her rest area. The Lynx cub was born during the night of May 26-27, in good health, while two other cubs died within just a few days. The surviving cub has done very well since then. He is still nursing, but has recently been developing a taste for small game. On July 26, during his general check-up, he received his first vaccination without any complaints. He weighs just over 5 pounds (2.3 kg).

Over the next few months, the young Lynx will be alone with his mother in the Laurentian Maple Forest habitat. During this time the six-year-old father will be kept in night quarters. Just as in the wild, the female raises her cub alone, since males can be a threat to their offspring. 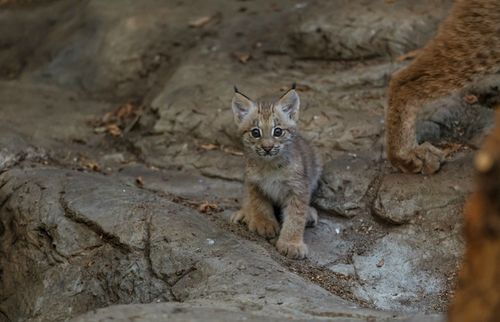 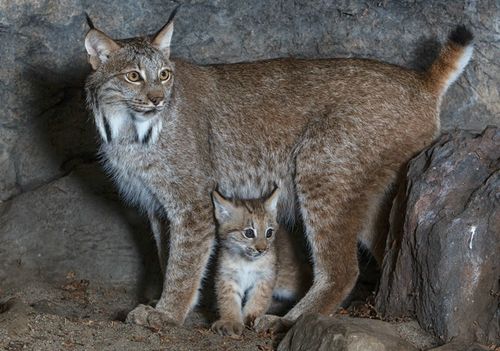 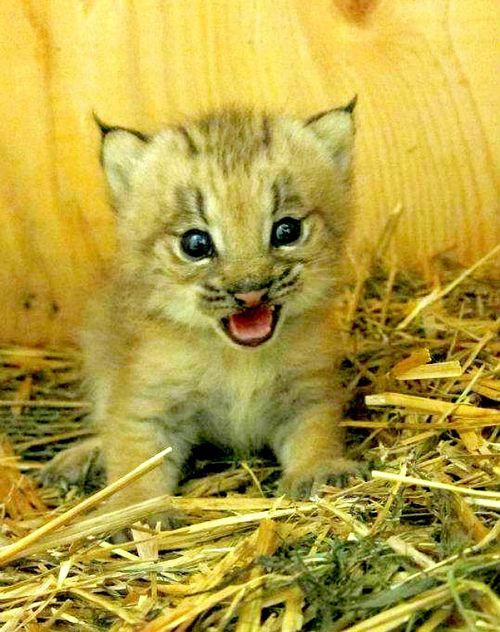 On May 27 this little Lynx kitten was born at the Montreal Biodome. The baby is growing very quickly -- just this week it opened its eyes and as of today it weighs 2.5 pounds (1.135 kg). Having recently started to pad around with it's relatively big paws, the kitten is showing great curiosity about its surroundings. Its mother is very protective and keeps a careful watch over her little one. In the wild, young stay with their mothers for about nine months before they go out on their own.

Their rich, thick fur keep them warm in harsh winters and their large paws spread out to act as snowshoes. That fur causes them to be hunted for their pelts. Largely solitary animals inhabiting high-altitude forests in Europe, North America and Asia, small groups of Lynx have been known to travel and hunt together on the ground, in trees, or even by swimming to catch fish. These carnivores feed on a wide range of animals, hunting at night and steering clear of humans, so they are rarely seen. However, keepers expect this Lynx to take its place in the habitat in late July. 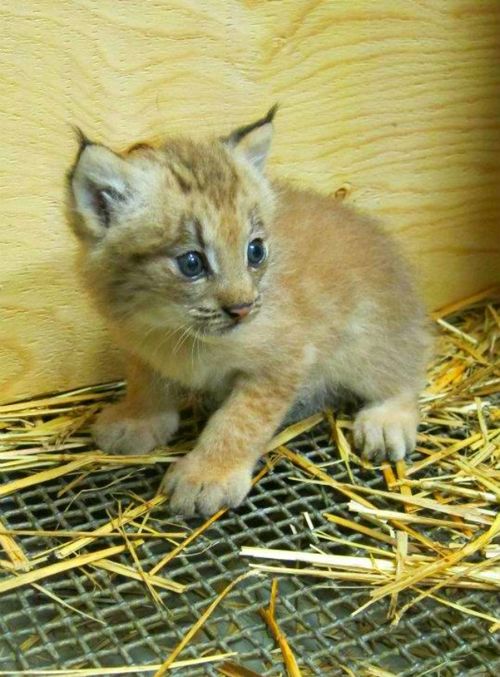 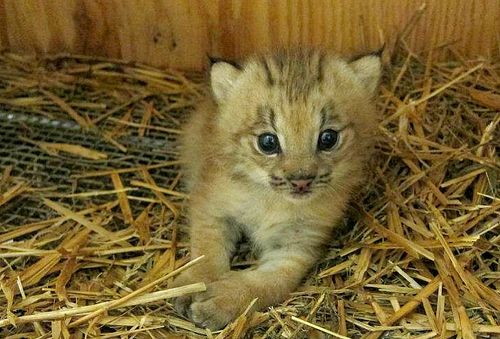 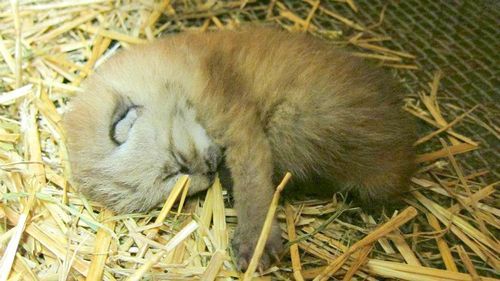 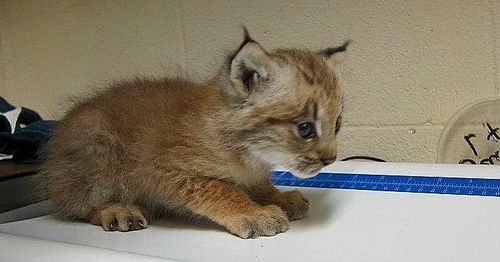