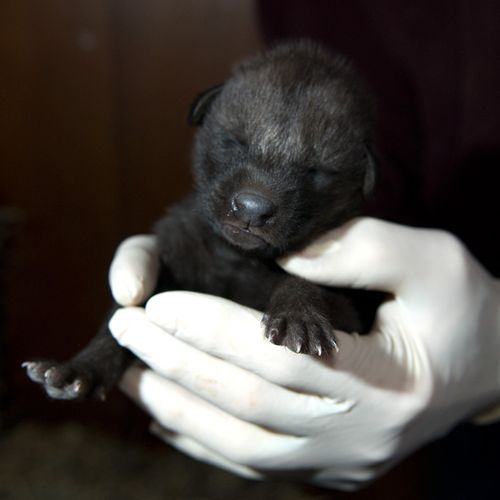 Although 2012 has only just begun, the Smithsonian Conservation Biology Institute in Front Royal, Virginia (SCBI-FR), already has something to celebrate in the new year: the birth of four Maned Wolf pups Jan. 5. It is the first litter born at SCBI-FR in two years and will play an important role in helping researchers maintain a viable, self-sustaining population under human care.

“Every pup born here helps us understand more about the biology of this incredible species,” said Nucharin Songsasen, an SCBI research biologist. “SCBI has a long history with the Maned Wolf, both in terms of studying the biology and maintaining the genetic diversity of individuals living under human care, as well as in conserving the animals in the wild.” 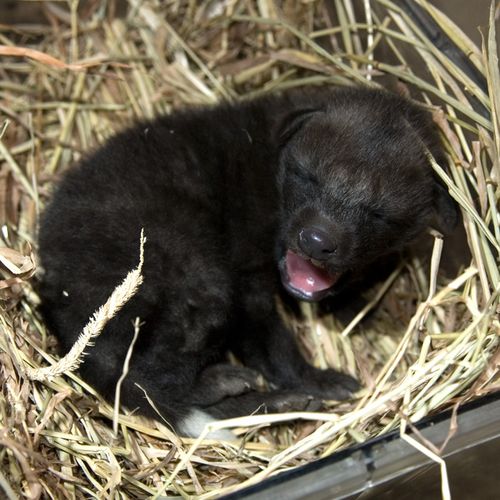 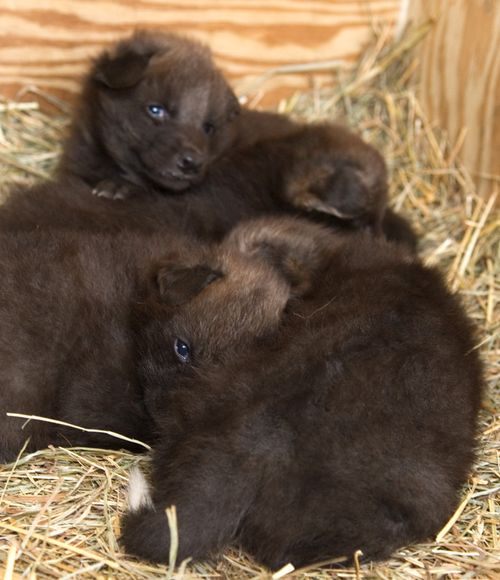 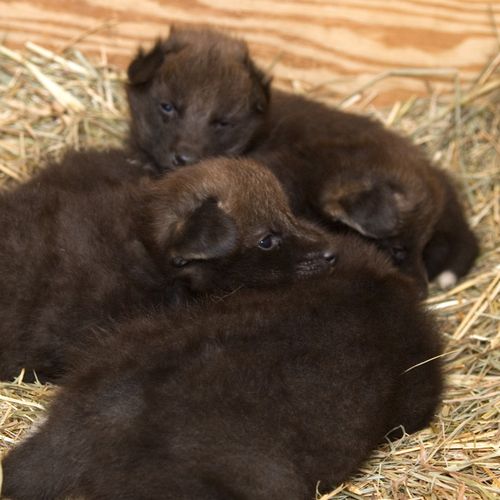 The four pups were born to mother, 8-year-old Salina, and father, 4-year-old Nopal, who was born at SCBI-FR. Maned Wolf pups have a 50 percent mortality rate in the first month, so keepers are monitoring them closely. This litter is particularly valuable because Nopal is the 10th most genetically valuable male among the 36 reproductively viable males in the Association of Zoos and Aquariums’ Maned Wolf Species Survival Plan, which matches animals across the country to ensure genetic diversity in the population. Seventy-two maned wolf pups have been born at SCBI-FR since 1975, and the facility currently has 12 wolves, including the pups. The National Zoo has two maned wolves on exhibit at the Cheetah Conservation Station.

Little Sister Wolf Pup Is Ready to Be Named 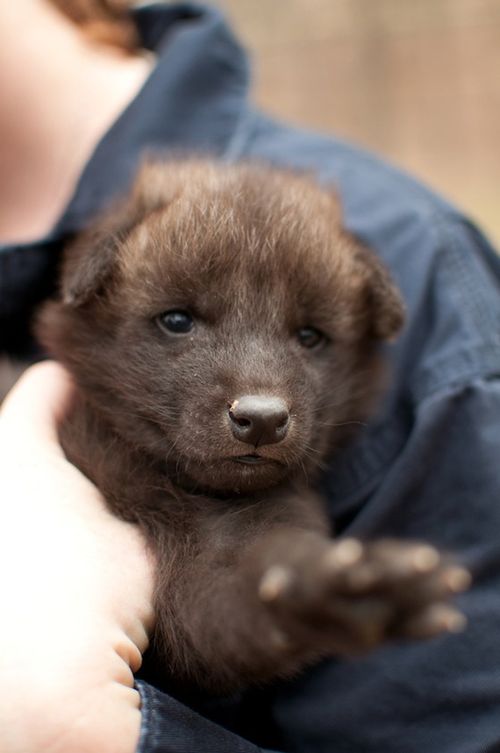 On February 6th, The Natural Science Center of Greensboro, North Carolina, welcomed three endangered Maned Wolf Pups. The Center's breeding pair Lana and Nazca are part of the Association of Zoos and Aquarium's Maned Wolf Species Survival Plan (SSP). You can visit the NSC's Maned Wolf blog to follow the progress of these cubs and to learn more about how you can help this species in the wild. Two of the pups, Vincent and Bonita, were named. The NSC is now holding a contest to name the third pup. Entries are accepted in person only, and we'll keep you posted on the winning name.  The choices are below the fold along with many more adorable photos of the pups. 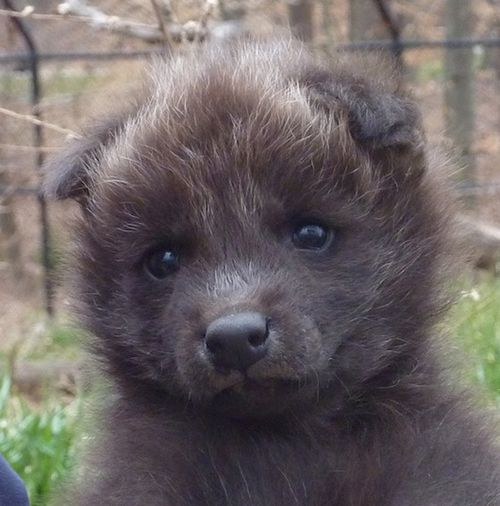 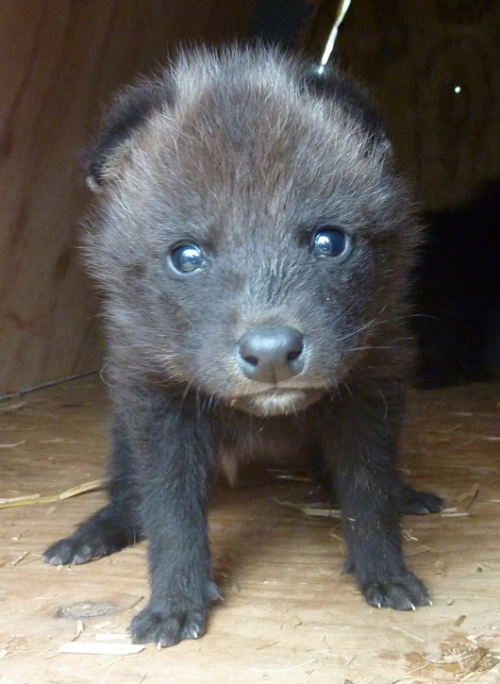 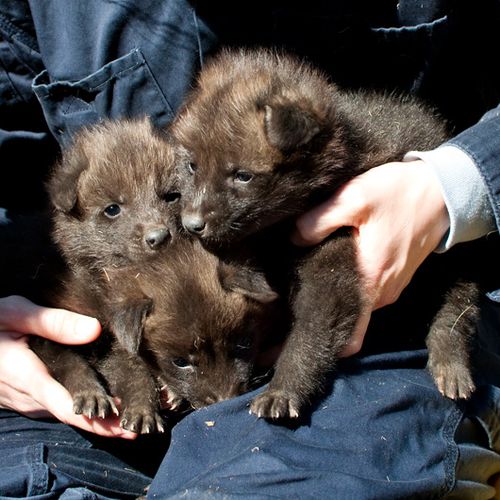 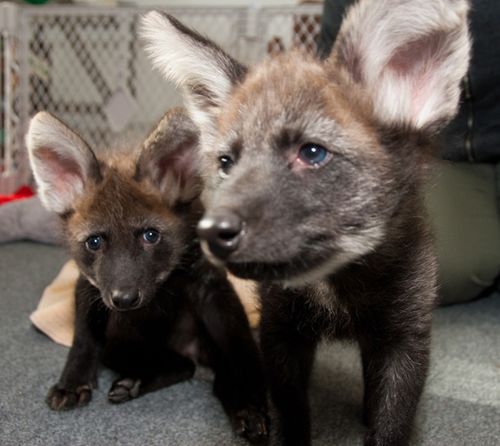 Dora and Diego, Houston Zoo's Maned Wolf pups are growing fast, but perhaps not as fast as their ears!  The two were born in late December and are being hand-reared at The Denton Cooley Animal Hospital. In order to help Dora and Deigo prepare for socialization with other wolves, Houston Zoo enlisted the help of an experienced "Mom". According to the zoo's blog, "the best option would have been to introduce them to another Maned Wolf litter that was being mother-raised but there were no other females due at the same time as our pups. So we looked internally and one candidate stood out as being right for the job: Taji, the Anatolian Shepherd Dog.  Taji was raised with the cheetahs and works as part of our Cheetah Ambassador Program." 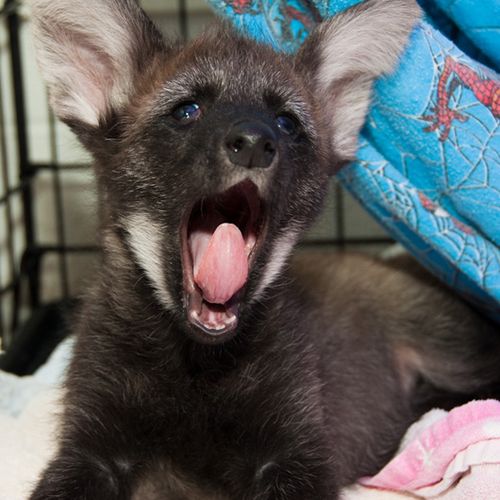 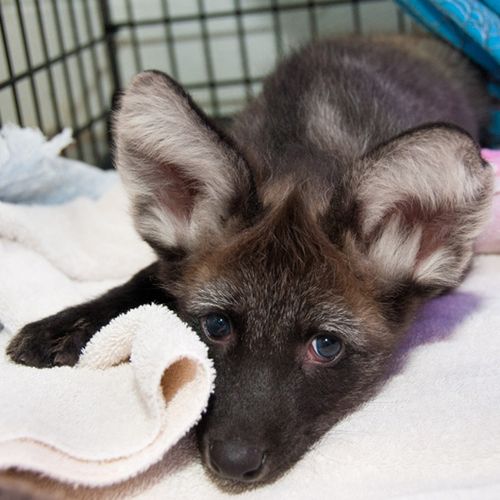 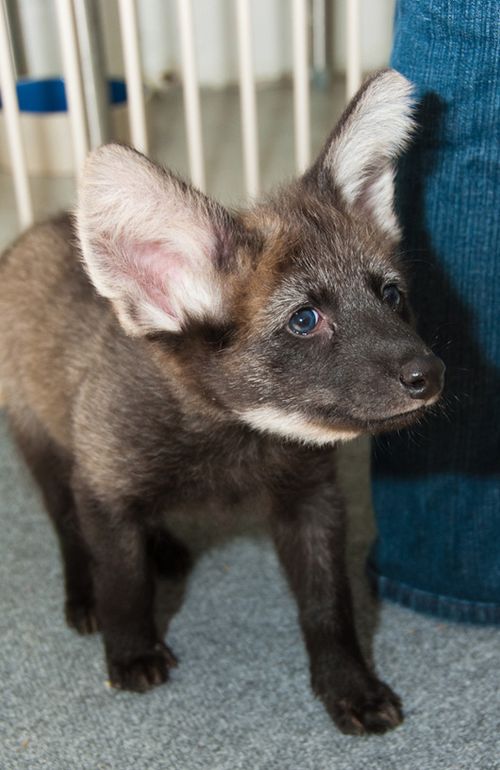 The pups cuddle up to auntie Taji... 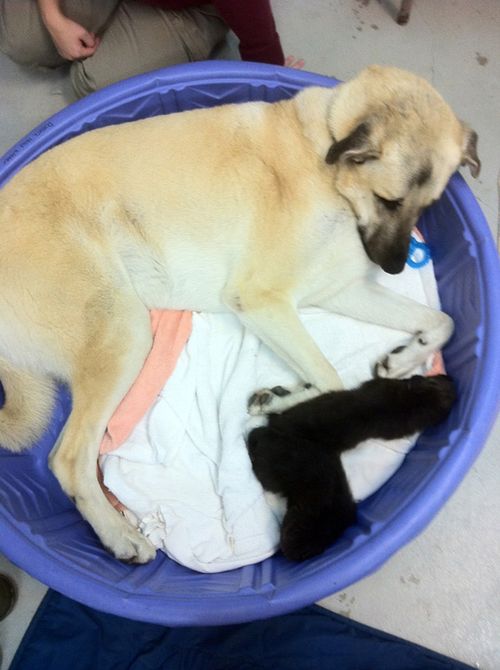 More cuteness below the fold... 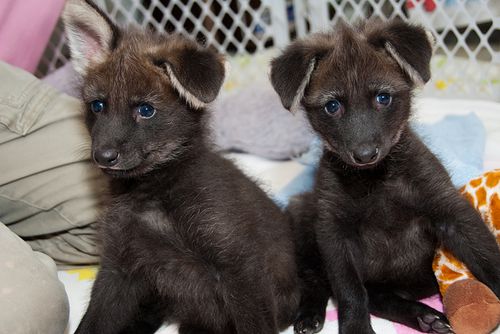 The Houston Zoo is proud to announce the births of two rare Maned Wolf pups. Born December 30, the pups are being hand reared at the Houston Zoo's Denton Cooley Animal Hospital. "This is the first successful birth of Maned Wolves at the Houston Zoo in over 10 years," said Houston Zoo Curator of Carnivores and Primates Hollie Colahan. "The pups weigh just over 5 pounds now and are being cared for around the clock by Zoo carnivore and animal hospital staff," added Colahan. The pups are fed 6 times each day and were just introduced to solid food last week. Maned Wolves are not closely related with any other living Canid (wolf, dog or fox) and one study suggests that they may be the sole South American surivivor of the mass extinction of large Canids at the end of the last ice age. 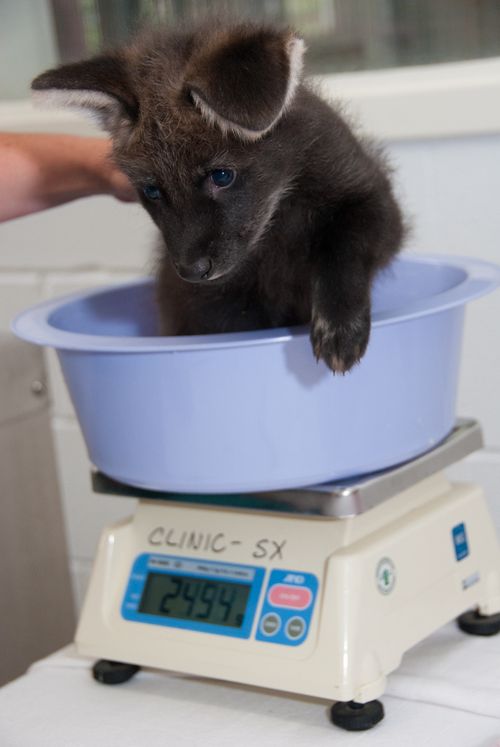 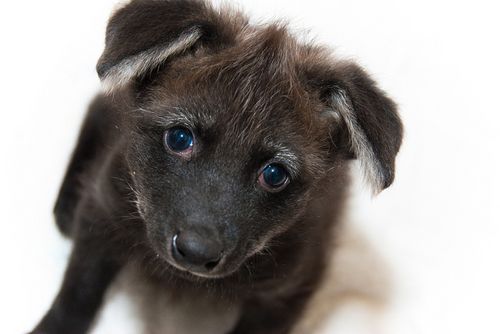 Maned Wolves are native to the grasslands, savannahs and tall grass prairies of Brazil, Argentina, Paraguay, and Bolivia. The species once thrived and ranged throughout much of South America.Unlike other wolves that live in cooperative breeding packs, Maned Wolves are solitary animals. Little is known about their lives in the wild where their populations are increasingly threatened by habitat loss to agriculture.

MUCH more cuteness below the fold...

Three rare maned wolf pups have begun exploring outside of their hut over the last few days at the Denver Zoo.  Cayenne, a female, and Santiago and Diego, both males, were born on Christmas Eve to mother, Itati, and father, Tega. The pups have remained close to mom but are becoming more curious daily. All three pups were just given a clean bill of health by  doctors. Denver Zoo visitors can see the pups as they explore at the zoo’s Feline Building just east of the main entrance. 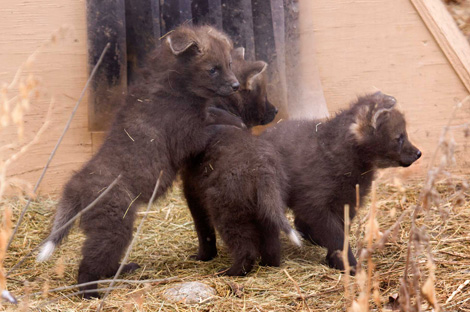 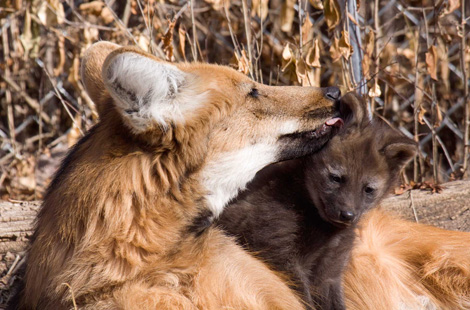 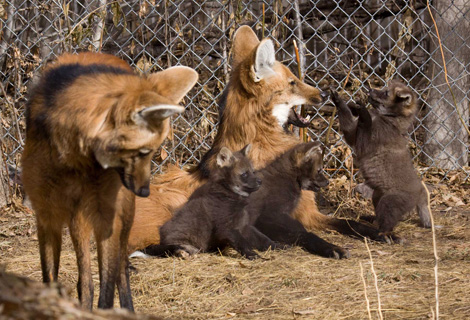 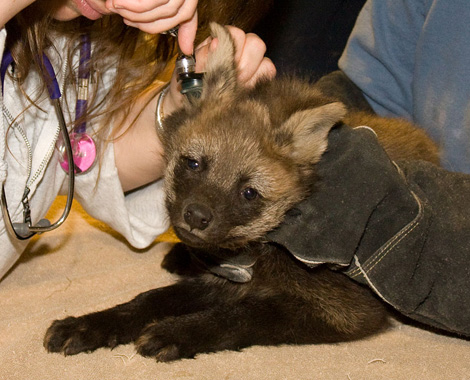 See their medical exam below the fold...

Meet three curious and playful little Maned Wolf pups who have just begun to explore their exhibit at the Denver Zoo. Born Dec. 24th, this is the first time the wolves have been seen by the public.

Sometimes called a "Red Fox on stilts" the Maned Wolf is actually not closely related to any other living wolf or fox. It is believed to be the last remaining species of a much older canine lineage. Recent research suggests its closest relative might have been the now extinct Falkland Islands Wolf.

The UK's Paignton Zoo recently welcomed three little Maned Wolf pups to mother wolf Maya and father Smolis. Shy and elusive, Maned Wolves are hard to see in the wild and are often bashful in captivity as well. South America's largest wolf, this species lives in monogamous pairs rather than in packs like other wolf species. 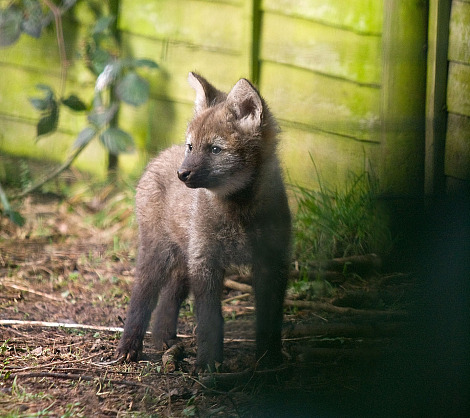 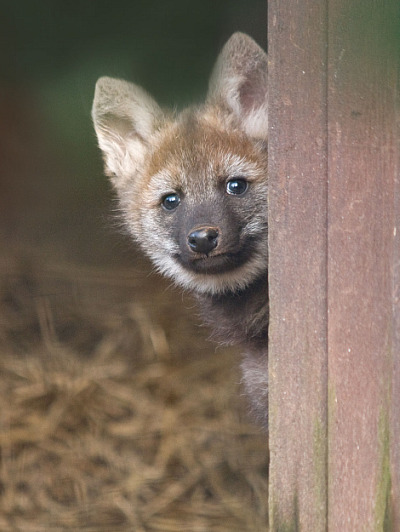 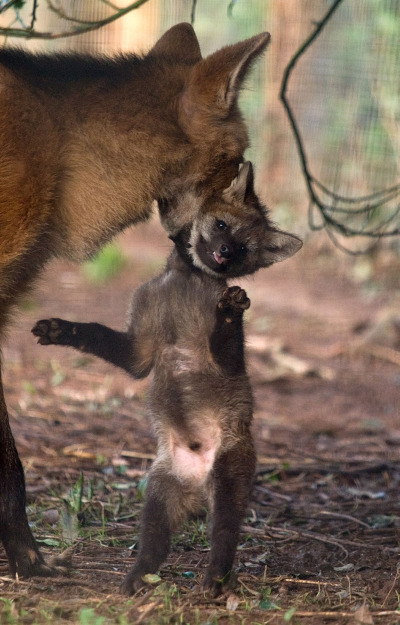 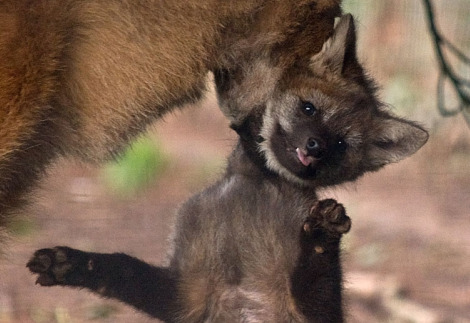