Baby Slow Lorises Are Unlike Anything You've Seen

Brookfield Zoo is thrilled to announce the birth of pygmy slow loris twins! Born August 26, 2020, these yet-to-be-named little ones belong to dam Chantu and sire Henderson. Located in Tropic World, we hope you'll be able to see these little ones soon.

Due to deforestation in their native Vietnam, pygmy slow lorises are considered endangered. Brookfield Zoo is proud to be part of the Species Survival Plan (SSP), which acts as a proactive approach to preventing extinction. 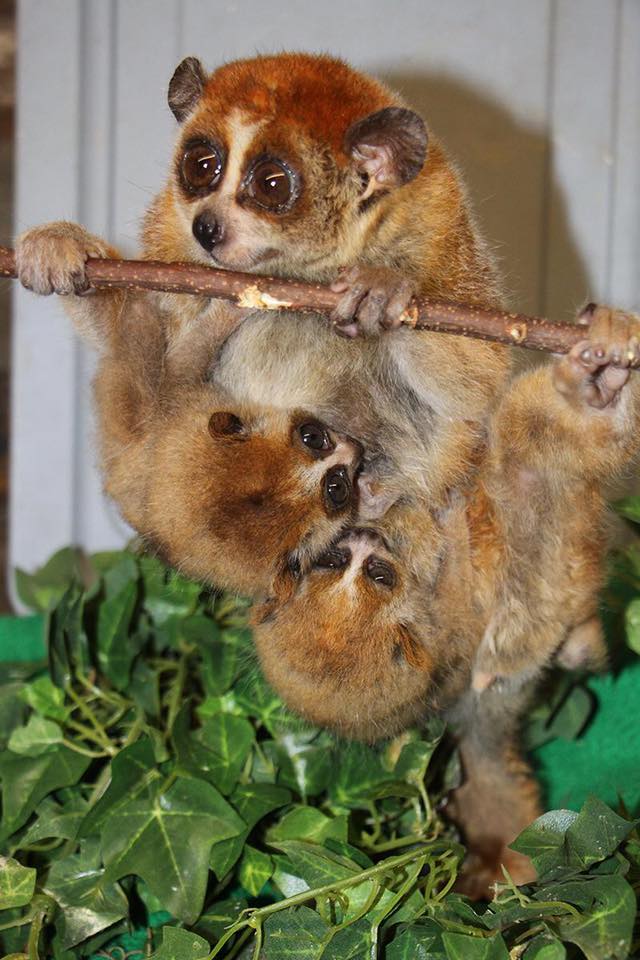 Born in August, the tiny male and female primates are healthy and active in their exhibit. They have been given the names Apollo and Artemis and were born to 3-year-old mom, Mihn Yih, and 7-year-old dad, Frasier.

The new births are part of a Species Survival Plan by the Association of Zoos and Aquariums. There are currently only 56 Pygmy Slow Lorises in human care in AZA zoos, including the four at the Little Rock Zoo.

"Our work in the field of conservation is one of the most important roles we have as an AZA-accredited zoo," said Director Susan Altrui. "To have not one but two babies born here is significant not just for us but for the future of this vulnerable species."

Apollo and Artemis were born three days prior to the calculated due date the Zoo's keepers had determined based on observation. So far, first-time mom, Mihn Yih, has been an attentive mother. As she works to gather food, she is careful that she is never too far from where the two siblings are “parked” on branches. As they get older, she will leave them for longer periods of time, until they are ready to be on their own. 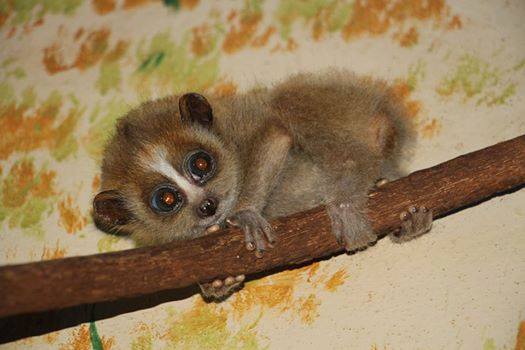 The Pygmy Slow Loris (Nycticebus pygmaeus) is a species found east of the Mekong River in Vietnam, Laos, eastern Cambodia, and China. It occurs in a variety of forest habitats, including tropical dry forests, semi-evergreen, and evergreen forests.

The animal is nocturnal and arboreal, crawling along branches using slow movements in search of prey. Unlike other primates, it does not leap. It lives in small groups with one or two offspring. An adult can grow to around 19 to 23 cm (7.5 to 9.1 in) long and has a very short tail, and it reaches a max weight of about 450 g (1.0 lb). Their diet consists of fruits, insects, small fauna, tree sap, and floral nectar.

The Pygmy Slow Loris is classified as “Vulnerable” by the International Union for the Conservation of Nature. The pet trade, habitat destruction and hunting are the biggest threats to its survival. 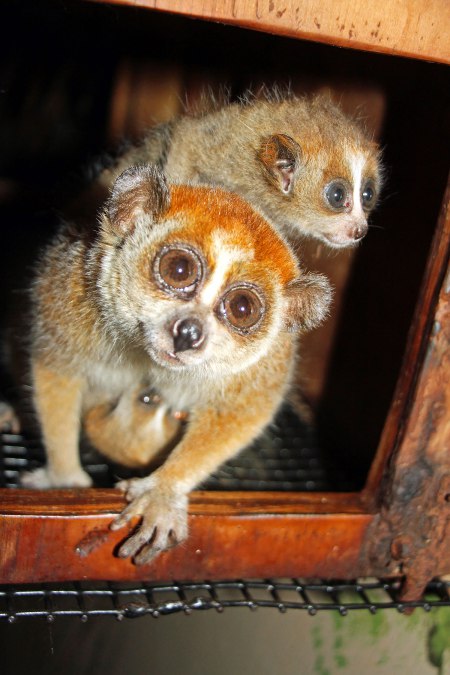 Tiny Primate Has a Really Tiny Baby at Columbus Zoo 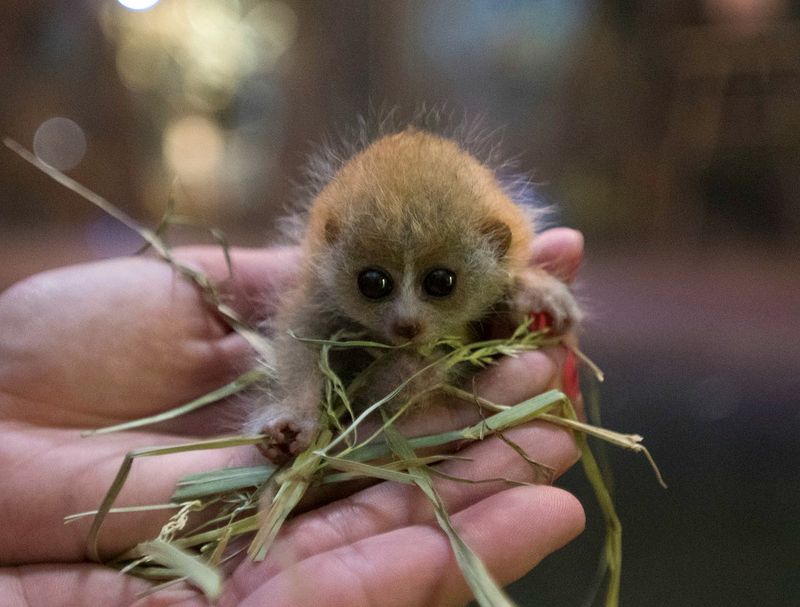 A very tiny primate at the Columbus Zoo had a very tiny baby on June 9!  Pygmy Slow Lorises weigh only one pound as adults, and their babies weigh only a few ounces but are born fully-developed and with eyes wide open. 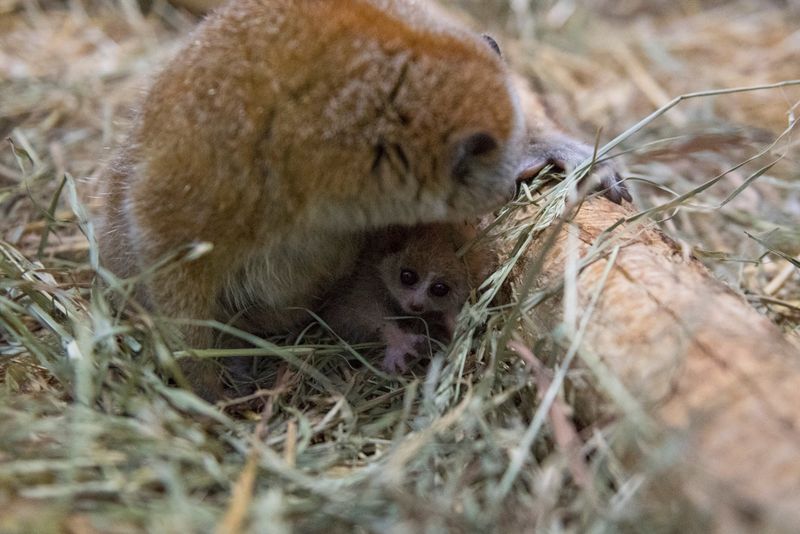 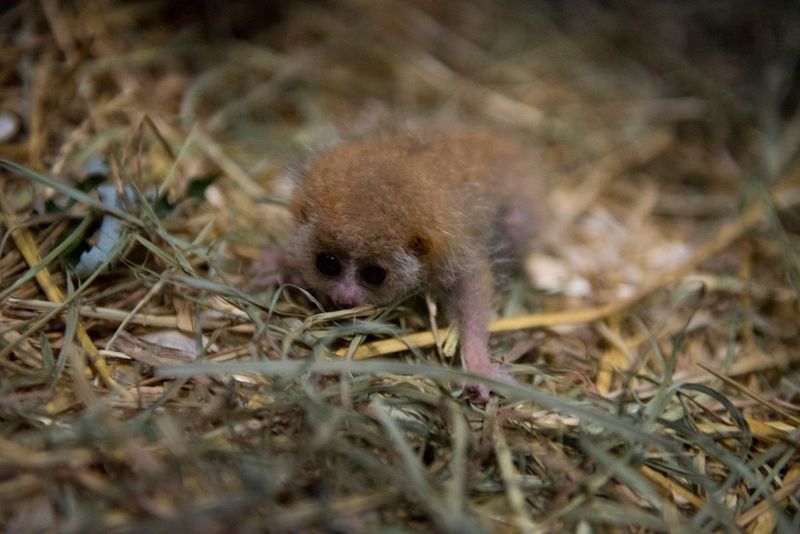 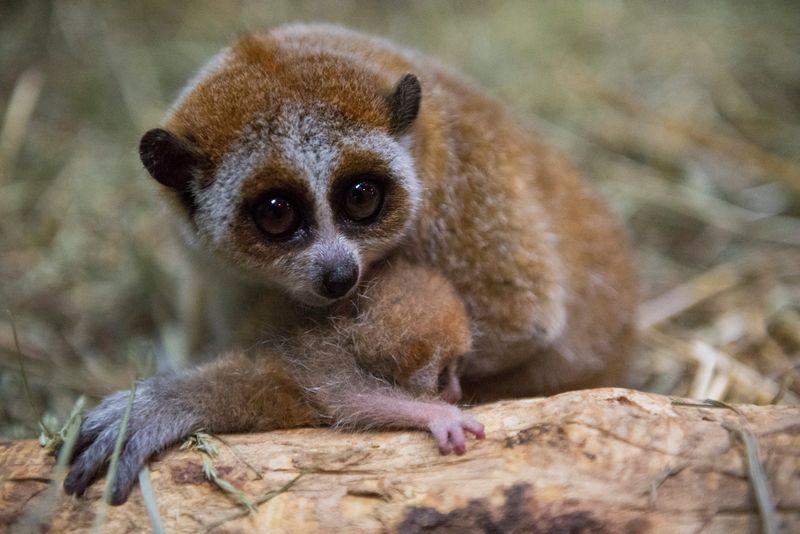 First-time parents Gouda and Muenster were paired through the Association of Zoos and Aquariums’ Species Survival Plan.  The baby’s gender is not yet known, but it is already climbing with mom Gouda in the zoo’s nocturnal house.

These little Lorises are not monkeys, but belong to a group of primates called prosimians.  Prosimians include Lemurs, Lorises, Aye-ayes, and Tarsiers.  Slow Lorises produce a toxin from scent glands on their elbows.  When alarmed, they lick the scent glands so the toxin becomes mixed with their saliva, rendering bite from these animals dangerous.

During the day, Pygmy Slow Lorises sleep curled up in the treetops. At night, they emerge to forage for leaves, fruits, and insects.

Pygmy Slow Lorises are native to southeast Asia, including Vietnam, Laos, and Cambodia. Their habitat was devastated during the Vietnam War, and they are listed as Vulnerable by the International Union for Conservation of Nature. 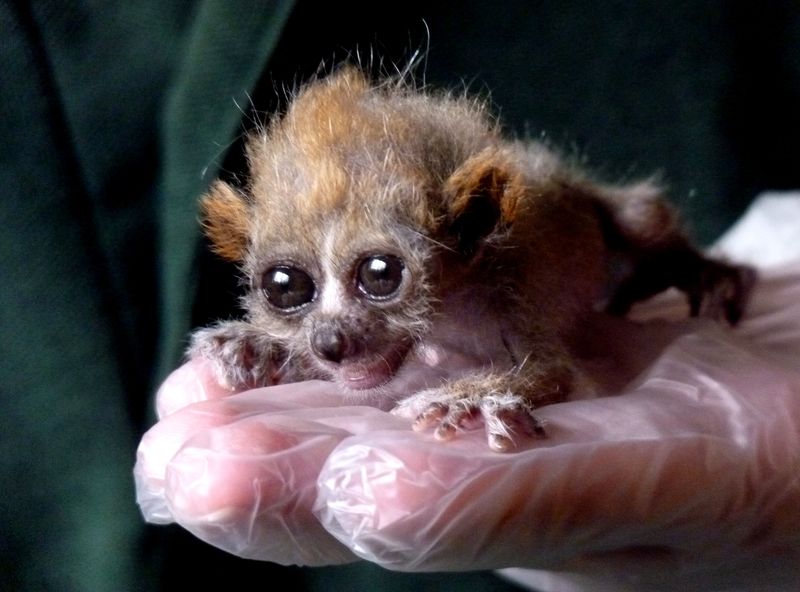 Dedicated keepers at Paignton Zoo in England are caring for a rare baby that weighed little more than a CD at birth.

The Pygmy Slow Loris – which weighed just 22 grams when it was born - was one of twins born to a first-time mother. One twin did not survive, and keepers stepped in to save the other when its mother abandoned it.

For the first night Head Mammal Keeper Craig Gilchrist slept in an office at the zoo, feeding the tiny youngster every couple of hours. It was given a milk replacer using a 1 milliliter syringe and a small rubber teat. 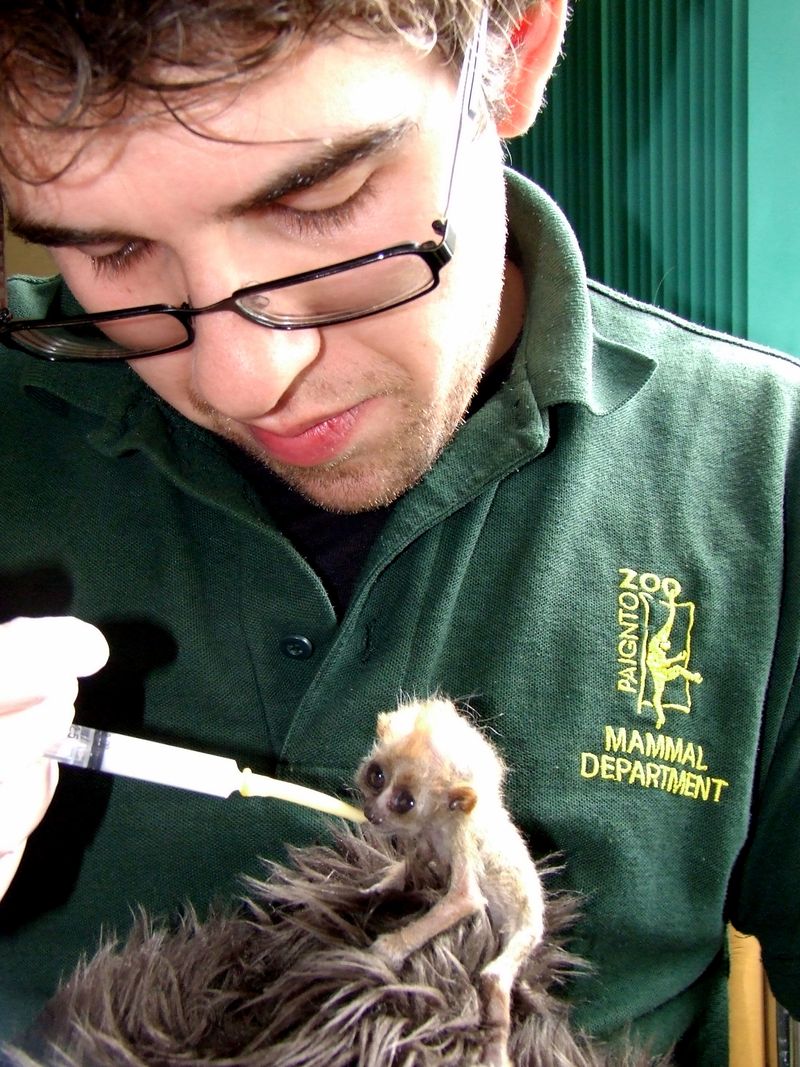 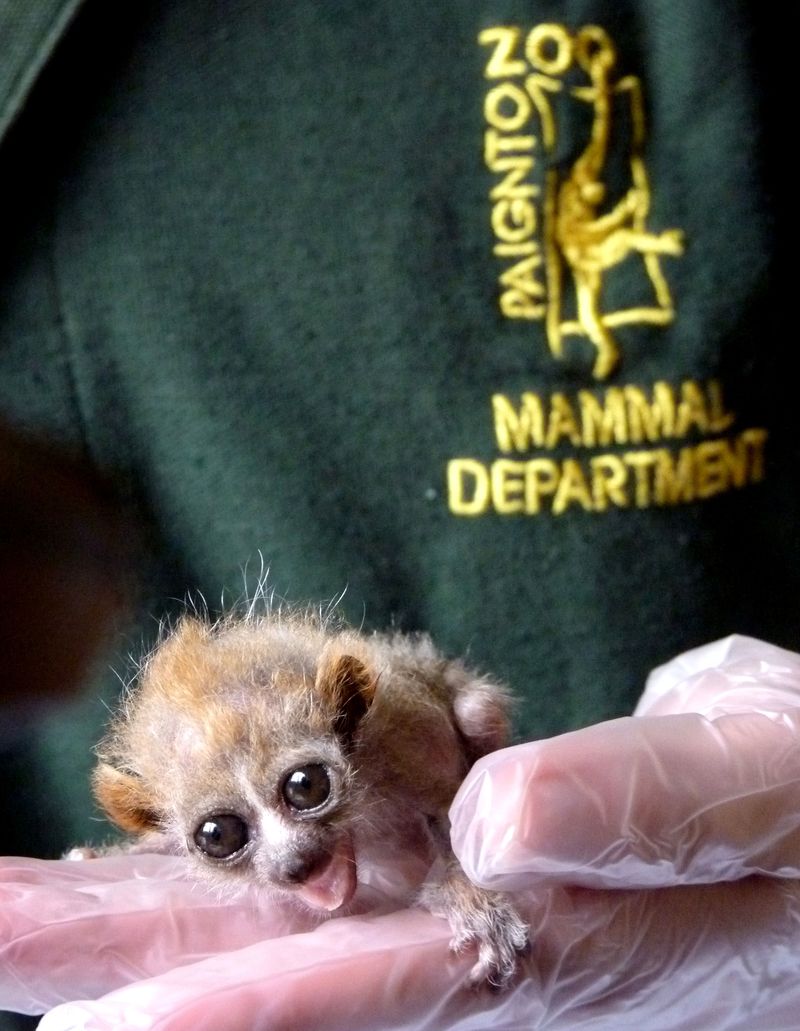 Now, at around a month old, it has gone from 22 grams - less than a single AA battery - to over 30 grams – the weight of a dessert spoon.

Keeper Lewis Rowden said, “You have to take care not to squirt the milk into the lungs – you have to let the baby suckle at its own rate. We are just moving on to feeding some solids now – small amounts of mashed boiled sweet potato.” 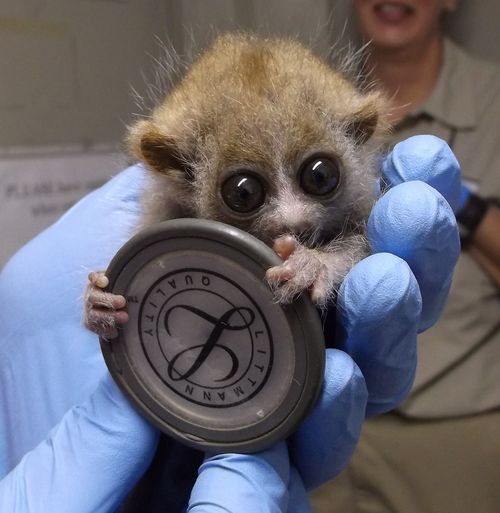 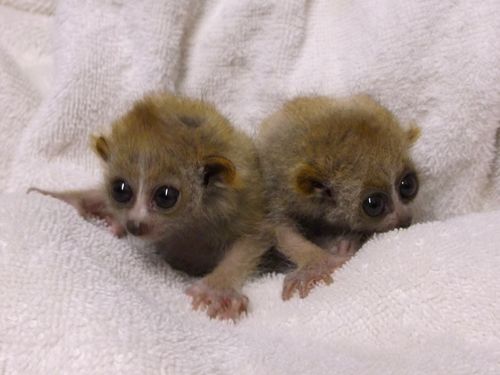 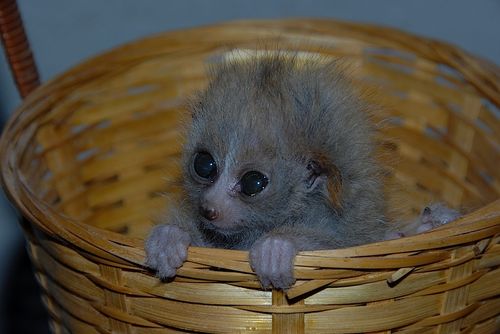 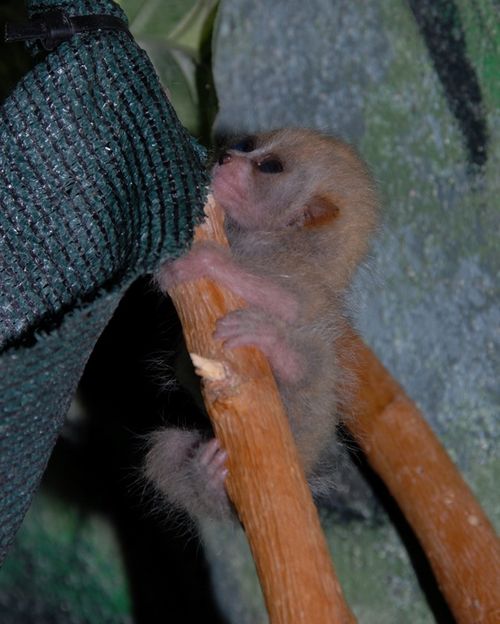 The vulnerable Pygmy Slow Loris is a nocturnal tree dweller that lives up to its name, moving in slow-motion while hunting prey. While they may look cute and cuddly (thermo-nuclearly cute if you ask us) this animal has a toxic bite, a very rare trait amongst mammals. Widespread poaching for the pet trade and use in traditional medicines sold in China has put a tremendous strain on the species in its native home of Southeast Asia. 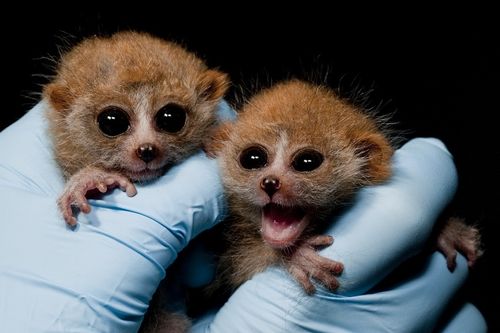 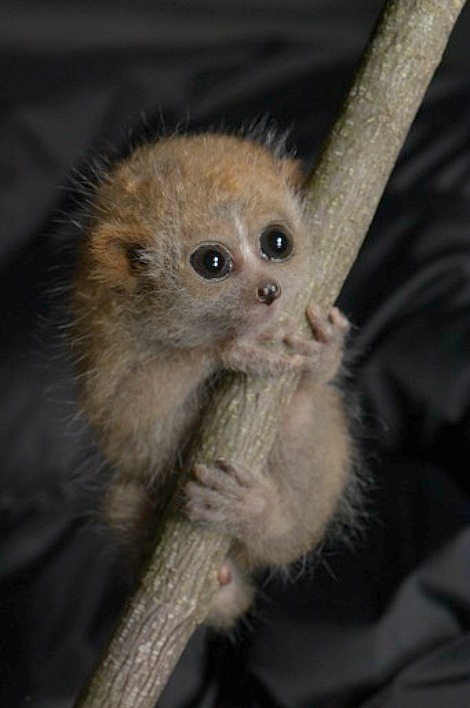 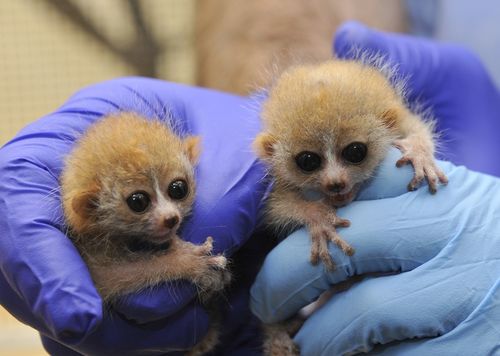 Many more exceptional photos after the jump 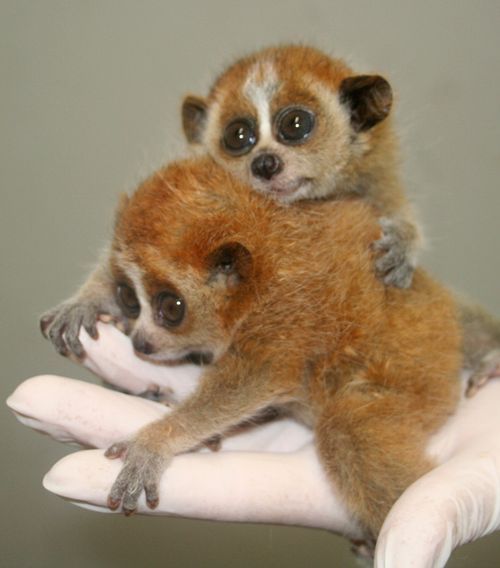 Moody Gardens guests get a special treat this summer: the chance to see two rare Pygmy Slow Loris offspring, born June 13, on exhibit in the Rainforests of the World Exhibit.

The addition of the second set of twins is a rare and valuable boost to the population of this primitive primate species called prosimians that are found in tropical forests of Laos, Vietnam, China and Cambodia. These arboreal (tree-living) primates were nearly extinct in Vietnam during the Vietnam War. Much of the forests where the loris lived were destroyed. After the Vietnam War, deforestation continued to be a threat. Due to numerous environmental dangers, the species is listed as “vulnerable” by United Nations Environment Programme World Conservation Monitoring Centre. 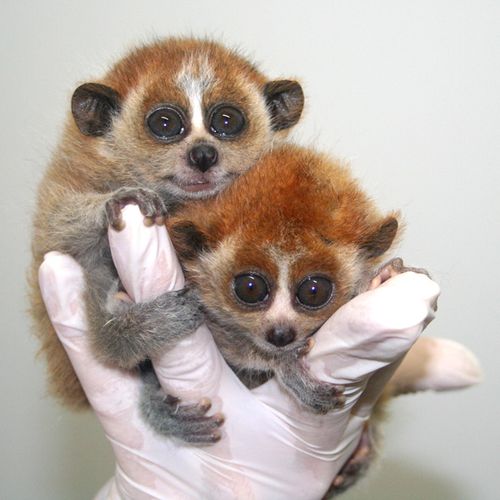 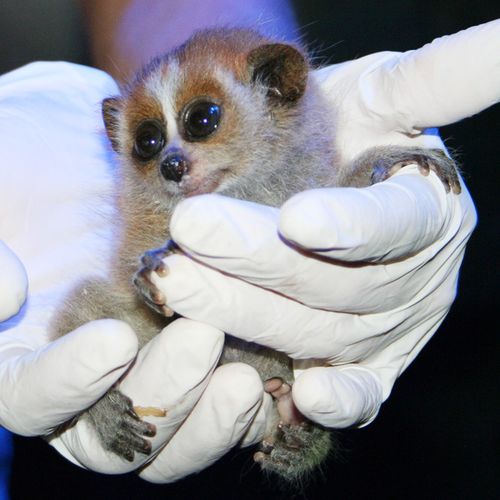 Softly-Softly into the World...

Quiet, slow and shy, Pottos spend their days sleeping in nooks high up in the trees and nights hunting for tasty fruits, tree sap and the occasional sleepy bug. Only three North American zoos exhibit Pottos and only the Cincinnati Zoo has successfully bred this rarely seen primitive primate. In some parts of Africa, the Potto is called a "Softly-Softly," however when the diminutive Potto is threatened, they will jab at enemies with pointy vertebrae on the back of their necks. Distantly related to apes and humans, they are more closely related to other lorises. These photos come to us courtesy of and copyright by the Cincinnati Enquirer. 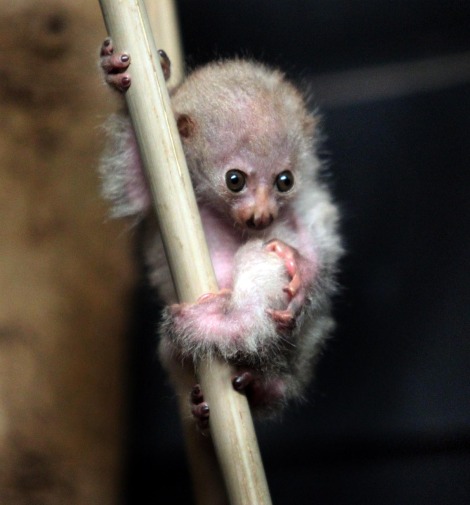 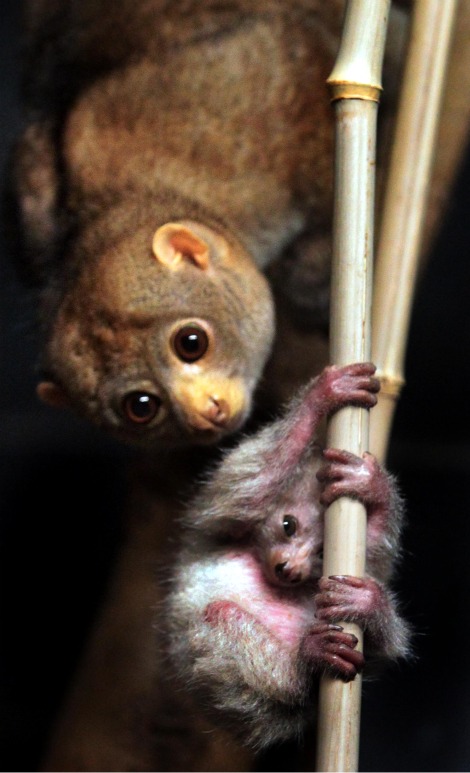 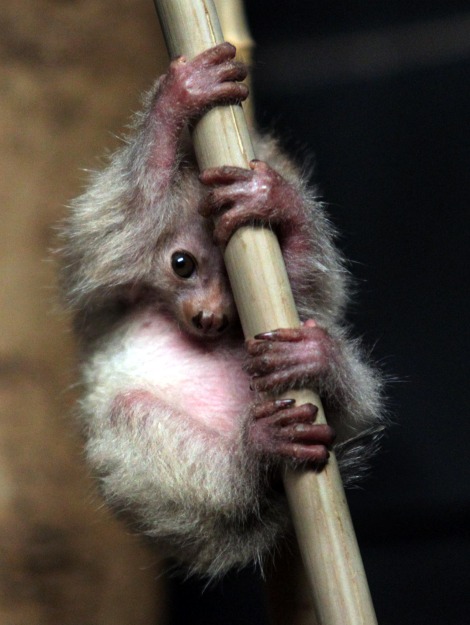 Moving slowly through the tree tops and weighing only a pound or less in adulthood, the pygmy slow loris lives up to its name. On March 22nd, Moody Gardens in Texas announced the rare birth of pygmy slow loris twins to mother Luyen and father Icarus. Moody Gardens tells us that “Luyen has been a very attentive and good mother to the twins. The babies stay attached to their mom for the majority of the day, taking plenty of opportunities to nurse.” In adulthood, these primitive primates, rely on their human-like hands and huge eyes to hunt tasty insects at night. 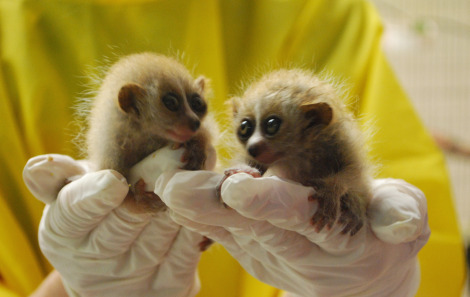 Below: The bashful female at just 15 days old. 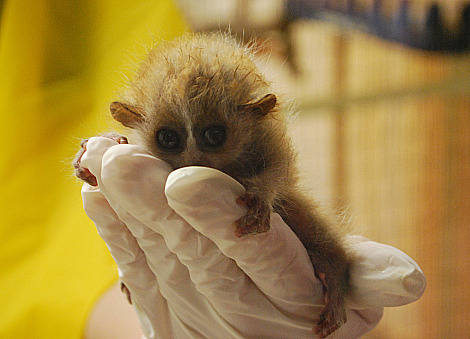 Below: The curious male, also at 15 days old. 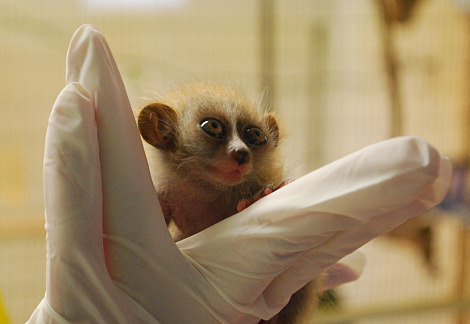 Below: Video of the twins that belongs in the adorability record books.