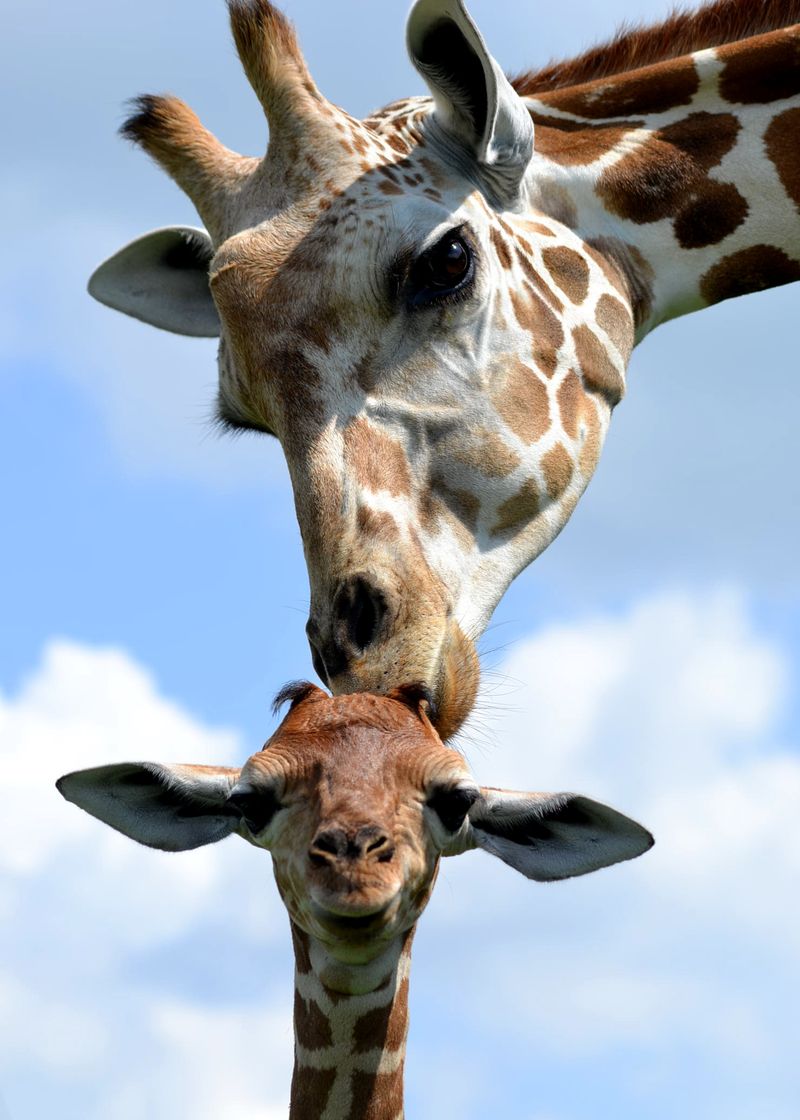 Nafari and his mom are segregated from the herd in the maternity pen to allow bonding time.  They are visible in the drive-through preserve (section 7, Hwange National Park) or from the Giraffe feeding exhibit at Lion Country Safari.  In nearly three months, they will join the remainder of the Giraffe herd at Lion Country Safari. Soon enough, Nafari will have younger companions as other female Giraffe are expected to give birth in the near future. 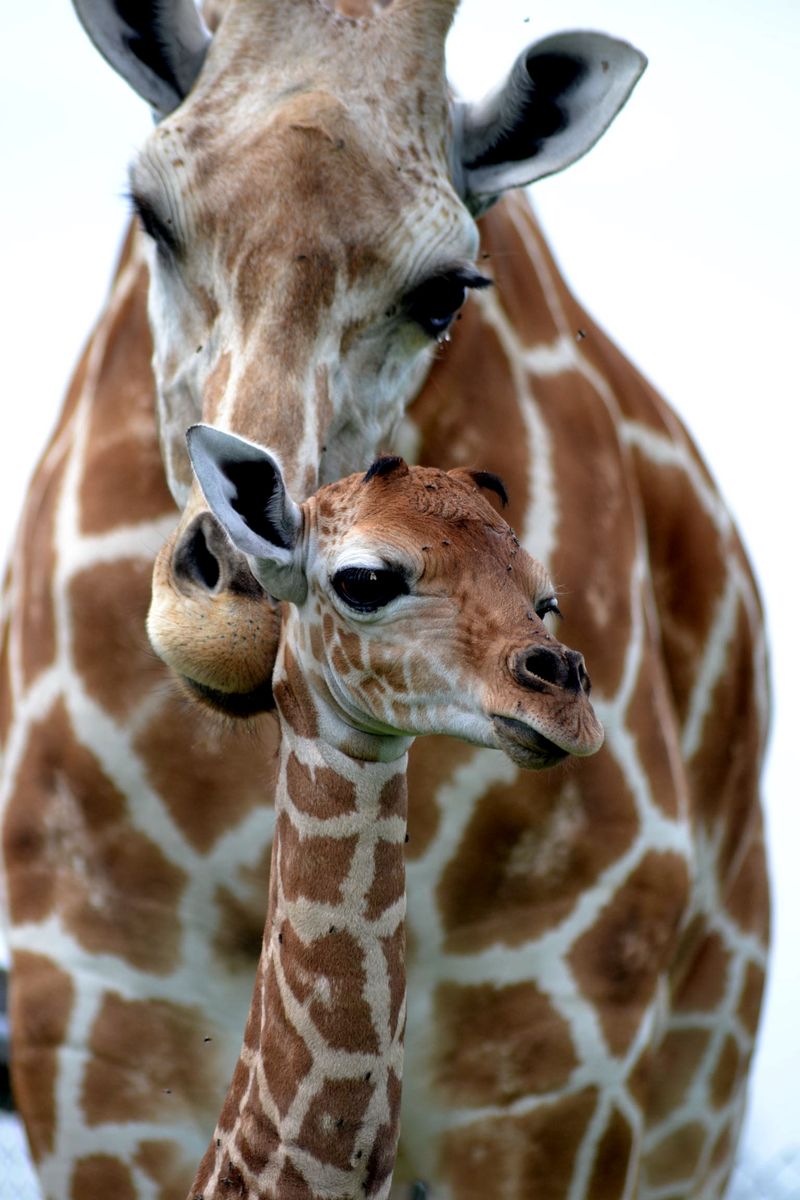 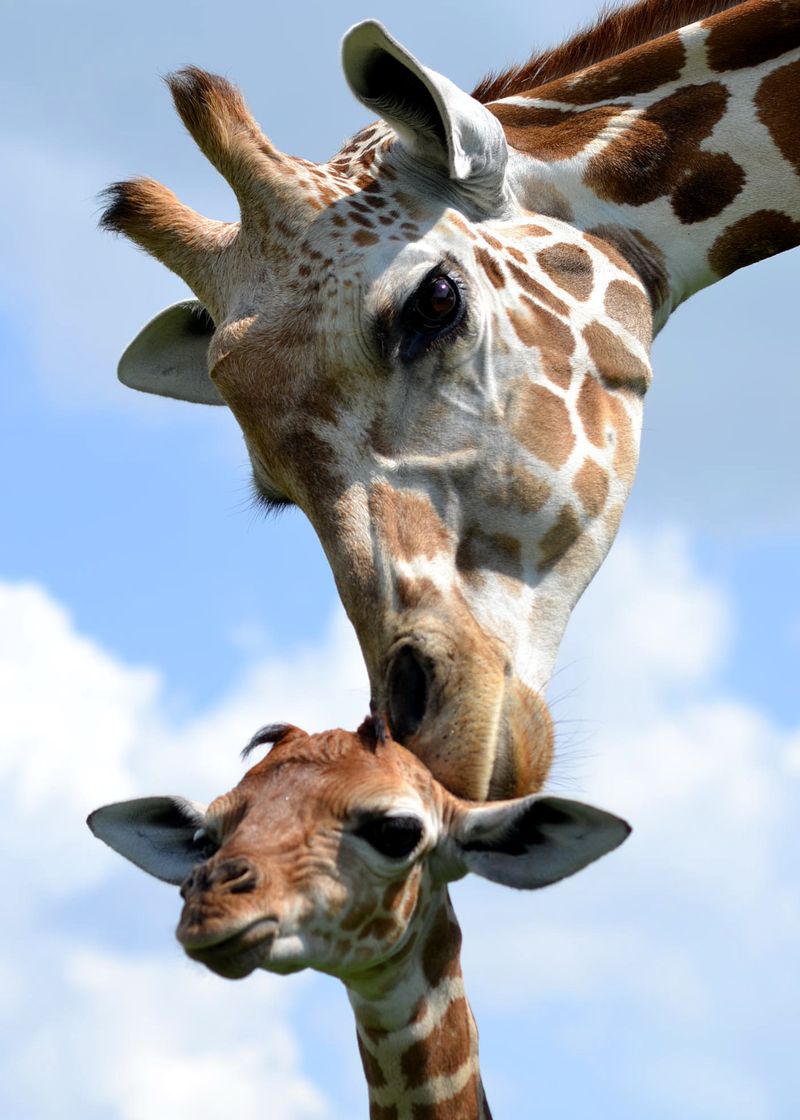 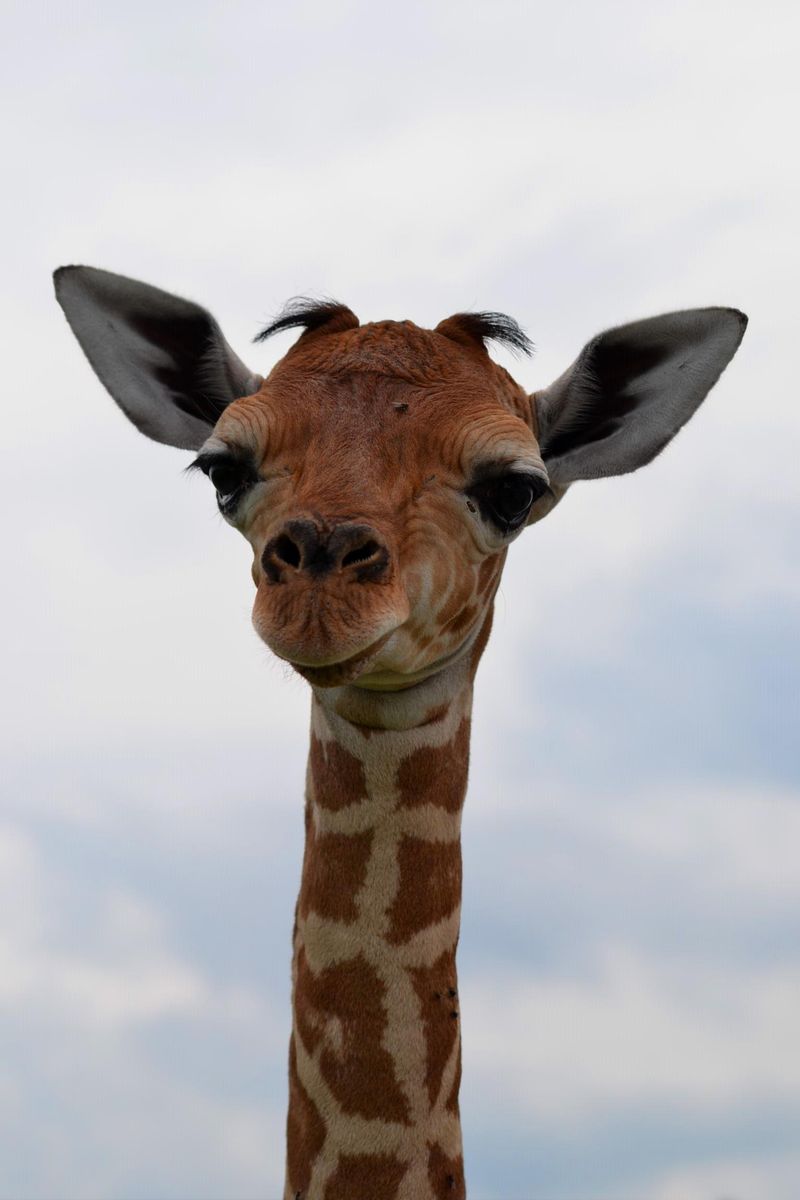 Female Giraffe reproduce year-round beginning at about four years of age. Their conception peak is usually during the rainy season and their gestation lasts approximately fifteen months. Giraffe calves are born while the mother is in a standing position and they drop to the ground head first. Life expectancy of a Giraffe is twenty-five years.

Lion Country Safari is dedicated to the captive breeding of a number of rare or endangered species and is proud to participate in the Association of Zoos and Aquariums (AZA) Species Survival Plan. This conservation program helps to ensure the survival of selected wildlife species.

Flamingo Chicks Named After US Presidents at Lion Country Safari 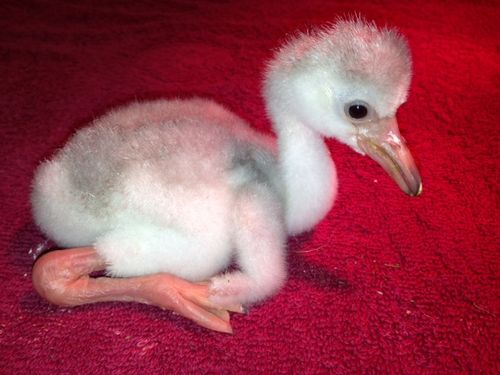 Lion Country Safari in Florida welcomed three new baby Flamingo chicks that hatched on July 1, 2, and 4. Since safari staff flew up to Washington's Smithsonian National Zoo to pick up the eggs, and the hatchings occurred on and just before Independence Day, keepers are naming them all after United States Presidents. So far they have named hatchlings Washington, Lincoln, and Truman.

Flamingo chicks grow quickly, their long spindly legs shooting up so fast that it's a trick to strengthen them enough to hold up the birds' gray fuzzy bodies. So parents (or keepers, if they are being hand-raised) take them for daily walks and swims to become strong. It is quite a sight to see a group of little Flamingo chicks on a walk, flapping their little wings and wobbling to and fro. These birds are strong though rare swimmers and powerful fliers, even though they're most often seen just wading. 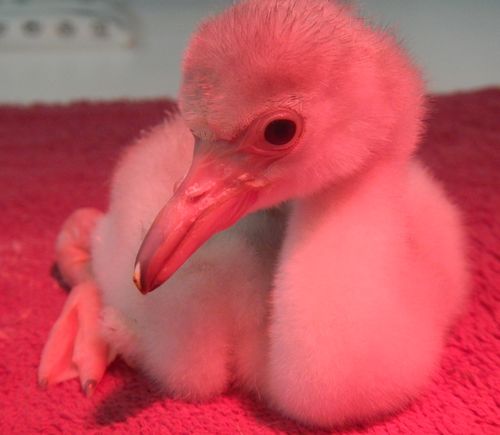 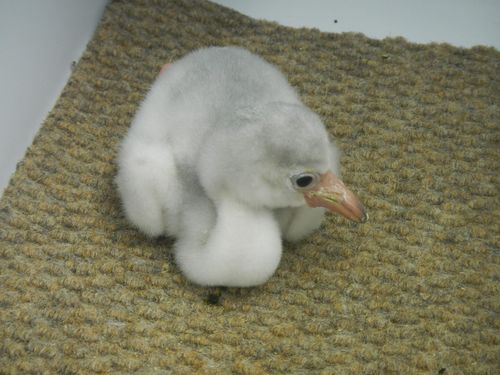 A chick's bill is small and straight, but will develop the distinct "break" curve after a few months. Flamingo chicks are born gray or white and take up to three years to reach their mature pink, orange, or red plumage; the color is caused by carotenoid pigments in their food, and a flamingo's diet includes shrimp, plankton, algae, and crustaceans.

Say hello to one of the wobbly hatchlings, seen in the video below: 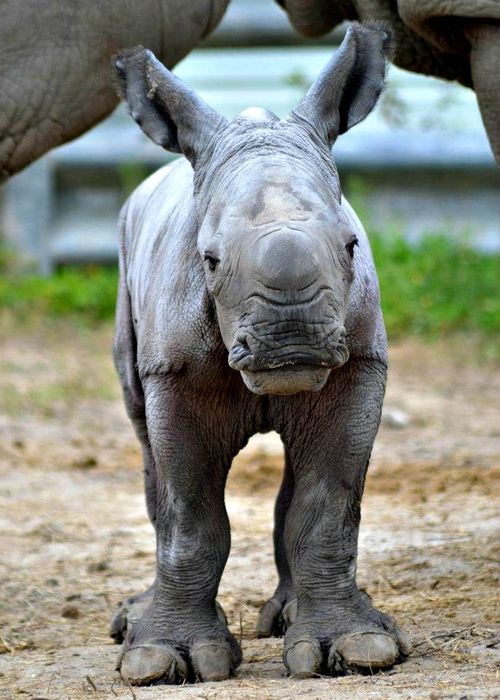 The biggest addition at Florida’s Lion Country Safari is just a week old:  a 155-pound female Southern White Rhinoceros calf is now on display in the Rhino maternity area of the drive-through safari.

Born on April 6, 2013 to mom Bloom after 16 months of gestation, the baby has been named Anna, after Rhino conservationist Anna Merz, who passed away on April 4. Merz was a founder of The Lewa Conservancy, which was established to conserve Rhinos in Kenya and has since grown to protect many species of African birds and mammals. 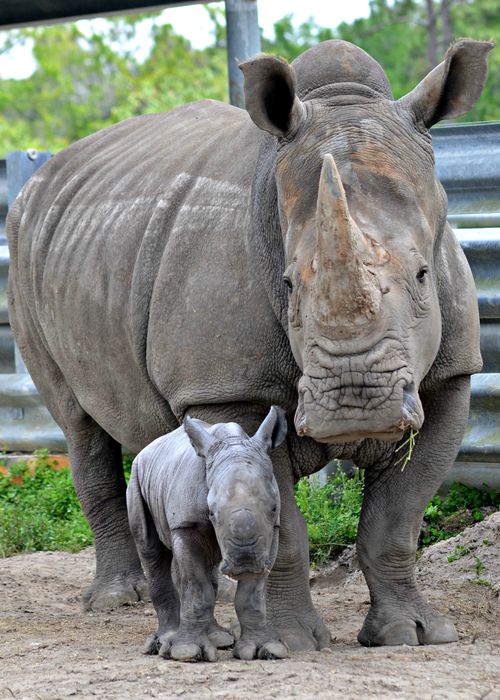 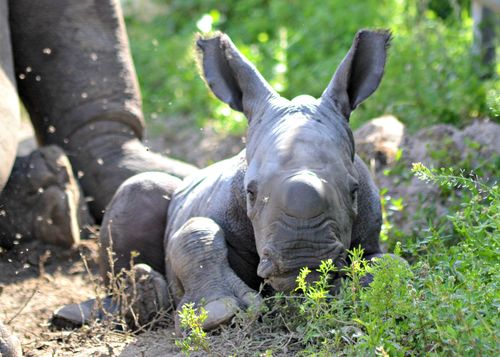 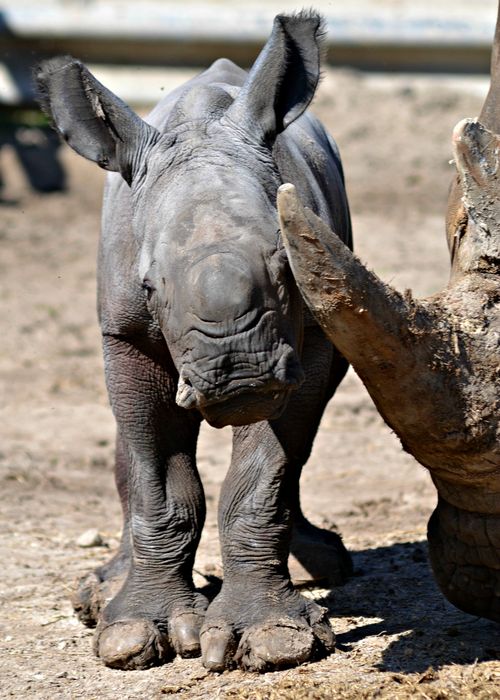 Lion Country Safari is home to 14 Rhinos and has produced 33 Rhino offspring since 1979 as a participant in the Association of Zoos & Aquariums’ Species Survival Plan.

Of the five extant species of Rhinos (White, Black, Indian, Sumatran and Javan) the White Rhino is the most abundant, with approximately 20,150 alive today.  However, all five Rhino species are in peril.  The most significant threat to Rhinos is the trade in Rhino horn, which is used for traditional Asian medicine and as dagger handles in some Middle Eastern countries.  Despite international protections and treaties, demand for Rhino horn continues to escalate.

See more photos of Anna below the fold. 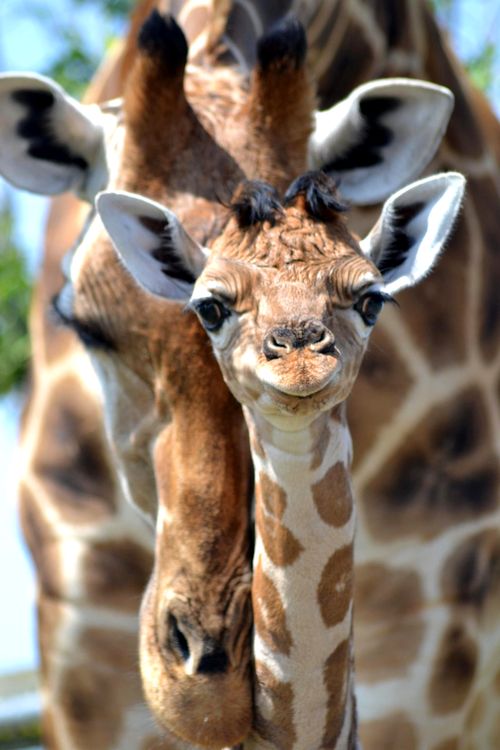 Willow and her mom, both Rothschild Giraffes, are separated from the herd in a maternity pen to allow bonding time. They will join the rest of the herd in about three months. 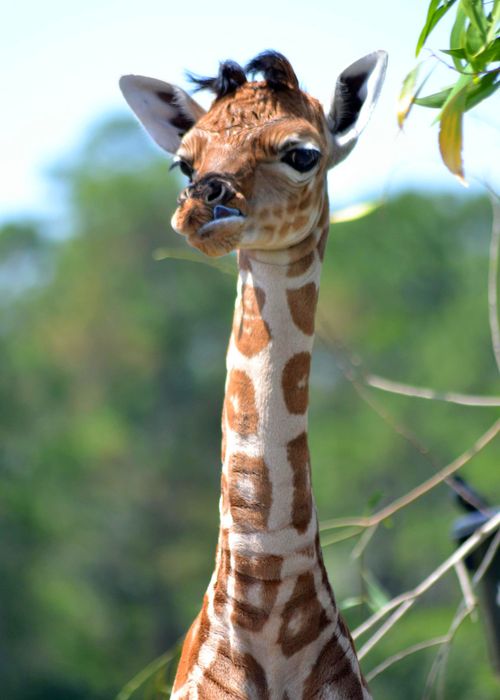 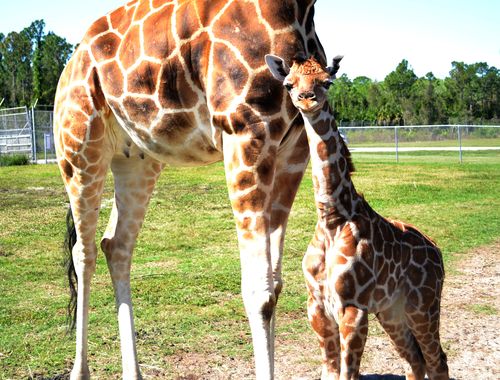 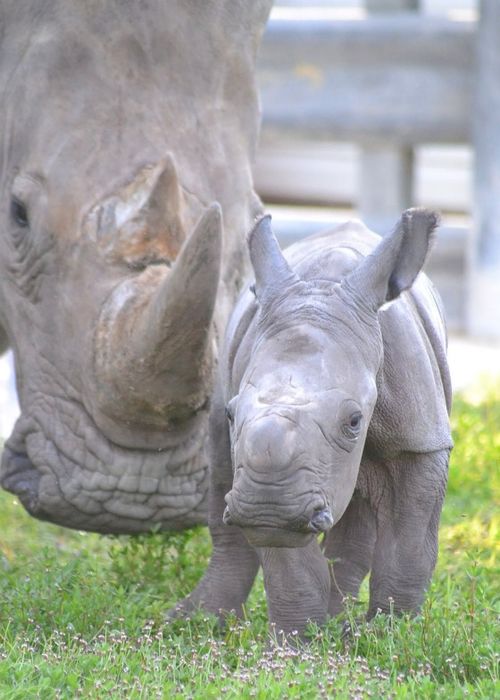 Meet Laini, Lion Country Safari's newest "little" lady, weighing in at a healthy 50 lbs. Born April 28th after a 16 month gestation, this Southern White Rhinoceros calf will remain with mom in the rhino calving pen for about three months, giving the pair time to bond. After that, they will roam freely in Lion Country Safari’s Hwange National Park with the other White Rhinos, including dad Ronnie.

Notice the "insert horn here" nub on Laini in the picture below. Her horn will grow between 1-3 inches per year so it will take a while to get to a formidable size. 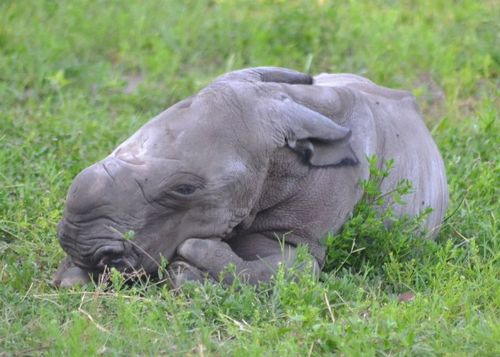 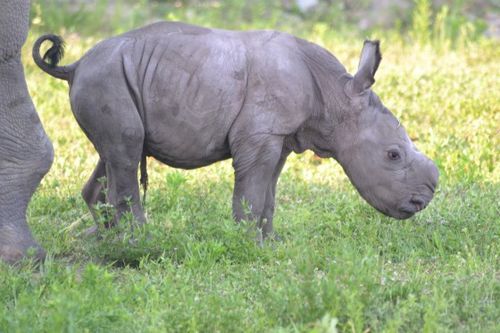 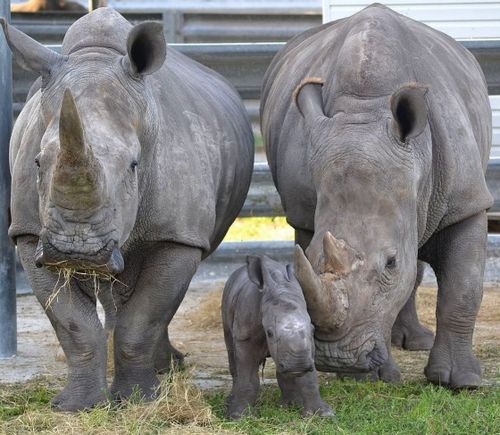 Laini means fragile/endangered in Swahili, and the Southern White Rhinoceros is indeed threatened by poaching and habitat destruction. Since 1979, Lion Country Safari has had 32 rhino offspring. Little Laini was born as part of the White Rhinoceros Species Survival Plan (SSP), a program of the American Zoo and Aquarium Association (AZA).

When mom has a 2 foot long horn on the end of her snout, one might think it would impede nuzzling. Not so! Born Dec. 9th at Lion Country Safari, after 16 months of gestation (!), baby white rhino Jazi and mom Taraja demonstrate a good deal of muzzle to muzzle bonding. 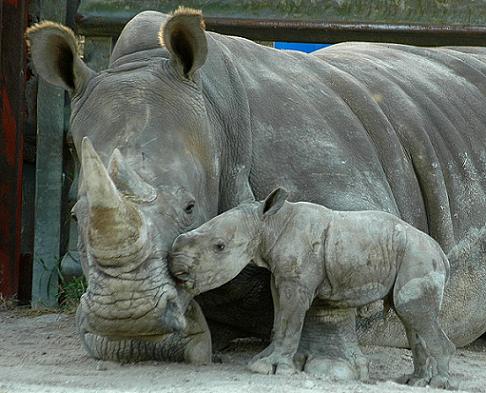 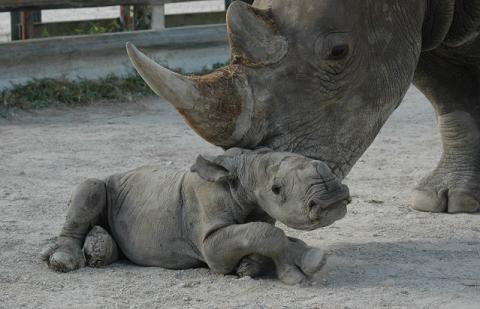 And sometimes muzzle to rump. 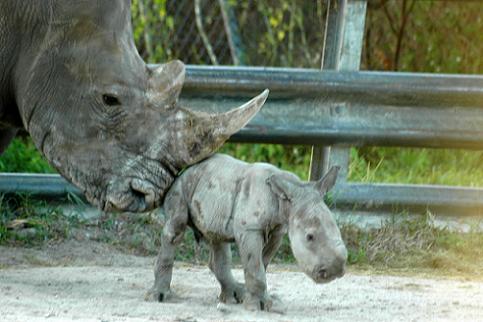 These adorable "little" guys were born in November at Lion Country Safari in West Palm Beach, Florida. Little Kenya and Jumanji clearly both have doting mothers. 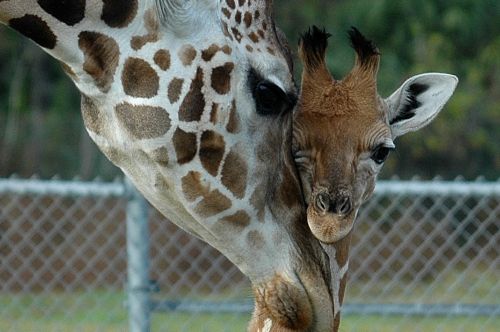 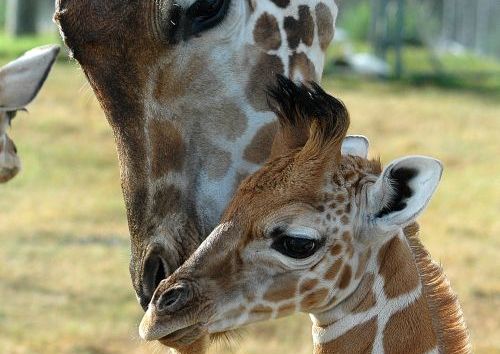 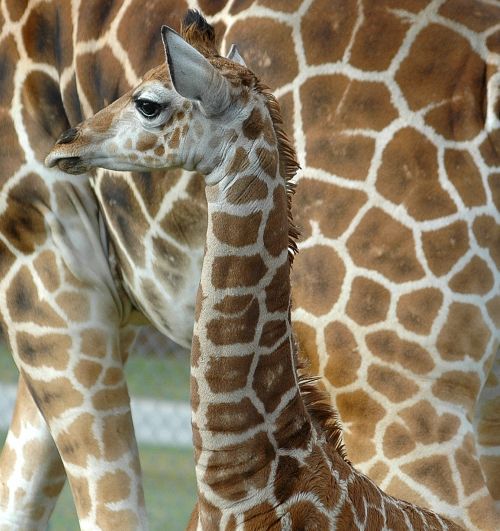