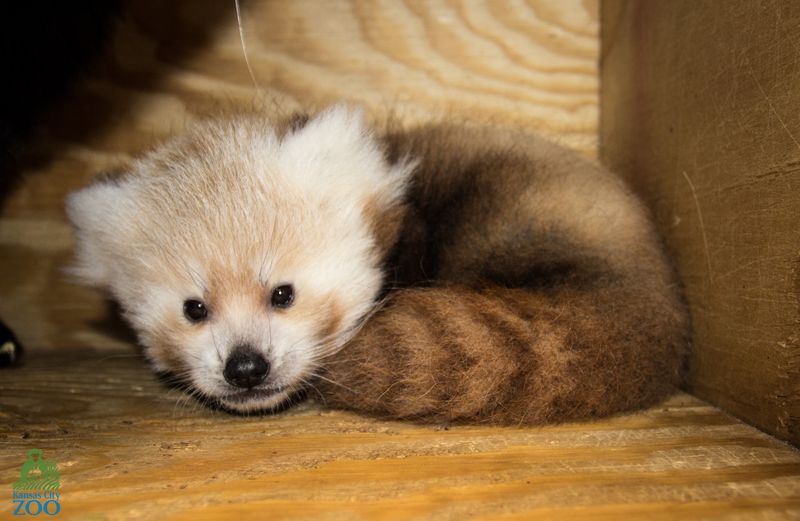 A Red Panda Cub, at the Kansas City Zoo, recently made his public debut. Born June 17th, the five month old male, named ‘Fei Jai’ (fay-jay), has been behind the scenes since birth, staying close to mom, ‘Gaila’. 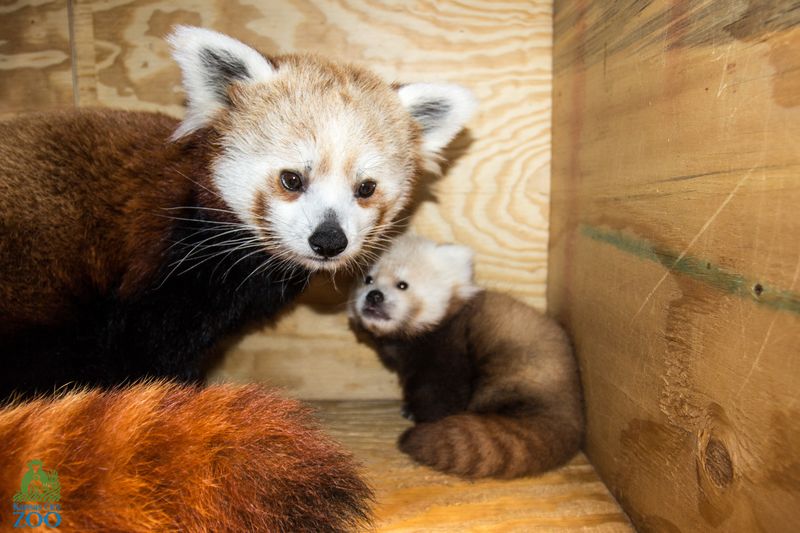 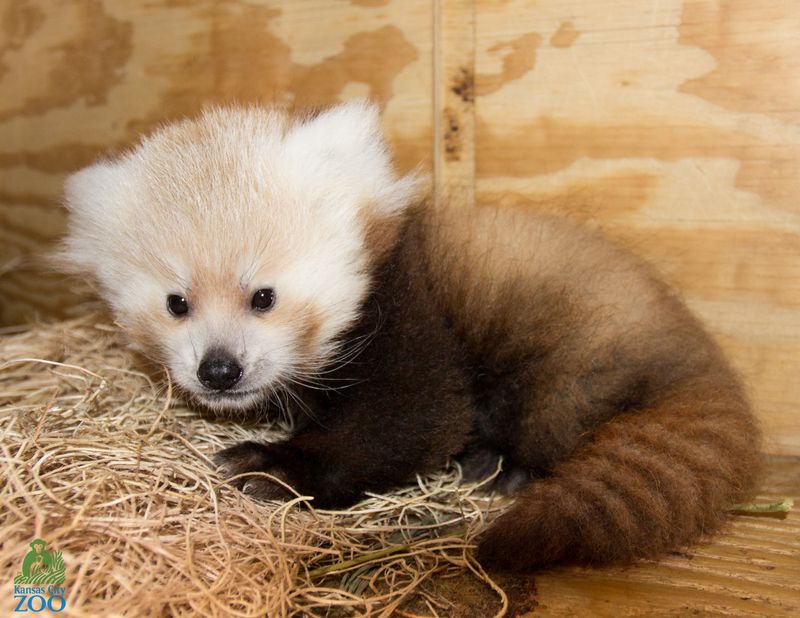 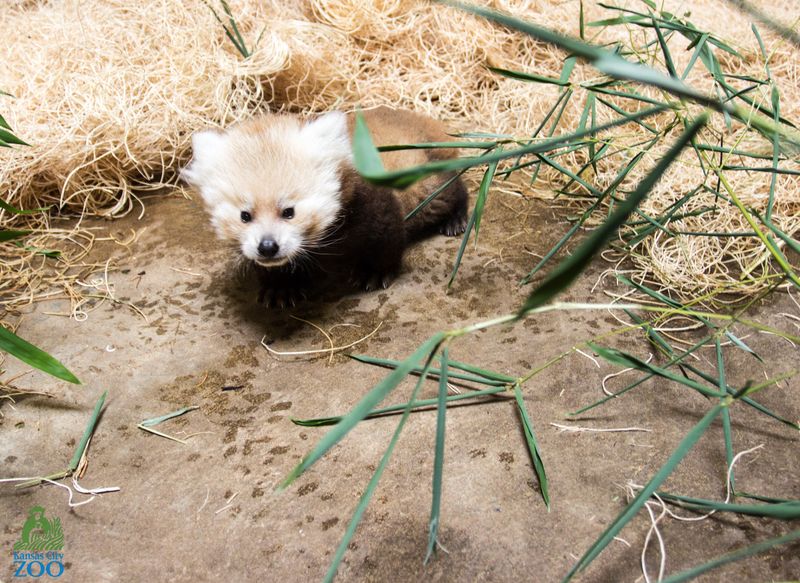 Fei Jai currently weighs a little over 4 pounds, but considering his birth weight of 4 ounces, he is healthy and developing, as expected. Fei Jei will remain close to his mother until the next mating season begins, and he will reach adult size at about 12 months of age. Like his mother, Gaila, he will be about the size of a house cat, when fully grown.

The curious male cub has just started exploring his exhibit, and he has begun eating the panda staple food, bamboo. Red Pandas primarily eat bamboo leaves and fresh shoots, but they are also known to enjoy berries, blossoms, bird eggs, and small leaves of various other plants. Like all Red Pandas, Fei Jai has a small, bony projection on his wrist that helps him grip bamboo stalks. Giant Pandas also have this thumb-like adaptation.

In 2008, it was determined that approximately 10,000 individual Red Pandas were found globally. Since the population is expected to decline in the future, the Red Panda is currently classified as “Vulnerable” on the IUCN Red List of Threatened Species, and conservation efforts are in place. 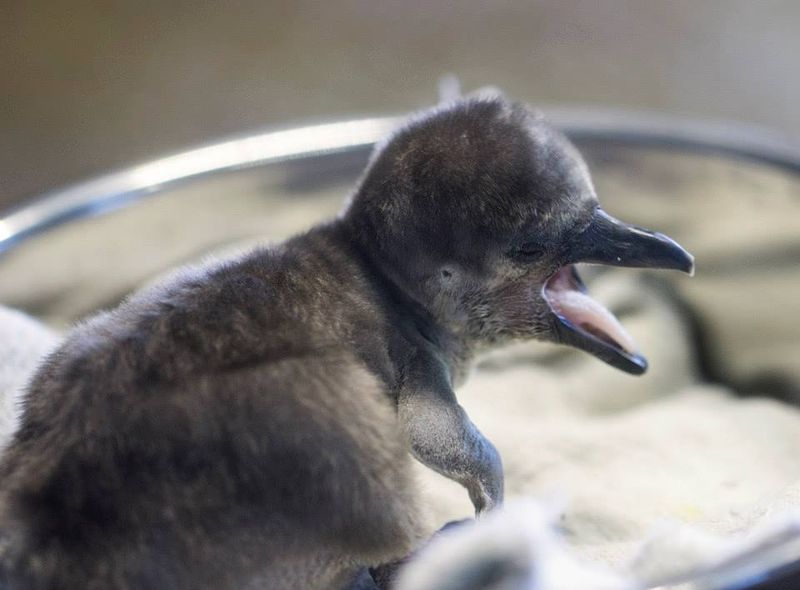 The Kansas City Zoo welcomed its first-ever Humbodlt Penguin chick on May 25.  Covered with soft gray down feathers, the chick is being closely watched and fed by both Humboldt Penguin parents. 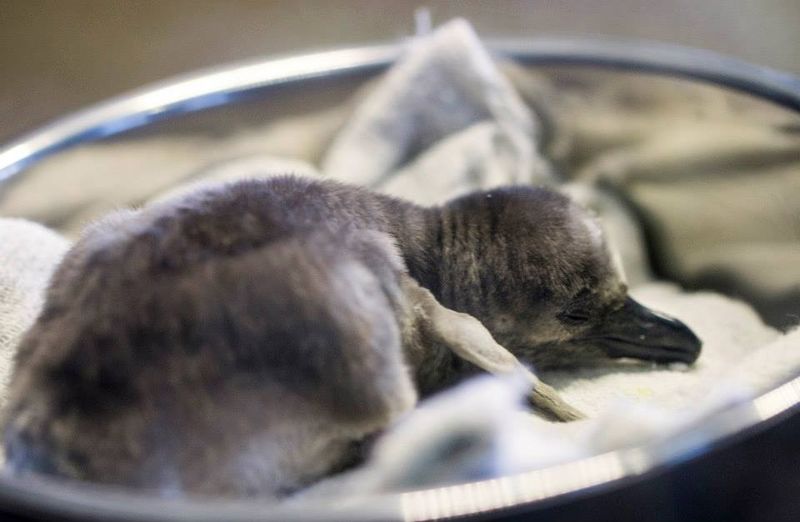 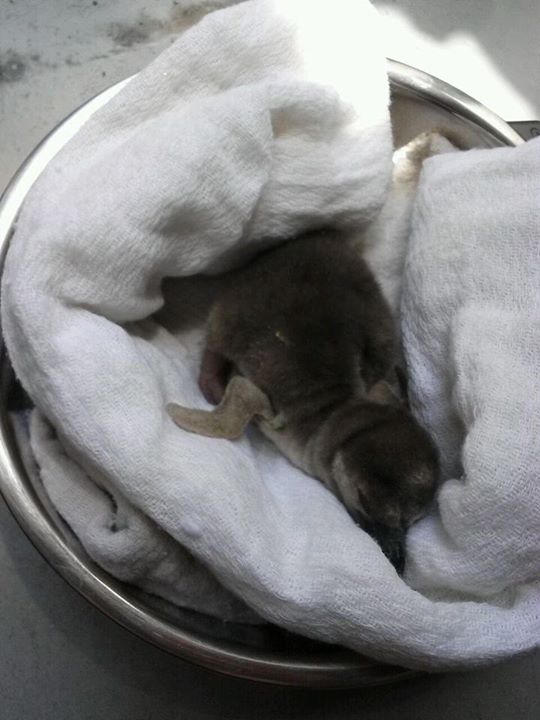 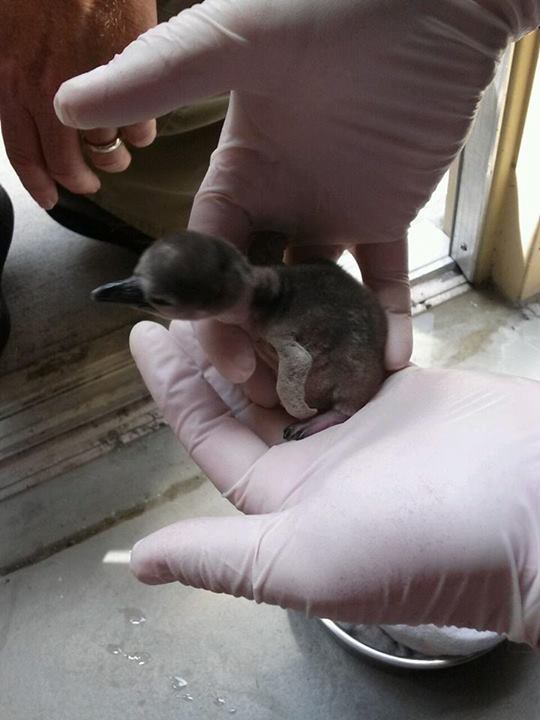 The zoo’s staff notes that the location of the nest – right up against the glass in the Penguin exhibit – makes the hatchling very easy to observe.  It will be several weeks before the chick is able to explore the exhibit on its own.

Humboldt Penguins are native to the Pacific coasts of Peru and Chile in South America.   The birds build their nests along the rocky coastline and venture out to sea to catch fish in the chilly Humboldt current for which they are named.

These Penguins are listed as Vulnerable by the International Union for Conservation of Nature.  Many Penguins are displaced when guano - the accumulated droppings of millions of birds over hundreds of years – is mined as a fertilizer.  Climate change also affects these Penguins in a negative way.  When ocean temperatures rise, the fish on which the Penguins feed move to colder currents.  Sometimes the fish move so far off shore that the Penguins become exhausted trying to locate food. 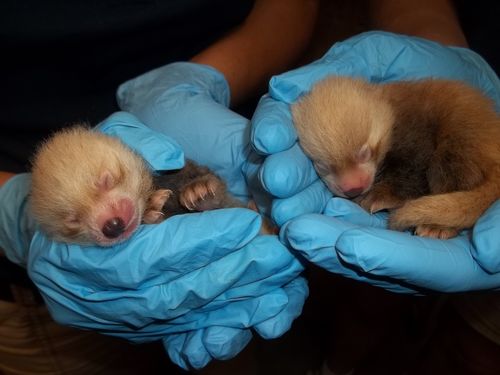 Two Red Panda cubs were born on June 26 at the Kansas City Zoo. The two male cubs weighed four ounces each just one day after birth. At their two-week checkup, they had more than doubled in size!

Dad Fagan and mom Gaila are keeping their cubs close for warmth and feeding. Youngsters generally stay in the nest for about 90 days. The zoo’s Red Pandas live in an air-conditioned indoor exhibit in the summer, then move outdoors to enjoy the cool winter weather. As Himalayan natives, Red Pandas can tolerate very cold temperatures. Zoo guests can see the male twins on a TV monitor at the exhibit.

Two-year-old Gaila came to Kansas City from the National Zoo at age one. It was recommended by the Red Panda Species Survival Plan that Gaila breed with 13-year-old Fagan. Fagan has been at the Kansas City Zoo for 12 years and fathered one cub in 2006. Cubs are extremely important to the captive population of Red Pandas, because there are only 116 currently in captivity in the United States. 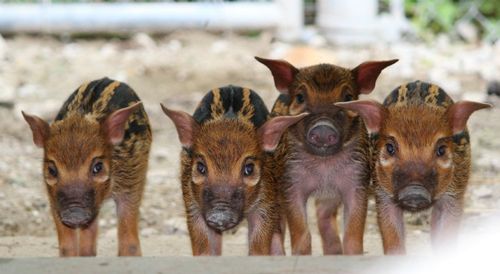 Little black, cream and red watermelons with wiry pink tails, Spock ears and button snouts -- that just about describes these four new Red River Hog piglets. Born at the Kansas City Zoo on April 23, they made their public debut on May 10, at just 17 days old.

Weighing around 2 pounds (.90 kilos) at birth, they will nurse from mom for at least three months. Pig milk has nearly double the fat of cow or human milk so they will grow quickly; Mom Binti and Dad Runty weigh a healthy 150 pounds (68 kilos) each.

Binti has proven to be an ideal mom, at first by making her own nest from grasses and vegetation and now by nursing and tending to the every need of her babies. Not to exclude Dad from caregiving kudos, Runty is already quick to come to the defense of the piglets and keep them within eyesight of Binti. Rounding them up and keeping a close eye on these four isn’t easy. 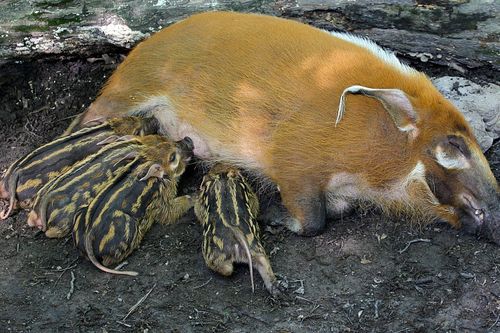 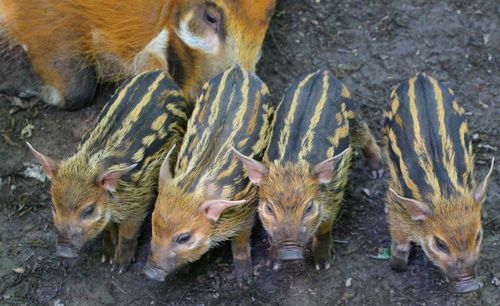 Brown Stripes for a Baby Zebra

A Grant’s Zebra was born Saturday, July 31 at the Kansas City Zoo to Mom, Jet, and Dad, Zanthus. She has brown stripes instead of black and weighed in at 79 pounds. Brown stripes are natural among newborn zebras; they will turn to black when she is between 9 and 18 months old. Every zebra has a different pattern of stripes. The stripes help them avoid predator attacks as they make it hard for a zebra hungry hunter to single out one animal from a fleeing herd. 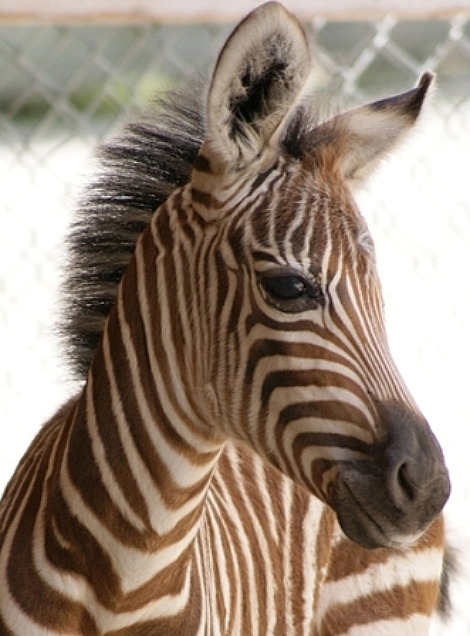 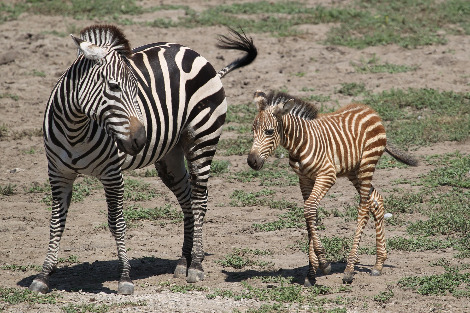 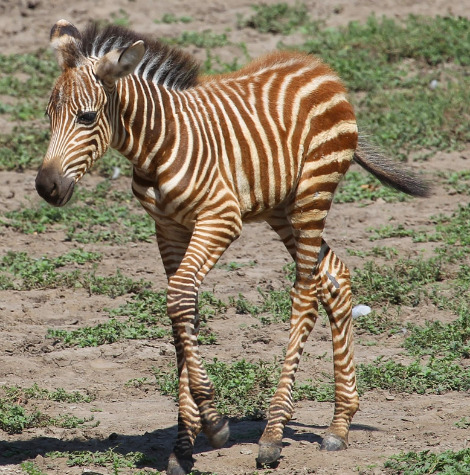 Orphan Orangutan Smiles for the Camera

Two weeks ago we brought you pictures of baby Kali at the Kansas City Zoo. The little female orangutan had been abandoned by her mother but found a happy life with new surrogate mom "Jill." Today we check back in on baby Kali who is reportedly doing great. 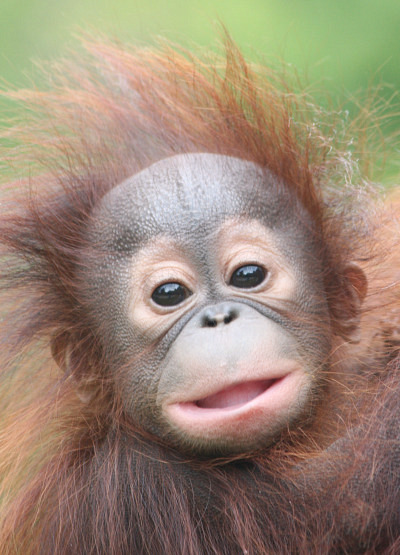 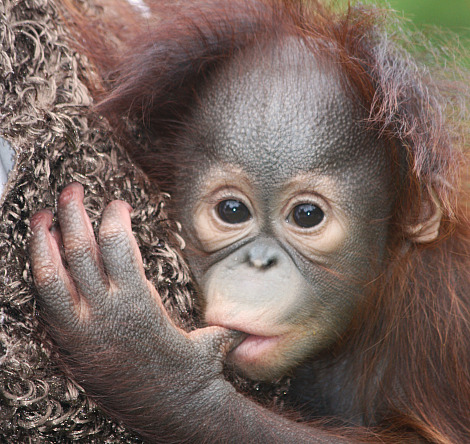 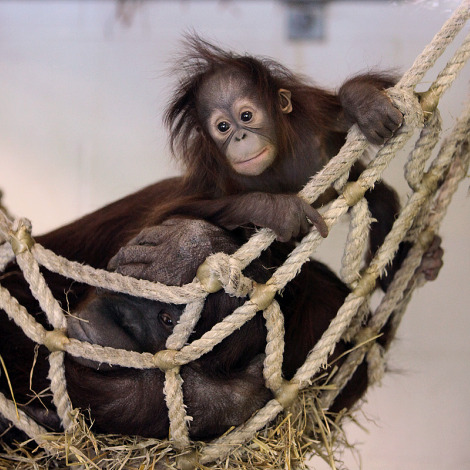 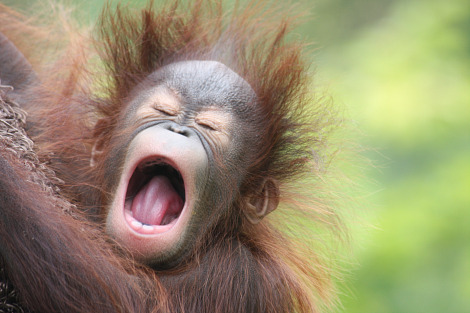 Baby's Got A New Mom!

Kalijon, a 5-month old baby orangutan, is now in the care of a foster mother at the Kansas City Zoo after five months of being nurtured around the clock by humans. Step mom Jill has proven to be a very attentive surrogate. 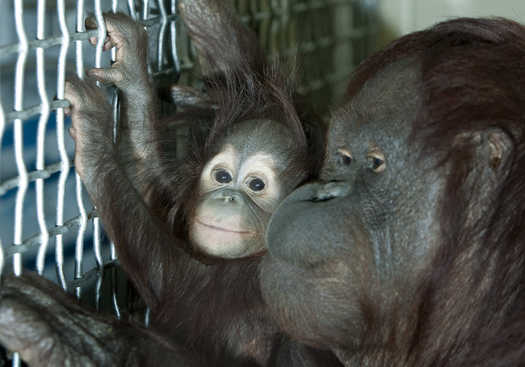 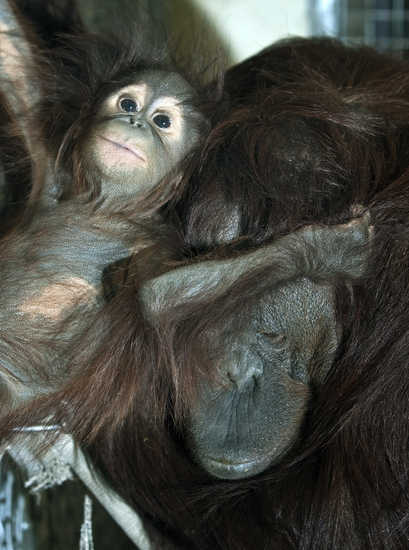 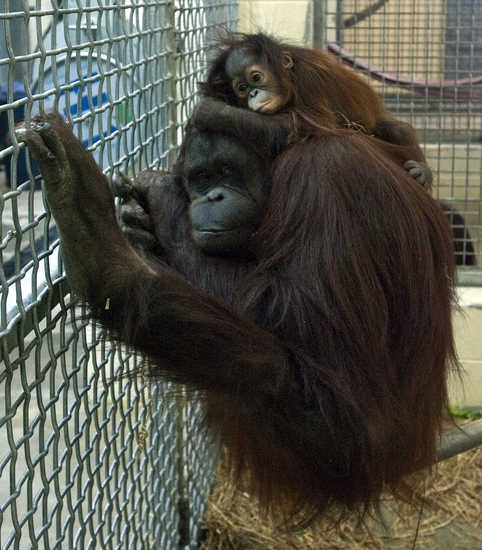