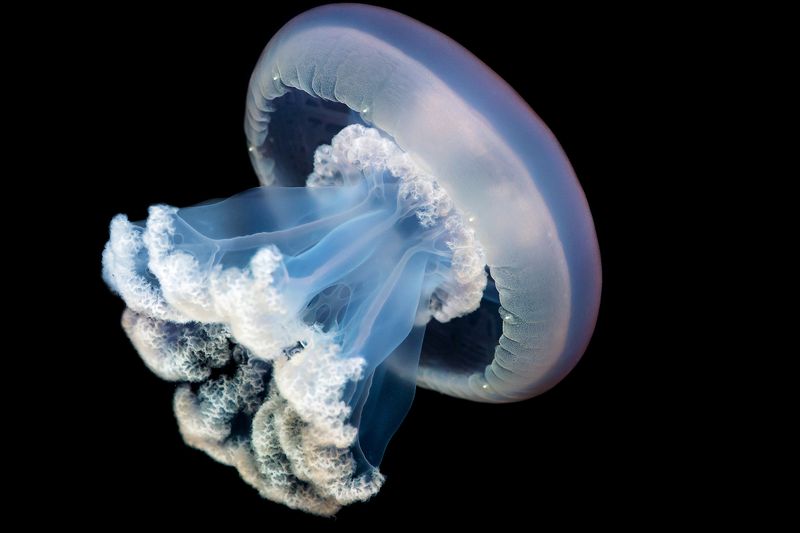 Zoo Vienna has now successfully bred this rare sea dweller for the first time in captivity. The baby jellyfish are about 4 centimeter tall and are now on exhibit in the Zoo’s Aquarium. 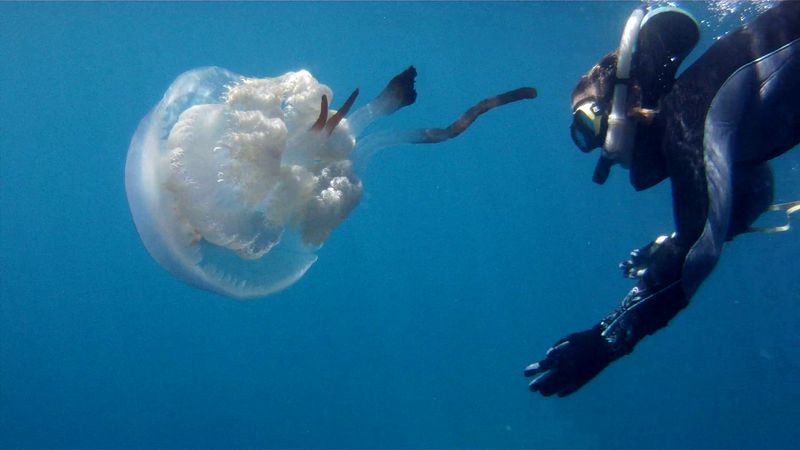 “The Giant Jellyfish was first discovered in the Western Mediterranean Sea in 1827. It is such a rare species that some scientists even doubted its existence. During the last couple of years, some specimens were stranded on the beaches of Morocco and Spain, and it could finally be proven that Rhizostoma luteum does indeed exist,” said Dagmar Schratter, director of Zoo Vienna.

The story behind this breeding success is as spectacular as the jellyfish itself. Schratter continued, “The marine researcher Karen Kienberger from Jellyfish Research, South Spain, collected an adult Giant Jellyfish in the coastal waters of South Spain for her scientific research. At the laboratory, she discovered that the jellyfish was sexually mature and collected planula larvae which she sent to Zoo Vienna.”

Almost nothing is known about this jellyfish. It was a real challenge even for the jellyfish experts at Zoo Vienna to successfully breed this species. But they were successful and raised 30 baby jellyfish from the planula to the polyp--- and finally to the jellyfish.

The Zoo successfully took photos of all developmental stages and collected important data, which will be forwarded to Kienberger for further collaborative research.

French naturalists, Quoy and Gaimard, first described the Giant Jellyfish, Rhizostoma luteum, in 1827. Since its discovery, it has only been mentioned in scientific literature six times due to its rarity. Some researchers even doubted its existence until the recent discovery of specimens off the coast of Southern Spain. 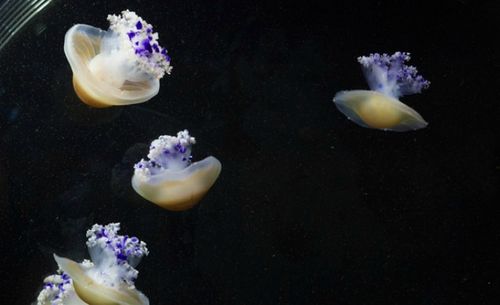 Since the summer of 2011, Switzerland's Zoo Basel has been working behind the scenes with their new breeding vivarium equipment called "Plankton Kreisel". It ensures that baby jellyfish float like the ocean - in a continuous flow.They are so delicate that they could not withstand the corners found in normal tanks. Thanks to a new method of breeding and rearing, they are thriving.

Jellyfish in the vivarium have different feeding rhythms and the Zoo will fluctuate the temperatures within it to stimulate reproduction. This system was discovered by accident when, in December 1987, a cooling system in the vivarium went out for two days. Surprisingly, the jellyfish began to multiply! Now It takes a lot of work and knowledge to employ this new method for breeding them, but it has become a successful effort.

Jellyfish are composed of two different life forms: affixed (polyps about 2 mm or .078 inches small) and free-swimming medusa, the actual "jellyfish". The polyps produce buds within the fluctuating environmental conditions, which detach with time and in the wild become jellies freely floating in the sea. Those jellyfish will in turn become sexually mature after a few months and then produce eggs and sperm.

Thanks to these new methods, jellies can again be seen on ehxibit at the Zoo in all their other-worldly beauty. 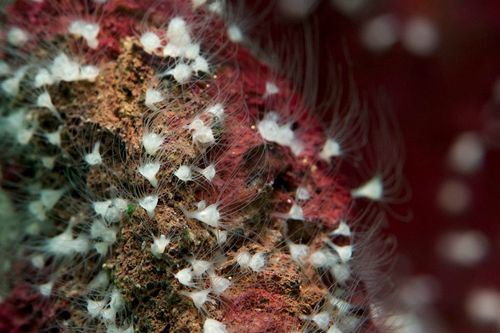 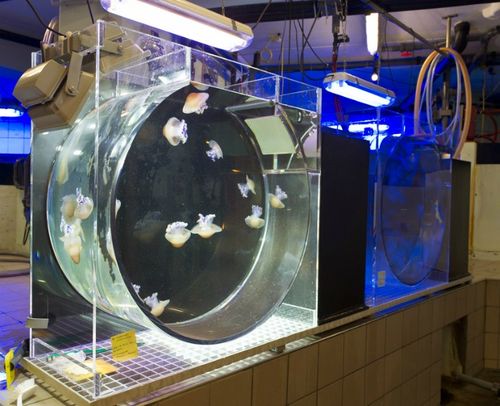 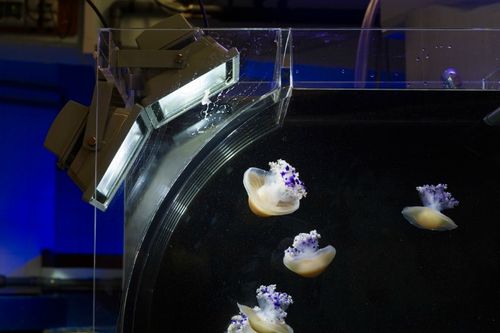 Arrivals from Another World at Zoo Basel

Zoo Basel has successfully bred Fried Egg Jellyfish, a species of jellyfish found in the Mediterranean, Aegean, and Adriatic Seas. The species is particularly challenging to breed because they require live plankton to eat and plenty of sunlight to survive. These young jellies were kept behind the scenes in a special breeding tank which imitated conditions in their natural environment. They are now on exhibit at Zoo Basel's Aquarium. Unlike most jellyfish, this species is capable of propelling itself through the water and do not depend on currents to carry them. 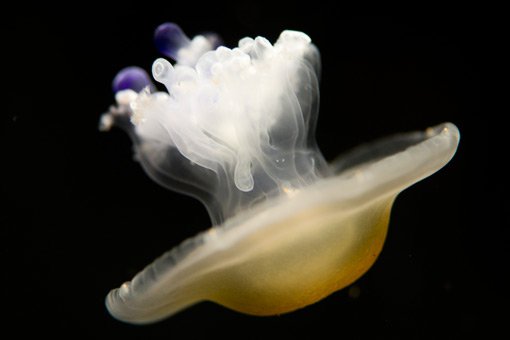 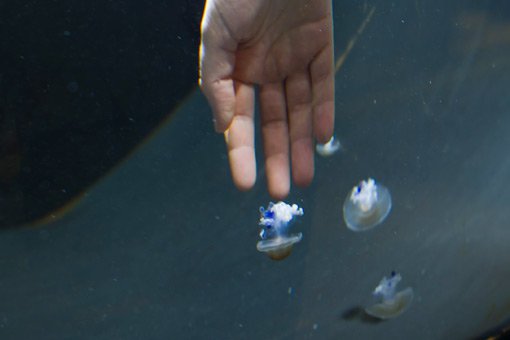 Below is  a picture of an adult Fried Egg Jelly. They can grow to 13 inches in diameter! 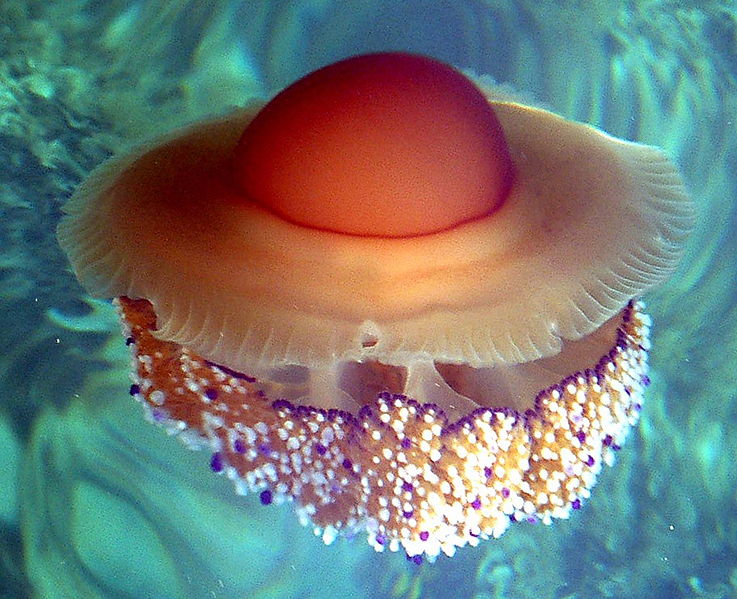 And now for something completely different... Last month the San Antonio Zoo welcomed about 1,000 "baby" Moon Jellies. Young jellyfish go through a variety of stages in their development so bear with us on this one...

New Moon Jellies start out as eggs carried by the mama jelly. After fertilization, the eggs hatch into a young larval stage called a planula, which float around for a day or so munching on delicious plankton. After chowing down, these planula float to the sea floor and attach themselves like sea anemones. At this stage they are called polyps, seen below. 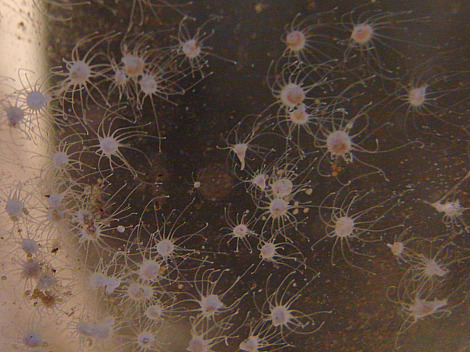 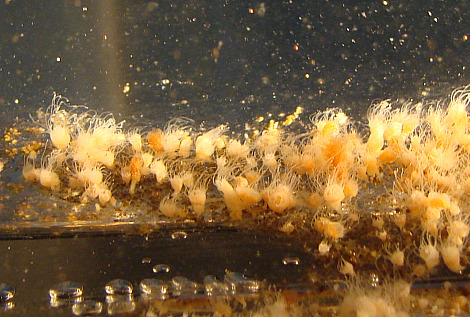 These polyps then divide into multiple ephyrae which look like little snowflakes. 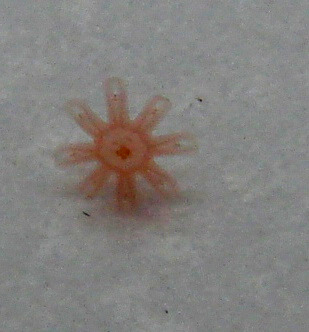 These ephyrae eventually grow into medusae, which is the adult form of jellyfish that you have come to know and love, or possibly fear, at the beach... 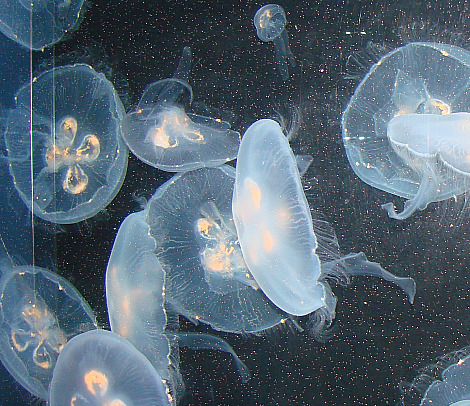 All of these pictures come courtesy of Eddie Sunila of the San Antonio Zoo and we encourage visitors in the area to go see these strange critters in person. In case it was not clear from the bizarre development cycle outlined above, jellyfish are most definitely not fish.