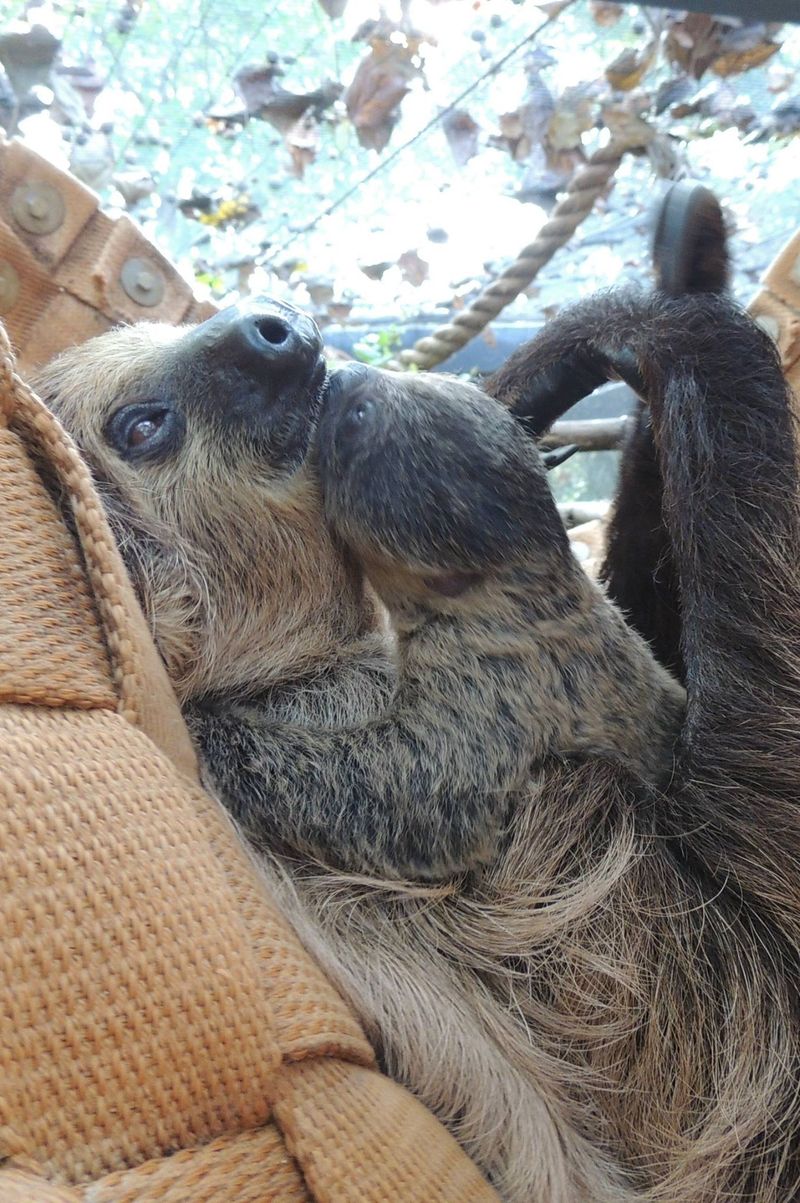 The new baby was born April 21st, to mom ‘Harriet’. Mother and baby are doing well, and they are both on exhibit. However, Harriet is quite protective of her new offspring, and visitors will need to have patience if they want to catch a glimpse of the new family. 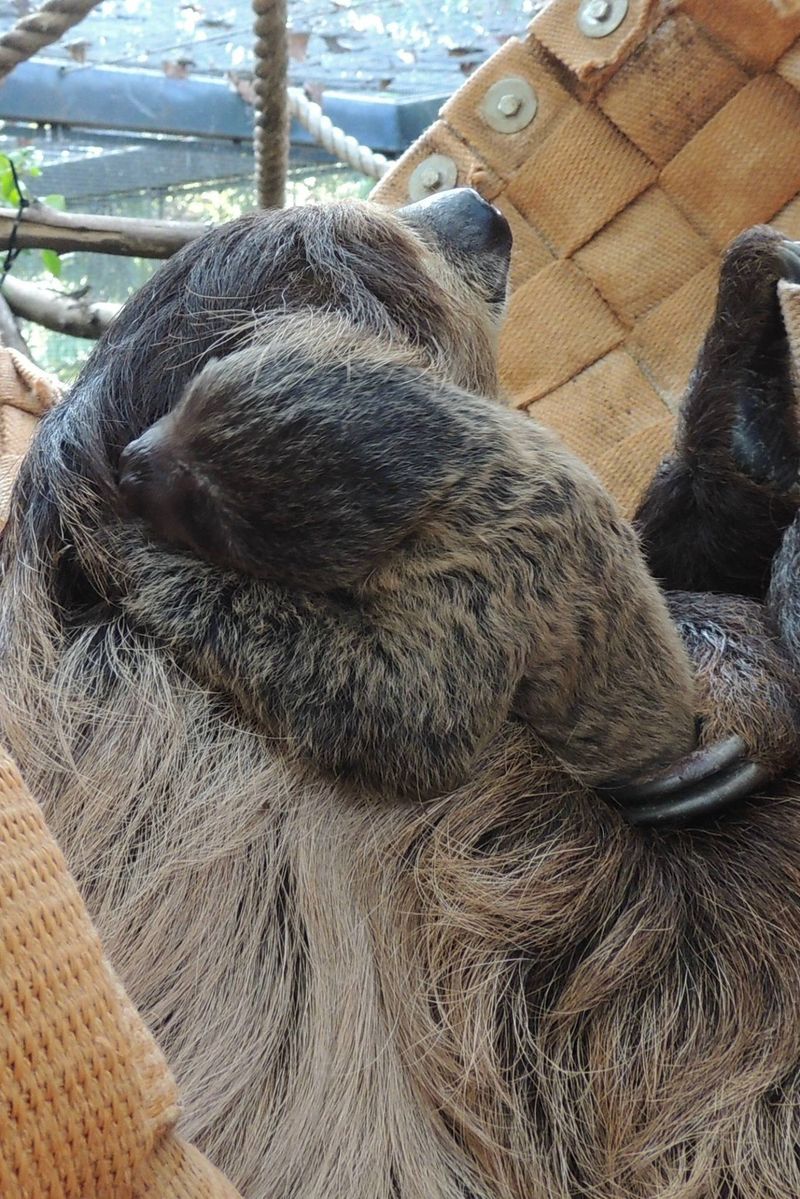 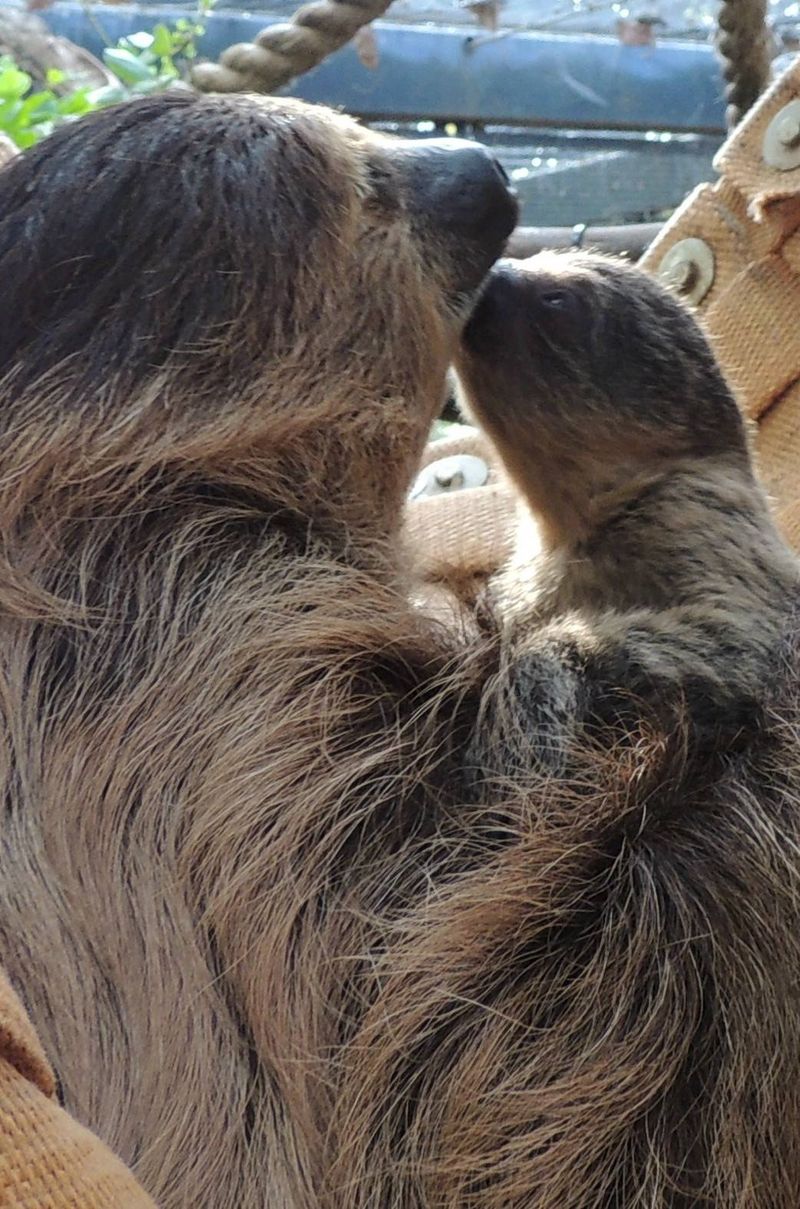 Linnaeus’s Two-Toed Sloth (also known as the Southern Two-Toed Sloth or Unau) is a species of sloth from South America. They are found in Venezuela, the Guyanas, Columbia, Ecuador, Peru, and Brazil north of the Amazon River.

It is a solitary, nocturnal and arboreal animal, found predominately in rainforests. Linnie’s Two-Toed Sloth is able to swim, which enables their travel across rivers and creeks, but they are seemingly built for life in treetops. They spend nearly all of their lifetime hanging from branches. Sloths will often sleep 15 to 20 hours, in trees. At night, they will search for food, generally leaves, shoots and fruits.

Two-Toed Sloth’s mate and give birth while hanging from branches. Gestation length is approximately 10 months. Newborns will cling, solely, to their mother for about five weeks after birth.

Modern Sloths are divided into two families, based on the number of toes on their front feet. Linnaeus’s Two-Toed Sloth and Hoffman’s Two-Toed Sloth are larger than their three-toed counterparts. They also possess longer hair, bigger eyes and their back and front legs are more equal in length.

The Linnaeus’s Two-Toed Sloth is currently listed as “Least Concern” on the IUCN Red List. Their main threat is loss of habitat due to deforestation of the South American rainforests for farming, residential areas and ranching. 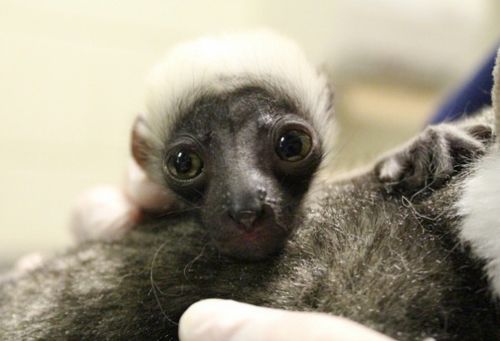 The Houston Zoo welcomed a rare baby Coquerel's Sifaka, born on January 28 to mother Zenobia and father Gaius. The baby weighed only 3.4 ounces (96 grams) at birth, and staff have been paying close attention to be sure it is nursing well and staying healthy. The goal is for it to reach about 7-8 pounds in adulthood. Houston Zoo Keepers have studied Sifakas in depth and learned that the key to preventing infant mortality was directly related to its steady weight gain.

For the next three to four weeks, the infant will cling to its mother's belly for warmth and access to nutrition. Babies can decline in weight easily and weaken their grip on Mom’s fur as they lose strength. To prevent this, Keepers know to intervene if even a few grams are lost. That means Zoo vets must weigh the baby regularly and give needed fluids if necessary. In a quick and simple process, a decline can be reversed and the baby goes right back to mom. Then, for three to four months more, it will switch to riding on her back. 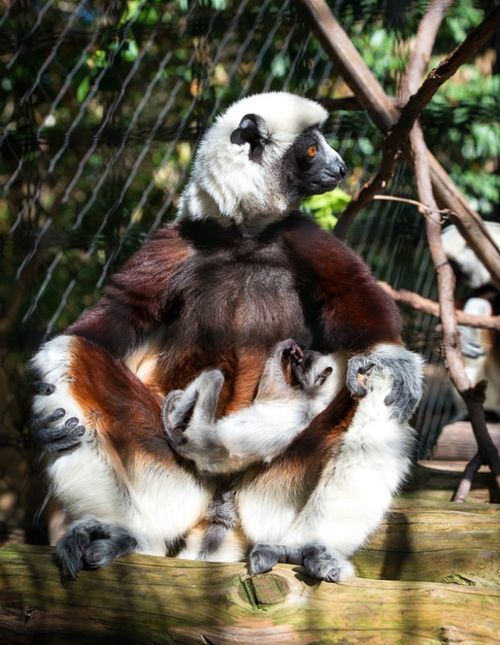 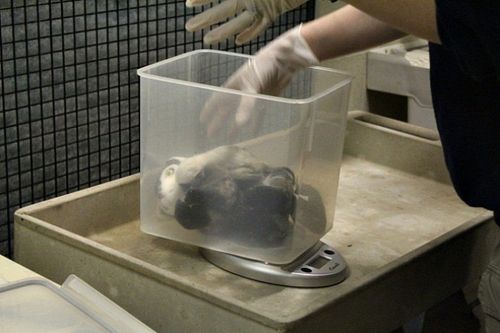 Sifakas are from the Lemur family and are classified as Endangered in the wild. The species is from Madagascar, where deforestation has been getting worse every year and therefore poses a threat to their habitat, and thus their survival.

Read more about the weighing process and see more pictures after the fold: 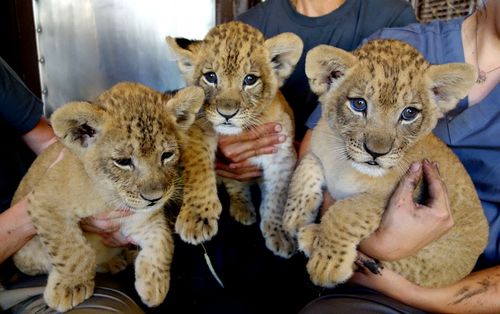 The furry-bellied Lion cub trio at Honolulu Zoo that you may have read about here on ZooBorns are getting bigger! Born on December 15, at six weeks old their weigh-in had them at a healthy 14 pounds (6.35 kg) each; since then they have continued to grow at a good pace.

The cubs are not yet ready to be in the large exhibit so they spend their time behind the scenes with their mother, Moxy. Zoo staff worked with the City’s Department of Information Technology to provide a live feed for public viewing of them on a monitor at the old gift store display window. Zoo staff hopes that after they complete their inoculations (within the next 60 days), and get the approval of Zoo Veterinarian, Dr. Ben Okimoto, they can be introduced to their habitat. 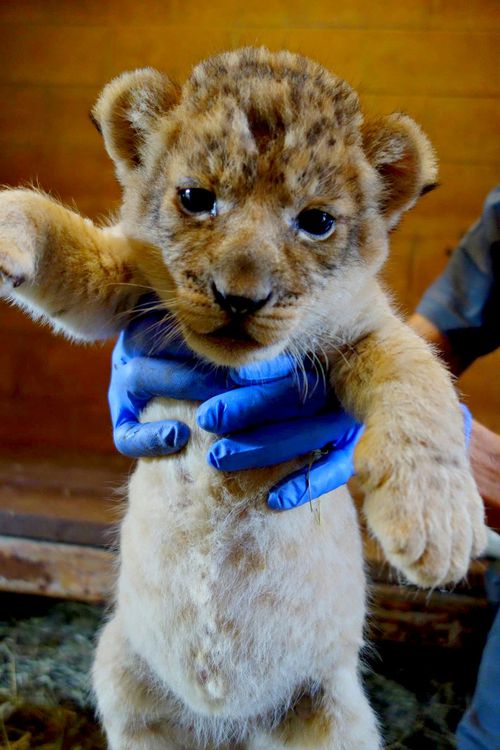 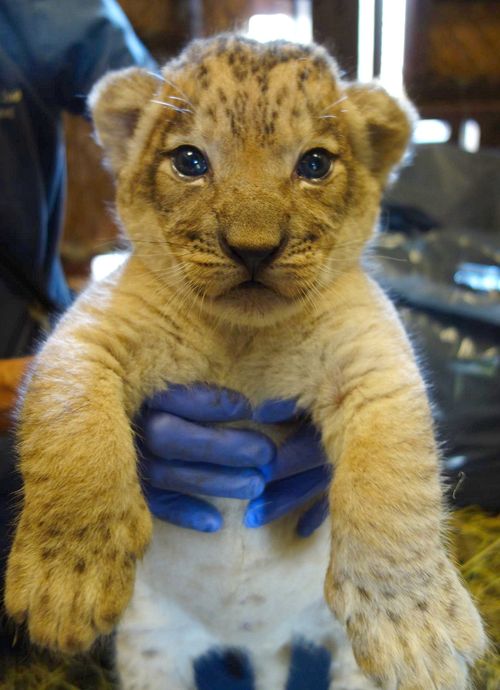 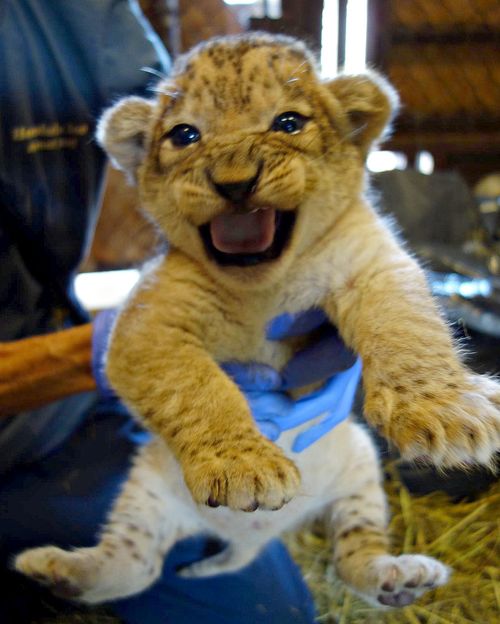 The cubs are becoming stronger, thanks in part to play, which develops motor skills, balance and hunting behavior. With three cubs, it's three times the fun, as captured on the Zoo's closed circuit cameras. Moxy, The Honolulu Zoo’s female lioness, gave birth to three lively cubs on Saturday evening, December 15.  Mammal Specialist Robert Porec said, "The birth went smoothly. The lioness and her cubs will remain in their birthing quarters for the near future." Although Moxy is proving to be a very good mom, the family is being closely monitored by the zoo's veterinary staff -- and the babies are thriving. Last week, keepers were able to separate Moxy from her cubs so they could clean the pen, weigh the cubs and determine their sex -- a process which mom accepted calmly.

The cubs’ weights were 7.36 lbs. (3.34 kg) for the first born, a female, 8.11 lbs. (3.68 kg) for the male, and 6.92 lbs. (3.14 kg) for the third born, another female. They will receive their first set of vaccinations at 4 weeks of age, then again at 6 and 12 weeks. After completing their inoculations and upon the approval of Dr Ben Okimoto, Zoo Veterinarian, they will be introduced to their exhibit (estimated to be in Mid-March). 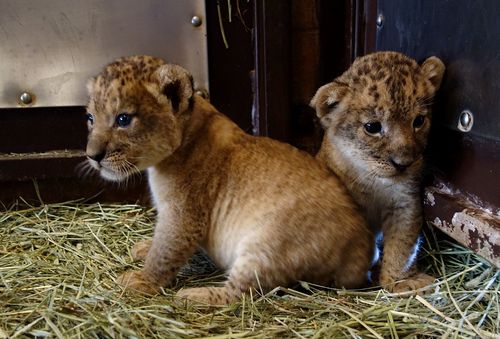 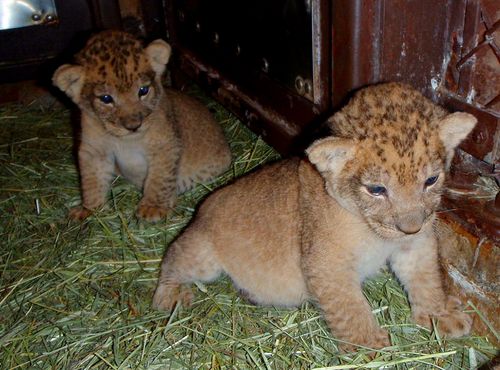 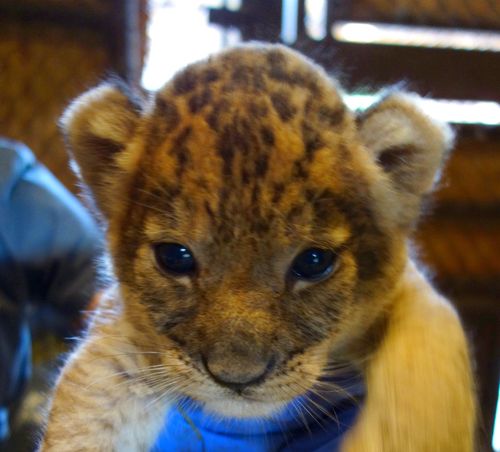 These are Transvaal Lions (Panthera leo krugeri), also known as the Southeast Lion, a subspecies named after the Transvaal region in South Africa where they can be found. Ekundu, the father, was born at the San Diego Safari Park in California, and Moxy was born at the Bronx Zoo in New York. The parents are at the Honolulu Zoo on a breeding loan.

Here is a video of the cubs nursing, taken on January 9, from the Zoo's closed circuit camera behind the scenes. 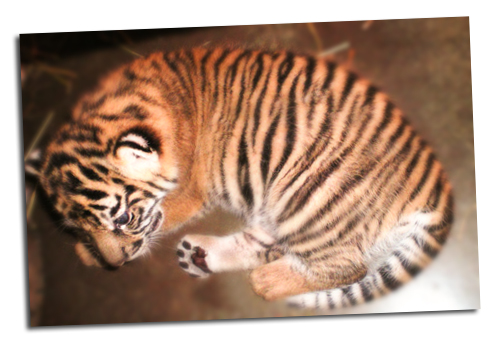 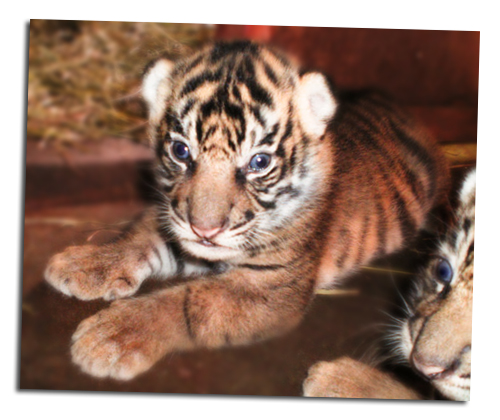 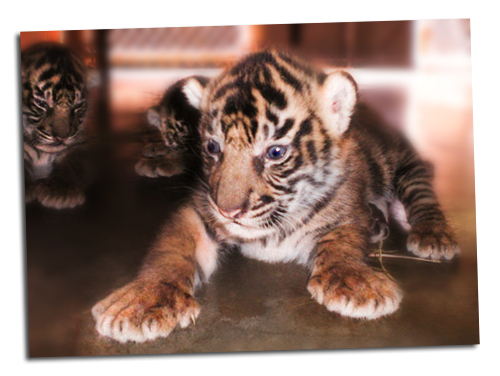 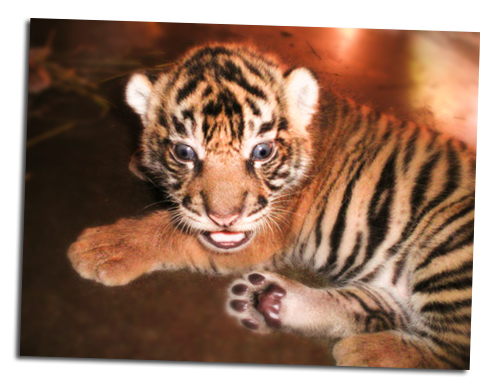 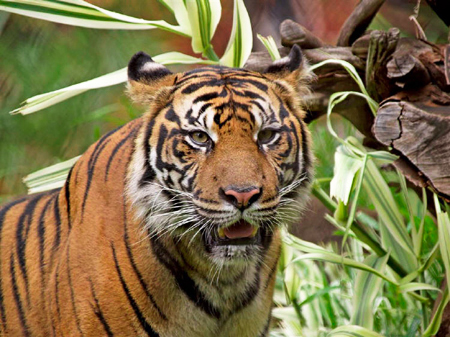 (you better let them sleep) 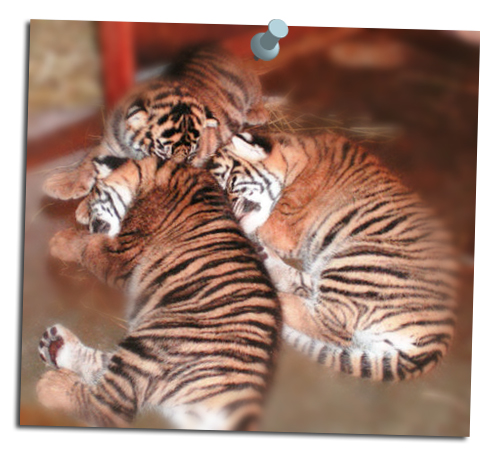