Second Guanaco Birth of the Year in Prague 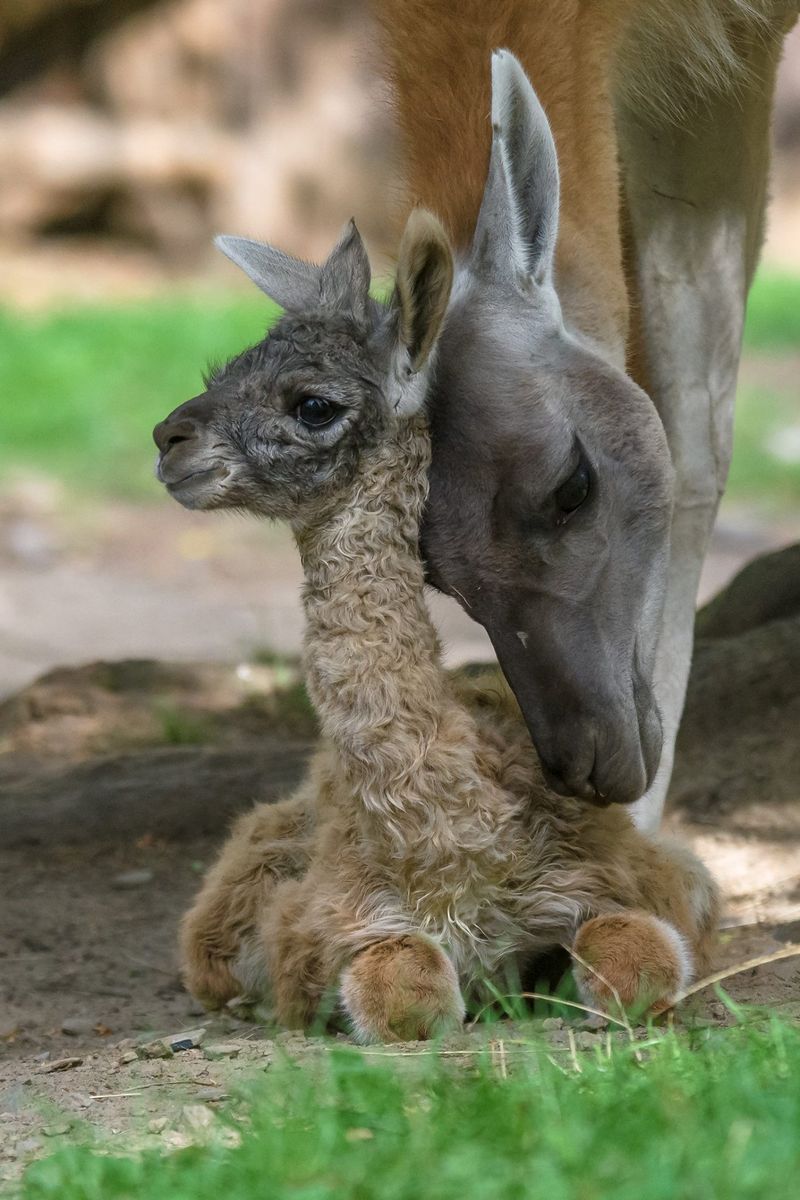 Zoo Praha, in the Czech Republic, welcomed their second Guanaco birth of the year. The new baby was born September 10th and has been enjoying the zoo’s outdoor exhibit with mom. 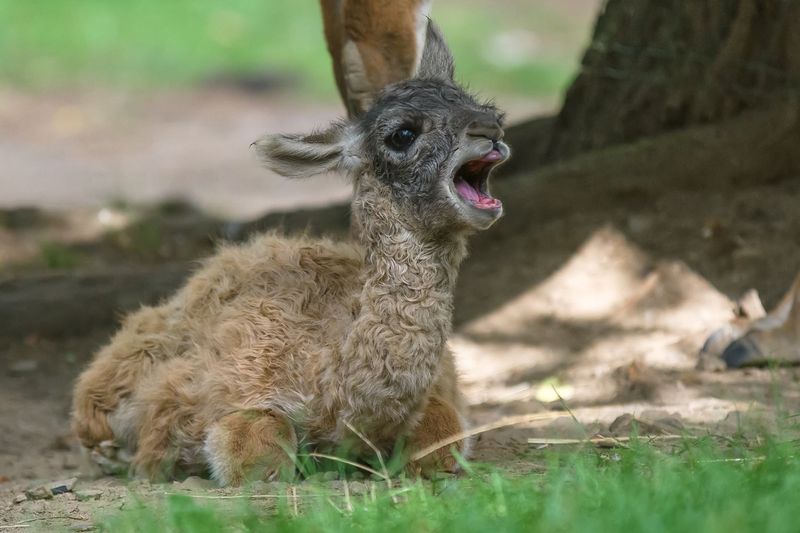 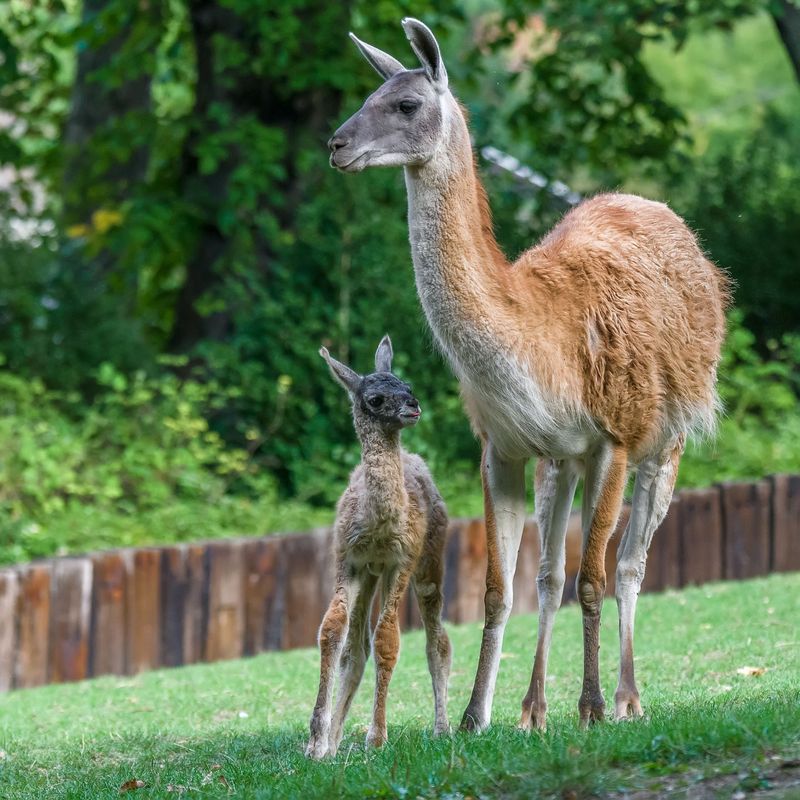 The Guanaco (Lama guanicoe) is a camelid native to the mountainous regions of South America. Llamas are descendants of wild Guanacos that were domesticated 6,000 to 7,000 years ago. Andean peoples raise Guanacos for wool, meat, and skin and also utilize them as pack animals.

Guanaco live in herds composed of females, their young, and a dominant male. Bachelor males form separate herds. When feeling threatened, Guanacos alert the herd to flee using a high-pitched, bleating call. The male usually runs behind the herd to defend them. They are known to run at 35 mph (56 km/per hour).

Gestation for the Guanaco is about 11.5 months, with offspring being able to walk immediately after birth. Young Guanaco are called ‘chulengos’. Male chulengos are chased away from the herd at around one year of age.

The Guanaco is classified as “Least Concern” on the IUCN Red List. Aside from being occasionally hunted by man, their natural predators include: cougars, jaguars, and foxes. 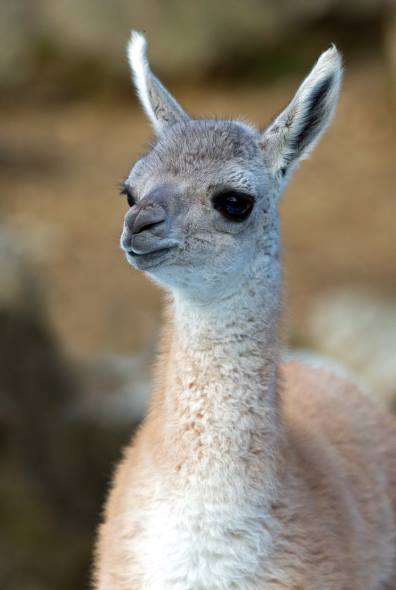 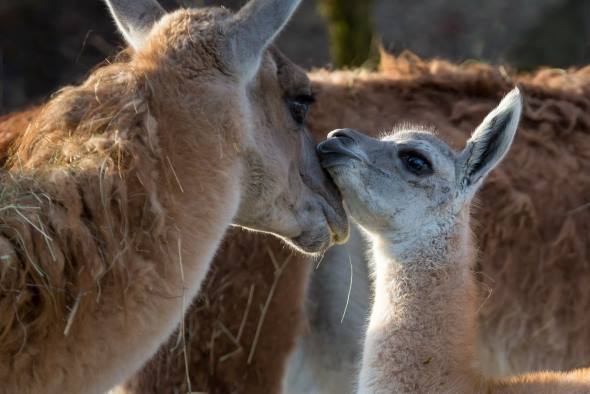 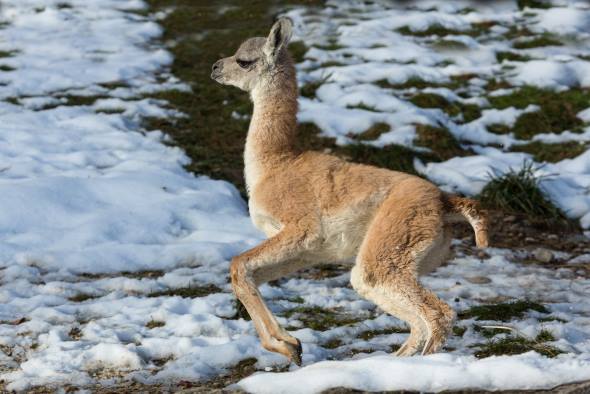 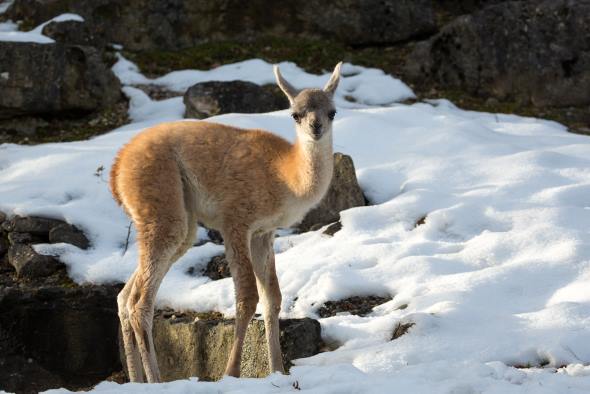 Wild relatives of the Llama, Guanacos are hump-less members of the Camelidae family that inhabit the arid and semi-arid habitats of South America, as well as the Andean forests of Tierra del Fuego. They range from southern Chile to southern Peru, up to elevations of 14,500 feet. Their last remaining stronghold is the Patagonian steppe, a vast, windswept expanse of Argentina and southernmost Chile. To survive in harsh, dry climates, Guanacos have a remarkable ability to conserve water and, like other camels, can obtain moisture from the plants they eat.

Most Guanacos live in herds composed of family groups or “bachelor” males and females, but some males are solitary. They graze on grasses, leaves and buds, and, as the largest native herbivore in Patagonia, played a key role in structuring native vegetation communities. Their quivery, sensitive lips help them select tender food among thorny and woody vegetation, and their softly padded feet do not damage the soil and vegetation as do the hard hooves of livestock.

Guanacos have been reduced by nearly 95 percent of their original number, which may have been as much as 50 million. Early explorers described long-distance migrations by huge herds, but now Guanacos are mostly sedentary, confined by fences, livestock, and hunting.