Join Greensboro Science Center veterinarian, Dr. Sam Young, as his team gives their male Fishing cat, Angler, a physical exam. Dr. Sam is also joined by vet staff from the Cincinnati Zoo and Botanical Garden who visited the GSC in order to collect semen samples from Angler, which can then be preserved to help ensure a healthy population of Fishing cats in AZA institutions across the world. http://greensboroscience.org

A Day in the Life - Keeper - Kelly

Join Greensboro Science Center Keeper, Kelly Rauch, as she walks you through what a typical day is like for her at the Greensboro Science Center. Kelly takes care of their Okapi, Southern ground hornbill and Red pandas. Happy Keeper Appreciation Week to all of the keepers and aquarists out there! Thank you for all of your hard work and dedication!

GREENSBORO, NC — Ravi, the red panda cub born at the Greensboro Science Center (GSC) on June 20, will be moved to the Shearer Animal Hospital on Thursday, July 14, 2022, where he will be visible to GSC guests through a window.

Members of the media working on assignment are invited to interview members of Ravi’s care team and take photos and video of the cub from 8:45 a.m. – 9:15 a.m. on Thursday. The opening of the Shearer Animal Hospital to the public will be delayed until 9:15 a.m. 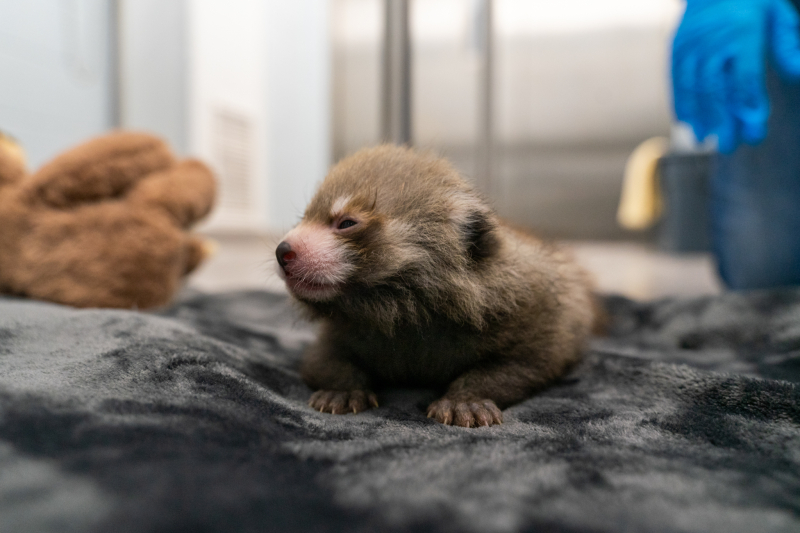 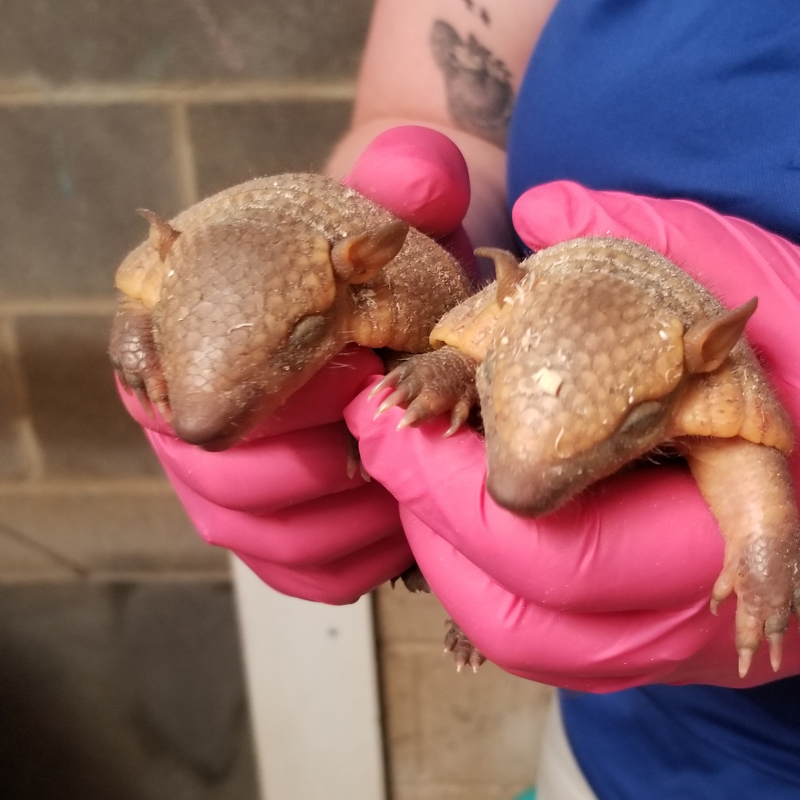 At the Greensboro Science Center, there are two adult screaming hairy armadillos, Lenny and Rizzo. At the beginning of May, they were placed together for breeding. They were successful and two pups were born on June 19th. These adorable armadillos are the only two born in the US so far this year, an extremely rare and important achievement. The pups, Malcolm and Harriet, are already almost fully grown. They have started exploring their habitat and are enjoying their first tastes of solid food. They will not be fully weaned until they are five months old, so right now they are learning from their mama, Rizzo. When they were brought outside for enrichment, it was discovered Malcolm loves digging! He spent the majority of his time exploring this new environment. And Harriet is enamored with the Burmese star tortoises she met during this time. They have started training and are proving to be just as smart as their mother! 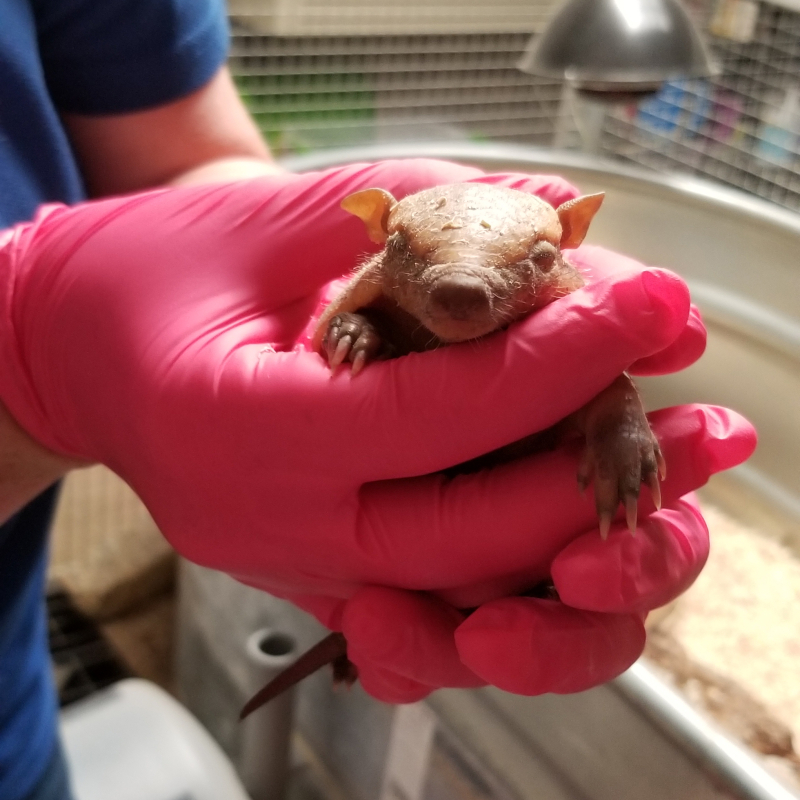 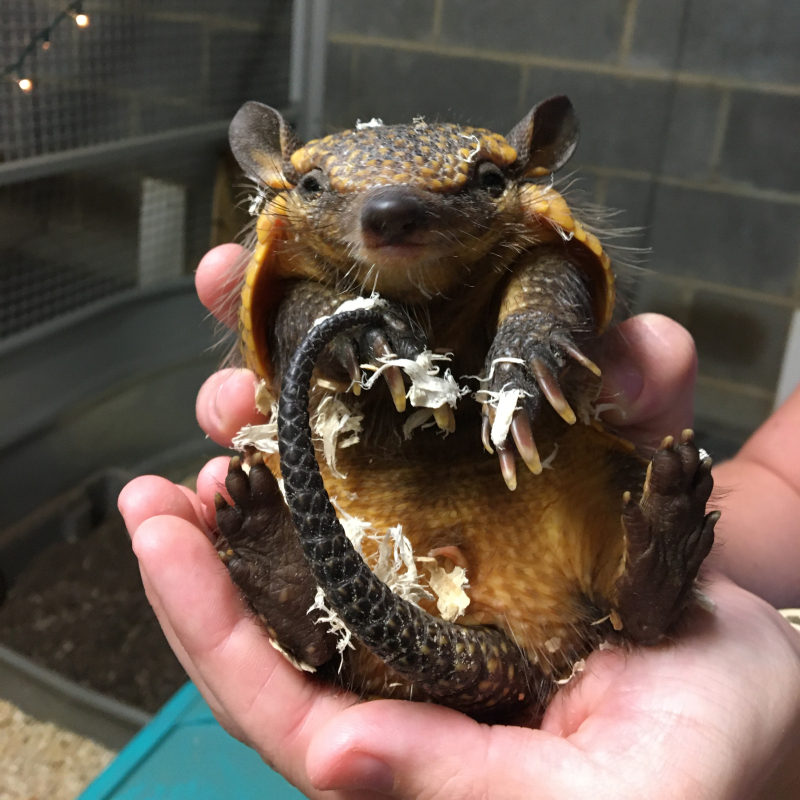 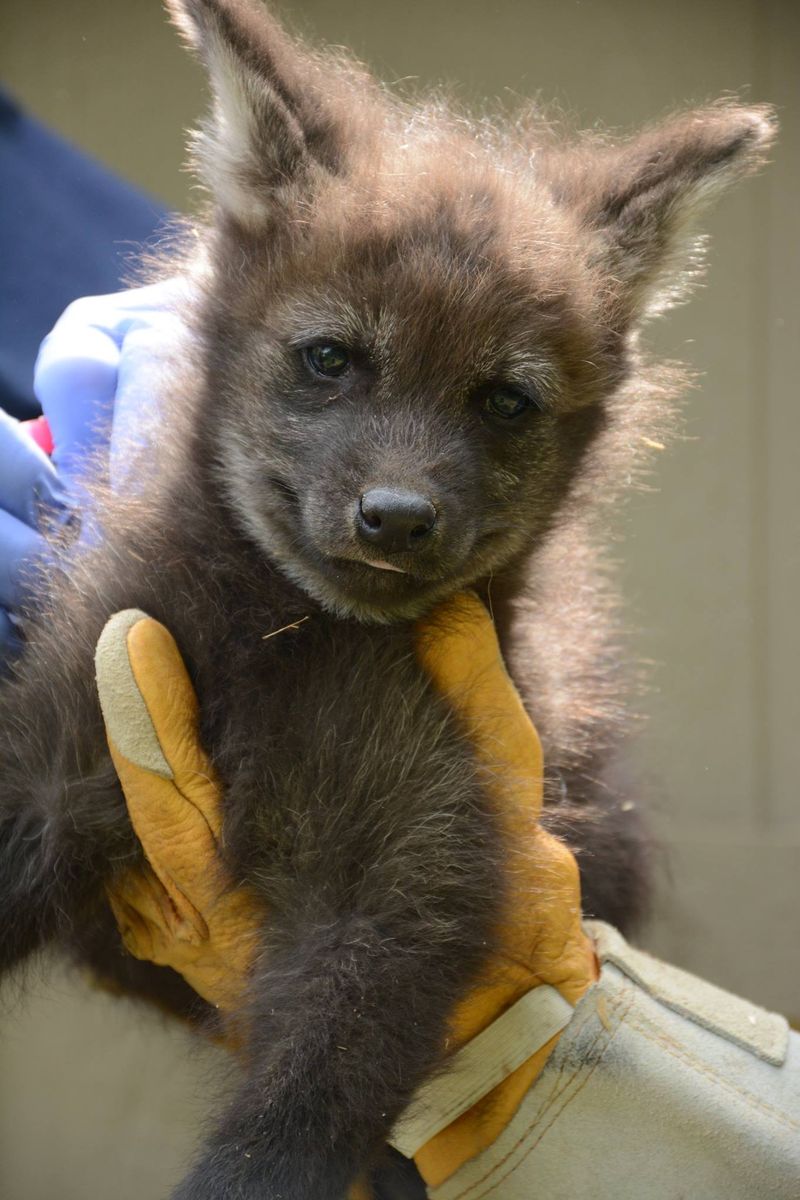 Greensboro Science Center is excited about the birth of two Maned Wolf pups! The pups, a male and a female, were born on March 7 to mom Anaheim and dad Nazca.

The wolves’ exhibit was closed from mid-February till the beginning of April, in preparation for the birth and to allow the new family to bond.

The pups are now on exhibit, but staff remind visitors to keep in mind that the pups may or may not be visible, depending on whether or not they choose to come out of their den boxes.

The Greensboro Science Center is also excited to announce that the pups now have names! After a contest was conducted via social media, the zoo is happy to introduce…Rio and Rosario. 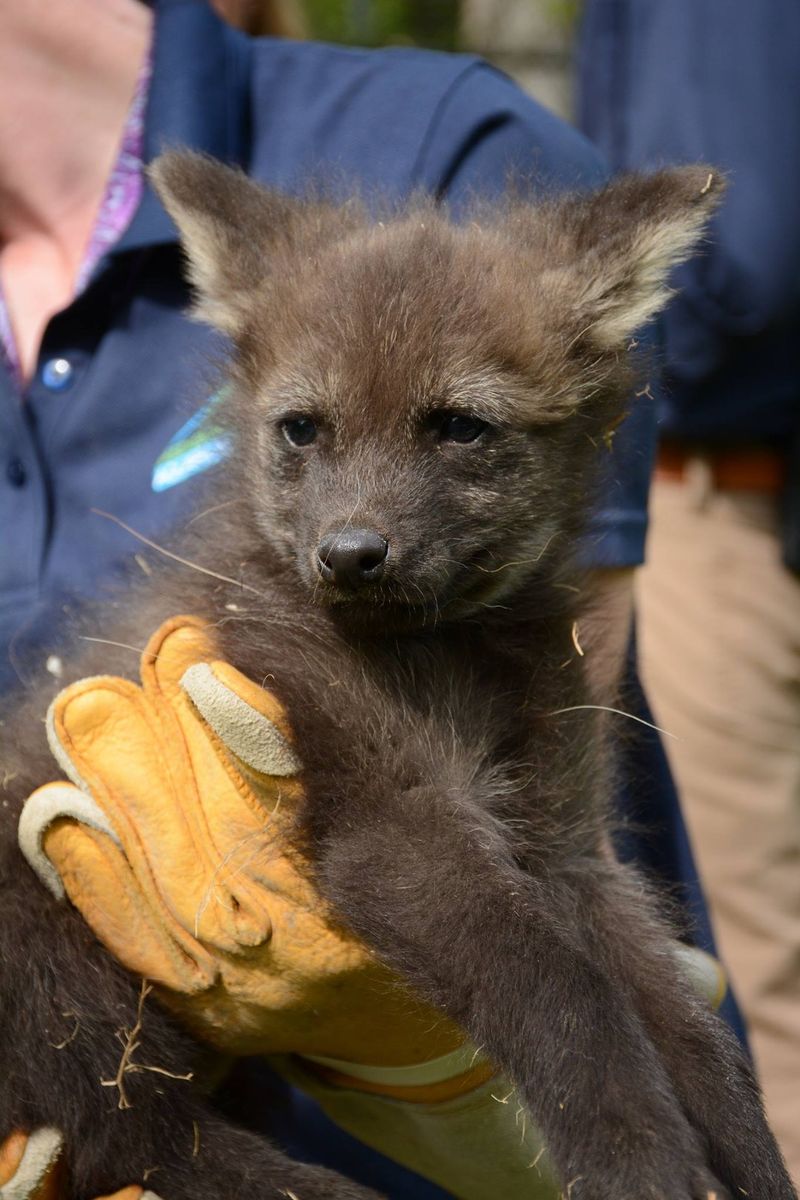 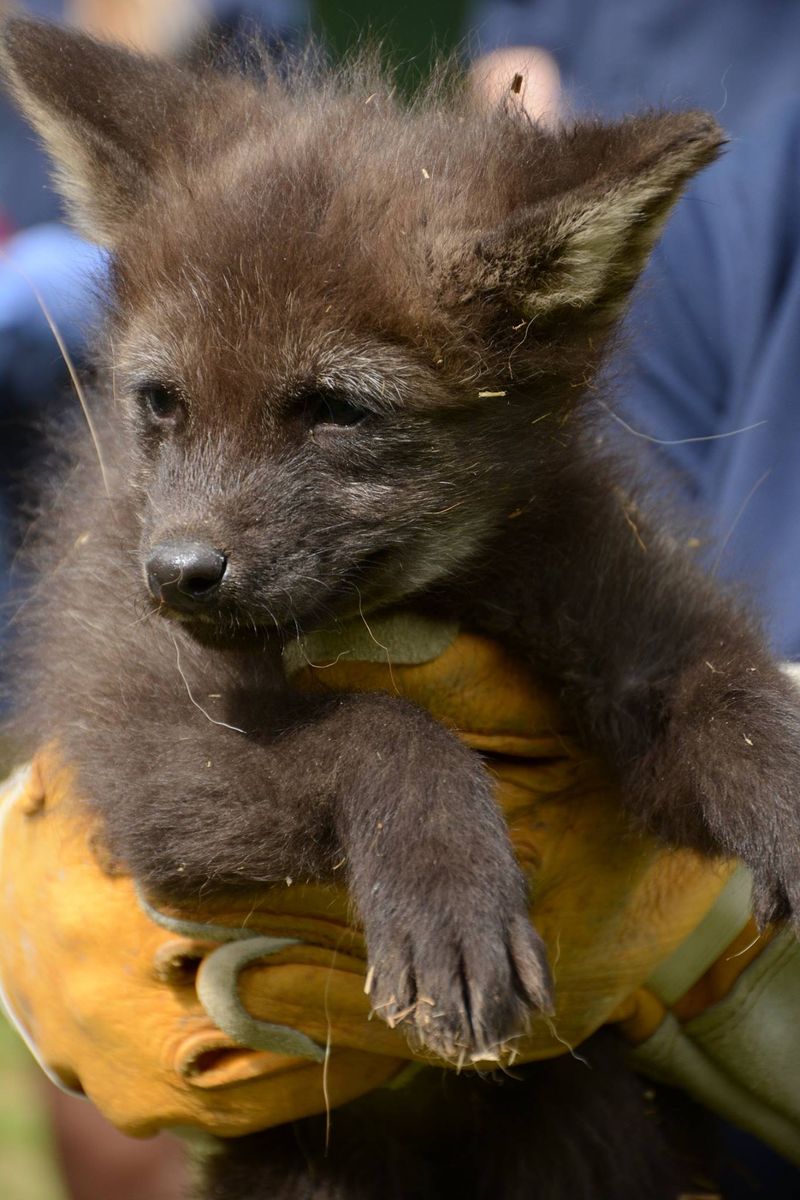 The Maned Wolf (Chrysocyon brachyurus) is the largest canid of South America. Its markings resemble those of foxes, but it is not a fox (nor is it a wolf), as it is not closely related to other canids. It is the only species in the genus Chrysocyon (meaning "golden dog").

This mammal is found in open and semi-open habitats, especially grasslands with scattered bushes and trees, in south, central-west, and southeastern Brazil, Paraguay, northern Argentina, Bolivia east and north of the Andes, and far southeastern Peru (Pampas del Heath only). It is very rare in Uruguay, possibly being displaced completely through loss of habitat. The IUCN classifies it as “Near Threatened”, while it is considered a vulnerable species by the Brazilian government (IBAMA). 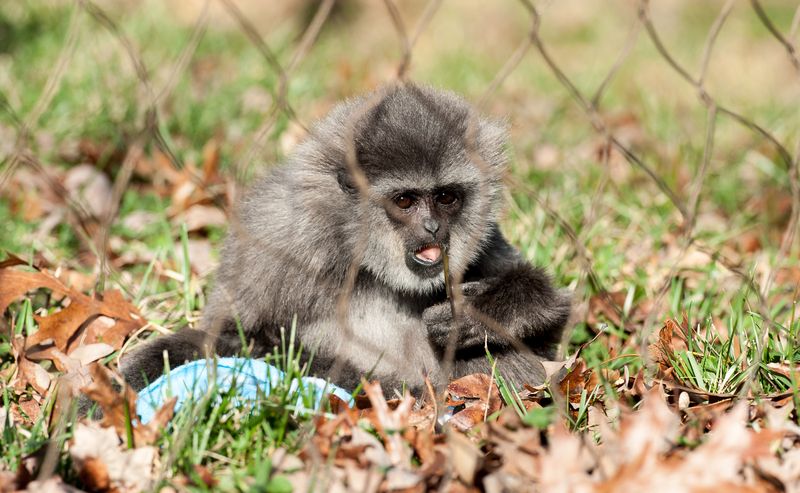 On April 29, 2013, it's doubtful anyone, at Greensboro Science Center, knew how much of an impact the tiny Javan Gibbon, born that day, would have on the facility or the community. The rare, endangered male was born to mom, ‘Isabella’, in the Center’s indoor Gibbon habitat.

In both the wild and in zoos, it’s not unusual for first-time mother Gibbons to abandon their first child, and that’s exactly what happened to the fragile newborn, who was discovered alone in the Gibbon habitat. Thanks to the expert care of zoo keepers, veterinarians, and the staff of a local hospital, the baby, named ‘Duke’, was revived and stabilized. To give Duke the best chance of survival, zoo staffers decided to hand-rear the baby for the next six months, and then try to reintroduce him to his parents, Isabella and Leon, in the exhibit.

ZooBorns shared Duke’s compelling story in two installments: in his birth announcement and in a later update that chronicled his progress. 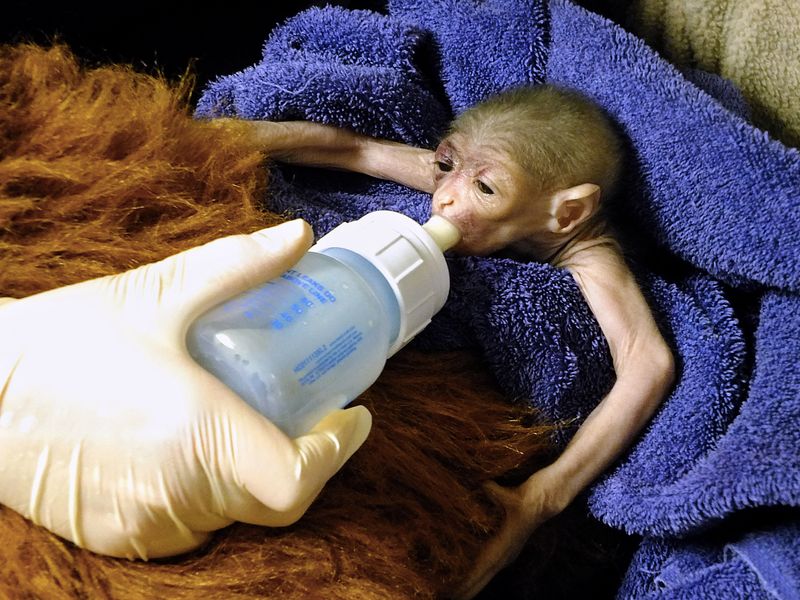 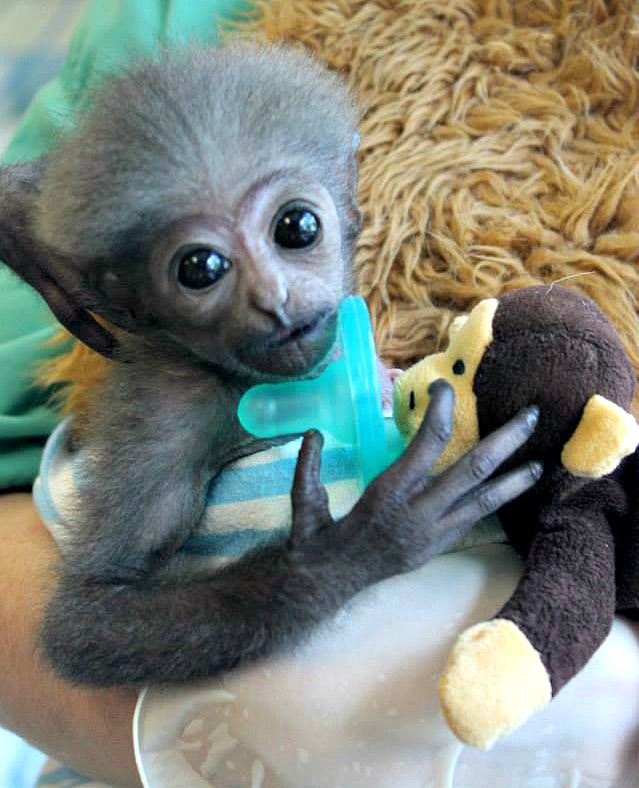 We have since learned there is more to Duke’s touching story. The University of North Carolina Center for Public Television recently produced a short segment for the program “North Carolina Weekend”, that aired on their local PBS station.

The segment chronicles Duke’s dramatic entrance into the world, his reintroduction to his family, and his traumatic ordeal with a broken arm.

Two-year-old Duke has become a symbol of perseverance, and his story also reiterates how important man is to the equation of conservation and stewardship of the animal kingdom. 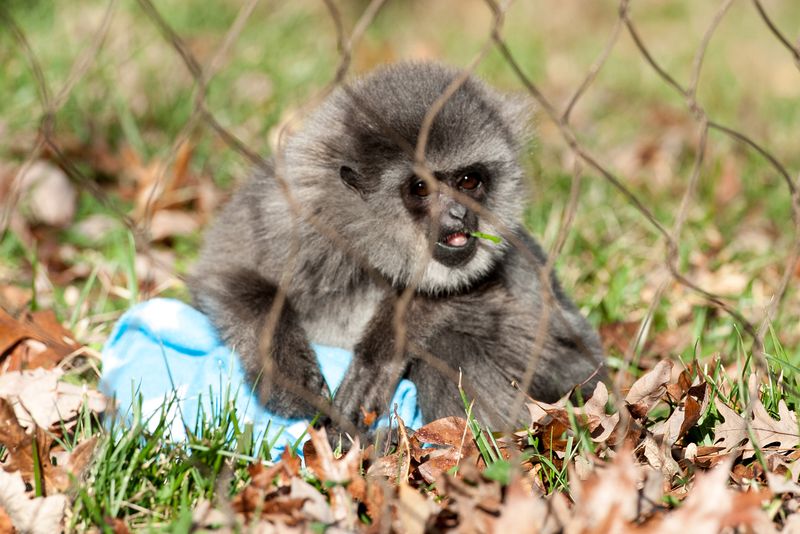 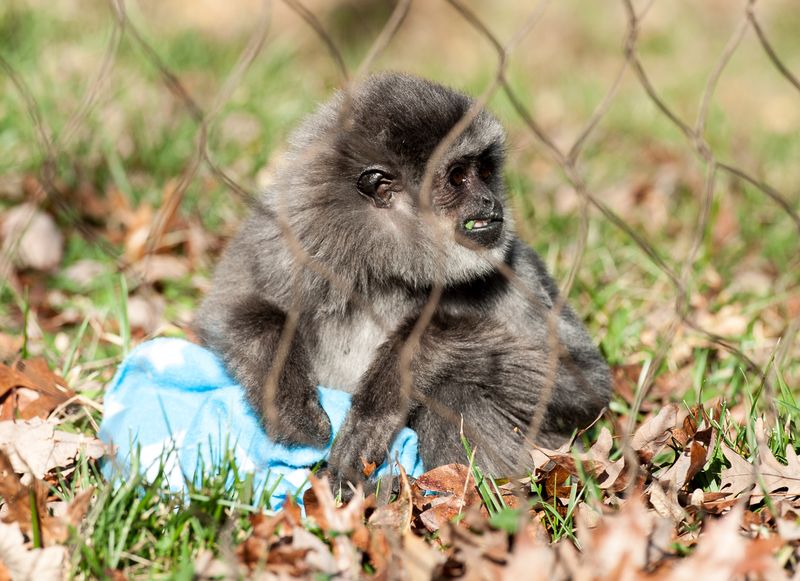 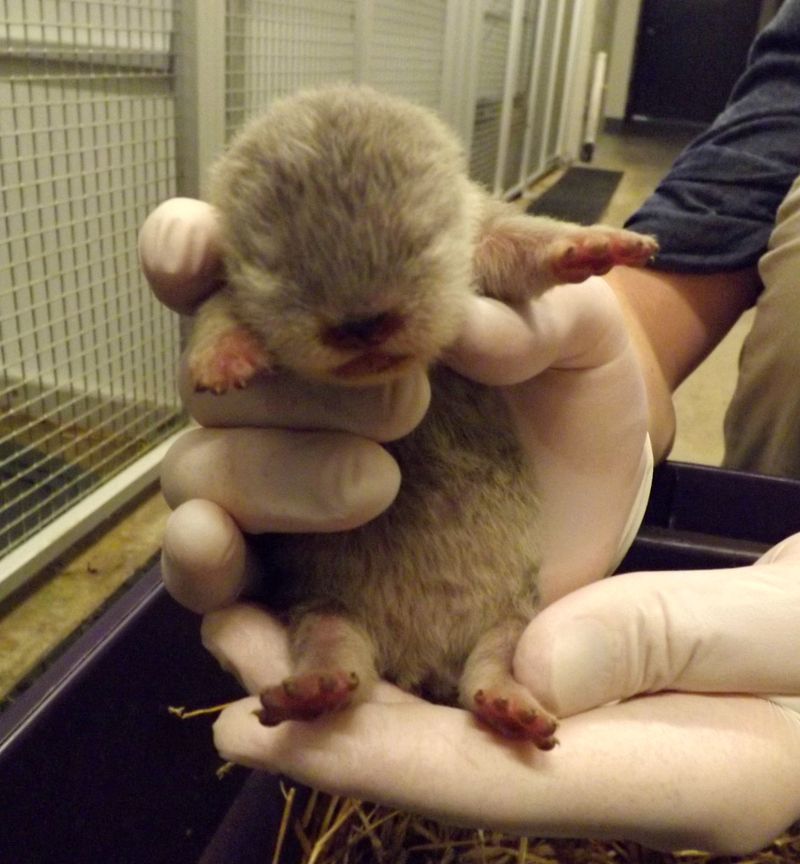 Snuggled in a furry pile, five Asian Small-clawed Otter pups born at North Carolina’s Greensboro Science Center on November 11 are just beginning to open their eyes and explore the world.

The pups are the first litter of this species ever born at the facility.  For now, the pups remain behind the scenes with their parents, Jelly and Mark Lee.  The family will move into their exhibit sometime in January or February, at which time the pups will learn how to swim in the exhibit’s deep pool. 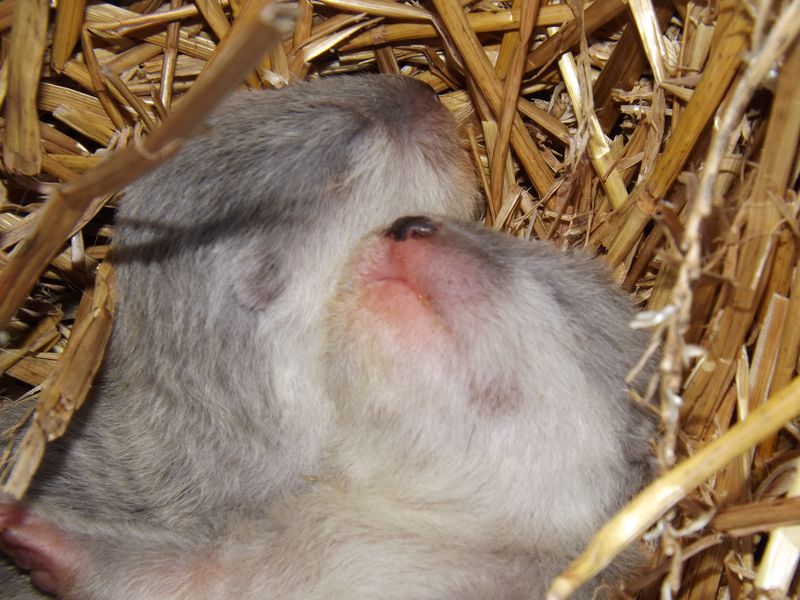 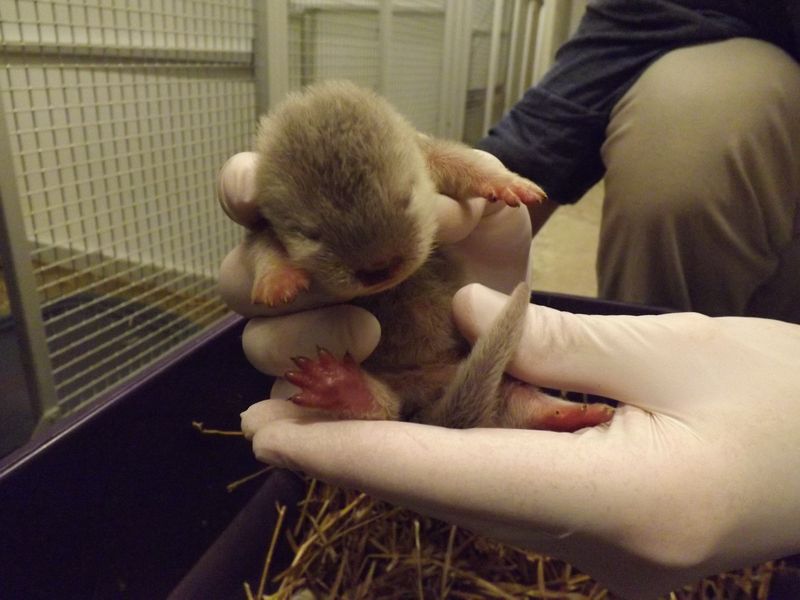 Jelly and Mark Lee came to the Science Center in the spring under the recommendation of the Association of Zoos and Aquariums’ Species Survival Plan.  Asian Small-clawed Otters form monogamous pairs and mate for life. They are the smallest of the world's Otter species and inhabit swamps, rivers, and tidal pools in southeast Asia.  The International Union for Conservation of Nature lists these Otters as Vulnerable, due to habitat degradation, hunting, and pollution.

See more photos of the Otter pups below the fold. 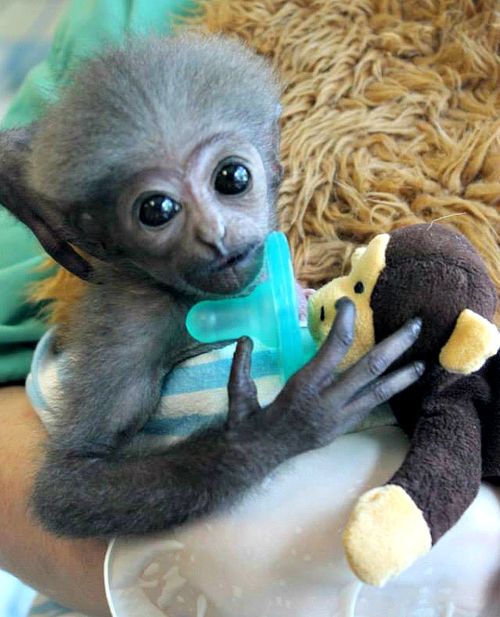 A rare Javan Gibbon baby at the Greensboro Science Center celebrated his two-month birthday last week, thanks to the dedicated efforts of staff and volunteers. 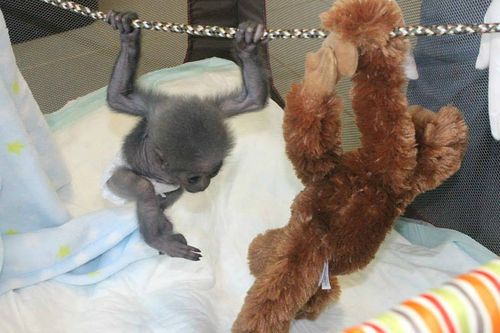 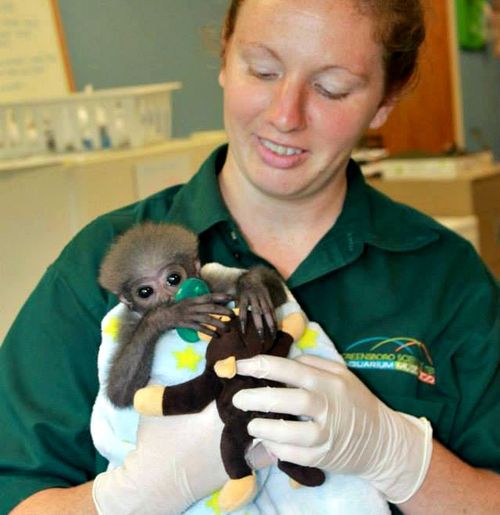 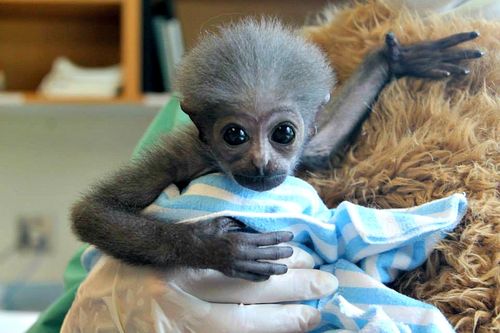 Born on April 29, the infant Gibbon was discovered abandoned by his mother, Isabella, as described in an earlier Zooborns post.  Despite attempts to reunite mother and baby, staff and volunteers have been hand-rearing the baby 24 hours a day.

Because baby Gibbons cling to their mothers day and night, zoo keepers wear a special furry vest to allow the male baby, named Duke, to cling to them.  Duke receives formula from a bottle.  Zoo keepers spend the night with Duke so he is never alone.

Zoo keepers bring Duke to see his mother, and, although they are separated by a fence, the two vocalize and touch each other.  The zoo staff plans to reunite the Gibbon family within a few months.

Javan Gibbons are endangered on the island of Java in Indonesia, their only wild home.  Only about 4,000 of these apes, also called Silvery Gibbons, remain in the wild.  Their forest habitat is under intense pressure from the island’s burgeoning human population.

See more pictures of Duke below the fold. 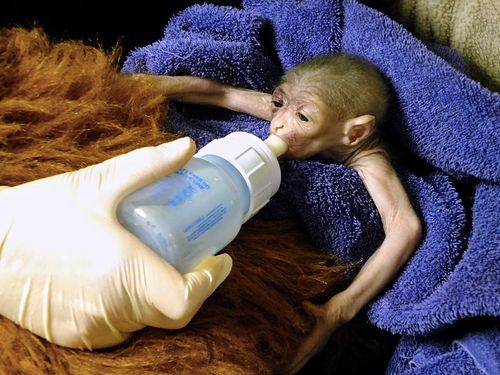 On April 29, Isabella, the Greensboro Science Center’s (GSC) rare and endangered Javan Gibbon, gave birth to a baby boy. In both the wild and in zoos, it’s not unusual for first-time mother Gibbons to abandon their first child, and that’s exactly what happened to the fragile newborn, who was discovered alone in the Gibbon habitat. Thanks to the expert care of zoo keepers, veterinarians, and the staff of a local hospital, the baby, named Duke, was revived and stabilized. To give Duke the best chance of survival, zoo staffers decided to hand-rear the baby for the next six months until he is self-sustaining, then try to reintroduce him to his parents, Isabella and Leon, in the exhibit.

The compelling story of Duke’s first few hours of life and the days immediately following his discovery are detailed below. 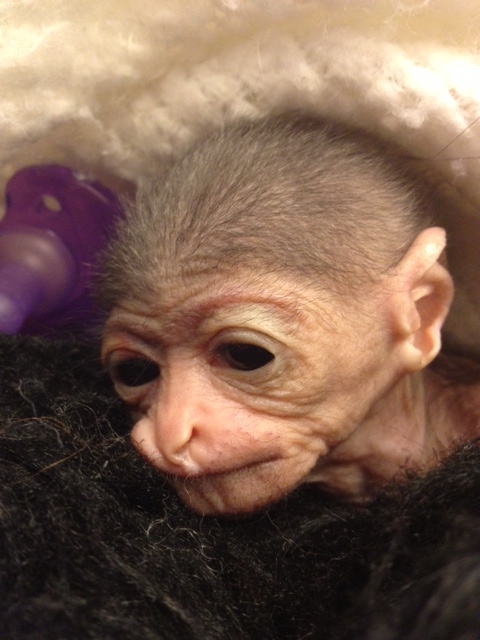 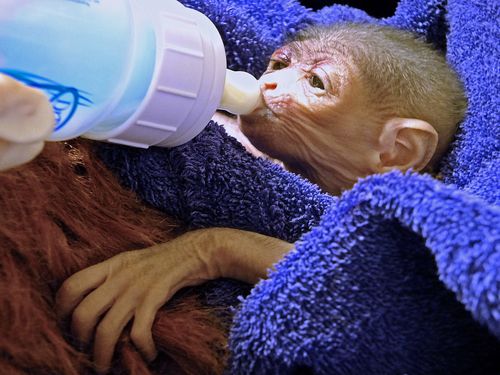 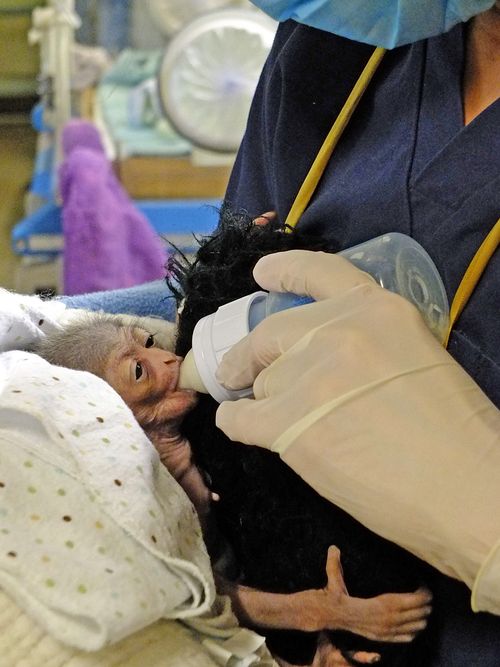 In the early morning of April 29, a zoo keeper discovered a tiny, full-term baby Javan Gibbon lying without its mother inside the Gibbons’ indoor habitat. She immediately wrapped the seemingly lifeless and cold infant into her jacket and ran back to the animal hospital. Slowly, the baby started to warm up and began moving and vocalizing. Keepers held the baby in their arms and up against the body for contact and continuous warmth the first critical hours. Room temperatures were increased to 85 degrees. Once warmed and clinging firmly to a toy Gibbon, Duke was given tiny drops of fluid to rehydrate, then he began taking diluted formula.  Duke gained strength and opened his eyes forcing a crucial decision: Should the staff try to introduce him back to Isabella or not? Knowing that parent rearing is always the best option (though filled with risk given the initial abandonment), the decision was made to introduce Duke back to his parents approximately 30 hours after being found. After some initial nervousness, Isabella grabbed him up in her arms and mother and son were reunited.

Unfortunately, after just 24 hours, it was clear that Duke was weakening and likely not nursing. After much discussion, the decision was made to hand-rear Duke knowing that staff would now need to do everything possible to keep him in visual, vocal and olfactory contact with his parents.

Duke’s condition is stable, and the GSC staff are committed to providing care 24 hours a day for the next six months.  “Nothing in nature is about fairness. It is about survival,” said GSC director Glenn Dobrogosz. “Duke, and hopefully his species, will have a fighting chance thanks to keepers, curators and wildlife biologists who dedicate their lives to preserving and protecting our world’s wild things and wild places.”

In 2012, GSC was selected by the Association of Zoos & Aquariums to be the second accredited zoo in the U.S. to exhibit and breed Javan Gibbons - one of the rarest Gibbon species on the planet found only on the island of Java in Indonesia. Duke is one of only eight born in zoos across the world and one of three born in North America in the past 12 months.