In Brownsville, TX, Gladys Porter Zoo’s three cassowary chicks hatched on May 20th, May 22nd and May 27th. The mother is Clementine (36 years old) and the father is Irwin (6 years old). Irwin is a first-time father. Clementine’s last successful brood was in 1997. It’s been 24 years since then so this is very exciting for everyone at the zoo, especially the Bird Department.  They’ve done an amazing job. 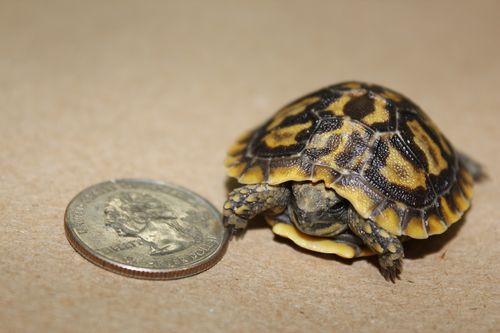 Three Pancake Tortoises have hatched at Gladys Porter Zoo in Texas. The first tortoise began to pip on March 31st, followed by two more hatchlings on April 1st and 10th.

Found on rocky hills and savannas of east Africa, Pancake Tortoises have unusually flat and thin shells. These flexible and agile tortoises are excellent climbers, and escape from predation by fleeing or squeezing into tight crevices instead of hiding in their shells. Due to habitat loss and poaching, they are listed as a vulnerable species by the IUCN. 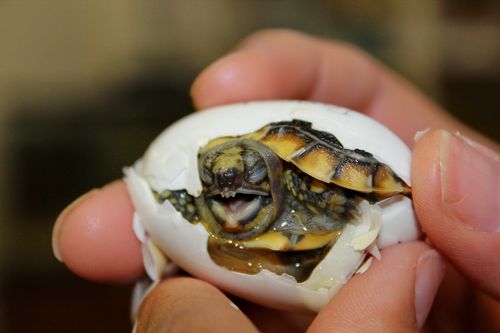 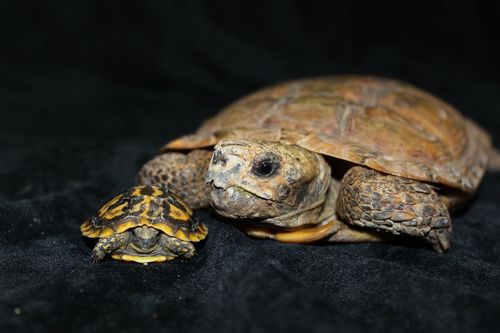 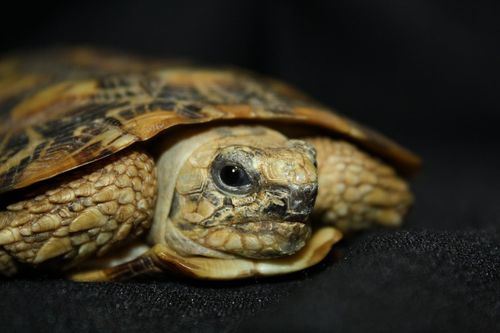 In the wild, Pancake Tortoises live in isolated groups, and many individuals may be found sharing the same rocky crevice. Males compete for females during the breeding seaon in January and February, and nesting occurs in July and August. Females generally lay one egg at a time, but may lay several eggs over the course of a few months. In captivity, females will breed year-round, with an incubation period of four to six months.  The tiny young are independent as soon as they hatch. 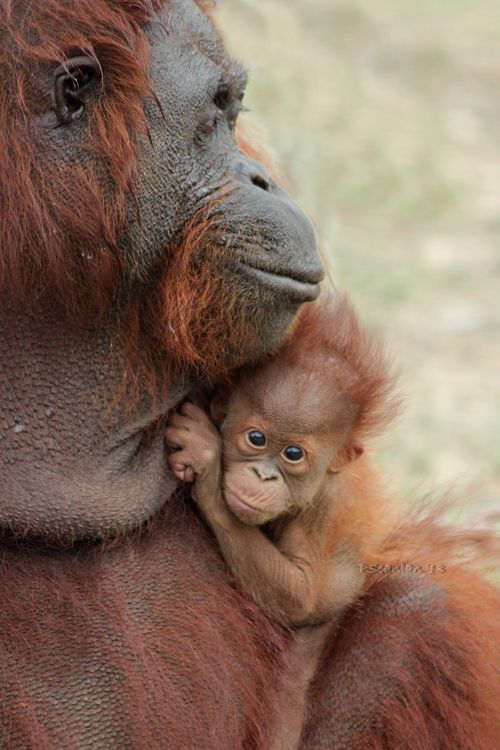 On the night of February 14, a female Sumatran Orangutan was born at Gladys Porter Zoo. Maya, the baby Orangutan, was born to Dodie, who is 35 years old. Although Dodie only has one arm, she has proven to be an excellent mother. She delivered naturally and immediately started to provide maternal care for baby Maya. And the two are quite playful with each other.

Sumatran Orangutans are classified as Critically Endangered by the IUCN.There are only about 6,600 individuals estimated to live in the wild. Experts and statistics based on their population decline suggest that Orangutans could become the first Great Ape species to become extinct. The greatest threat that this species faces is habitat loss. The forests that are home to the Orangutans are being turned into palm oil plantations at an alarming rate. More than half of their habitat has been destroyed within the last 25 years.

Three generations of Sumatran Orangutans can be seen on exhibit at Gladys Porter Zoo. Suzie, Maya's 50 year old grandmother, Dodie, her mother; and baby Maya are currently on display. 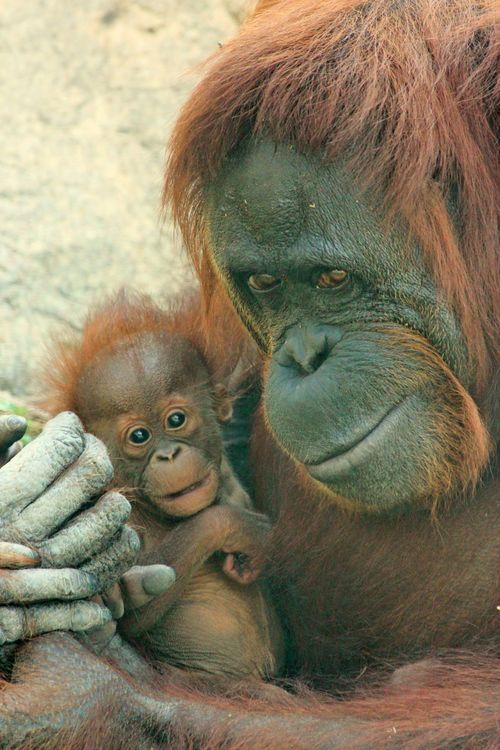 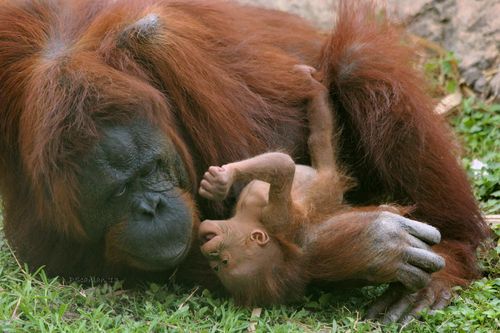 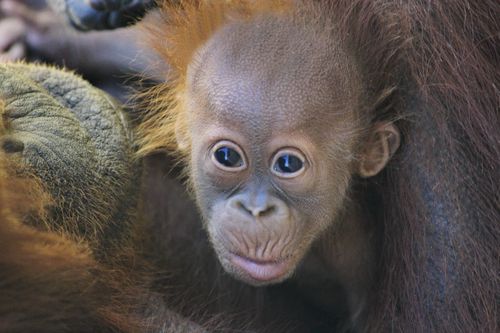 See more of this wonderful pair after the fold: 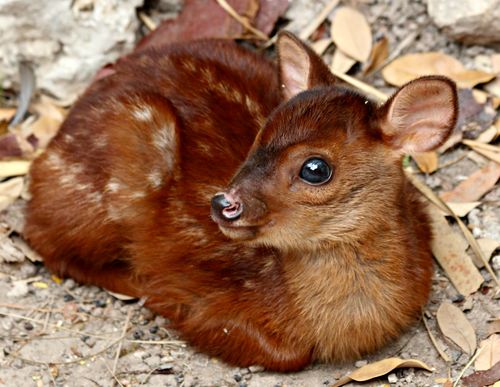 A male Red Brocket Deer was born at the Gladys Porter Zoo in Brownsville, Texas on March 25.  Barely over two weeks old, the little fawn is already actively exploring the exhibit alongside his mother. 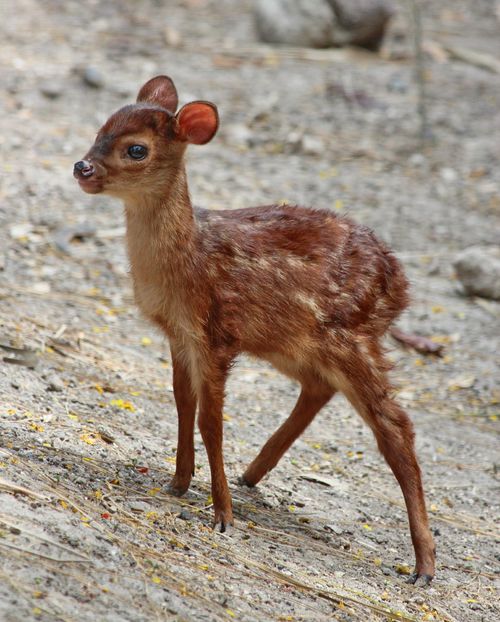 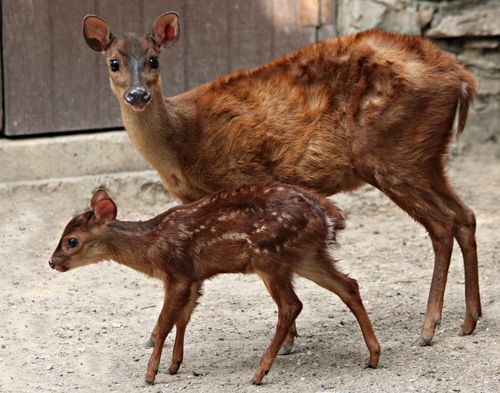 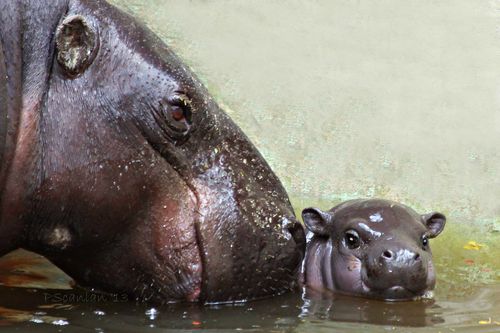 With chubby cheeks and an upturned nose, a baby Pygmy Hippopotamus may look more like a video game character than a real animal.  But this male baby, born on February 22 at the Gladys Porter Zoo in Brownsville, Texas, is an important addition to the population of this critically endangered species. 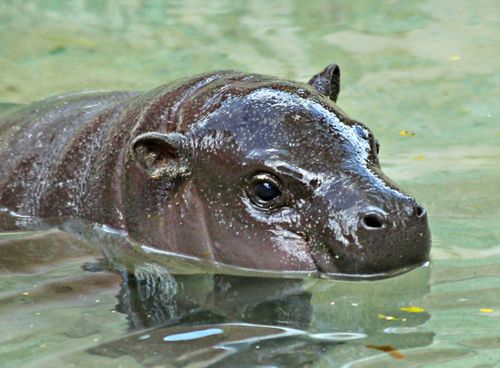 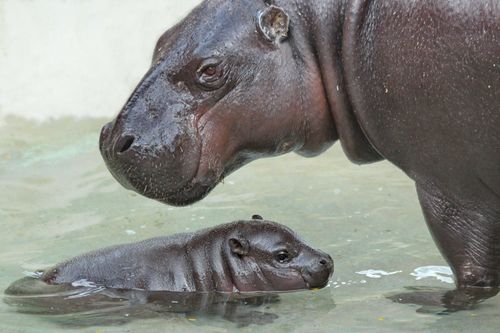 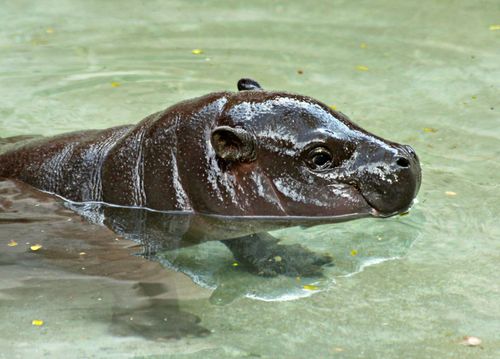 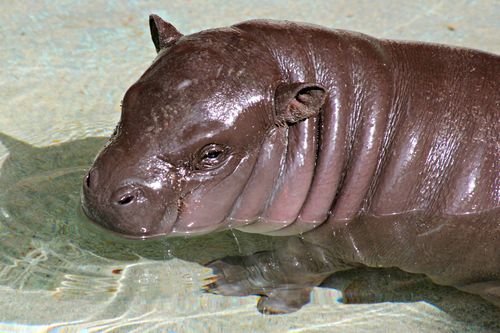 The male calf, who will be named in a soon-to-be-announced contest, made his public debut alongside his nine-year-old mother last week.  Zoo staffers report that the baby rarely strays far from his mother as he explores his surroundings.

Pygmy Hippos are native to West Africa, where they live secretive lives in the deepest jungles.  Found only in small pockets of Liberia, Sierra Leone, Guinea, Ivory Coast, and Nigeria, Pygmy Hippos are about half as tall and a quarter of the weight of their cousins the Common Hippos.  Pygmy Hippos spend the day submerged in rivers, emerging at night to eat ferns, fruits, and leaves.  To mark their territories, they wave their tails while defecating to spread feces as far as possible.

There are fewer than 3,000 Pygmy Hippos remaining in the wild, and little is known about their habits.  Though not intensely hunted, Pygmy Hippos are losing habitat to agriculture and unsustainable forest logging.  Programs like the Species Survival Plan of the Association of Zoos & Aquariums seek to maintain genetically diverse captive populations of Pygmy Hippos and many other endangered species. 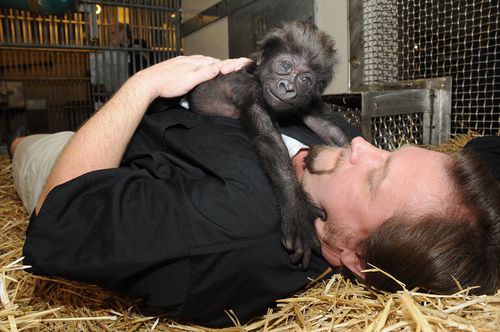 Recently we reported HERE on a little baby Gorilla who made a journey across the country from Texas to the Cincinnati Zoo to be hand reared after her birth mother wasn't able to provide her with proper care. We are happy to report that the little girl, who has since been named Gladys in honor of the zoo at which she was born, is doing well and has taken quite fondly to her surrogates. With a little help from some special attire that is.

Keepers at the Cincinnati Zoo had faux fur company, Fabulous Furs, manufacture an artificial gorilla vest for surrogates to wear when taking care of little Gladys. The local company graciously provided the vests free of charge. “Helping animals is at the heart of everything we do at Fabulous-Furs and we’re long-time supporters of the Cincinnati Zoo’s animal conservation efforts,” said Donna Salyers, President of Fabulous Furs. “Fabulous Furs is known for the world’s finest faux furs and believing one of our fabrics might help make baby Gladys’ life easier made helping an easy decision. Now, as we share Gladys’ story with our kids and grandkids, their enthusiasm makes it even more meaningful. We’re absolutely thrilled to contribute.” 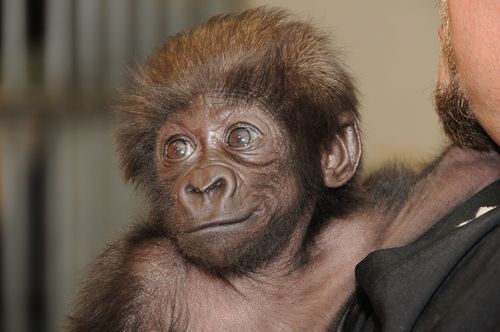 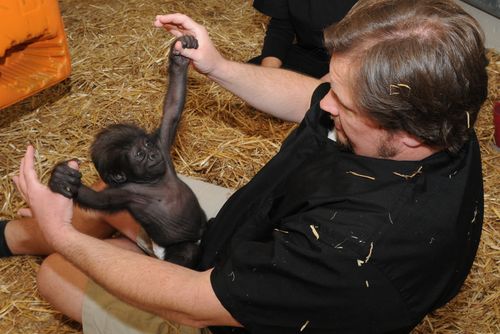 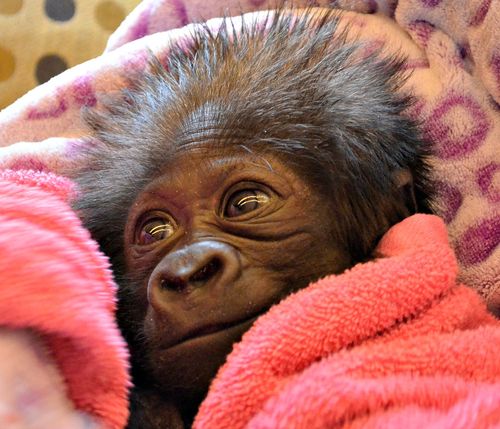 A four-week-old female Gorilla born at the Gladys Porter Zoo in Brownsville, Texas, made a cross-country trip on a private plane to her new home at the Cincinnati Zoo last week. 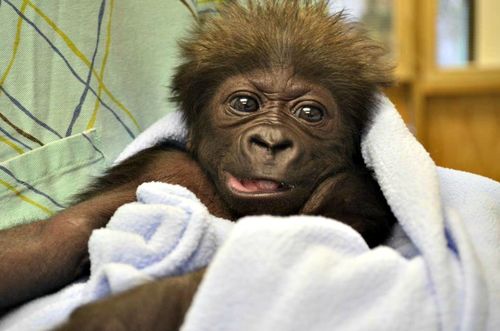 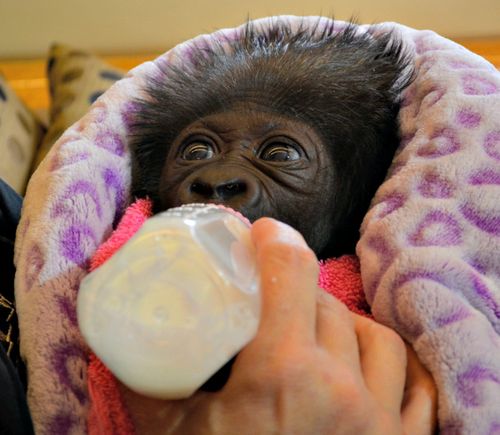 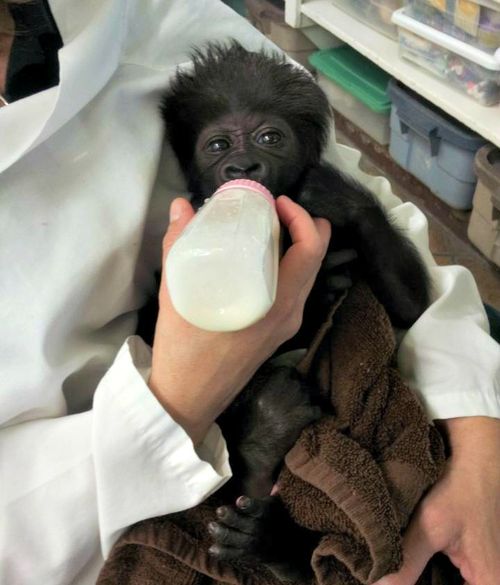 The baby, who is still unnamed, was born on January 29 to 14-year old female Kiazi and 28-year-old silverback male Moja.  Because Kiazi was not providing appropriate maternal care, the baby was being hand-reared by keepers at the Gladys Porter Zoo. All parties agreed that relocation was the best course of action for the baby and because the Cincinnati Zoo has two female Gorillas available to serve as potential surrogate mothers, it was decided that the baby should go there. Her introduction process to a new Gorilla troop will be gradual to ensure a favorable integration.

The baby will spend time behind the scenes for the next few days as she is evaluated by zoo veterinarians. She will then move to her more permanent home at the Cincinnati Zoo. 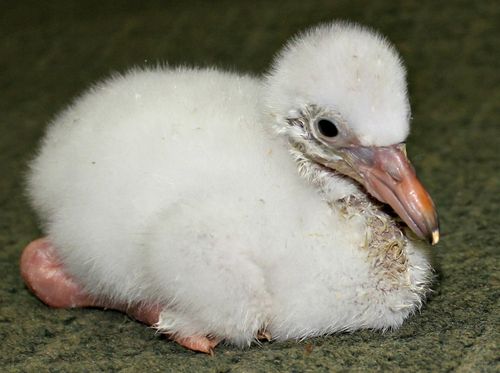 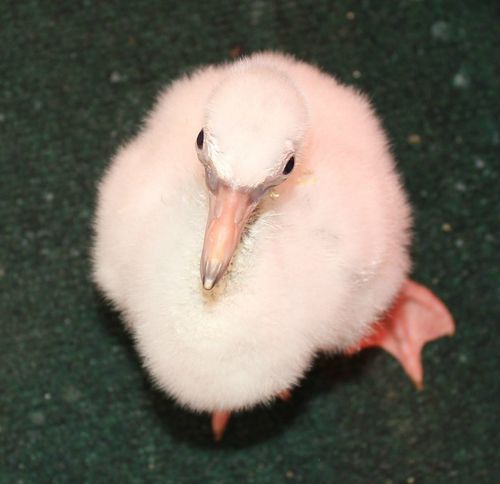 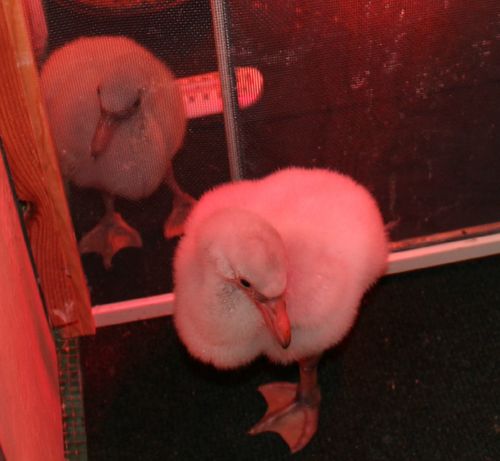 In early August, Jesse Olvera, Head Keeper in the Bird Department, traveled to Sea World in San Antonio to obtain the eight eggs that Sea World graciously donated to the zoo. The eggs were artificially incubated for 28-30 days under the watchful eye of the Bird Department.

Though the eggs arrived at the zoo together, the eggs were laid by different parents. Of the eight eggs, three hatched.

Flamingo eggs must be monitored closely due to their permeable shells. Humidity and temperature must be adjusted and checked regularly, and the eggs must be rotated every four hours to ensure a healthy hatching.

Flamingo chicks have downy grey feathers.  It will take roughly two years before they take on the light pink color of adult Flamingos. 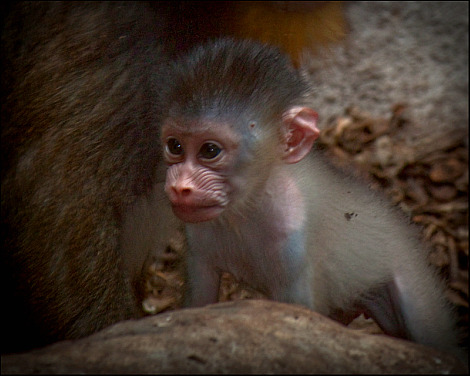 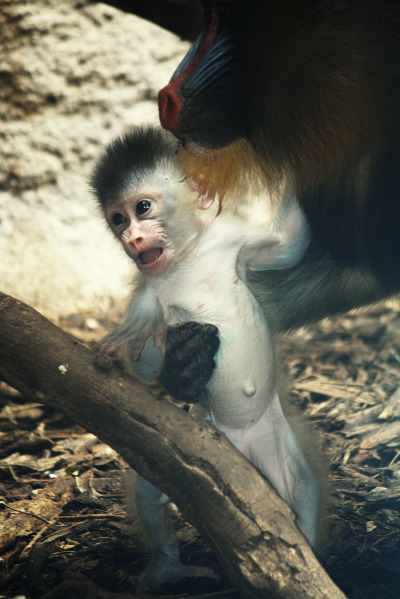 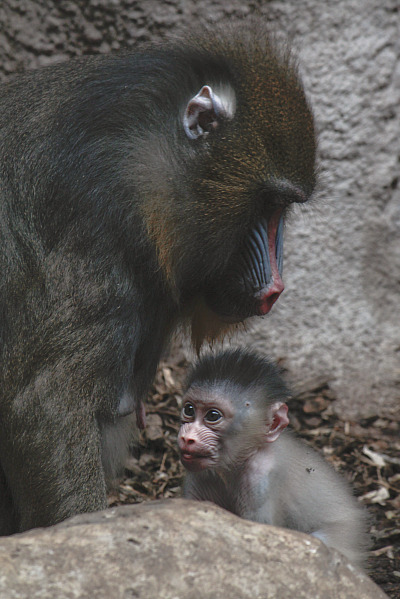