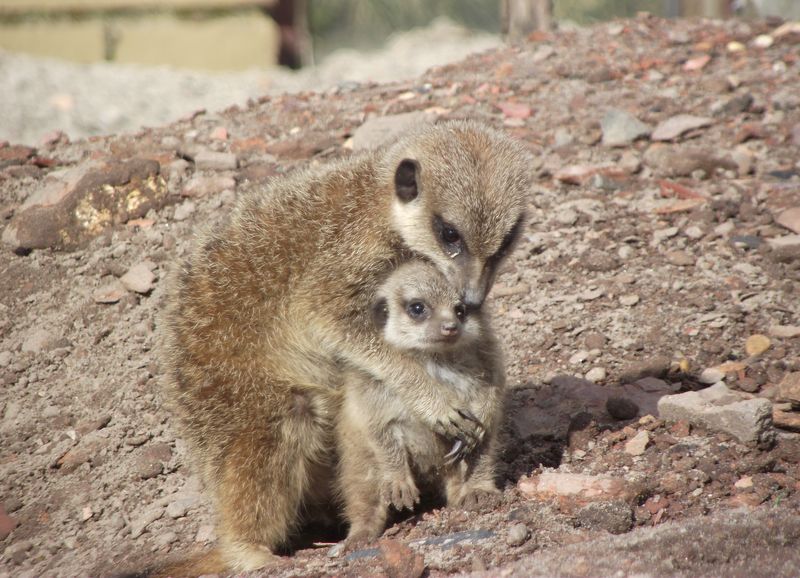 Last April, Five Sisters Zoo in Scotland was damaged by a terrible fire that not only destroyed their tropical house and 48 different species of small mammals and reptiles, but also the indoor meerkat house, killing 11 members of their meerkat family.

At the beginning of November, keepers saw two meerkat kits emerge from the burrow – a true sign that the remaining meerkat pair had fully recovered from their trauma.  November in Scotland was not an ideal time to have young, but they are such resilient creatures that the babies have thrived ever since.

Two weeks ago, two more kits emerged from the burrow, much to the delight of all the staff at the zoo! 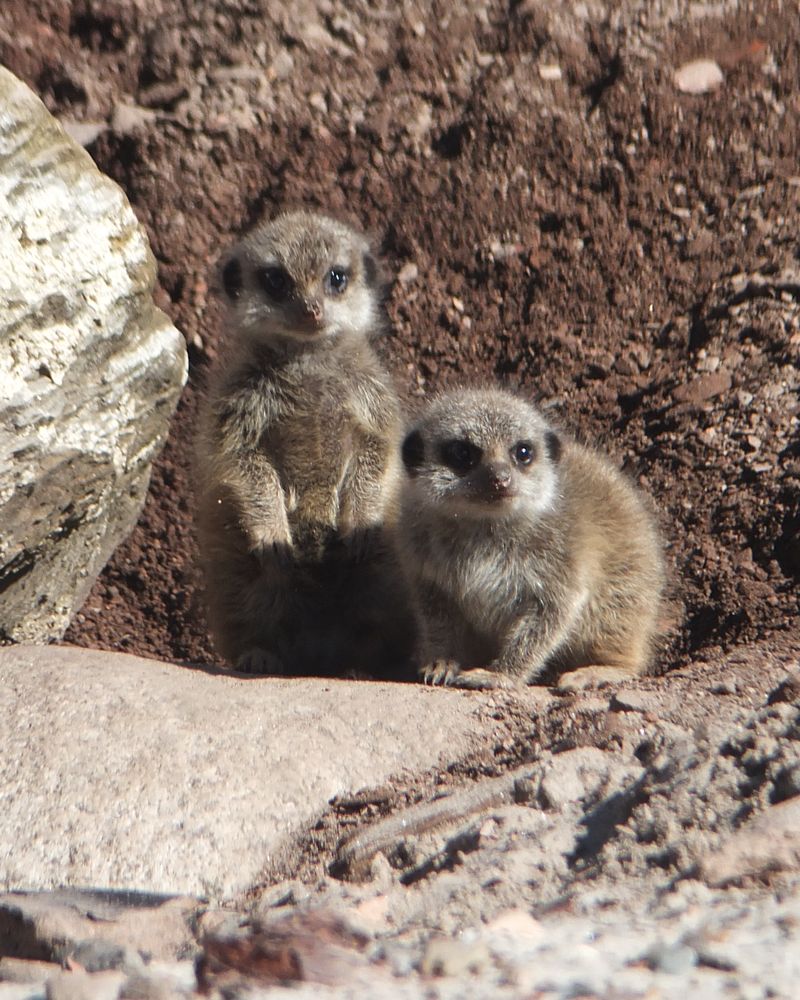 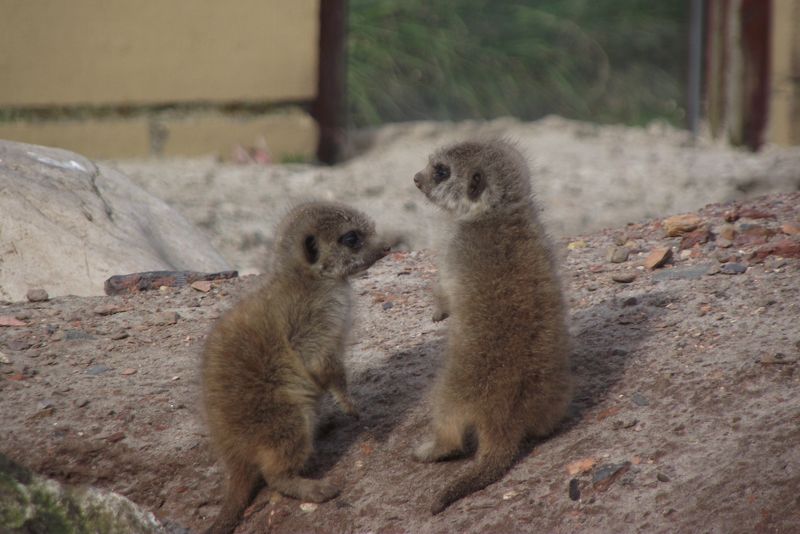 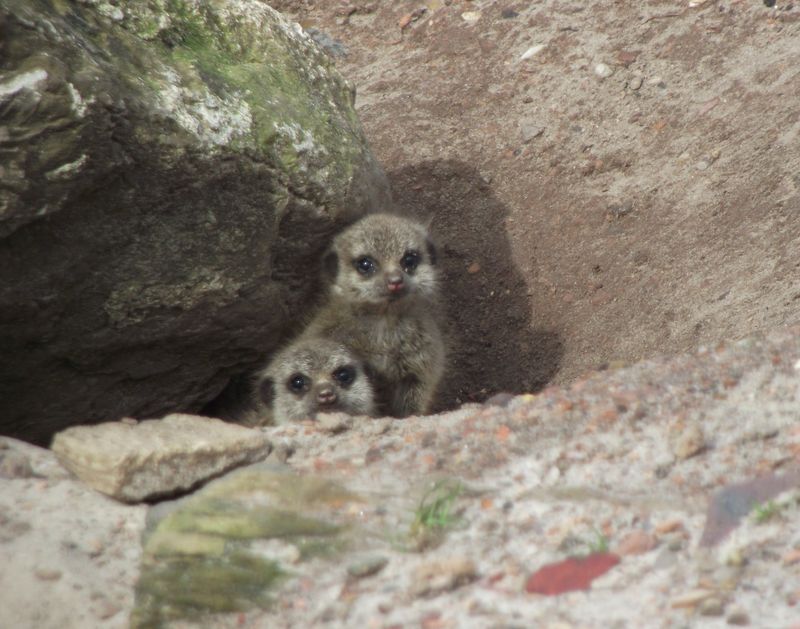 Before the two additional kits made their appearance, a FaceBook appeal for name ideas generated hundreds of suggestions. The two most popular names were chosen: Alex, named for one of the first firemen on the scene at the zoo (who is also their postman by day), and Poppy, the flower of Remembrance Day, when the two pups emerged. The new additions have yet to be named.

A new home for the meerkat family is nearly complete. It is located beside the site for their tropical house and will also house two porcupines and a new giant African Spurred Tortoise called Chad, who is 31 years old.  The meerkats should move into this new habitat within the next couple of weeks.

For more photos, see our story about the first two kits. 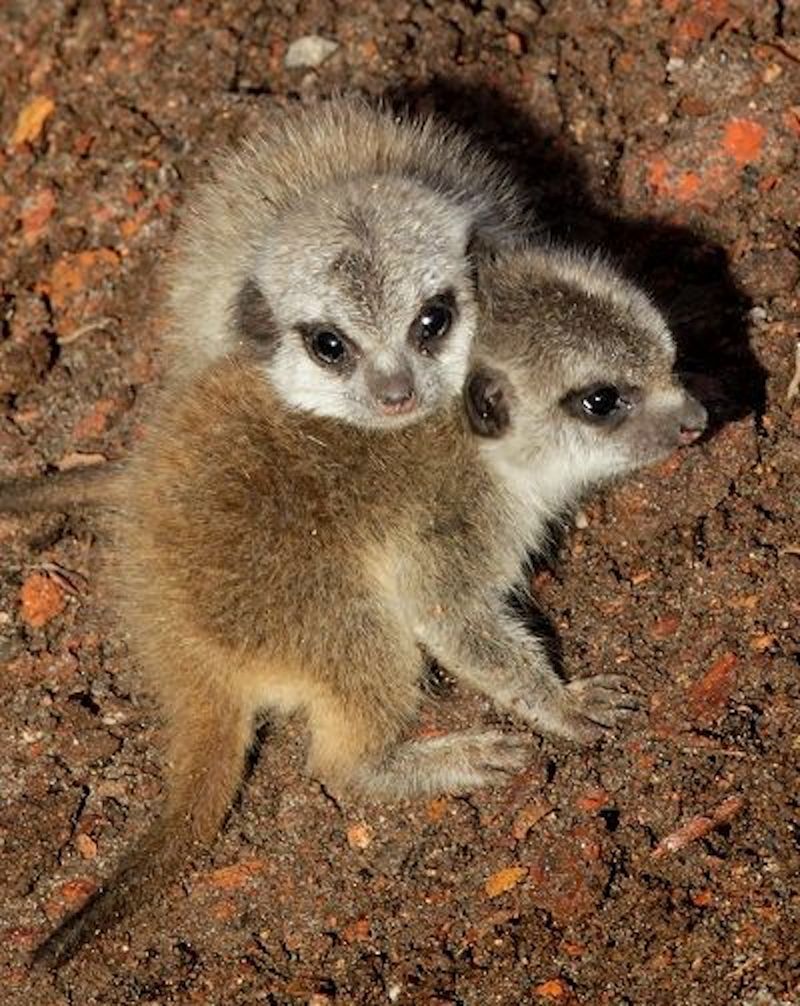 Five Sisters Zoo in Scotland is celebrating the birth of two baby Meerkats. The pups made their first public appearance on November 12, at two weeks old. It is especially good news after the damaging fire that occurred at the zoo in April. Meerkat mom, Annie, suffered burns on her face but has made a great recovery, and is now settled and content with her two new babies and her mate, Phoenix. It is wonderful to see the zoo's Meerkat family growing!

Five Sisters Zoo is looking for name ideas. You can submit your suggestions at the Zoo's Facebook page. (Bear in mind that keepers aren't sure what sex the two babies are yet!)

Click here if you would like to make a donation to the zoo's Fire Fund, to help them rebuild and recover. 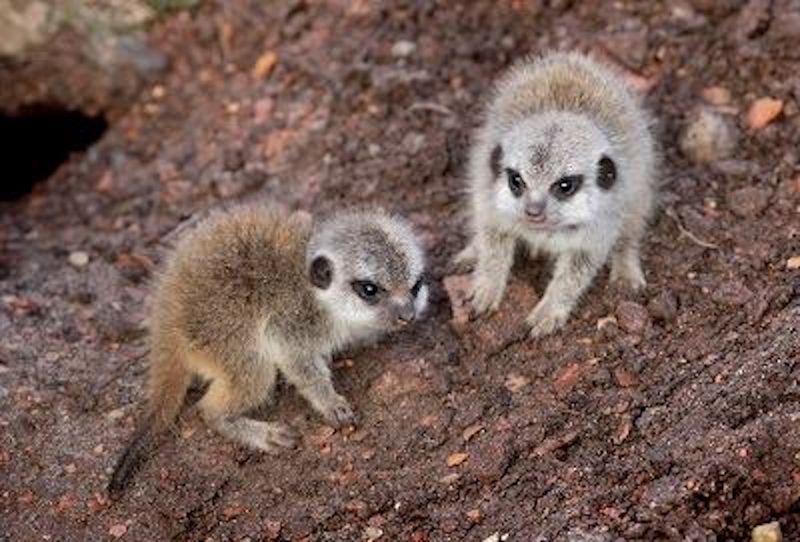 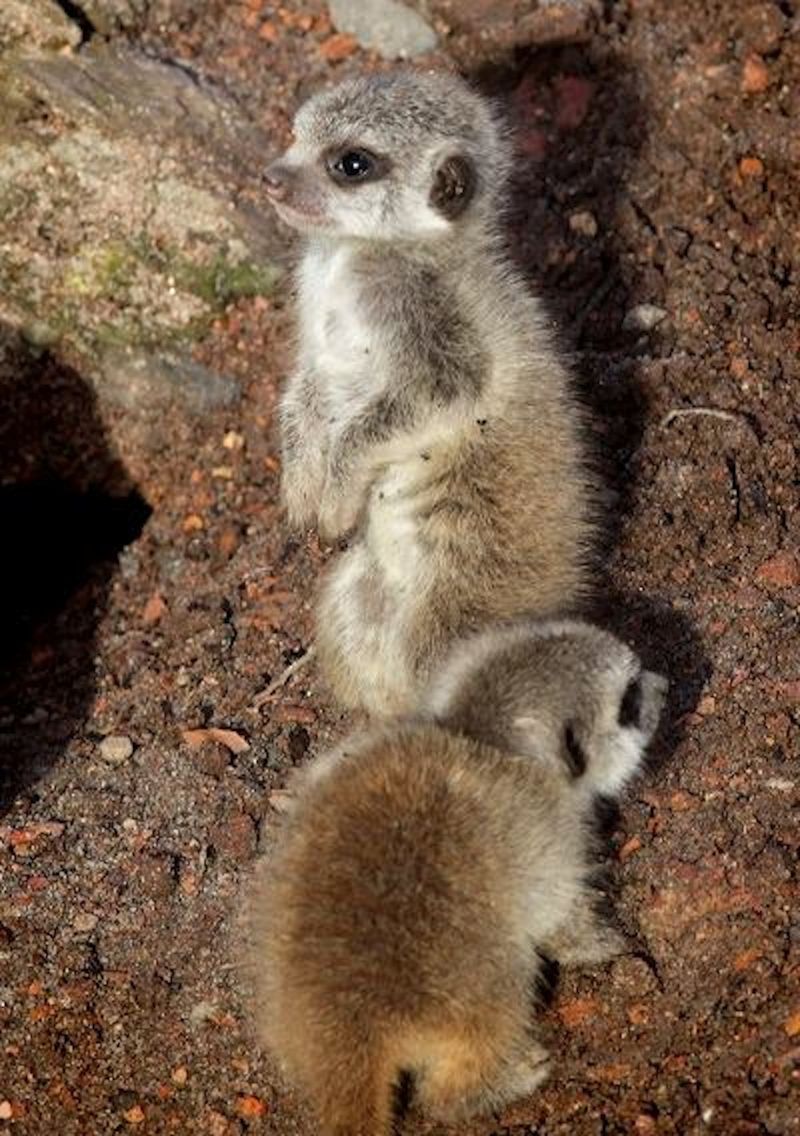 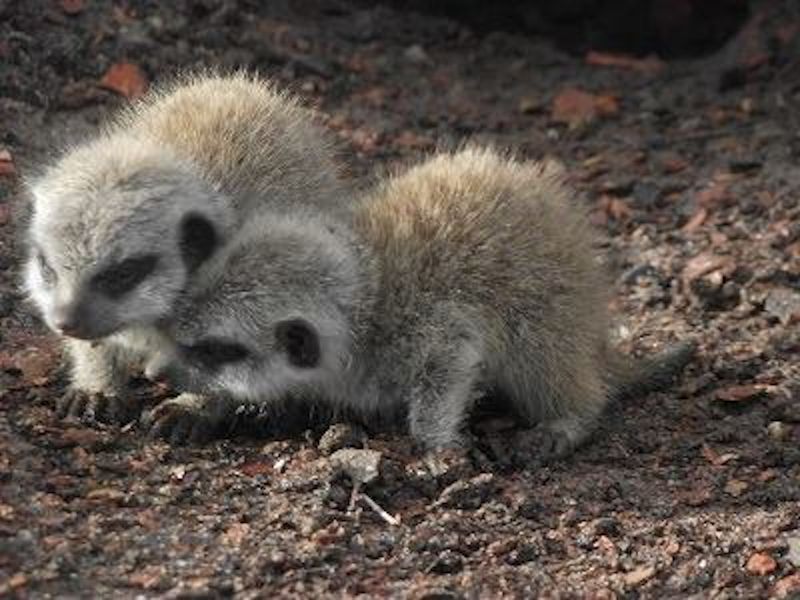 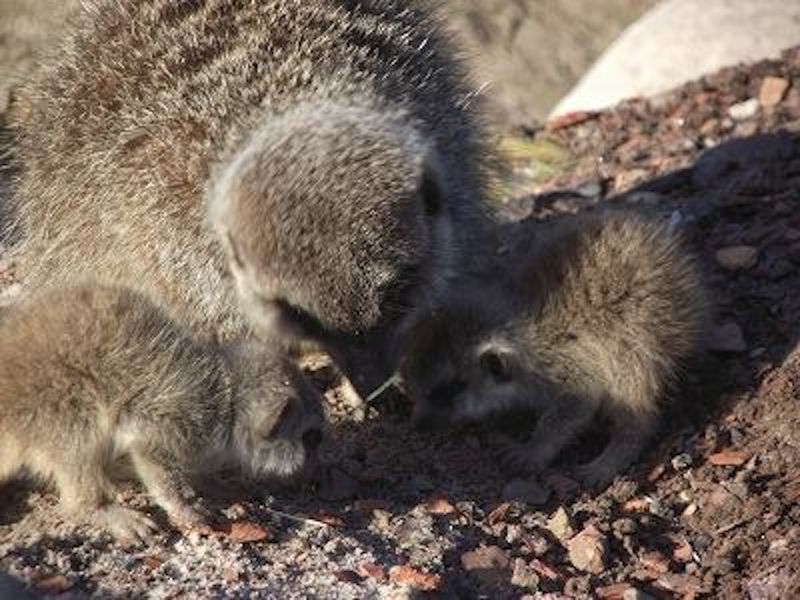 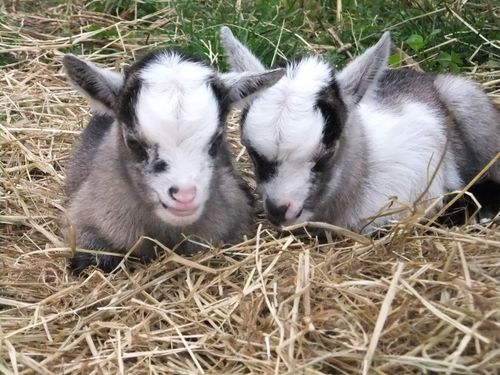 Two Pygmy Goat kids are outside enjoying the warm weather at Five Sisters Zoo in the UK! And more are on the way: another female goat, Molly, is heavily pregnant, with zookeepers expecting her to give birth any day now. Pygmy Goats, often kept as pets as well as for their milk,  are a breed of domestic goat originating from wild goats of West Africa. 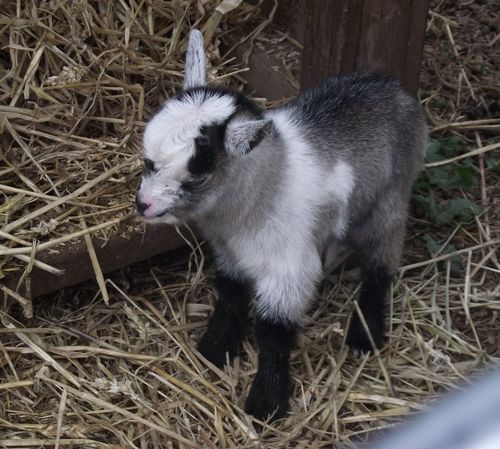 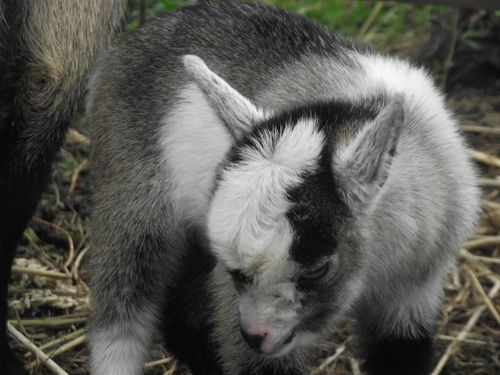 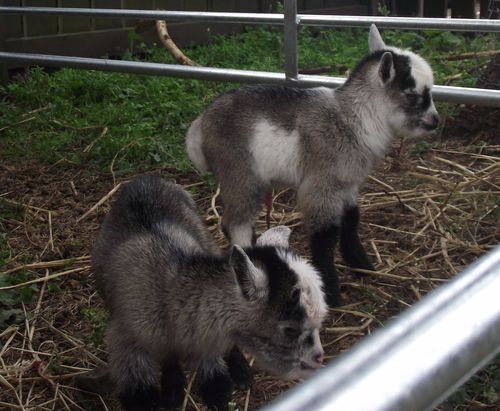 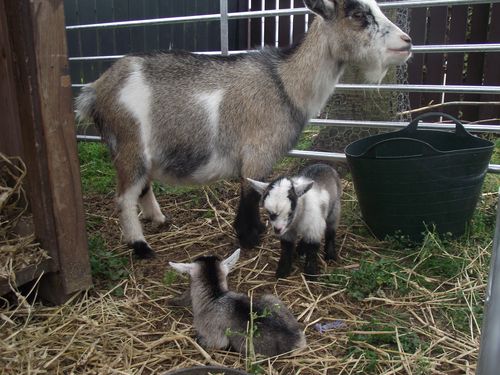 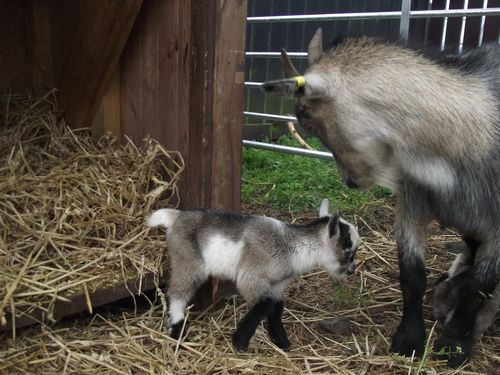 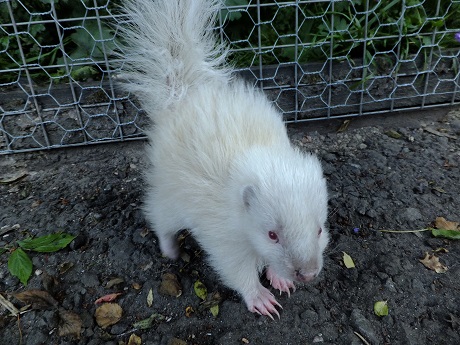 Caretakers at Five Sisters Zoo in Scotland weren't expecting any baby Skunks— but one turned up in their Skunk exhibit on June 4. Later that day they found an even bigger surprise: the second kit to appear was an albino. They believe that the parents are Stella, one of two regular black and white females, and the father is Strachan, an albino. The albino kit has been examined and identified as a female; the other kit has been a bit more elusive and hasn't been checked out yet. The kits are pictured here at three weeks old.

Life has not been so easy for Strachan. As an albino, his eyes are weak and he has a poor immune system, leaving him vulnerable to common diseases. With his pale coloring, he sunburns easily. The albino kit will encounter the same difficulties. It's likely that the albino Skunks would not have survived in the wild. The normal black and white markings help to warn predators that a foul-smelling fluid may be squirted at them should they get too near. 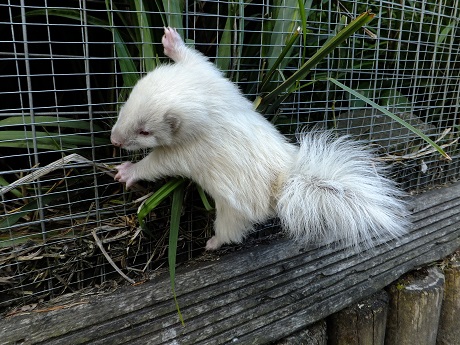 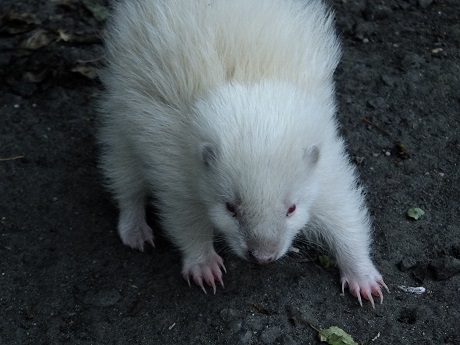 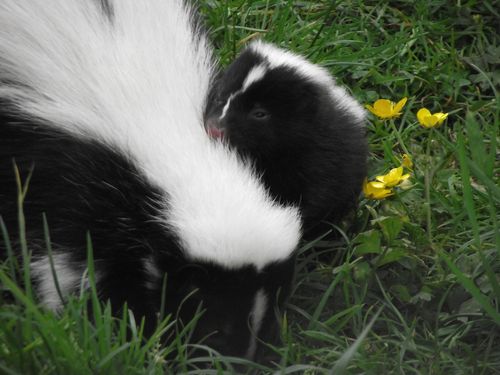 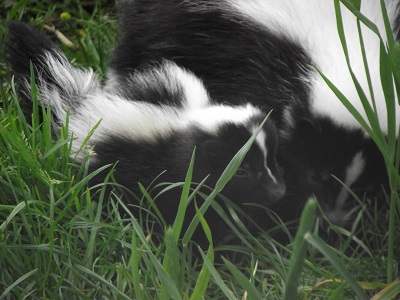