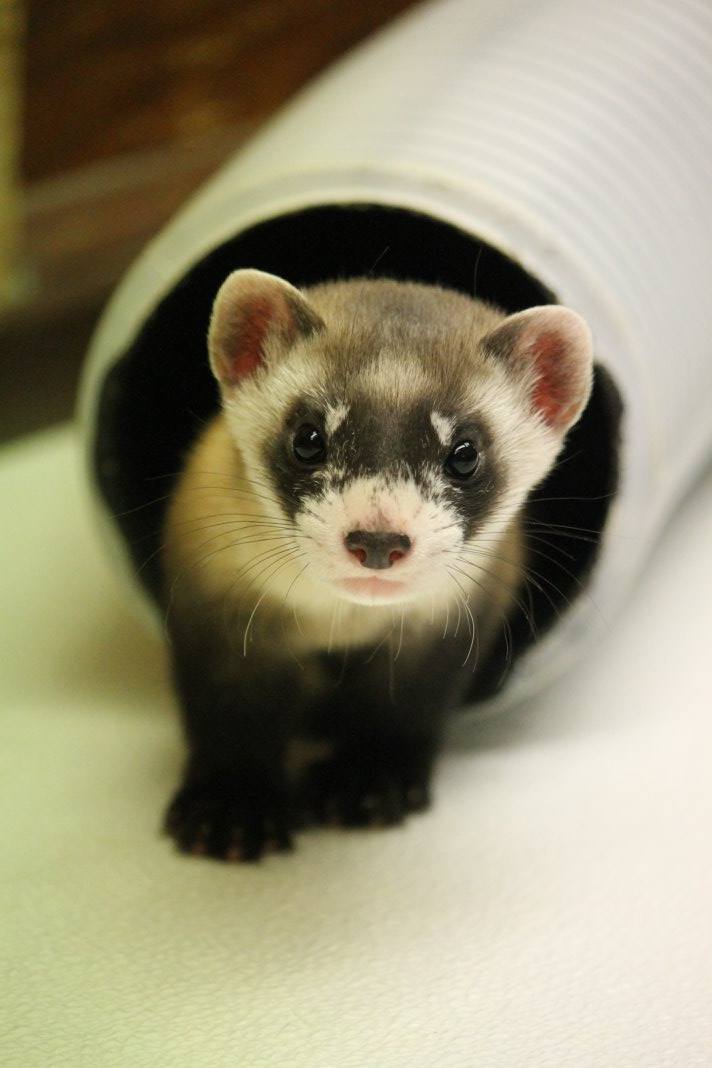 Toronto Zoo has been participating in the conservation-breeding program for the Black-footed Ferret since 1992. Since then, the Zoo has bred hundreds of baby ferrets (kits) for reintroduction to the wild in USA, Mexico, and Canada where they were listed as extirpated in 1978.

“The black-footed ferret was once thought to be extinct in the wild. Saving species at risk, like the Black-footed Ferret, is only possible through partner collaboration and the success of international ferret recovery demonstrates how working together can have a big impact on saving critically endangered species,” says Maria Franke, Curator of Mammals, Toronto Zoo. 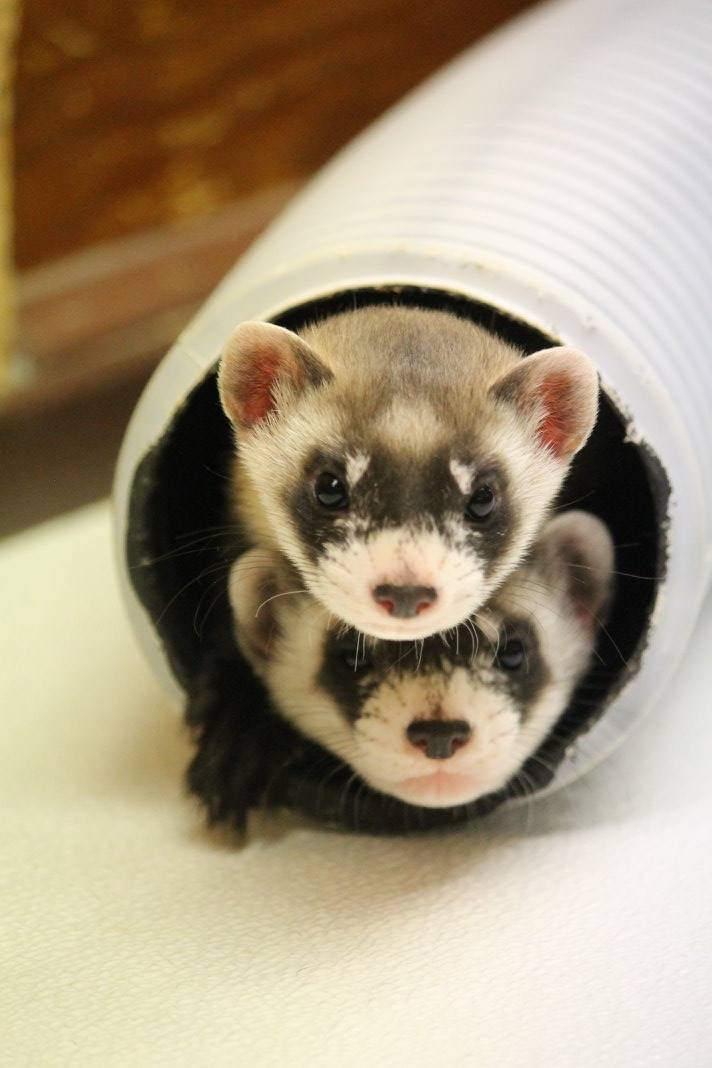 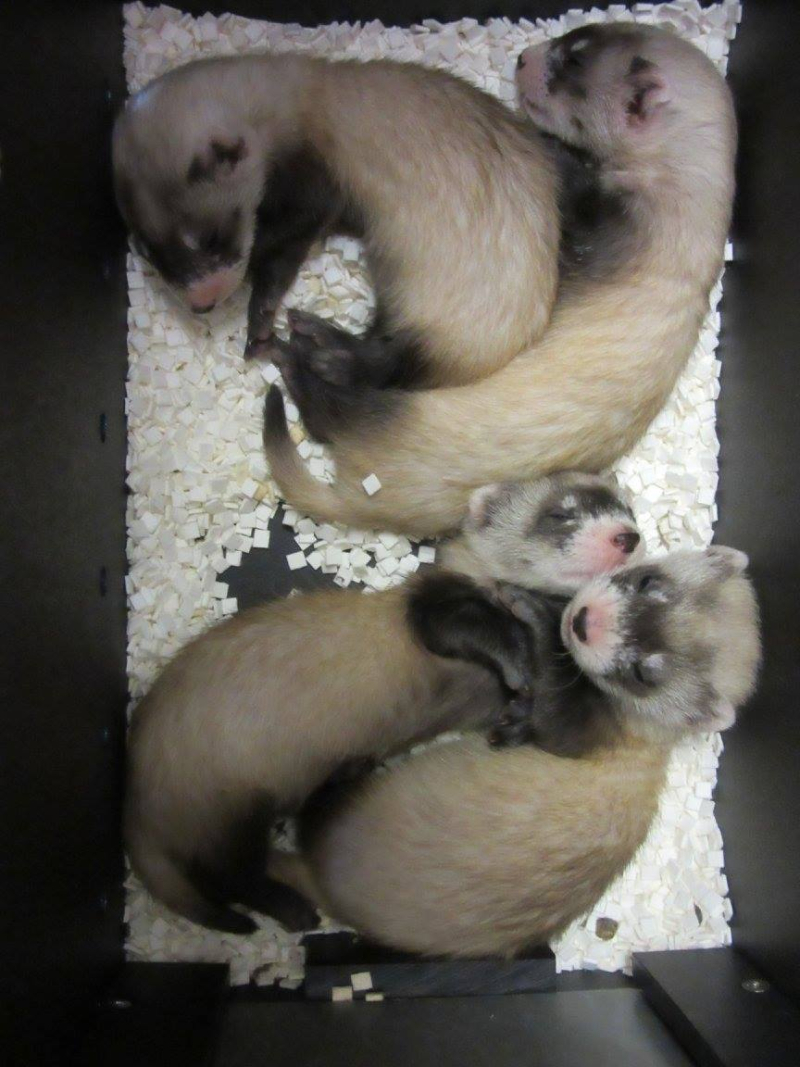 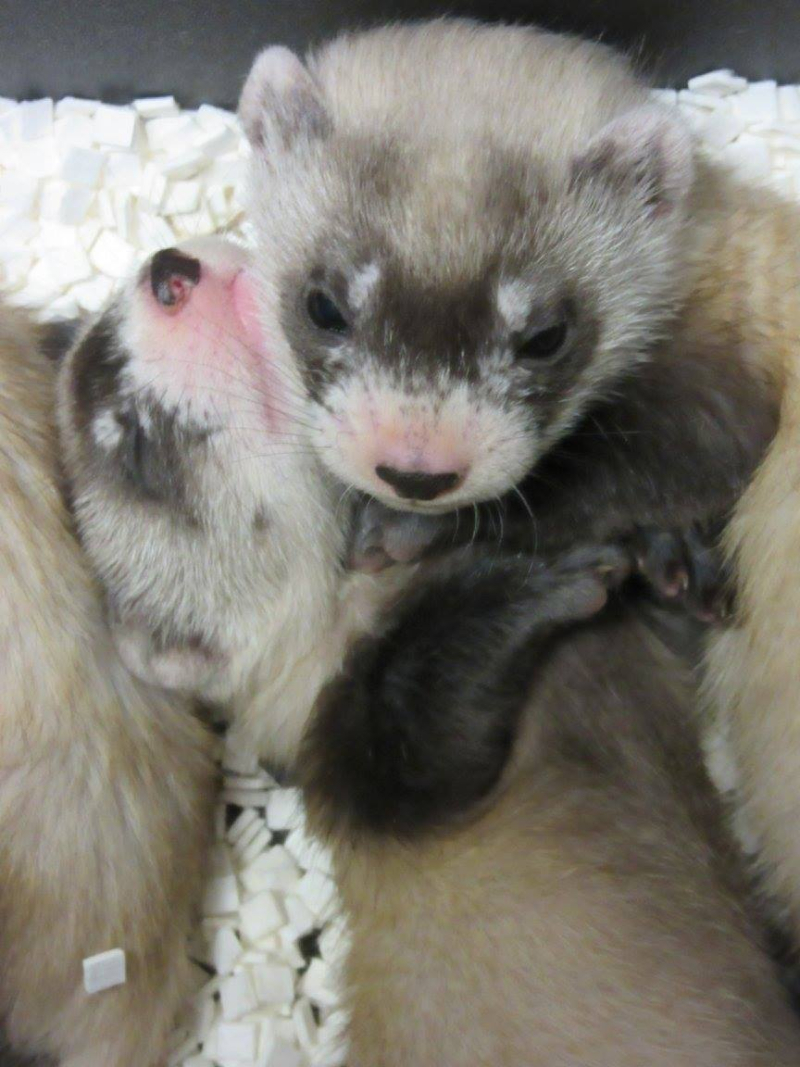 This year, Toronto Zoo has 16 adult ferrets. One female, named Twilight Sparkle, after a My Little Pony character, gave birth to four kits (three males and one female) on April 16, 2016.

Kits are born blind, hairless, and are less than 10 centimeters long. Twilight Sparkle was instantly a very good first-time mom, nursing and protecting her babies. The kits weaned at approximately 30 days of age and started eating meat brought over by Mom. A week or so after weaning, their eyes started to open and they began to explore their surroundings.

Now, at almost three-months-old, their personalities are strong and they are very active and chatty. The kits recently had their first veterinary exam and are all healthy, with beautiful adult colors. They are full-grown and the boys weigh more than Mom. Adult females weigh 700-800 grams and adult males 900-1,000 grams.

On June 13, 2016, another female, named Indigo, gave birth to six kits (unfortunately, two were stillborn). Mom and her four kits have been doing very well. Now, at almost one-month-old, they have grown quite a bit, have white baby fuzz, and are even squirmier.

Four other females bred this year; three did not become pregnant. The remaining female, named Fiddlesticks, gave birth on June 22 to one kit.

Females can have between one and seven kits, with an average litter of three to four, so this is a small litter but not uncommon. Fiddlesticks is an experienced mom and not bothered by a single noise in the barn. She has been caring for this kit just as well as she did for her four kits last year.

In the fall, kits will go to the National Black-footed Ferret Conservation Center, in Colorado, to prepare for release into the wild. They will live in outdoor pens and learn valuable skills, such as hunting prairie dogs.

Toronto Zoo is proud to be part of this successful program, which has helped restore the wild population to approximately 300 animals. However, the ferret continues to need help as they face habitat loss and disease.

Black-footed Ferrets Get a Boost From Science 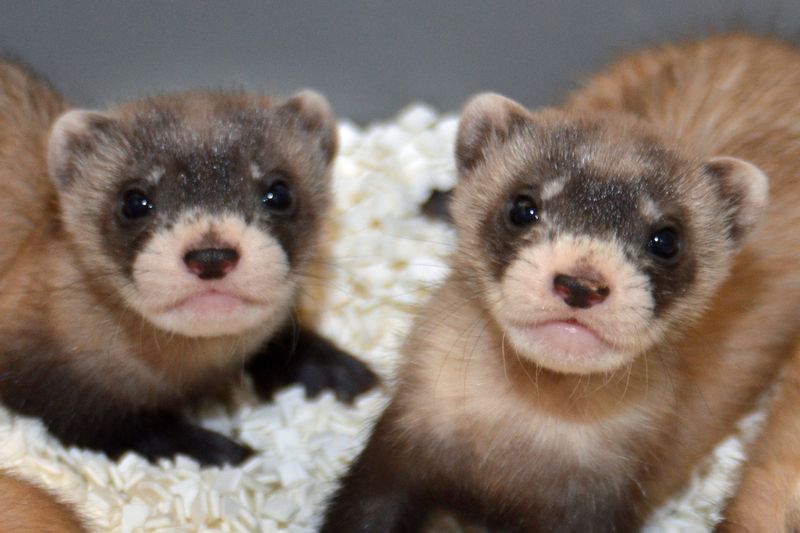 These Black-footed Ferret kits born in 2015 are more than cute -- they represent a breakthrough for this critically endangered species that could benefit rare animals around the world. 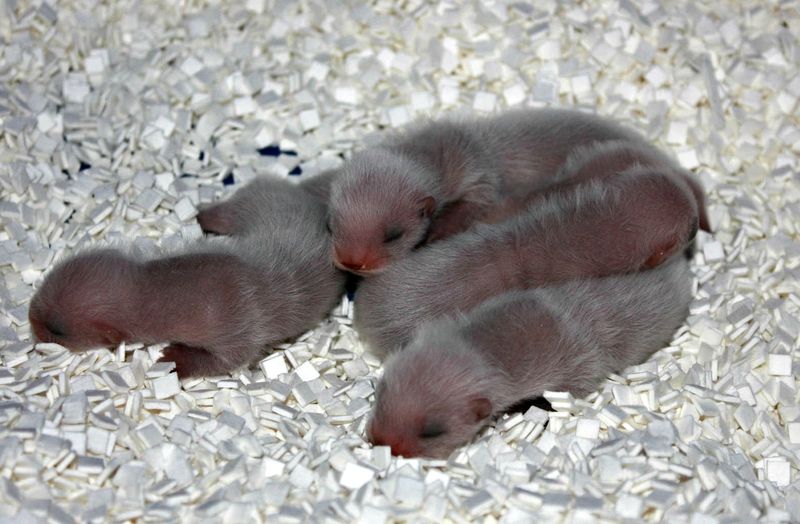 In 1981, scientists found only one small wild population of Black-footed Ferrets in Wyoming.  Wildlife organizations, including zoos, have since brought this critically endangered species back from just 18 individuals to more than 2,600 in the wild today.  This summer, the Smithsonian Conservation Biology Institute (SCBI) broke the genetic bottleneck facing the species by using semen that had been cryopreserved for 10 to 20 years to artificially inseminate live female ferrets. This breakthrough will increase the number of black-footed ferrets born in human care while enhancing genetic diversity within the species.

Initially, scientists used fresh semen to artificially inseminate females who failed to naturally mate with males, resulting in 135 kits. With just a few founders to rebuild an entire species, early managers of the Black-footed Ferret recovery program knew that genetic diversity could be lost. Loss of genetic variation can lead to increased sperm malformation and lower success of pregnancy over time. Researchers routinely collected and preserved Black-footed Ferret semen for later use as part of standard operating procedures.

Continue reading "Black-footed Ferrets Get a Boost From Science" »

As a holiday gift to ourselves, ZooBorns recently commissioned a stunning piece of performance art from the Painting Ferrets. We selected the "super polka" soundtrack for better and worse. Enjoy!

And remember, if you're looking for a holiday gift for yourself or an animal lover in your life, check out ZooBorns: Cats!, our original ZooBorns or our kids book ZooBorns!. Wow... that gets kind of confusing... They are all right here. 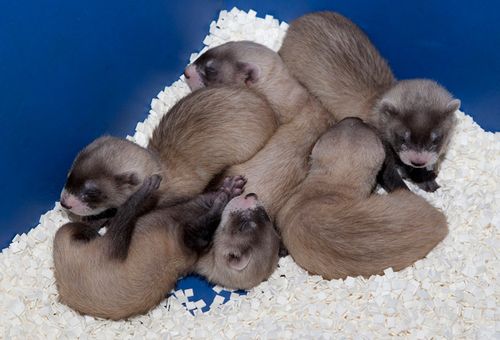 The Black-Footed Ferret, once thought to be extinct in the wild, was rediscovered in 1981 with a small population of 24 animals in Wyoming―30 years later the species’ future is brighter than ever. The Smithsonian Conservation Biology Institute is marking this anniversary with a record-breaking year―50 surviving Black-Footed Ferret kits were born at the Zoo’s Front Royal facility this year, helping to bolster the population of North America’s sole ferret species. Today more than 1,000 ferrets exist in the wild as the result of a successful reintroduction program at six breeding institutions, including SCBI. (For extensive information about SCBI’s success breeding the Black-footed Ferret, visit the Zoo’s Black-Footed Ferret press kit.) 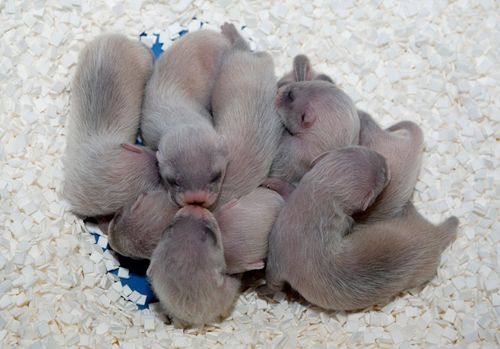 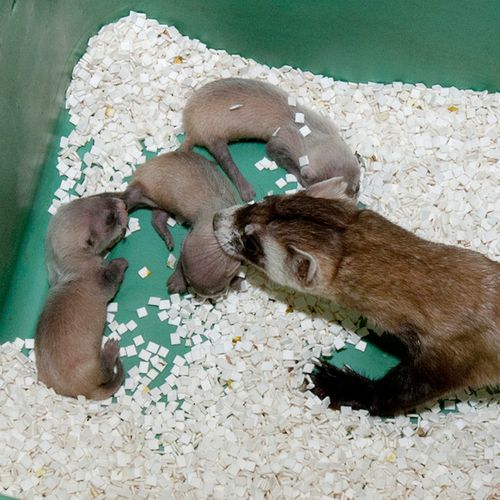 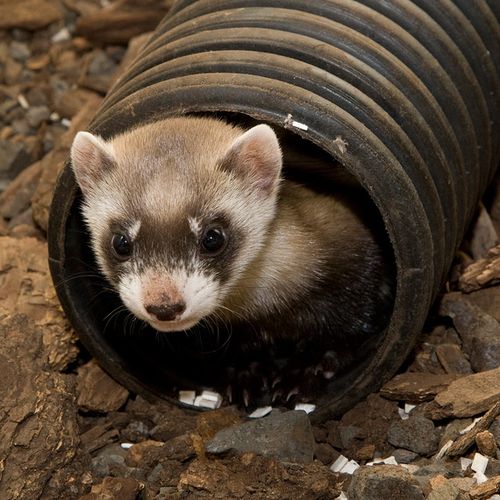 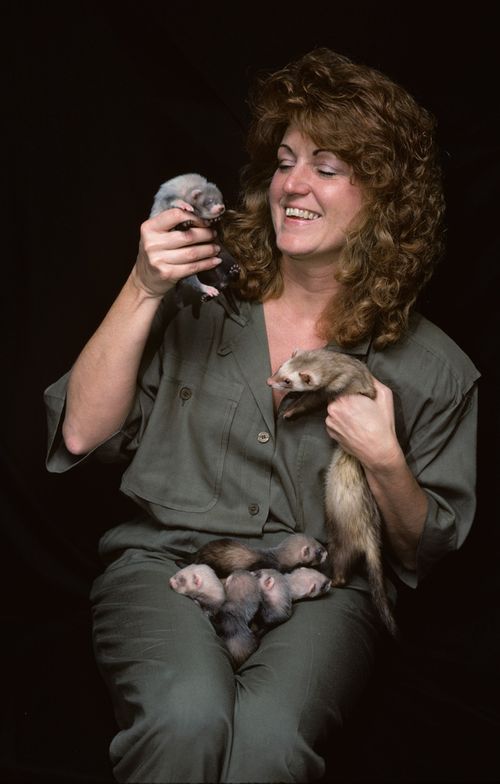 Above, Dr. JoGayle Howard holds ferrets resulting from artificial breeding in 1988. Below, Howard with pups born in 1997. 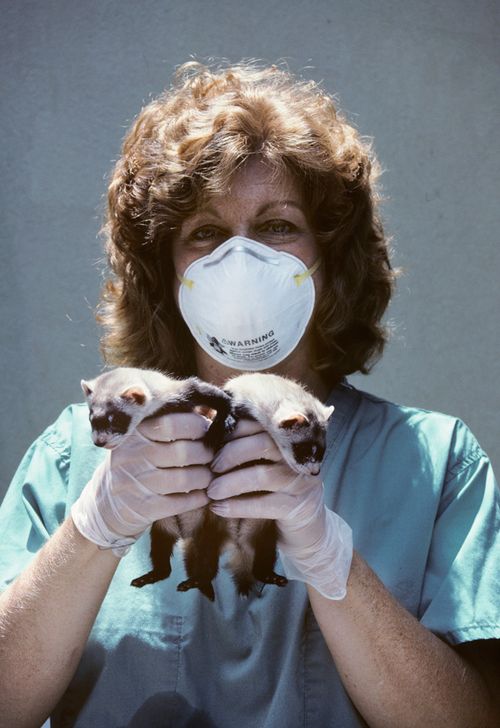 Once believed to be extinct, Black-footed Ferrets have had a banner year for breeding at the Smithsonian’s National Zoo’s conservation facility in Front Royal, Va. Twelve litters of black-footed ferrets have been born at the Smithsonian Conservation Biology Institute since May 7, including litters born to four females who have never before had kits. 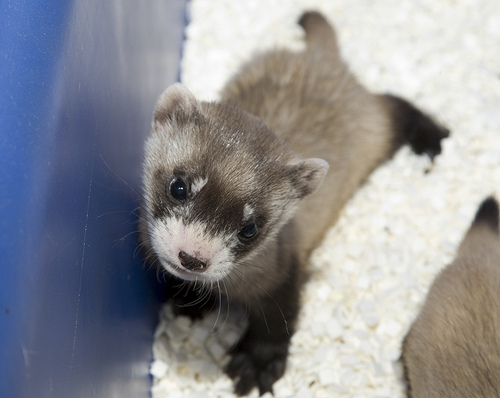 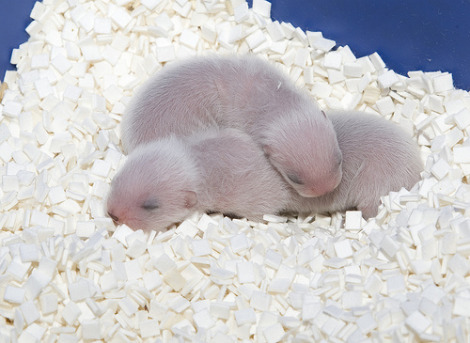 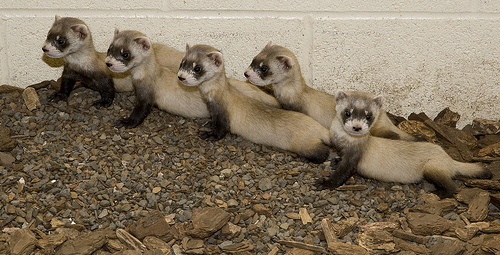 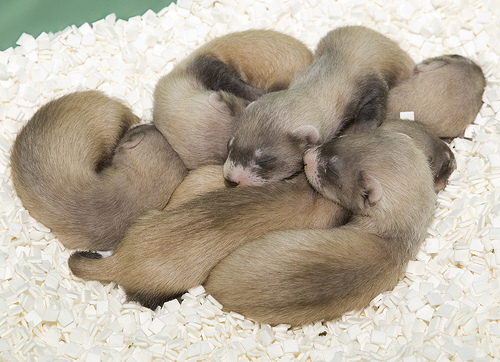 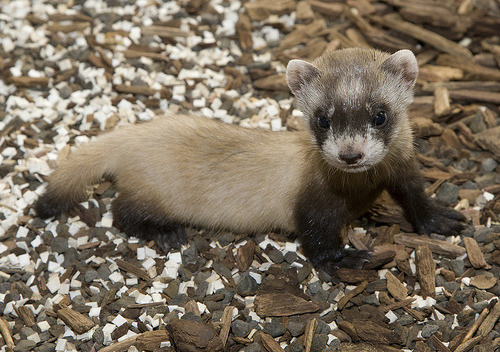 Read more below the fold:

When polecat mother 'Moonshadow' gave birth to 10 tiny pole pups earlier this month, keepers at the UK's Shepreth WIldlife Park were astonished. The European polecat is the ancestor of the domesticated ferret. In the wild, polecat moms usually have just four to six young per litter. The bountiful birth, part of a captive breeding program, is great news for conservation efforts too. All ten will be released back into the wild in the fall. Polecats were hunted to near-extinction in England during the 19th century. While the animals are good at hunting rats and rabbits, which are usually seen as pests by farmers, they were ruthlessly culled to protect game bird estates. 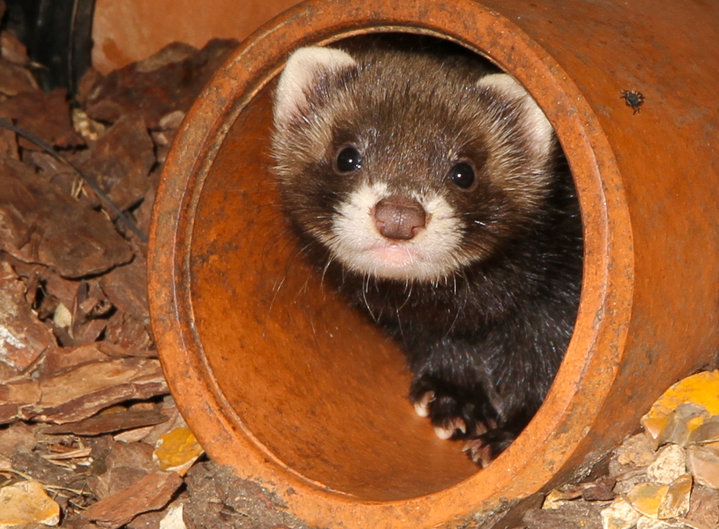 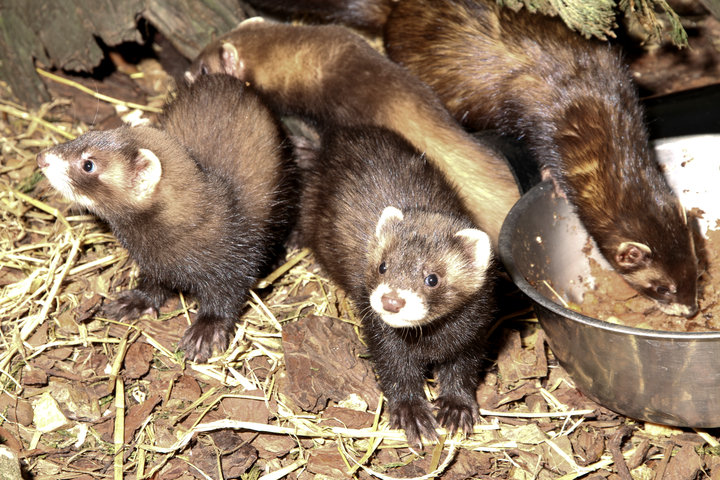 If there's a winter storm brewing where you are, make like a fisher baby and cuddle up for warmth. Born at the Minnesota Zoo, these little siblings are perfectly paired. In the wild, fishers raise their young in cozy dens made from rocks, roots, or other found shelter. 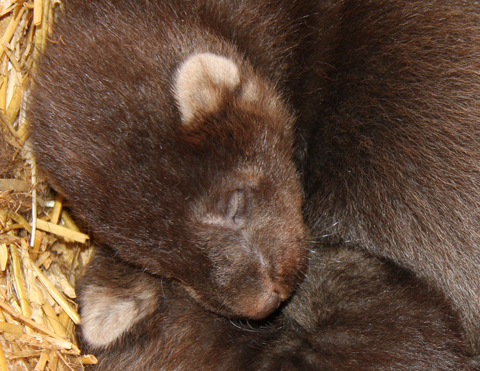 A two week old black footed ferret in its nesting box at the National Zoo’s Conservation and Research Center in Front Royal, Va. on July 3, 2008. 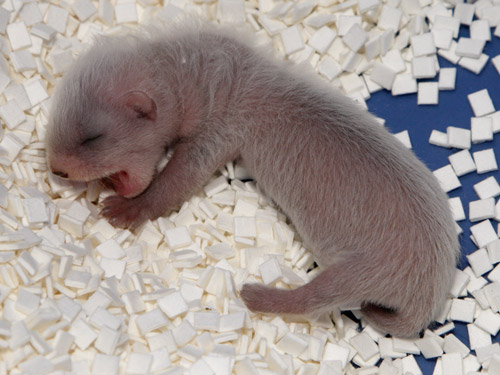 A two month old black-footed ferret (right) with its mother at the National Zoo’s Conservation and Research Center. 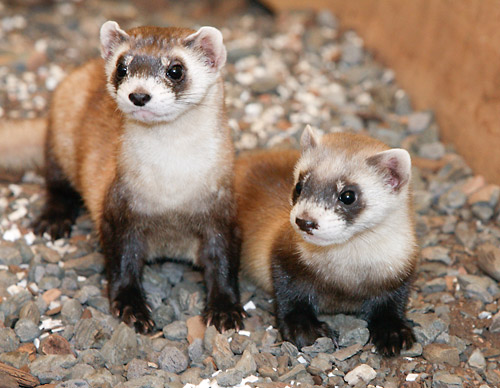